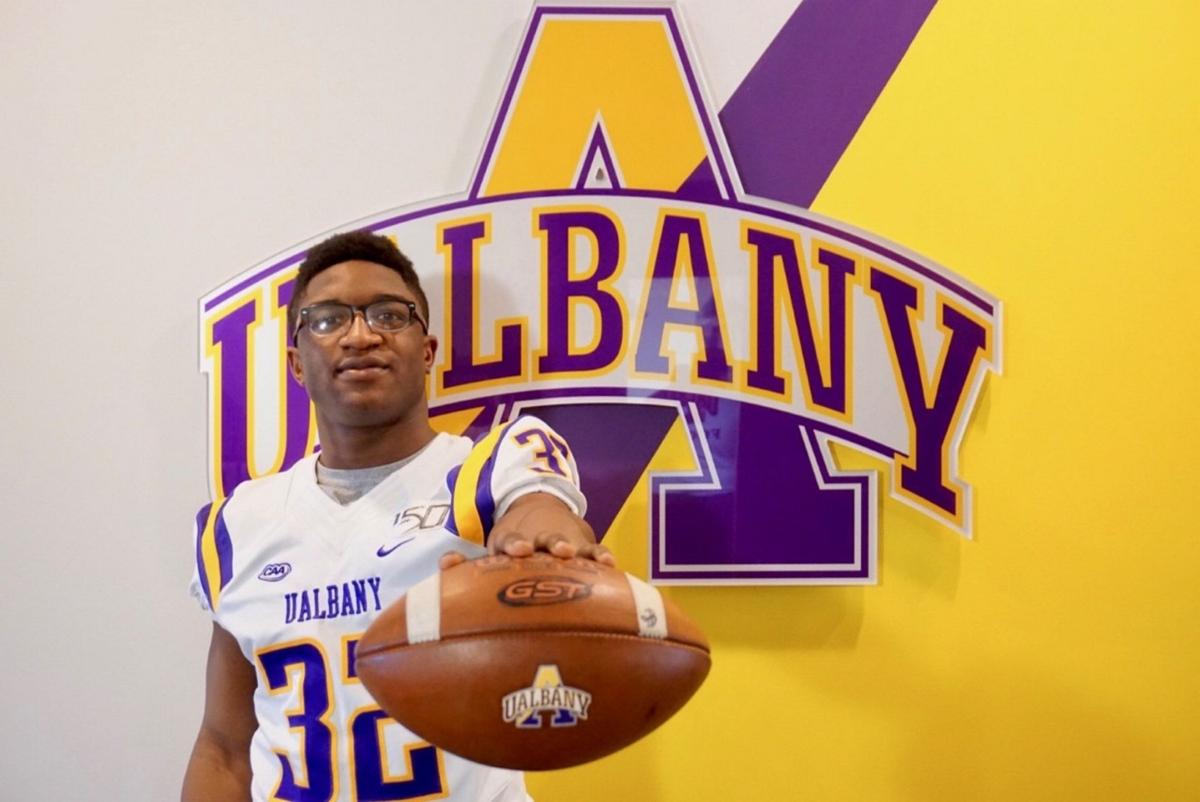 Carthage’s Fombo Azah poses at the University of Albany during a campus visit. Azah will attend the college next year and walk on to the football team. Provided photo 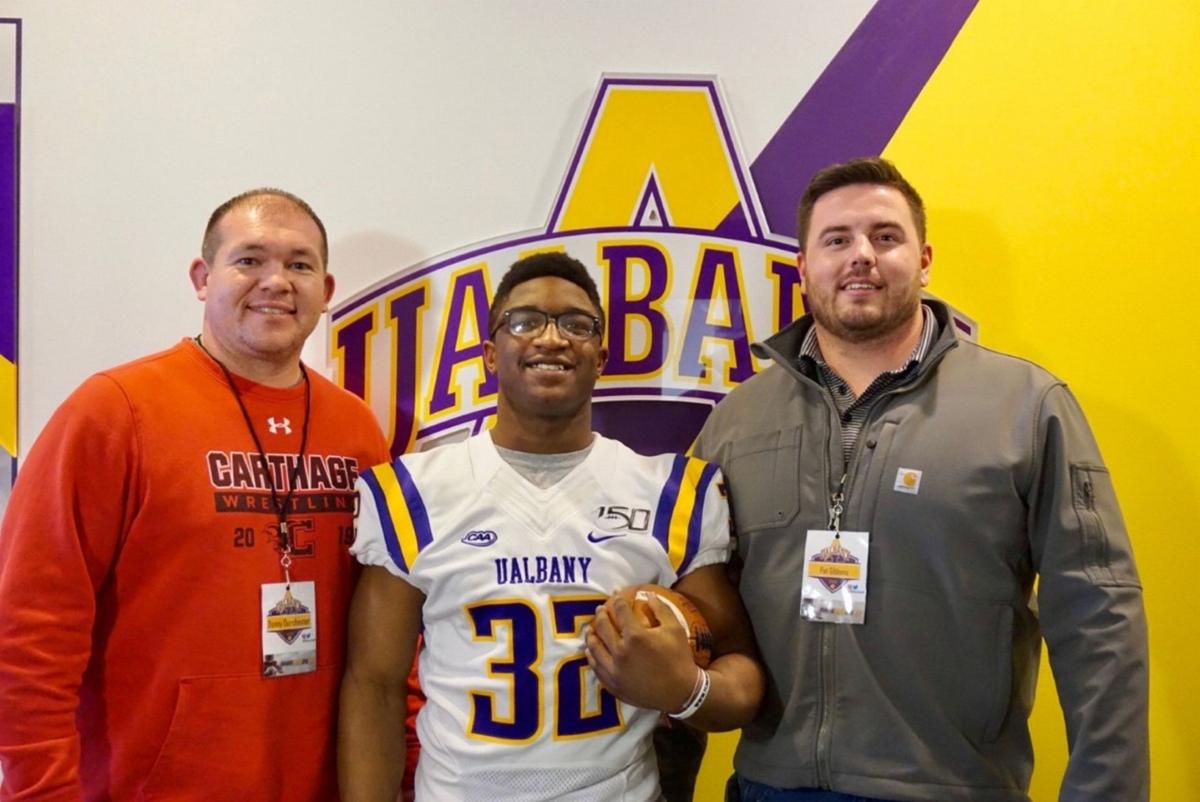 Fombo Azah joins Carthage coaches Don Dorchester, left, and Pat Gibbons during a visit to the University of Albany in February. Provided photo 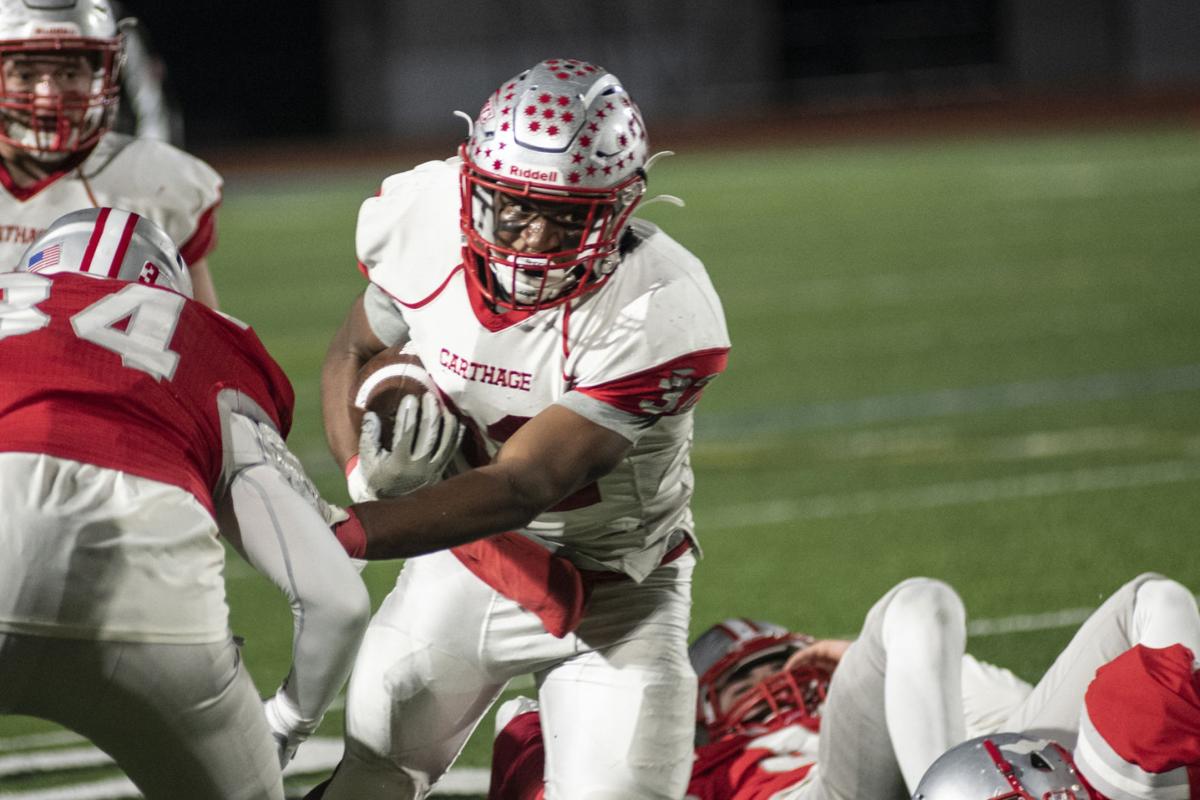 Carthage’s Fombo Azah poses at the University of Albany during a campus visit. Azah will attend the college next year and walk on to the football team. Provided photo

Fombo Azah joins Carthage coaches Don Dorchester, left, and Pat Gibbons during a visit to the University of Albany in February. Provided photo

The day before the state wrestling championships at the Times Union Center in Albany, Carthage’s Fombo Azah, along with his coaches Pat Gibbons and Don Dorchester, took the 10-minute trip across the city to University of Albany’s campus.

Azah, the running back who helped lead Carthage to a state championship game last football season, had been looking at the school for a while and after he sent his film to the school in December, an appointment to visit was set up for late February.

Will Fiacchi, Albany’s recruiting coordinator, showed Azah the campus, including the football facilities. Azah had the opportunity to shake hands with some of the players as he passed through the weightlifting room, filled with athletes keeping in shape.

The team couldn’t offer Azah a scholarship, as there were none for the current recruiting class remaining. But they told Azah that if he got accepted to the school, he could join the team as a walk-on and possibly earn a scholarship the following year.

A few weeks ago, Azah received his acceptance letter and made his decision. He wants to be a Great Dane.

“The campus felt really nice, they got new turf at the stadium as well,” Azah said of his visit. “They told me about how they have study groups and how it’s mandatory to volunteer at soup kitchens and I thought that stuff was nice. All the coaches I talked to seemed like really nice coaches and that they know what they’re doing, which I believe they do. They have a pretty good team.”

Azah may not see the field much at first. Albany is currently set up with Karl Mofor who rushed for more than 1,200 yards for the Great Danes last season. A junior last season, Mofor was also named to the All-Colonial Athletic Association first team.

Azah got to meet Mofor when on his visit. Having played a backup running back role at Carthage for a few years before breaking out in his senior year, Azah is comfortable with observing more than playing at first.

“I understand that completely, but still freshman year, I’m trying to see the field at least once or twice a game,” Azah said. “I’m not just trying to be completely useless, but I know I’m going to have to watch the game from the sideline for a little bit.”

Azah hopes he’ll get the chance to show what he can do on the field. In his senior year at Carthage, he ran for 2,552 yards and scored 36 rushing touchdowns in 13 games.

Albany is a Division I team that plays at the Football Championship Subdivision level in the CAA. Conference opponents include James Madison, Villanova, Delaware and Maine. Azah’s teammate at Carthage, kicker Casey Farrell, signed to play football at Maine in early February. The two teams are scheduled to meet this year in Orono, Maine on Nov. 7.

Albany finished 9-5 last season and will play a challenging schedule again in 2020 that features a matchup against one Football Bowl Subdivision team, UMass.

Azah will study psychology at Albany. Despite the process to sign on with a team, and enroll at a school taking longer than anticipated, Azah is grateful to have the opportunity to pursue academic goals while also being able to continue to play football.

“I’m still thankful that everything worked out, I just knew patience was needed,” Azah said.