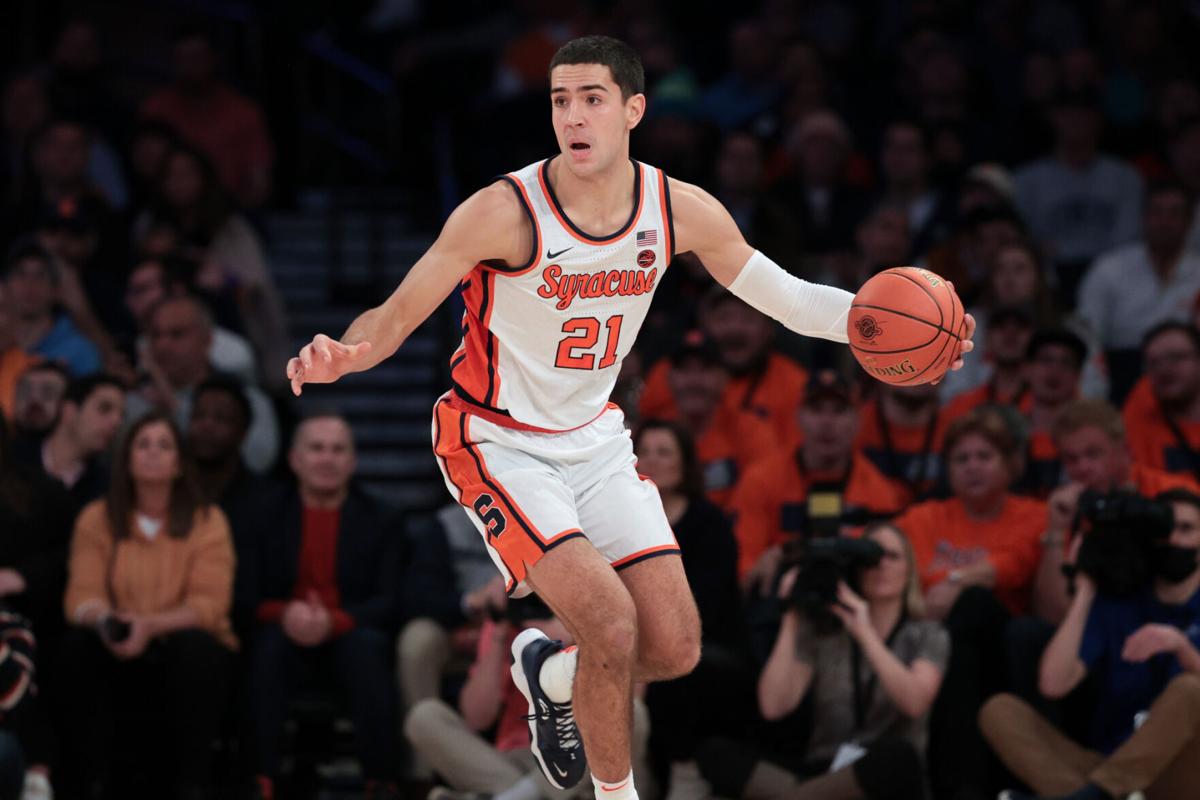 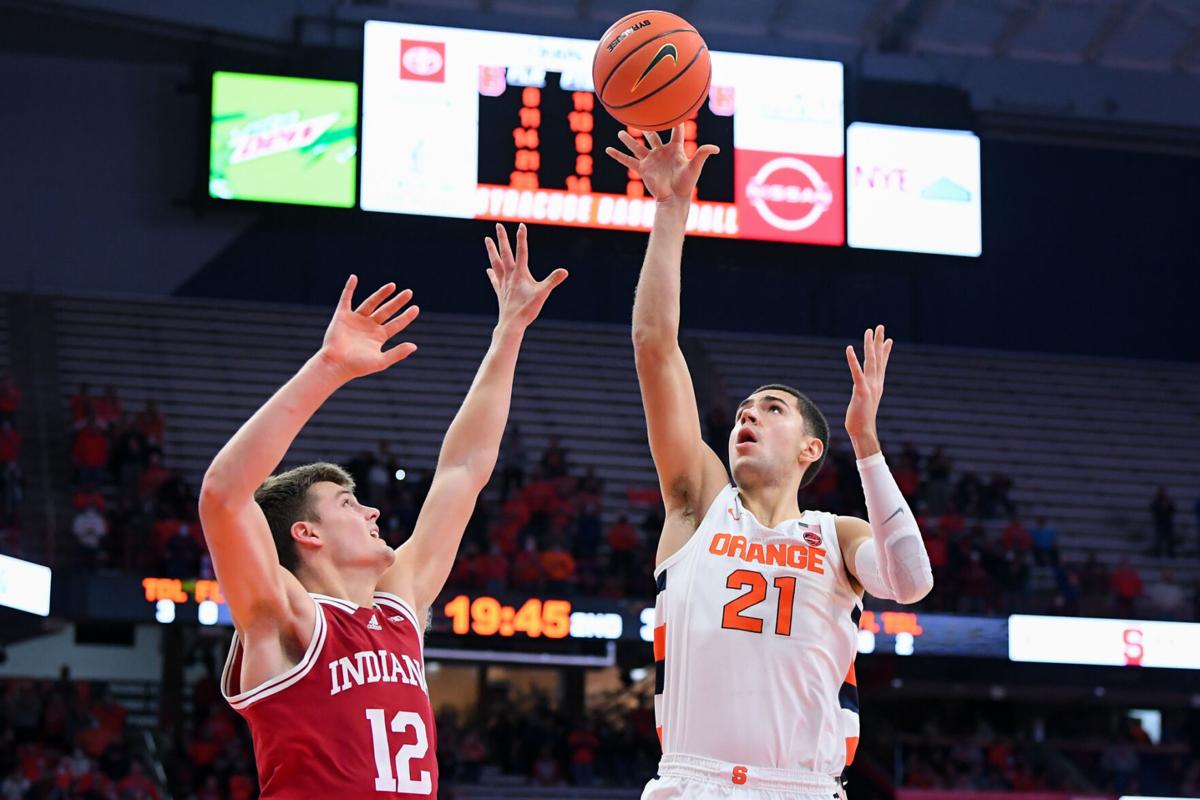 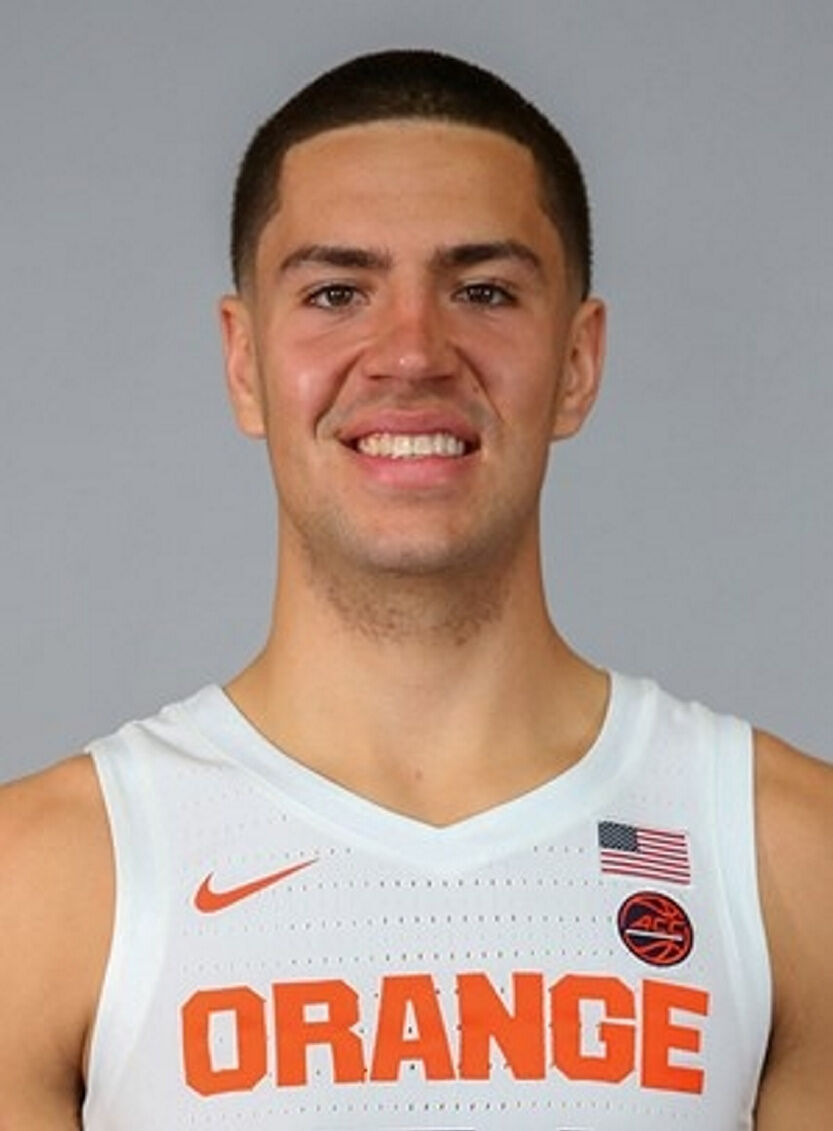 Cole Swider appears to be finally answering the call of Syracuse University men’s basketball coach Jim Boeheim to be more aggressive asserting himself on offense.

The senior transfer from Villanova has shaken off a rough shooting start to put his first season with the Orange back on track while SU looks to reestablish itself in the Atlantic Coast Conference.

Swider, the 6-foot-9 and 220-pound forward, has scored double figures in three straight games and is 8-for-17 from behind the 3-point arc during that span to extend his recent uptick in production.

“I think I’m just trying to expand my game, make plays when I can, and obviously just trying to help the team win in any way I can,” Swider said after SU’s 77-61 victory over Pittsburgh on Tuesday.

Over his last nine games, Swider is averaging 12.7 points and 7.5 rebounds with a 24-for-59 mark from deep. He has made multiple 3-point field goals in seven of those outings.

Swider struggled out of the gate, hitting on just 3-of-22 from deep through his first four games, and over his first nine outings, he averaged 9.8 points and 5 boards while hitting just 10 of 36 from behind the arc.

His 3-point percentage over the last nine games is 40.6 compared to a mark of 27.7 percent over his initial nine starts at SU.

Swider leads the Orange with an average of 7.1 rebounds per game and is 30-for-35 at the free-throw line overall.

Last season, Swider started just twice at Villanova and 75 percent of his shot attempts were 3-point field goals, mostly in catch and shoot situations, and he went 35-for-87 from deep.

Swider recently scored 20 points in an 88-87 loss at Miami, Fla., including a career-high six 3-pointers, to finish one off his season high and establish a career best against an ACC foe.

Jim Boeheim stated after that victory that he hoped the performance would spark Swider moving forward.

“He’s got to be more aggressive offensively,” Jim Boeheim said. “He’s catching it too many times and standing, he’s got to get to the basket or shoot the ball. He’s an offensive player and that’s what he’s got to do.”

Swider has made 39 total 3-pointers to rank sixth in the ACC, and he is logging 33.9 minutes per game to rank ninth. He is also 13th in the ACC for rebounding average and 22nd for scoring average.

Syracuse coach Jim Boeheim stated during his weekly radio show Thursday night that his son and SU graduate senior forward, Jimmy Boeheim, could petition the NCAA for a fifth year of eligibility to return to the team next season.

Jim Boeheim followed up in a separate Friday morning radio interview on TK99 to clarify that he was unsure of Jimmy Boeheim or others, such as Swider, would be interested in such a move but that it could be a consideration after the season.

Jimmy Boeheim sat out last year as a member of Cornell as the Ivy League was one of the few NCAA Division I conferences to call off its season entirely. He announced a transfer to SU last spring and ranks second on the team in scoring with averages of 14.8 points and 6.1 rebounds per game.

Two signees from SU’s 2022 recruiting class were nominated for the upcoming McDonald’s All-American game this week.

Four-star forward Chris Bunch and three-star forward Maliq Brown were among the hundreds of players nationwide to garner a nomination and could represent the Orange when final rosters are unveiled Jan. 25 on ESPN.

The game, which was not held the past two seasons due to COVID-19 concerns, is slated for March 29 in Chicago.

Former Syracuse star Andy Rautins signed a pro contract this week to play with AEK BC, a club located in Greece that competes in the EuroLeague, FIBA Champions League, and Greek Basketball League.

The 35-year-old last played professionally in March 2020 but his FIBA license remained active to allow the signing. He was most recently working as the assistant general manager for the CEBL’s Ottawa Blackjacks.

Former SU forward Marek Dolezaj signed a contract with Iraklis Thessaloniki of the Greek Basketball League, according to an announcement from the team located in Greece on Thursday.

Dolezaj had been playing with Ternopil-Tneu of the Ukrainian Basketball Superleague since last summer, soon after he moved on from the Orange.