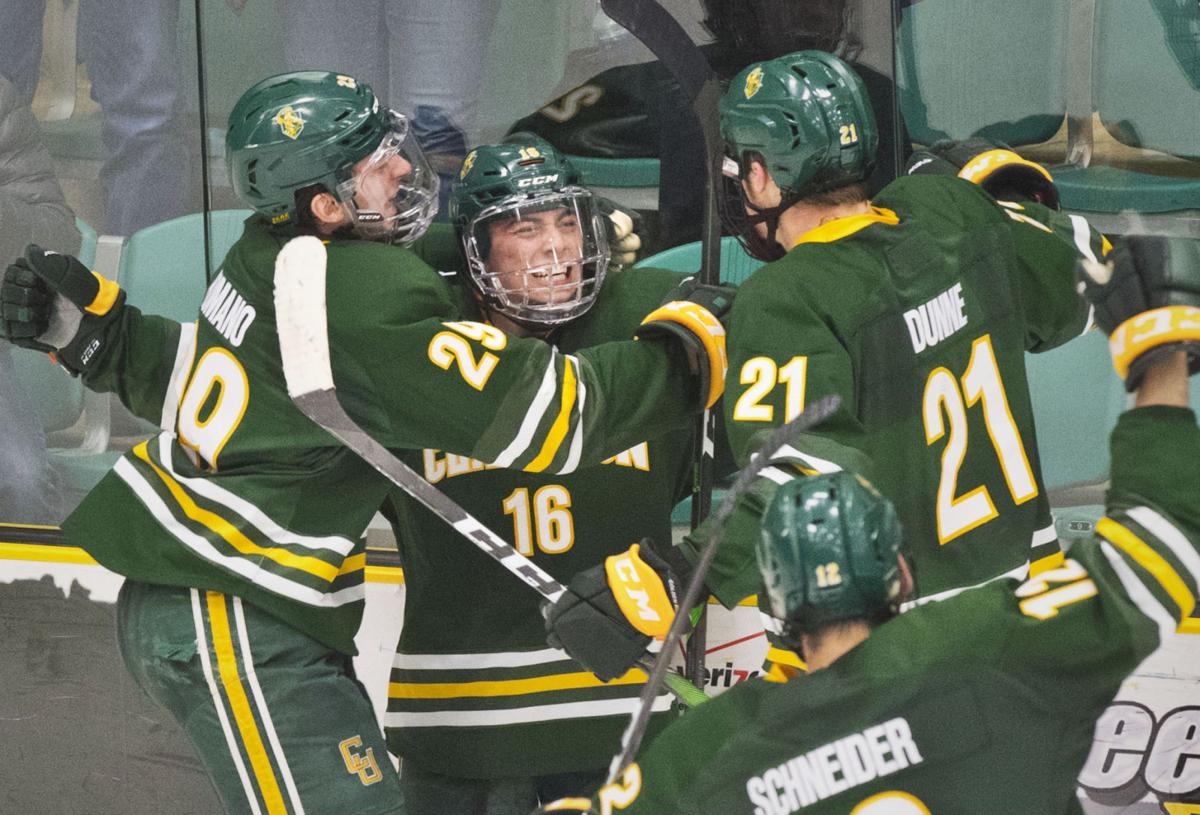 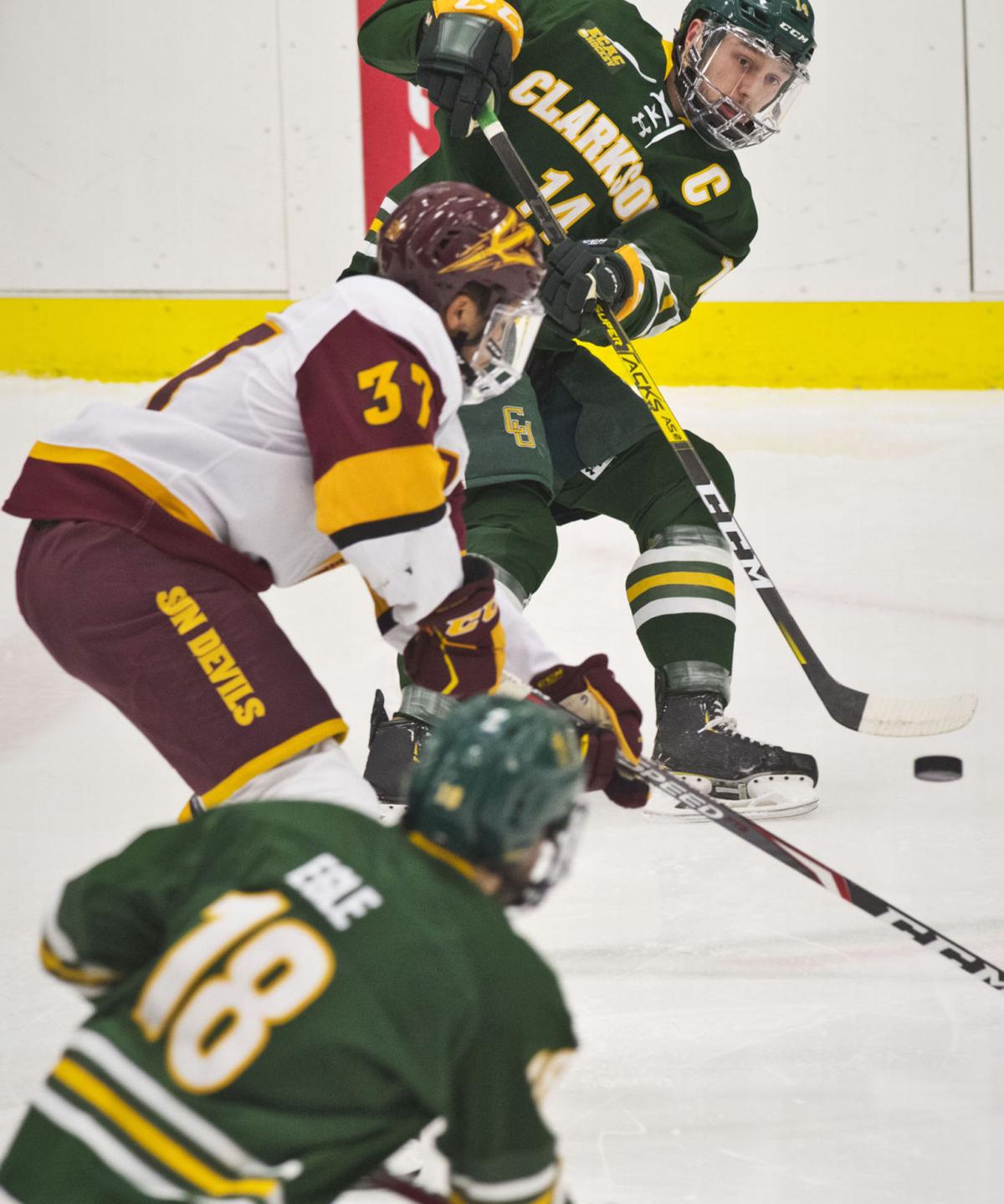 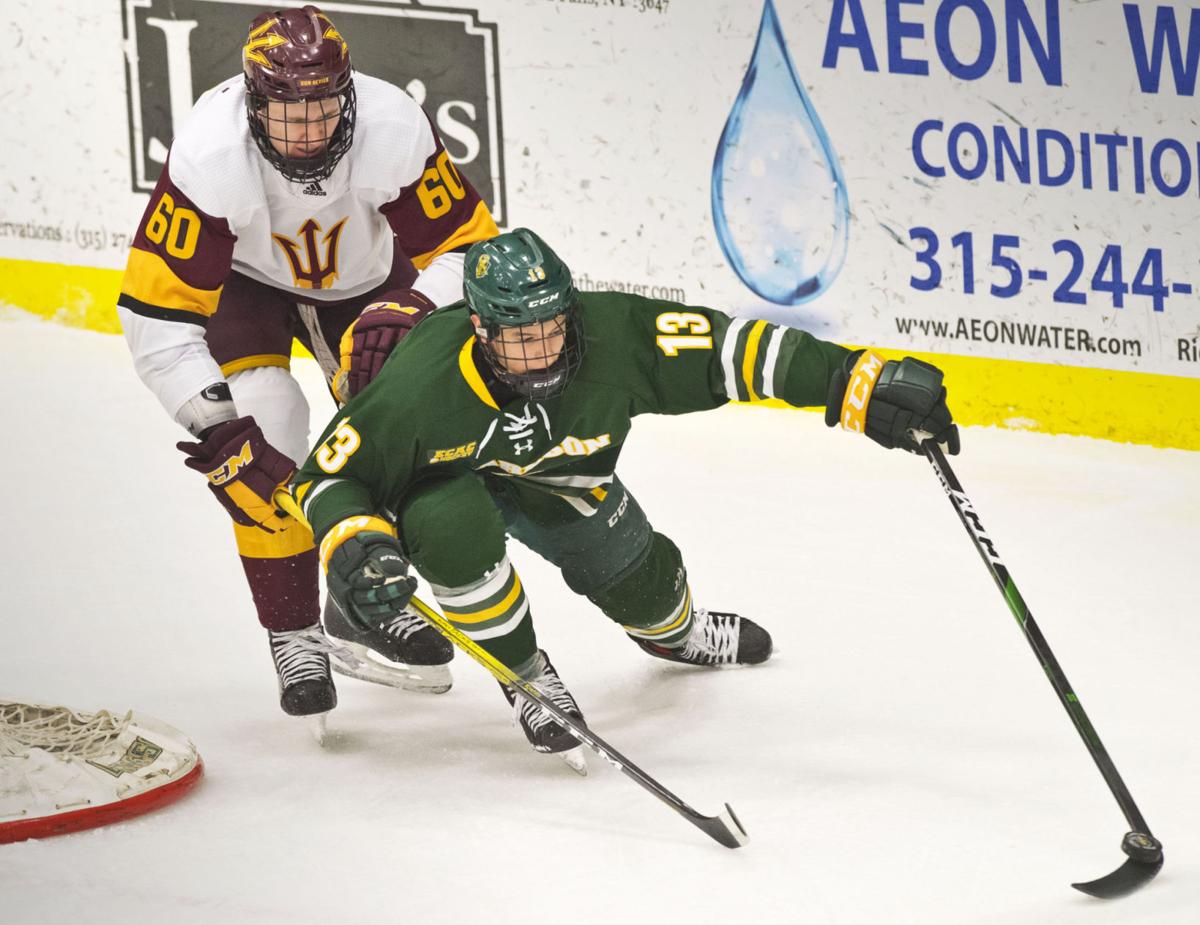 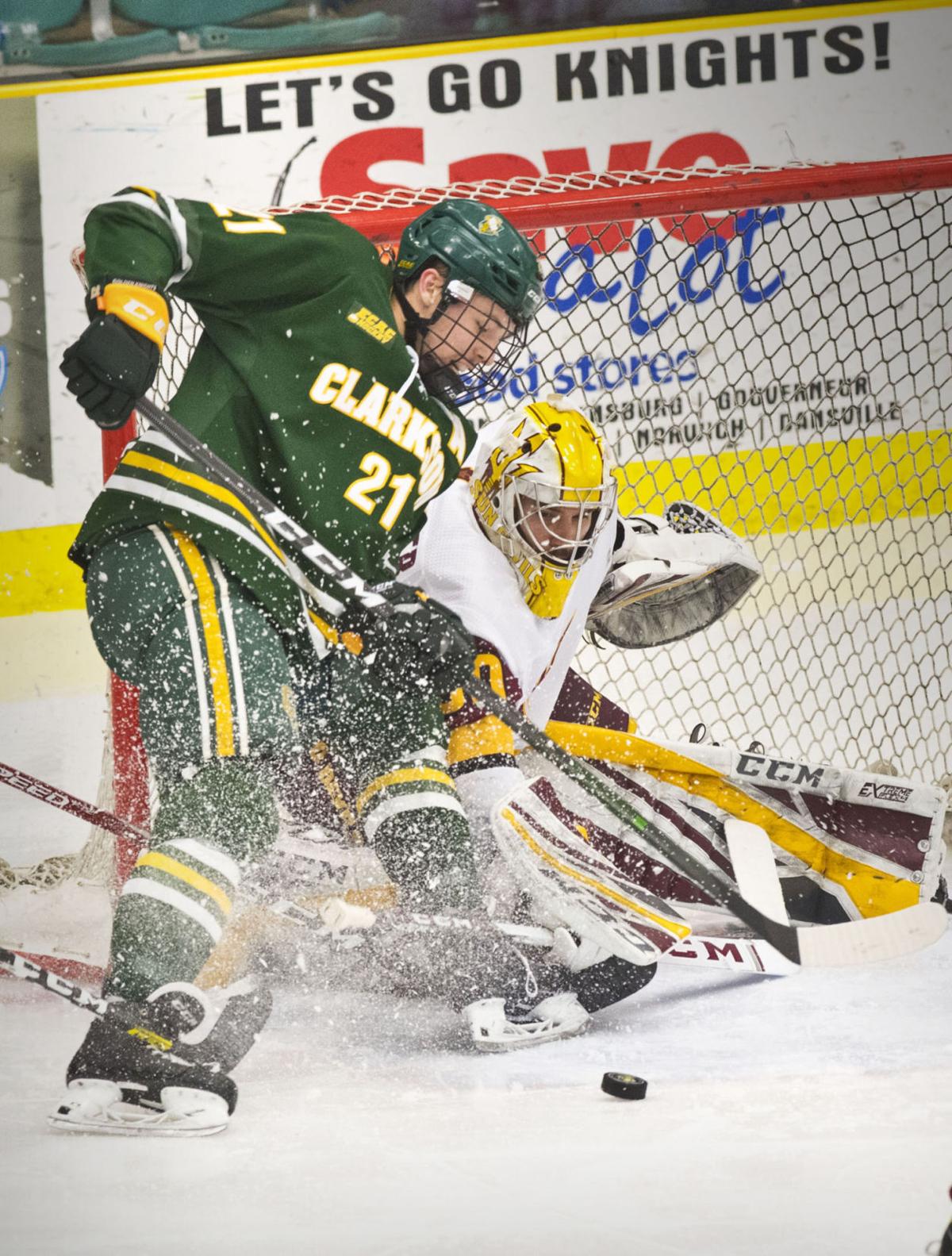 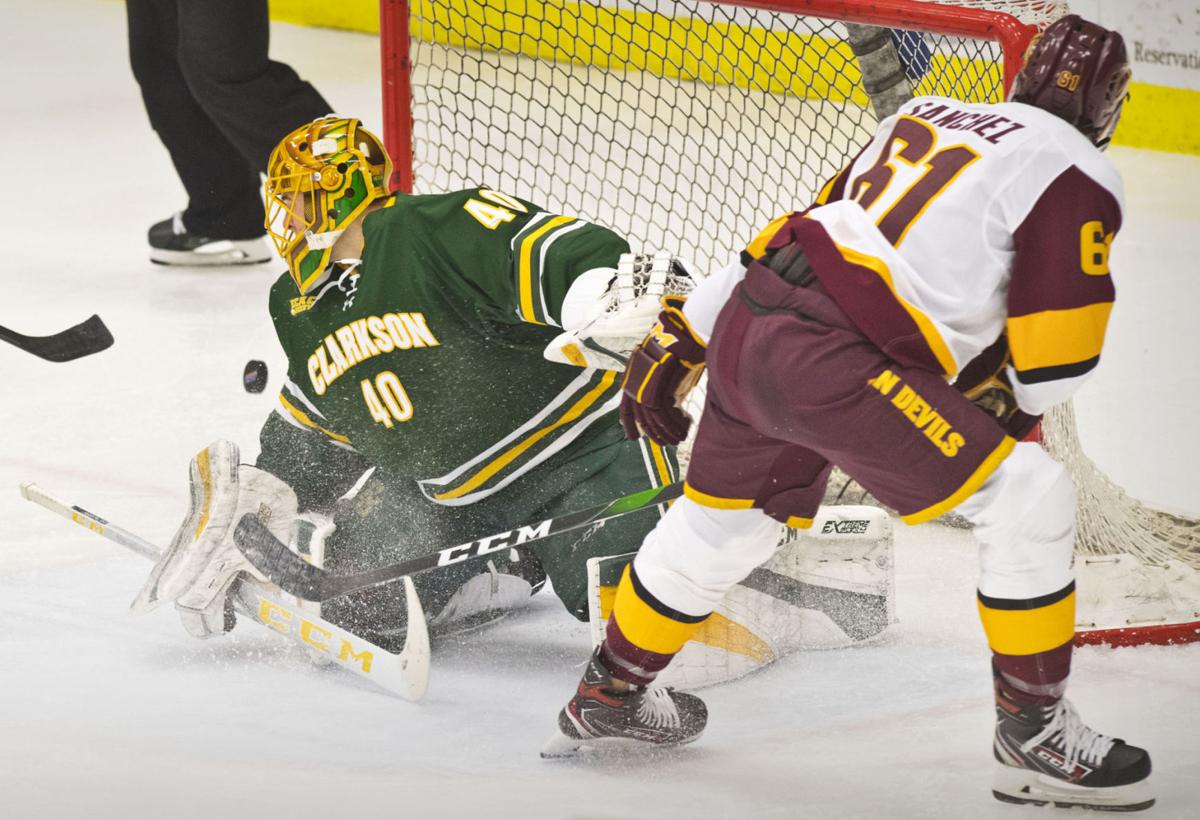 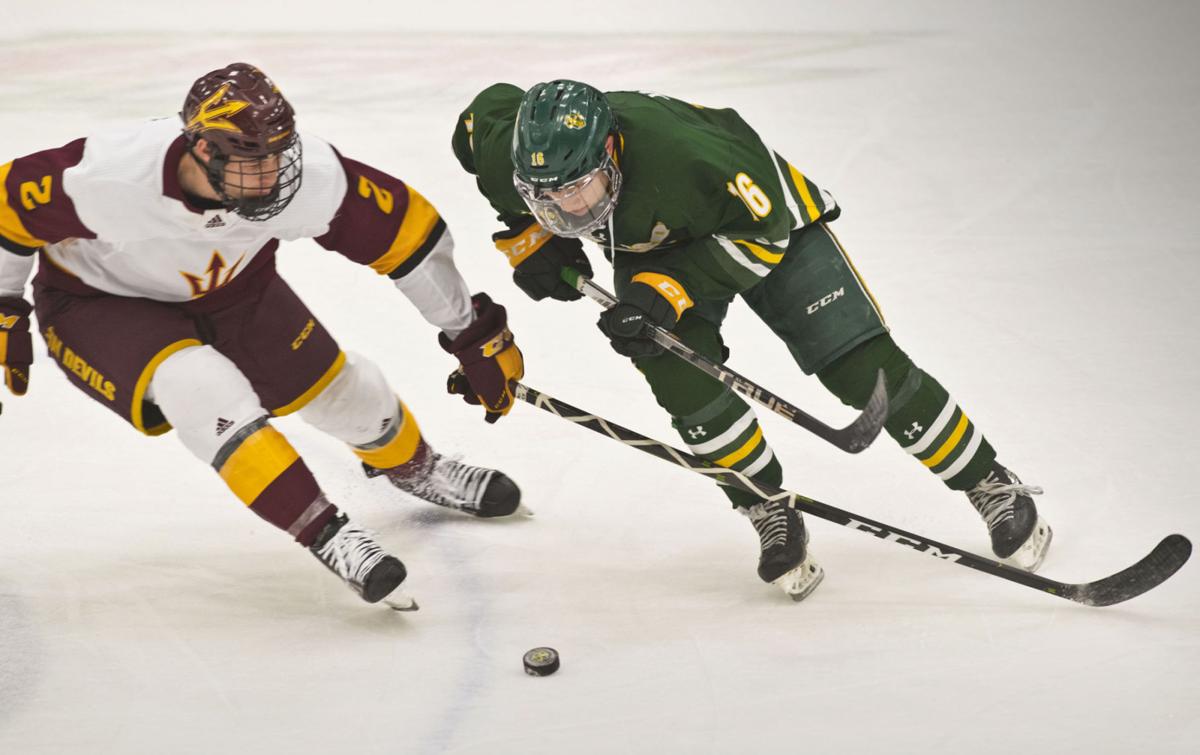 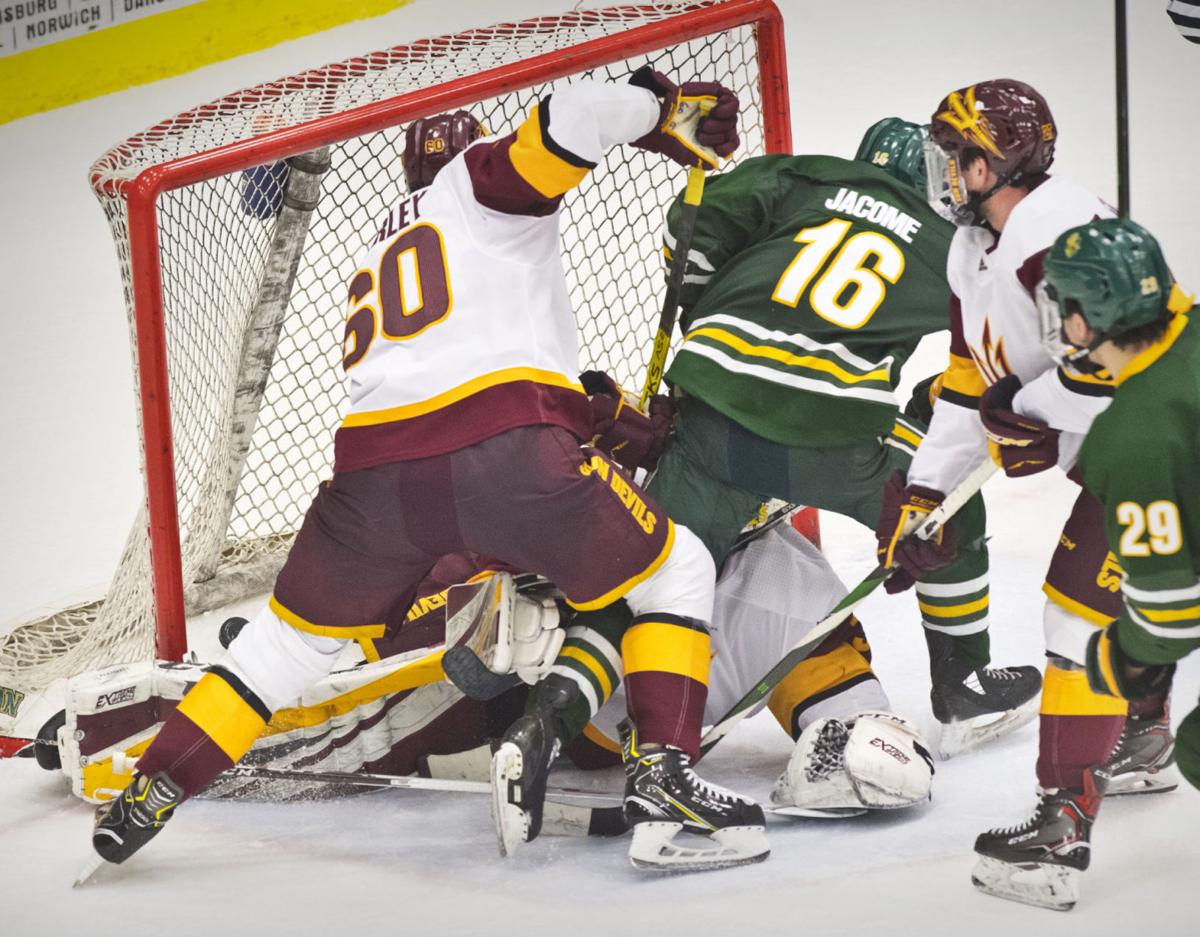 Finally, on the 44th shot, the Golden Knights got a game-winning goal from junior Jack Jacome, who took a pass from Josh Dunne and scored the winner at 1 minute, 5 seconds of overtime.

Clarkson defeated the Sun Devils, 2-1, before a crowd of 2,927 in a nonconference game Friday night at Cheel Arena. The teams meet again at 7:30 tonight.

Jacome’s winning goal came by persistence as he kept driving to the net and finally got a shot to trickle over DeBrouwer’s pads.

“I saw (Dunne) doing his thing down low, and when you see that, I know it sounds kind of simple, just go to the net and good things will happen,” Jacome said. “I know coach (Casey Jones) was praising on that, to have a net-front presence. That’s what you’ve got to do in overtime, just stick to the process.”

Said Dunne, “They are good team and they defended hard. It was frustrating, but we just kept at it and finally got that one. We played to our strengths and as a team we battled hard. It’s important for us to keep doing that.”

Before the game even began Clarkson’s Haralds Egle and ASU’s Tyler Busch got into a shoving match while waiting for the opening faceoff and ASU picked up a cross-checking penalty 17 seconds into the game.

Zach Tsekos took a shot from behind the circle and Romano redirected it. Jordan Schneider also assisted on the play.

“It was a good play by Zach to come down the wall and he kicked it out to (Schneider) and he also walked down, took his place and Zach found a seam from the blue line and it kind of hit my stick and squeaked in there in the corner,” Romano said. “We had a lot of shots, but we also had not very good net-front (presence). We got away from that, and then we got back to that, and we kept plugging and plugging and eventually it went in, in overtime.”

ASU’s lead scorer, Johnny Walker, had a chance to tie the game at 9:25 of the opening period when a nice pass from Jordan Sandhu set up a mini-breakaway, but his shot went off the pad of Clarkson goalie Frank Marotte.

Devin Brosseau and Anthony Callin had a chance to make it 2-0 at 6:40 of the second period during a two-on-one rush, but a shot by Brosseau went off DeBrouwer’s chest.

ASU, despite being outshot 12-5 at that point of the period, tied the game at 12:18 of the second period on a tip-in goal from James Sanchez, off an outside shot by Sandhu.

Clarkson thought it took a 2-1 lead at 9:30 of the third period when Mathieu Gosselin tipped in a shot next to the crease.

The train whistle went off and the crowd roared, but no officials ever pointed to the ice for a goal and that call was upheld after a video review.

Clarkson had another two-on-one chance at 10:55 of the third period with Egle and Jacome, but Egle’s shot went to the leg pads of DeBrouwer.

ASU also had a chance to win the game at 16:46 on a close shot by Josh Maniscalco, but Marotte slid and blocked it with his leg pads.

“I didn’t think we did a great job taking ice away, so I thought (DeBrouwer) saw a lot of pucks,” Jones said. “He made some good saves in traffic on second-chance opportunities. It was one of those situations where we have to be a little cleaner around that. It was a game with two teams battling hard. You had to earn every spot. You look at every goal. One was a tip for them, one was a tip for us, and the last one was a hard-working, second-chance opportunity on a wrap.”