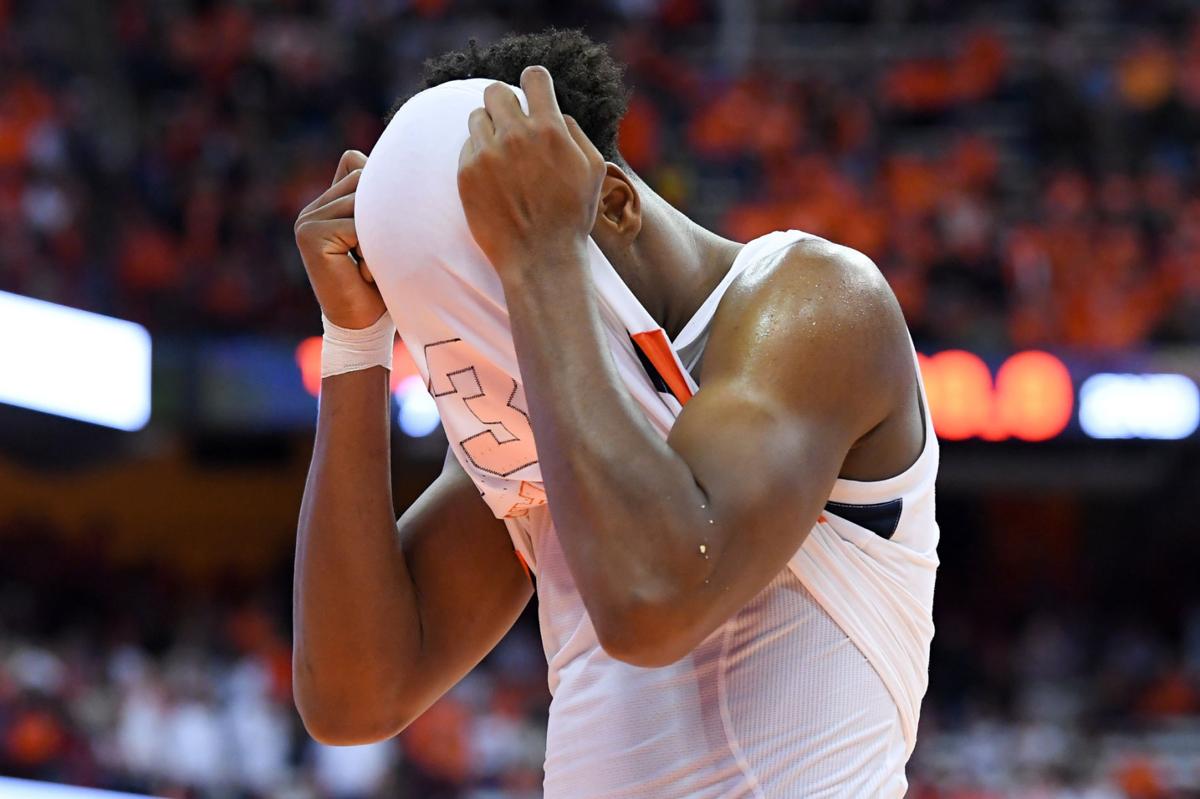 Syracuse’s Elijah Hughes reacts after the game against Notre Dame on Saturday at the Carrier Dome. Rich Barnes/USA TODAY Sports 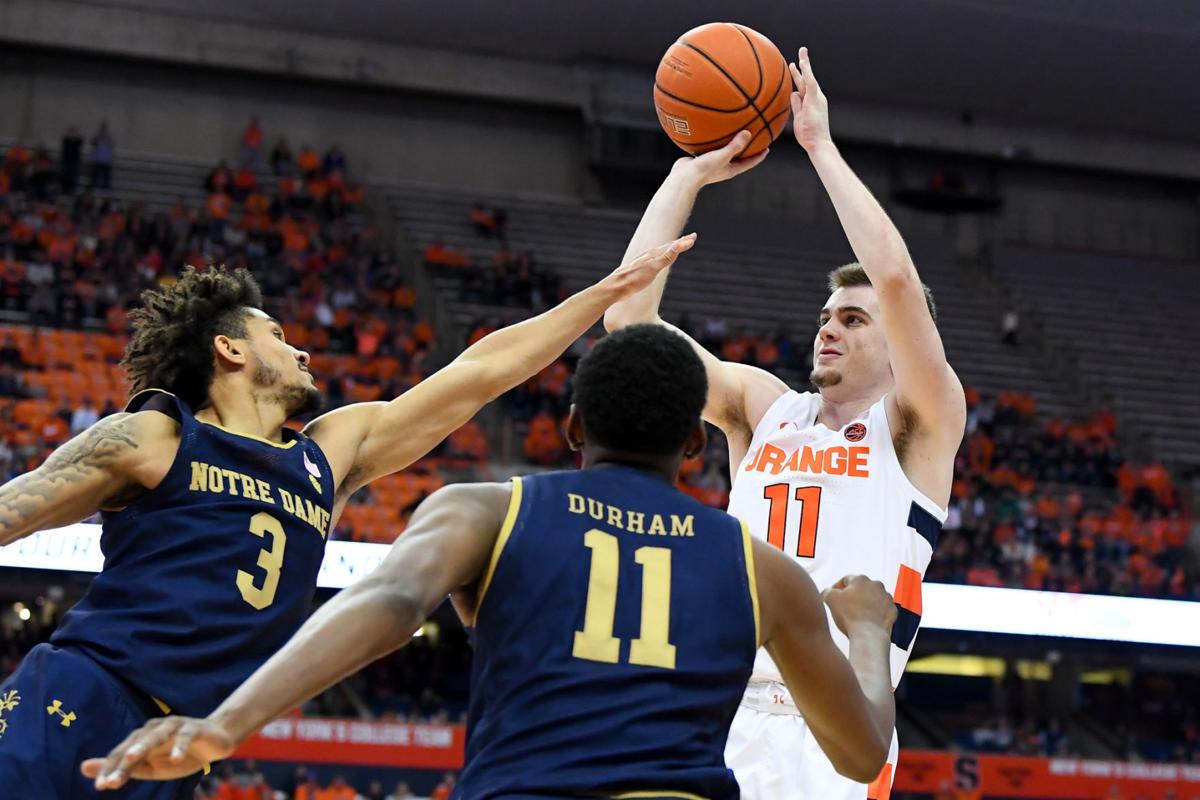 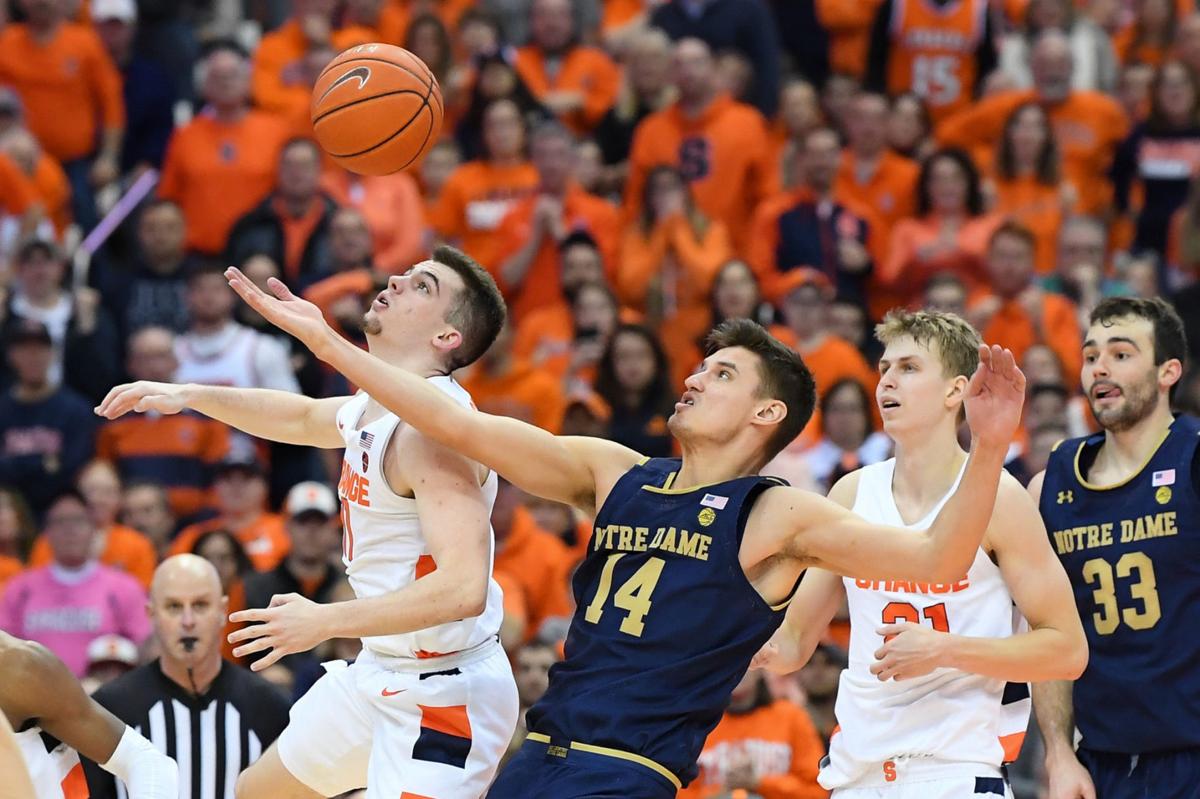 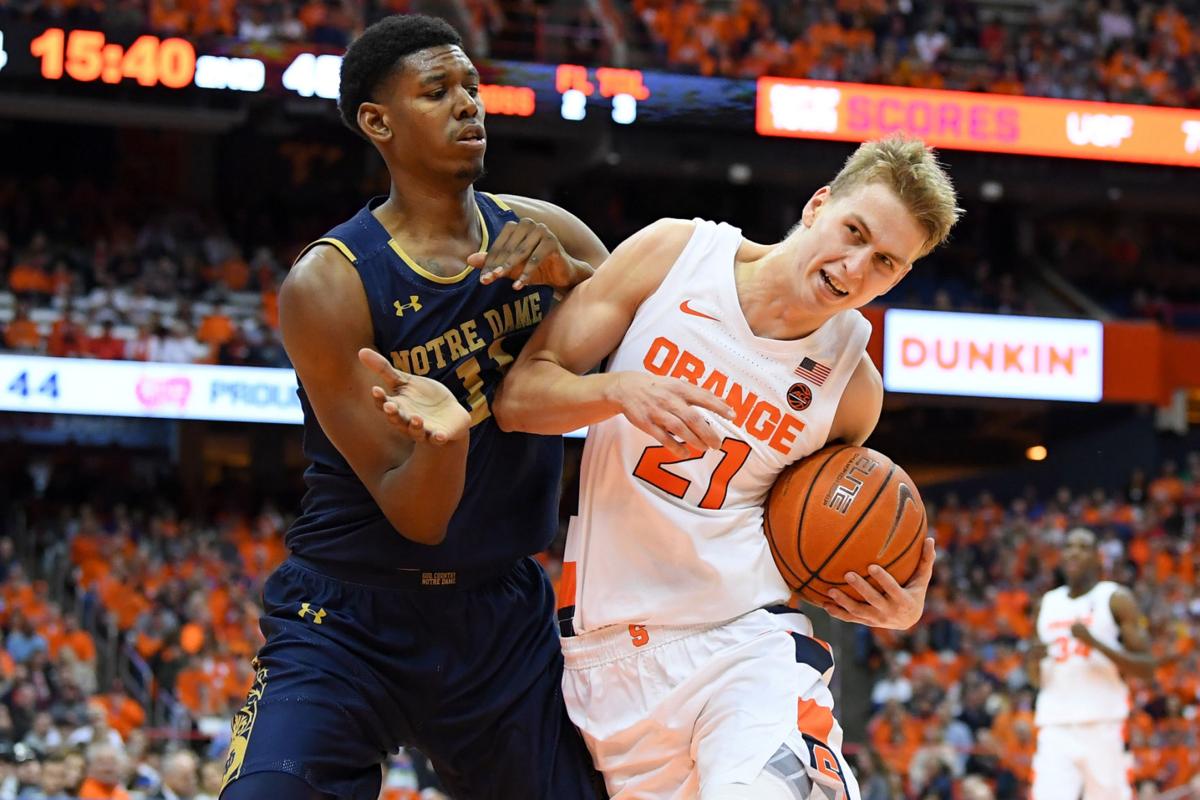 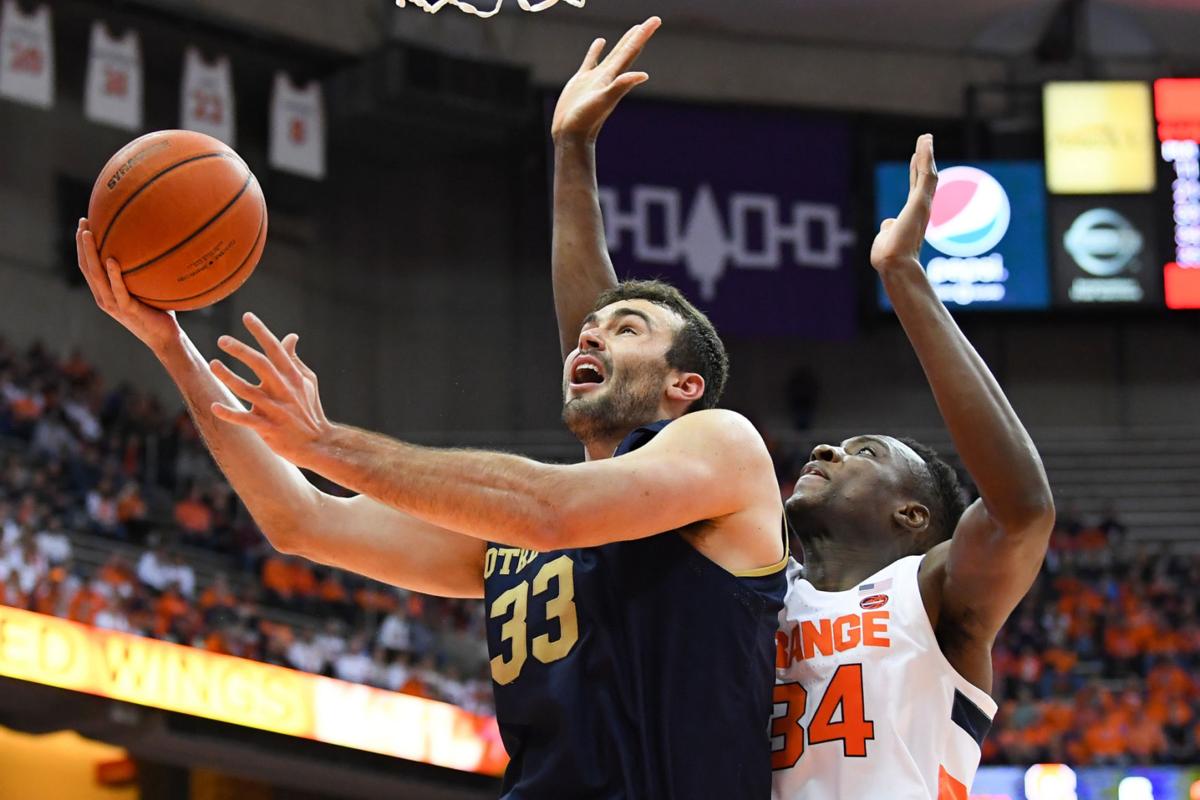 Syracuse’s Elijah Hughes reacts after the game against Notre Dame on Saturday at the Carrier Dome. Rich Barnes/USA TODAY Sports

SYRACUSE — The Syracuse University men’s basketball team tied the program record for most 3-point field goals made in a single game, but it wasn’t enough to overcome an equally potent shooting performance by Notre Dame during an Atlantic Coast Conference thriller Saturday.

John Mooney scored 28 points and grabbed 14 rebounds while Prentiss Hubb and T.J. Gibbs each made six 3-pointers to lift the Fighting Irish to an 88-87 victory over the Orange in front of 19,821 roaring fans at the Carrier Dome.

Freshman point guard Joe Girard III scored 13 of his 20 points during the last six minutes for SU and connected from deep with 0.4 seconds left to cut the Orange’s deficit down to one, 88-87, falling down to the court afterward but no foul was called just before the buzzer sounded. The game marked SU’s first this season to be decided by single digits.

“Maybe a little bit (of a foul), I don’t think it was a flop at all, but it is what it is, you just try to make the shot and hopefully draw some contact, but it didn’t happen,” Girard III said.

Buddy Boeheim added of Girard III’s final shot: “He definitely got hit on the arm or maybe a little body contact, I’m not 100 percent sure, but they didn’t call it and that’s fine. That’s a tough call to make at the end of the game or to end the game like that, but you can’t look at that play to decide the game.”

Syracuse and Notre Dame each connected on 15 shots from deep after entering the matchup as two of the top three ACC teams in 3-pointers made and attempted. For SU, the tally matches the team record that had been reached on five previous occasions, most recently against Georgia Tech in March 2017 at the Dome, and marks the seventh time this season that SU has made 10 or more from behind the arc.

Buddy Boeheim scored a team-best 23 points, including a career-high seven 3-pointers, to lead five players in double-figure scoring for the Orange (8-6 overall, 1-2 ACC).

Elijah Hughes and Marek Dolezaj scored 19 and 16 points, respectively, and each played the full 40 minutes. Freshman Quincy Guerrier added 10 points, five rebounds, and three blocks in a productive outing off the bench for SU, which will play its next ACC game at 9 p.m. Tuesday against Virginia Tech in the Dome.

“We couldn’t get stops,” Syracuse coach Jim Boeheim said. “We played just about as well offensively as we can, but we have to get stops to win and we couldn’t do that.”

Girard III took over late, seemingly fueled by a testy exchange with Hubb after the Irish guard stepped over Girard III and stared him down as he stood over, prompting a technical foul call seconds after Mooney scored inside to put Notre Dame ahead with 5:30 left in the game.

Girard III made both free throws resulting from the ‘T’ to give SU a 71-70 edge, marking one of seven second-half lead changes, and then made a jumper just inside the arc to extend the advantage to 73-70 on the ensuing possession. Girard III then made three shots from deep in the closing minutes to ignite SU, but Hubb also rose to the occasion for Notre Dame.

“It’s being competitive, when someone usually challenges me or any competitor, usually you’ll step your game up a little bit and that’s kind of what happened,” Girard III said.

“It was just one instance, and that got me feeling it a little bit, then just doing what I’m trying to do to help the team win the game,” he added. “He was just competing, and it just probably wasn’t in the right way so that’s what the refs saw and he got over it, I got over it, and we move forward.”

Mooney’s double-double highlighted a strong rebounding effort for the Fighting Irish (10-4, 1-2), which finished with a 24-14 edge over the Orange in second-chance points overall and out rebounded SU in the second half by a margin of 25-16. Hubb and Gibbs scored 22 and 21 points, respectively, for Notre Dame.

Hughes also added five rebounds, five assists, and made three from behind the arc for SU. He has scored in double figures and made at least one 3-pointer in every game this season. Dolezaj provided team highs of 10 rebounds, seven assists, and two blocks for the Orange.