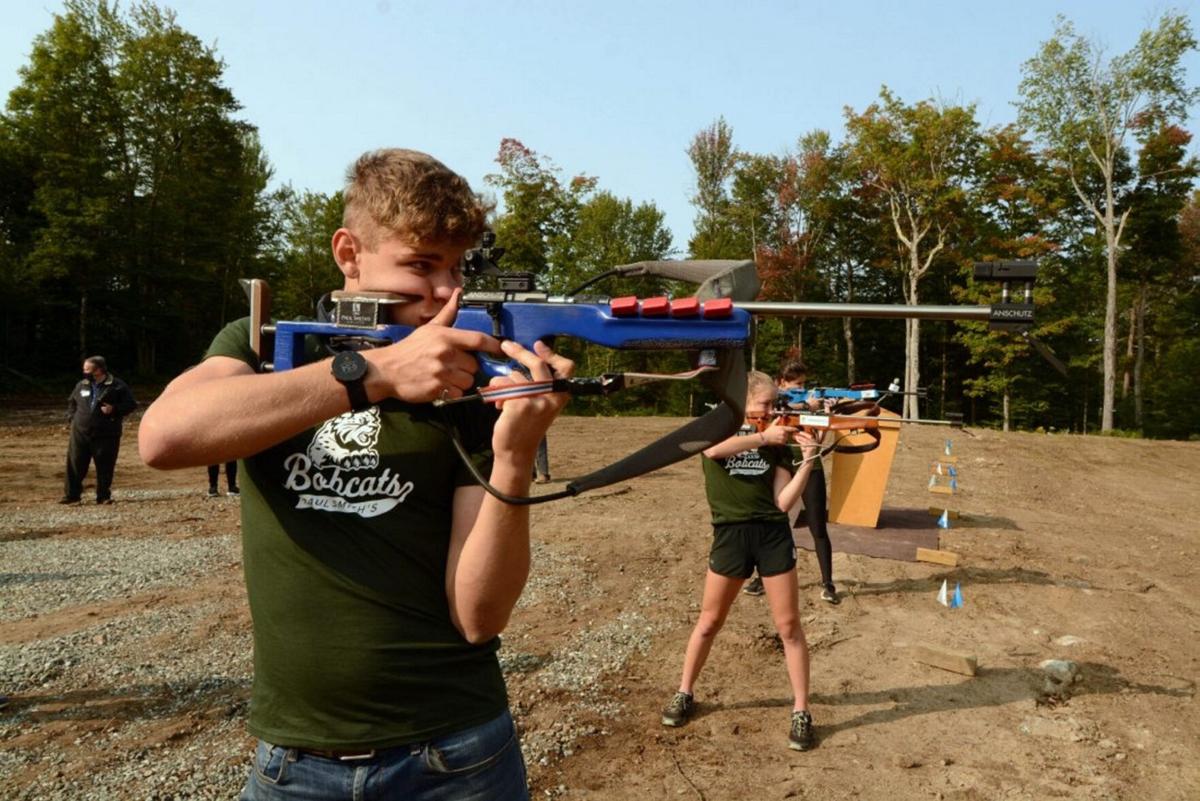 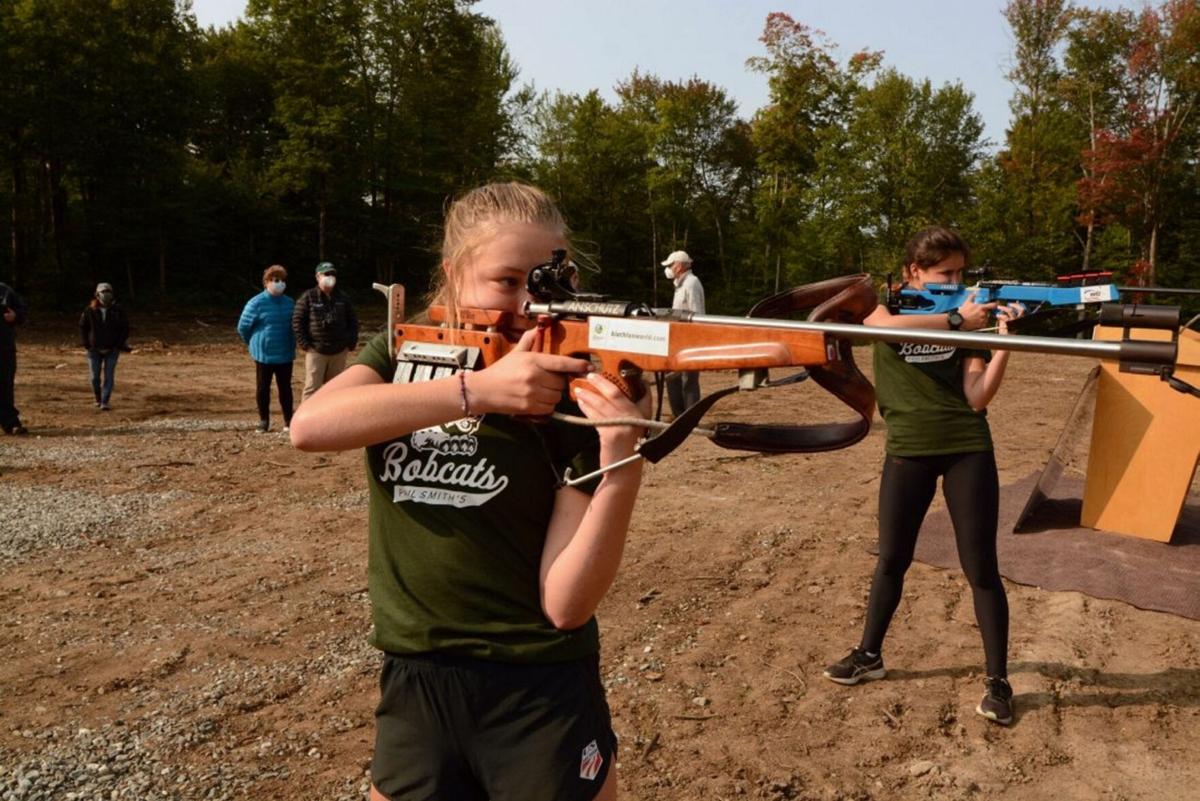 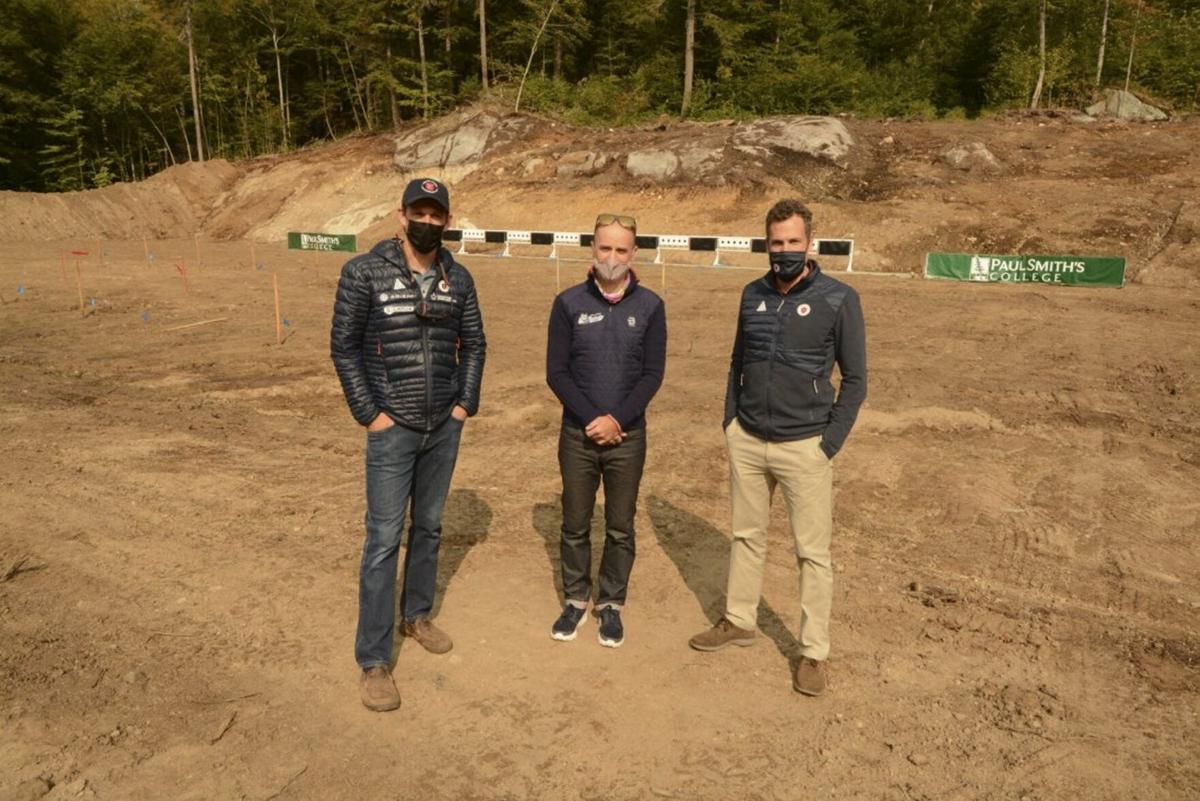 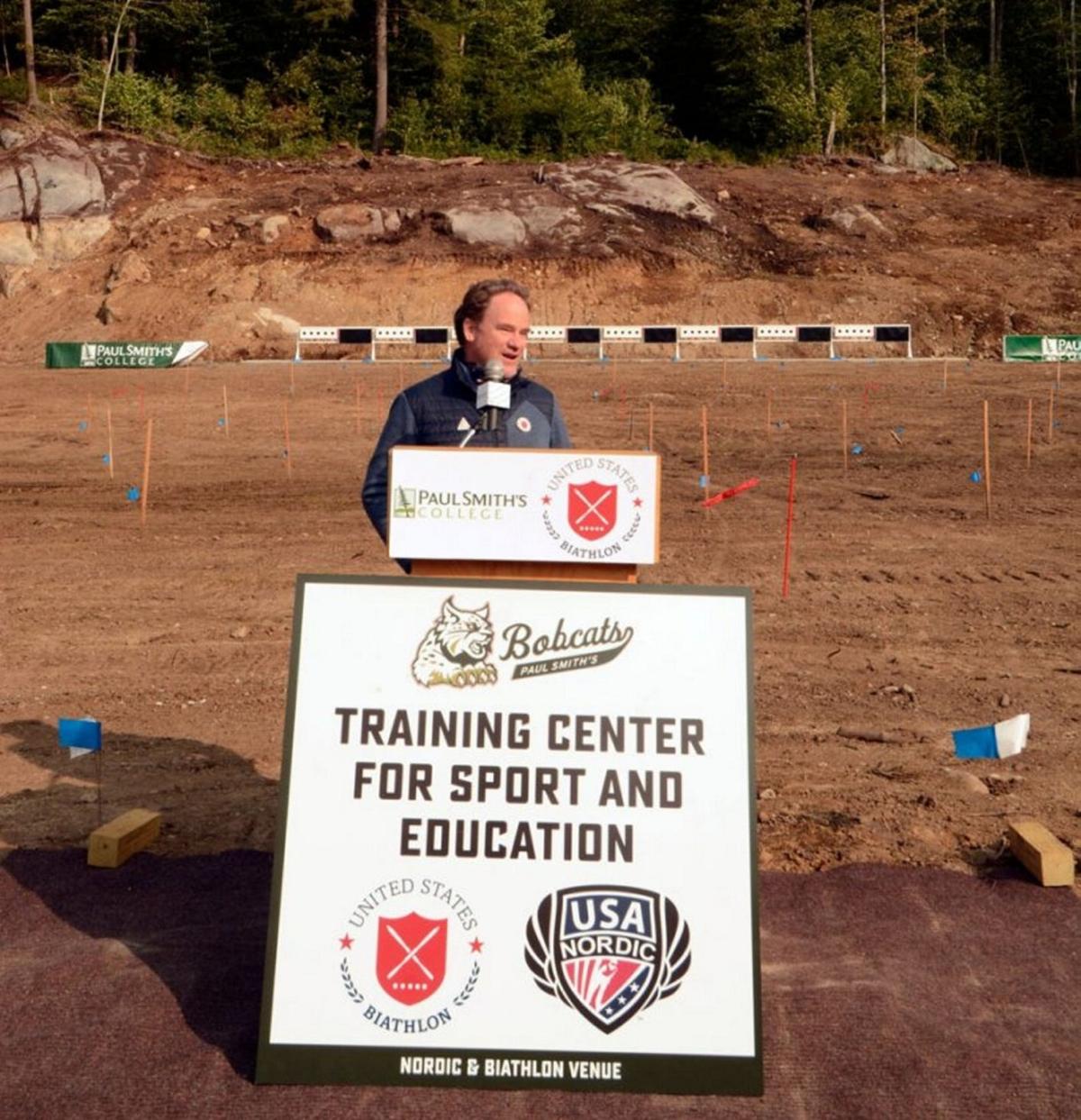 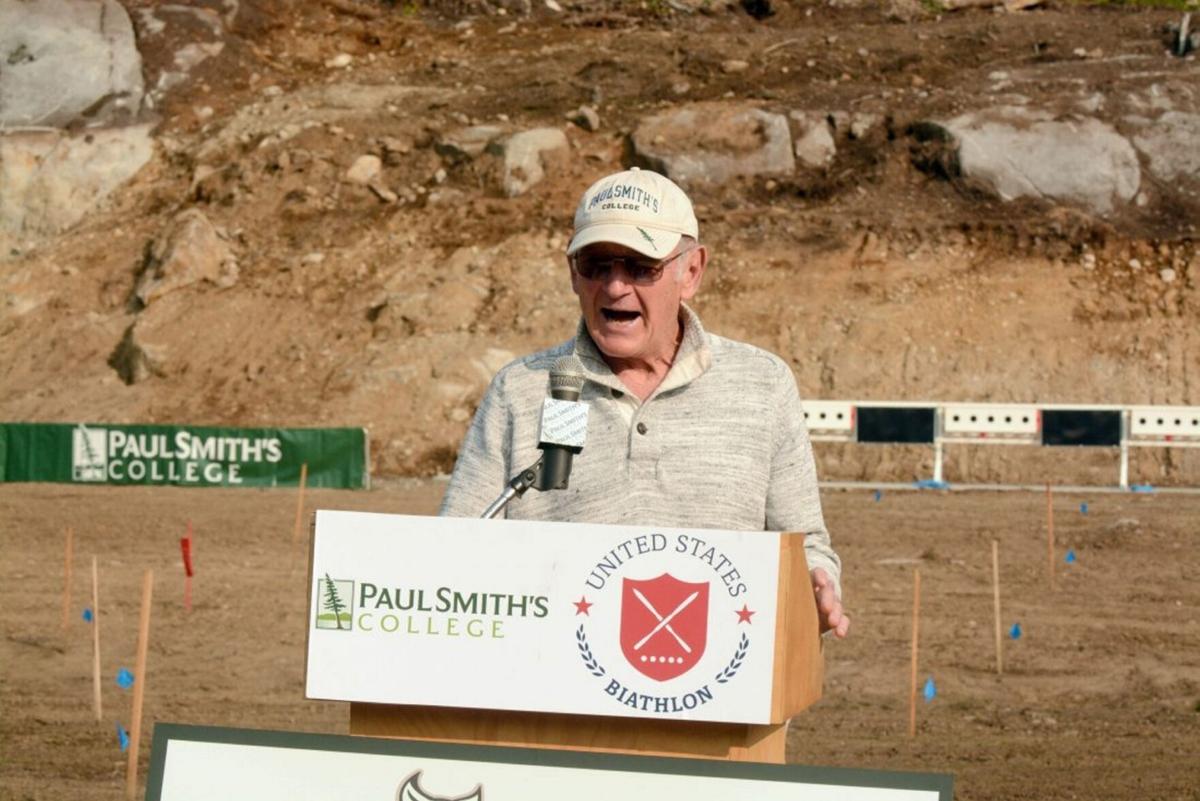 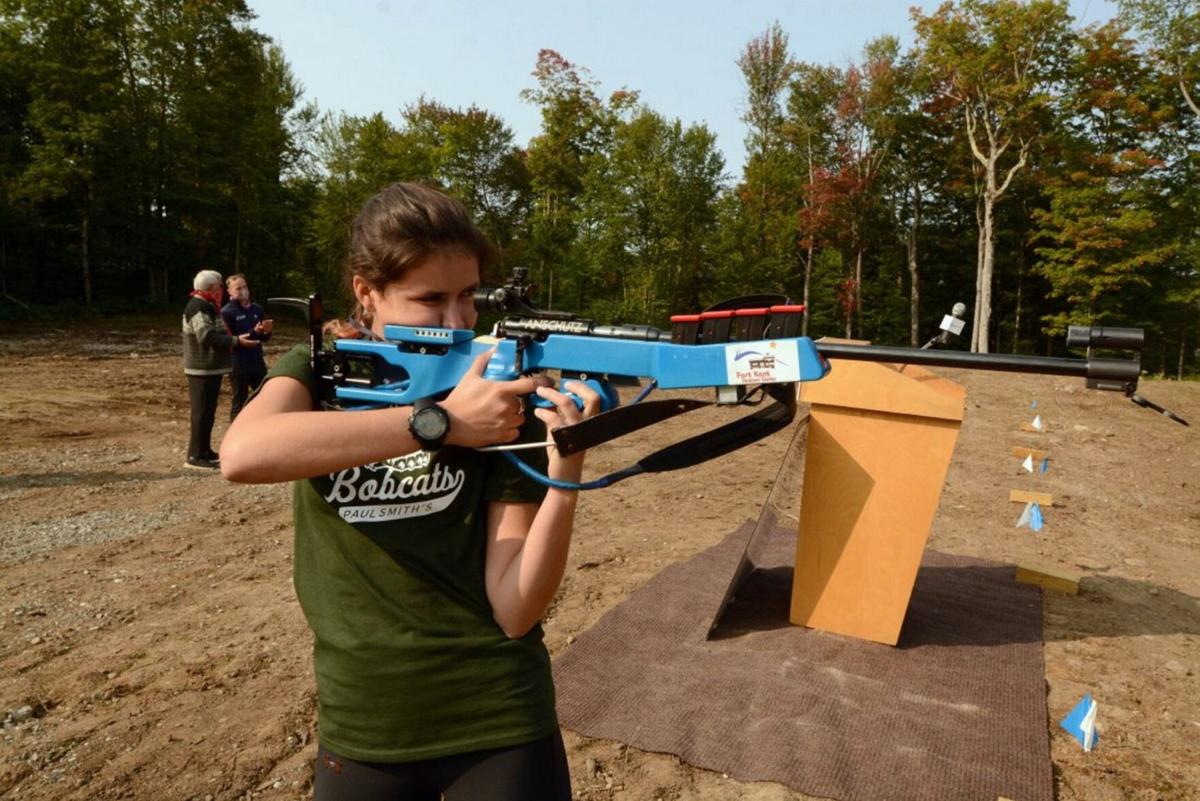 PAUL SMITHS — There’s little doubt that anyone who has been around the north country knows about the “Miracle on Ice.” Lowell Bailey, a 2017 world champion and now a leader in the U.S. Biathlon organization, described what he considers another miracle, which is now in the making 40 years later.

The Lake Placid resident was talking about a brand-new facility a mile down a gravel logging road on the wooded campus of Paul Smith’s College.

Last week, Bailey, along with a who’s-who list of people involved with the United States biathlon program and staff from the college, were on hand to see the first shots fired as the new biathlon range was christened at Paul Smith’s.

Although there’s more work to be done at the range, it’s now the centerpiece of a Nordic facility that’s combined with an extensive new trail system that connects to existing trails at the college’s Visitor Interpretive Center.

Three students who are members of the college’s new sports initiative program had the honors of taking the first shots. Lina Miner-Fara, Dolcie Tanguay and Garrett Beckrich are American biathletes all pursuing Olympic dreams, and at the same time working toward degrees as scholarship athletes in the college’s first-year program that allows them to continue training in the sport while attending school.

The new range boasts eight shooting stations and the potential for expansion. Ground was just broken on the massive venue a year ago.

“This is an amazing place,” Bailey told the audience gathered at the unveiling of the range. “It’s always been a great place. It’s always been a place with great terrain, good skiing, always good snow, and now seemingly out of a miracle, there’s been a world-class biathlon venue just dropped into the middle of it. I can’t say enough about the hard work that everyone has put in.”

Tim Burke, who lives in Lake Placid and who like Bailey, grew up in the Adirondacks and is a four-time Olympic U.S. biathlete, is one of the coaches for the three new Bobcats. He was also on hand for the ceremonial shots fired. And along with Bailey and Burke — the two most successful biathletes in U.S. history — Max Cobb, the president and CEO of the US Biathlon Association, was also in attendance.

Others at the gathering included Paul Smith’s head Nordic ski coach Matt Dougherty, the new interim president of the college John Strauss, and Lake Placid’s John Morgan, the sports initiative director at Paul Smith’s. John Morton, who played the lead role in designing all the new trails in the woods surrounding the range, was also present.

“I grew up just 2 miles down the road from here, and to be here standing in a biathlon range right next to where I grew up is truly incredible,” Burke said. “So much has happened so fast here at Paul Smith’s. When Max and I started talking with the college just last year about starting a program here at Paul Smith’s for biathlon, we were always excited about it. When we left the first conversation, we thought ‘Hey, this is great, but this is something that’s maybe a couple years to get rolling.’

“What the college has done in such a short amount of time is truly incredible,” Burke continued. “Not only have we started this program, we’ve improved on the trails, we’ve built a biathlon venue, and we’re so excited to get started with our first three students already this year.”

Morton said the location for the shooting facility is unlike any in the nation.

“This is a team effort, and I was thrilled to be involved in it,” Morton said. “I’ve been involved in biathlon since 1968, so I’ve seen a lot of facilities around the world. I’ve designed trails in China, South Korea and all over the United States. The terrain here, the fact that this is a really noted pocket of natural snow, the fact that the campus is literally adjacent to the facility — these things all go together to make this, in my mind, one of the premier Nordic skiing facilities, certainly in the Northeast and probably in the nation.”

After officials gave short addresses from a podium, the three student-athletes, dressed in the green and white colors of their new school, stepped up to the firing range and faced the targets 50 meters away. Beckrich, who hails from Grand Rapids, Minnesota, joked that he was more nervous than he was a year ago at the biathlon’s junior world championships, commenting that his knees couldn’t stop shaking. In fact, Beckrich started off with missed shots but persisted until his aim was true on his final bullet.

“I hope I hit the target,” Beckrich said before taking a shot. “We’re just going to go out there and enjoy the moment.”

Beckrich, Tanguay and Miner-Fara are all part of a program that’s the first in the nation for the sport of biathlon, in which they are able to train while attending college. Prior to the new Paul Smith’s initiative, American biathletes were forced to make the choice whether they would continue pursing their athletic careers or give that up to attend college.

Bailey and Burke weren’t afforded such an opportunity. In 2002, Bailey stepped away from the sport to attend — and ski for — the University of Vermont, and then returned to biathlon to become a four-time Olympian.

Meanwhile, Burke forged ahead in biathlon full-time and also wound up competing in four Winter Olympics.

“It’s a privilege to be a guinea pig with a new program,” Beckrich said. “I was originally going to join the military in March, and then I got news of this program. I’m very excited that I was going to be able to still pursue my Olympic dream and go to college at the same time.”

Tanguay grew up in Fort Kent, Maine, which has been a hub for the sport of biathlon in the Northeast that has hosted World Cup competitions in the past. She came to Paul Smith’s during the second week in August and has gone headlong into her training and academics.

“Things are really good so far,” Tanguay said. “I’m enjoying living in the Adirondacks and getting to study everything with nature going on all around me. Training is in three-week blocks with two harder weeks and then a recovery week. I’m running, roller skiing, shooting, biking, doing everything I can do to stay active. My goal right now is to make it to junior worlds this winter, and then after that we’ll see what happens.”

Miner-Fara was actually born in Saranac Lake but soon moved to Utah and grew up in Heber City, which is where the biathlon and Nordic skiing events took place during the 2002 Salt Lake City Winter Olympics. She transferred to Paul Smith’s from the University of Utah.

“It’s just so unprecedented to be able to go to school and do biathlon right on campus,” Miner-Fara said. “It’s so new and so incredible and I’m really excited to be a part of that. This is a different level. We have coaches and staff and professors that understand that we really need to balance training and school in a way that my old university didn’t. At Utah, it was just about school.

“This is a really cool experience and one that I think will be really valuable for all of us,” Miner-Fara added. “I was born in Saranac Lake, but I’ve never spent a ton of time out here so it’s a really awesome adventure. Forty-six peaks and all, it’s really cool.”