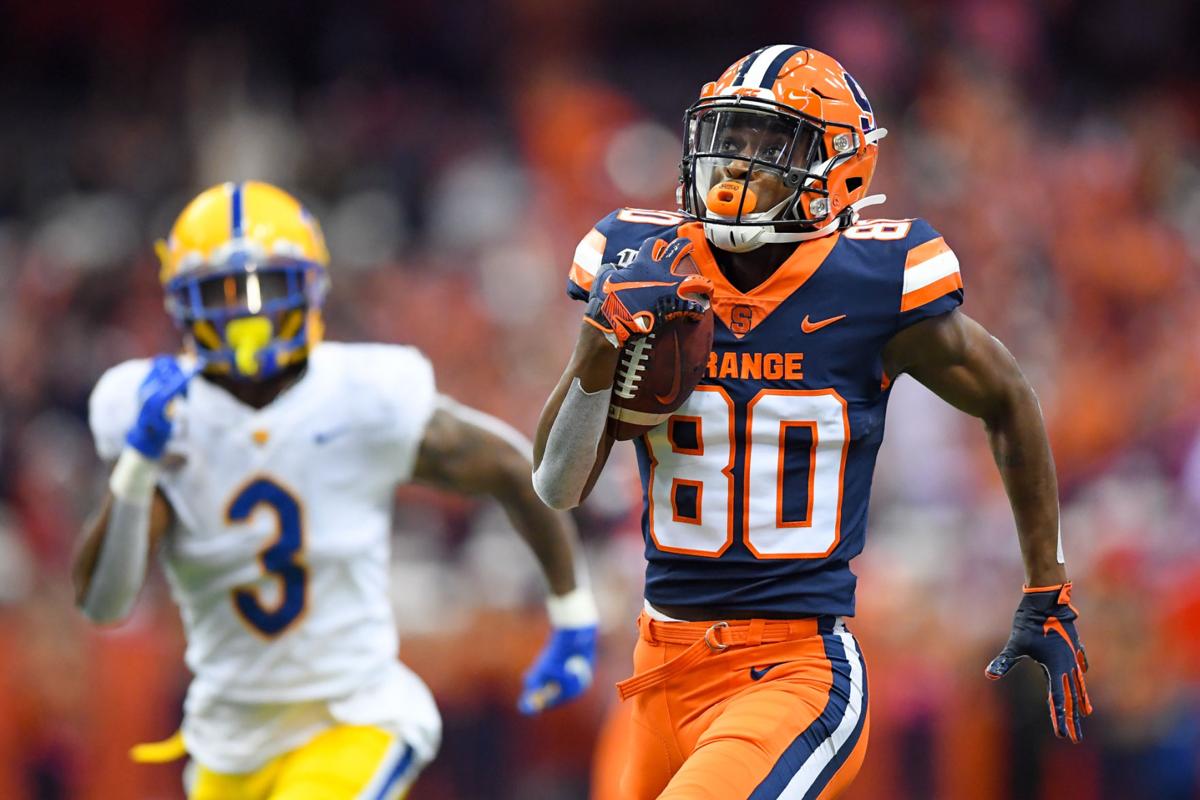 Syracuse wide receiver Taj Harris runs with the ball after a catch for a touchdown as Pittsburgh defensive back Damar Hamlin defends during the third quarter. Rich Barnes/USA TODAY Sports 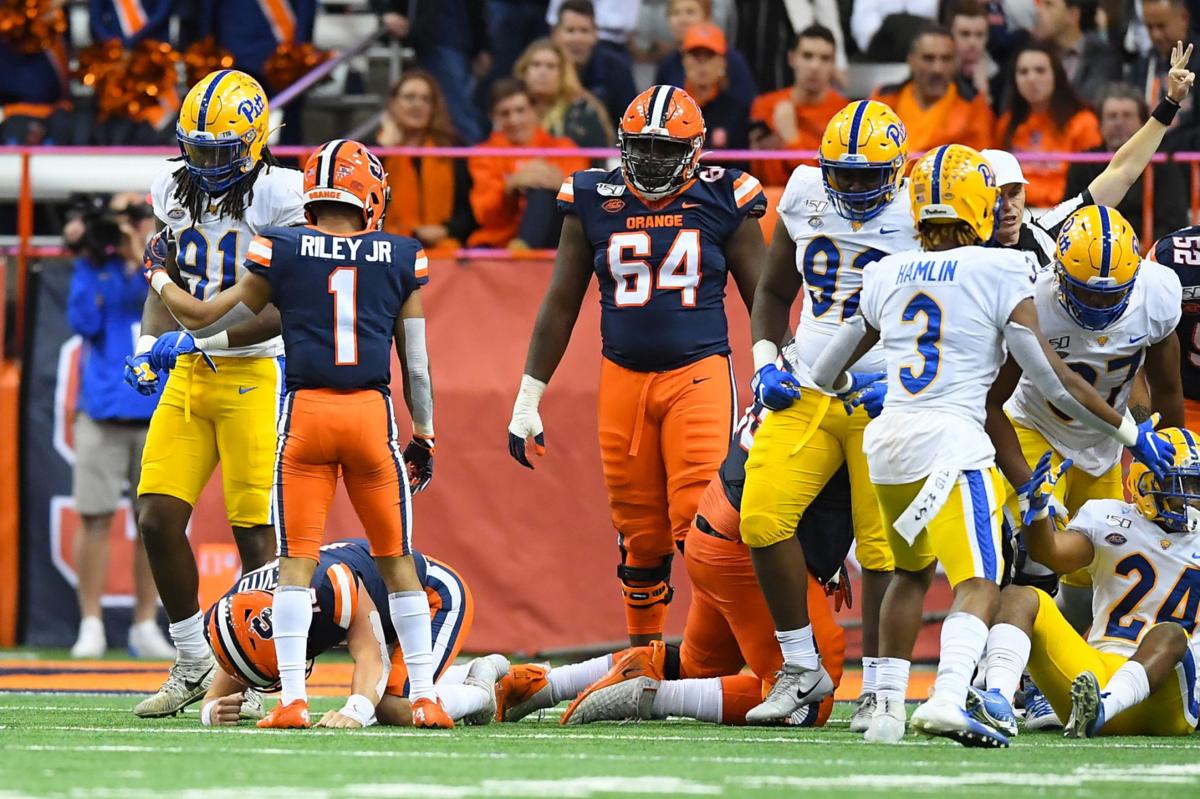 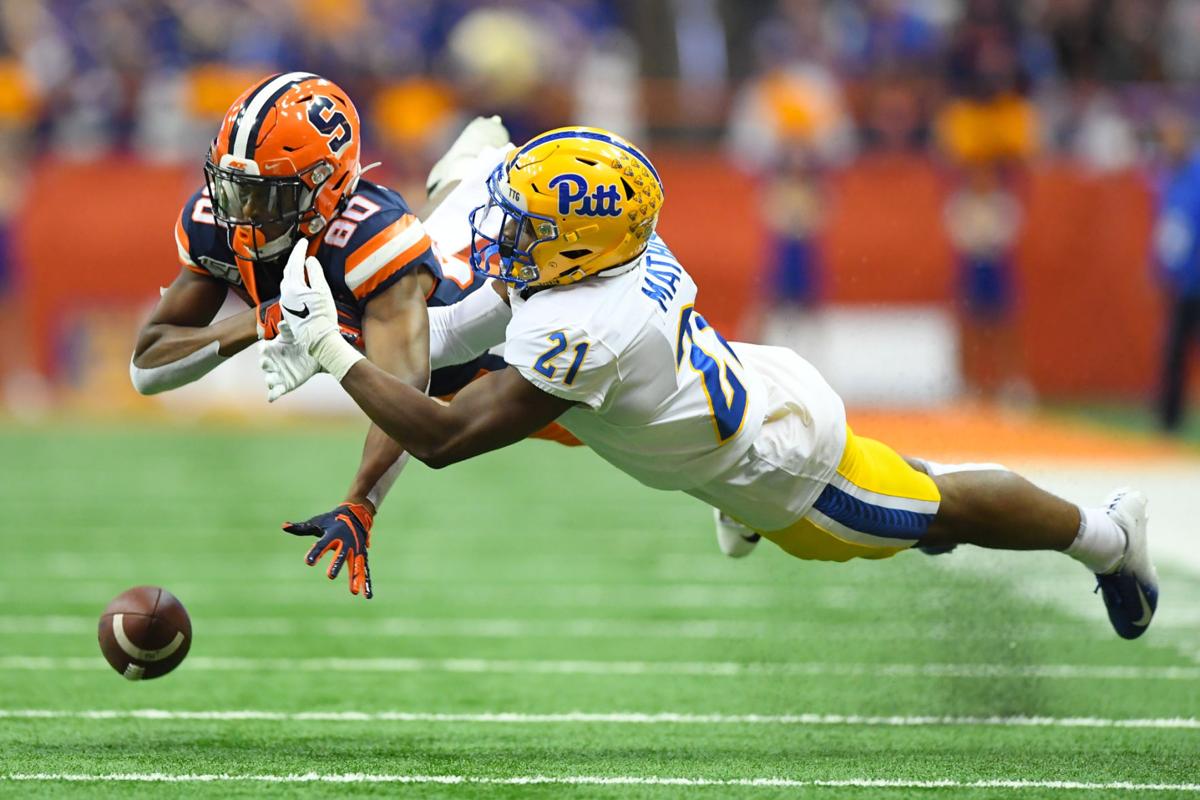 Syracuse wide receiver Taj Harris runs with the ball after a catch for a touchdown as Pittsburgh defensive back Damar Hamlin defends during the third quarter. Rich Barnes/USA TODAY Sports

SYRACUSE — Clayton Welch seized his opportunity at quarterback for the Syracuse University football team Friday night but was unable to complete a chaotic comeback bid against longtime rival Pittsburgh.

Welch replaced Tommy DeVito under center after the starter suffered a brutal hit to the shoulder at the end of a third-quarter run — the last straw for coach Dino Babers after watching his redshirt sophomore QB take yet another pummeling in the pocket — and led a pair of second-half scoring drives during the Orange’s 27-20 loss to the Panthers in front of an announced crowd of 44,886 at the Carrier Dome.

SU (3-4 overall, 0-3 ACC) surrendered a season-high nine sacks, including six takedowns of DeVito, and have yielded 35 sacks this season, which is the most in the FBS entering today’s games.

Pittsburgh (5-2, 2-1) has won five of the last six matchups and nine of the last 11 games between the former Big East rivals that squared off for the 75th time Friday.

Babers stated after the game that it was his decision to hold DeVito out for the remainder of the game after he endured the tough tackle, and that his health status would determine the starter moving forward. Babers said that DeVito wanted to return to the game and the medical staff didn’t rule him out.

“That was a really, really good shot,” Babers said. “That was enough for me. I didn’t need to see him go through that again.”

He added: “We’ve got to see how guys heal up, it’s not fair to either one of those guys or fair to me until we go watch the tape, and go see how they heal up. If you’re asking me who’s better, I know who’s better, now we got to see who’s healthy.”

Welch completed 8 of 20 passes for 176 yards and two touchdowns, adding 36 net rushing yards on 10 carries to finish as SU’s leading rusher. Welch saw a handful of plays in the first half, mostly utilized on designed runs, but re-entered the game for good on the opening series of the second half following the hit on DeVito, which sent the starter to the sidelines holding his arm and shoulder.

On his first play back, Welch found Taj Harris for a 94-yard touchdown pass that sent the Dome crowd into a frenzy and cut the Pittsburgh lead to 24-13 early in the third quarter. The pass marked the first career TD pass for the redshirt senior.

“We were running a lot of sit routes and I saw the corner sit on it,” Welch said of the play. “I threw it up and Taj made a great play on it. I tried to beat him down there to the end zone (to celebrate) but he’s a little faster than me.”

In the fourth quarter, Welch connected with Aaron Hackett on a seven-yard TD pass to cut the Pitt advantage to 27-20 with two minutes and 44 seconds left.

SU defensive lineman Kenneth Ruff appeared to force and recover a fumble after stripping Panthers’ running back A.J. Davis on the ensuing Pitt drive, but the play was overturned and Pittsburgh was able to successfully run out the clock to secure the victory.

“The outcome didn’t go how we wanted but being around our fans was great, we had a great fight in our team,” Welch said. “I think it went well for the most part and I made the most of my opportunities.”

DeVito finished 11 of 23 for 101 yards and was sacked six times, while the SU rushing game was stifled again and gained just 51 net yards on 34 attempts. SU has allowed 25 sacks in its three ACC games, surrendering at least eight in each outing.

“Right now, everybody’s job is in jeopardy,” Babers said of his embattled offensive line. “We’re going to go through the tape and if guys are not doing the job they need to do then we need to start getting some other guys in there. It’s not fair to keep playing the same guys if the results don’t change.”

A.J. Davis ran for 103 net yards and a five-yard touchdown on 16 carries for the Panthers, while Kenny Pickett completed 18 of 33 pass attempts for 232 yards and a pair of touchdowns — a 43-yard score to Aaron Matthews followed by a 14-yard pass to Maurice Ffrench that gave Pitt a 24-6 edge going into halftime.