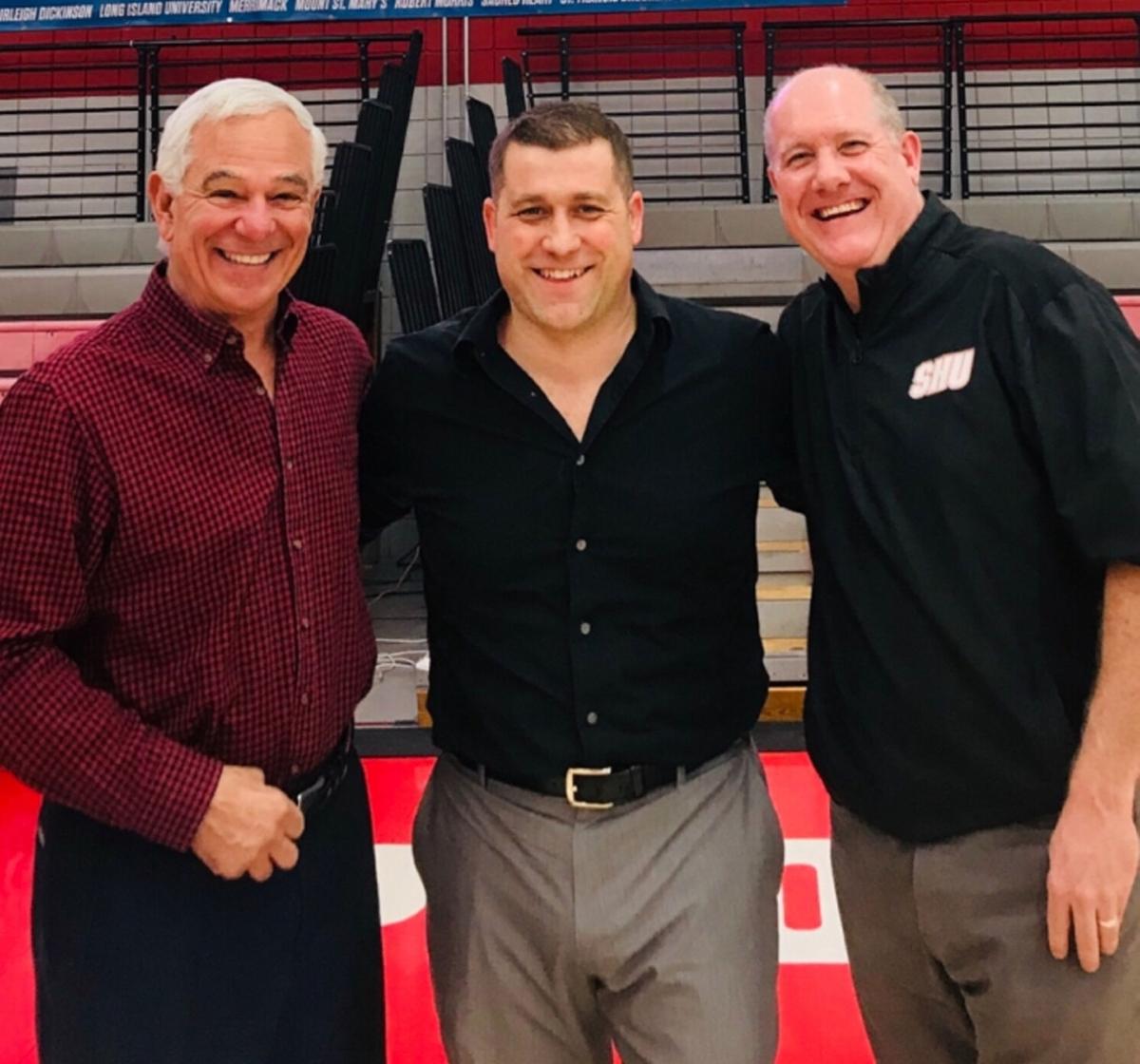 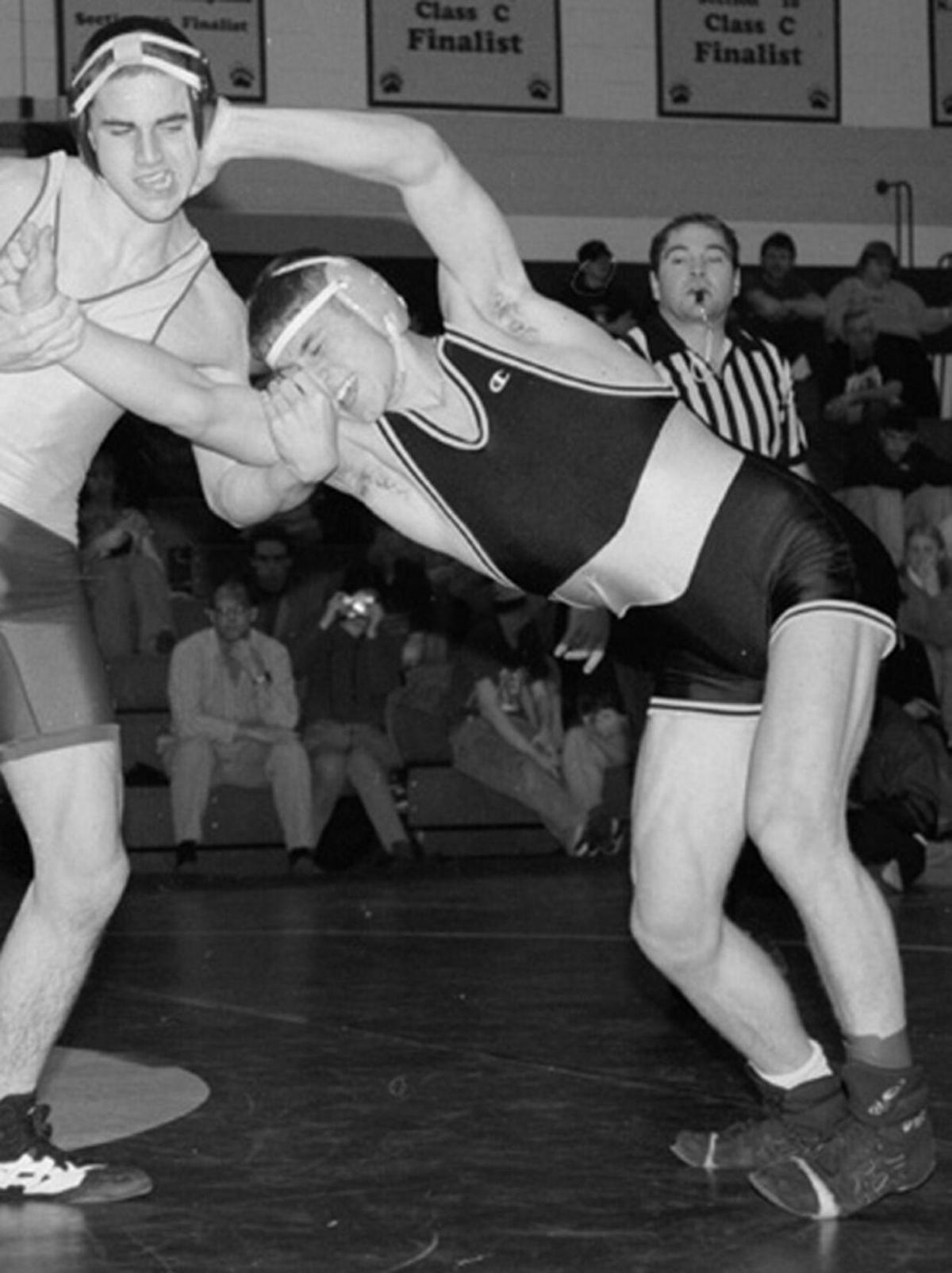 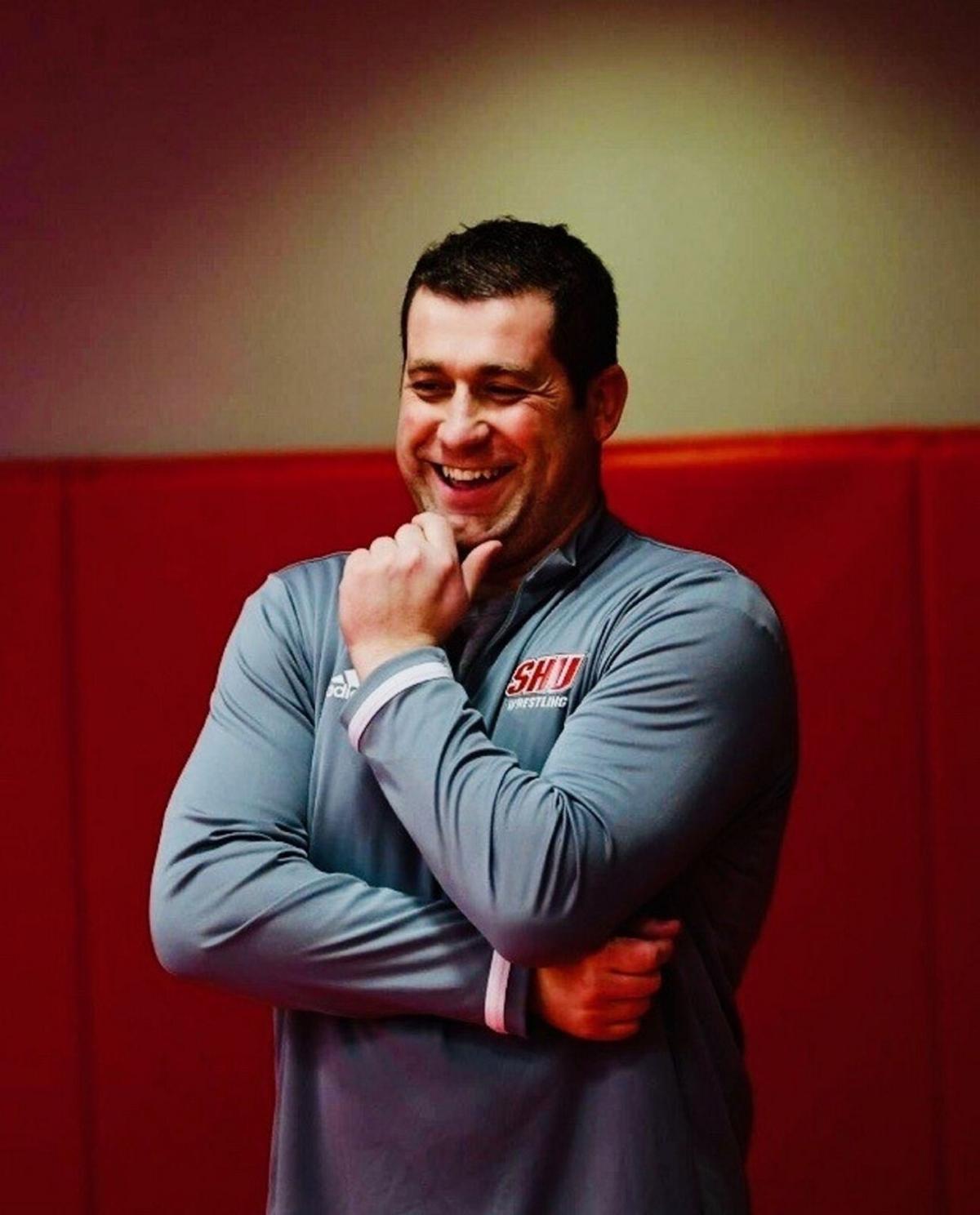 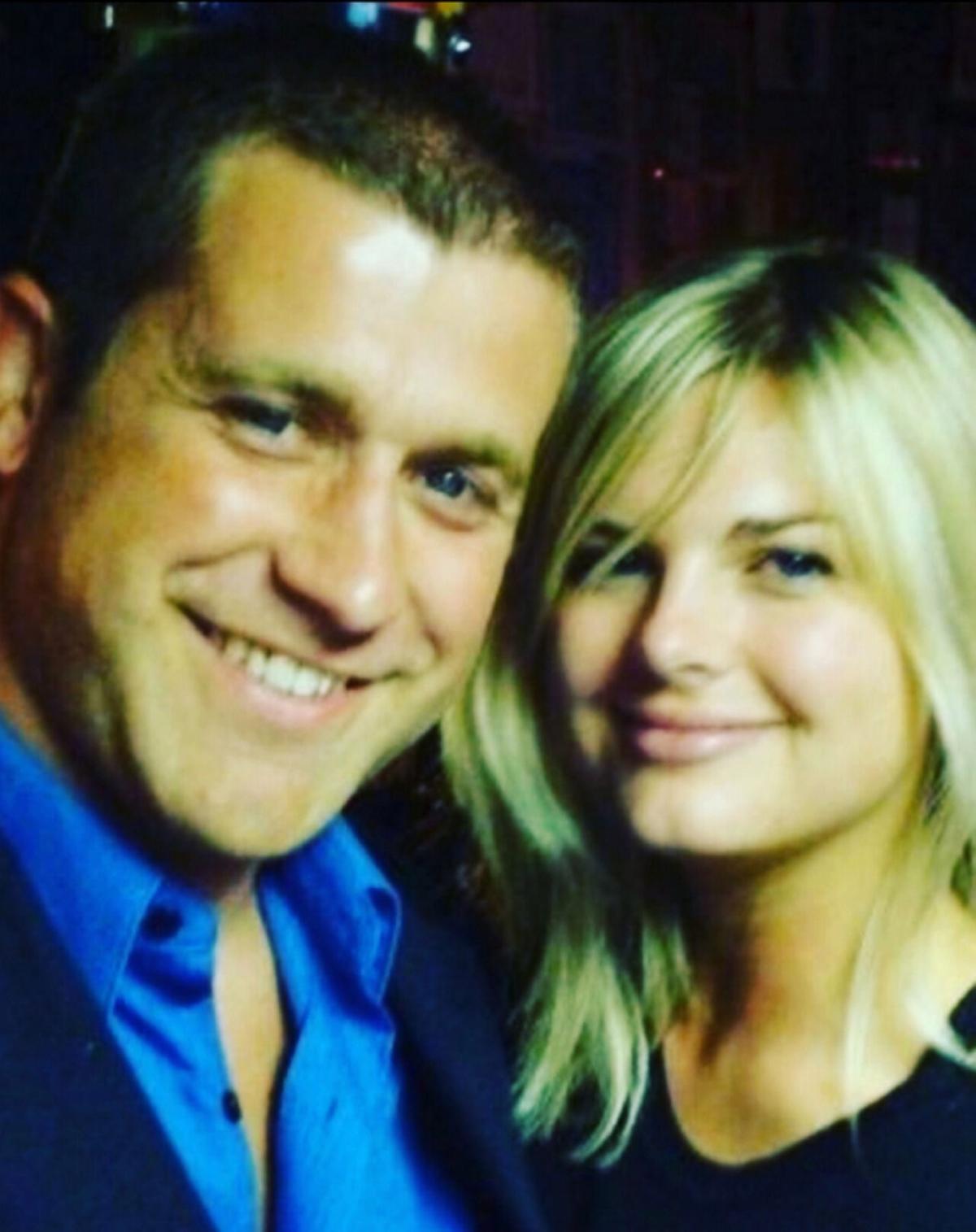 EDITOR’S NOTE: This is the third in a series on north country athletic stars of the past.

Walk into the office of Sacred Heart wrestling coach John Clark and you might notice some rocks on his desk.

Clark, a Canton native, has written his goals on rocks ever since he was a kid. He said a friend once came to his bedroom and saw “state champion” written on a rock and pointed out that Clark had not won a state title.

That was the point, it was the next goal for him to achieve, and by the time he left Canton High School he was Section 10’s first state champion and finished with titles his junior and senior years.

He comes from a wrestling family. His older brother, Mitch, won a national title at Canton and at Ohio State and his younger brother, Charlie, won a high school national title at the Blair Prep School. His father was a longtime St. Lawrence University wrestling coach, as well as the school’s athletic director, leading the Saints to a national championship in 1988.

Clark took over a Sacred Heart program with 16 wrestlers prior to the 2017-18 season and his first group finished 2-10 in dual meets. Sacred Heart improved to 5-7 in his second year and now the NCAA Division I Pioneers have the largest roster (50) in the nation, going 8-6 last year.

“I am thankful for the previous coaches getting the program to where they got it to,” Clark said. “I leaned on them. They were very good in the transition. I was really happy to see the athletes get excited about what we were trying to accomplish. I knew we had a big task ahead of us. The way the roster has grown is just getting kids on campus (in Fairfield, Conn.). My toughest battle is getting them to see the campus. Once they get on, and I win that battle to have them take a visit, I know I have a good chance of landing that recruit. It doesn’t have much to do with me, but how nice the school is and how the location of the school is nearly perfect, near New York, New Jersey and New England. If you had to put a tack on a map of where you’d like to start a program, you’d pick here.”

Clark grew up watching his father recruit wrestlers to SLU and also went through the process as a recruit to Ohio State. He then helped recruit when he was an assistant at Stanford, Lehigh and Brown.

“The No. 1 thing I look for is love for the sport,” Clark said. “I look at it like how much are you going to work in comparison to your competition? Any coach wants to land the top recruits, but that doesn’t guarantee they’ll be the hardest workers. I am focused on work ethic, get to know the family, ask their peers what they think about them. I almost embrace the kid that has something to prove. A lot of student-athletes have a lot of success because they are still hungry.”

John Clark Sr. has seen his son prove out the work ethic he seeks, and a lot of his son’s approach to coaching comes from lessons he learned at home.

“There are no trophies in our house,” Clark Sr. said. “I always believed trophies, when you have them around you, inhibit your ability to get better. It doesn’t prevent it, but it inhibits it when you look at that stuff all the time. Johnny took it to another level, he not only got rid of his trophies, he would give away Ohio State trophies to (disabled kids) at the ARC in Canton.

“He’s a good coach. His team respects him. He’s a thinking coach. He has the perfect pedigree when you think about it. He’s been at three great universities to hone his coaching skills. He has been under some pretty remarkable coaches, starting with his college coach, Russ Hellickson, in the Big 10. He’s very methodical. His team is well-coached. I’ve been to some practices and he runs a very good practice.”

Clark, who turns 40 on Aug. 28, learned a lot from his dad, but he also credits former Canton High School coach Neal Riggs for what he knows about wrestling and coaching.

“Discipline and hard work were his forte,” Clark said of Riggs. “He ran a tight ship. He knew we’d be well-conditioned. Some of his high school practices I still remember to this day, how tough they were. He knew how to keep you mentally strong, make you tough and have that confidence to be in good shape. When you are not in tremendous shape it can be scary when you compete in any sport. He was a phenomenal motivator and I carry that with me.”

Wrestling has been Clark’s athletic and professional life, but his early goal was to play on the SLU men’s hockey team for former coach Joe Marsh.

“People still remember me as a hockey player, which is kind of funny,” Clark said. “Growing up in Canton with SLU, it is basically a hockey town. I feel like it was a rite of passage for many people to play hockey. I had a tremendous passion for it and still do. It was something that was a big decision. It was a decision I had to make at an early age and in part it was made to appease or satisfy my family, not that I was forced into that. It was my decision, being from a wrestling family. I knew I loved hockey but I knew I had a unique talent in wrestling. I don’t skate as often as I would like, but I am amazed, it’s like riding a bike. I get on the ice and I just go.”

Baseball has also played a big role in Clark’s life as the man who hired him to coach Sacred Heart was former Major League Baseball player and manager Bobby Valentine, the school’s athletic director.

“It’s a dream come true, you can’t make that stuff up to have your first job as a head coach be for Bobby Valentine,” Clark said. “That’s just crazy. We have a great relationship. We had lunch a year after I worked here and we were just talking and he said, “I want coaches to ask me more for advice.’

It was so true because in baseball you call it a manager, but in essence he is a coach. He knows so much about coaching and leadership. He comes to every single one of our home matches and he knows a lot about wrestling. To have someone of his stature care about and know the names (of people) involved in the sport is great.”

Clark, who was a ball boy for SLU’s 1999 men’s soccer national championship team, may not get to come home as often as he would like, but Canton and the north country is still a special place for him.

“I love the people there,” Clark said. “The number one thing I remember is how supportive the community was, even though I was in a sport not everyone understood. They did understand what I was trying to do. I was surrounded by a lot of student athletes who were trying to do the same things, but might have been in other sports.

“My junior year the high school hockey team won a state title the same weekend that I did. When I won people congratulated me. A lot of people had been reading about what was happening. People I never thought I knew, or cared, were giving me flowers, writing me notes, showering me with praise. I didn’t know how they knew who I was, but they took the time to congratulate me. That is Canton and Potsdam.”