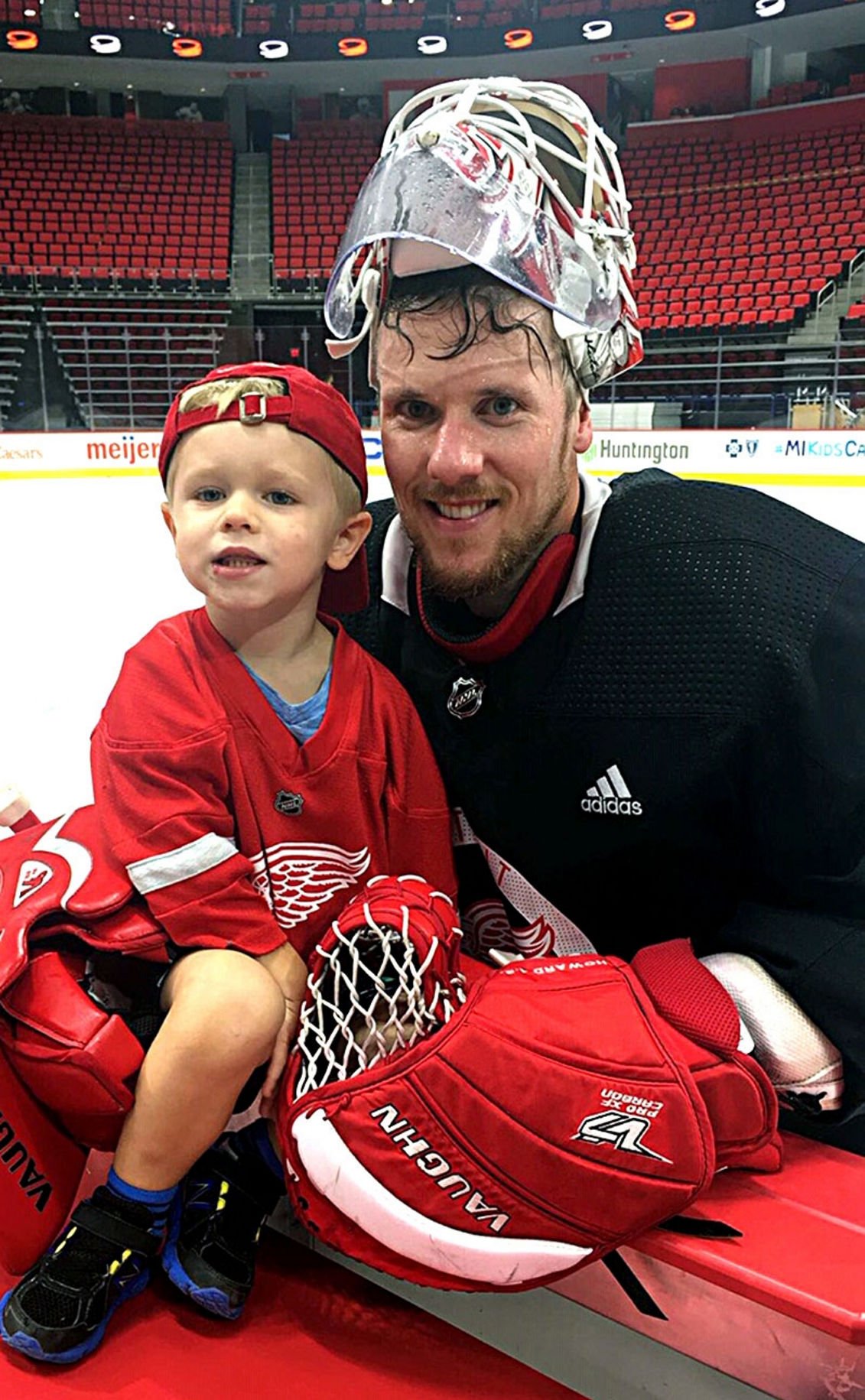 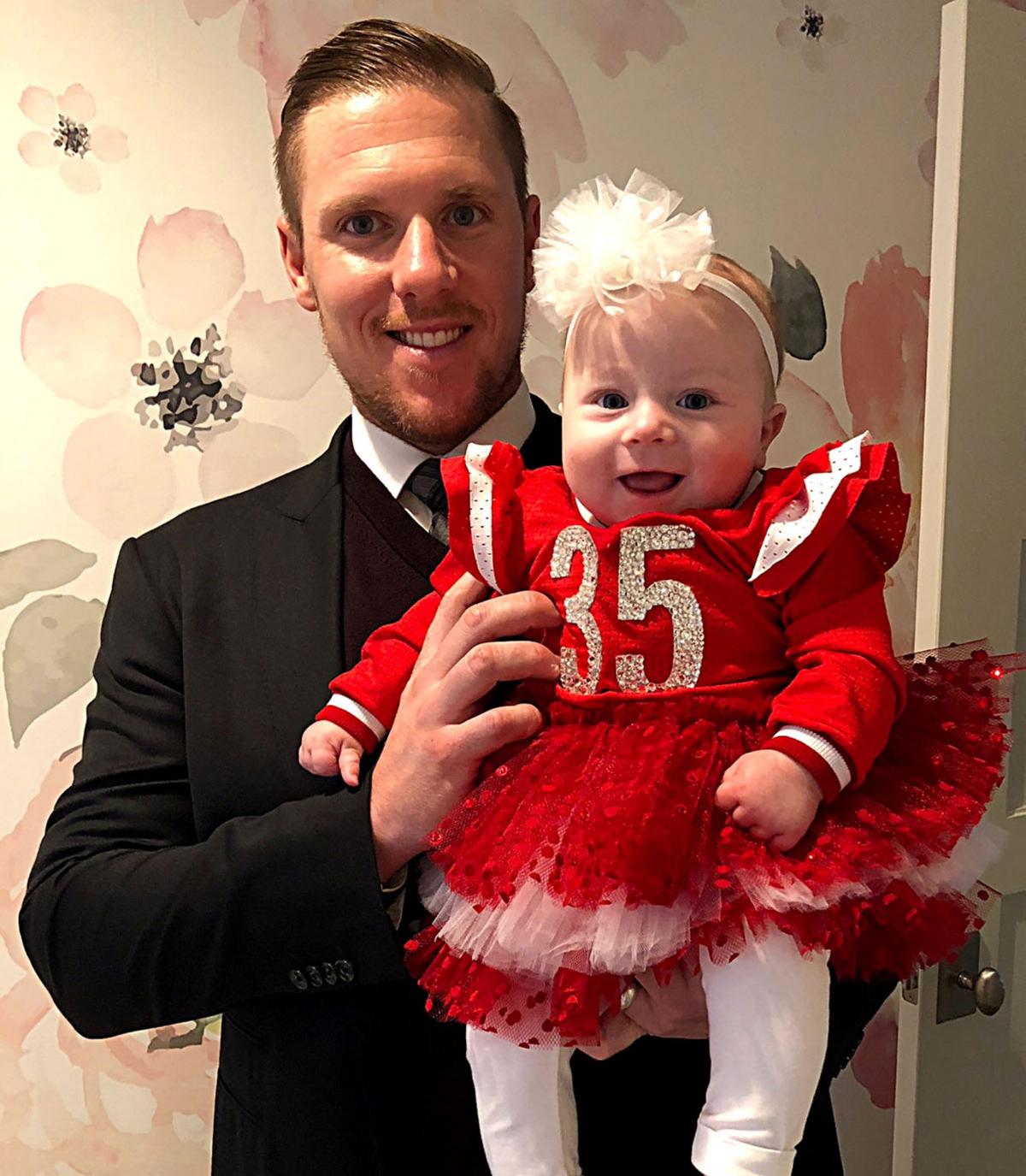 Jimmy Howard and his daughter Olivia are dressed to the hilt for Olivia’s first Detroit Red Wings’ game. 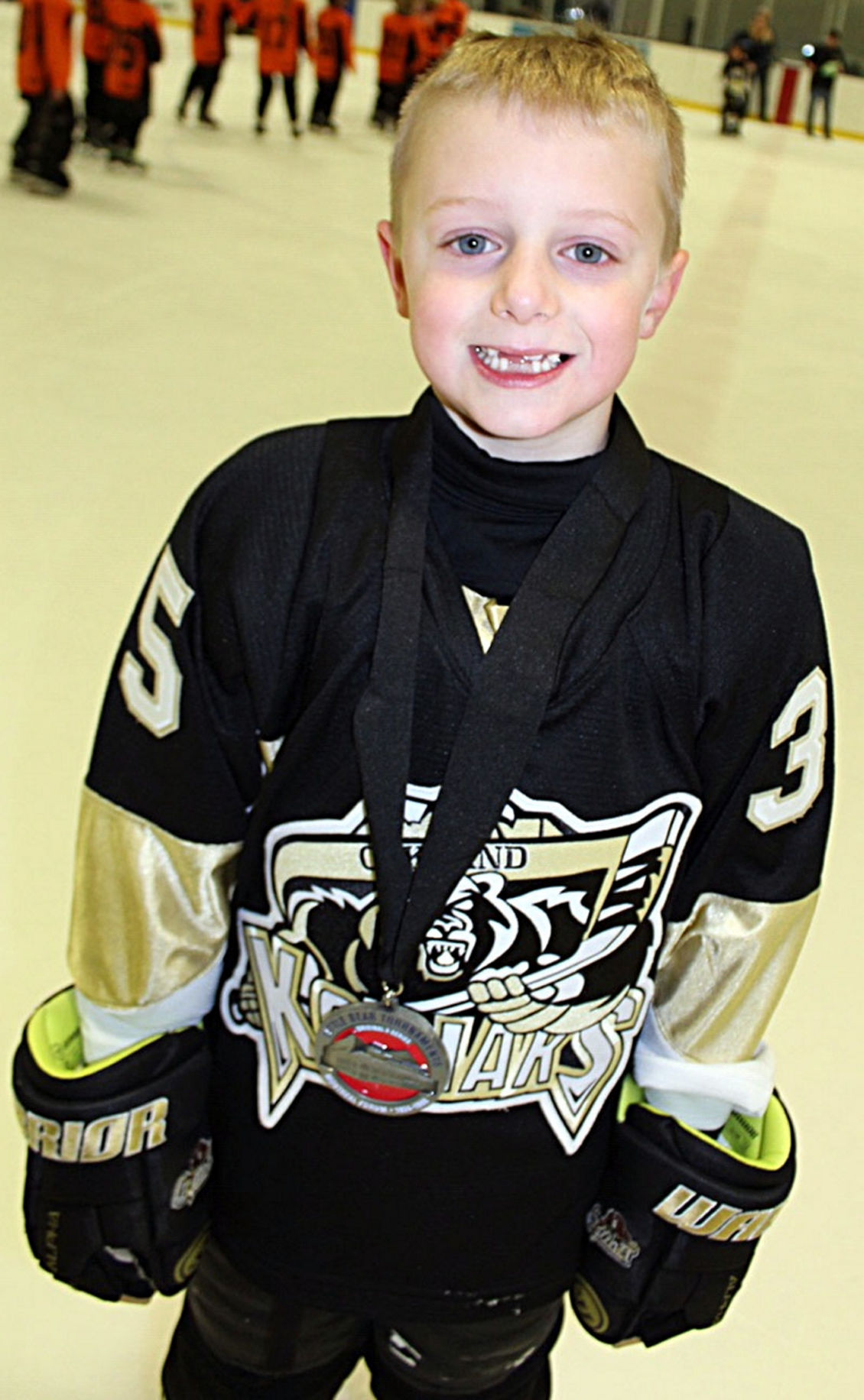 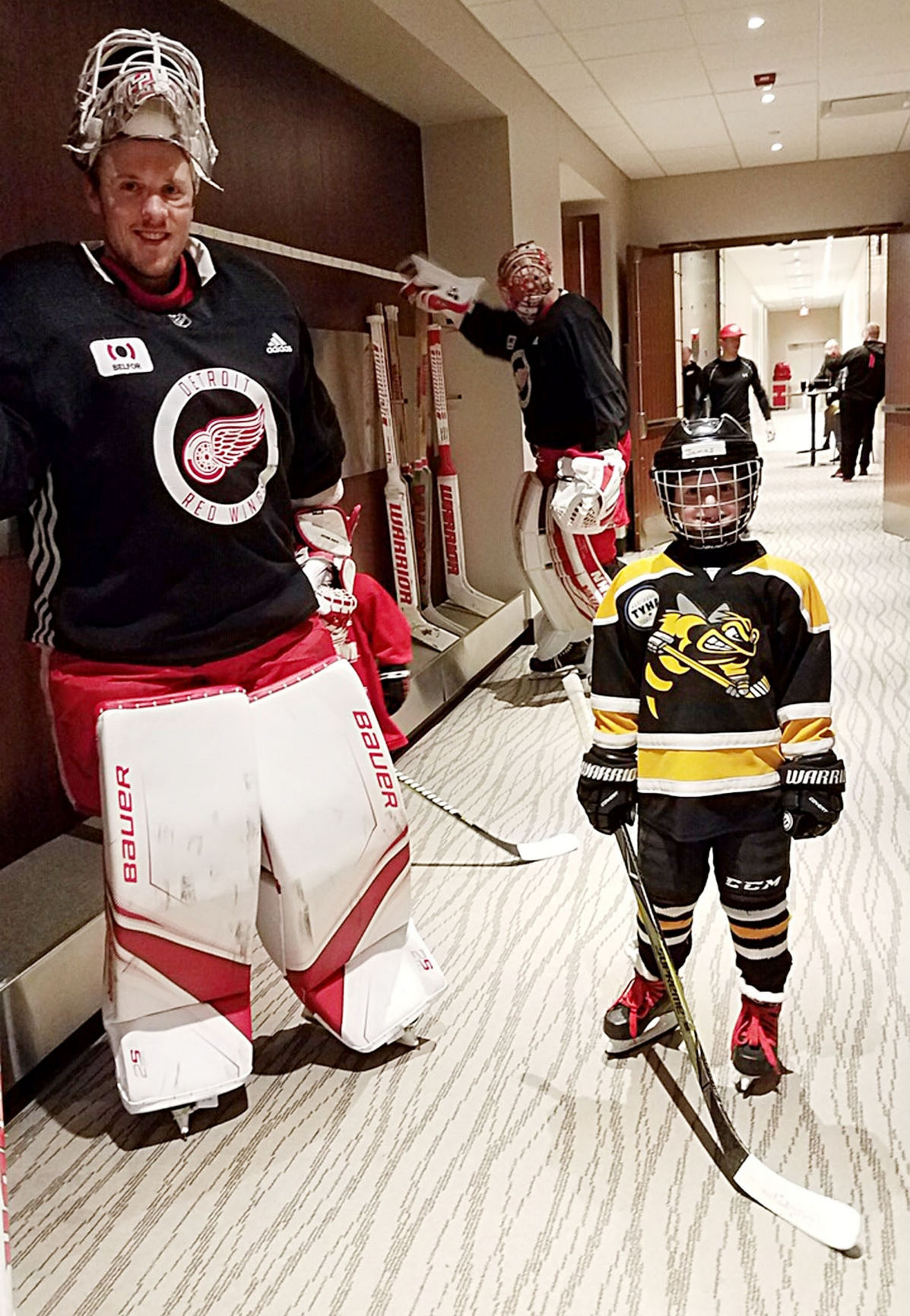 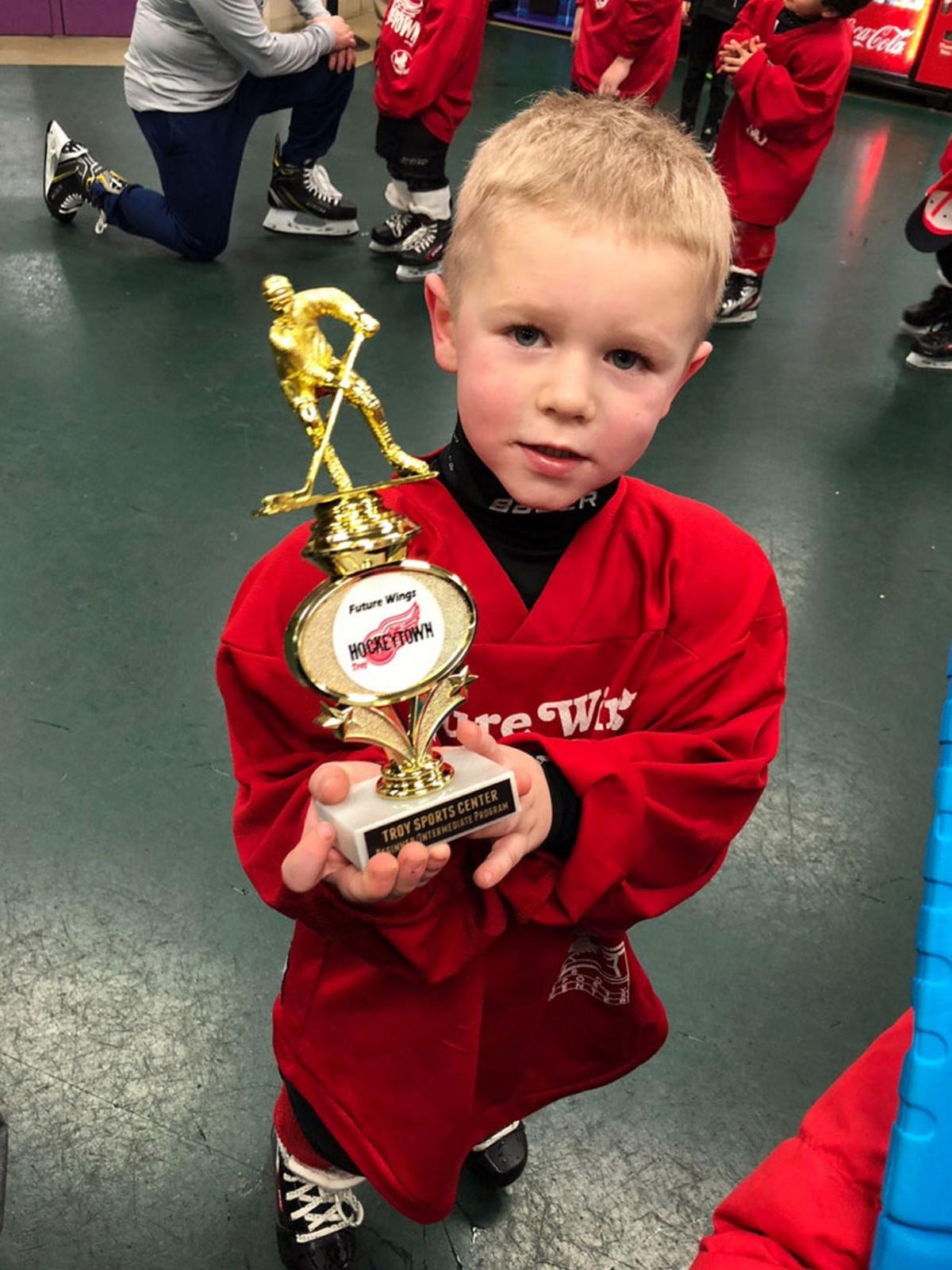 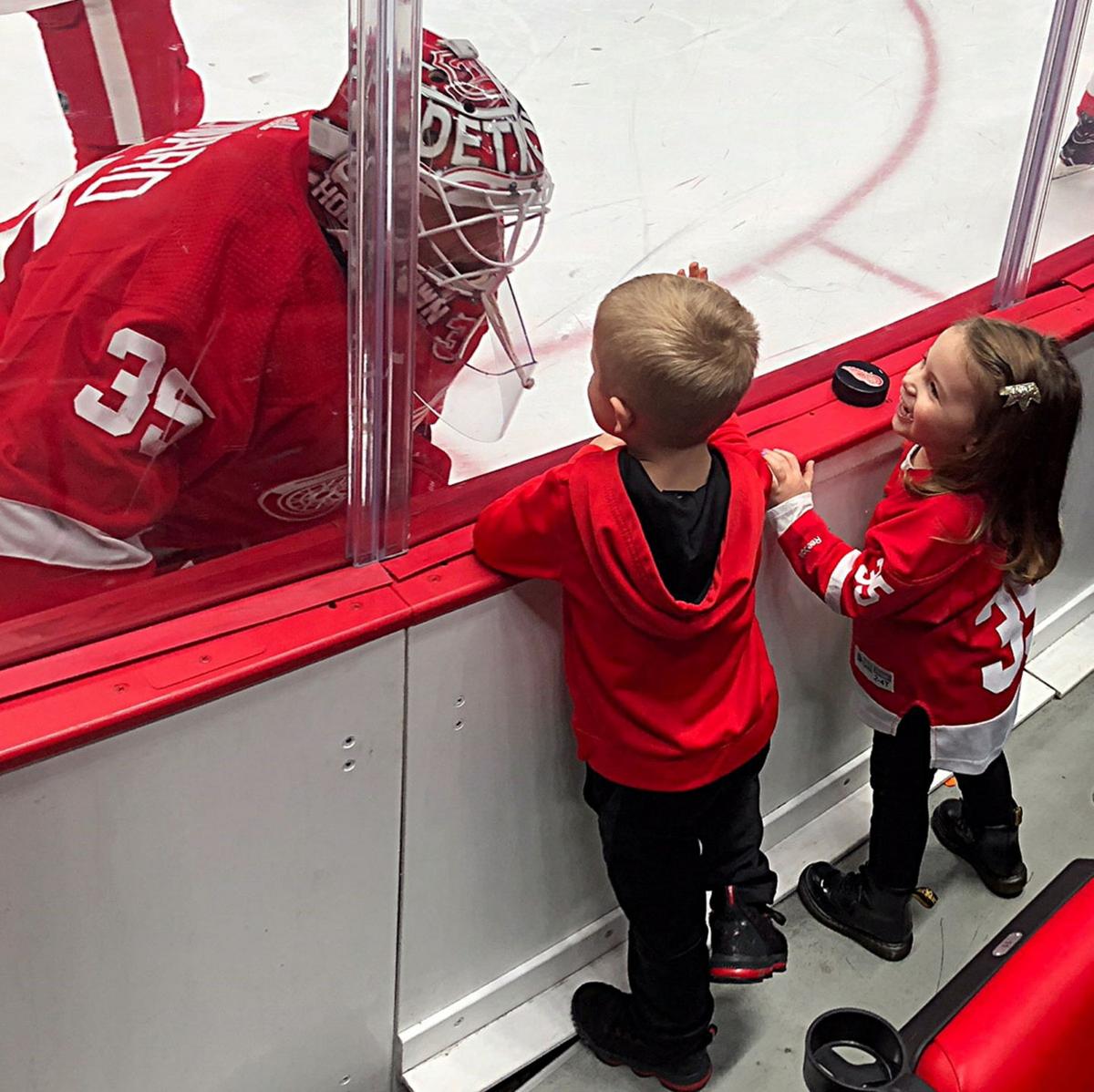 PROVIDED PHOTO Detroit Red Wings goalie Jimmy Howard says hello to son Henry and his neice Ady, the daughter of his sister Katy, during the warmup for a recent Wings' game.

Jimmy Howard and his daughter Olivia are dressed to the hilt for Olivia’s first Detroit Red Wings’ game.

PROVIDED PHOTO Detroit Red Wings goalie Jimmy Howard says hello to son Henry and his neice Ady, the daughter of his sister Katy, during the warmup for a recent Wings' game.

Jimmy Howard was extremely honored, on Wednesday, to be selected as one of the Atlantic Division goalies for the 2019 NHL All-Star game.

But the Ogdensburg native and OFA graduate is not letting it distract him from his central focus of helping the Detroit Red Wings move up from their seventh position in the Eastern Conference.

But his sons James, 7 and Henry, 4 are another case all together. They are counting the days for a family trip to California for the All-Star Classic which will be hosted by the San Jose Sharks on Jan. 26.

“I think the boys are definitely more excited than me and that is makes it so special. I take them to the rink all of the time, they are friends with our players and they are starting to learn the players around the league,” says Howard.

“It is all about about the boys and that I can share this with them.”

Howard earned his third all-star selection to go along with selection to the 2014 United States Olympic team. He played in the 2012 All-Star Game in Ottawa and was selected for the 2015 game in Columbus but was unable to play because of an injury.

Howard and Montreal’s Carey Price, earning his seventh all-star spot, were chosen by the NHL Hockey Operations Department to be the goaltenders for the Atlantic Division Team. Price withdrew from the game Monday because of an injury.

“It is a true honor to be able to go and represent this organization in the All-Star game,said Howard. “I think Larks (Dylan Larkin) deserves to be there probably even more.”

Larkin can still earn selection by a fans vote through Thursday which picks one final player for every division team. Howard has pledged to run a social media campaign to help his teammate get elected.

“I would love to play in the all-star game with Howie. His sons James and Henry are so excited and they are around the rink a lot. I would love to be there with them,” said Larkin in a media interview after scoring an overtime goal in an overtime win over Nashville on Friday.

James Howard, 7 has begun his competitive playing career with the Oakland Kodiaks’ organization while Henry, 4 is involved in an entry level program. Both boys skate in the Future Red Wings’ practices. Jimmy and Rachel Howard are also parents of a young daughter Olivia who wears her number 25 jersey-dress for Red Wings’ games.

“It is going to be so much fun to go to the all-star game with my family and my dad (Jim Howard) is planning to go,” says Howard.

According the to the format used for the past four years, the NHL All-Star Game is a single elimination tournament of 3-on-3 games between teams from the four divisions: Atlantic, Metro, Central and Pacific.

“I have never played in this all-star format but it is the same format we use in overtime. The games use 10 minute periods,” says Howard. “Anytime you can play with and against the great players of the this league it is such a great honor. I am just planning to enjoy it all.”

“I’d say Jimmy is rewarded for the work he’s put in over the last three and one-half years. I told him I’m real proud of him and real happy for him,” Blashill said. “Everybody in this room knows there was a time where it looked like he was going to be a backup and he decided to change his game, go to work, be mentally tough, hang in there, stay with it, just keep working and get better.

Really, it’s a lesson we could use as a hockey team right now. You got to be resilient. You got to find ways to keep getting better and you got to stay mentally tough and work. I think it’s great for Jimmy.”

On the night of his selection Howard played well stopping 27 shots in a 5-3 loss to Pacific Division leading Calgary which included an empty net. He then backstopped the 3-2 overtime win over Nashville where Larkin scored the game-winner. On Sunday Howard made a 31 saves in a 2-1 loss to the reigning Stanley Cup champions Washington Capitals. The Wings play Montreal tonight.

All three games continued a pattern of Howard consistently giving a young Red Wings (16-21-7) team a chance to win.

“The margin for error is so small and you can only get better in this league by eliminating mistakes. And that starts from the back forward. We all just have to keep working hard to get better,” said Howard who now stands at 11-11-0 on the season with a 2.78 goals against average and a .917 save percentage.

Other members of the Atlantic Division team chosen by the NHL Operations Board are: