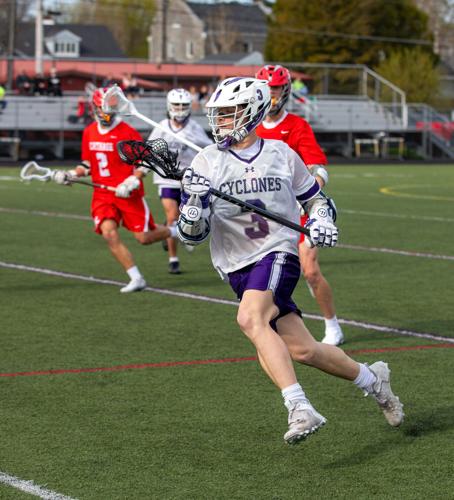 Watertown’s Jack Clough eyes the ball as he carries it up field in Thursday’s game against Carthage at Watertown High School. Kara Dry/Watertown Daily Times 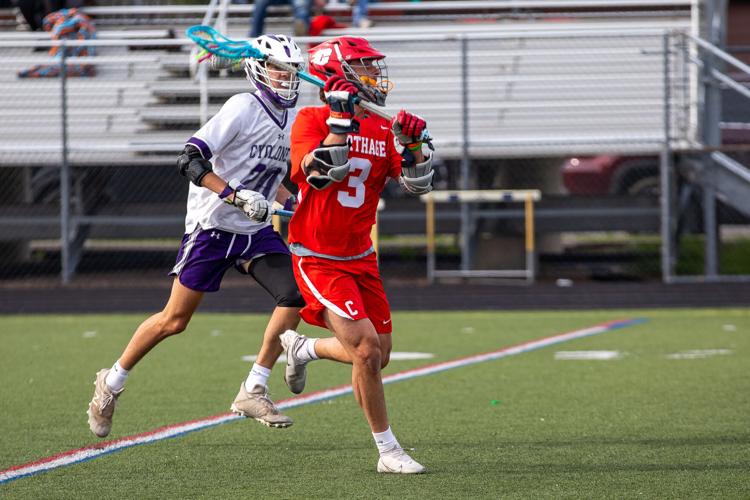 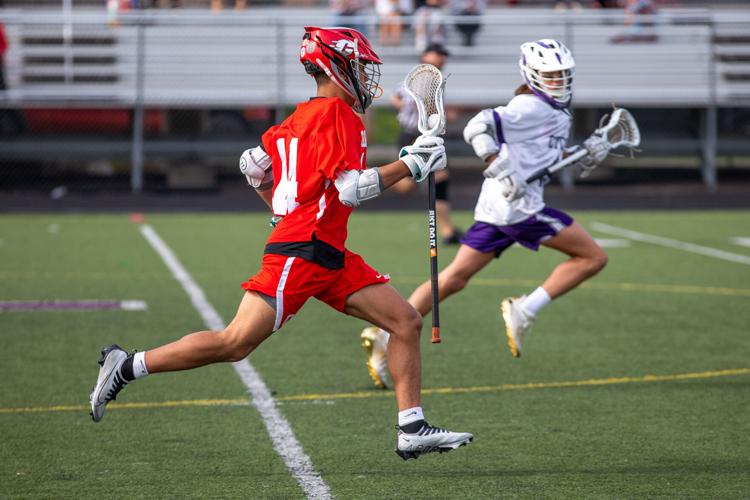 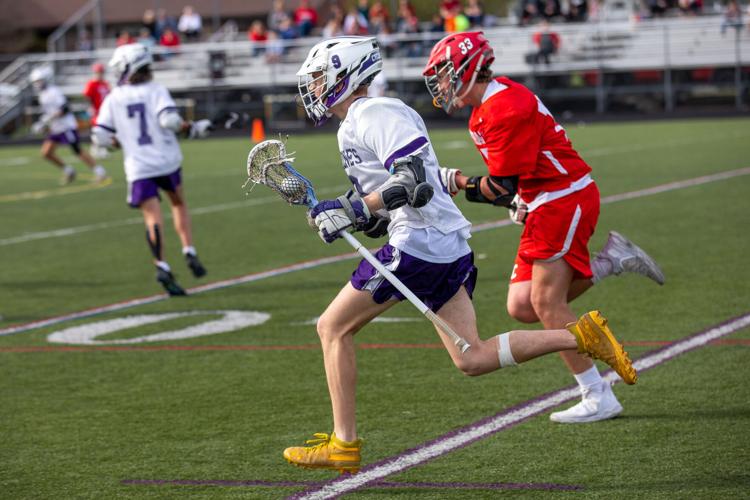 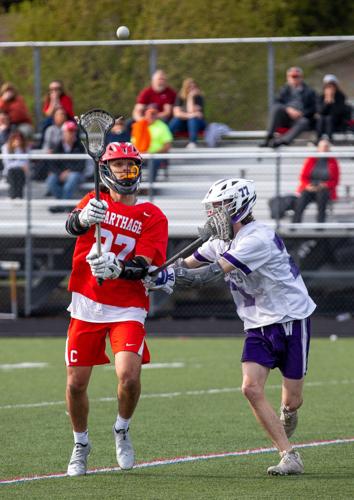 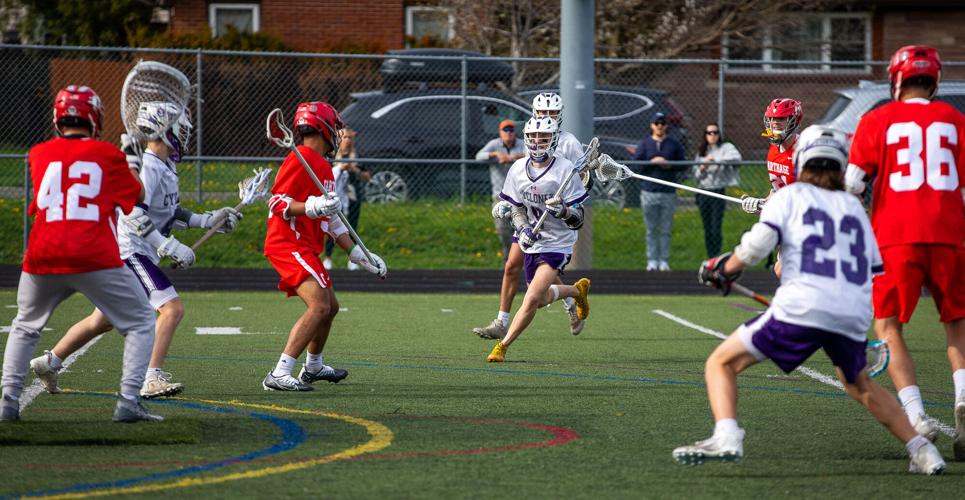 Watertown’s Jack Clough eyes the ball as he carries it up field in Thursday’s game against Carthage at Watertown High School. Kara Dry/Watertown Daily Times

Clough scored six goals and O’Donnell generated four goals and assisted on two others to propel the Cyclones past the Comets, 20-11, in a Frontier League game on the Case Middle School turf field.

Watertown swept the season series with Carthage and improved to 9-2, including 9-0 in the league, and clinched at least a share of the league title.

“It’s nice, but we’re used to it,” O’Donnell said. “Always, it’s a big rivalry, we love to win against Carthage This was a big one.”

“I like that we can put a lot of goals on them and just have a great team win, but the job’s not finished,” Watertown junior defender Joe Girardi said.

The Cyclones also won their sixth consecutive game against the Comets, dating back to 2019.

“Watertown is incredibly talented offensively,” Carthage coach Jason Coffman said. “They don’t have a guy that you can leave open and that means trouble for us.”

Carter Kempney, who is bound for Syracuse University after his senior season, scored six goals and assisted on another for Carthage (8-4, 6-3).

“Carter’s phenomenal and he’s going to get his (goals) and the way we played tonight is what I knew he was capable of,” Watertown coach Brian Navarra said. “He was hard to stop and even with Girardi on him and everybody helped him. He’s able to go through everybody, but we knew we needed guys to step up on the offensive side of the field and they did.”

Carthage hung with Watertown for much of the first half as it tied the score a 5-5 on Kempney’s goal with 4 minutes, 12 seconds left in the second quarter.

Watertown responded by scoring the last three goals of the half, including goals from Rathbun and O’Donnell in 15 seconds to lead 8-5 at the break.

“This was the best Mick’s played all year,” Navarra said. “He really did a nice job, he was unselfish, he drew some slides and he moved the ball and finished very nicely. And today, honestly, our attitudes were great, and that goes a long way for this team, that’s going to help this team go along way, playing as a team and playing unselfish.”

The Cyclones continued the momentum, going on a 7-0 run, and scoring the first four goals of the second half, including back-to-back tallies from Clough to open the period, to open up a 12-5 edge.

“We knew coming out of that (first half) that if we kept running and gunning, they were going to fall off eventually and that’s exactly what happened,” Clough said.

“That’s all our grit and it just how hard we work at practice and how much endurance we have and we just didn’t panic at all,” Girardi said.

Kempney followed with three straight goals, all unassisted, in a 2:18 span, to draw Carthage within 12-8 with 3:16 left in the third quarter.

But the Cyclones went on a 6-2 run to pull away, including an unassisted goal from Clough and a tally from Jack Adams to enter the fourth quarter with a 14-8 lead.

“These guys are a very tough matchup for us,” Coffman said of Watertown. “They move the ball so fast and they get the ball up the field.”

Led by Girardi on defense, the Cyclones held the Comets to only five goals in the first half and just six after the half. Goalie Patrick Duah, also a junior, finished with 13 saves.

“We do a lot of work in practice on defense and it shows in games,” Girardi said.

Carthage junior goalie Corey Decker made 27 saves, including 10 in the first quarter.

“The kids played really hard,” Coffman said of his team. “We had three kids out with sickness, we were a little out of tune with things we did defensively. Our goalie had 27 saves, that’s incredible, Corey Decker stood on his head and did everything he could.”

Watertown, which has three league games remaining, can secure the title outright with another win. The Cyclones won the league title outright last season after sharing the crown with Carthage in 2019.

“It’s getting kind of old for sure,” Coffman said of Watertown’s recent success against Carthage. “But you know what, they’ve earned it.”

“That’s what we talk about before games, we know Carthage is a great program,” said Navarra, whose team is ranked No. 1 in Class B in Section 3’s rankings. “When we played and back in the day, Carthage was dominant, no doubt about it. And for us as coaches who went through that and saw that, that’s how we motivate the kids these days when we play Carthage and it’s a credit to them. But our kids are on a good run right now.”

Noah Odett totaled four points, including three assists, and Lincoln Escudero scored a pair of goals for Carthage, which fell into a second-place tie in the league with General Brown, with three league games left.

“We have some huge Class C games left,” Coffman said. “We need to get healthy and play better to have any shot at making a run in sectionals.”