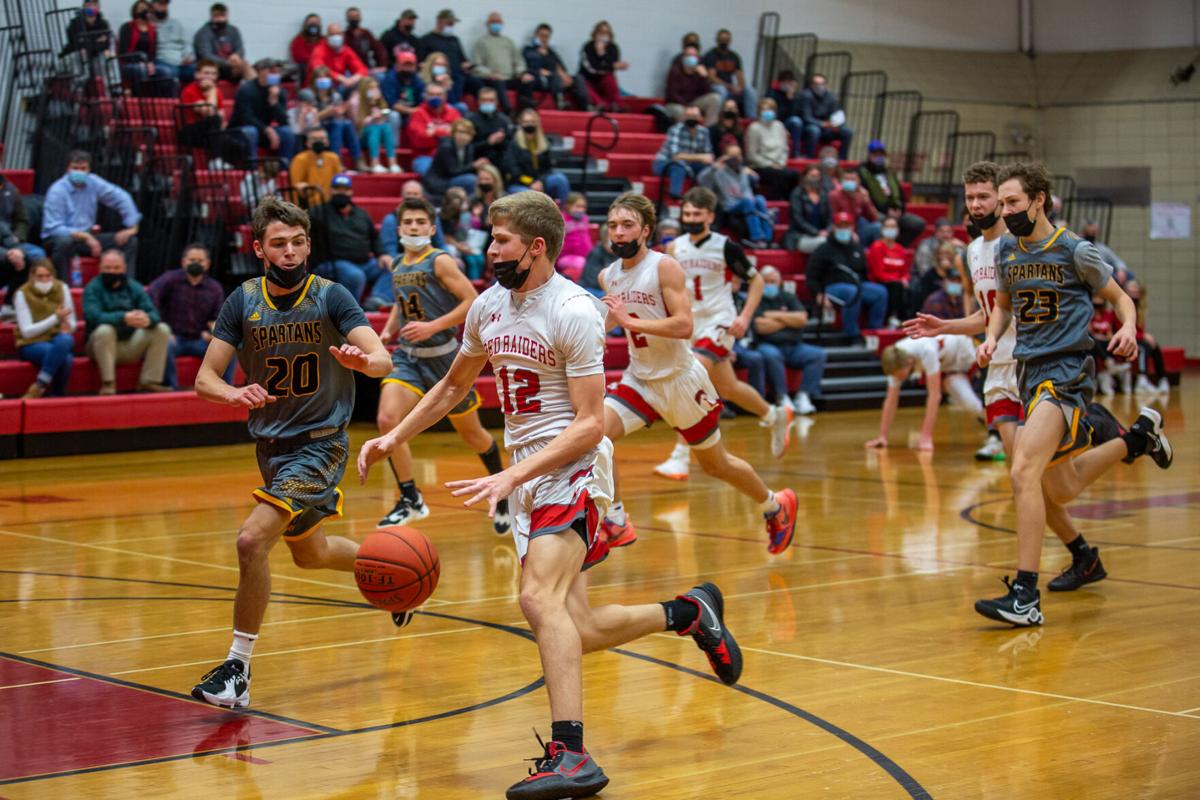 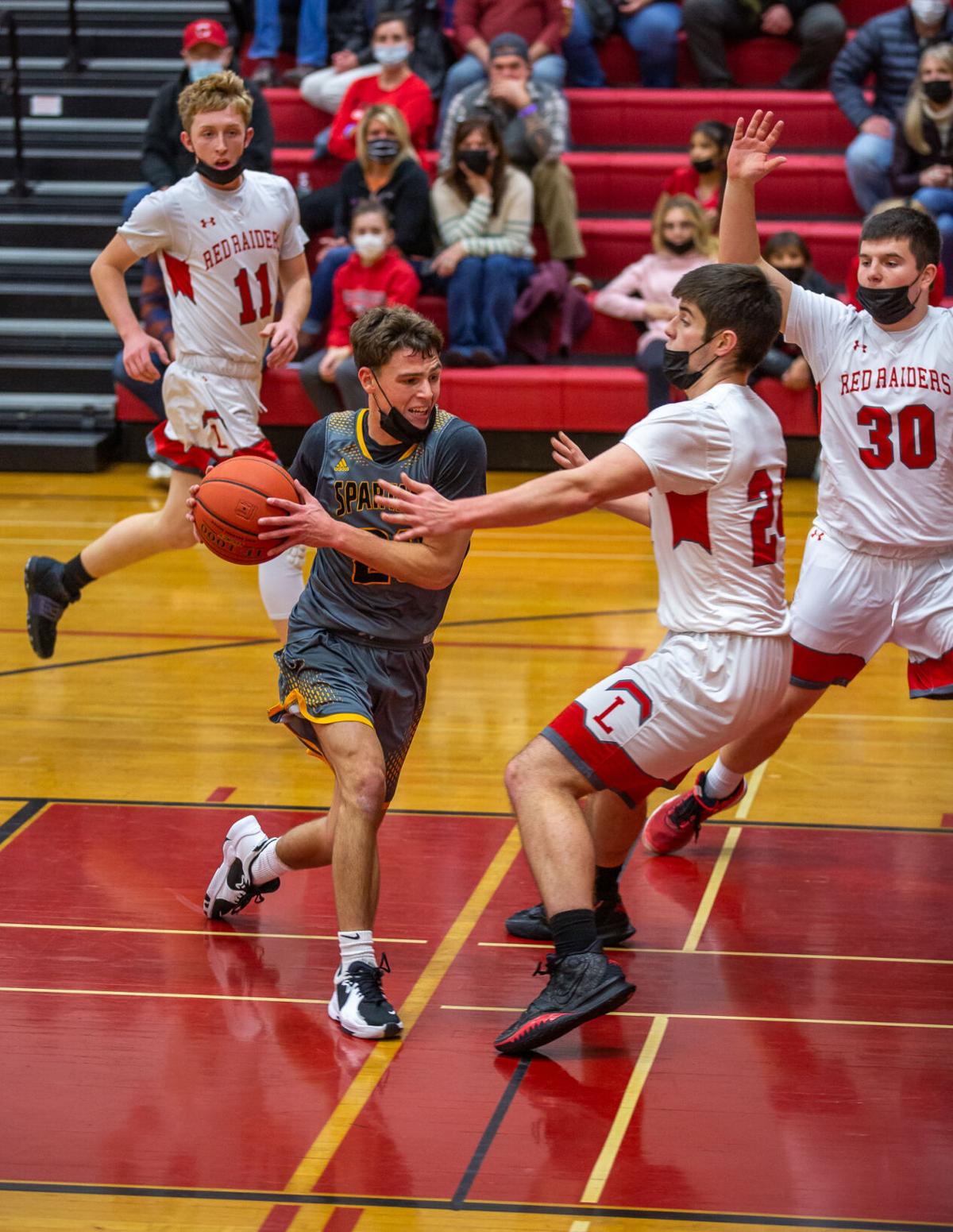 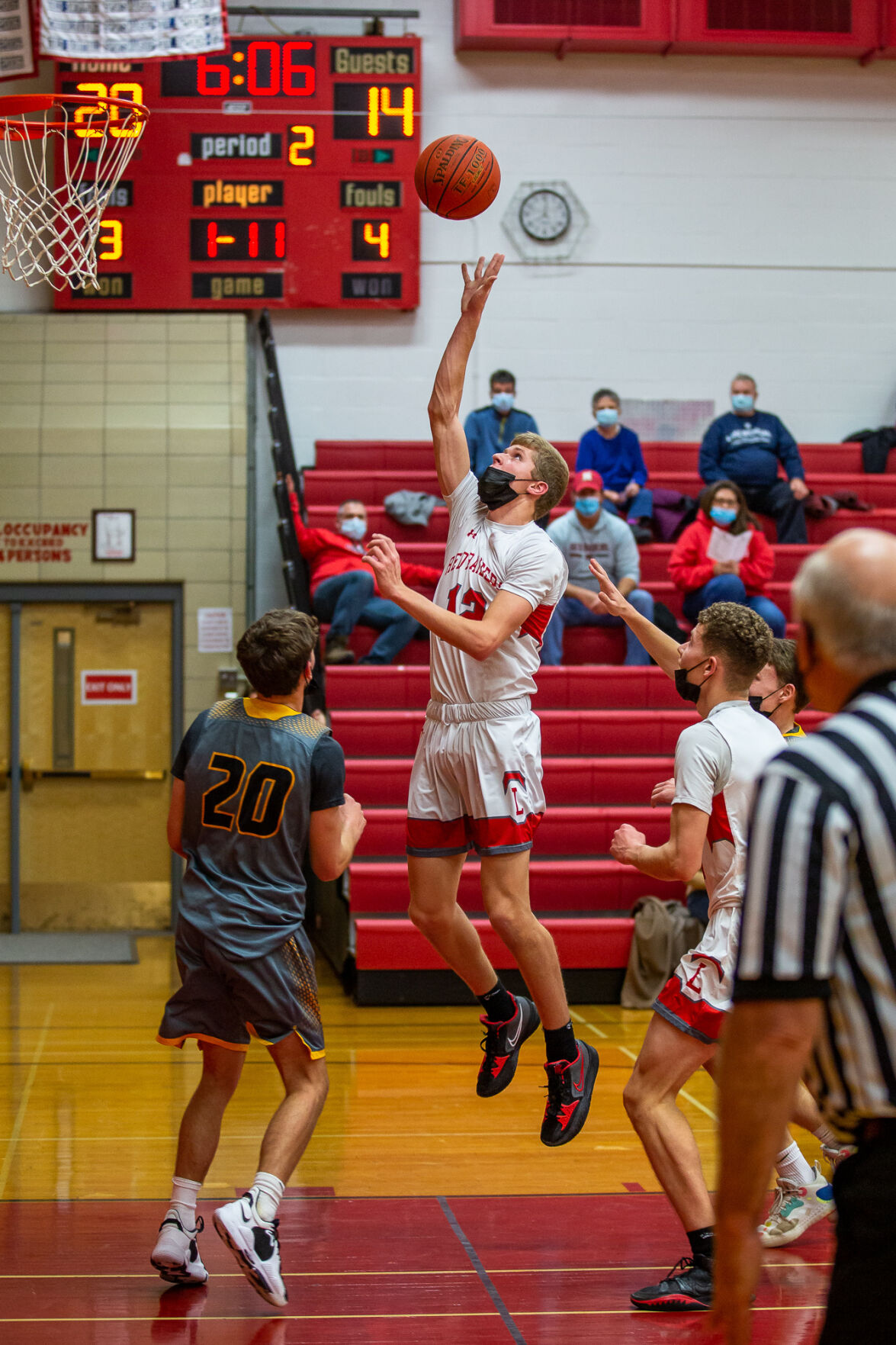 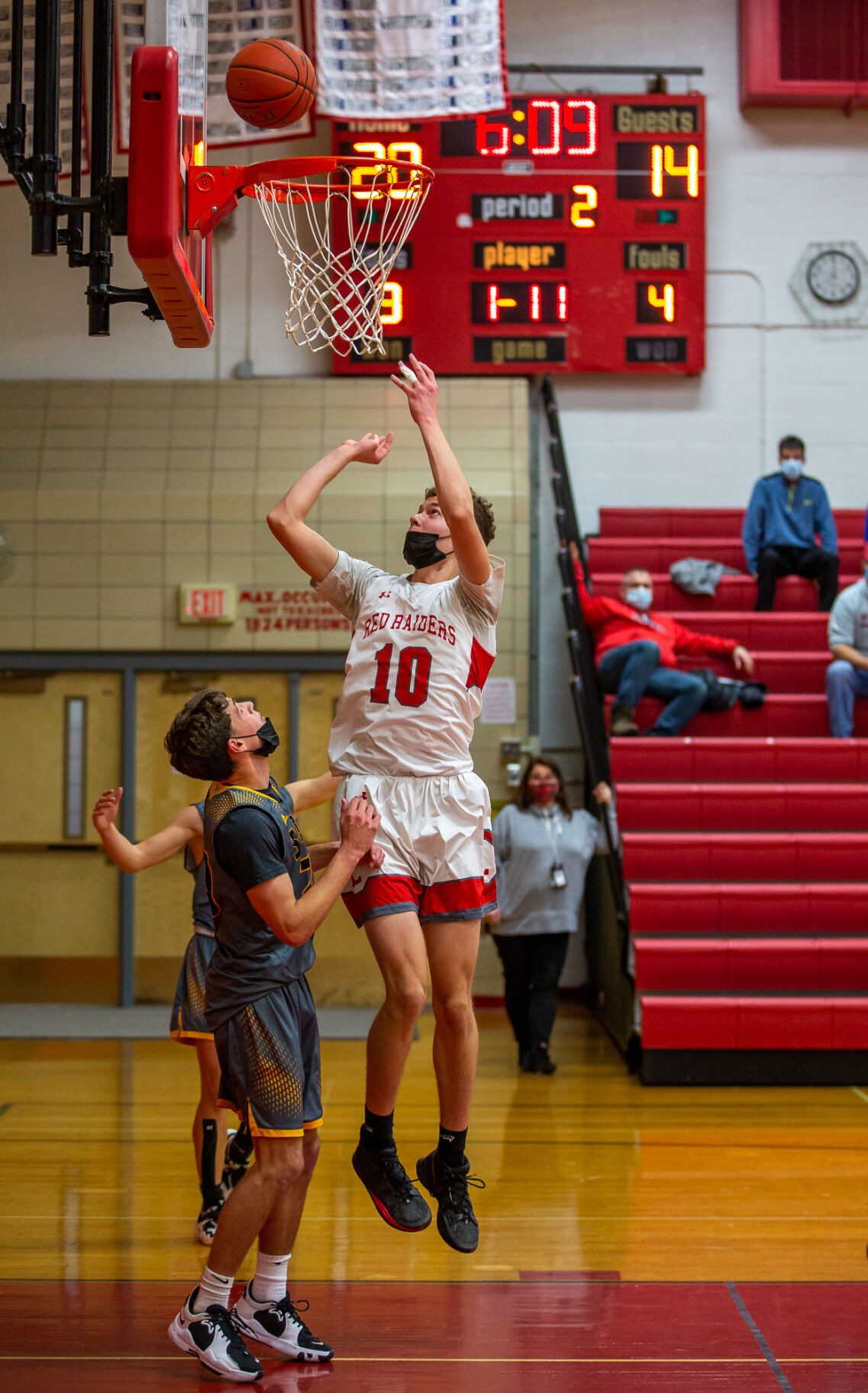 Lowville’s Ryan Young shoots from under the net to score two points in the second quarter. Kara Dry/Watertown Daily Times 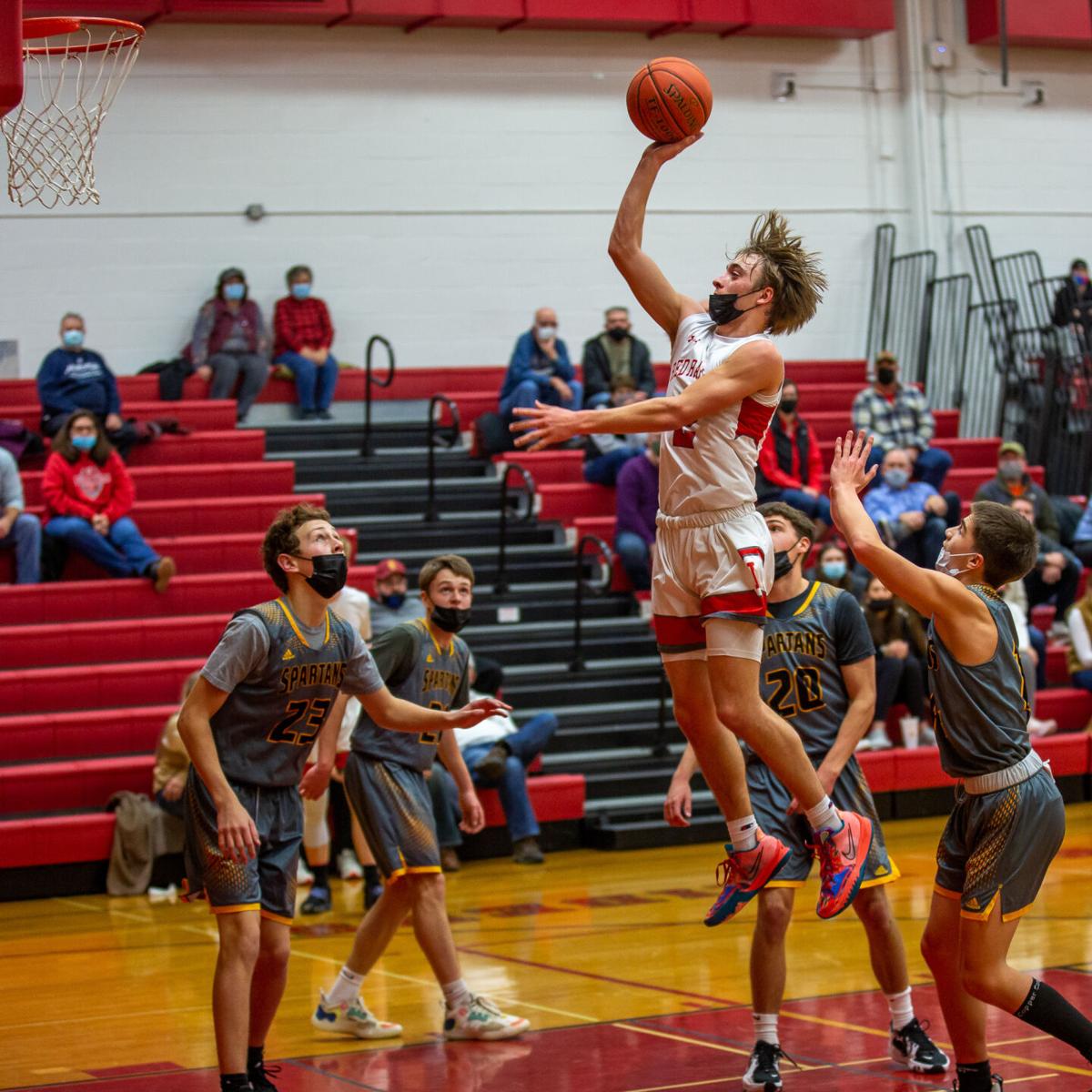 Lowville’s Ryan Young shoots from under the net to score two points in the second quarter. Kara Dry/Watertown Daily Times

LOWVILLE — Success for Lowville in basketball traditionally begins with applying pressure and Friday night’s game against rival South Jefferson was no exception.

The Red Raiders pressed the opposition from the start to seize an early lead and cruised to a 60-41 victory over the Spartans in a Frontier League “B” Division game.

“It feels good to get a tough win,” Lowville senior Ryan Young said. “It’s a better challenge then what we faced last game and I think we really learned what we need to do to win.”

Lowville (2-0) also extended its winning streak to 30 games dating back to December 2019 — a stretch of wins that led to the program’s latest Section 3 crown.

“It gets us going,” Lowville coach Zach Shambo said of his team’s press. “It gets the kids playing hard, it gets them to play fast and usually leads to some good things for us.”

“The tough thing with Lowville is they really set the pace,” South Jefferson coach Kyle Baker. “We talked the past two practices this about trying not to fall in letting them control the pace and dictate the pace of the game and they did that.”

Spearheaded by its defensive pressure, Lowville scored the game’s first eight points and never looked back by building a 32-21 lead by halftime.

“We put a press on them on defense, so it starts with our press and we fall into our 5-on-5 defense,” Brown said. “I think we got a lot of steals, deflections, movement to tire them out and I think that made us successful in the end when we weren’t as tired.”

“The press really helped us well, pushing them forward,” Young said. “And in the fourth quarter, we just put them away.”

The Red Raiders generated a 14-0 run from the second quarter into the third quarter, including scoring the first five points of the half to lead 38-21.

Later, South Jefferson scored six consecutive points to draw with 13 at 40-27, but Lowville tallied the next five points to lead by 18 and led 47-33 through the third quarter.

The Red Raiders, who led by as many as 23 points, opened the final period with two quick baskets, including a 3-pointer from Young to open the frame.

“They sped us up with their press and they make you work on defense and you’re just constantly playing catchup and chasing them down,” Baker said. “It wears you down, it’s tough to keep up with that.”

After building an 8-0 lead, the Red Raiders led 18-12 through the first quarter. The Spartans closed within 23-21 with four minutes left in the first half, engineering a 7-0 run, but Lowville responded with a 9-0 surge to close out the half.

“We run a simple five-out with a lot of movement, we were all moving, running and pushing the ball with fast breaks,” said Brown, who also grabbed a team-leading seven rebounds and totaled three assists, two blocks and three steals. “We didn’t shoot very well, not like how we would want to, but we got the job done.”

Lowville, which opened its season with a 89-44 win over Immaculate Heart Central on Monday, went 8-0 in an abbreviated spring season in March after schools were cleared to play amid the coronavirus pandemic.

“It’s great to be back,” Shambo said. “Now hopefully we can have a full season and see where it leads us.”

“Our first game was a little weak, but this was one that we had to grind out and be tough with it,” Brown said. “We haven’t seen them that much after what happened with (COVID) last year and we haven’t played much, so it’s nice to get this one,”

The Red Raiders went 22-1 in the 2019-20 season, capped by winning the Section 3 title in Class B before sports were halted because of the pandemic.

South Jefferson won league games against IHC and Indian River to begin its season this year.

“We were 3-0 coming into this, we had a nice win against a really good Oswego team,” Baker said. “ ... I think we have a good team, I think we’re going to continue to improve, it’s early in the season. A good thing about a game like this is you find out what you really need to work on and make those adjustments going forward.”