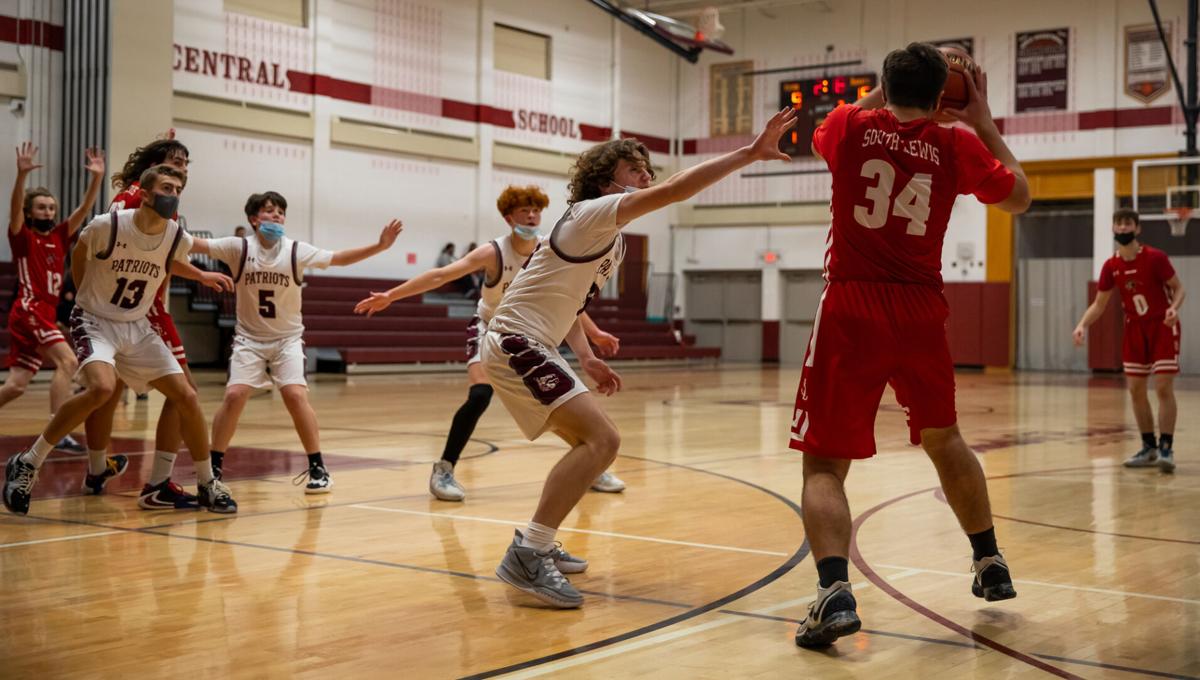 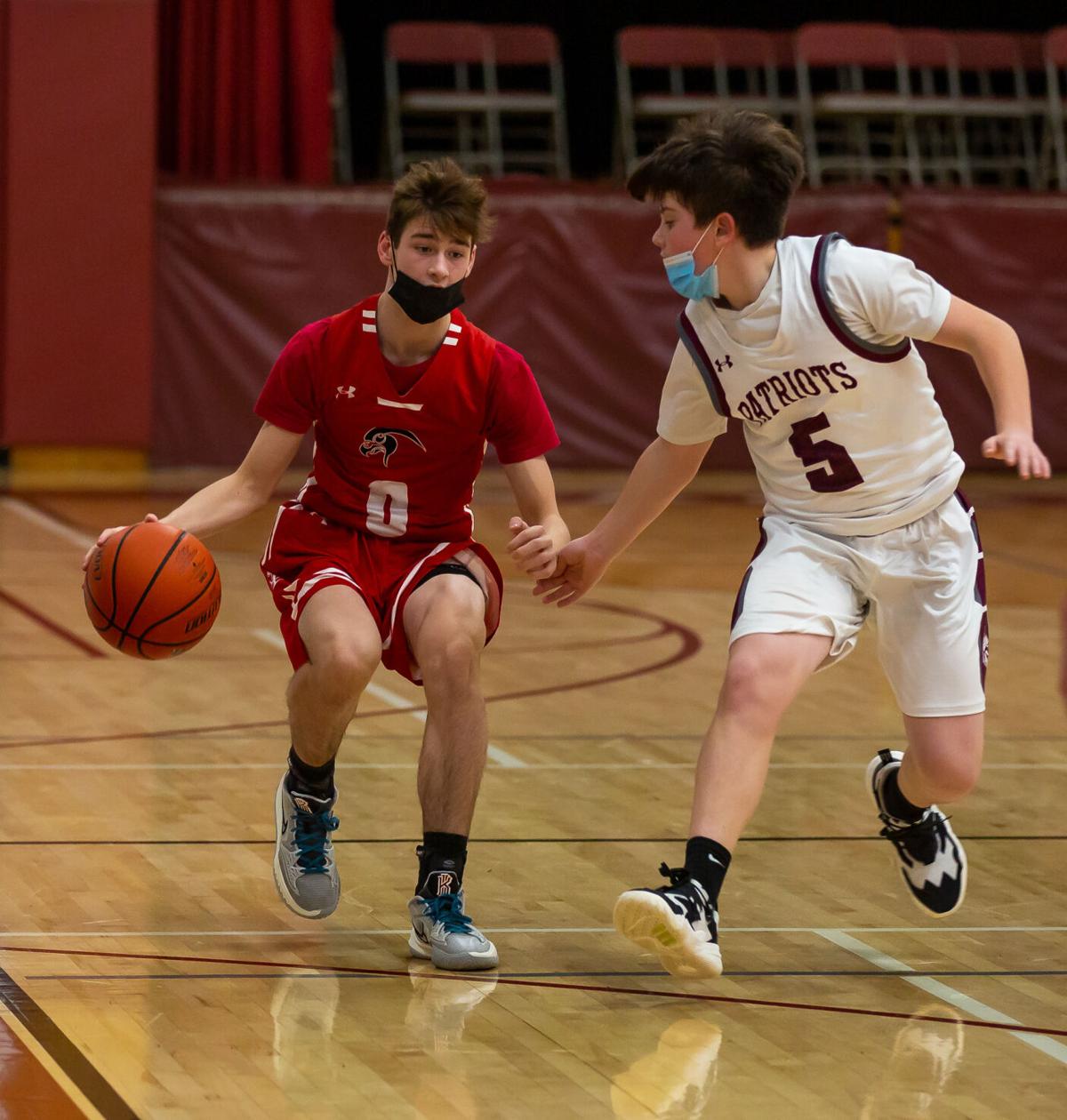 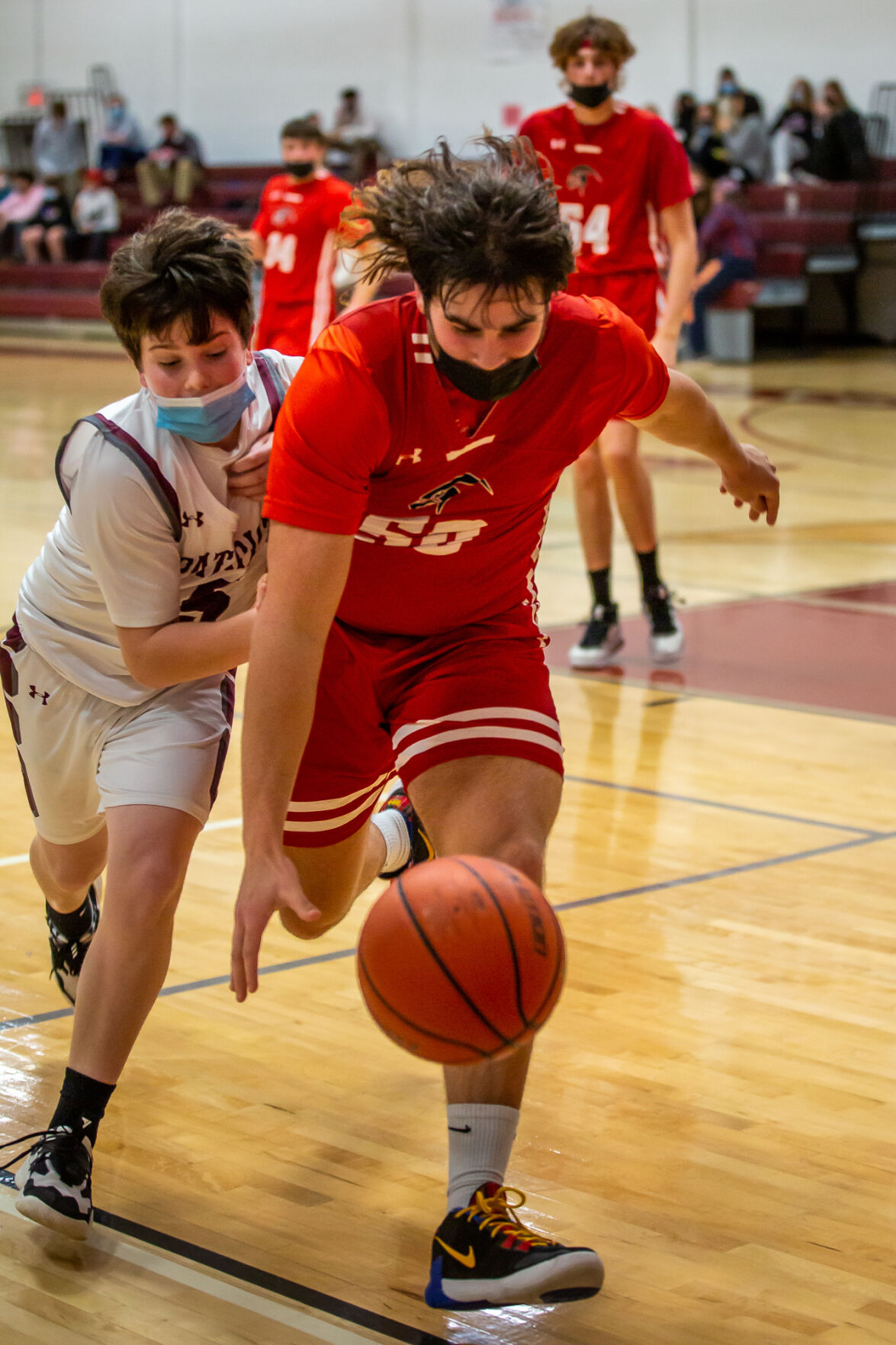 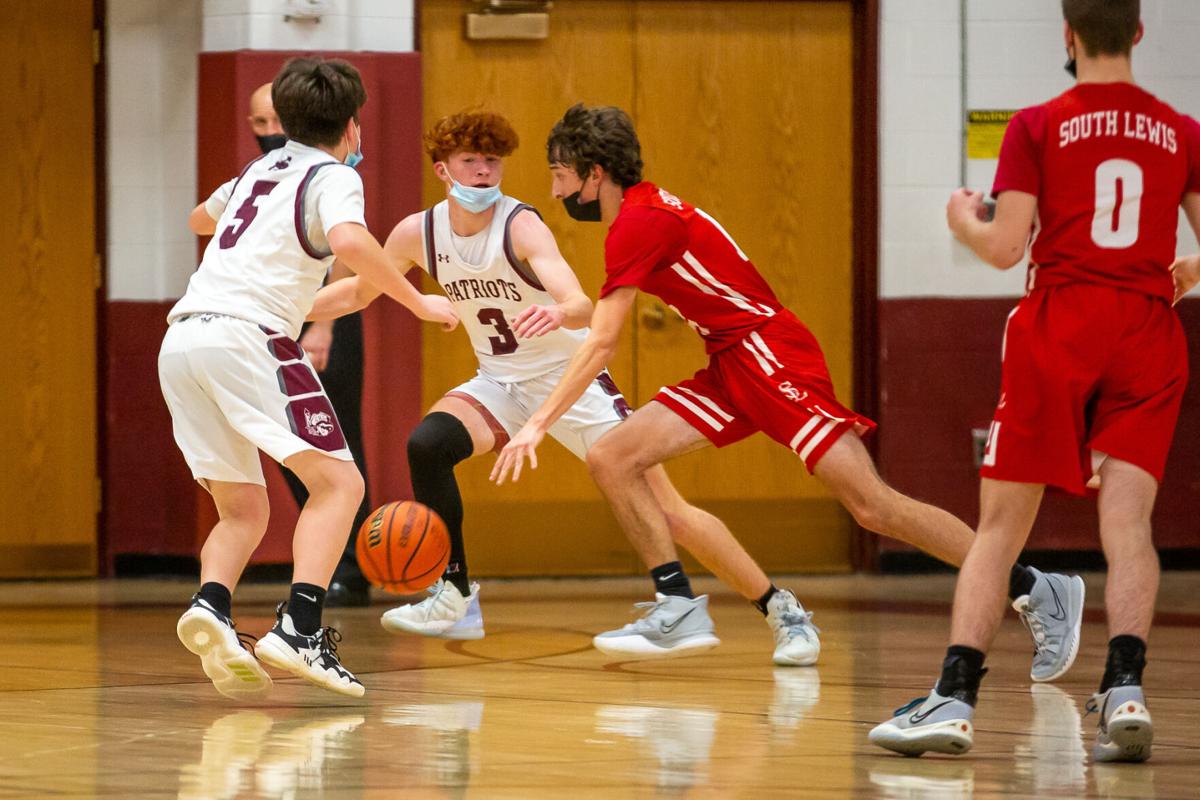 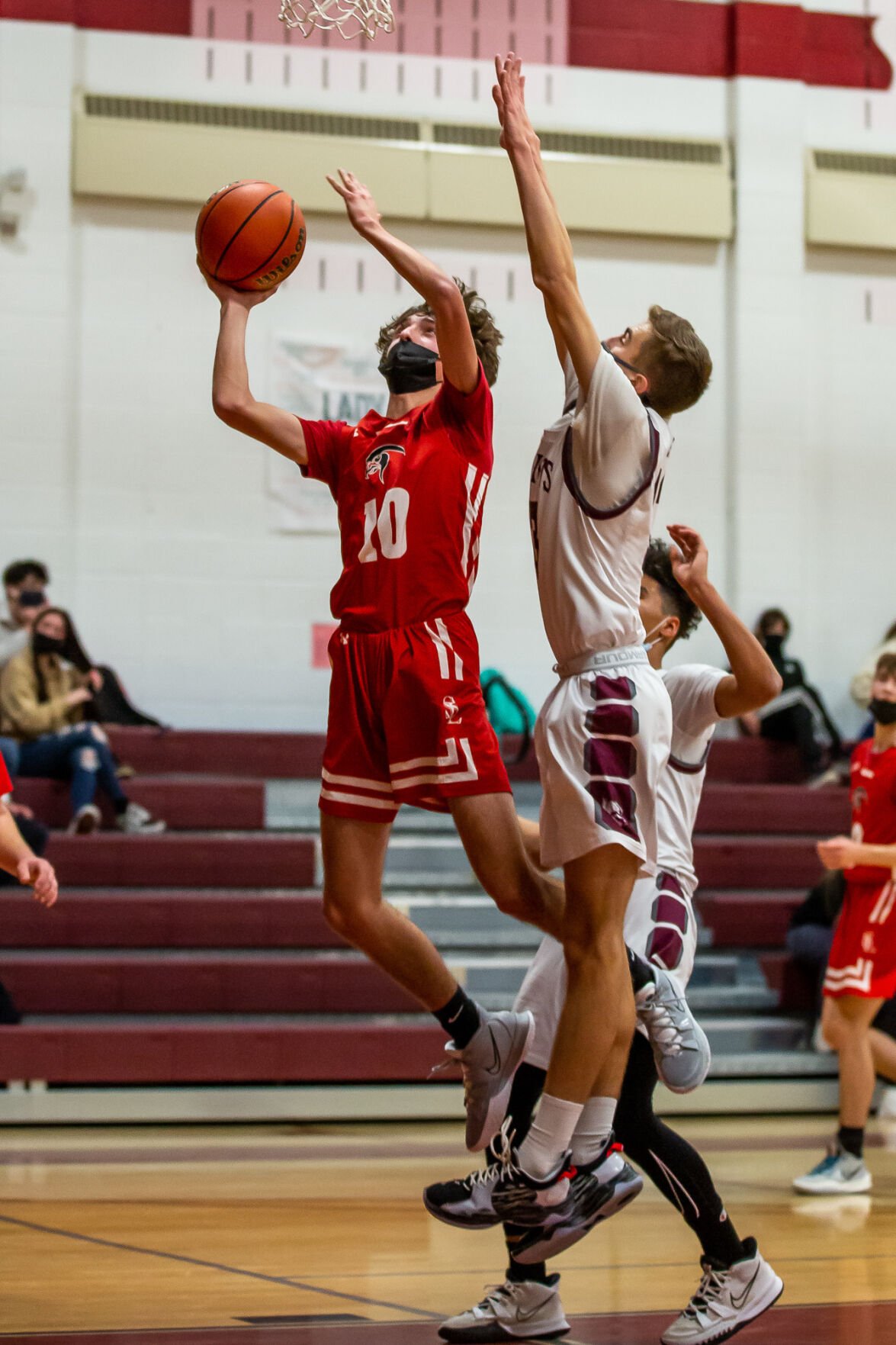 SACKETS HARBOR — Tyler Green and his Sackets Harbor teammates continue to play their best basketball in the second half of games lately.

The Patriots found their groove after halftime again Wednesday night, facing the South Lewis Falcons in a meeting of Frontier League division leaders.

Green, a senior, scored 11 of his 17 points after halftime as the Patriots outlasted the Falcons, 46-41, in a division crossover game at Sackets Harbor.

Sophomore Austin Griner, the second contributor in Sackets Harbor’s 1-2 punch, tallied nine of his 11 points in the second half to help pace the way.

The “D” Division-leading Patriots improved to 9-0 on the season, including 7-0 in the league.

“It was a hard-fought game and we did the best we could,” Green said. “Our energy wasn’t there in the first half, but we have a lot of new guys and they showed their toughness in the second half.”

“They’re a good team, we knew it was going to be tough,” Sackets Harbor coach Jeff Robbins said of South Lewis. “Obviously their two inside players are really good, really big, aggressive, physical. We don’t have a lot of size, so when you’re young, we didn’t come out with the type of energy and confidence that we need to be successful.”

The Patriots, who trailed 17-13 at halftime, orchestrated a 13-3 run midway through the quarter to take a 26-20 advantage with 4:30 left in the period, sparked by three consecutive 3-pointers, including a deep basket from Griner and an even deeper shot from Green.

“In the second half we just came back and we fought, they’re a tough team, but we wanted it more in my opinion,” Green said. “Those guys dug in and worked hard and that’s how we win games.”

“It was a tough one, but they’re a good team,” Griner said of South Lewis. “But we gave it our all, we fought hard and I thought we did everything we could to get the win.”

But the Falcons stormed back with an 11-2 surge of their own to reclaim the lead and held a 31-28 advantage entering the fourth quarter.

“But part of that, in their (defensive) scheme, they kind of mixed us up a little bit,” Robbins said. “But we’re going to see a lot of those, so we just got to be ready and I thought in the second half we just played basketball, we played off our energy, we played off our defense a little bit more. The guys, credit to them, they made some plays at the end.”

Sackets Harbor responded by scoring the first eight points of the final period to take a 36-31 lead.

“In the second half, we were a lot more energetic,” Green said. “We started shooting the ball a lot better and we really trust each other. That’s the biggest thing with this team is trust, every guy on that court we can put our full faith in.”

South Lewis would draw within a point on three more occasions, but freshman Jake Peters drained a 3-pointer and Griner later hit a 3 that provided Sackets Harbor with a 44-40 lead with 1:04 to play.

“I felt good about it, I know my teammates have confidence in me to hit those shots,” Griner said.

Sackets Harbor, which is ranked No. 14 in the state in Class D, is coming off a pair of comeback wins against Hermon-DeKalb and Gouverneur as the Patriots won their Charlie Bridge Holiday Tournament last Wednesday in Sackets Harbor.

“He’s done this the last two games, against Gouverneur he had zero at the half and today I think he had two at the half,” Robbins said of Griner. “I talked to him both games at halftime and said ‘just forget that first half, we need you in the second half’ and he had big second halfs in both games.”

Green and Griner each totaled four rebounds, three assists and two steals for the Patriots while freshman Marcus Castine led the team in rebounding with eight.

“Well hopefully we can build on this, they’re a good team, they’re undefeated,” South Lewis coach Ted McCall said of Sackets Harbor. “They’re well coached, they always play hard in their own gym, they make shots. I could make excuses and our big guys, they did what they could. We had some guys step up and make some shots that they haven’t been making all year, so hopefully we can move on and be a stronger team by moving forward.”

Both Sackets Harbor and South Lewis are in quest of their first division titles since the 2016-17 season.

“We do a great job and we’re committed to this team,” said Green, one of four seniors on Sackets Harbor this season, with only two of them in the starting lineup. “It’s a great group of young guys and we’re going to go places, it’s great to see, and we’re working hard.”

“It’s always good coming in and playing good teams, especially on the road,” McCall added. “Hopefully for the long run and into sectional play, that this will help us. We’re disappointed, but there’s a lot of positives to take out of it.”