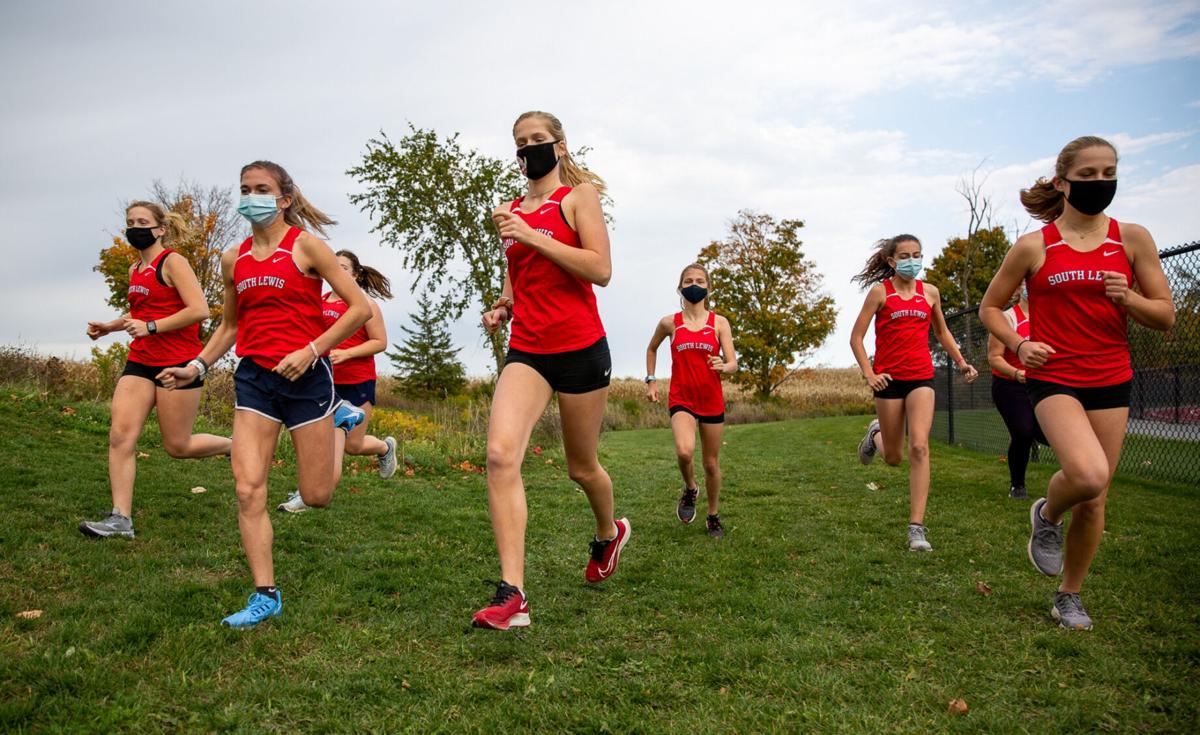 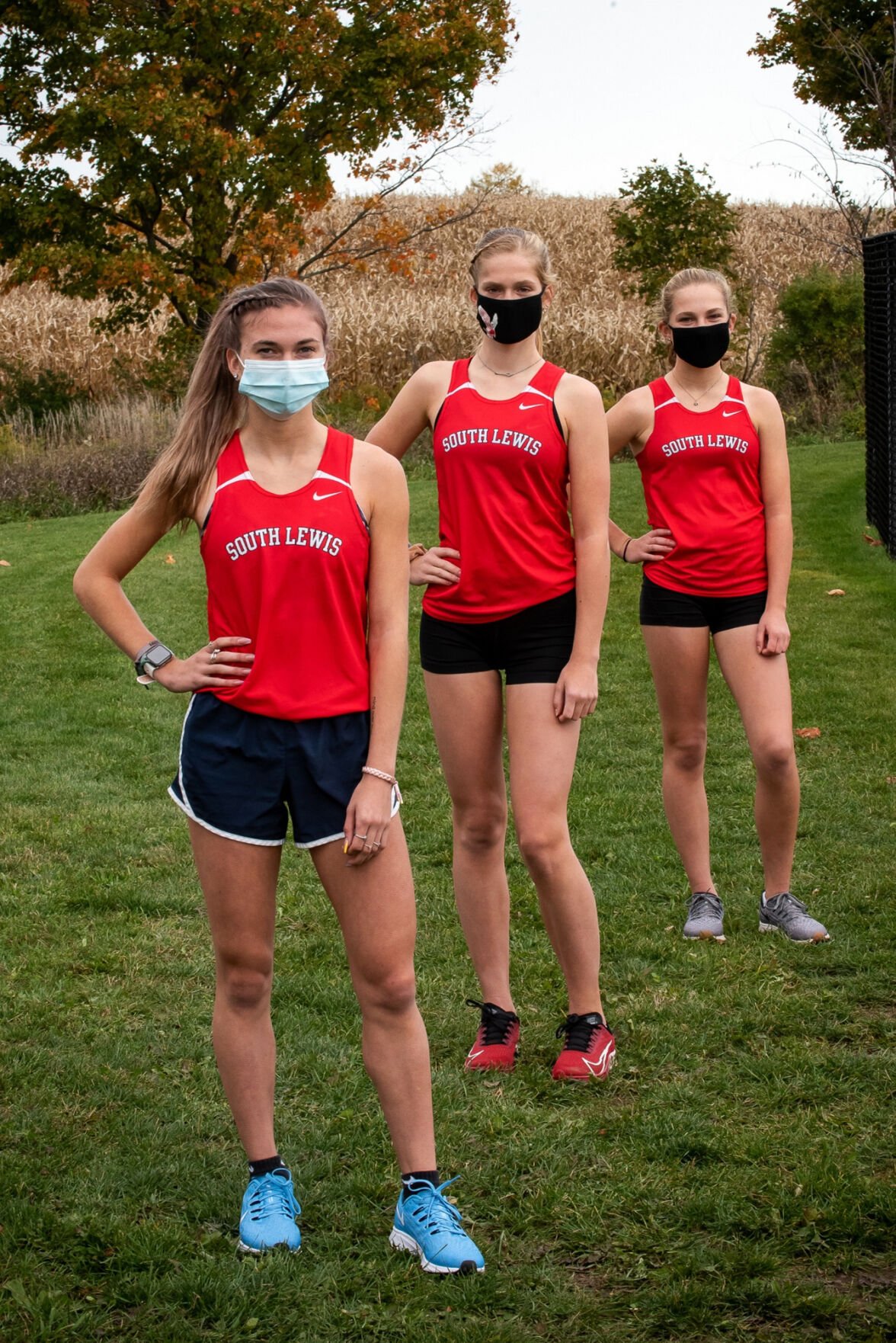 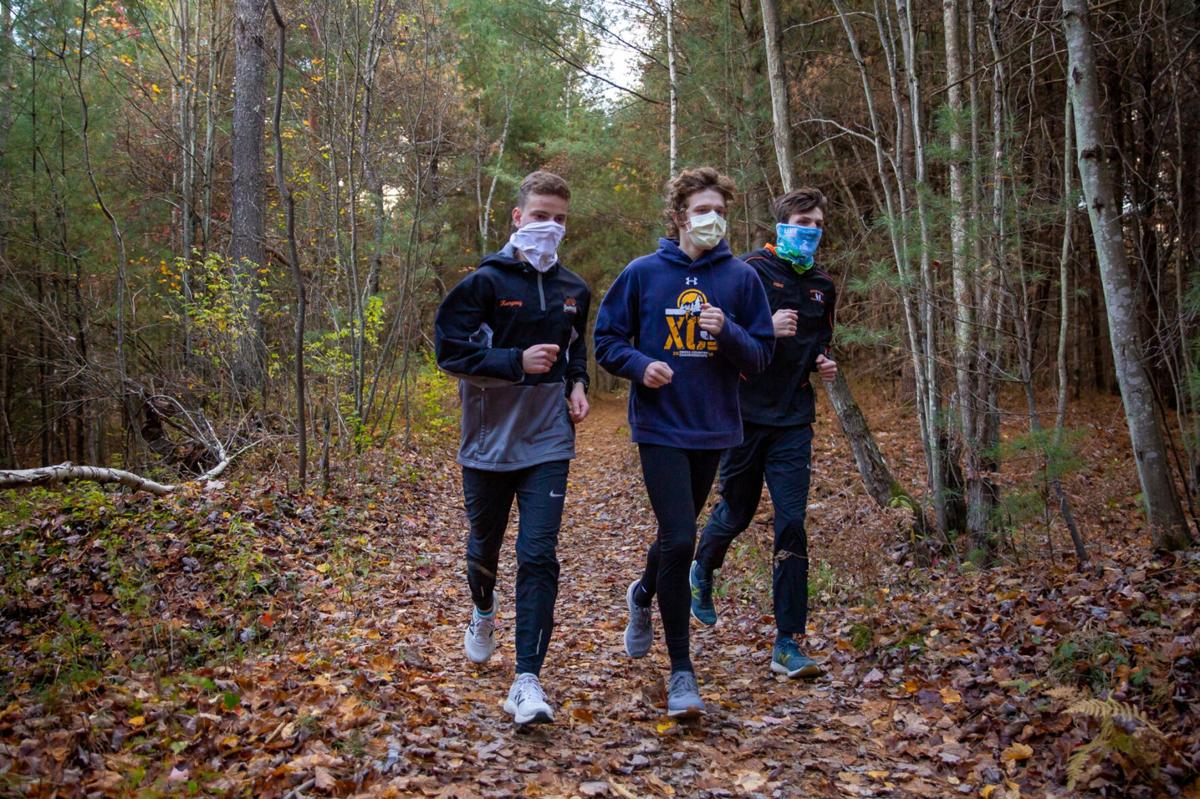 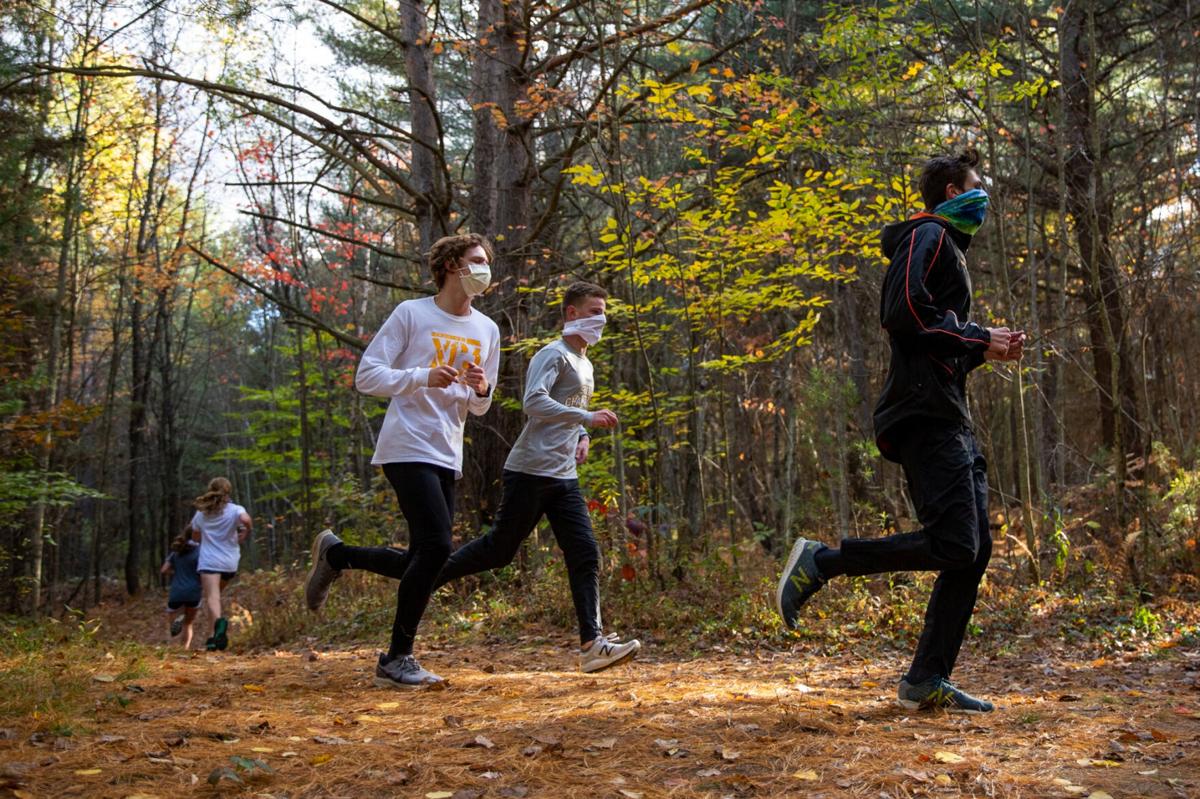 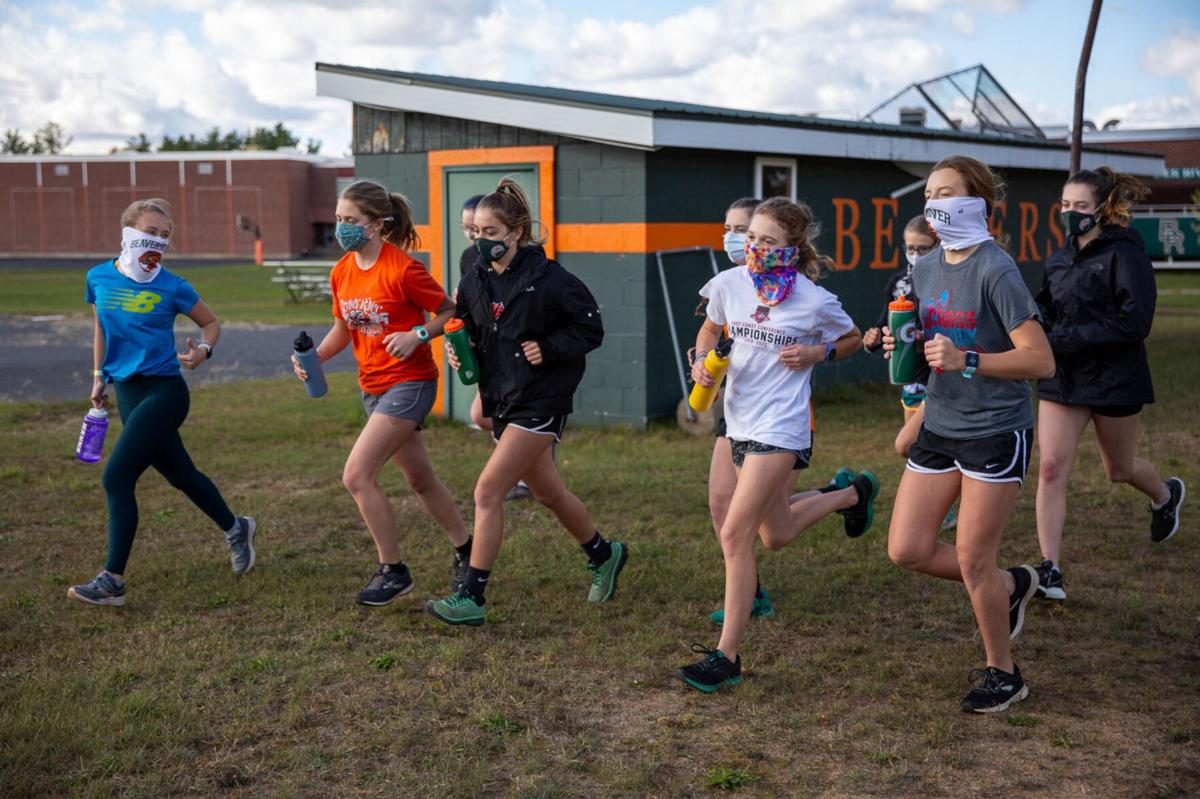 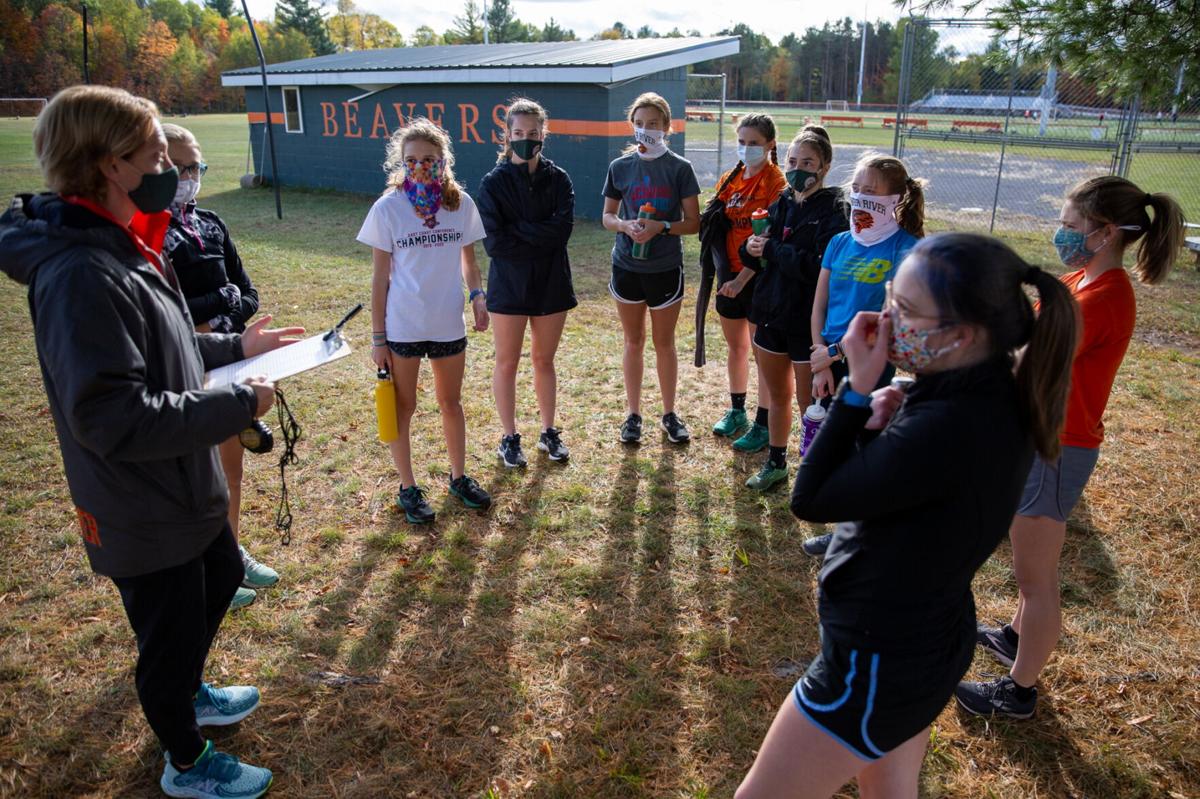 The girls cross country team huddles before taking off to the trails for a speed practice last week at Beaver River Central School in Beaver Falls. Kara Dry/Watertown Daily Times

The girls cross country team huddles before taking off to the trails for a speed practice last week at Beaver River Central School in Beaver Falls. Kara Dry/Watertown Daily Times

It was mid-September when South Lewis’ Hannah Ielfield stood on the track at Thomas Edison Park in Edison, N.J., awaiting the start of her third race of the season. Instead of her red South Lewis pinny, she sported a neon orange one, complementing the orange in her Nike running shoes.

Ielfield was participating in the Garden State Track Club High School Fall Showcase Meet as an “unattached” runner. She finished the 5,000-meter run with a time of 17:57.74, a personal record and good for ninth place out of 21 runners in her heat.

Her South Lewis season will begin this week, but it will be significantly limited, coach Jack Bernard expects to only run maybe two or three meets.

Ielfield, a senior, has college running aspirations, so she needs new times to show recruiters, hence September’s independent meet in New Jersey. Her two others have both been in Florida over the course of the last month and a half.

Ielfield’s not alone, the Beaver River boys team traveled to Boston as a club team for an invitational — one of its top seniors Cory Demo also ran in New Jersey this past weekend.

While the Beaver River boys and the South Lewis girls don’t typically see much intense competition during the regular season, particularly in the Frontier League, they flex their leg muscles when it counts the most, the state championships.

But those were nixed long ago as COVID-19 has affected almost every inch of New York state high school athletics. It stings for both elite squads. The Beavers were positioned to win their fourth straight team title, while the Falcons, with a top three of Brynn Bernard, Lexi Bernard and Ielfield, felt this season was their best shot.

“This was supposed to be our big year,” Lexi Bernard said. “We were supposed to go for our state title again as a team. It’s definitely just weird that it happened this year.”

The reality is, the 2020 season will be unlike what the two schools have ever experienced. The first dual meet between the only two participating FL schools (Copenhagen and Lowville don’t field teams) will be Tuesday at Beaver River. Though the stakes are low, the student-athletes, who have been starved of interscholastic competition for the past seven months, welcome the chance to don their colors and face a rival school.

“I’ve been looking forward to this, because it’s the first race,” Brynn Bernard said. “I just want to get out there and run as fast as I can and hope for a good time.”

The two schools will have a rematch the following week, this time in South Lewis. After that? Well, it’s still unclear.

It’s an unfortunate reality, but Beaver River’s Colton Kempney isn’t looking at it as a lost year.

Kempney noted that just because the Beavers may not be competing as much, it doesn’t mean they won’t be working out. The junior is one of the top runners in the region and the country, placing 37th out of 203 participants in last year’s Nike NXN National Championships in Portland, Ore.

His college recruitment is still in the early stages; he’s texted coaches and has continued to work on his fitness, and he believes that right now he’s in the best shape of his life.

Demo is a senior and like Ielfield he hasn’t been able to do any college visits, but has kept in touch with college coaches through calls and texts.

He’s trying to provide new times for recruiters by going to independent meets.

“I think that all the coaches know that everyone is in the same boat,” Demo said on whether he feels the lack of competition will hurt his college chances.

To have more opportunities to run as a team, Beaver River coach Alex Barrett started a USA Track and Field club. They’ve already had one race in Boston.

“I would give that mixed reviews,” Barrett said. “It was a very safe situation where only your team was competing at any given time. Everybody had a one-hour block, a time to go run the course and get timed. So you weren’t ever going head to head.”

They’ll try for more virtual meets through Nike, giving the boys more times to add to their resumes. But a virtual race will never fully mimic that of an in-person meet.

“The kids, they do a time trial and we submit the times,” Barrett said. “Those kids that want college coaches to see their times and see what they’re doing can get some data, but it’s not the same. Head-on-head racing is faster, so we’re eager to race South Lewis, though the team competition may not be dramatic, they have some good runners and it will be nice just to have some different people to run against.”

In a season, the South Lewis girls team would be competing in an invitational every weekend. Now many of the runners are focused on running in opens.

“The way that it’s going this year is that there are many open races where the kids can go run the open races and get the good competition,” Jack Bernard said. “Because that’s what the really good kids are doing, they’re going to the open races or they’re getting invited to New Jersey and other track meets. It’s a combination of high class track meets and cross country meets, but you have to have the money to travel. We’ve already been to two of them, so we’ll continue to do them and travel and get the competition so they can get to the level that they need to be.”

When running at states, the girls in South Lewis and the boys in Beaver River generally have an idea of who their competition is. Like them, those runners are some of the state’s best.