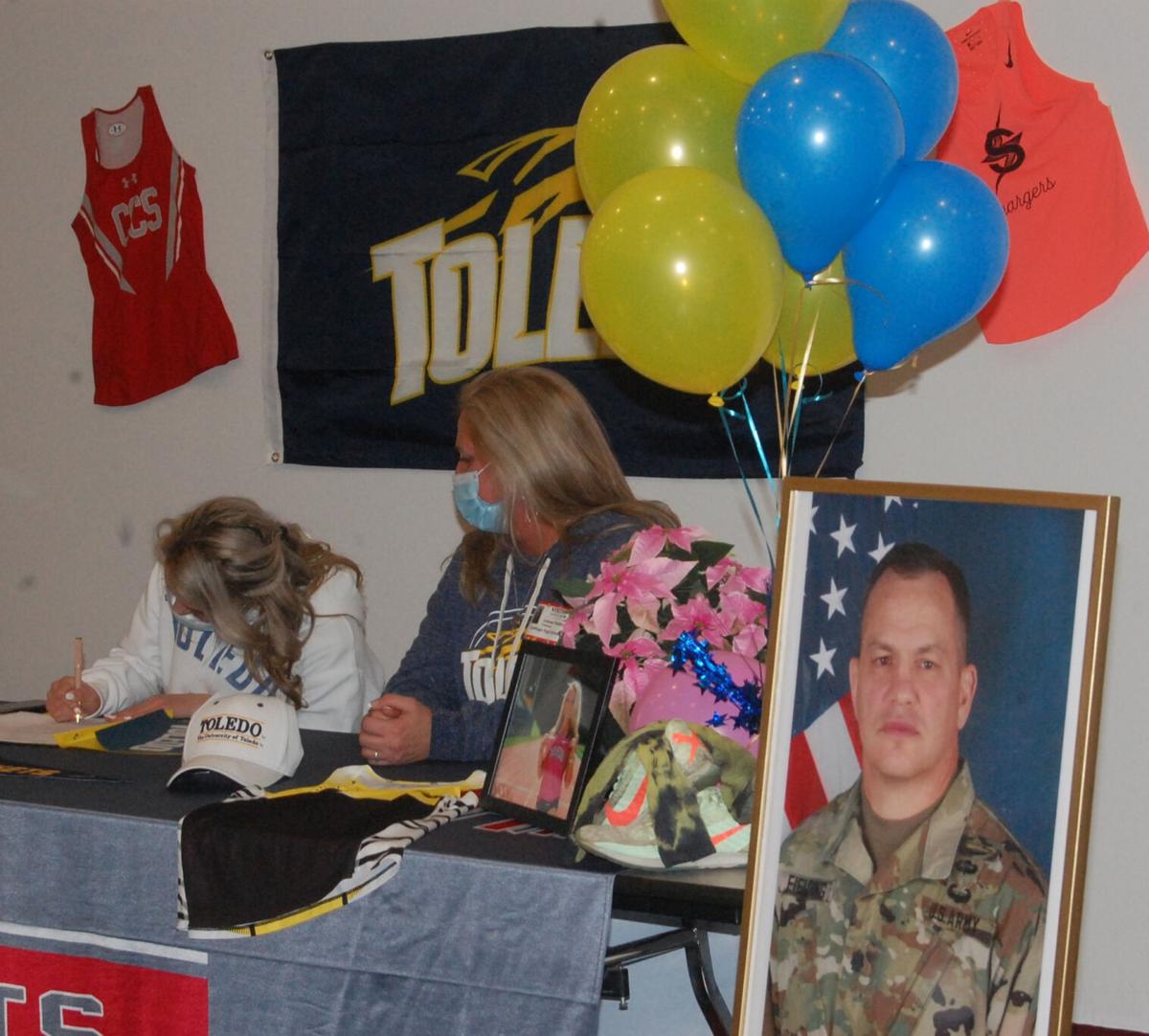 Carthage’s McKinley Fielding signs her letter of intent to run for the University of Toledo as her mother Jolene watches and next to a photo of her late father Lt. Col. Benjamin Fielding. Elaine M. Avallone/ Journal-Republican 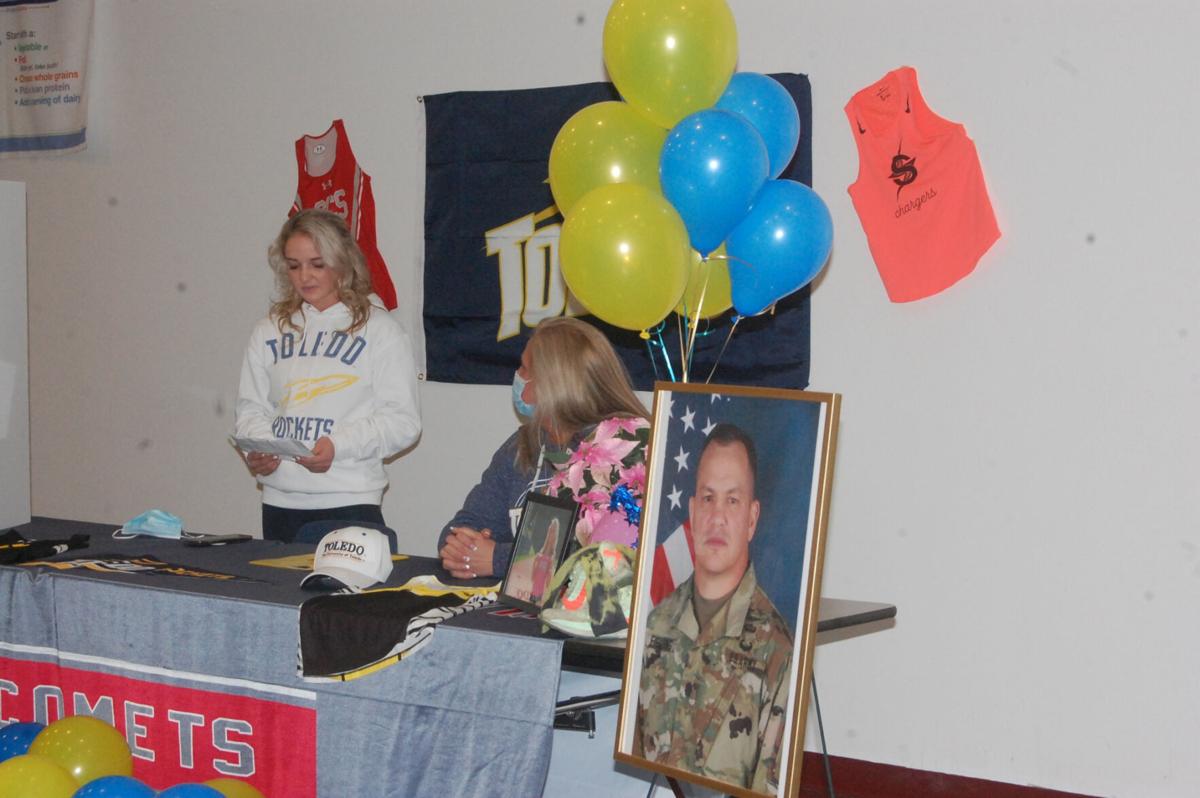 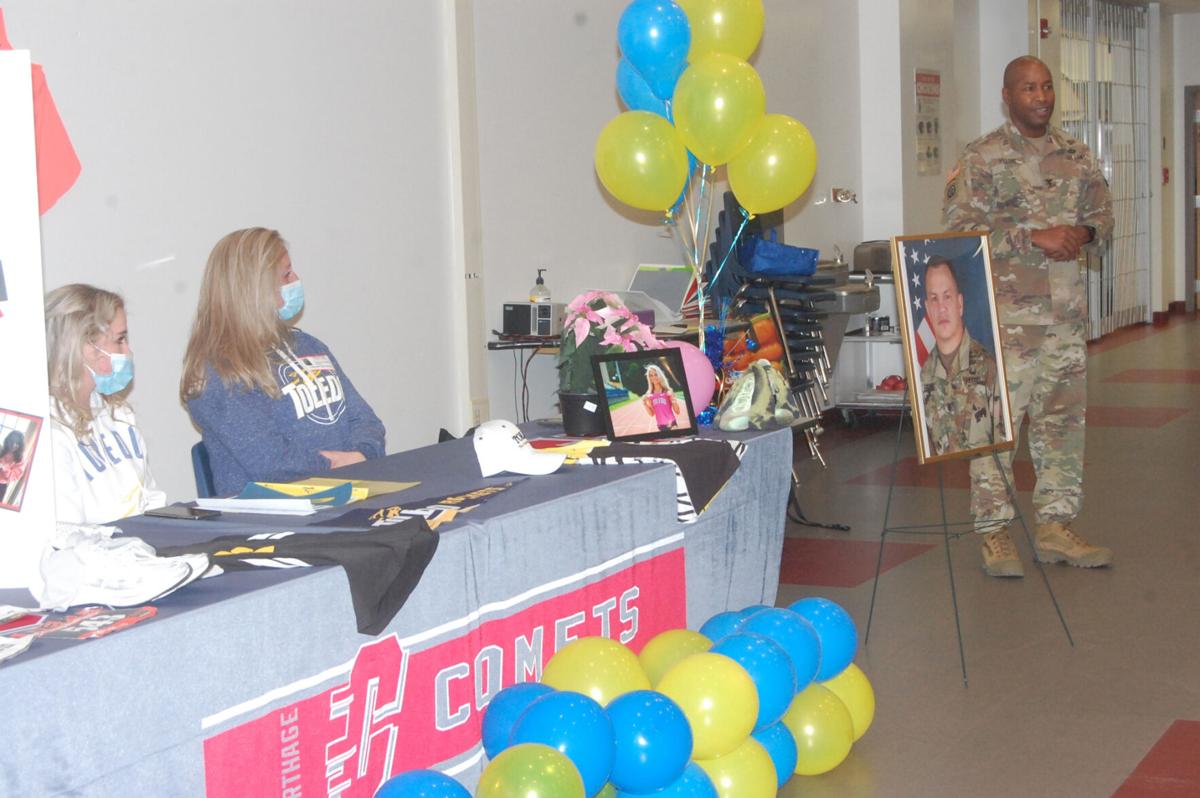 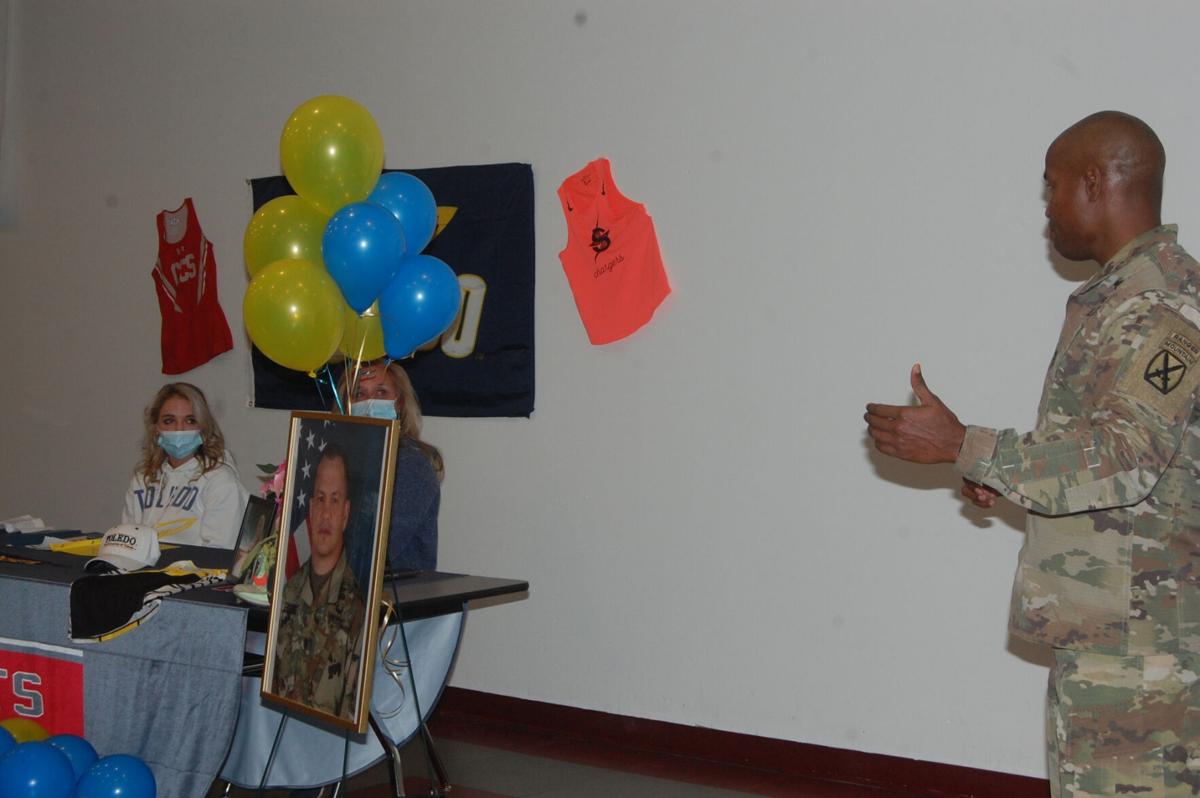 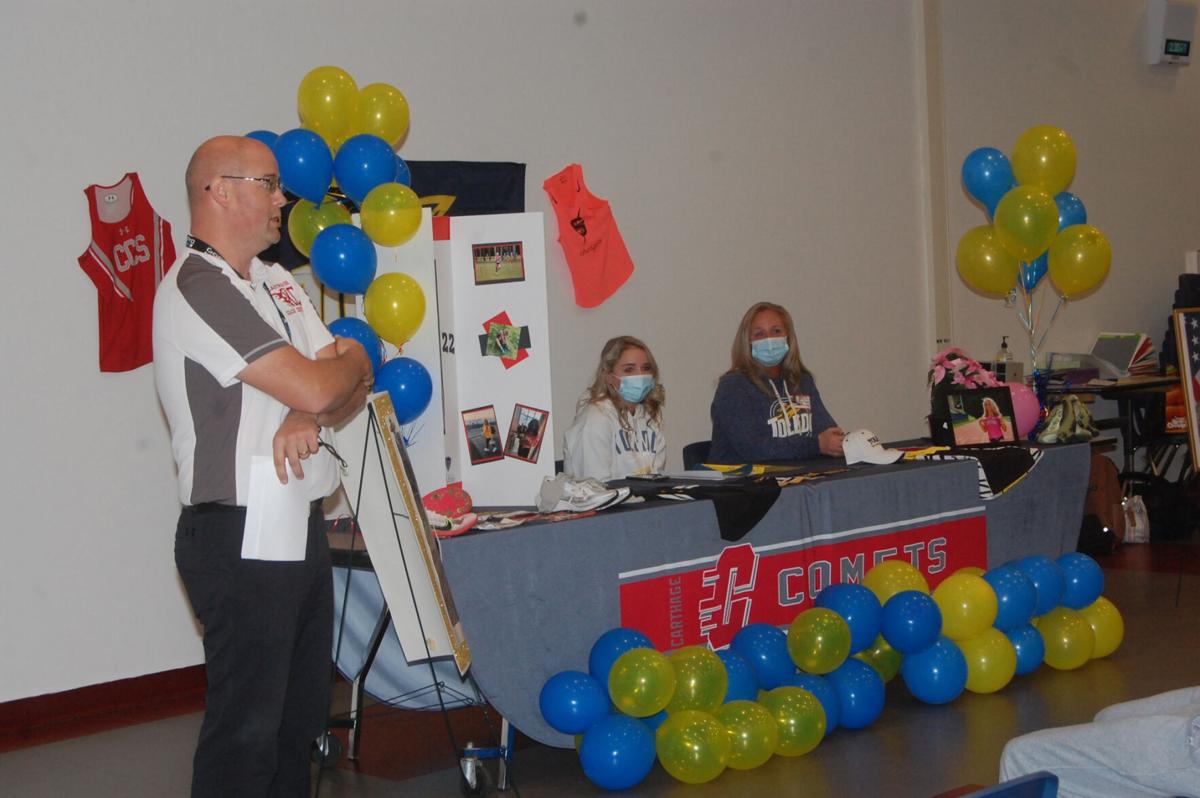 Carthage’s McKinley Fielding signs her letter of intent to run for the University of Toledo as her mother Jolene watches and next to a photo of her late father Lt. Col. Benjamin Fielding. Elaine M. Avallone/ Journal-Republican

CARTHAGE — With family and friends watching and with the presence of her late father, Lt. Colonel Benjamin Fielding, signified by a large portrait, McKinley “Micki” Fielding took the next step in her running career.

Overcoming what could have been a career-ending hip fracture, the Carthage Central High School senior signed a letter of intent at the school Wednesday to run cross country in NCAA Division I for the University of Toledo in Ohio.

In March, the distance runner’s track and field season was delayed while she recovered from surgery in which three screws were inserted to help the break heal.

“My mom took me to (New) Jersey every weekend to race last year when COVID prevented me from having a cross country season and helped me do whatever possible to get back to the level I was at after I broke my hip last March,” Fielding said. “My dad, who I miss more than anything, is the reason I am the athlete I am today and started me running. He was my running buddy and first competition to get faster.”

During cross country season, Fielding captured eighth place in the Class B girls race with a time of 19:14.7 at the NYSPHAA championships Nov. 13 at Chenango Valley State Park.

The Frontier League all-star placed second in the Section 3 Class B meet.

“Her most recent accomplishments are hard to compare to where she would have been without an injury in the spring but amazing based on what they could have been,” said Carthage cross country coach Bryan Zevotek.

Addressing the family, friends and school staff in attendance, the coach said he had the opportunity to work with Fielding only for this season.

“In that short time I have gotten to see the dedication, determination and work ethic that paved the way for the D1 signing with Toledo we are all here for,” he said.

Last year the military dependent returned to the north country after spending the six years prior in Stuttgart, Germany, where she ran against other schools with children of U.S. Army parents. She also spent time in Georgia, at Fort Benning and Savannah.

The coach reflected on Fielding’s surgery.

“Starting cross country was filled with question marks four months ago,” Zevotek said. “Since then I have seen her navigate disappointment and discouragement with the healing process as well as all of the physical and mental hurdles that come with getting back on top. Micki demands much of herself and that’s obvious by her ability to return to the top of her sport in such a short period of time with no signs of slowing that ascent.”

He said he believes Fielding will do well as she continues her running career.

“I wish I had more time to get to work with her in her continued journey,” he said. “Based on the character and hard work I have seen so far I know she’s going to do well at the next level.”

“No goal worth achieving is not worth anything without people to celebrate with,” he said. “You have that here with your family and friends. I know your dad is looking down on us. He was bragging on you all the time.”

Col. Harris spoke of Fielding’s start in running, sharing that while at Fort Drum as a fifth grader, she would sneak onto her mother’s treadmill to run and achieved a six-minute mile.

“It’s ironic that she finished here,” he said. “The time in the middle developed what we have here today.”

Col. Harris said Fielding is special because she has “want-to.”

“Want-to is having the desire to be the best in whatever you do,” he said.

After signing the letter of intent, the future Toledo Rocket thanked those in attendance, her coaches and parents.

Fielding’s mother Jolene Fielding had one word to sum up the achievement, “awesome.”

The runner said what attracted her to the University of Toledo was cross country coach Andrea Grove-McDonough.

“I am so excited for next year and being part of Coach McDonough’s championship team is an honor,” Fielding said in her address.

“She doesn’t look at just one race. She knows running is mental. She values drive over times,” she said after the ceremony.

Fielding said the highlight of her running career was breaking every European distance running record and winning the championship. Stateside, achieving status as one of the top runners in the nation tops her list.

Until she starts at Toledo, the runner plans to return to New Jersey and other races throughout the Northeast as well as in Alabama.

In college Fielding will major in international relations and German, with hopes to one day being a foreign diplomat.