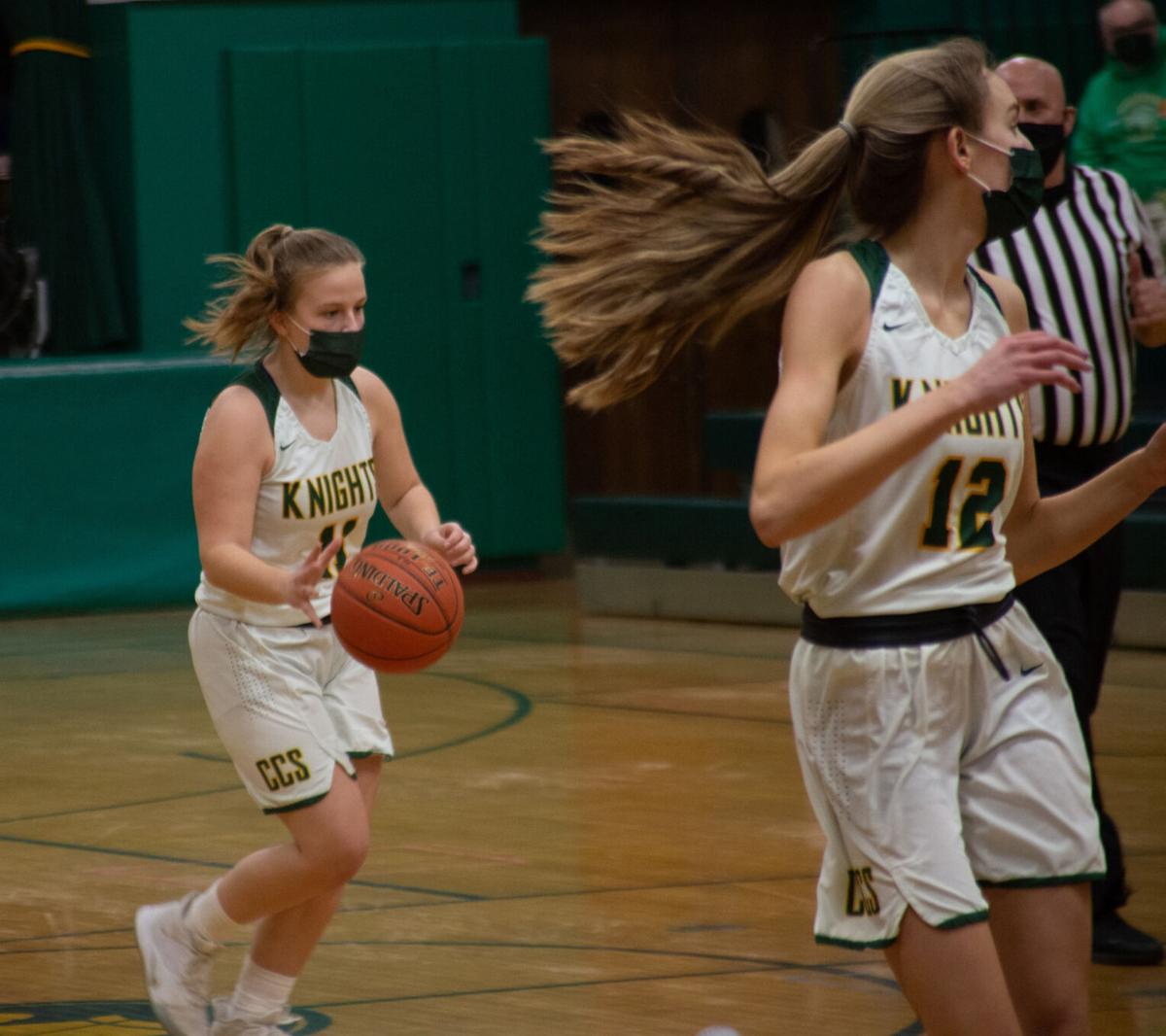 Meghan Fitzpatrick, left, takes the ball up the court in Copenhagen’s first basketball game of the season, an 81-9 home win over South Lewis on Thursday. Philip Sanzo/Watertown Daily Times 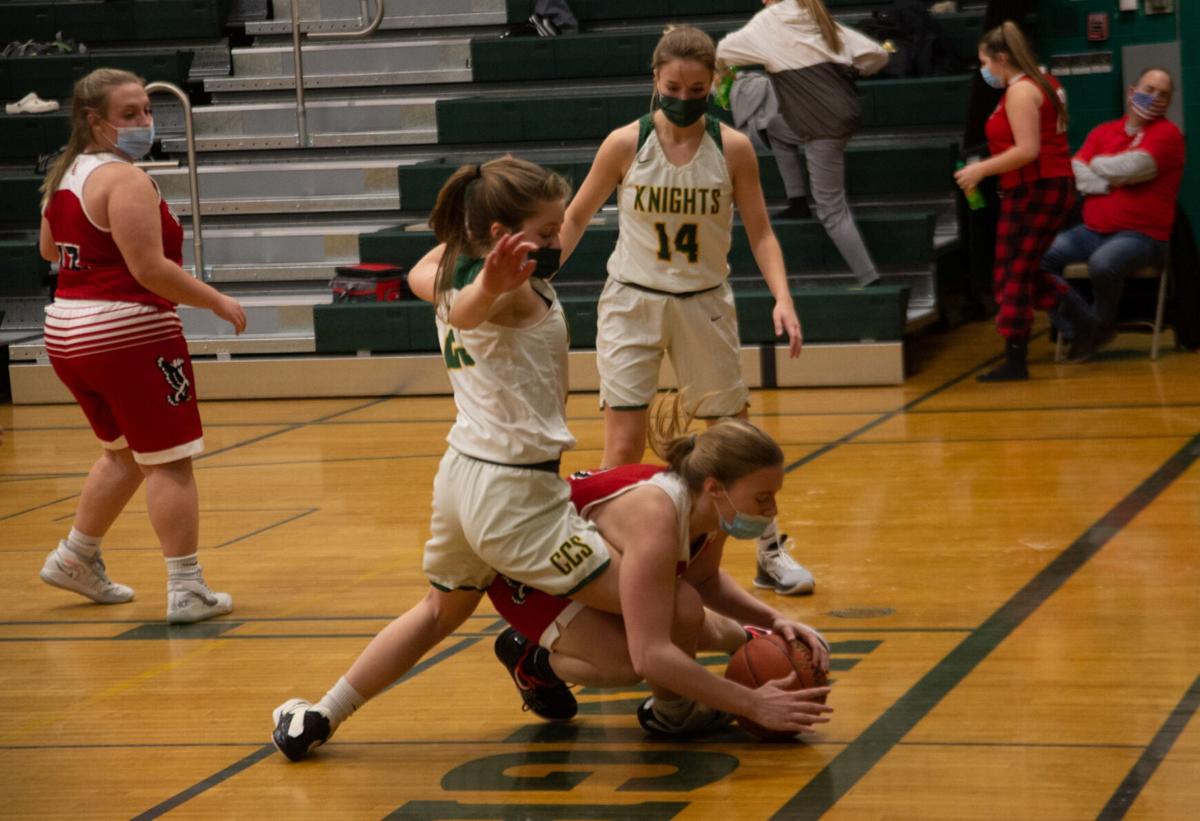 Copenhagen’s Alyssa Fitzpatrick gets caught in a scrum with South Lewis’ Jayden Greene in the opening game of the season Thursday. Philip Sanzo/Watertown Daily Times 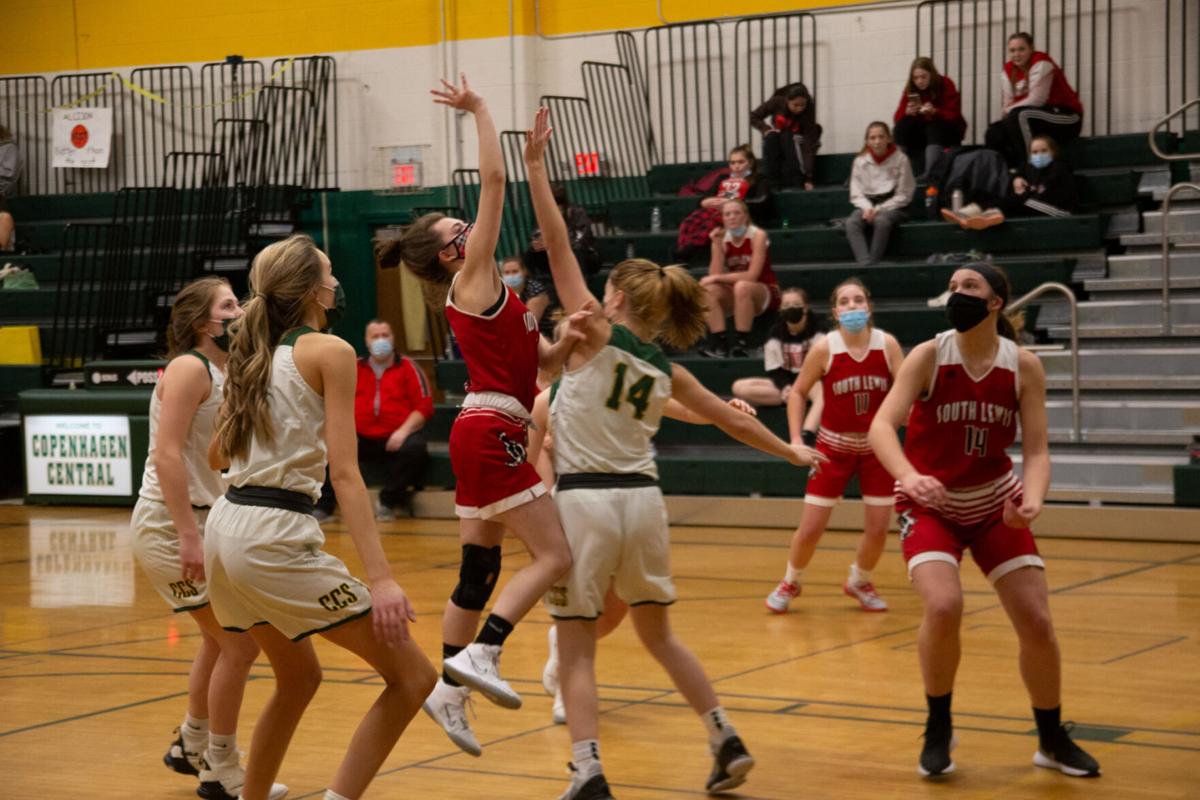 Meghan Fitzpatrick, left, takes the ball up the court in Copenhagen’s first basketball game of the season, an 81-9 home win over South Lewis on Thursday. Philip Sanzo/Watertown Daily Times

Copenhagen’s Alyssa Fitzpatrick gets caught in a scrum with South Lewis’ Jayden Greene in the opening game of the season Thursday. Philip Sanzo/Watertown Daily Times

COPENHAGEN — Brooke Smykla had already begun using her basketball bag for school and Allison Best debated getting a second job — the Copenhagen girls basketball players were preparing for a year without the sport.

So, when Smykla, Best and fellow senior Meaghen Fitzpatrick stood on the court with flowers in hand and parents by their side, the moment felt truly special. Mostly because it was a moment that was far from guaranteed.

After the ceremony, the Golden Knights did what they do best, played elite basketball. The end result was an 81-9 victory over South Lewis — the first game of the season for both teams.

“I was extremely grateful that I was able to have a senior night for basketball, have a season, I didn’t think this was going to happen,” Best said. “I’m glad to have it, I’m a little dismayed that we can’t get out of the Frontier League because I would have liked another shot at that sectional title.”

Every year, coach Natalie Scott announces her seniors on senior night, giving them their moment of grand recognition. But even to her, Thursday’s event was special.

On the court, the Golden Knights didn’t look like a team a year removed from competition. Part of that is team chemistry, the senior core of Smykla, Best and Fitzpatrick has been together for years and has helped lead Copenhagen to multiple Section 3 Class D title games.

“There is a lot of chemistry on this team,” Smykla said. “It’s gonna stink when we have to leave, but there is going to be chemistry coming up to, because we’ve all been together.”

There was also an added level of aggressiveness. Copenhagen’s offensive success typically derives from well executed plays and passes that break down an opposing defense. But in 2021, where the season only lasts eight games, the Golden Knights, especially the seniors, aren’t leaving anything on the table. They’re taking their shots.

Smykla was the best embodiment of that mentality Thursday. She finished with 32 points, the result of 10 two-pointers and four 3-pointers.

Four other Golden Knights finished with 10 or more points.

“I think this year we were more aggressive, I guess you can say, we want to shoot more,” Fitzpatrick, who finished with four points, said. “We kind of worked on that in practice with all of our drills.”

Copenhagen played aggressive and they played fast, often leaving South Lewis a step behind. Marlaina Warcup led the Falcons in scoring with four points, while Brooke Kenyon finished with three points and Olivia Millard had two.

Giving the kids and opportunity to play and have fun is the top priority.

For Scott, Thursday’s game was as normal as life has felt since last February. Even the plain old sound of the official’s whistle put a smile on her face.

Torie Moore tallied 24 points as the Pirates earned a season-opening, nonleague win over the Beavers in Beaver Falls.

The Beavers swept all three relay meets en route to a Frontier League “B” Division win over the Red Raiders in a virtual meet Wednesday.

Isaac Boliver also added victories in the 100-yard butterfly and 200 individual medley for the Beaver River (1-1).

Sean Miller took the 100 freestyle and Colin Kempney won the 200 freestyle for Lowville (0-2).