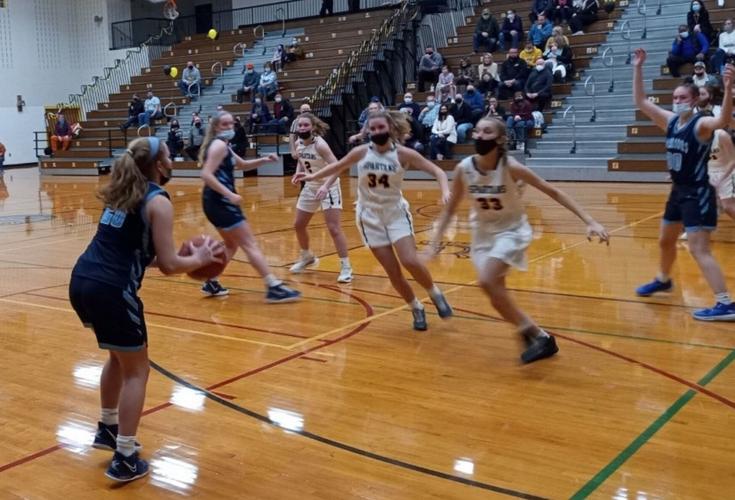 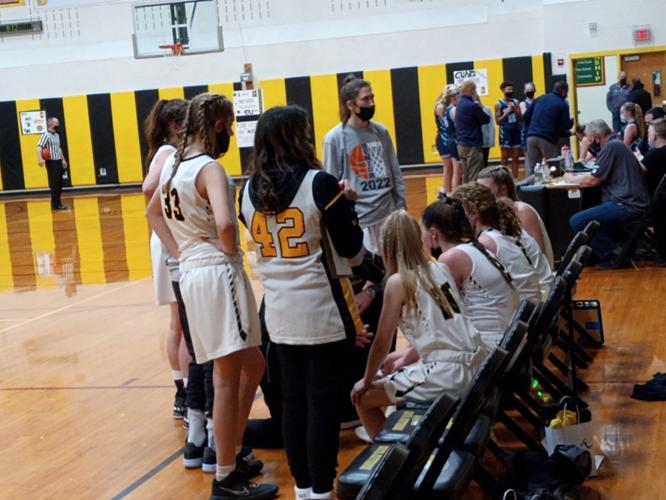 The South Jefferson and Indian River teams meet during a time out in the second half. Dan Mount/Watertown Daily Times 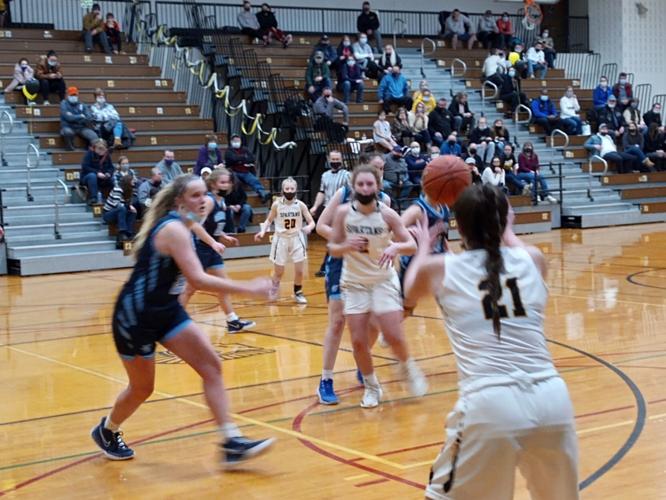 The South Jefferson and Indian River teams meet during a time out in the second half. Dan Mount/Watertown Daily Times

ADAMS — The rematch between the Indian River and South Jefferson girls basketball teams was a worthy sequel to their first encounter.

Bella Davis scored on a putback as time expired to give the Warriors a 58-57 Frontier League “A” Division victory over the Spartans on Wednesday night. Indian River (12-2, 9-0) survived a furious fourth-quarter comeback by South Jefferson (7-5, 5-3) that saw the Warriors nearly surrender an 11-point lead.

“I was little nervous and I didn’t think (the shot) was going in, but it did,” Davis said.

Adrien LaMora netted 18 points and McKenna House scored 13 of her 17 points in the first half for the Warriors, who beat the Spartans, 55-53, in the season-opener Dec. 2 in Philadelphia. Indian River rallied from a slow start to overcome South Jefferson in that game.

“I thought we could have done better, but to beat South Jeff twice is pretty amazing,” said LaMora, who is committed to Division I Canisius.

South Jefferson’s Jackie Piddock led all scorers 32 points while Brooke Perry, Maddie Pfleegor and Liz Chapman each added six points for the Spartans, who got a massive fourth quarter from the Marist commit despite seeing multiple defenders on her most of the game.

“Whenever you have Jackie Piddock on the floor, you have a chance to win the game,” Indian River head coach Jim Whitley said.

Indian River started quickly thanks to House, who hits some mid-range jumpers and a three in the opening half. The senior had been struggling in recent games, but helped Indian River after South Jefferson focused much of its defensive-attention on LaMora.

“I got out of my own head and just played the game I wanted to play,” House said.

“I think we were just moving the ball really well, as well as in transition,” Piddock said. “It got us up and down the floor, which is one of our strengths.”

House’s shooting success helped open the inside game up for Indian River and LaMora was able to get most of her points in the paint. Indian River continued its strong inside play into the early part of the fourth, where it forged a double-digit lead.

That set the scene for Davis, who finished with 10 points, and the Warriors to snatch away the victory. Davis managed to find her way inside and put back a missed jumper as the horn sounded.

“It was just unfortunate the game didn’t work out the way we hoped,” South Jefferson coach Michelle Whitley said. “Jackie made a heck of a stop on the defensive end, but we didn’t come away with the rebound.”

The two teams will likely play each other one more time in the “A” Division playoff championship Feb. 12 at Jefferson Community College. The combined margin of victory of the two games has been three points.