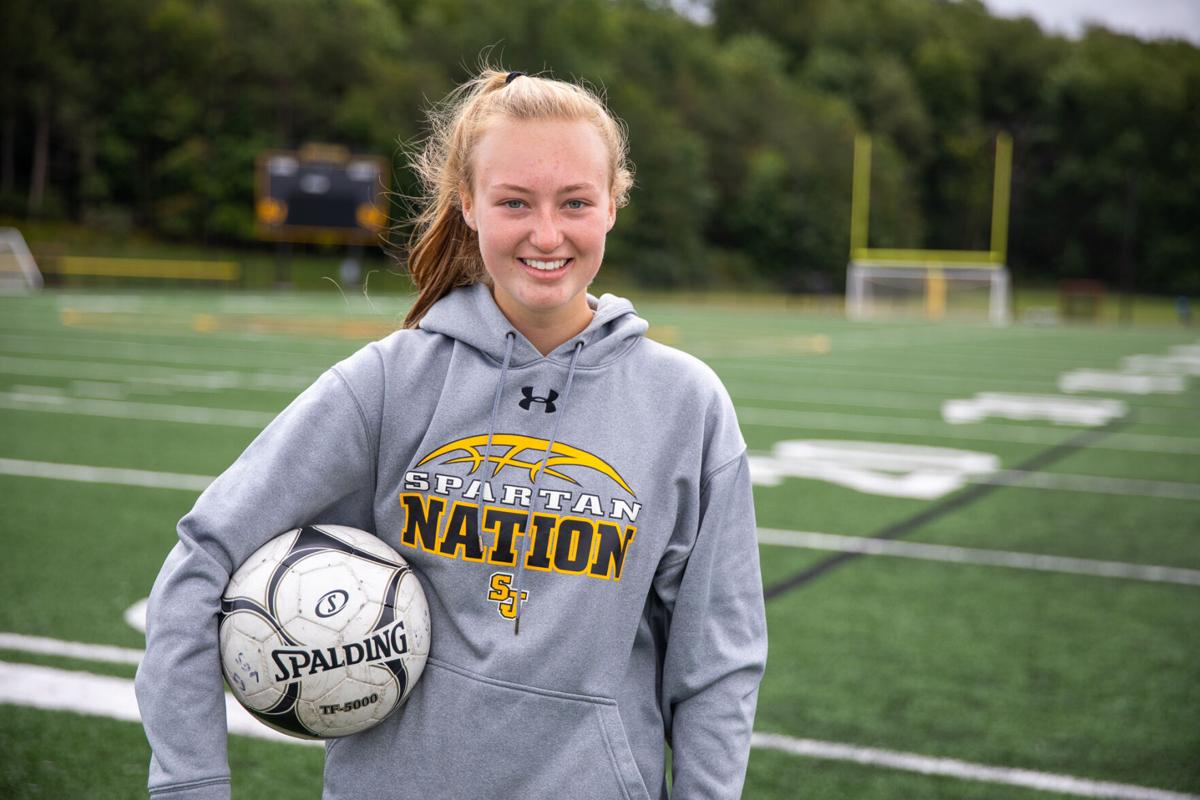 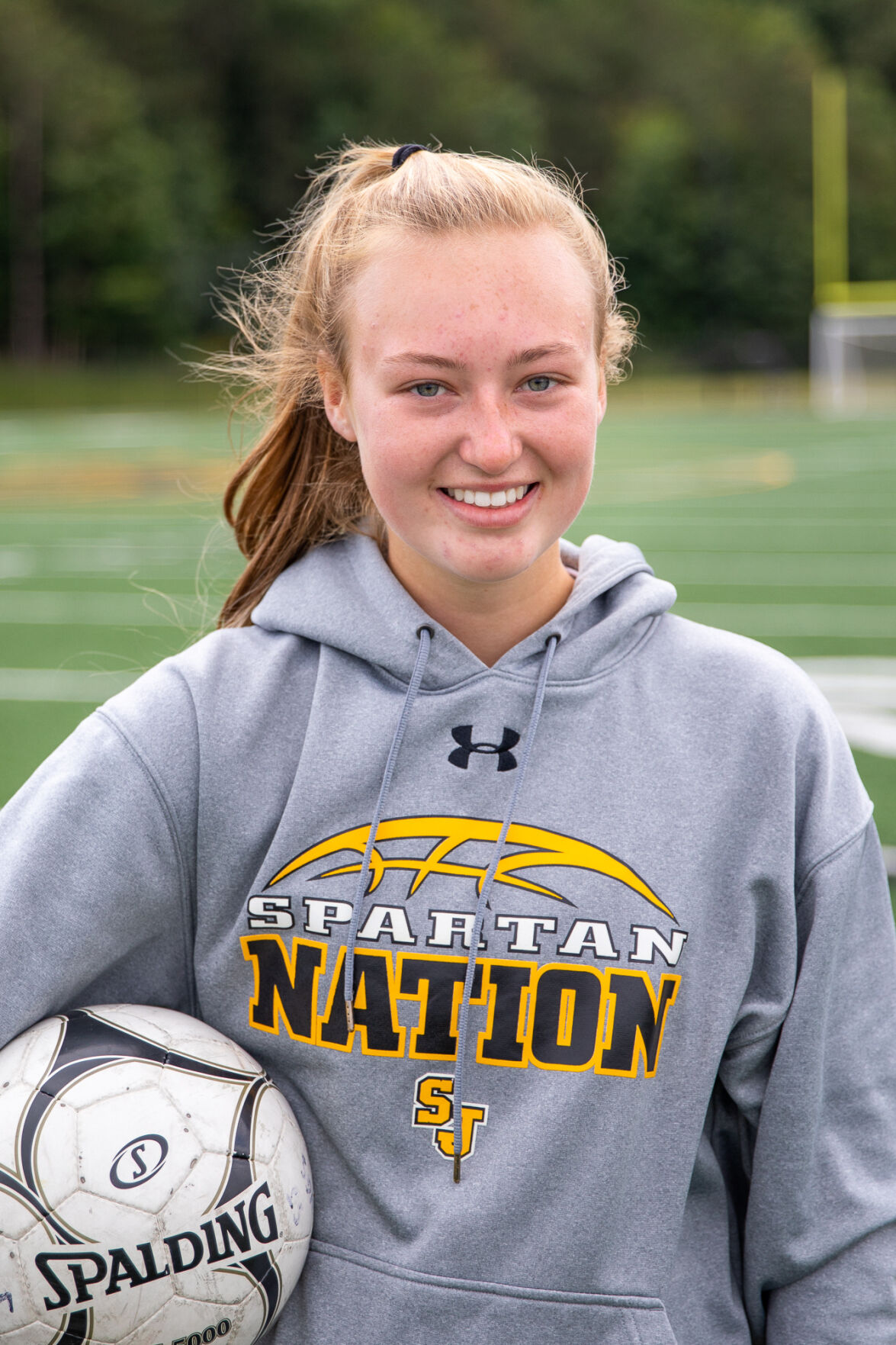 ADAMS — South Jefferson senior forward Macy Shultz has a knack for scoring that’s carried her to the top of the school’s record books.

The Spartans standout has 104 goals and 233 points to be the school’s all-time leading scorer, according to longtime head coach Terry Burgess. She surpassed Ann Colby’s goals and points mark in the latter part of the Fall Sports II campaign. Colby, who was the longtime coach at Belleville Henderson, finished her career with 212 points.

“I’m really excited about the record because I’ve been working toward it since seventh grade,” said Shultz, who broke the goal-scoring record in a 5-1 win over General Brown on April 16.

Shultz was hoping to get the record sooner, but the coronavirus pandemic limited the schedule to six games in the Fall II season played in March and April. However, she’s glad to get out of the way and focus on the upcoming season. Shultz isn’t afraid of being around the goal and has always wanted the ball in scoring situations.

“I’ve always been that kid that’s wanted to score,” Shultz said. “I grew up just scoring and wanting to be in front of goal.”

Shultz, entering her sixth varsity season, has become part of the a multi-faceted South Jeff attack with Jackie Piddock and Alysse Perry. Burgess noted that Shultz’s creativity has made her dangerous in the offensive area.

“She had her back to (the) goal and flicked a pass behind her,” Burgess said. “It’s just something that she’s gained through her confidence.”

There’s one other aspect to Shultz’s game that has made her a great scorer. It’s been something that she’s worked on since her early days with the team.

“We brought her to varsity in seventh grade and we’d never done that before,” Burgess said. “After one particular year we’d wonder how we’d score goals, but she filled that void.”

The senior is also a very integral part of the girls basketball and lacrosse teams. She’s usually part of a multiple-player offense, but has taken those skills from the other sports and used them on the soccer field.

“Playing basketball and lacrosse helps me get the most of what I can do,” Shultz said. “It (the skills) translates over no matter what sport you do.”

Many of her teammates on the soccer team are also on the basketball and lacrosse teams and that connection has helped make them one of the better teams in the league.

One thing Shultz and the rest of the team are looking forward to is renewing their rivalry with Frontier League “B” Division foe Lowville. The Red Raiders played an abbreviated 2020 season in the fall before COVID-19 shut that down while the Spartans played in the spring.

“That’s always been our biggest rival in our league,” Burgess said of Lowville. “We’ve had some great battles and we have mutual respect for each other.”

South Jefferson knows it will be challenged in other divisions, as it faces schools like Watertown, Immaculate Heart Central from the “A” Division and Thousand Islands and Beaver River in “C.” The schedule will test their for a potentially tough Section 3 Class B bracket for the upcoming tournament later in the fall. Teams like Westhill and Central Valley Academy, which played each other in the Section 3 final in 2019, were some of the standouts from that year.

“Class B sectionals are incredibly difficult and probably the most difficult class of all them,” Burgess said.

However, Shultz said that losing last season makes her appreciate this season. They lost out on a full league calendar plus sectional and state playoffs, but the Spartans are grateful for a chance to hopefully have a normal season.

“I happy that we that (a full schedule) this year because last year felt weird not having that,” Shultz said.

Outlook: Watertown went 5-1 during the abbreviated Fall sports II season in the spring. Tatum Overton has already picked up her scoring pace from last season while Alana Mastin continues to be a standout in goal. Immaculate Heart Central and Carthage opened the season with nonleague routs. The Cavaliers’ Katharina Probst scored five goals in a 7-0 shutout over Section 2’s Mayfield. Layla Craig supplied a hat trick in the Comets’ 7-1 victory over Utica Proctor. Indian River’s Rhyleigh Colvard has been the team’s top scorer the past three seasons.

Outlook: Old rivals Lowville and South Jefferson will get back together after being apart last season. The Red Raiders are the reigning seven-time division champions. Macy Shultz, Jackie Piddock and Alysse Perry spearhead the Spartans’ potent attack. General Brown has a new coach in Nick Elkin, who is bolstered by talented athletes Kori Nichols and Karsyn Fields.

Outlook: Beaver River started its season with a 6-0 win over Sandy Creek on Friday. The Beavers got a pair of goals from Emma Roggie and Jasmine Martin. Thousand Islands is looking to reclaim its division title and will rely on Delaney Wiley, Trisha Thompson, Sarah Corbett and Jenna Pavlot. South Lewis’ Kari Gehrke will get her first full season in charge of the team. Jada Pominville, Leah Greene and Barbara Plato will be keys for the Falcons. Sandy Creek moves back to the “C” Division after spending 2019 in the “D” Division.

Outlook: Many in the division think that Lyme and Copenhagen will be at the top of the division. However, the Golden Knights will have to replace some veterans, but still have Raegan Dalrymple, Aubree Smykla and Charli Carroll on the squad. Callie Lafontaine, Karyssa Parker and Kaitlyn Weston power a veteran Indians team that welcomes Mary Guyette back to the sidelines after she coached the IHC boys program. Belleville Henderson finished second in the last full season in 2019. Sackets Harbor is hoping to be competitive in the division. Alexandria and LaFargeville have new coaches as Chelsea VanTassel and Katelyn Docteur, respectively, take over on the sidelines.