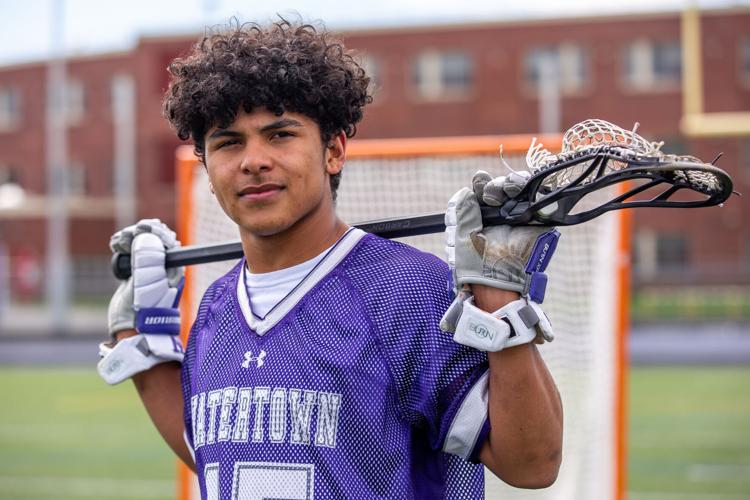 Kyan Combs is one of eight juniors on Watertown’s boys lacrosse team that is off to a 6-1 start this season. Kara Dry/Watertown Daily Times 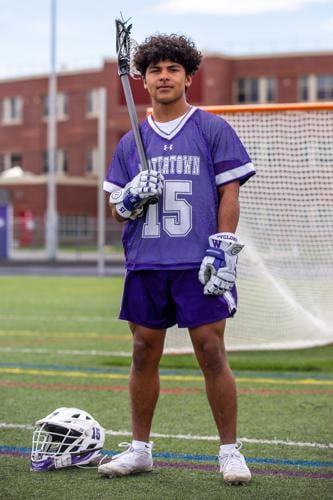 Kyan Combs is a versatile midfielder for Watertown with responsibilities on both ends of the field. Kara Dry/Watertown Daily Times 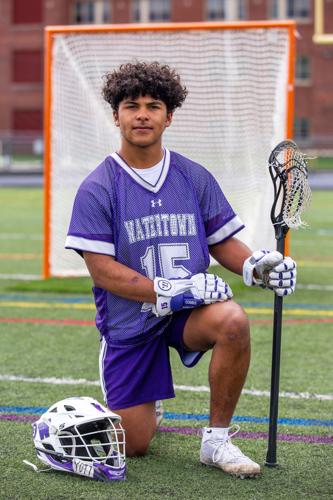 Kyan Combs is one of eight juniors on Watertown’s boys lacrosse team that is off to a 6-1 start this season. Kara Dry/Watertown Daily Times

Kyan Combs is a versatile midfielder for Watertown with responsibilities on both ends of the field. Kara Dry/Watertown Daily Times

WATERTOWN — Kyan Combs may not be the most vocal lacrosse player, but his presence on the field speaks volumes.

Combs, who speaks up when he has to, has emerged as versatile contributor for Watertown’s boys lacrosse team.

“Kyan is not the loudest kid or the most emotional kid,” Watertown coach Brian Navarra said of Combs, who plays in the midfield. “But he leads by example in practice and in games, off the field. And certainly by playing year round, he does an awesome job representing who we are as a program.”

Combs, from his position, has developed a balanced game as he contributes on offense and defensively as well.

Combs is one of eight juniors on a Cyclones team that is off to a 6-1 start this season and which includes only one senior. But make no mistake, this group of underclassmen, led by the juniors, is tight-knit as many of them grew up playing lacrosse together.

“I started out in first grade, I started out with an (Immaculate Heart Central) team because Watertown didn’t have a team when I started,” Combs said. “I started with the core group of guys that are with the varsity team right now, we just played all the way up together and it’s been pretty good, we’ve been playing together for a while.”

“There’s that group that all kind of grew up together,” Navarra said. “They’ve played, they’ve hung together, and Kyan has helped the whole team get better.”

While Combs has generated 22 points this season, including 15 goals, Watertown is led offensively by fellow junior Jack Clough, an attackman who has totaled 23 points, including 19 goals.

“They’ve all been just talented growing up, they’ve just always had a knack for it,” Combs said. “I had to work hard to get like where they were, I had to catch up with them. Mick’s a great feeder getting us the ball. Jack Clough is always catching everything in the crease, he can finish. Joe Girardi’s locked down on defense, he can shut down anybody, so they all work really hard.”

Watertown so far has gone unbeaten in the Frontier League with a 6-0 record.

The Cyclones will put its perfect mark on the line when they play at Indian River at 6:30 p.m. tonight in the second meeting of the season between the two teams.

“It’s a revenge game for them, I think they’ll be coming to play and I know they want us bad,” Combs said. “So I think it will be a fun game for us. And to play against a (Division I) commit, Rowan Marsell, that will be a tough matchup for us.”

The team’s early-season success has included an 11-6 victory over archrival Carthage on April 7, during which Combs scored five goals, which is his career best output in a game.

“That was a good win, it’s always fun to beat Carthage,” Combs said. “We’ve always been rivals and stuff like that, so the coaches are always like hyping us up for that game.”

Standing at 5-foot-6, Combs used to primarily play up top at attack, but was encouraged by his dad John, who himself played lacrosse at Watertown, to make a move to the midfield.

“I’ve always been more on the offensive side,” Kyan Combs said. “I started out playing attack, but then around fifth or sixth grade I started getting a little faster, so my dad was like ‘all right, we’ve got to get you at middie.’ So I started running with the ball a lot more and then I kept working at it so I could get my shots better with both hands and stuff. So I’ve been more of an offensive guy since then.”

“Honestly, he’s also a phenomenal short-stick defender for us,” Navarra said. “He’s on the wing on faceoffs and there’s a lot of games where he could probably have more goals, but he kind of passes it off to his teammates. He’s not the guy that is always in the limelight, but he does things where he deserves to be in the limelight.”

After Combs’ season last year, in which he contributed 40 points, including 34 goals, which ranked second on the team to Clough’s 50 points, he went on to play over the summer for the Sweetlax team, which is based in Rochester.

“I played defensive middie for a travel team out in Rochester, so I got a lot of experience there,” Combs said. “Here, I play more on the offensive side of the ball, so I try and take my opportunities there.”

Combs, who used to play football at Watertown, found the experience very valuable in his continued growth as a lacrosse player.

“It’s almost 2 1/2 hours (to get to) every practice, every Thursday during the summer and then tournaments on the weekend,” Combs said. “It was a great experience, so I got to learn a lot from the coaches.”

Last year, Watertown won 13 games, including forging a 9-1 record in the Frontier League to win the league championship. It went on to defeat Whitesboro, 15-3, in the first round of the Section 3 playoffs, before losing at East Syracuse-Minoa, 9-7, in a semifinal.

“We definitely feel like we’re the next wave of players,” Combs said. “That group last year kind of set a precedent for us, we want to be like them and even better. Go make a push in sectionals and hopefully win a title.”

Now Combs and the Cyclones, who are at the midway point of their league campaign after being dealt a 10-6 loss at West Genesee on Saturday, are hoping to learn from this setback and make a memorable run this season and forge their own legacy.

“We try and carry on Watertown’s tradition and try and start new things,” Combs said. “And try and create a new tradition of winning sectionals and stuff with our group.”

Navarra added about Combs: “He’s developed into a great leader. He’s just a quiet kid, but he makes such an impact for us.”