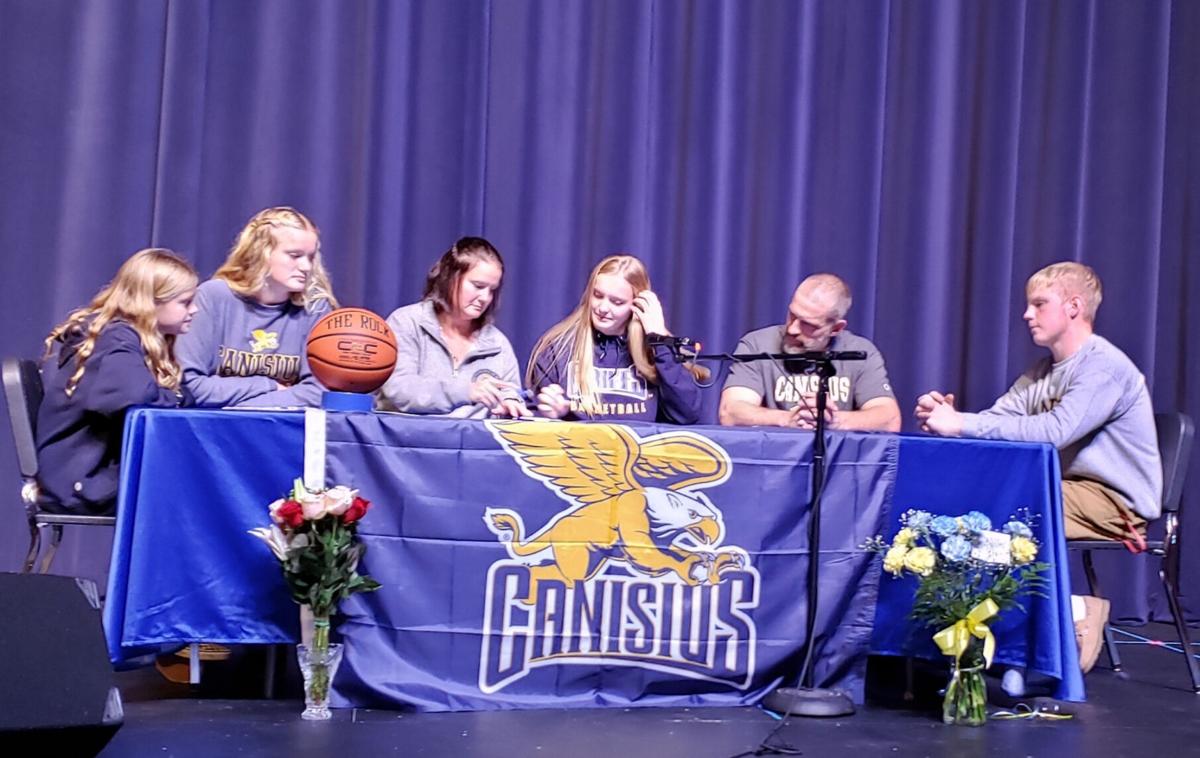 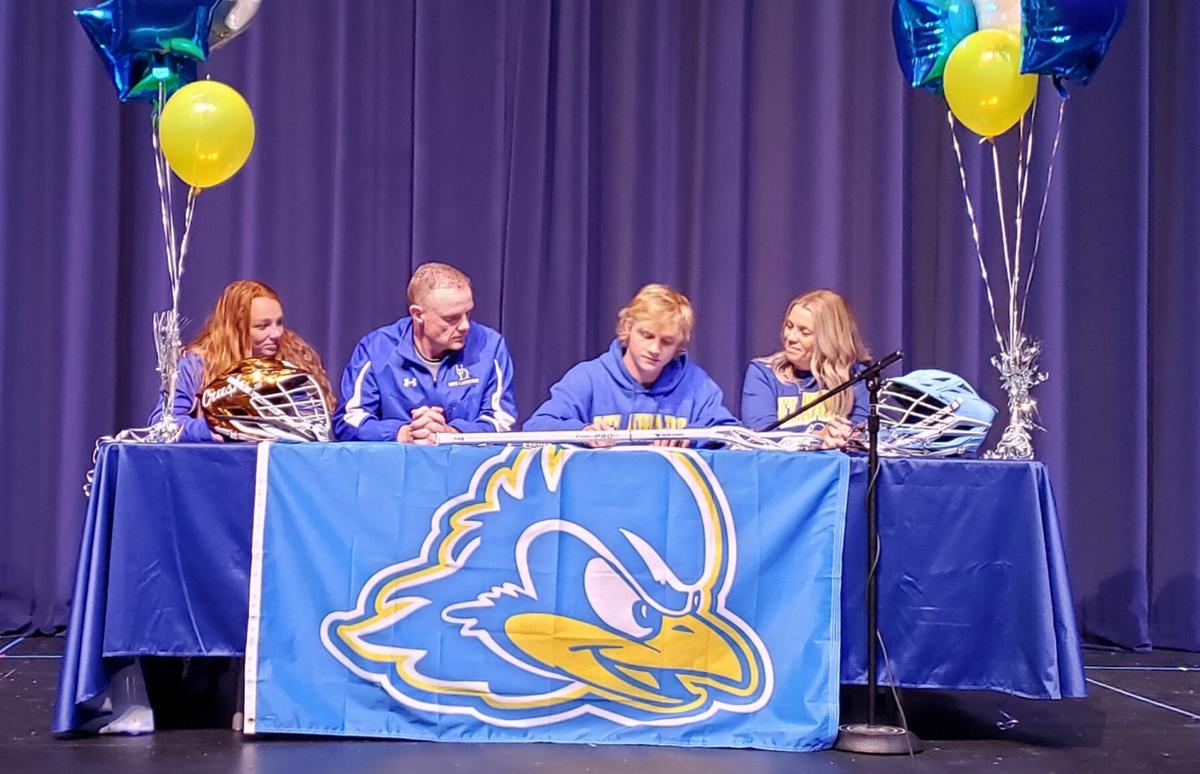 PHILADELPHIA — Three Indian River athletes, including two who are bound for NCAA Division I schools, signed their national letters of intent Thursday.

Rowan Marsell signed on with the University of Delaware to play lacrosse, while Adrien LaMora made her choice official to attend Canisius to play basketball.

All three signings happened simultaneously at Indian River’s main auditorium, with three tables set up on the stage, on which the athletes were surrounded by their families.

“I was more excited when I signed the first one, but it’s awesome,” Marsell said. “Now that I can do it with my classmates in front of everybody, it’s an honor. This one is just as special.”

Marsell, who is also a standout football player, chose Delaware over several Division I schools.

“It’s a perfect fit for me,” Marsell said of Delaware. “They reached out Sept. 1 and I got to get to know the coaches, loved them. They took me in like I was family and I fell in love with the campus as well, so it was an easy decision.”

He was also encouraged by the Blue Hens’ recent success as a team.

“They have a real chemistry, the team’s super close,” Marsell said. “It’s a great coaching staff and I’m excited to take the next chapter there.”

“Last year, they were in the top 25 in the nation,” Marsell said. “So, they just started to be prominent. ... They’re a really fast paced, up and down team, they like to run and gun and I think that fits my athletic ability and the way I play. So we match up pretty well.”

Marsell has played both attack and in the midfield for the Warriors. He led Indian River in points (69) and assists (37), while scoring 32 goals last spring as the team went 7-7.

“It’s awesome from when I started, we weren’t anything and now we’re starting to become big in the Frontier League and we’ll become the team to beat,” Marsell said. “So it’s cool to watch us transition as a team to where we are now.”

Marsell helped guide the Warriors football team to the Section 3 Class A final where it was beaten, 61-26, by Christian Brothers Academy last Friday. He totaled 15 rushing touchdowns with the team as well as throwing for another.

“Lacrosse is right there with football,” Marsell said of his passion for both sports. “I fell in love with both of them ever since I was little and my dad has been around for me in both.”

He’ll hit the lacrosse field for his final season after he competes with Indian River’s indoor track team, which is also coached by his dad, Cory.

“Rowan on the lacrosse field is a playmaker,” Davis said. “Whether we need an offensive, defensive, or transition play, he’s able to battle and make plays for us.”

As far as his academic choices at Delaware, Rowan Marsell said: “I’m going to enroll in business and I’m going to minor in biology. We’ll just see where it takes me.”

LaMora selected Canisius over the University of New Haven in Connecticut and Le Moyne College, both of which she also strongly considered.

“I’m super excited and I’m so glad I made this choice,” LaMora said. “I fully believe in everything that I made the right choice. ... Just the players, the coaches, the atmosphere, just everything about it.”

“The head coach (Sahar Nusseibeh) is new there this year and she’s really looking at how to build the program and I think that’s really special,” LaMora said. “Because she’s putting so much work ethic into the girls and so much work in, it’s amazing.”

“Her work ethic is just phenomenal,” Indian River girls basketball coach Jim Whitley said of LaMora. “She’s just got a motor that just does not stop and it’s constant. And with all the kids, she’s a great role model because all the younger kids see that and it’s contagious.”

In Indian River’s abbreviated season in the spring after schools were allowed to play the sport after much of the season was delayed because of the coronavirus pandemic, LaMora led the team in points scored (163), with an average of 23.3 per game, as well as in rebounding (13.0) and assists (3.7).

“She has a ton of stats that are just unbelievable, she’s in the top 5 all-time at Indian River in just about every category, and she hasn’t even started her senior year yet,” Whitley said.

“Definitely, I’m excited to get the season started with my teammates,” said LaMora, who mostly plays at guard, but can help out all around the court. “It was definitely different, we only had a short season, no championships or playoffs. But it was a great year of growth for our team, for our teammates to bond together and just grow as a team.”

A five-year varsity starter for Indian River, LaMora is also only 46 points shy of reaching the career 1,000-point plateau.

“I had it down to a top three,” LaMora said of Canisius. “And once I visited Canisius and met all the coaches, I knew it was the exact place for me.”

Whitley considers LaMora signing on with a Division I school as a notable occurrence, one that doesn’t happen often in the north country.

“This is special, because they don’t just give those scholarships away,” Whitley said.

LaMora said she also knows what academic path she wants to take at Canisius, majoring in biology.

Goodrich chose Lake Erie over several other schools and likes the atmosphere at the college.

Goodrich generated 39 points, including scoring 26 goals and assisting on 13 others, last spring for the Warriors in girls lacrosse.

With Goodrich as one of the team’s leaders, Indian River went 7-8 record.

“I feel like their coaches were like so personable that they really wanted me to go there,” Goodrich said of Lake Erie. “It’s just a really nice community, it feels like home to me.”