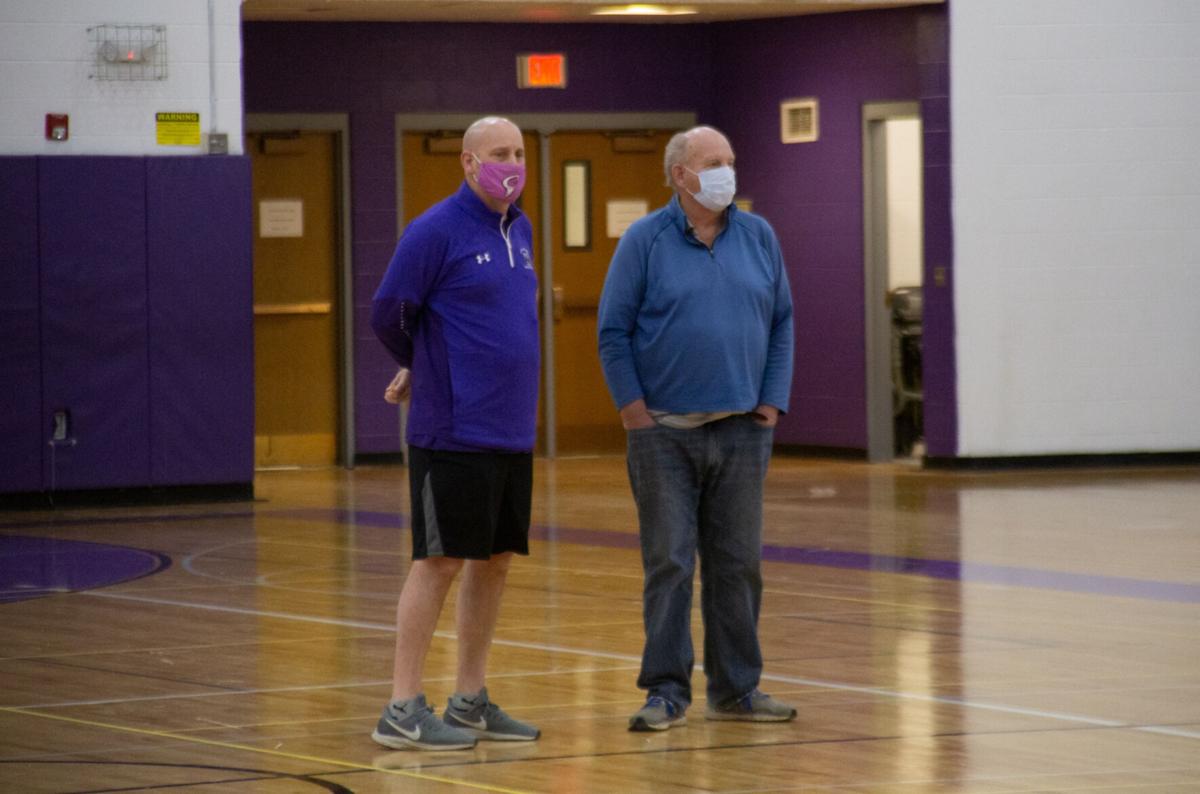 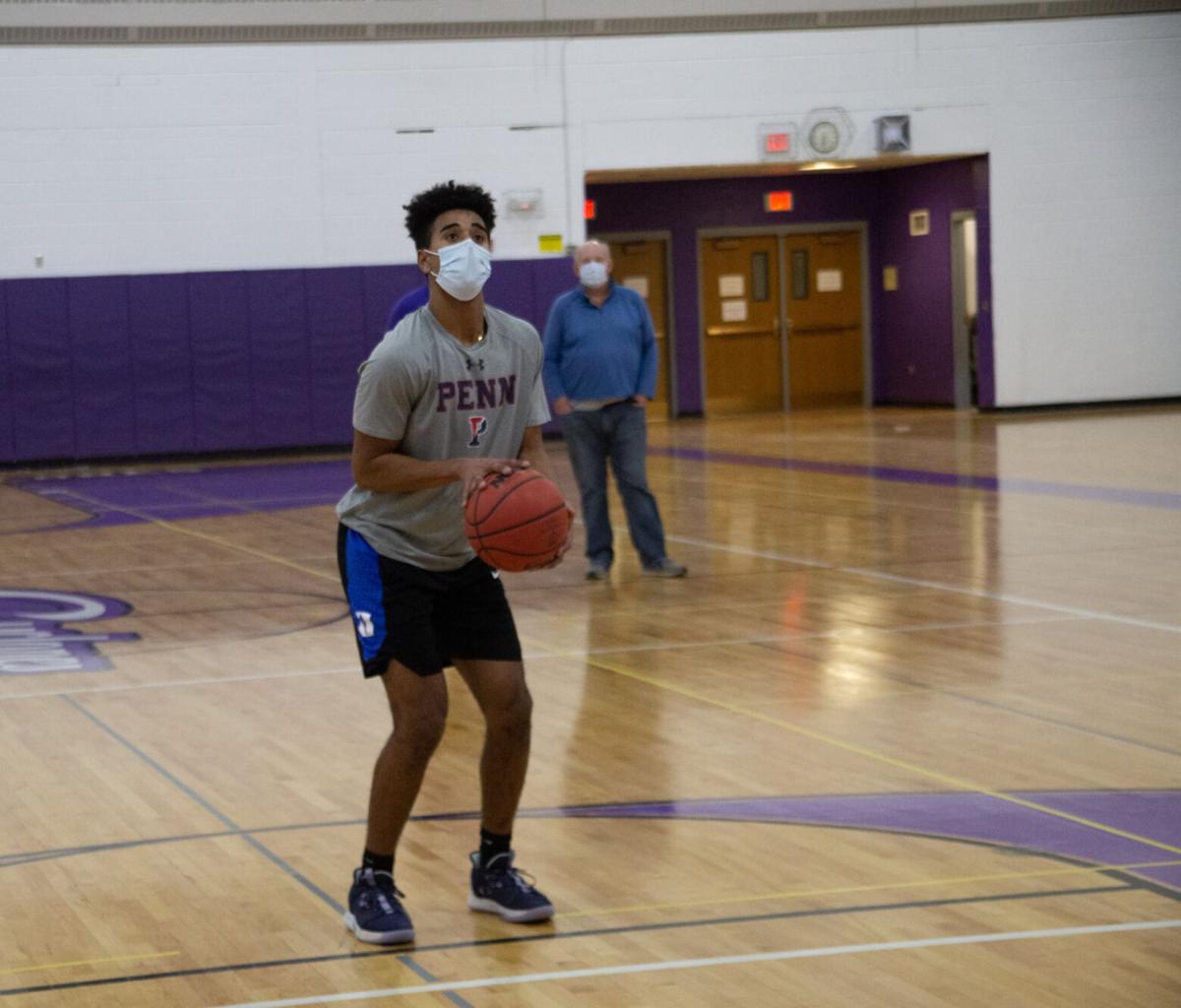 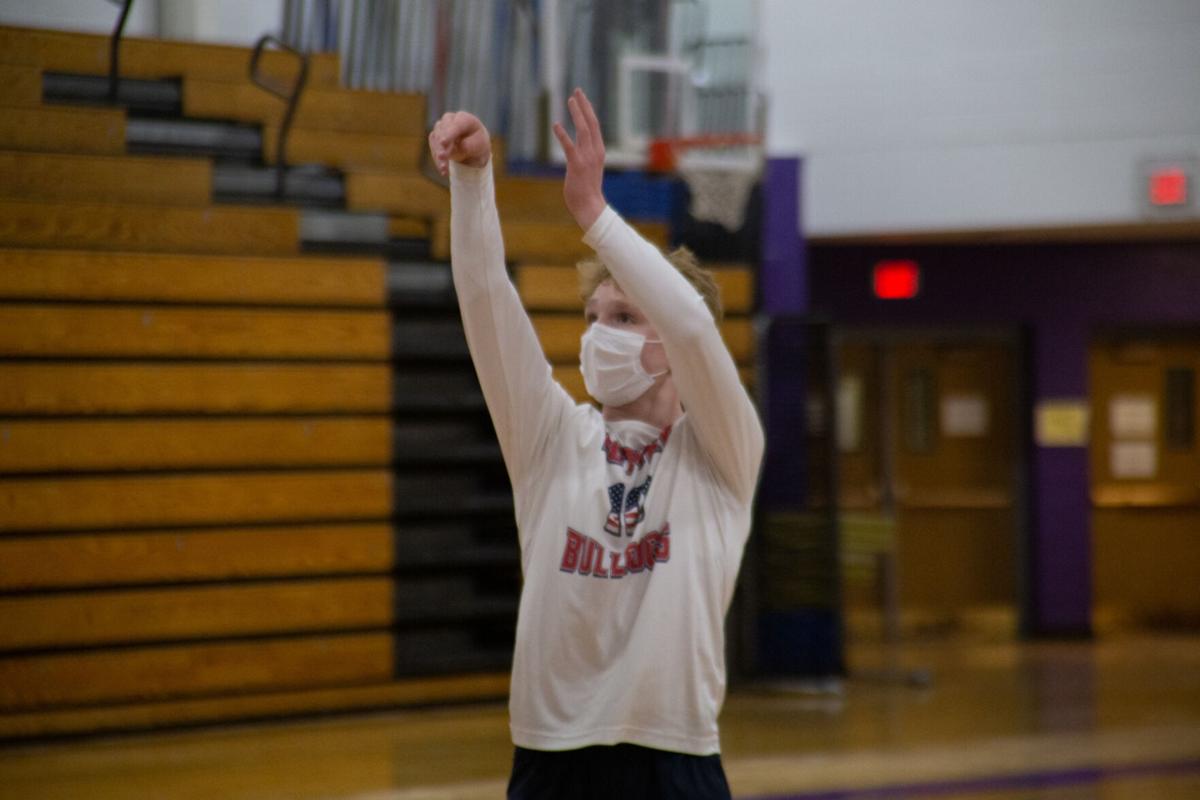 WATERTOWN — Ed Adams only had seven members of his team in the Case Middle School gym for his first practice as head coach of the Watertown boys basketball team.

He’ll have the other half of the team later this week, when those students are back in the classroom.

For Adams, formerly a youth and JV coach and son of former longtime Watertown boys coach Paul Adams, he’s beginning his varsity coaching career in the most trying of times.

COVID-19 has forced those schools willing to participate in high-risk winter sports to do so under strict regulations. Players must work in “pods,” only low-to-no contact is allowed, and everyone is masked. Also, for the first two weeks, Watertown will be operating its practices in cohorts — only the students in school that day will be able to attend practice that evening.

Furthermore, Adams isn’t entirely sure when he’s preparing for. Interscholastic competition for high-risk sports can’t begin until Jefferson County’s 14-day rolling average of positive cases is under 4% — a metric agreed upon by the county superintendents and the Jefferson County Public Health Service.

As of Monday, that number is at 6.7% according to the state’s dashboard. So it’s unclear if or when we’ll see games.

Practices began Monday, offering Adams the opportunity to build on his intramural workouts and prepare his team for possible games.

The Cyclones offer a different look from the past few years. Both Ryan Peters and Marlon Hinds-Ventour — huge scorers for the team — graduated last June. Their departure creates a void of points and minutes, and Adams is going to spend much of the preseason figuring out who can fill it.

“We’re just going to retool, we’re going to find someone else that could do that and I know there are some guys who are very capable of filling those shoes,” Adams said. “It will be tough shoes to fill, but I think by challenging the kids to do that, somebody will step up.”

One of those pieces could be Joel Davis, a junior in his second varsity season. He saw some minutes last year, but the true value came in going against Peters and Hinds-Ventour.

“It kind of helps distribute your game, if you want to say that,” Davis said. “From guarding Ryan in practice to Marlon in practice, you gotta realize that Ryan would try to use your size against you while Marlon was quick and speedy. So, it kind of evened out. I learned how to play defense against bigger guys and faster guys.”

However the 2020-21 season ends, Davis will have next year to put in work for the varsity.

For seniors like AJ Carter and Kevin Harp, 2020-21 is it. While they’ll hopefully get a chance to play in actual games, they understand their responsibility extends further than scoring points and playing defense. Younger players need mentoring, a responsibility that falls on the seniors.

“When you’re in practice you have to make sure to teach them a lot of tricks and tips,” Harp said. “Make sure they’re going through it the right way, but if they’re not you gotta show them the right way until they get it down.”

Both players are entering their second varsity season. For Carter, a point guard, he sees himself contributing as a facilitator on offense, a skill he learned from practicing and playing with Hinds-Ventour last season.

“Creating off the dribble, creating space from my defender, stuff like that,” Carter said. “And being a leader and knowing the plays really well, I learned that from him as well. Especially in practice as well, when he was going with the second squad and I was going with the first squad at point, he would teach me like how to separate off the dribble through a defender. And again, keeping my teammates involved and keeping my head in the game.”

Adams takes over for Jeff Britton, who stepped down from coaching the boys team after 18 seasons this past June. To start the first day of practice, he stood next to his father Paul at midcourt and watched his players work on free throws in their respective pods.

Along with his father, Paul, his brother, Jay, coaches the Central Square varsity.

“I just listen to their stories,” Ed Adams said. “I try not to say too much and I just try to listen as much as I can. I remember a picture of when I was a kid at my first basketball practice with my dad, I was probably 6 years old, keeping stats and stuff. I always try to be a good student of the game, try to learn from other people, not just from them, but from others as well.”

The title bluntly encapsulates the majority of what basketball — and all high risk sports — will look like this winter. While Whitley — and everyone else — waits to see if a season will actually occur, his team began its official practices Monday afternoon.

While similar to the intramurals the coach has put on, there were some differences.

“We are doing a lot of groups of two and groups of three and we’re going to keep them in those groups,” Whitley said. “I’m used to doing a lot of team competition, like we need to make this number in a certain amount of time, we’re not able to do all of that stuffs. We’re kind of breaking it down into smaller groups, there’s a lot of individual skill work.”

While Whitley was fortunate to have all but one player be in the same cohort, allowing him to immediately practice with his full team, South Jefferson coach Michelle Whitley only had four players on her first day.

The situation is far from ideal.

“It’s a good thing,” Michelle Whitley said, “but definitely not in the form that we wish it was back.

“Our school district is requiring us to do what we’ve been doing since December with intramurals as far as who we can have at practices,” she added. “I had four kids (today). With practices now, you can have low-to-no contact, you can share a ball, you can do passing things. So, it’s opened it up a little bit, but the guidelines aren’t exactly what I wanted to see and it’s kind of funny. They have all these limitations as to what they want it to look like, but then March 1, you’re supposed to be able to play games. So, how do you prepare for that when you can’t practice that way?”

She’ll have seven players in her other cohort later this week, the full 11-player varsity team will finally be together next week. Until then, Whitley says there is plenty she can do with only four kids in a practice.

“I can do a lot with four kids in practice, trust me when they came out there they worked hard,” she said. “It’s what I do for a living, which is to organize skill work. And you can work on defense, footwork and things like that.”

While dribbling basketballs returned to a few FL schools, so did volleyball and wrestling — sports also considered high-risk by the New York State Department of Health.

Like basketball, it’s unclear when these Jefferson County teams are going to begin having matches against other area schools.

“I’m just grateful to have kids back in the room and once we get rolling,” Carthage wrestling coach Don Dorchester said. “We can hopefully have conversations about having matches.”

Wrestling, a sport with a lot of close contact, is used to sanitizing equipment and playing surfaces.

“We joke that the wrestling room is the cleanest place in the school,” Dorchester said. “We’re used to mopping and cleaning before and after practice.”

Due to not wanting to mix cohorts, practices as of now are split in two. While the separation is not permanent, it has players missing their teammates.

“I know some of the girls are down,” Indian River volleyball coach Alyssa Sidmore said, “some of their friends are in different cohorts and we’re not mixing them right now.”