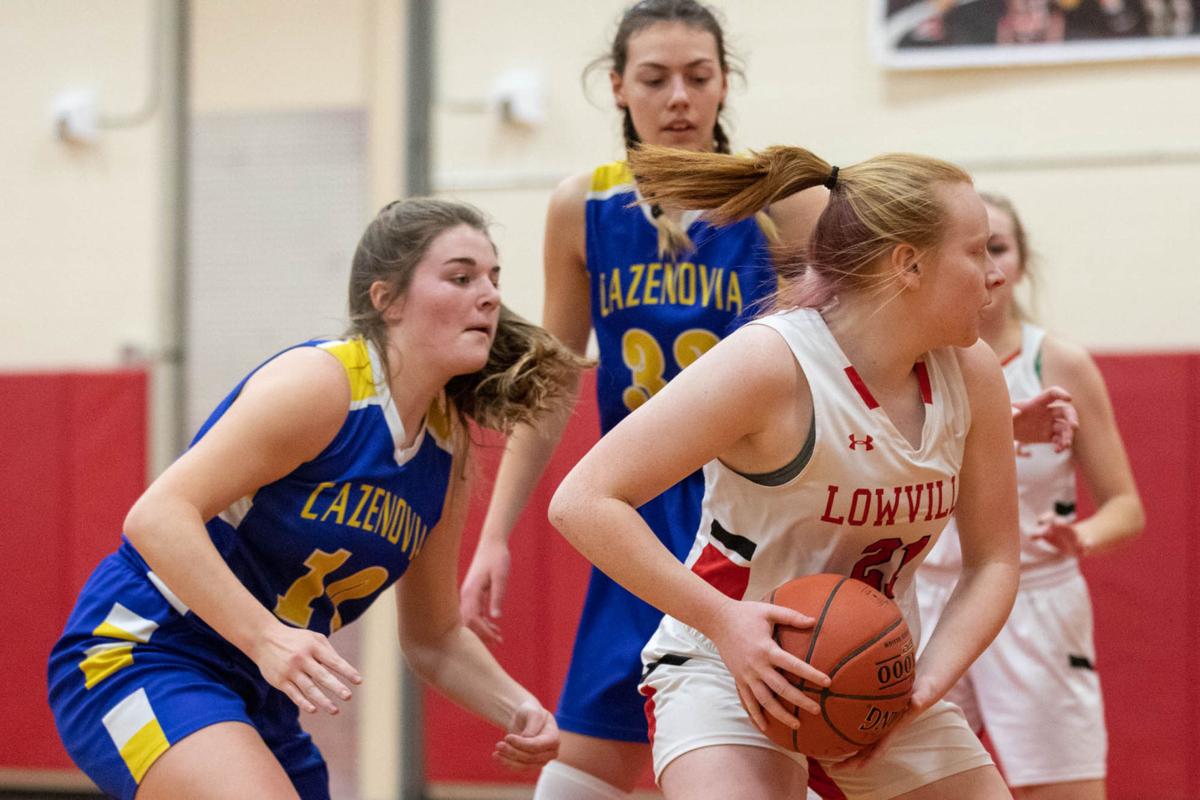 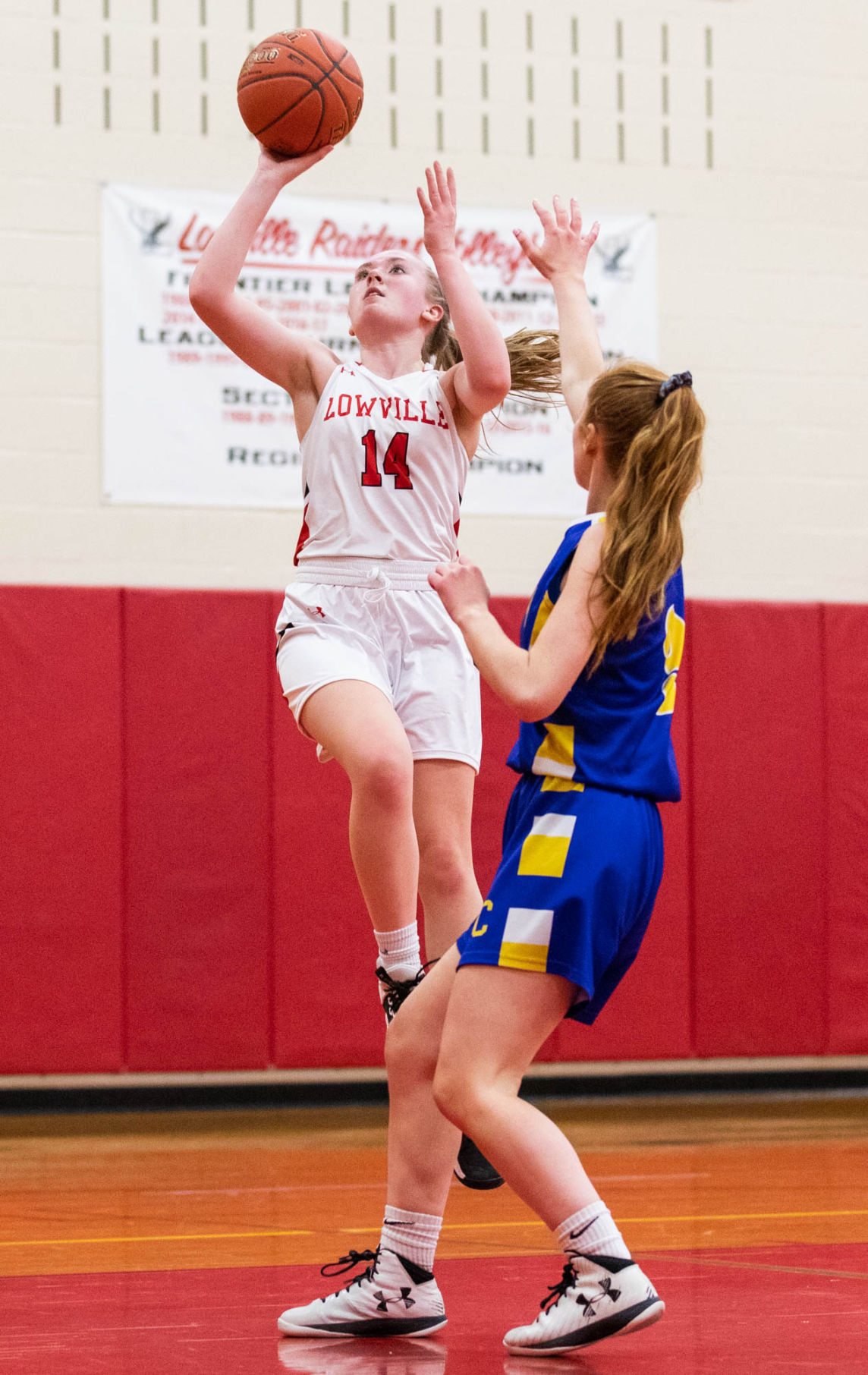 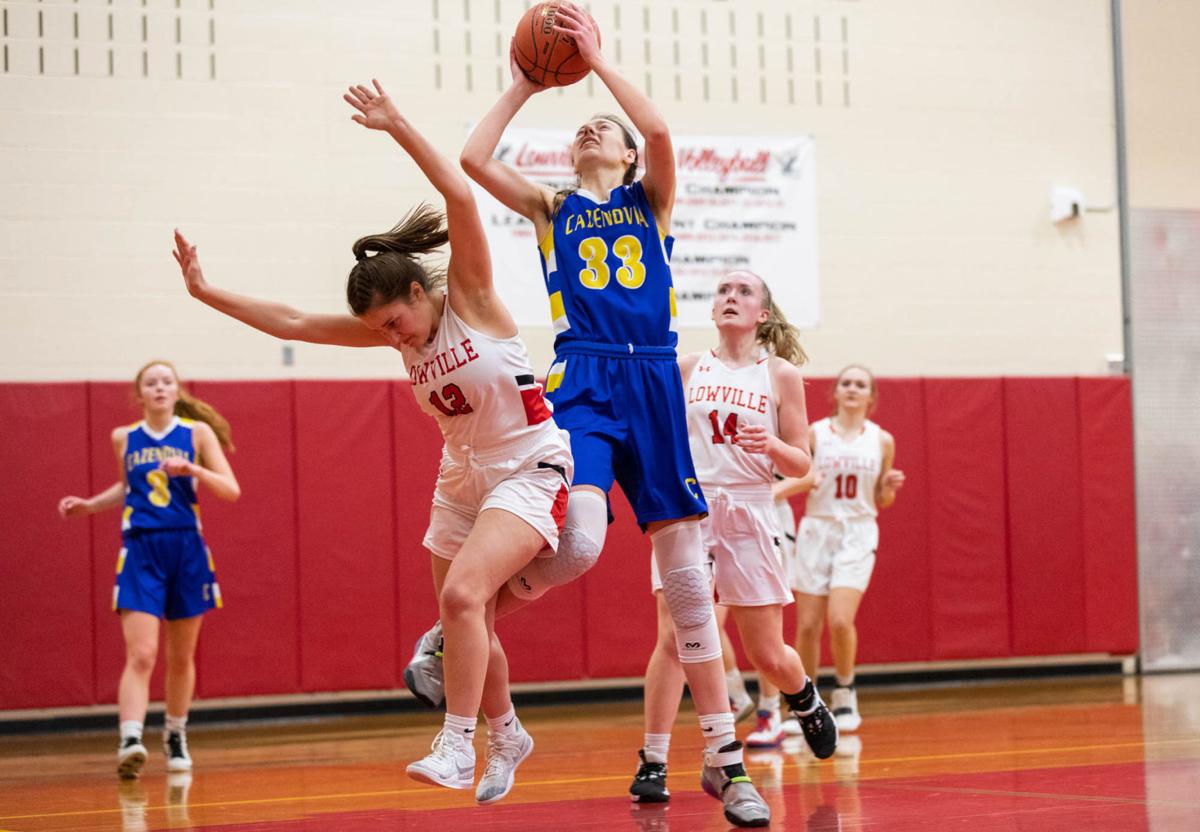 Cazenovia’s Lindsey Lawson, center, attempts a layup while knocking Lowville’s Nicole Freeman, left, onto the floor and out of bounds during the Section 3 Class B preliminary round at Lowville Academy. Sydney Schaefer/Watertown Daily Times 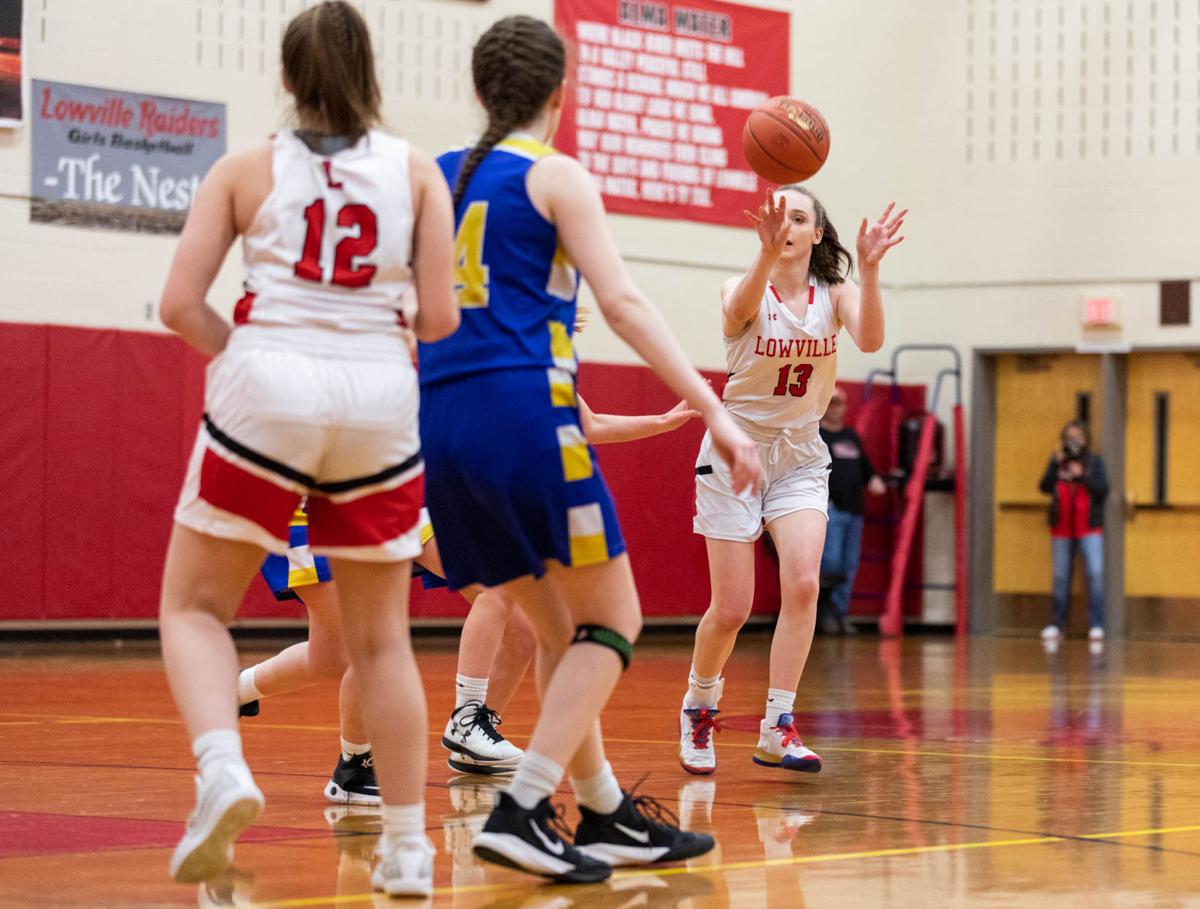 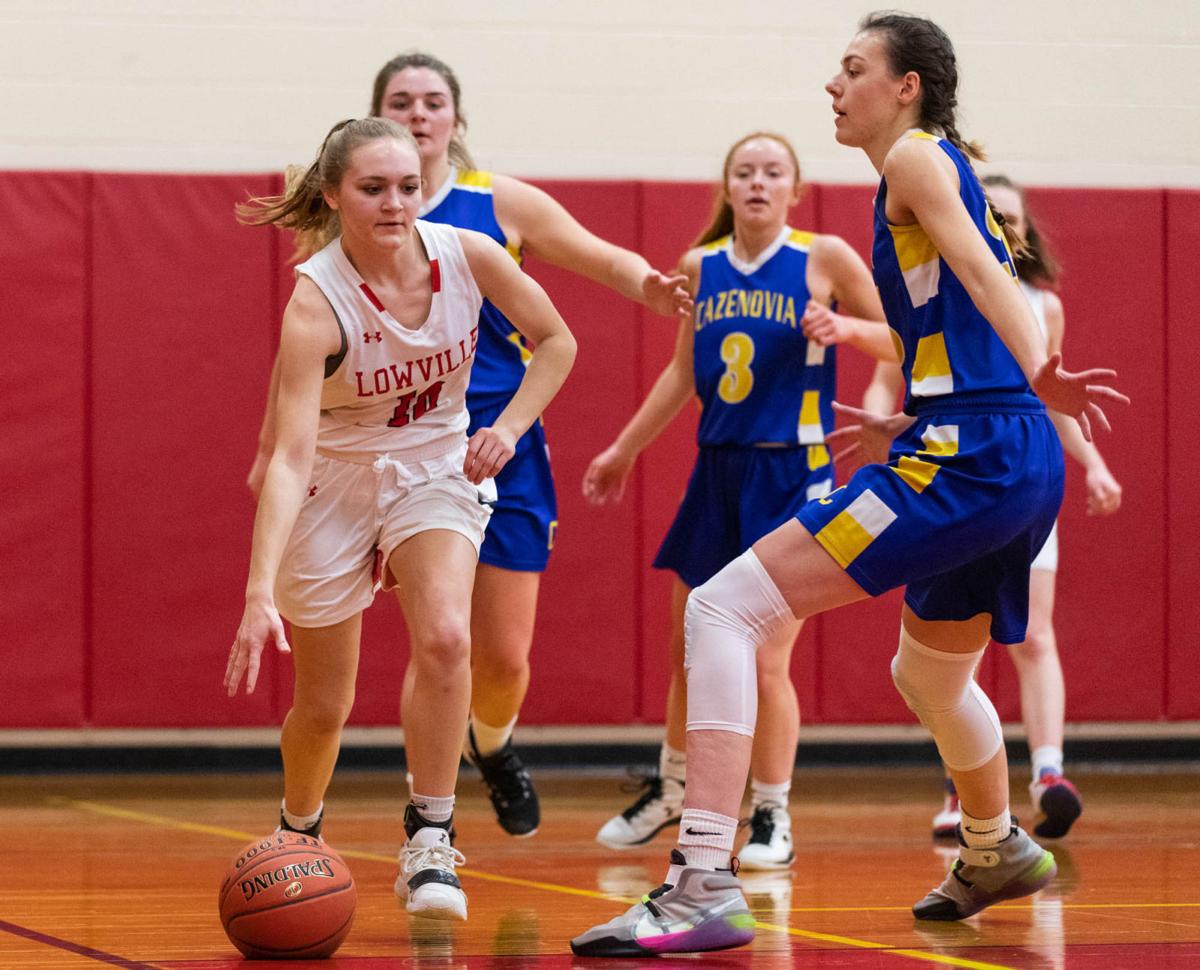 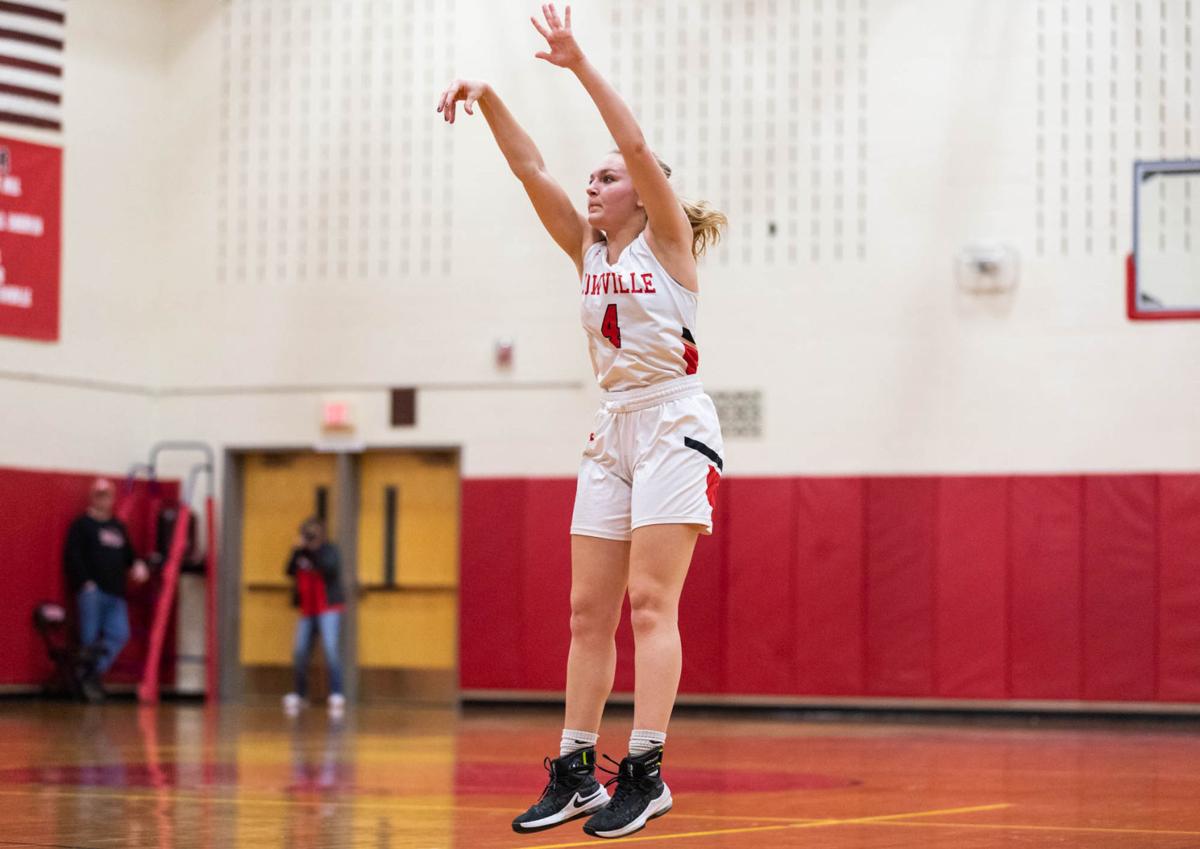 Lowville’s Anna Wood follows through on a 3-pointer during the Section 3 Class B preliminary round Friday night at Lowville Academy. Sydney Schaefer/Watertown Daily Times 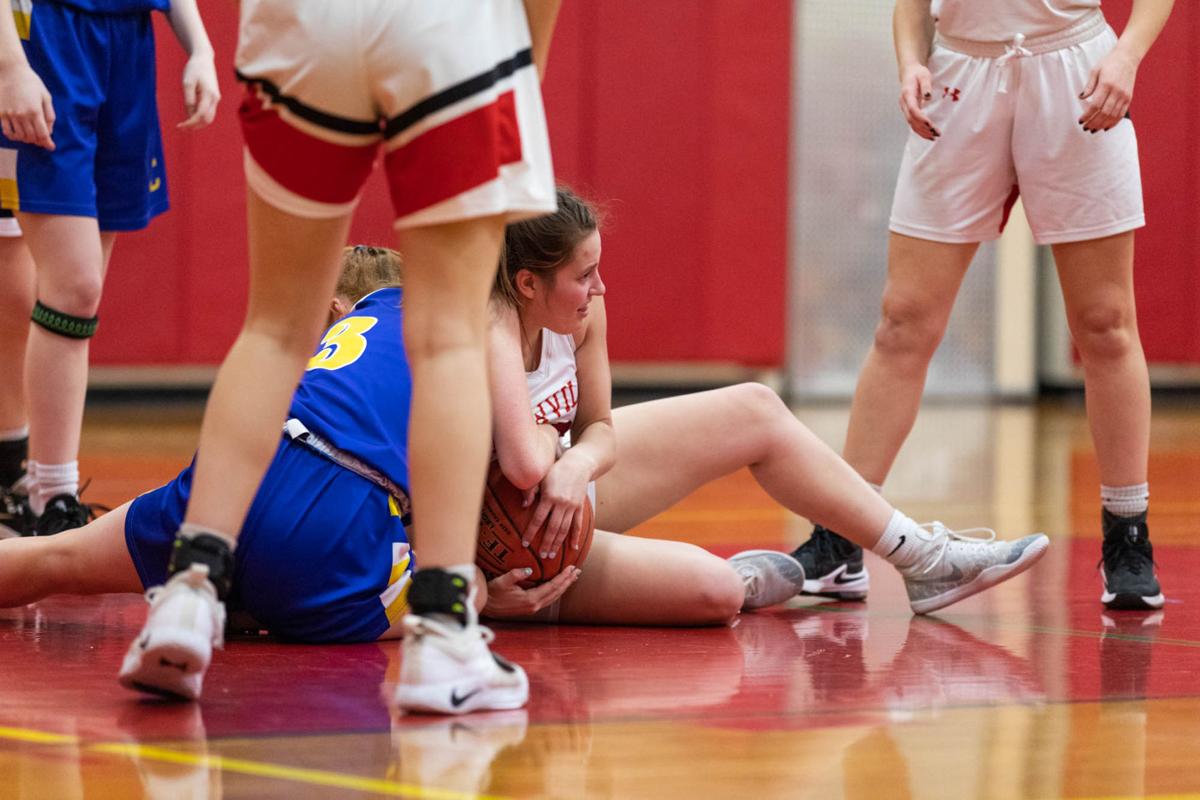 Lowville and Cazenovia players wrestle over the ball during the Section 3 Class B preliminary round Friday night at Lowville Academy. Sydney Schaefer/Watertown Daily Times 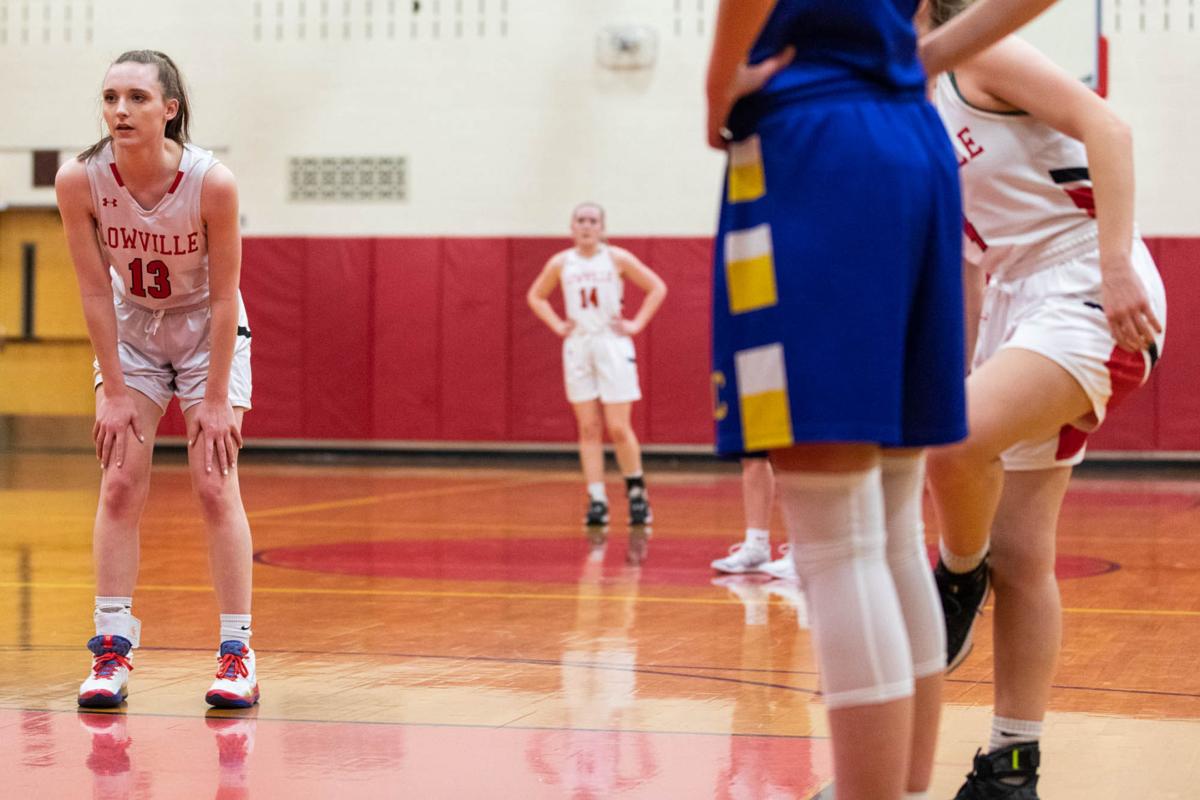 Cazenovia’s Lindsey Lawson, center, attempts a layup while knocking Lowville’s Nicole Freeman, left, onto the floor and out of bounds during the Section 3 Class B preliminary round at Lowville Academy. Sydney Schaefer/Watertown Daily Times

Lowville’s Anna Wood follows through on a 3-pointer during the Section 3 Class B preliminary round Friday night at Lowville Academy. Sydney Schaefer/Watertown Daily Times

Lowville and Cazenovia players wrestle over the ball during the Section 3 Class B preliminary round Friday night at Lowville Academy. Sydney Schaefer/Watertown Daily Times

LOWVILLE — When the season began, Lowville, like every girls basketball team, pointed to this game. The Red Raiders didn’t know then that they would be hosting Cazenovia, but they did know that it would be another chance to make it out of the first round, something this crop of players has yet to do.

By halftime, Sara Wood already knocked down three 3-pointers, and in the second half, she hit two more.

Overall, the eighth-seeded Red Raiders hit 11 3s, making up 33 of their 58 points in their 58-51 victory over No. 9 Cazenovia in the preliminary round Friday of the Section 3 Class B tournament.

“I think our biggest goal was getting this first win, after that it’s just nice to play,” said Wood, who scored a team-high 17 points. “We really want to win and keep playing, but this win was huge for us.”

According to Wood, the loss to General Brown in the Frontier League final last Friday led to a tremendous week of practice.

“I think it’s probably the hardest week we’ve gone,” Wood said. “We rebounded a lot, we definitely played a lot of games that focused on rebounding because we definitely had to do that to win this game.”

It took a quarter for the Red Raiders’ shots to start falling, but they eventually did and did so in bunches. Wood finished with five 3-pointers while her sister, Anna (12 points), finished with four and teammate Sydney Brown (10 points) had two.

Both the first and third quarters came to a close with a buzzer beating three, the first out of the hands of Sara Wood and the second from Brown.

That type of consistent scoring helped Lowville (16-5) build a comfortable lead that allowed them to withstand a slight Cazenovia comeback in the fourth quarter.

“Sara and Anna shot really, really well today and I think that was a big part of what we do,” Brown said. “A lot of our games are just about driving to the basket, so it was nice to be able to hit open shots.”

Defeating Cazenovia (14-7), however, also meant limiting Lindsey Lawson — the 6-foot-3 Harvard commit has been a force for the Lakers this season and towers over even the tallest girl on Lowville.

The Red Raiders implemented a new defense to try to limit her effectiveness.

“We just wanted to front her all over the court, wherever she was. I wanted to make it hard for her to get the ball,” Lowville coach Chris Riley said. “I think mostly everything they do cycles through her, so the harder she had to work to get the ball the better odds we had. Because once she gets the ball, our 5-foot-5, 5-foot-7 isn’t going to do a whole lot.”

Lawson finished with a game-high 32 points, while Cazenovia’s next highest scorer was Carleigh Szalach (nine points).

Like Sara Wood alluded to, controlling the rebounds was going to be a challenge, but also a key to Lowville’s success. The Red Raiders were particularly effective on the defensive glass allowing them to control the time of possession by keeping Lowville from picking up many second chances. “[Lawson] gets a lot of rebounds, so sometimes I think when you have a player like that gets almost everything, the other kids are a little susceptible to not getting rebounds or not boxing out as strong,” Riley said. “That’s what I saw when I scouted and I really tried to preach to the girls to get after it because they were looking for [Lawson] to get the rebound. I think we did, we talked about that just now, a great job getting offensive rebounds, getting us second and sometimes third opportunities.”

Barring an upset, the Red Raiders will play No. 1 Oneida on Wednesday at Oneida in the quarterfinals.