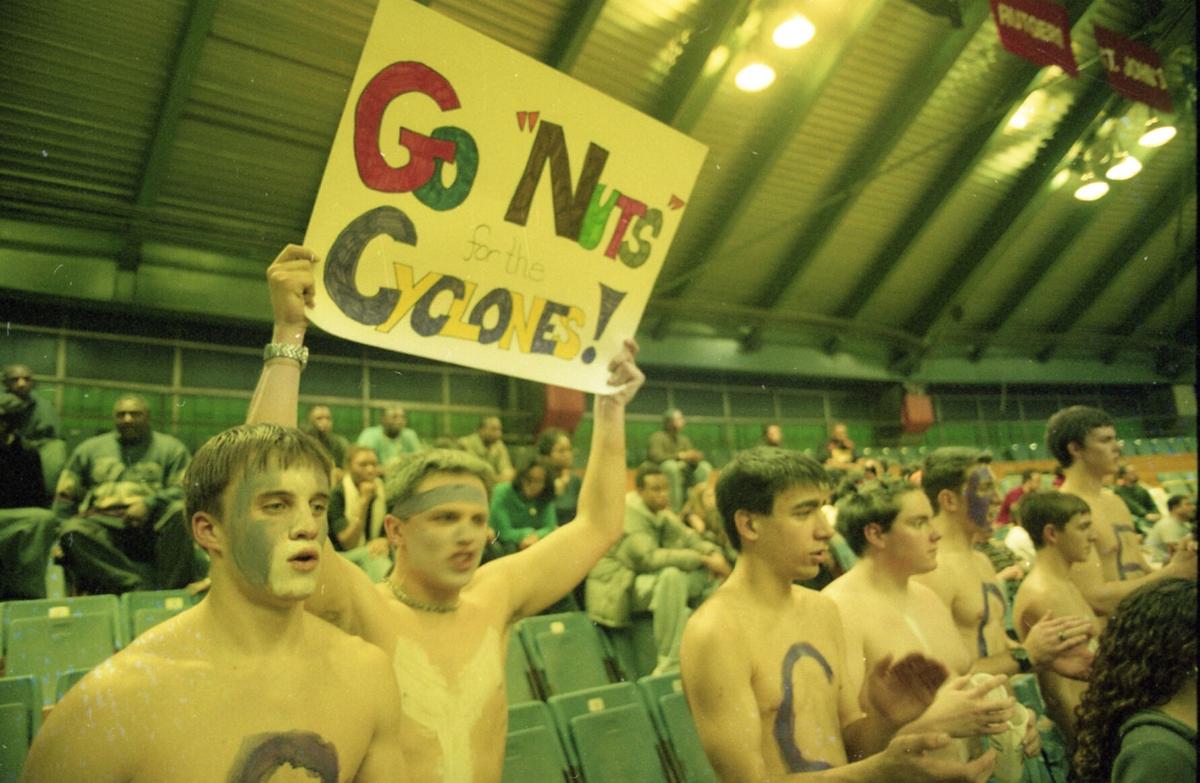 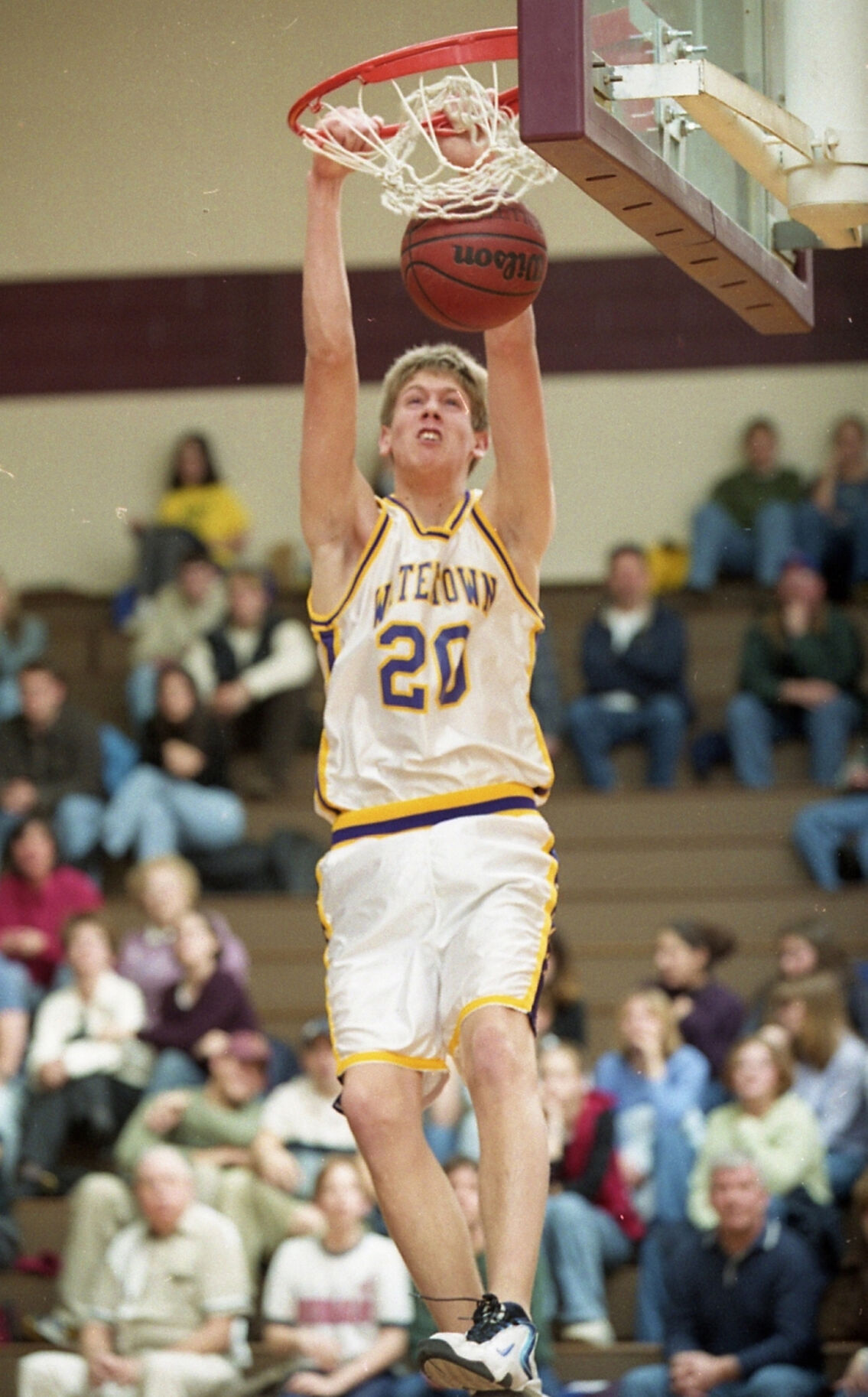 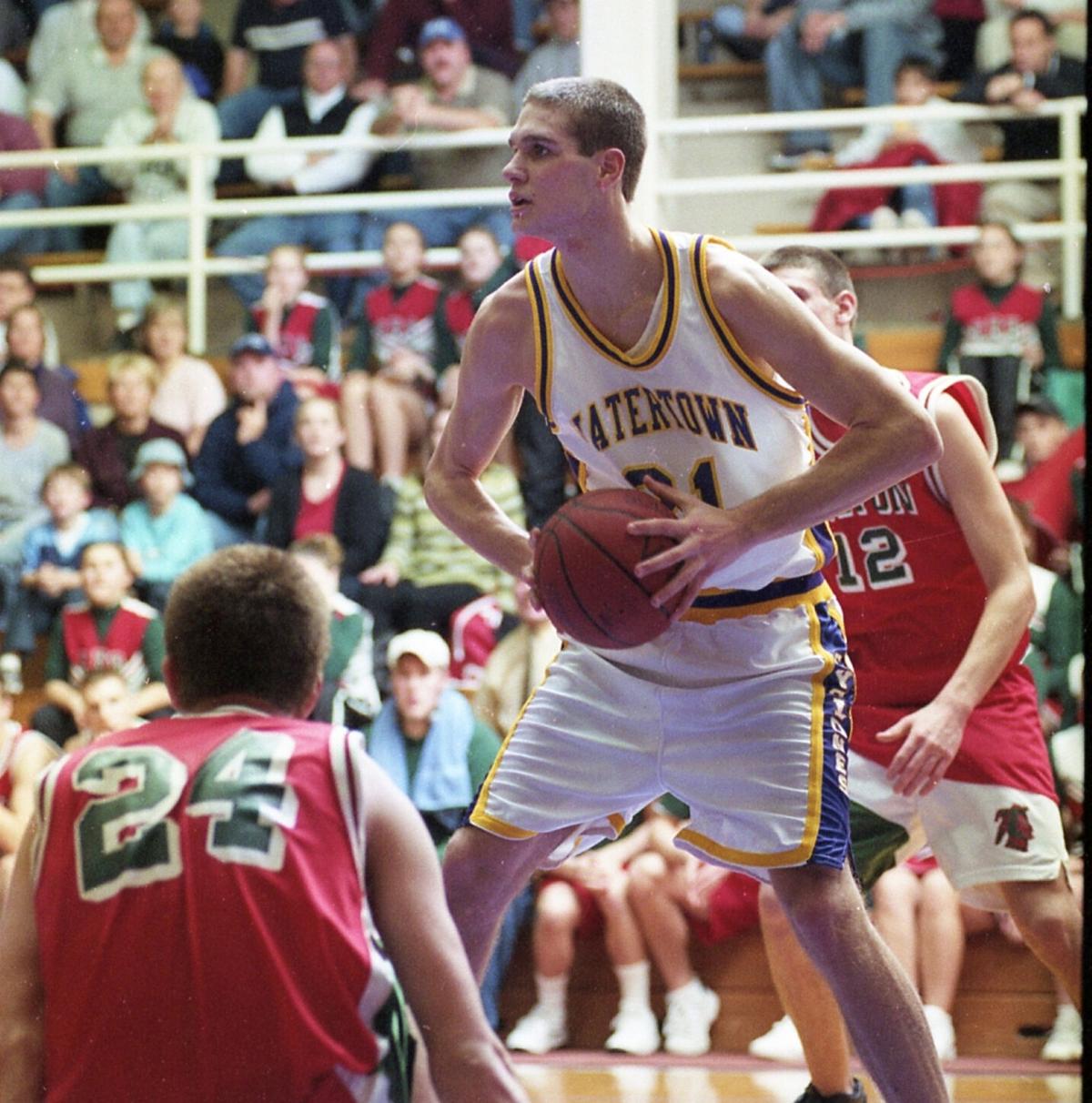 Watertown’s Sid Pond looks to make a pass after pulling down a rebound during a nonleague game Jan. 21, 2001, against Fulton. Watertown Daily Times 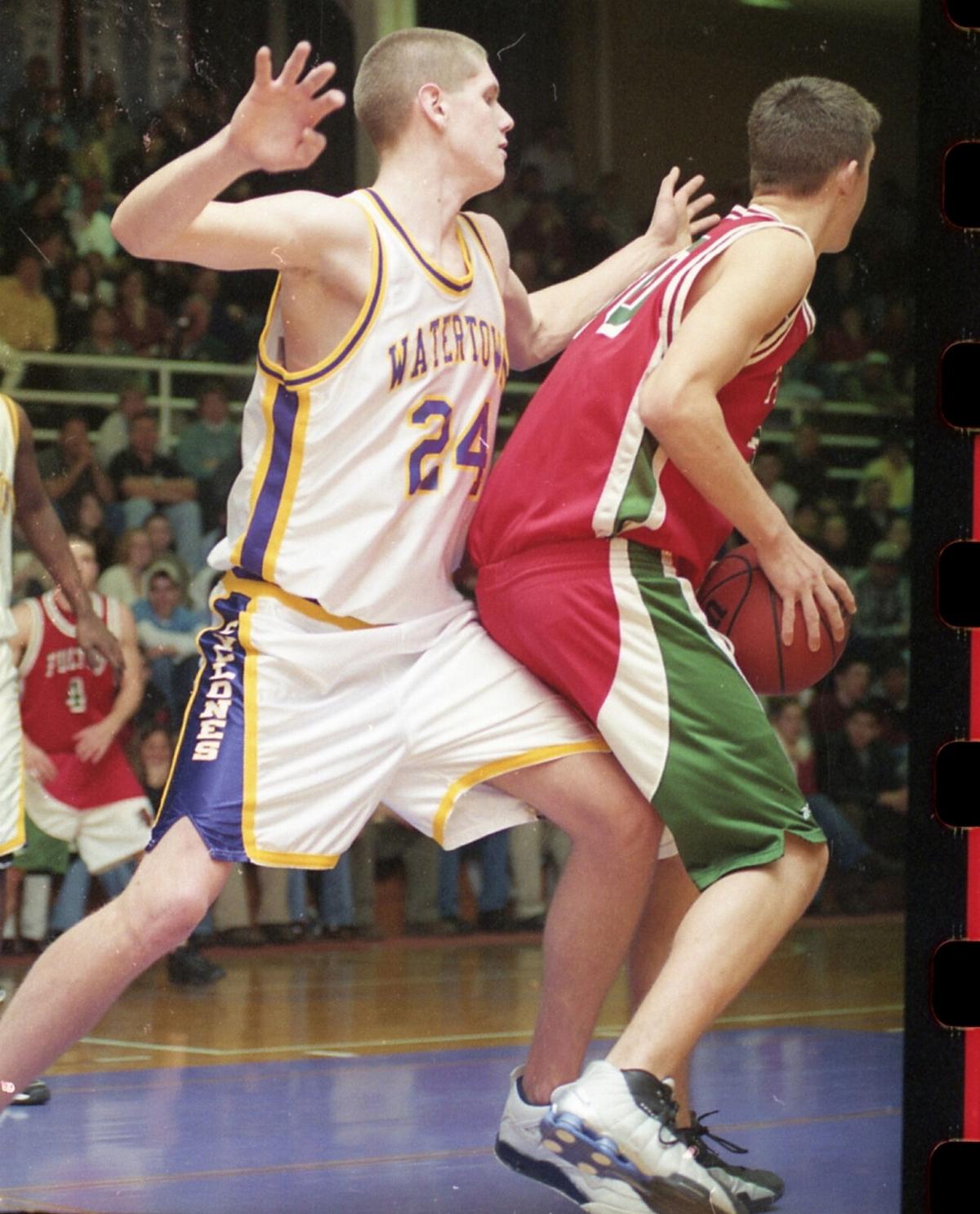 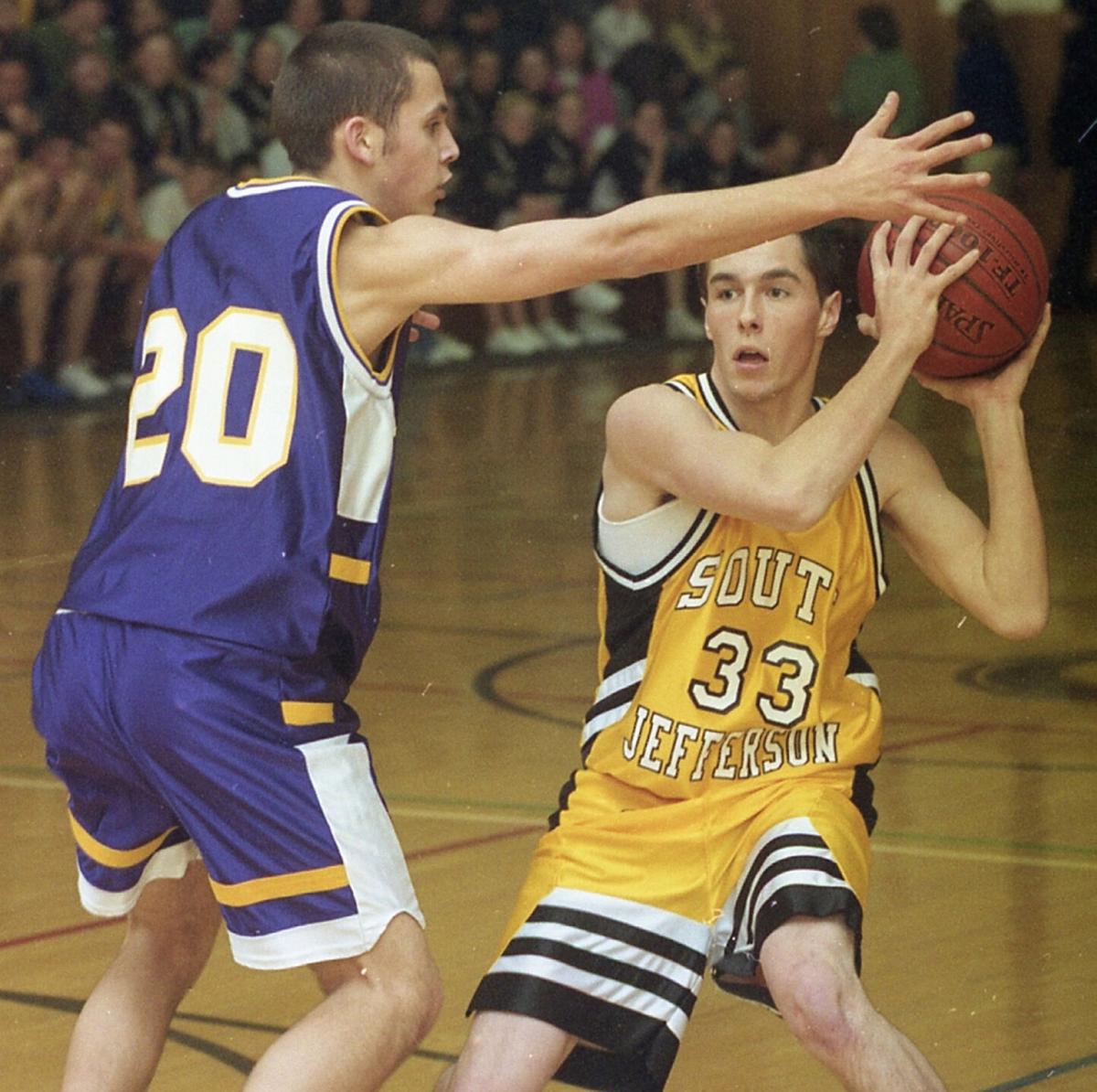 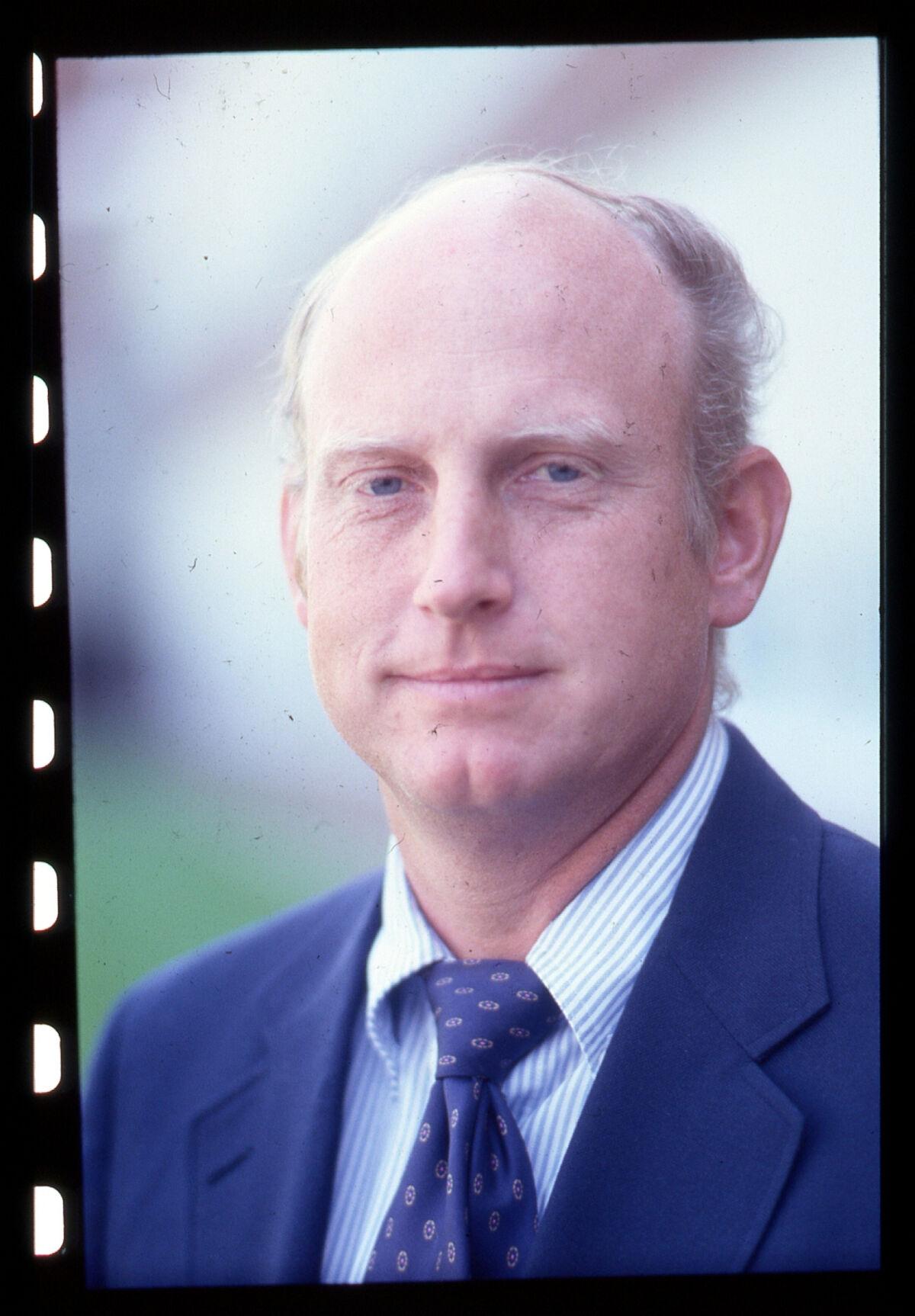 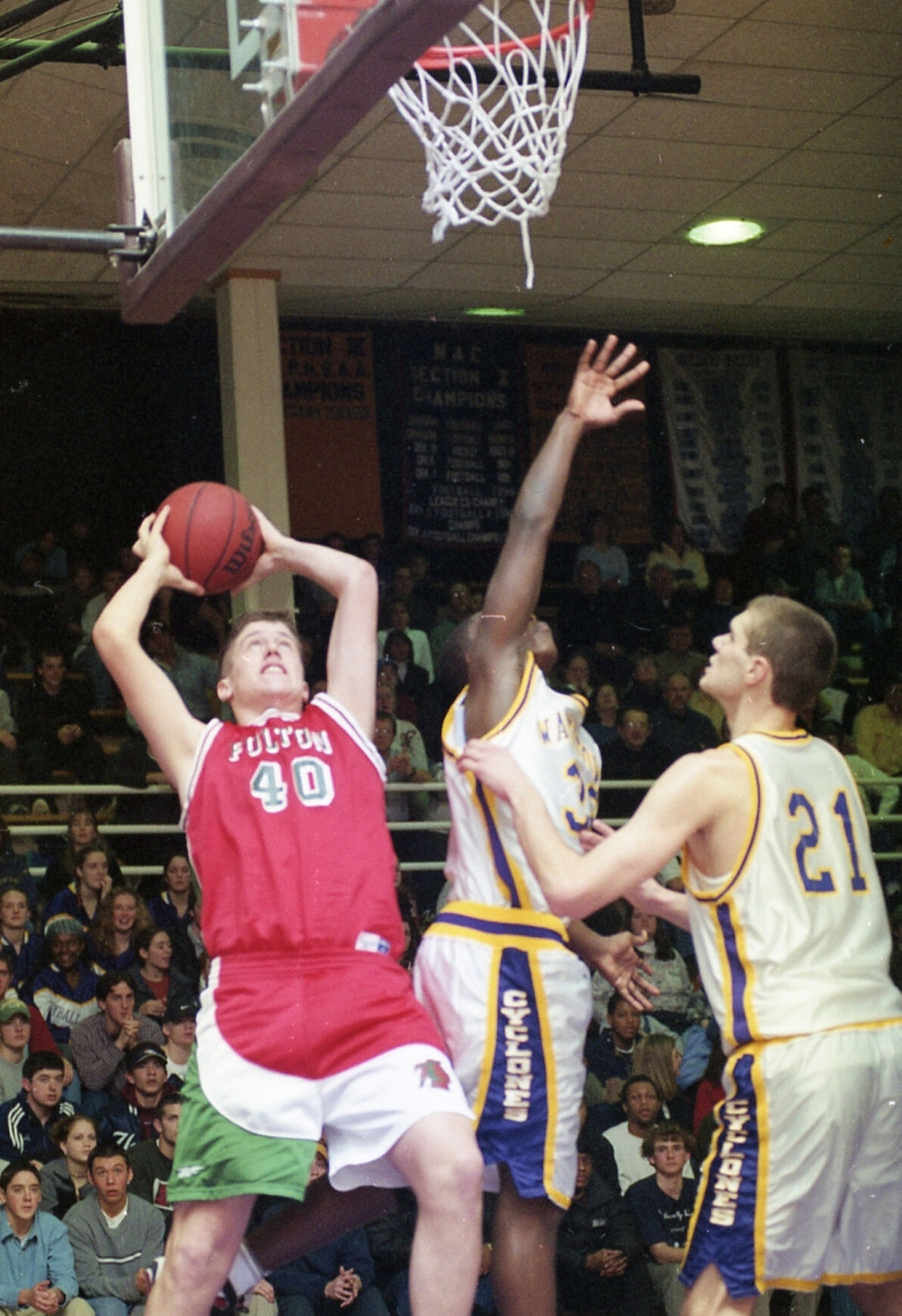 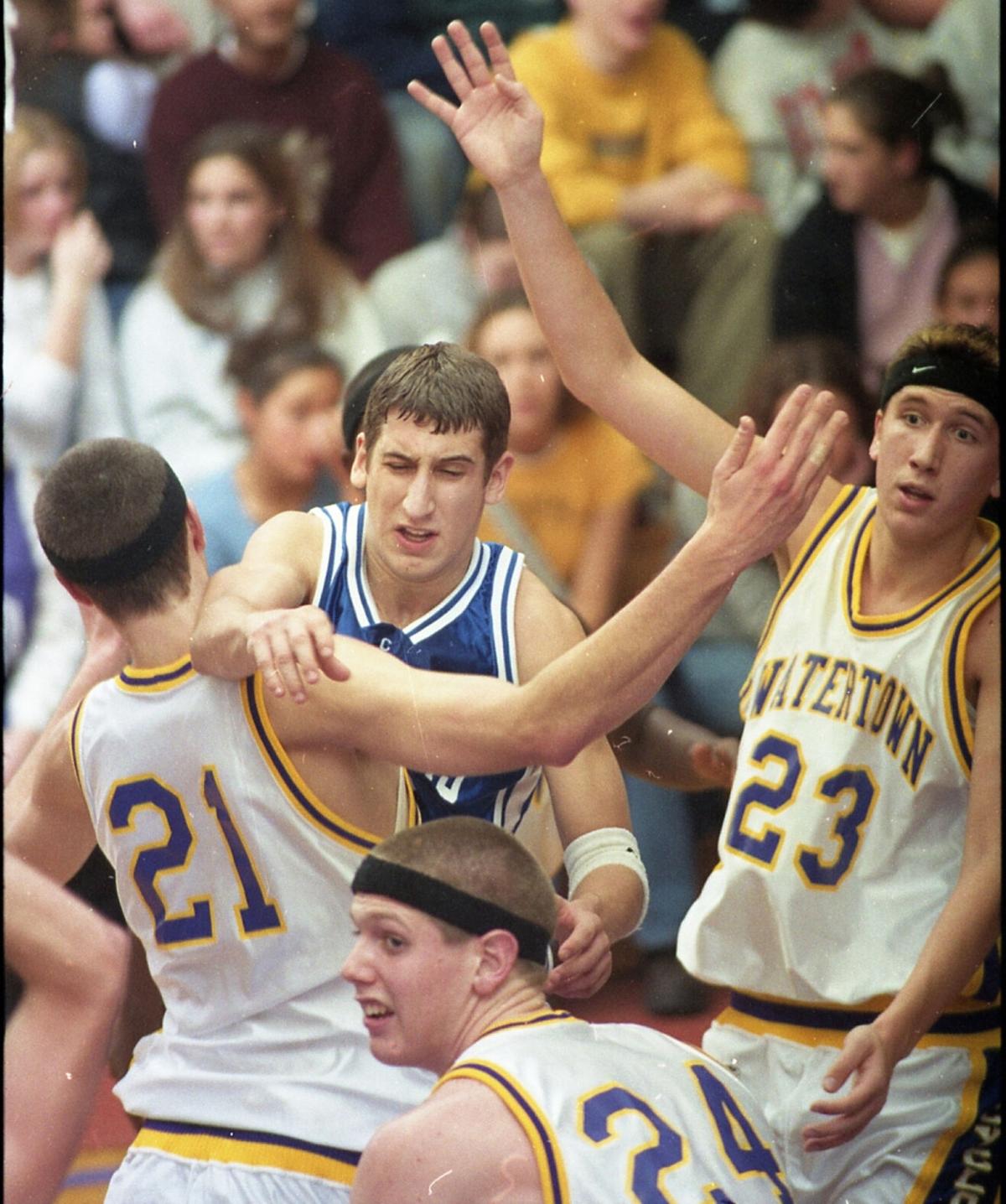 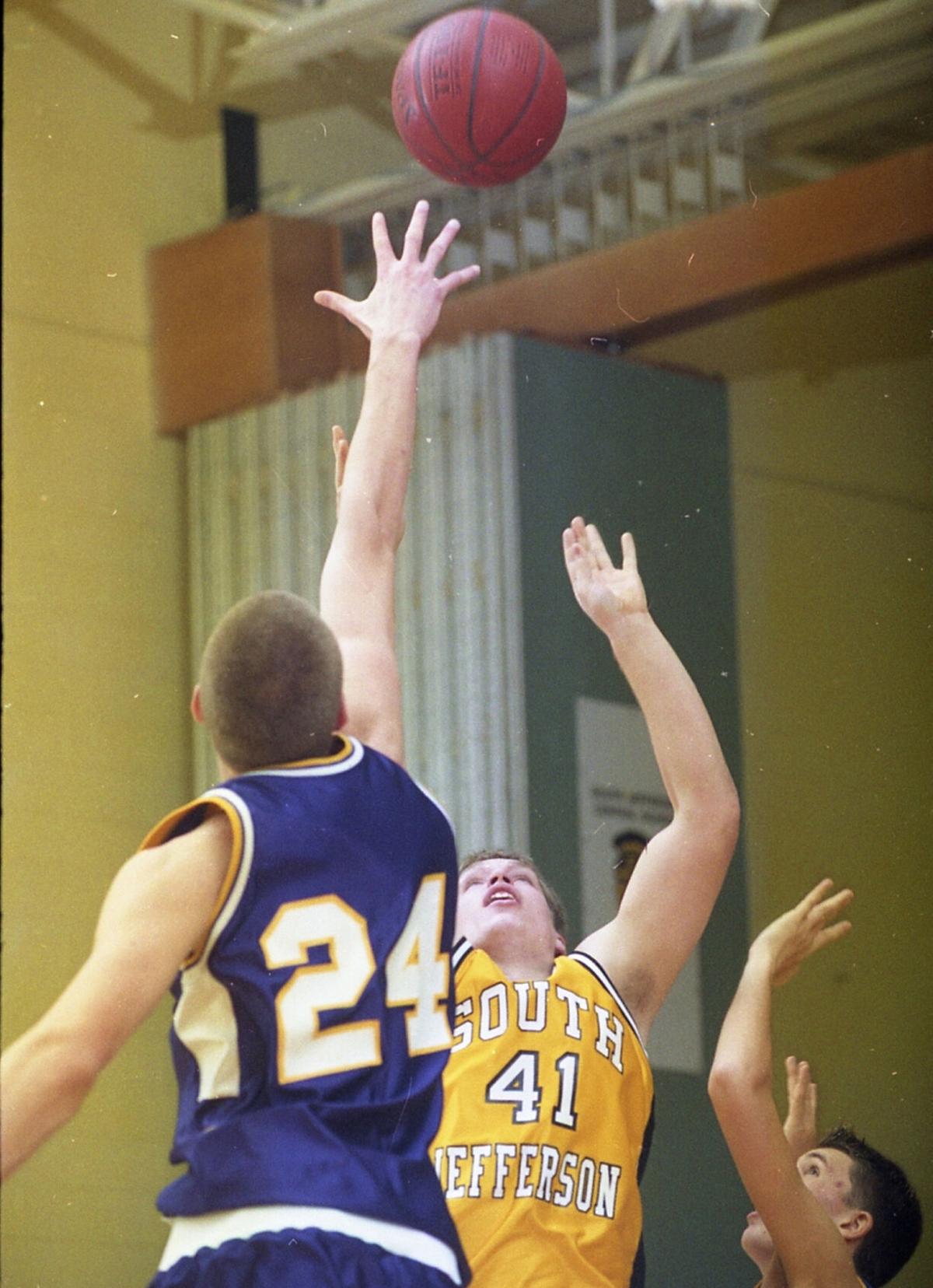 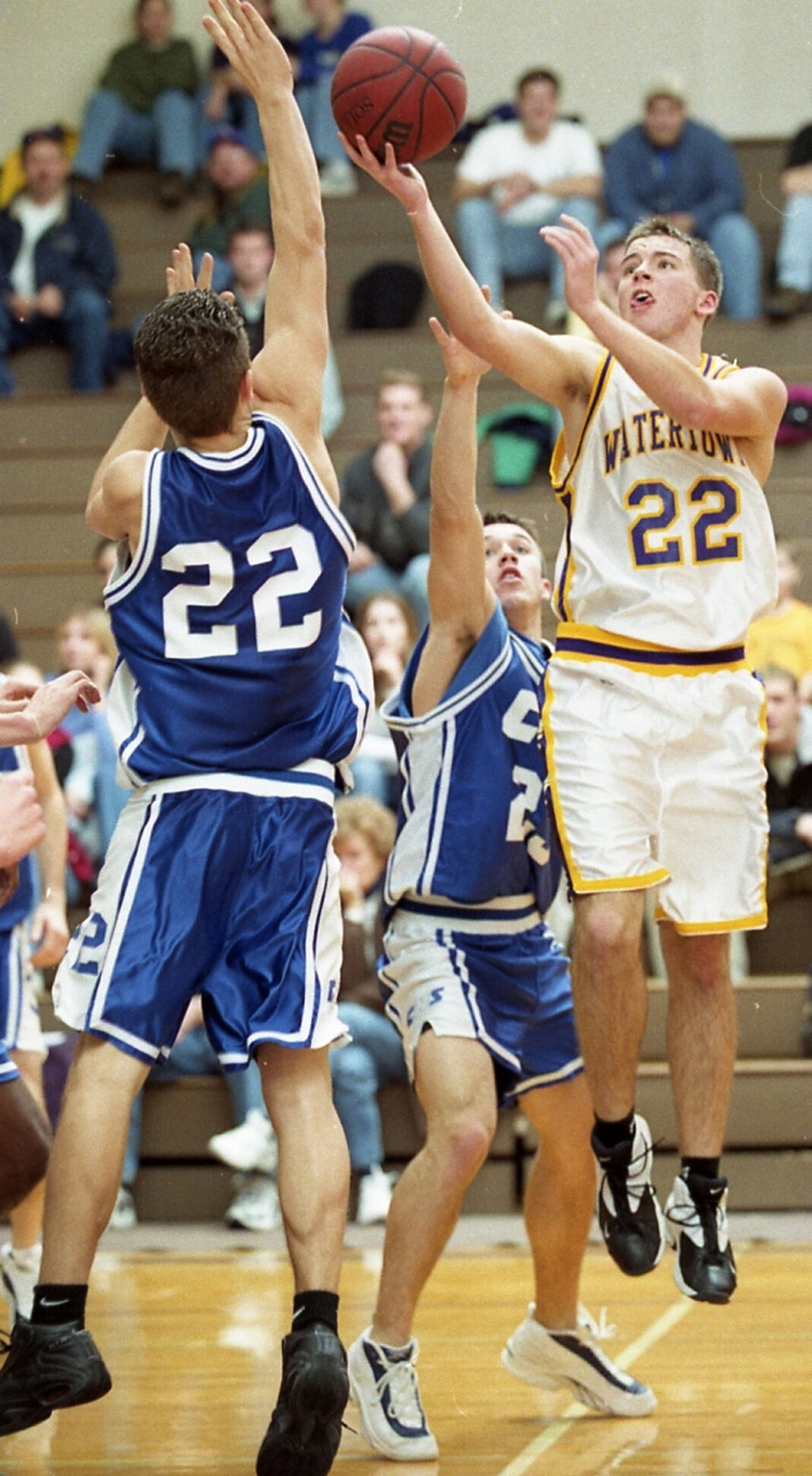 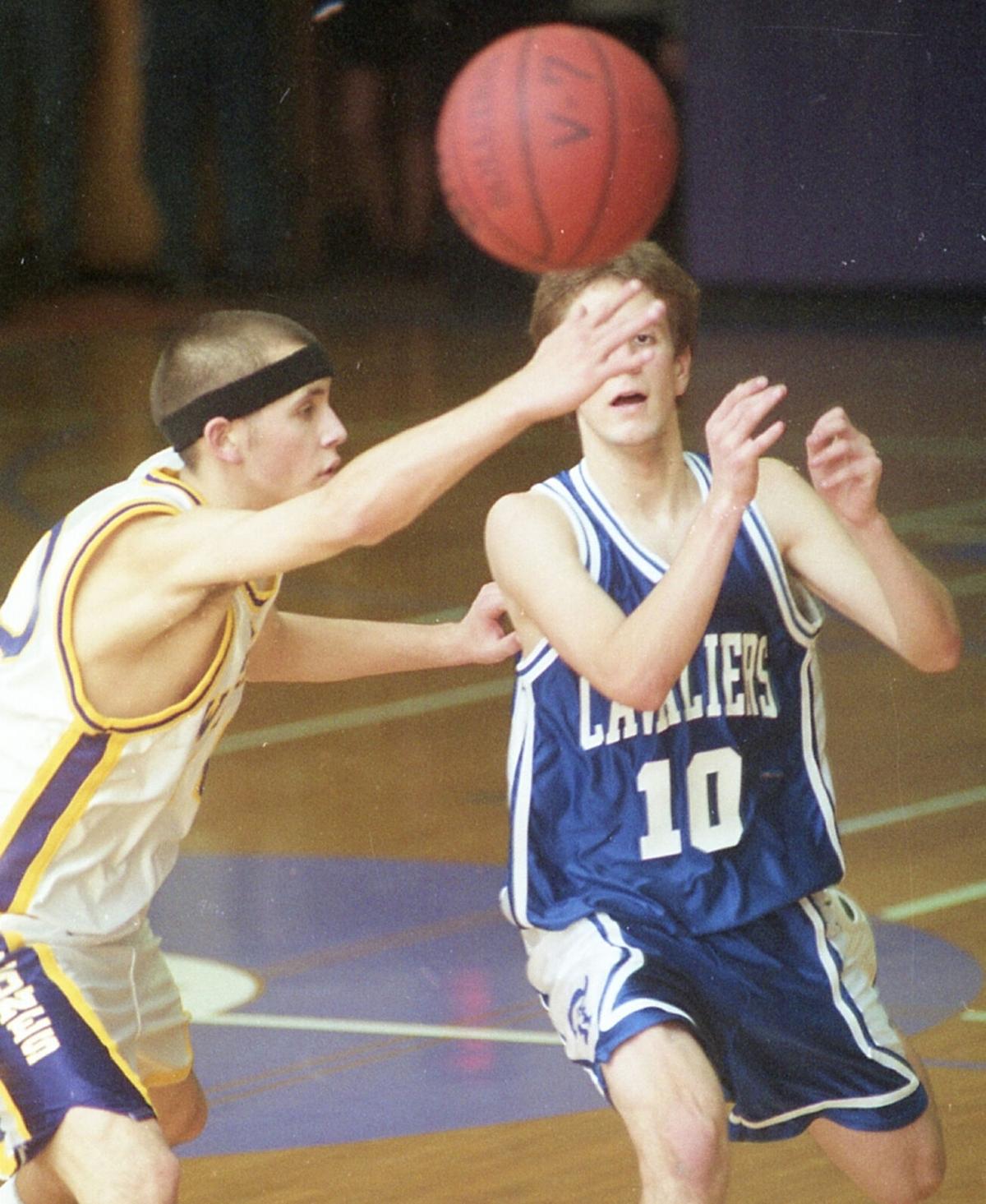 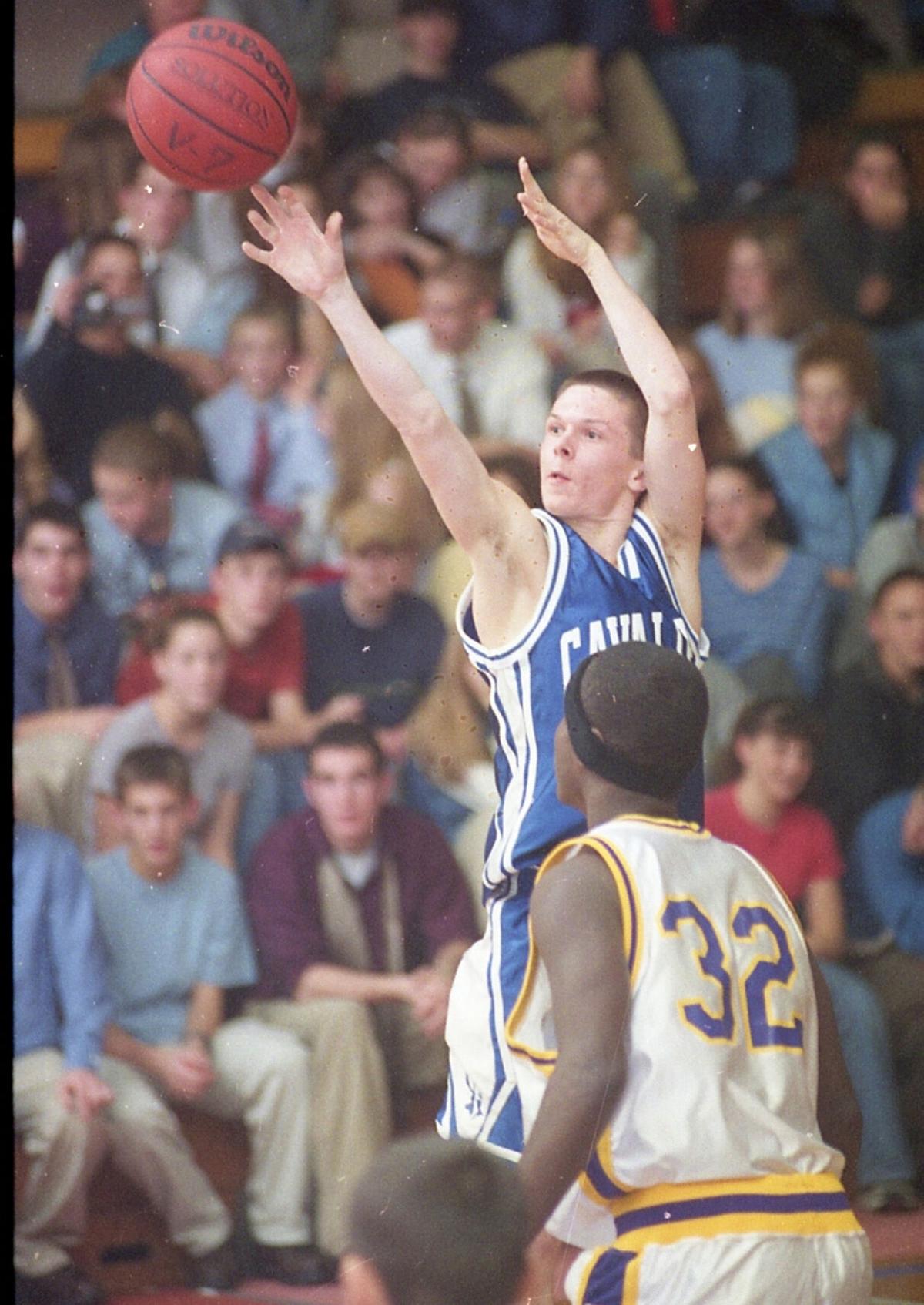 Watertown’s Sid Pond looks to make a pass after pulling down a rebound during a nonleague game Jan. 21, 2001, against Fulton. Watertown Daily Times

WATERTOWN — There are certain north country high school teams that will always be talked about.

The 2000-2001 Watertown boys basketball Section 3 championship team is one of them.

The towering duo of Matt Gorman and Sid Pond has become Watertown legend. Both players, who physically and figuratively stood above the rest, along with a cast of diverse talent, delivered Watertown its first Section 3 championship in more than 50 years, providing the community with one its greatest athletic thrills.

That team will turn 20 years old in November, but what they accomplished is far from a distant memory.

WINNERS IN THE MAKING

When Gorman and Pond got on the floor for the first practice of the 2000-2001 boys basketball season, coach Paul Adams instantly noticed something was different.

Nothing was off, quite the opposite actually. His two mountainous forwards, who spent their summers going from one AAU tournament to another and participating in basketball camps throughout the country, had dramatically improved.

That’s saying something considering the year prior, when they were sophomores, both Pond and Gorman had played significant roles in Watertown’s 19-3 season and run to the Section 3 Class A semifinals.

The Cyclones would be without some key seniors who graduated the June prior, that included Andre Brown who averaged 12.1 points and 10.1 rebounds and was the Times All-North Frontier League MVP. However, they brought back a strong core. Along with Pond and Gorman was Ryan Patenaude, Tom O’Riley, Donate King, Tom Bedard, Todd Garvey, Pat Hopkins, Hal Thurston, Chris Gianetti, Aaron Rivers, Ryan West and Charles Kimball.

Adams was used to having strong teams that competed well in the Frontier League. However, once sectionals arrived, reality often set in. The Syracuse teams ran Class A — this was before Class AA was created in New York State (2004), so schools such as Henninger, Corcoran and Liverpool, which had much larger pools of players to recruit from, had an advantage over schools like Watertown.

Gaining players like Gorman and Pond — whose heights stretched to 6-foot-9 and 6-foot-8, respectively, and possessed natural basketball talent — made Watertown legit contenders.

Adams also had a team that bonded beyond the court. A core group of the players, including Gorman, Pond and Patenaude, grew up playing basketball in Watertown.

The 2000-2001 Watertown Section 3 championship team arguably began being built seven years earlier when most of the team was in the fifth or sixth grade.

“We all did travel teams together, we did tournaments, three-on-three tournaments,” Gorman said. “We went to camps together. So, it was Sid, Ryan Patenaude, Tom O’Riley, Hal Thurston, if you go through the whole roster, we were all at some point connected. Sid Pond for instance, we went to everything together from fifth grade on. That helped out huge.”

Patenaude even remembers watching Gorman drop-step dunk as early as the eighth grade.

“That’s the secret to any team, if your players are getting along, they hang out and they like each other, then that does away with the petty jealousies,” Adams said. “With that team, no matter who was on the floor, they always tried to get the ball to the kid with the best shot.”

For Gorman, the summer of 2000 is when his basketball stock took off. Nearing 7 feet tall, he joined an AAU team run by Mickey Walker and traveled across the country, getting to play basketball against high school talent that drastically trumped anything he would experience in the Frontier League. He even participated in Adidas’ famed ABCD Camp.

“You know, the first thing I noticed was that I wasn’t the tallest guy anymore,” Gorman said. “That was one of the quickest adjustments you had to make right away, and how much faster the guards are. Everything was just upped tenfold, and I needed to see that.”

For as good as Gorman was, he greatly benefited from the talent of his Watertown teammates, particularly Pond.

Pond, almost as tall as Gorman, dominated the boards and, by the time, he graduated Watertown, he was the school’s all-time leader in rebounds — that is until his younger brother, Dustin, broke that record 10 years later.

Following that season, Pond and Gorman were named the Times All-North Frontier League co-MVPs. And while Pond was a tremendous big man with all the skill to dominate the post, he also possessed ball-handling skills that often went overlooked by opponents.

“Sid grew up playing the three (small forward), so he was always a good ball handler,” Gorman said. “Mr. Fundamentals is what we kind of called him ... Teams didn’t realize he could bring the ball up the court when we needed him to. That changed up their whole press and they couldn’t set up their press if he was doing that.”

There was one more major difference that distinguished the 2000-2001 Watertown boys basketball season: opposing coaches weren’t the only ones scouting Gorman.

College coaches from across the country took interest in the 6-foot-9 Gorman.

Patenaude described it as like being in a movie.

“It’s like a buzz, it all started building. The idea that Matt was very quickly becoming a household name, nationally, from how he was getting recruited,” Patenaude said. “I think the Virginia head coach was coming to Watertown high school and that old gym that we used to have. He would just be randomly sitting next to someone’s parents and then talking to Matt after the game.”

Assistant college coaches would often attend Watertown practices. While they were there to see Gorman, it often inspired other members of the Cyclones to work harder. A combination of their talent and drive made practices some of the fiercest competitions Adams watched all season.

“Our toughest games were sometimes our intrasquad scrimmages. Because I had the three best big men in the entire Frontier League,” Adams said. “So, they went at each other in practice, they’d get pushing and shoving and they could all take it and they can all dish it out. I think it made them all better, and when we went against some Syracuse schools that had some bigger kids, they weren’t intimidated.”

Between the chemistry and the pure talent, Adams didn’t have to be too on top his team while they were on court. Gorman and Pond would dominate both the high and low post, freeing up space for Patenaude, O’Riley and King. King especially thrived while playing alongside his larger teammates. The then-sophomore, the youngest of the team, developed into a lethal 3-point threat and often found himself with open looks when opponents would be paying extra attention to Gorman and Pond.

The Cyclones steamrolled their way through the regular season. Other Frontier League teams struggled to come close to matching them and the only Section 3 team to give them a scare was Fulton. After 22 straight wins without suffering a loss, Watertown found itself right where it wanted to be, inside the Manley Field House at Syracuse University with Corcoran on the other side of the floor.

Corcoran, one of the Sections perennial basketball schools, had eliminated Watertown in the sectional semifinals the season prior. Patenaude contends that a blown traveling call that negated a Watertown layup cost them the game.

Fred Page, the Cougars’ all-state guard, was a force, and his quickness often shredded opposing defenses.

In a packed Manley Field House on the SU campus, the Cyclones completed what seemed to be destiny. They dismantled Corcoran, winning, 69-49. Page managed only 11 points while Gorman put up 26.

The game effectively came to a close with a exclamation point.

Afterward, Times reporter John Day wrote: “A Patenaude-to-Gorman alley-oop pass and dunk brought the huge Watertown throng to its feet, signifying that the sectional torch had been passed to the Cyclones.”

WHERE THEY ARE NOW

Twenty years later and the 2000-2001 Watertown Section 3 Class A title team is still only one of two Watertown boys hoops teams to win a sectional title.

Gorman, sitting inside his office at Jefferson Community College with his framed No. 24 Syracuse jersey hanging on the wall behind him, began to recall more and more details of that Watertown season the longer he talked about it.

Basketball is still part of his life, for the past seven years he’s served as an assistant coach for the JCC men’s basketball team. His full-time job, though, is as resident director at JCC.

“I didn’t have much experience working with younger aged teenagers and young adults up until I worked at the Children’s Home (of Jefferson County),” Gorman, who majored in social work at SU, said. “I’ve always liked working with people, I just have sort of a passion for wanting to help people get on the right track.”

Pond also continued his basketball career at the collegiate level. He played four years at Division II Le Moyne, where he scored a total of 733 points and hauled in 606 rebounds.

Both Gorman and Pond had the opportunity to team up one more time a few years ago when they were placed on the same team for an alumni game.

“I don’t know why they placed us on the same team,” Gorman said. “Whoever did that was kind of stacking the deck. We just did high, lows the whole time.”

Adams stopped coaching Watertown after the 2001-2002 season and retired from his post as athletic director in 2007 after 18 years. Now, the father of three and grandfather of five, watches his son follow his path. Jay Adams has coached the Central Square boys basketball team for the past 19 years.

“I go down and watch a lot of his games and he makes me very proud of him, he does a fantastic job,” Adams said of his son, Jay.

Patenaude, who comes from a family of educators, has done his part to help educate children in America. He currently resides in Salem, Mass., with his wife and 3-year-old son, where he serves as the Senior Vice President and Co-Founder of FEV Tutor, an educational technology company that partners with about 700 district and charter schools to provide live online tutoring for the at-risk and special student population.

“My mom was a teacher in Watertown City schools for her whole career, she had like different roles there, she works for Jefferson-Lewis BOCES right now, and my sister is a high school math teacher at Rochester City schools, and my grandmother was a science teacher, when she was with us, at Copenhagen Central Schools,” Patenaude said.

“I really think that the Watertown education community sort of like gave me a passion for trying to affect change in education.”

Gorman still makes his way out to Watertown games, watching for the next generation of Cyclones’ legends.