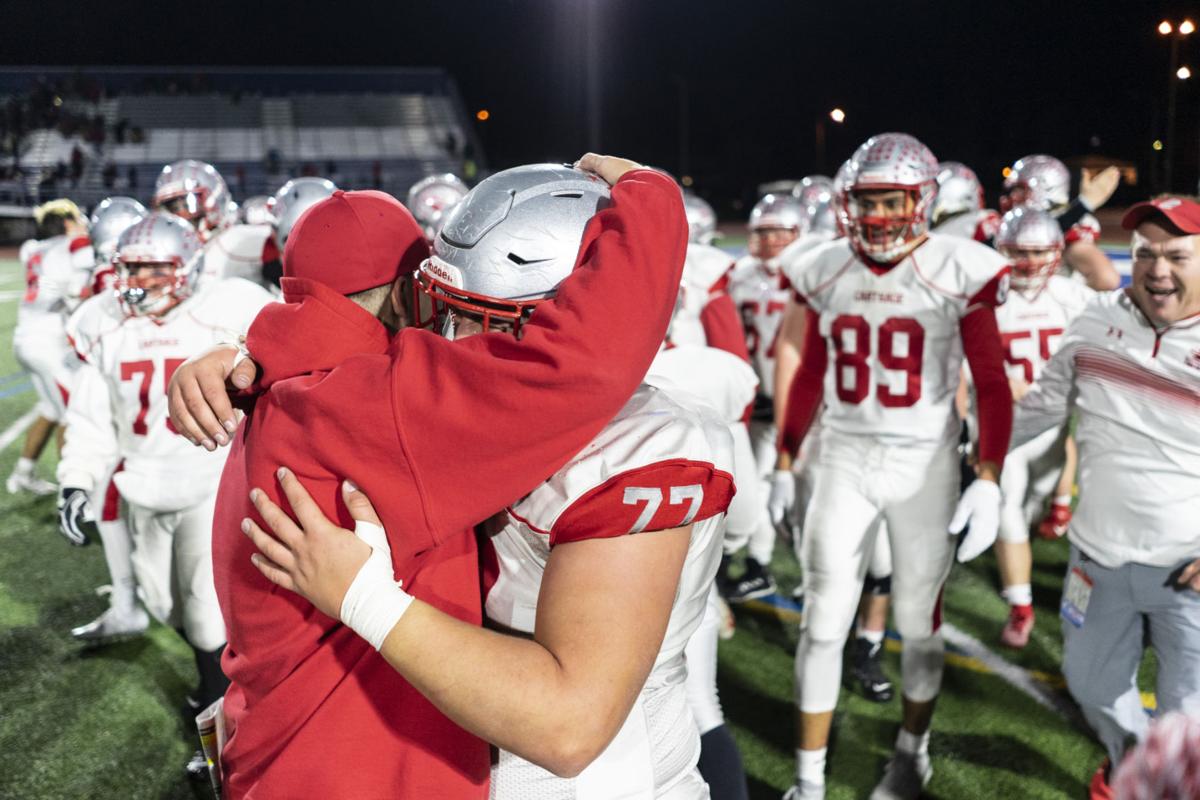 Collin Null is hugged by a member of the Carthage coaching staff after their 16-6 victory Friday night in Cicero. Julia Hopkins/Watertown Daily Times 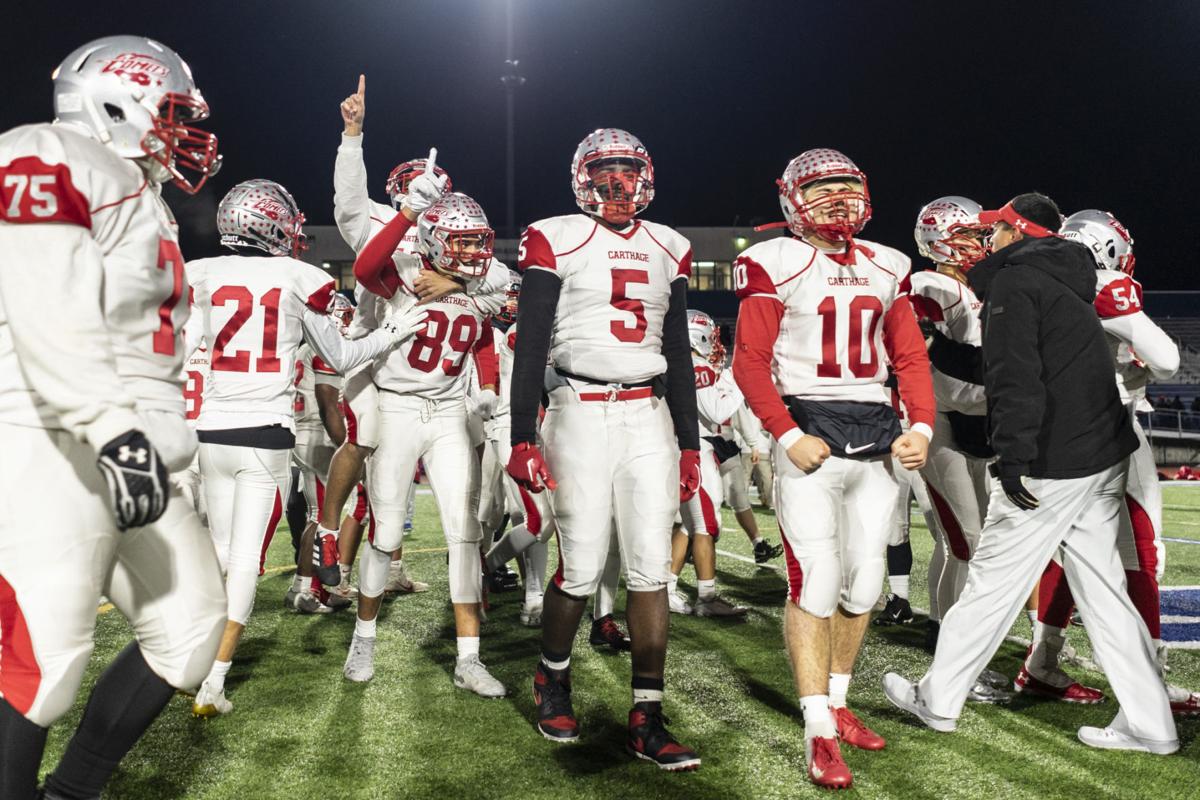 The Comets celebrate after their 16-6 victory over Canandaigua on Friday night in Cicero. Julia Hopkins/Watertown Daily Times 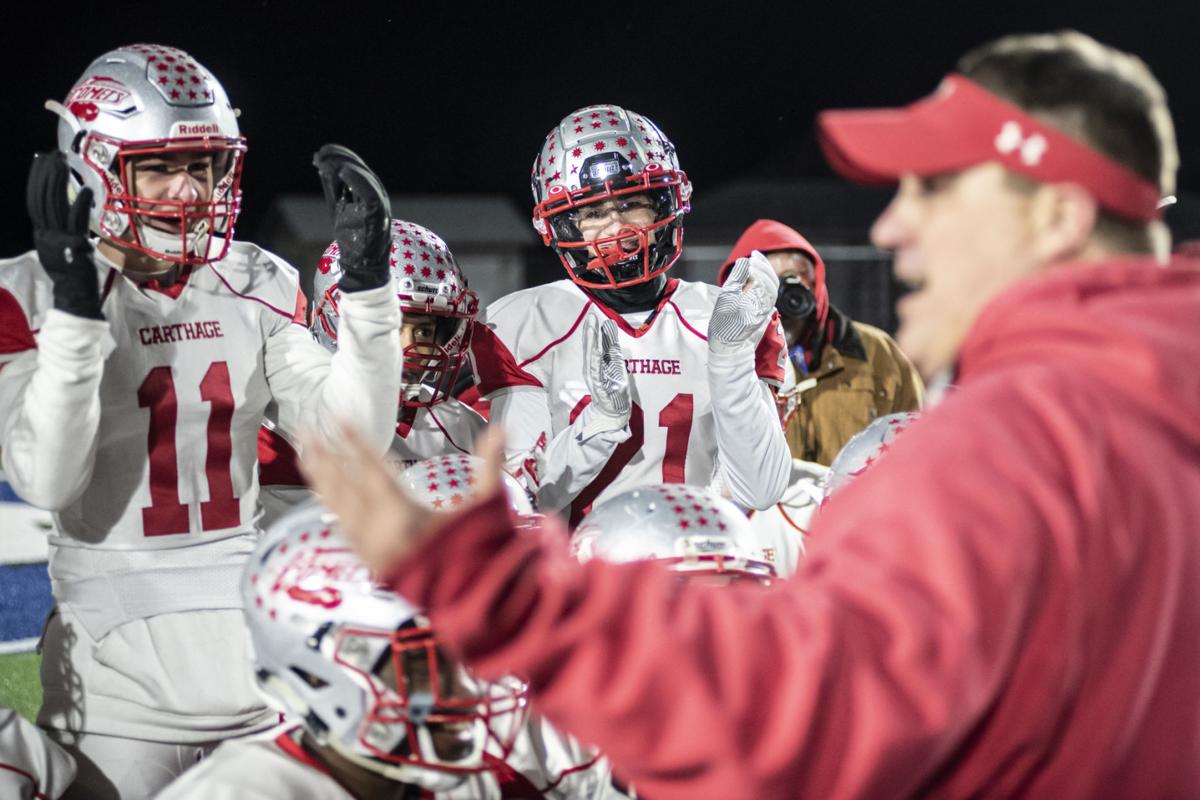 Collin Null is hugged by a member of the Carthage coaching staff after their 16-6 victory Friday night in Cicero. Julia Hopkins/Watertown Daily Times

The Comets celebrate after their 16-6 victory over Canandaigua on Friday night in Cicero. Julia Hopkins/Watertown Daily Times

For Carthage, the bus ride to the Carrier Dome on Friday will be historic. It will be the first time that the school has made the trip to Syracuse to play in a state title game, making the 2019 Comets only the third Frontier League team to do so.

For Cornwall, the bus ride from New Windsor to the Carrier Dome will feel like déjà vu. Twelve months ago, the Dragons were in this exact same situation, only instead of playing Carthage, they played West Seneca East of Section 6.

Cornwall won that game, 21-14, and captured its first Class A state title. It was only the 12th win in what has become a 23-game winning streak for Section 9 school.

However, the Dragons (11-0) have a slightly different look than they did year ago. At the top is first year head coach Ryan Baldock. In February, Baldock came over from Monroe-Woodbury where he spent three seasons. He took over for Eric Holzapple, who remained on as an assistant coach at Cornwall.

In terms of players, after star sophomore quarterback Aidan Semo went down in October with a broken collarbone, Cornwall was forced to use senior receiver Louis Francese in the role. The 6-foot-2, 195-pound senior will be sporting No. 13 on Friday and has been an effective quarterback for the Dragons. In seven games since becoming the starting QB (plus one appearance in September) Francese has completed 54 of his 87 passes for a .620 completion percentage, and has recorded 1,018 passing yards and 12 passing touchdowns.

Semo is currently day-to-day and was practicing with the team on Monday after missing six weeks. The loss of Semo could have completely derailed Cornwall’s season, but instead the Dragons won their ninth straight Section 9 title.

Prior to becoming quarterback, Francese was one of Semo’s primary receivers, he currently has 24 catches and 486 receiving yards. Since taking over quarterback, senior Mike Alfieri has become the Dragons’ top receiving threat. At 5-10 and 160, Alfieri, wearing No. 1, has made 25 catches for 506 receiving yards and nine receiving touchdowns (not including his performance during last week’s game versus Rye).

While much of Cornwall’s success can be credited to its talented offense, the Dragons still boast a strong defense, particularly at linebacker. The duo of senior Jay Channell and junior Chris Rose have terrified anyone who has tried to challenge the Dragons up the middle. Channell, wearing No. 4, has a team leading 74 tackles. Rose, wearing No. 21, has a total of 53 tackles and makes Cornwall’s line calls.

In a Times Herald-Record story from Nov. 20, Channell was considered Cornwall’s hardest hitter.

HOW CORNWALL HAS FARED IN THE STATE TOURNAMENT

After narrowly defeating Section 2 champion Queensbury, 28-27, in the regional round, Cornwall had a more comfortable win last week when it defeated Section 1 champion Rye, 45-34. Despite the 11-point margin and the Dragons never relinquishing the lead, Rye gave Cornwall a run toward the end of the first half, cutting the deficit to 28-20 at half.

Woods finished with 163 rushing yards in the game and three touchdowns to earn the offensive MVP.

Cornwall almost never got to the semifinals though. Queensbury would have tied up its game against Cornwall at 28-28 had it not been for a blocked PAT kick by the Dragons with five minutes left in the game. Cornwall again had a solid game from Woods, he finished with 160 rushing yards and four touchdowns. In the state tournament, Cornwall is outscoring opponents, 73-61.