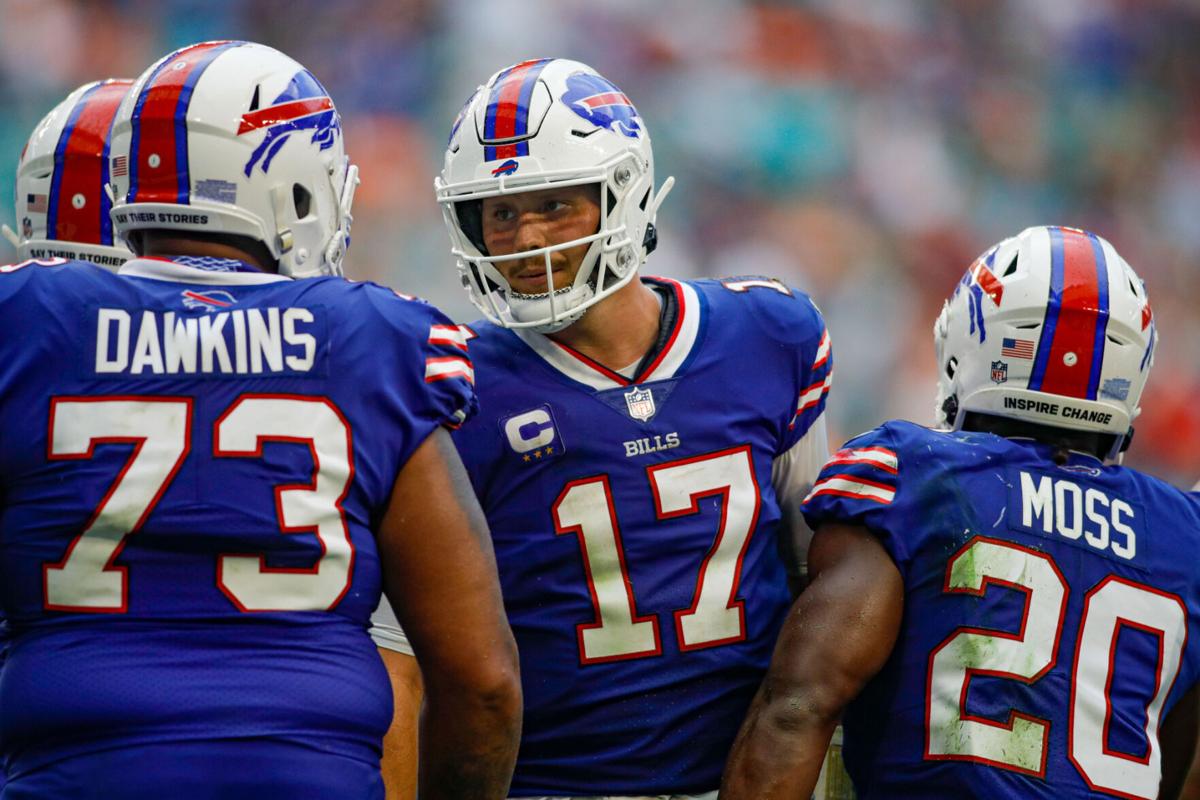 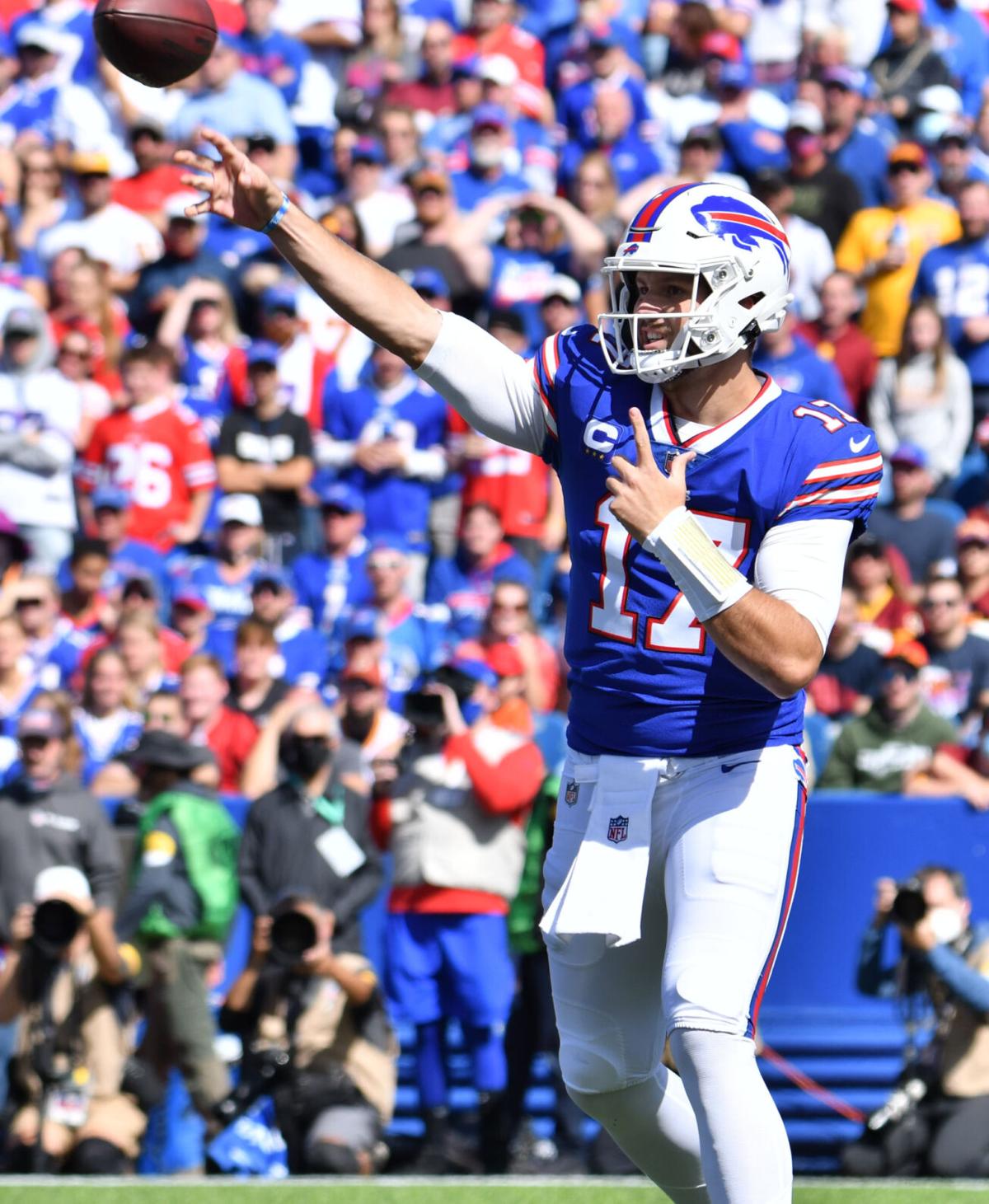 ORCHARD PARK — On Tuesday, Bills quarterback Josh Allen received AFC Player of the Week honors for the seventh time in his four-year career after leading the Bills to a 43-21 Week 3 thrashing of the Washington Football Team.

For Allen, it was the fifth time in his past 19 games that he had been honored with the award, and he now trails only Jim Kelly (10) for the most POW honors in franchise history. Last season, Allen earned the award on four occasions, setting a single-season team record.

But even with the recent accolade, Allen’s focus remains undivided as he and the Bills look ahead to a matchup with the Houston Texans (1-2), with whom Allen has some history. It was just two seasons ago when the Bills QB was seen near the tail end of the ESPN broadcast of the 2019-’20 AFC wild-card game, sitting despondently on the sideline following an overtime loss to Houston in his first playoff game. Buffalo held a 13-0 halftime lead over the Texans only to falter down the stretch and eventually fall in overtime, 22-19. In that game, Allen gave Buffalo a chance to win but failed to throw a touchdown pass.

“No one likes losing, and no one likes losing in the playoffs — especially with the lead that we had,” Allen said of the playoff loss to Houston. “It wasn’t a fun ride home, and it was a long offseason. ... Because it was so long in between games, it really drove me.”

With the struggles he endured along with the successes he found throughout that game, Allen says he used those experiences as motivation to better prepare himself, which helped lead to the successful run that Buffalo enjoyed last season.

“Just the knowledge and experience I gained from that and things that I took away from that game,” Allen said. “Just the attention to detail I started to put into offseason work and mechanics and being a student of the game.”

Since the Bills’ playoff loss to the Texans, each team’s story, along with Allen’s, has been wholly rewritten. Buffalo is trending steeply upward while Houston has since changed coaches, dealt with off-the-field drama and is plunging deeper into the depths of despair by the day.

Regardless of either team’s status, Allen remains locked in on the Bills’ upcoming opponent — a team that handed him the first playoff defeat of his career.

“I know all the pre-conceived notions that they had (surrounding them) coming into this season,” Allen said. “They are a team. I’ll tell you what — they play extremely hard. They’ve got some really talented players on defense, and they do a really good job of taking the ball away.”

While the Texans have recorded five takeaways that ties them for the seventh-most in the NFL, Houston has allowed two 300-yard passers in three weeks — Jacksonville rookie QB Trevor Lawrence (334) in Week 1 and Carolina QB Sam Darnold (304) in Week 3. In Week 2, Cleveland Browns QB Baker Mayfield completed 19-of-21 passes in a win.

Though Allen may be high on the Texans, the numbers don’t exactly back up the praise he’s heaped upon the Houston defense. With that said, the phrase “any given Sunday” rings true to the Bills quarterback.

“It’s a week-to-week league, and this is a team that is going to win a lot of games, and we need to be extremely prepared for them,” Allen said. “We need to put our best foot forward and prepare a game plan and go out there and execute the best that we can.”

A significant factor in his otherworldly respect for the two-loss Texans likely stems from Allen’s relationship with Houston head coach David Culley, who served as the Bills quarterbacks coach during Allen’s rookie season.

Allen struggled during his rookie season after being thrust into the starting role following failed starter Nathan Peterman’s rapid downward spiral. The now-franchise QB finished the ’18 season with a 5-6 record and a 52% completion rate, but Allen believes the fundamentals instilled in part by Culley helped set the stage for what has been a rapid transformation.

Despite Allen’s high praise for Culley and the Texans, this matchup doesn’t appear winnable for the Bills’ former QB coach. If last week’s performance against the WFT was any sign of things to come, Allen should be in for another monster performance as the Bills go up against a Houston pass defense that has been prone to allowing big plays through the air this season. Houston has allowed three passing TDs of over 20 yards this season (22, 33, 41) and has allowed the ninth-highest net yards gained per attempt (7.2) to opposing quarterbacks.

Last week, Allen hit a deep ball for the first time this season, connecting with wide receiver Emmanuel Sanders for a 41-yard bomb. The duo had previously missed a few deep opportunities in the weeks prior. Allen also connected with Sanders on a 28-yard touchdown pass earlier in the game, finishing with an average of 8.33 yards gained per attempt.