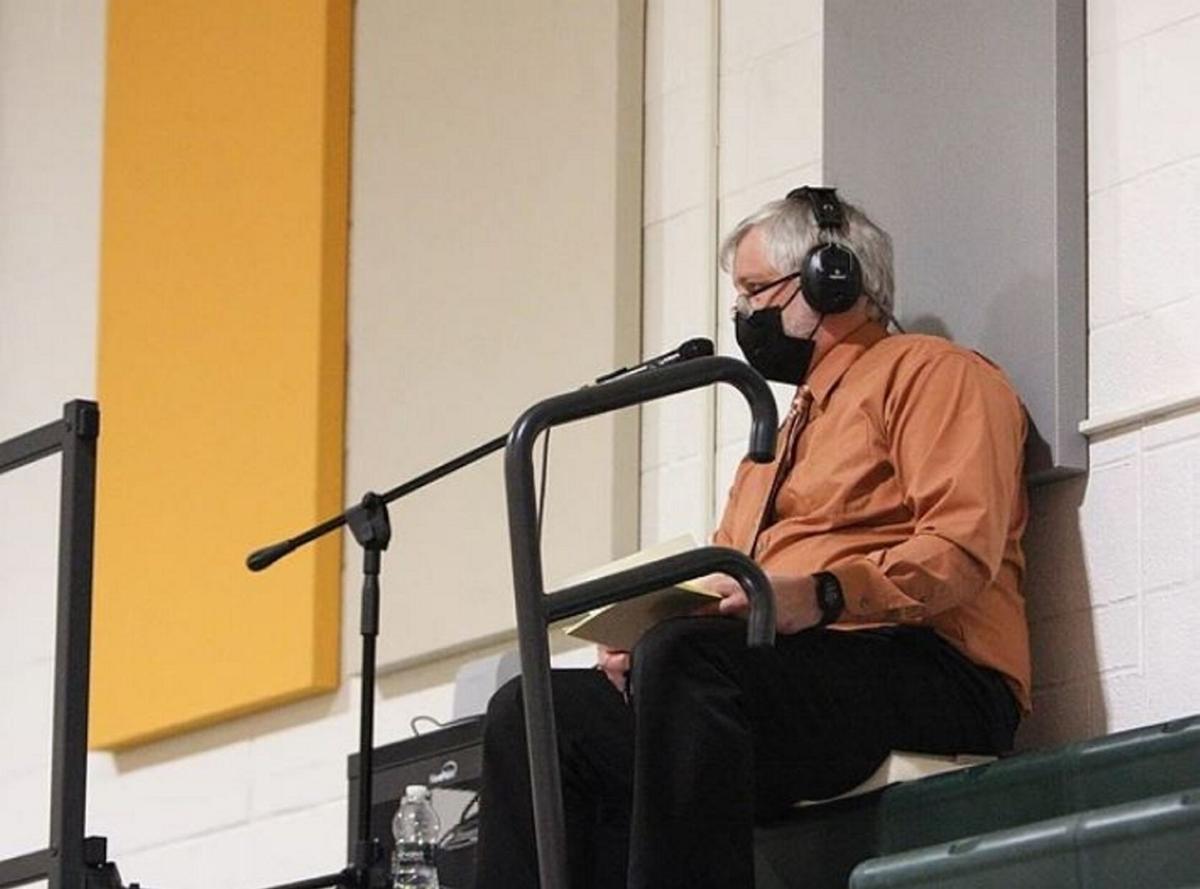 Hermon-DeKalb Superintendent of Schools Mark White sits on the top row of the bleachers in the newly refurbished school gymnasium to provide play-by-play commentary of the school’s basketball teams. Submitted photo 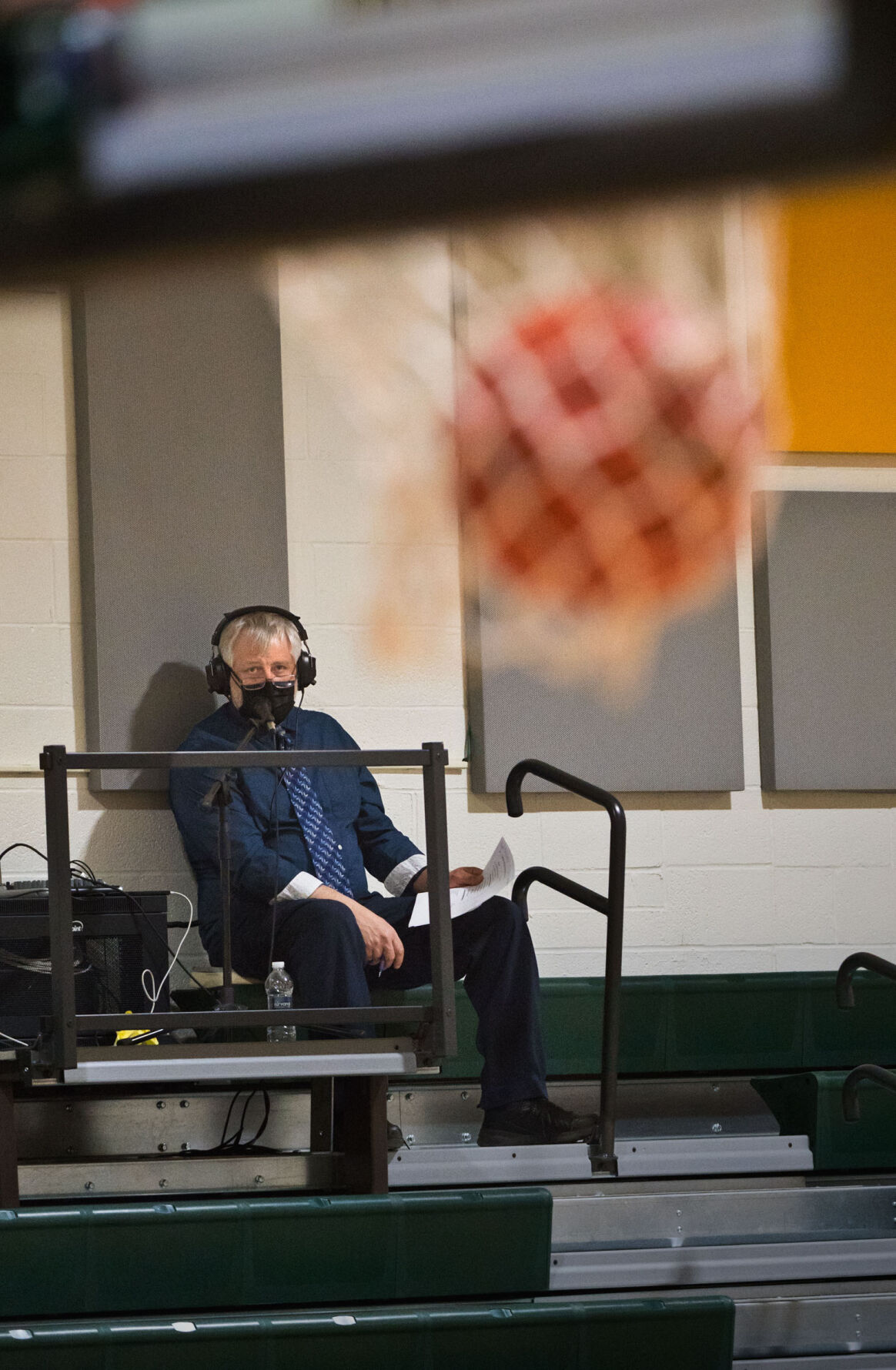 Hermon-DeKalb Superintendent of Schools Mark White sits on the top row of the bleachers in the newly refurbished school gymnasium to provide play-by-play commentary of the school’s basketball teams. Christopher Lenney/Watertown Daily Times

Hermon-DeKalb Superintendent of Schools Mark White sits on the top row of the bleachers in the newly refurbished school gymnasium to provide play-by-play commentary of the school’s basketball teams. Submitted photo

Hermon-DeKalb Superintendent of Schools Mark White sits on the top row of the bleachers in the newly refurbished school gymnasium to provide play-by-play commentary of the school’s basketball teams. Christopher Lenney/Watertown Daily Times

DEKALB — Parents and fans who have logged on to the broadcasts of Hermon-DeKalb basketball games this season have been treated to play-by-play commentary by the school’s superintendent.

Hermon-DeKalb Central School District Superintendent Mark White knew he had to do something when he found out there would be no spectators at basketball games during this year’s shortened season.

After looking at using Facebook Live and YouTube, the school decided to go with the NHFS Network, which is widely used in Section 10. NHFS, Mr. White said, installs automated Pixellot cameras, which offer hands-free video production of sporting events.

“Just before the first game, I asked what does (the microphones) pick up and they said squeaky sneakers, and I said, ‘Well, that sounds boring,’” Mr. White said.

Before coming to Hermon-Dekalb, Mr. White was a science teacher at Harrisville Central School where he also served as girls basketball coach for 10 years.

“I really enjoy basketball and when I asked if I could do play-by-play, (the camera installers) said yeah,” Mr. White said.

Basketball, especially in the small communities that make up Section 10, is a community event, Mr. White said.

“It is a tough, tough year for parents who realized they were not going to see their kids play,” he said. “So this is the next best thing.”

Viewers need to subscribe to the NHFS Network, which costs about $11 per month. A subscription includes every game in the network, which is used in thousands of high schools and colleges across the country.

The school needs to pay for the cameras, but they will be also be used for other sports, including baseball, softball and other events this spring, Mr. White said.

“We actually will be using it for graduation,” Mr. White added.

The graduation broadcast can be viewed without a subscription, he said.

Even with his basketball experience, play-by-play did not come easy to the superintendent.

“The first time out was kind of robotic,” he said of his delivery.

He says he’s also learned some lessons along the way.

“They say that silence is golden and every time there is a stoppage in play, you don’t need to fill all the silence,” Mr. White said.

The broadcasts have been well received, he said, going by comments he’s received and Facebook posts. Mr. White said he’s been hearing from Hermon-DeKalb alumni and even from his former players in Harrisville.

Still, the biggest disappointment of the season might be that the school’s gym has been renovated to a seating capacity of 600, up from 300 before the renovation, and now, besides the players, there is only a skeleton crew on hand to see the action first-hand.

“This is how the north country gets through the winter,” he said.