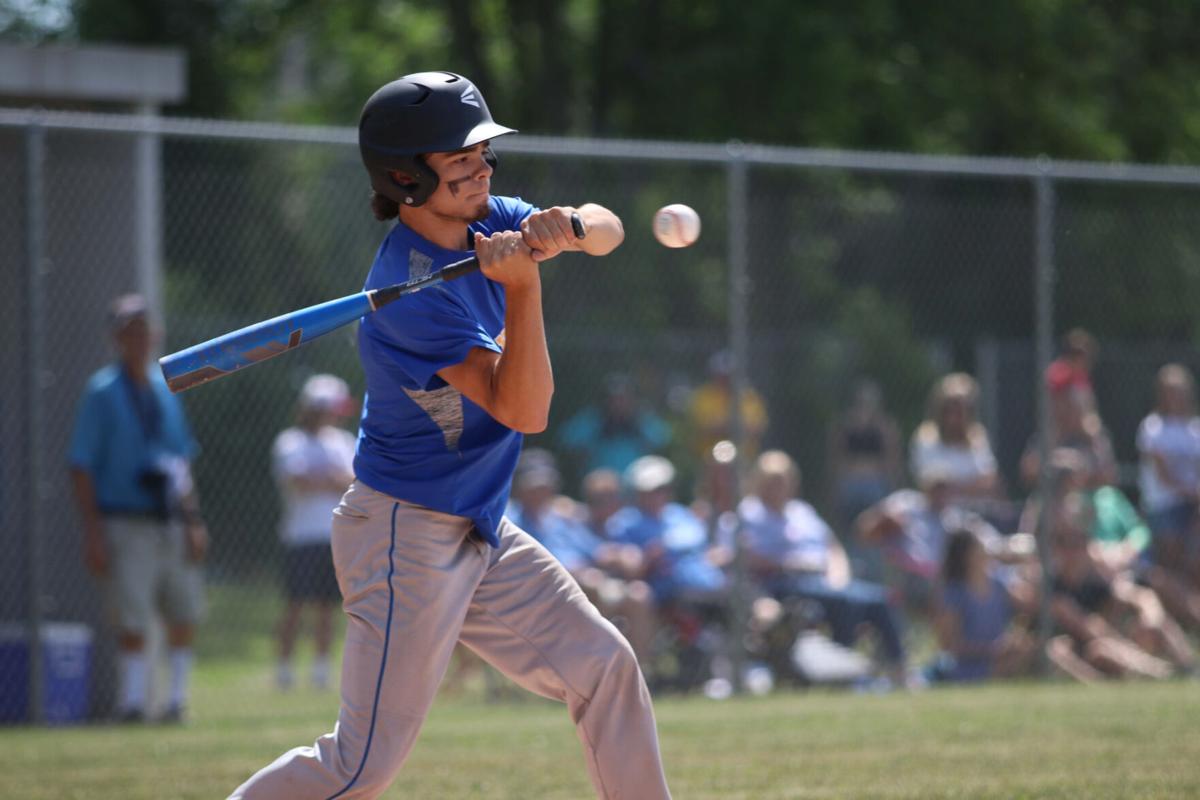 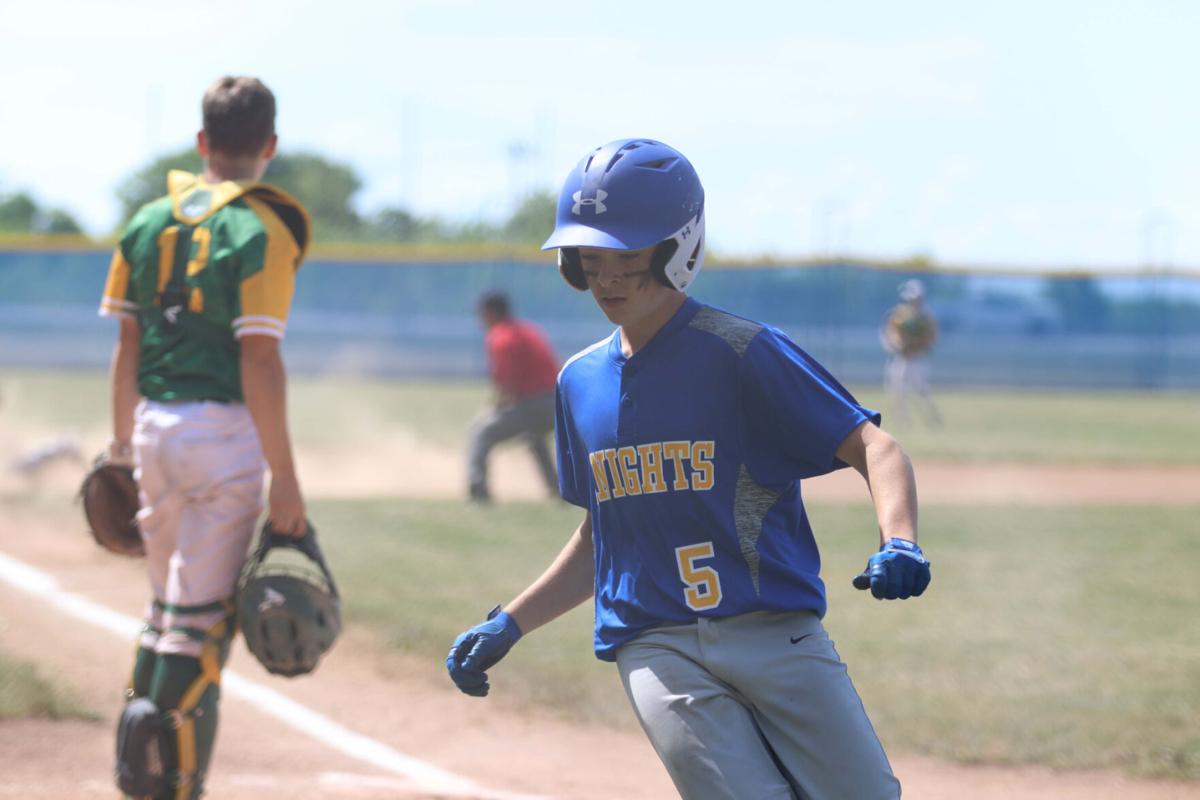 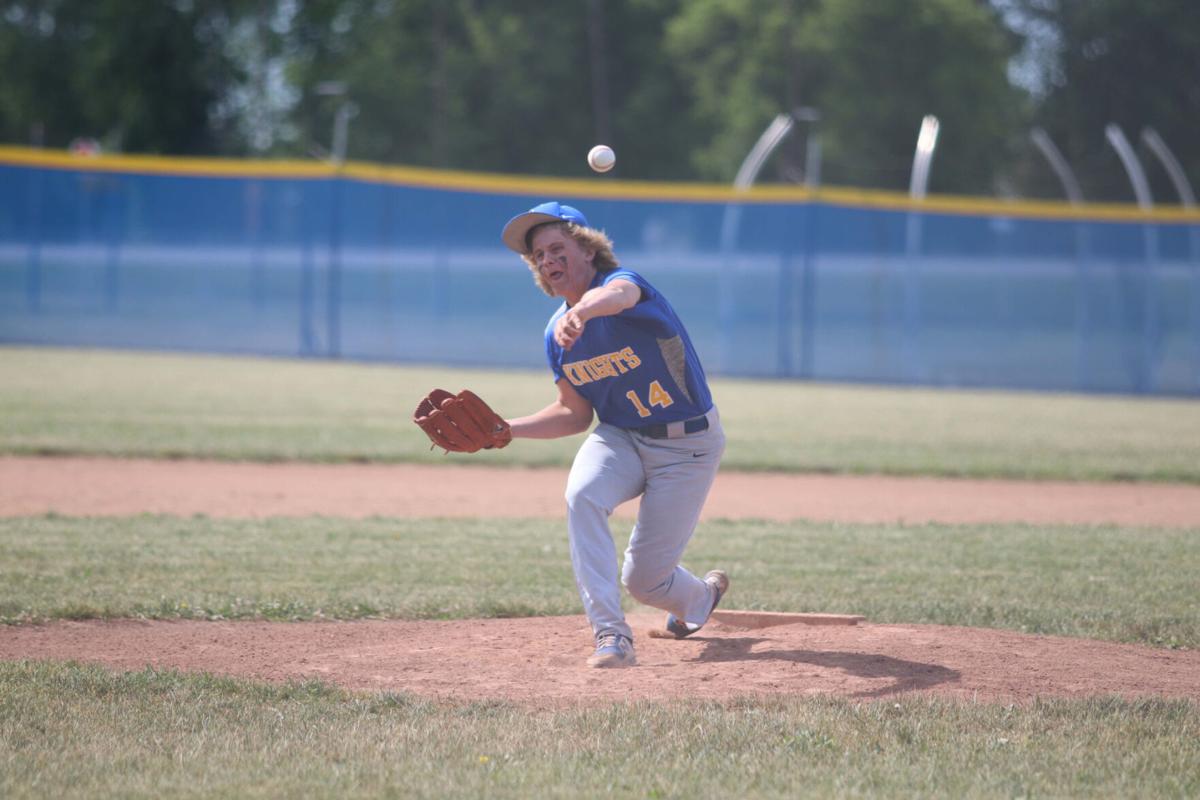 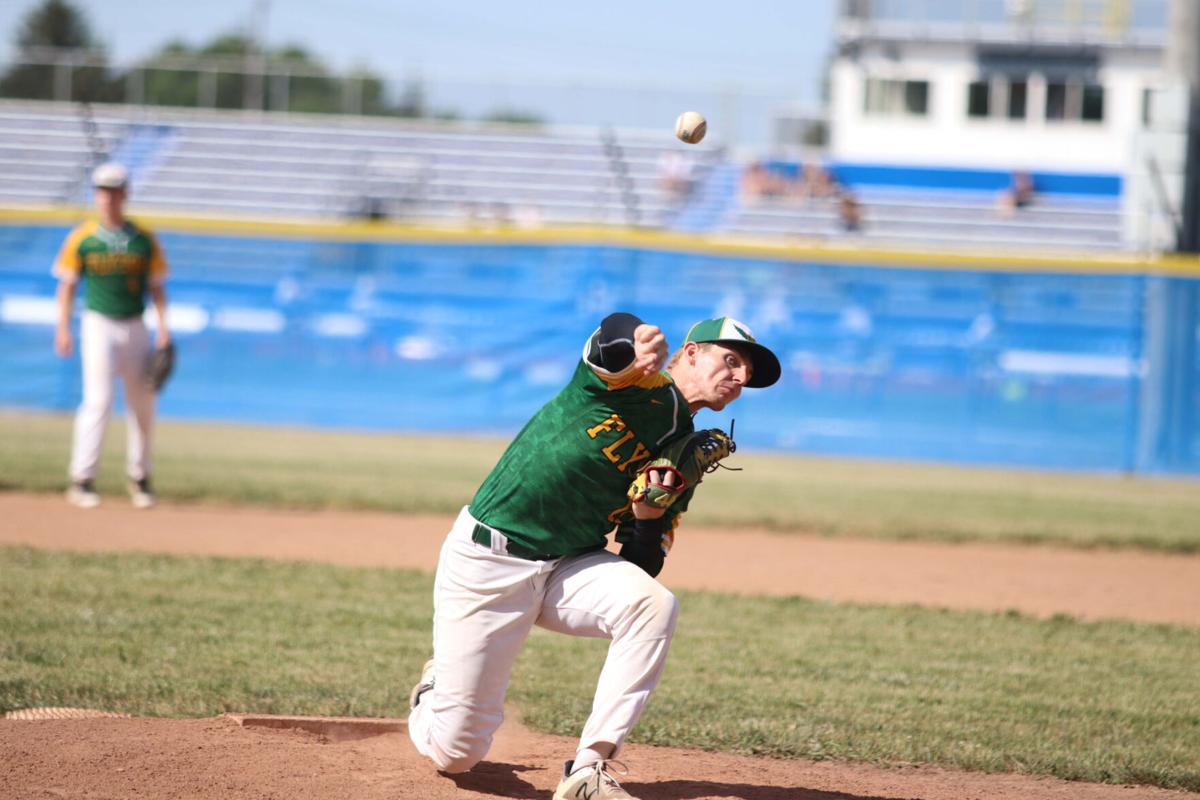 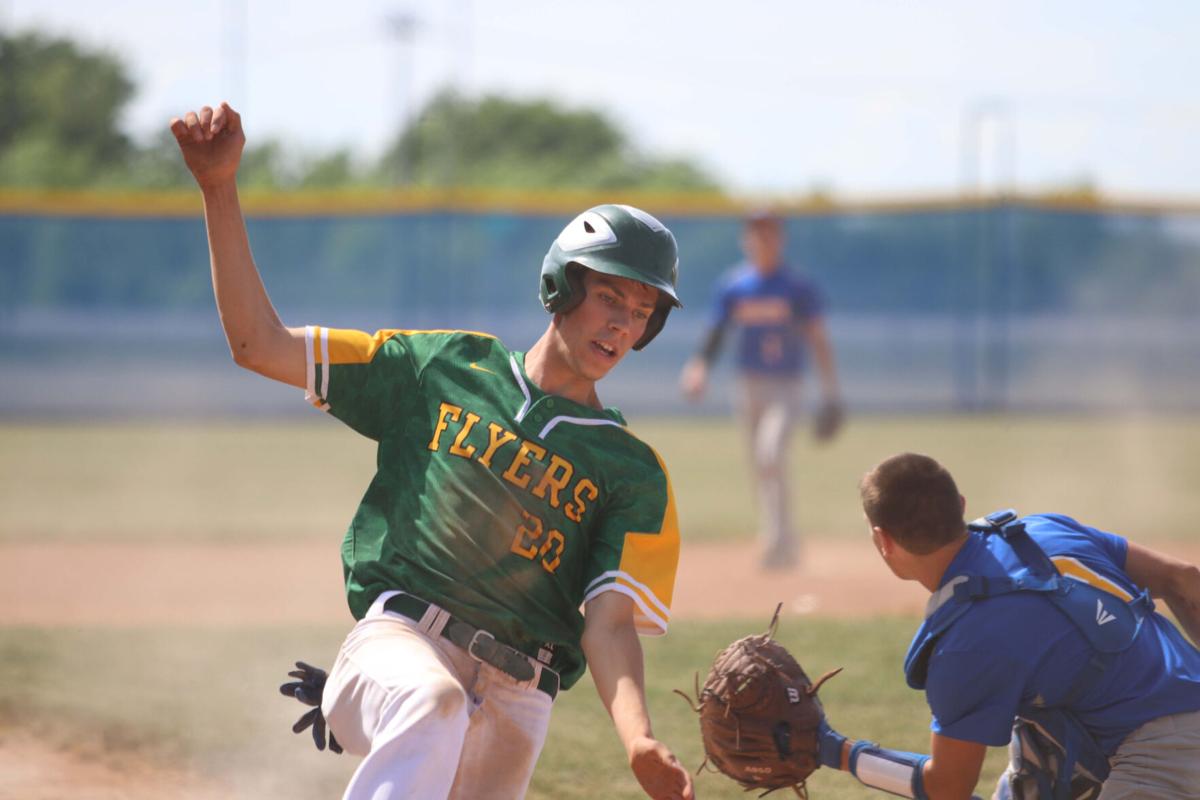 Noah Dominy slides into home off a sacrifice fly from Nicholas Tebo for Norwood-Norfolk’s lone run of the game in the second inning Saturday. Evan Wheaton/Malone Telegram 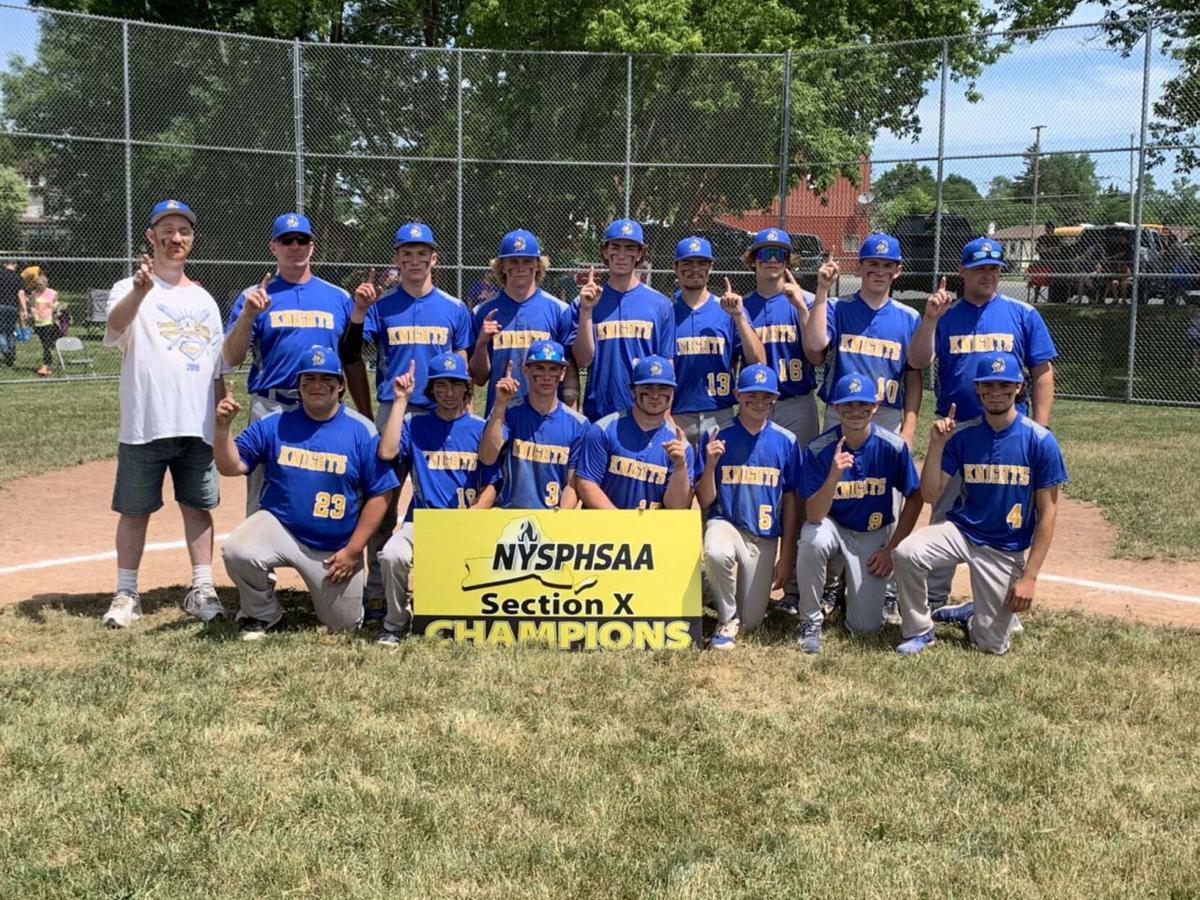 The Lisbon baseball team poses with its Section 10 Class C baseball championship banner. The Knights won the Class C title after moving up from Class D prior to the COVID-19 pandemic. Evan Wheaton/Malone Telegram

Noah Dominy slides into home off a sacrifice fly from Nicholas Tebo for Norwood-Norfolk’s lone run of the game in the second inning Saturday. Evan Wheaton/Malone Telegram

The Lisbon baseball team poses with its Section 10 Class C baseball championship banner. The Knights won the Class C title after moving up from Class D prior to the COVID-19 pandemic. Evan Wheaton/Malone Telegram

OGDENSBURG — Gouverneur’s first Section 10 Class B baseball title in 17 years came Saturday thanks to an aggressive baserunning strategy and solid pitching and defense.

The Wildcats (14-1 overall), the top seed, defeated No. 2 Canton 9-3 on a warm Saturday afternoon at Ogdensburg Free Academy.

Gouverneur pitcher Connor Wood held the Golden Bears (6-8) to just three hits and struck out seven, including the first and last batters of the game. He walked none and hit two batters.

The Wildcats began the game with a quick one-two-three inning and then started their offense with leadoff hitter Kyle Gaumes.

Gaumes, a Gouverneur native who in the past had also attended Lyme and LaFargeville, is playing baseball for the first time since he was 12.

Gaumes walked to lead off the bottom of the first for Gouverneur, and as he’s done nearly every time he’s reached base this season, he wound up scoring.

“We work nonstop running bases and we put pressure on teams,” Wildcats coach John Free said. “Sometimes we’re too aggressive, but it works for us. These kids work hard. If (Gaumes) gets on first, he’s usually on third in three pitches, and he had 26 stolen bases in 12 games. That’s pretty good.”

Gaumes, who will play men’s basketball at SUNY Potsdam next year, immediately stole second base, went to third on a throwing error on a pickoff attempt and scored on a single by Wildcats catcher Gabriel Wainwright. The Wildcats’ second batter, Nolan Reed, walked, too, and also scored on Wainwright’s single.

“We brought the energy, that was the biggest part,” Gaumes said of his team. “We never stopped having energy. As soon as I get on base I trust my teammates to bring me in. My main job the whole season has been to get on base. Coming back to the hometown, and winning a championship, it’s nothing you can really describe in words. It’s special.”

Canton responded to the 2-0 deficit by scoring twice in the top of the second to tie the game.

Scotty Ahfleld was hit by a pitch and moved to second on a hit by Colby Young. Ahlfeld scored on a single by Gavin Thompson and Young scored on a fielder’s choice.

Gouverneur added three more runs in the second to pull away for good.

After the first two batters reached on a walk and a fielder’s choice, Gaumes then singled in a run and once again stole second. Gouverneur’s Nolan Reynolds scored the fourth run of the game on a sacrifice fly by Jared Wilson and Gaumes scored the fifth on a double by Wainwright, who finished with three RBIs.

“It felt good to put the bat on the ball every time,” Wainwright said. “Getting ahead in the game is always better for us to stay up and keep good positivity.”

Only Young is a senior on Canton’s roster so the Golden Bears could challenge again for a Class B championship next season.

“We’re very young,” Canton coach Matt Caufield said. “We still made a couple young mistakes but I said to them that we will be back in this position again. We got some real valuable experience of being in a title game.”

The Section 10 Class C baseball championship was a showdown between the new kid on the block versus the old guard.

No. 3 Norwood-Norfolk is a perennial powerhouse, somewhat fresh off its latest Class C title in 2019 prior to the COVID-19 pandemic. No. 1 Lisbon made it to the final four in the Class D state tournament the same year.

After moving up to Class C this year, the Knights took the sectional title, 11-1 after five innings in Ogdensburg.

Walker pitched all five innings, striking out four batters with four hits and one walk allowed. Michael Hewey, Michael Richards and Robert Voss split time on the mound for the Flyers (10-5).

The lone run for Norwood-Norfolk came via a sacrifice fly from Nicholas Tebo to bring home Noah Dominy in the top of the second.

For Lisbon (14-0), the focus was enjoying another day at the office.

“Since we were 8 years old, we’ve played in tournaments around the state as a full group here, every one of these guys,” Knights coach Dave Gravlin said. “We played against bigger schools and bigger towns than Norwood-Norfolk. They’re not fazed by the size of any school or team.”

Ben LaRock and Trenton Williams had an RBI apiece to give the Knights a quick 2-0 lead in the first inning.

From there, an error at third base brought home Lucas Gravilin, followed by a line drive RBI for Collin Parmeter. Parmeter was then batted in with a shallow hit to left field to give the Knights a 5-1 cushion heading into the third inning.

Lisbon showed no rust after going without a season last year.

“We just got older and stronger, better I guess. More chemistry as a team,” Walker said. “We just go out there and do our job through the lineup. Everybody does their job.”

A bunt single brought home Williams for the only run of the third inning. The Knights had disciplined batting and played situational baseball to stay in control.

“We hit all the time and we’re (always) looking to hit. We’re going to be aggressive on the bases all the time,” Gravlin said. “We have a lot of confidence when we’re at the plate and we just keep that rolling.”

With a 6-1 lead midway through the fourth inning, Lisbon loaded the bases with no outs. Of the six walks the Knights took during the championship, four were in the bottom of the fourth.

“Our defense, our walks – that’s been our Achilles heel all year,” Flyers coach Steve Lashomb said.

A drop ball in the outfield brought one runner home, followed by two more runs before an out was made. A two-RBI double from Walker put Lisbon up 10 runs before the fifth inning.

Lisbon, the Class C champion, advances to the semifinal round of the Overall Section 10 baseball championship.

“Norwood-Norfolk is a really good team. Always well-coached, always well-prepared,” Gravlin said. “We just went into it knowing, hey, it’s another baseball game. If we do what we have to do, we’ll be in good shape.”

In 2019, Top-seeded Heuvelton was upset in the Section 10 Class D final by Lisbon, which went on to the state semifinals. Last season, just after Heuvelton started practice for a quest to reclaim the Class D title, the COVID-19 pandemic put sports on lockdown.

“It really means a lot to win this title after waiting two years,” said Adam Calton, who picked up the victory after relieving starting pitcher Jordan Sawyer in the fifth inning.

“It feels amazing because I did it with guys who come in every day and do the work. Now we get to go on which should be fun. It was a good game today, E-K was tough.”

The Bulldogs opened a 3-0 lead in the first two innings and dropped into a 3-3 tie in the top of the fifth inning with Edwards-Knox pitcher Jared Lottie anchoring the Cougars’ comeback, allowing just four hits in authoring his fourth complete game of the season.

Heuvelton broke tie in the bottom of the sixth when Lucas Thornhill was hit by a pitch, moved around to third on a single by Braeden Free and scored a bases loaded wild pitch.

Calton then retired the side in the bottom of the seventh inning, aided by a spectacular diving catch by rightfielder Brandon Pray on a flyball in foul territory.

“This game was a lot like a lot of championship games where there aren’t a lot of runs scored,” said Heuvelton coach Dave Steele. “Jordan Sawyer was the big key for us, he got us to the fifth inning so Adam Calton could close.

“Jordan is a lefty and he throws strikes,” he added. “Edwards-Knox was tough and their pitcher threw well. We didn’t hit as well as I would like but we played good defense and Adam closed very strong.”

Mason White and Kolby Barbarito singled and scored for Edwards-Knox in the fourth inning and Joe Huckle stroked an RBI single.

“We had a good season and guys improved all the way. We won three of our last four games to get the third seed,” said Edwards-Knox coach Rob White. “This was a good baseball game with pitchers throwing strikes and guys making plays and not making many errors.”