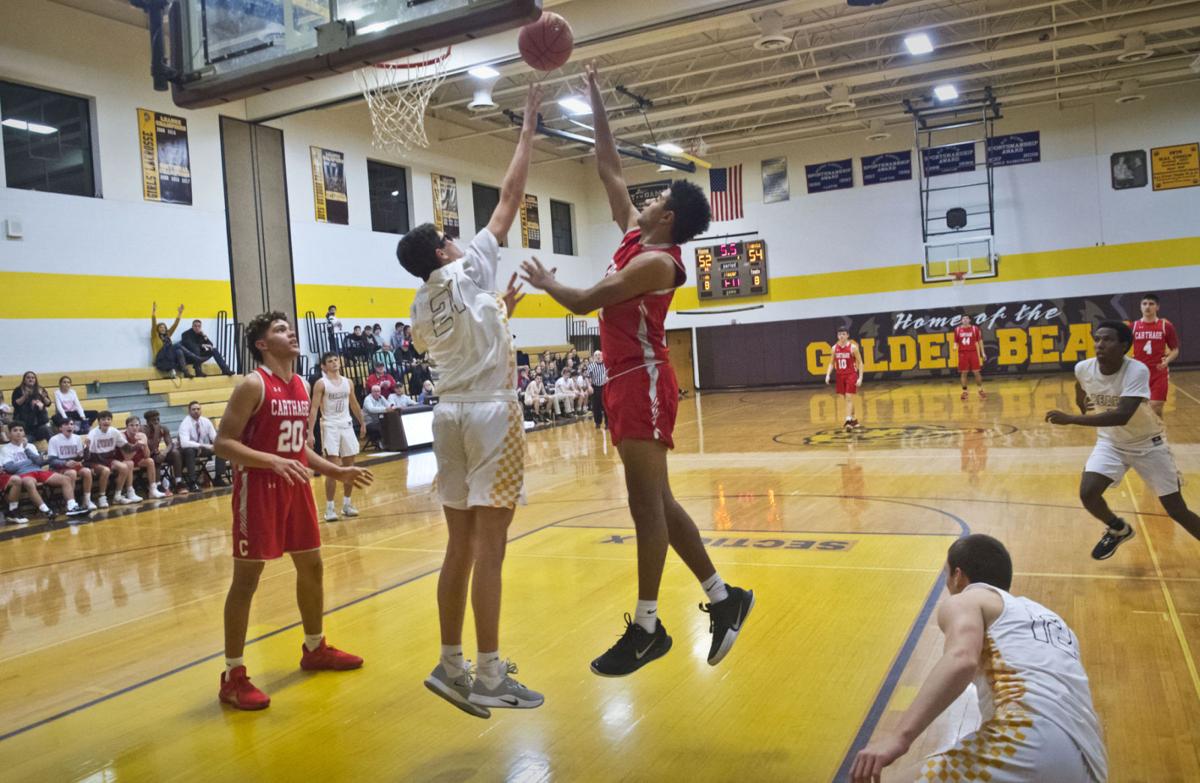 Carthage’s Elijah Whitfield shoots over the defense of Canton’s Christopher Downs to seal the victory in the final seconds of Wednesday’s game. Christopher Lenney/Watertown Daily Times 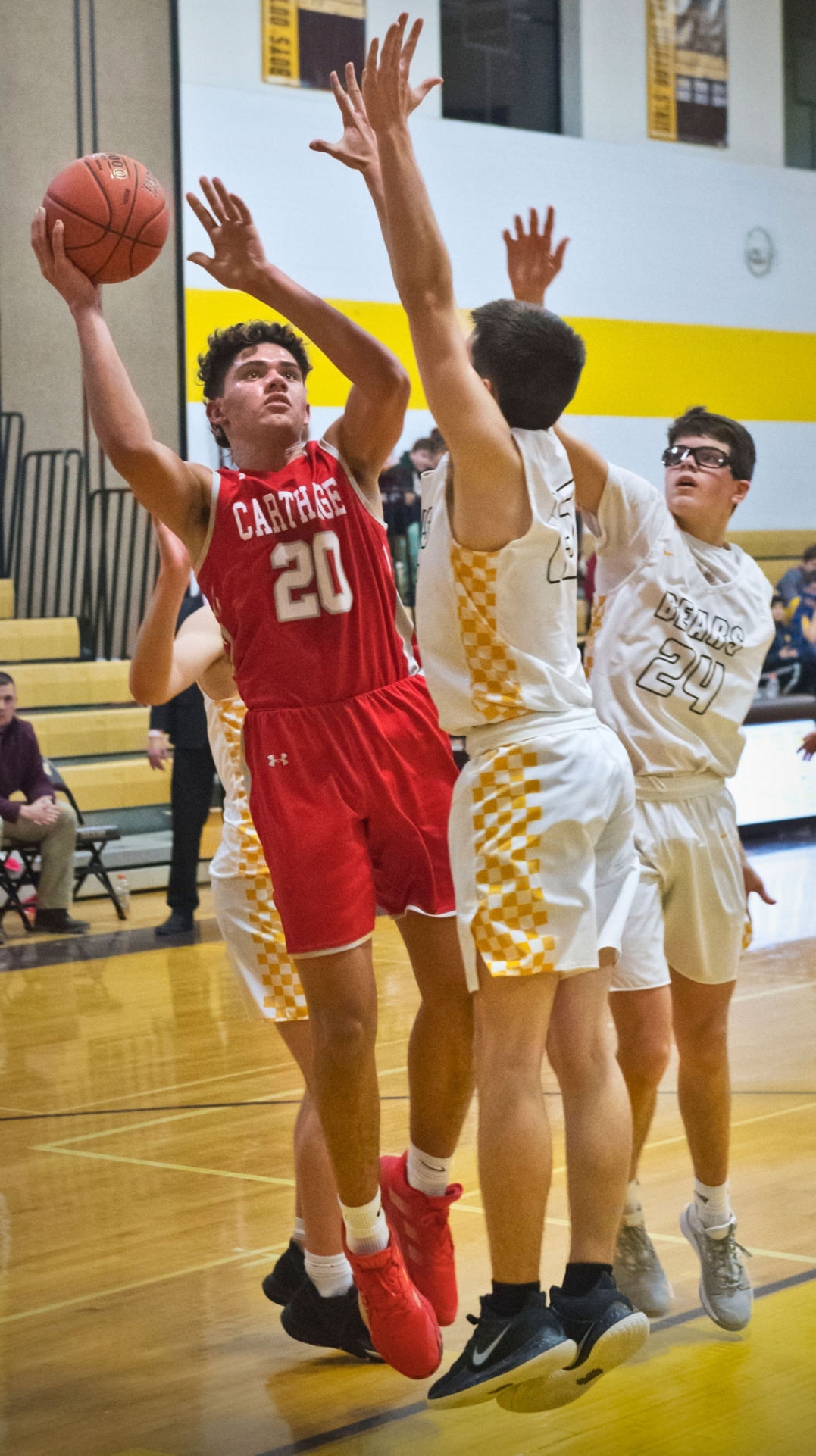 Carthage’s Zion Tevaga shoots around a triple team of Canton defenders in the second half Wednesday. Christopher Lenney/Watertown Daily Times 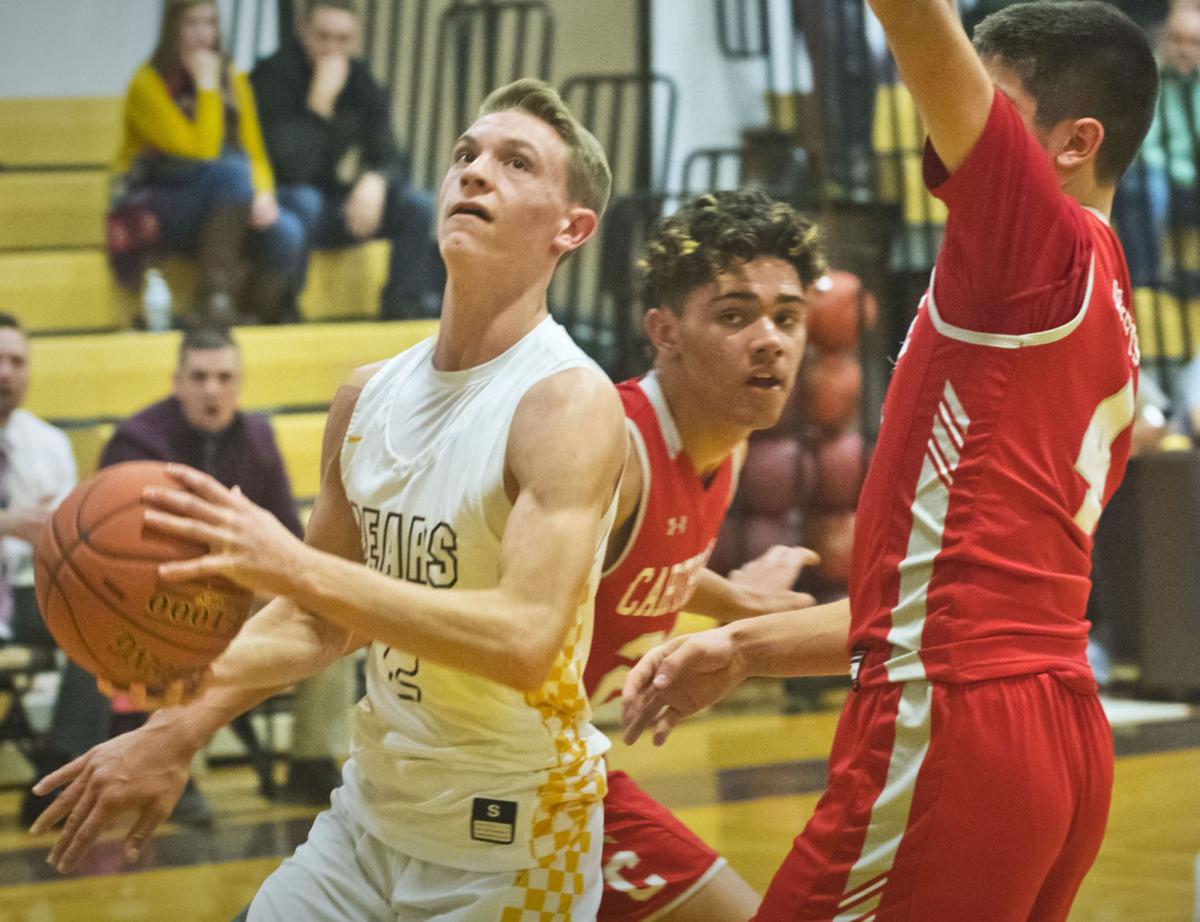 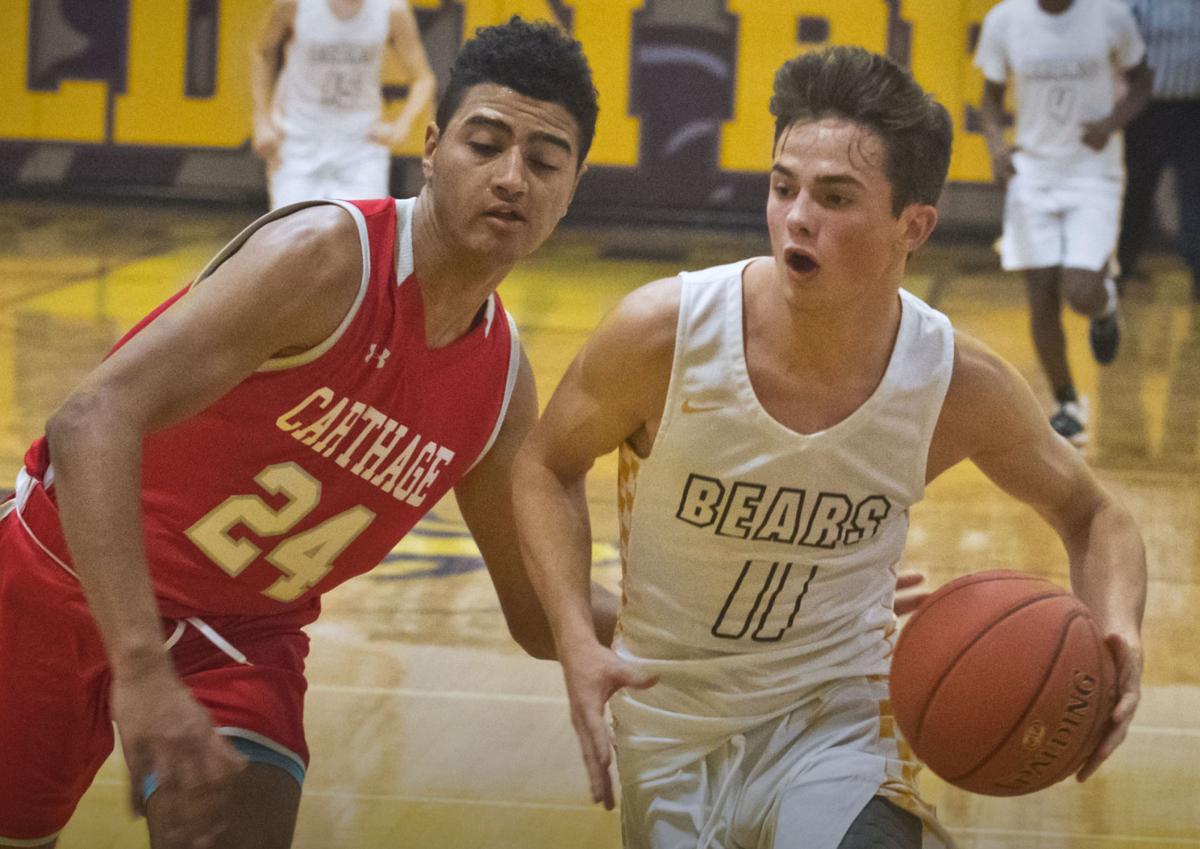 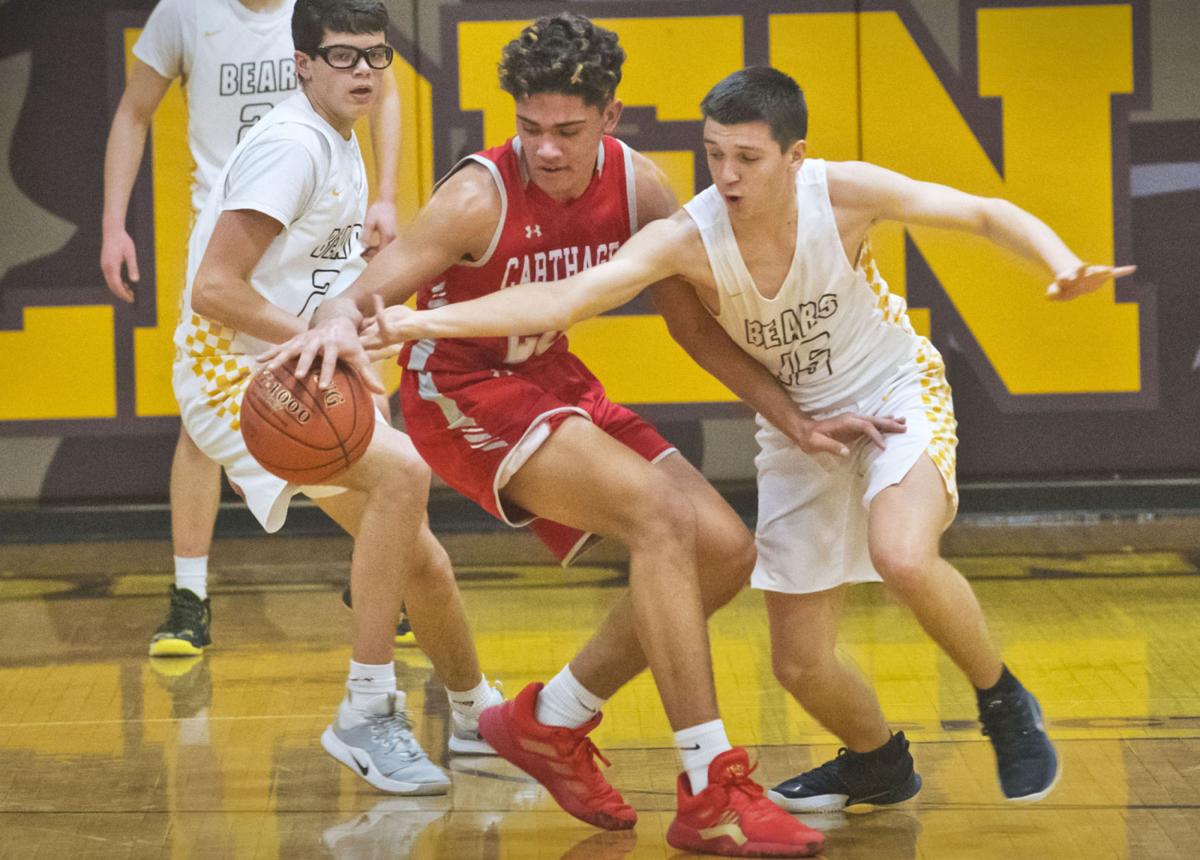 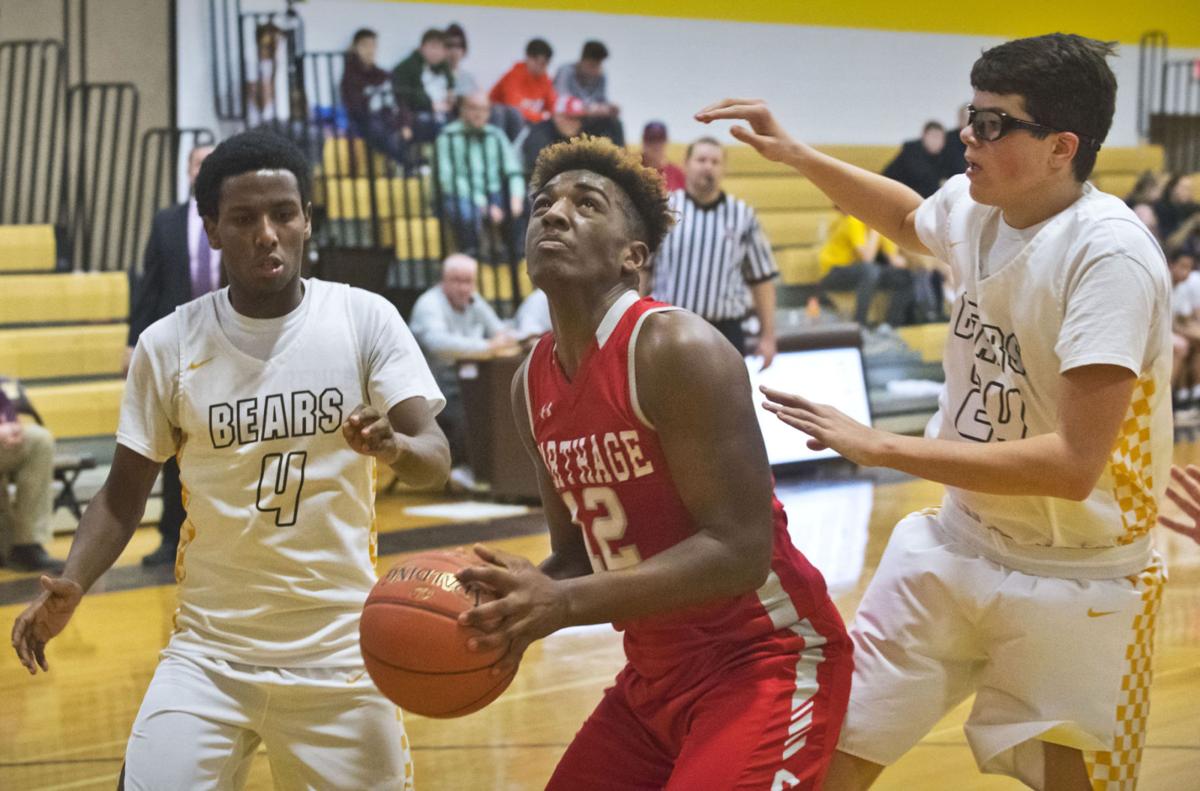 Carthage’s Elijah Whitfield shoots over the defense of Canton’s Christopher Downs to seal the victory in the final seconds of Wednesday’s game. Christopher Lenney/Watertown Daily Times

Carthage’s Zion Tevaga shoots around a triple team of Canton defenders in the second half Wednesday. Christopher Lenney/Watertown Daily Times

CANTON — The Carthage boys basketball team was struggling heading into Wednesday’s nonleague game at Canton, but found a spark in the fourth quarter and rallied from an 11-point deficit to beat the Golden Bears, 56-52.

The Comets (2-4 overall) trailed 47-36 with 6 minutes, 31 seconds remaining, then outscored Canton 20-5 the rest of the way to pull out an impressive road win.

“This game was huge for the kids’ confidence,” Carthage coach Jeff Ventiquattro said. “I think that was biggest thing. We’ve taken the best shot of the opposing team a lot. Each team has shot really well against us. In this game Canton came out and kind of punched us in the mouth. We kept it close. They took an (11-point) lead early in the fourth quarter and I think loose balls and execution down the stretch was the key.”

Carthage took the lead for good when freshman Ashton Norton hit a 3-point basket with 36 seconds left to give the Comets a 53-51 lead.

“It’s a great feeling,” Whitfield said of the win. “We know it’s a struggle to come up here and play. To just get a (win) finally, after our losing streak, it just felt nice. Now we can continue this winning streak. It can build our confidence 100 percent. We were down from losing so much. Now it gives us some energy and gets us ready for the rest of the season.”

Tevega and Whitfield then scored on back-to-back inside shots to tie the game 47-47 with 2:12 remaining.

Canton (7-3) answered with a basket from Caleb Bentley-Hicks to take a 49-47 lead but then Tevaga scored inside and was fouled and hit the free throw to put the Comets up 50-49. Canton responded with a jump shot from the top of the lane by Chris Downs to go up 51-50 with 1:03 left.

Norton answered that with his 3-pointer which was followed by a free throw from Canton’s Ashton Cloce to cut the lead to 53-52 with 18 seconds left.

Tevaga made a free throw with 12.4 seconds left to give Carthage a 54-52, missing his second attempt, but Canton traveled while trying to grab the rebound.

Tevaga added one more free throw with 9 seconds to go and scored on a steal with 3.5 seconds left to end the scoring.

“We executed our plays and we scored and we came back and got the win,” Tevaga said. “We were down and Ashton hit that (3-pointer) and that really boosted our confidence and got us back in the game. All of our big men rebounded and got passes to the right people and we made the right shots.”

Carthage frustrated the Golden Bears throughout the game when it came to grabbing rebounds, holding a 34-27 edge over Canton.

“We’re not very good right now,” Canton coach Troy Lassail said. “We haven’t been playing well in the last couple of games. We are so young, and not strong, and guys get the ball taken from them and we don’t box out. That’s how an (11-point) lead evaporates. Carthage did the gritty things that they needed to, to win, and we don’t respond well to that.”

Whitfield paced the Comets with 21 points, scoring on 10 of 18 shots. Tevaga finished with 18 points and grabbed eight rebounds.