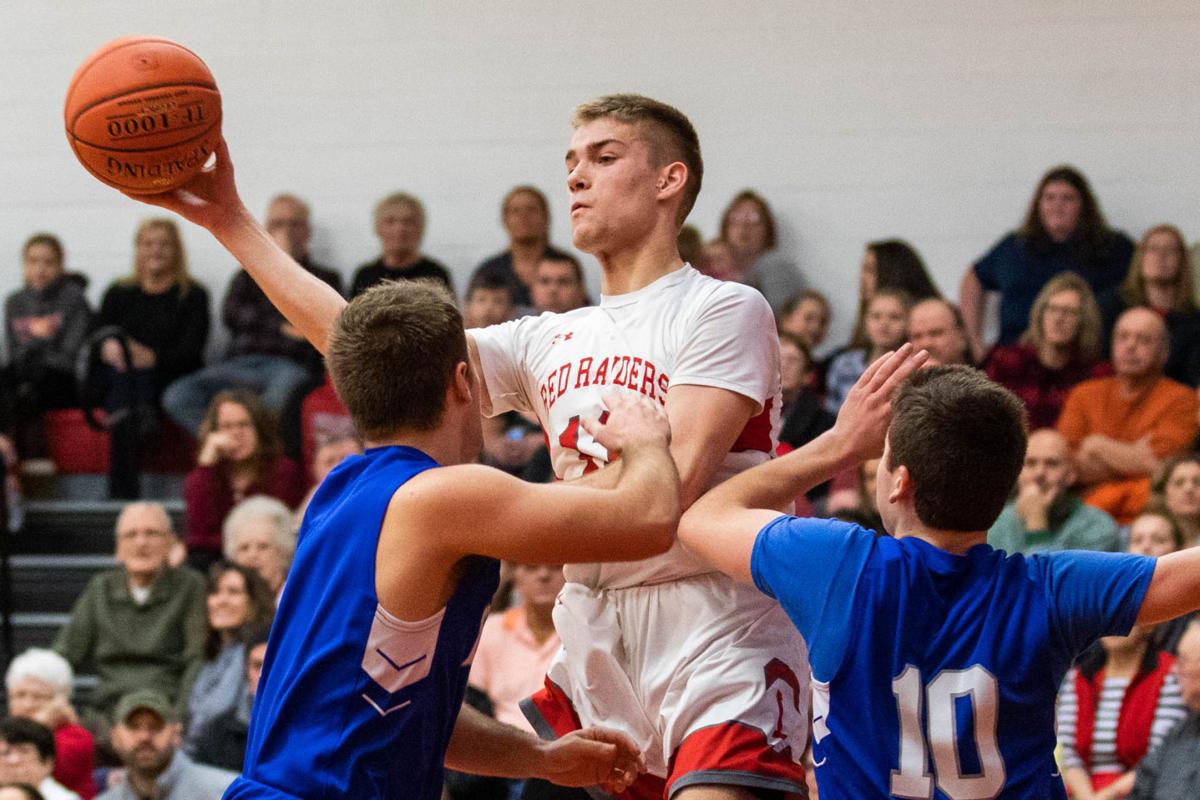 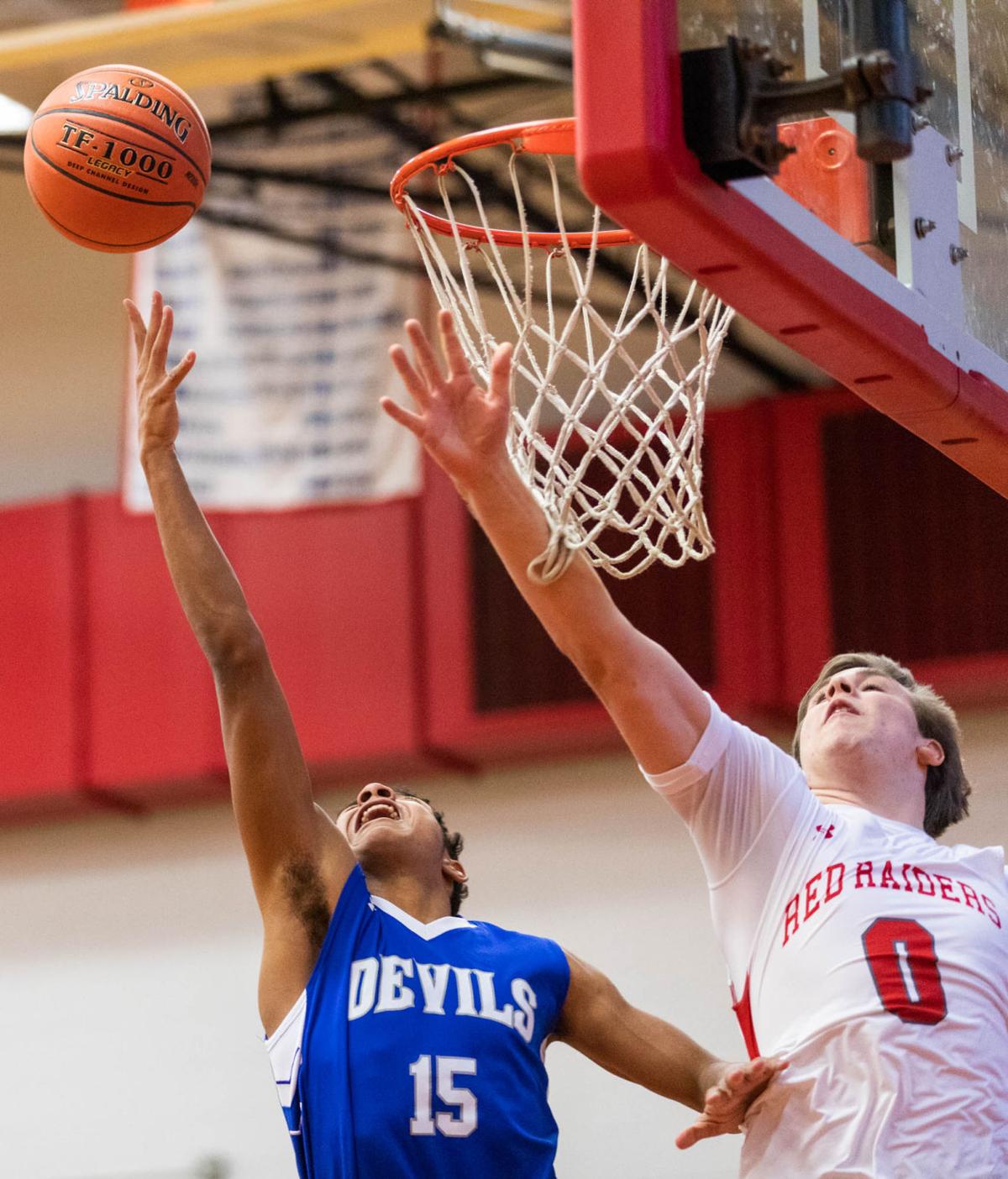 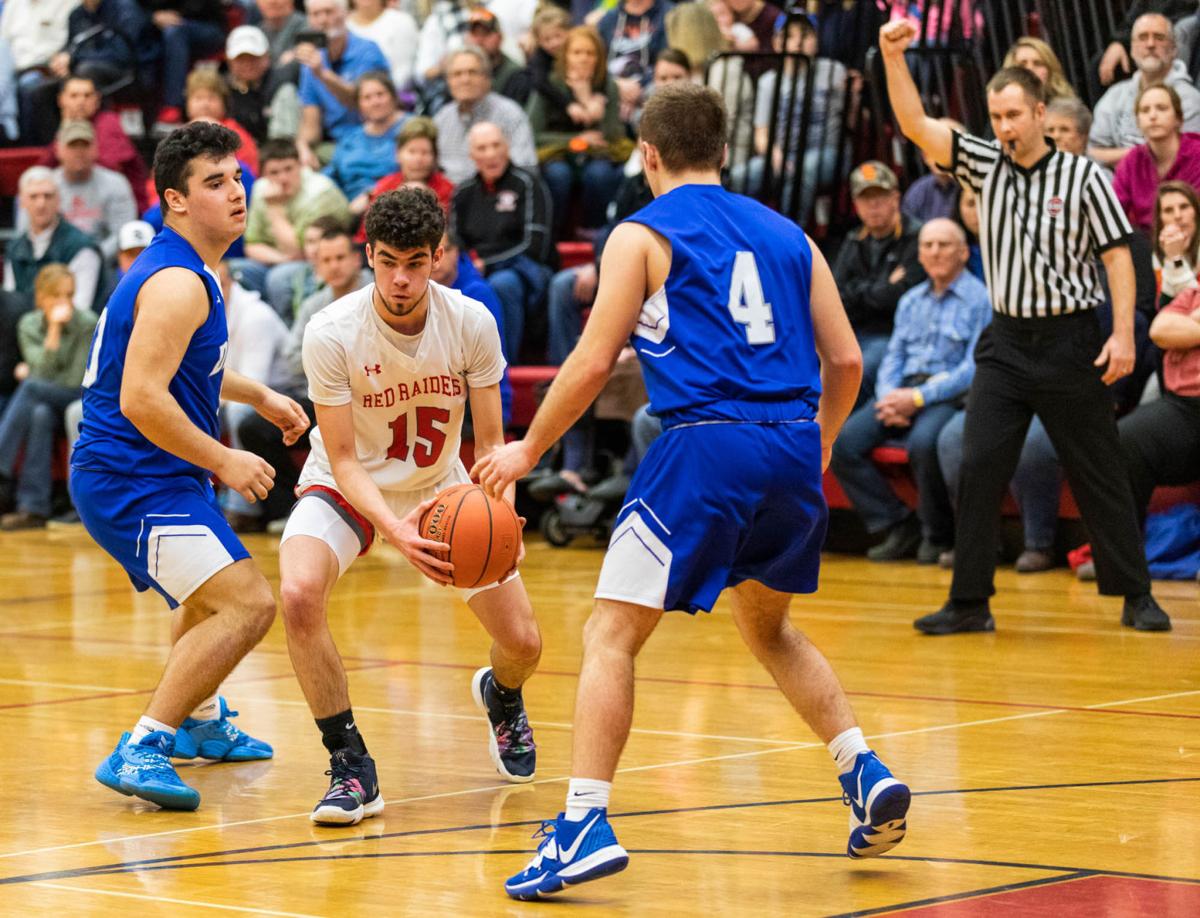 Lowville’s Aidan Zehr, center, holds onto the ball after a personal foul is called during Saturday’s game against OFA in Lowville. Sydney Schaefer/Watertown Daily Times 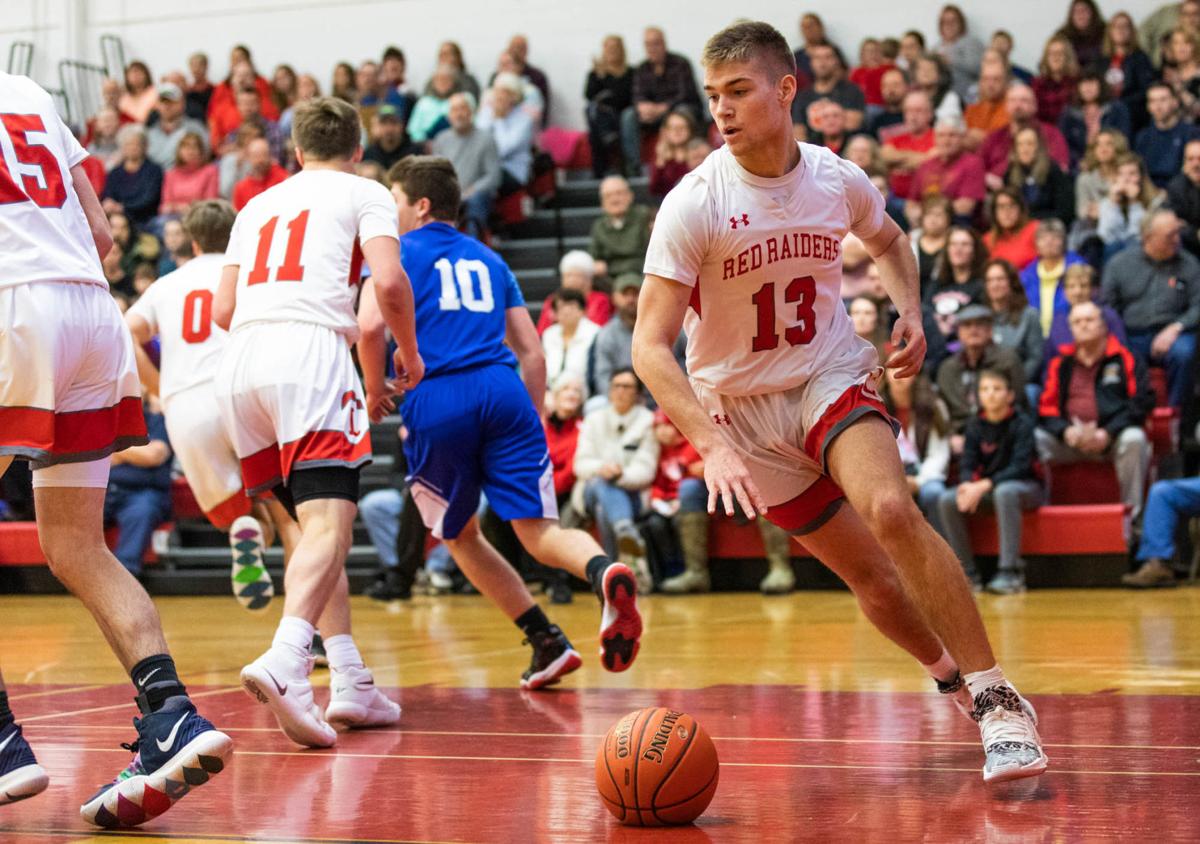 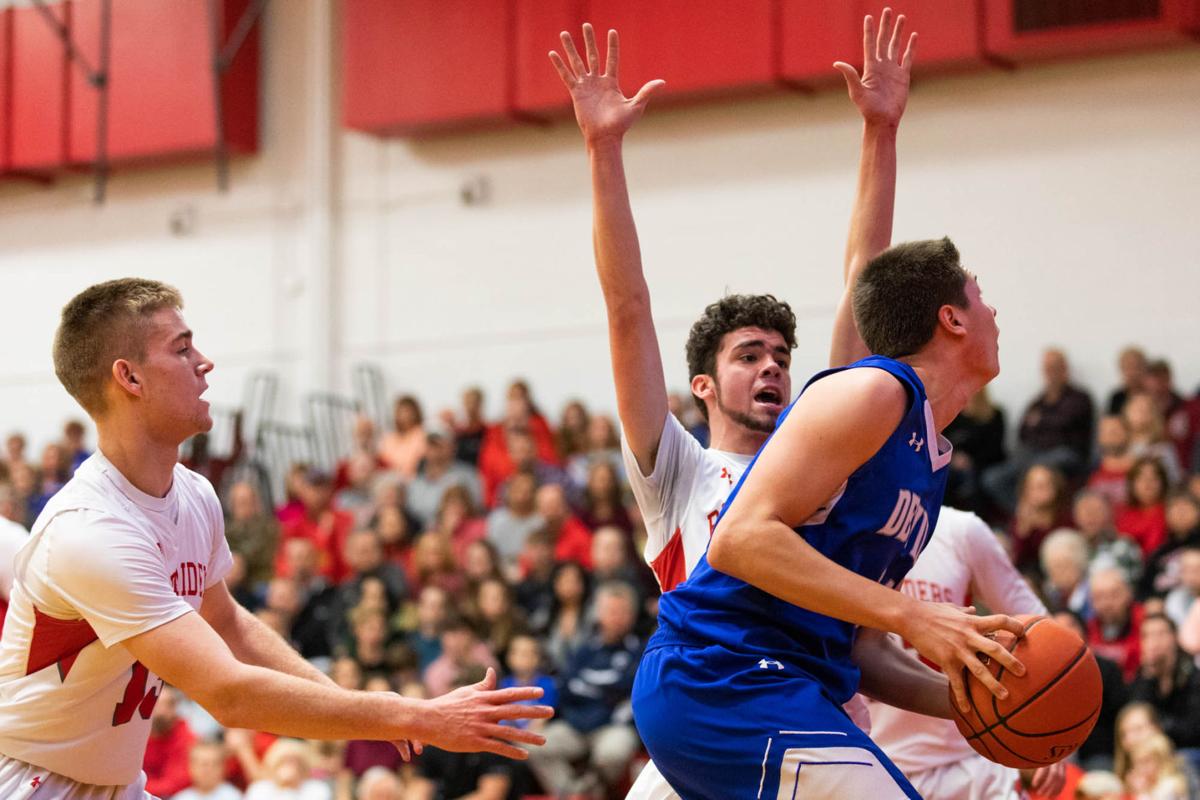 Lowville’s Aidan Zehr, center, holds his arms over his head while defending an OFA player from scoring during Saturday’s game in Lowville. Sydney Schaefer/Watertown Daily Times 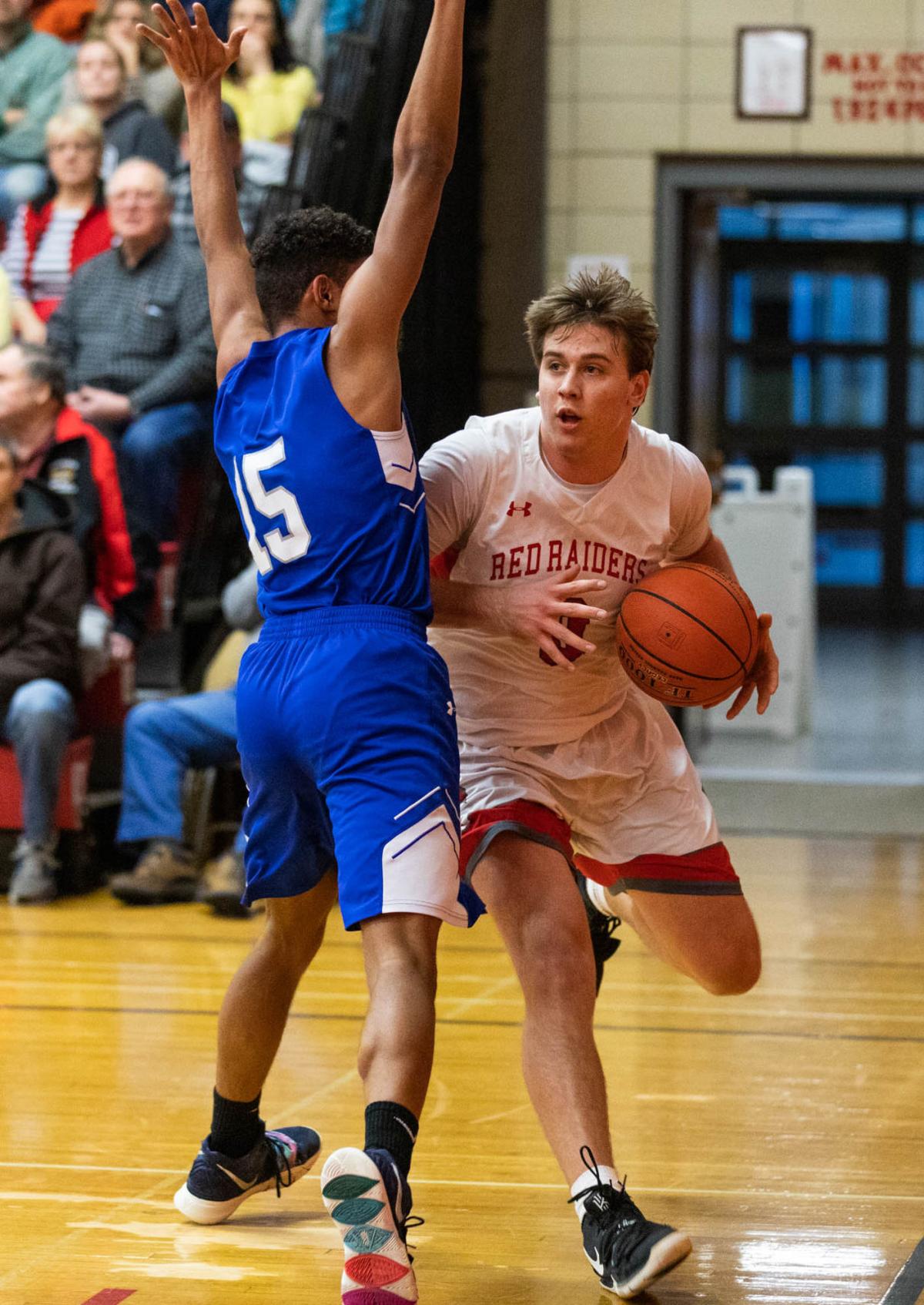 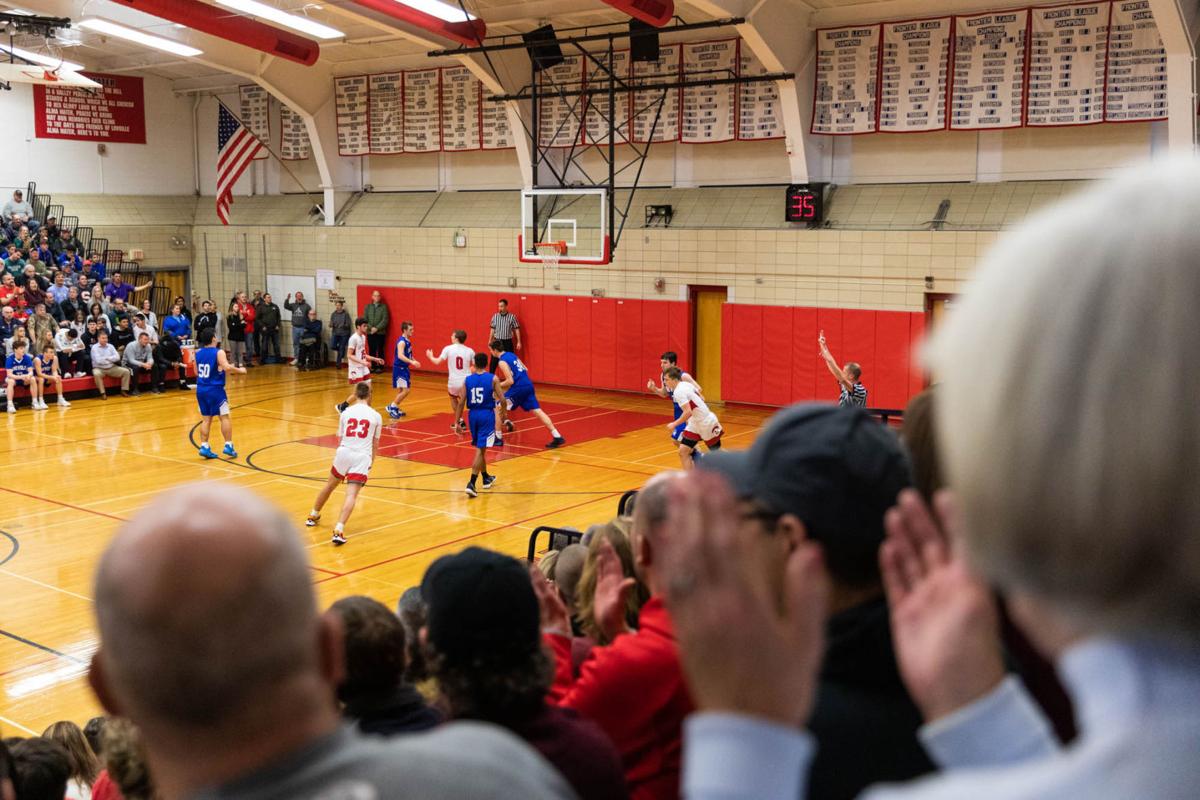 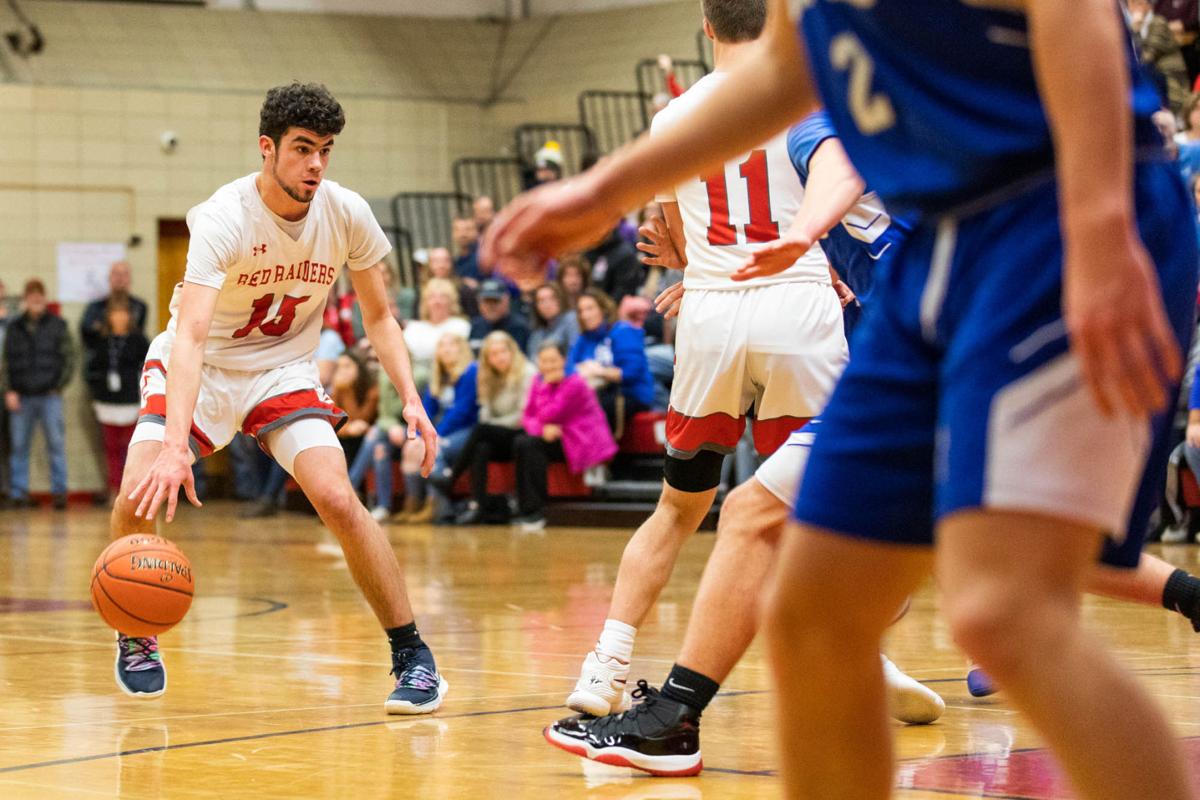 Lowville’s Aidan Zehr dribbles the ball before passing to a teammate during Saturday’s game against OFA in Lowville. Sydney Schaefer/Watertown Daily Times 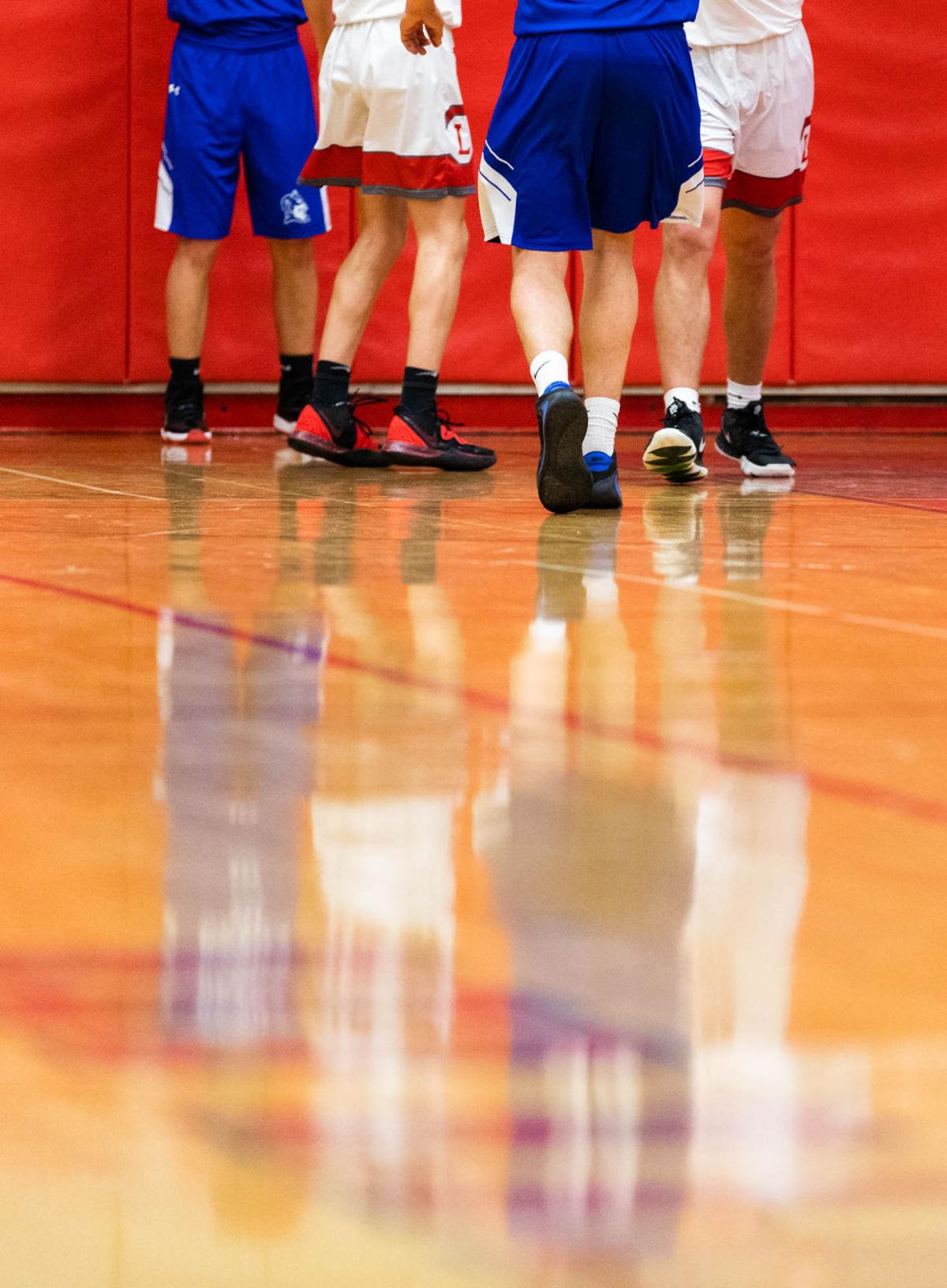 The reflections of Lowville and OFA players are seen on the gym floor during Saturday’s game in Lowville. Sydney Schaefer/Watertown Daily Times

Lowville’s Aidan Zehr, center, holds onto the ball after a personal foul is called during Saturday’s game against OFA in Lowville. Sydney Schaefer/Watertown Daily Times

Lowville’s Aidan Zehr, center, holds his arms over his head while defending an OFA player from scoring during Saturday’s game in Lowville. Sydney Schaefer/Watertown Daily Times

Lowville’s Aidan Zehr dribbles the ball before passing to a teammate during Saturday’s game against OFA in Lowville. Sydney Schaefer/Watertown Daily Times

The reflections of Lowville and OFA players are seen on the gym floor during Saturday’s game in Lowville. Sydney Schaefer/Watertown Daily Times

LOWVILLE — Ogdensburg Free Academy’s trip down to Lowville for a boys basketball game between two state-ranked teams generated a playoff atmosphere in the Red Raiders’ gym on Saturday afternoon.

The home team was able to let out cheers in the end as No. 2 Lowville defeated the No. 18 Blue Devils 69-55 for its fifth straight victory.

The game meant nothing to either team’s league record but for Lowville it was an opportunity to see how it matches against a team equal in talent, a rare chance for the Red Raiders during the regular season.

Spread out evenly across Lowville’s 17-game schedule are three games where the Red Raiders (7-1, 4-0) are challenged: they lost to Albany Academy (No. 9 in Class A) on Dec. 14, defeated OFA (No. 18 in Class B) on Saturday and will play OFA again on Jan. 25 in Ogdensburg.

“It kind of reminds me of football sometimes and football season,” Lowville’s Aidan Macaulay said. “You only play so many games and people don’t want to lose so they don’t want to play the best teams, so they just mop everybody, get to the end and you haven’t played anybody good. This is different, playing Albany [Academy] early gives you a taste of it, playing OFA twice in the middle and end really gives you a taste of what’s going to come in sectionals.”

Lowville never trailed to OFA (5-3) but faced adversity in the third quarter when lead scorer Gavin Macaulay got into foul trouble and was benched. The Blue Devils, trailing by nearly 20 at some points, came as close as six points to tying Lowville.

“These games, it’s nice to just be tested,” Lowville coach Zach Shambo said. “We want to be tested, we want to see where we’re at win or lose. We’re not trying to go undefeated, we’re trying to be the best that we can be come the middle of February.”

When Lowville was able to play its starting lineup of Aiden Zehr, Gavin Macaulay, Aidan Macaulay, Brett Myers and Chad Bach, they showed they were the more talented team on the court. Gavin Macaulay finished with 21 points while Aidan Macaulay had 14, Bach had 11 and Zehr had nine; the Red Raiders made a total of 12 3-pointers in the game with each scorer draining at least one.

When OFA, led by Jackson Jones who had a team-high 22 points, started to gain momentum against a smaller Lowville lineup in the third quarter, Red Raiders freshman Brody Brown began to get hot.

Brown, playing in only his fourth varsity game, hit three clutch 3-pointers in the second half to give Lowville some breathing room as the Blue Devils continued to bear down.

For Brown, Saturday’s game felt like a long way from those junior varsity contests.

“I was kind of nervous, it’s one of my first actual varsity games, but then these guys just give you the ball and you can make the plays,” Brown said. “All those people, that’s not happening at JV.”

Brown being a relatively unknown player in the section reminded Aidan Macaulay of similar situation the Red Raiders were in last season.

“I was talking to people up in the crowd before the game as we were walking in there and they were saying ‘Brody really helps you,’ yeah, we’re scary when he’s aggressive and gets shots,” Macaulay said. “It reminded me of last year, Aiden Zehr was kind of a secret, nobody really defended him like they should have and he got hot. I think Brody can do a similar thing.”

Shambo noted how Brown gained the trust of his teammates over the summer and with his work throughout the season. As Lowville approaches the latter half of the regular season, Shambo will have to determine who his biggest weapons are off the bench, since he will almost certainly have to use them come playoffs.

“We know in the long run we’re going to need seven, eight, 10 guys playing so we are going to have to have guys who can come off the bench and contribute, not just come in to come in.” Shambo said. “He just has to get used to the speed, once he gets used to the speed his skill level is going to keep getting better.”

Were the OFA coach and their players unavailable for comment?