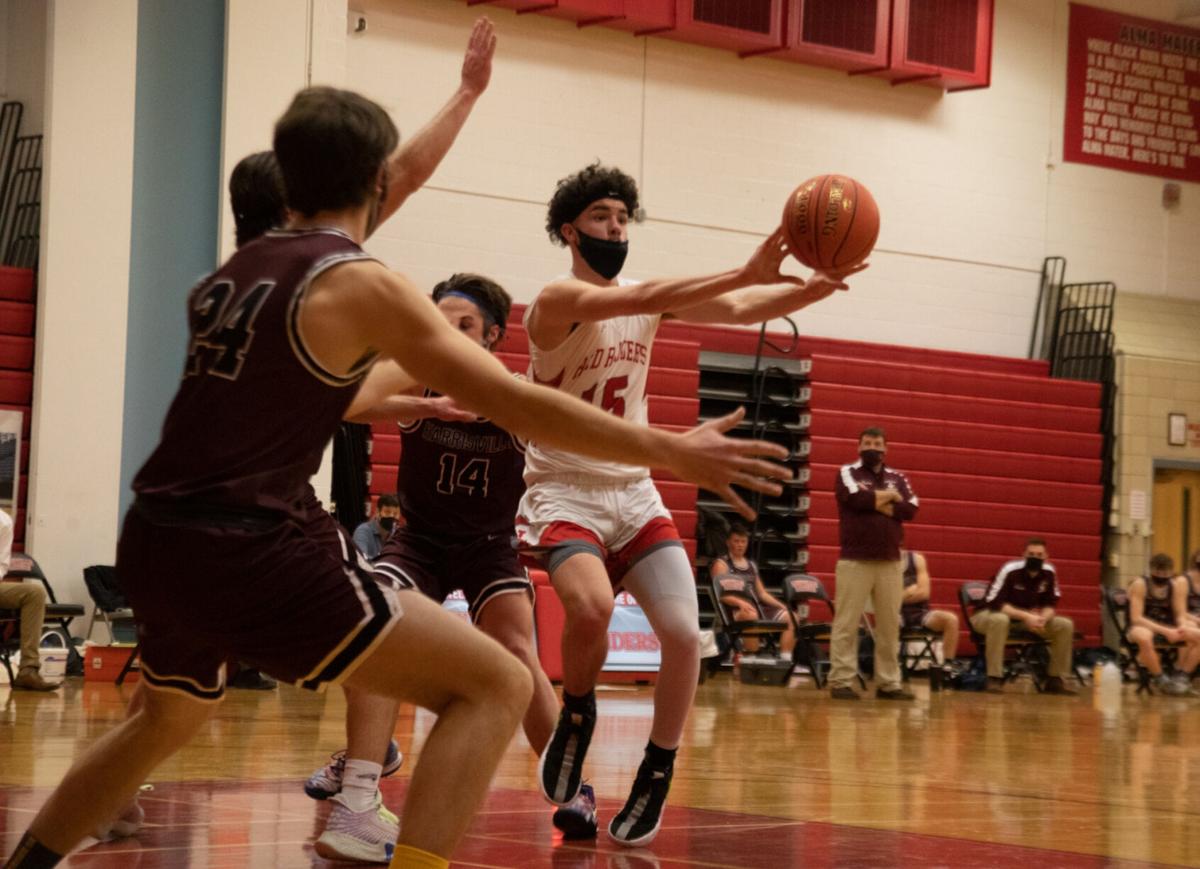 Aidan Zehr, right, passes out of the paint in Lowville’s 79-38 win over Harrisville in Lowville on Friday. Philip Sanzo/Watertown Daily Times 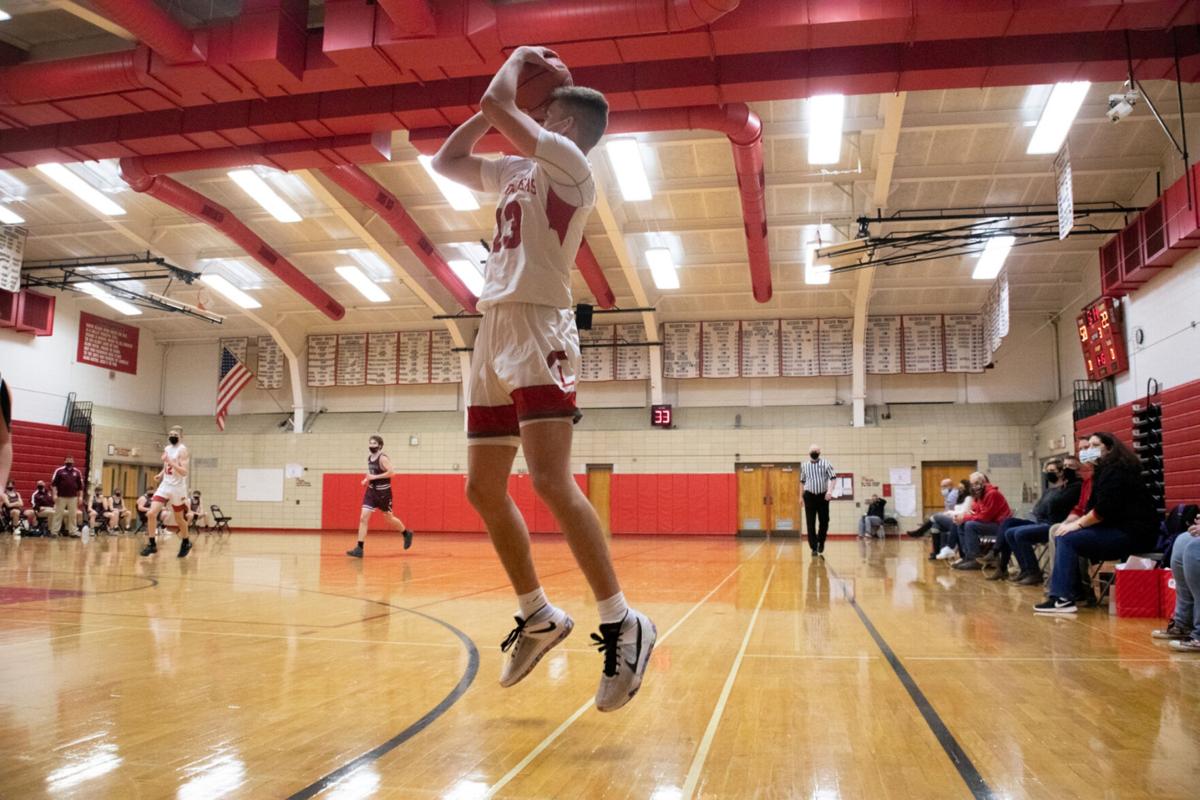 Gavin Macaulay pulls up for a corner 3-pointer in Lowville’s 79-38 home win over Harrisville on Friday. Philip Sanzo/Watertown Daily Times 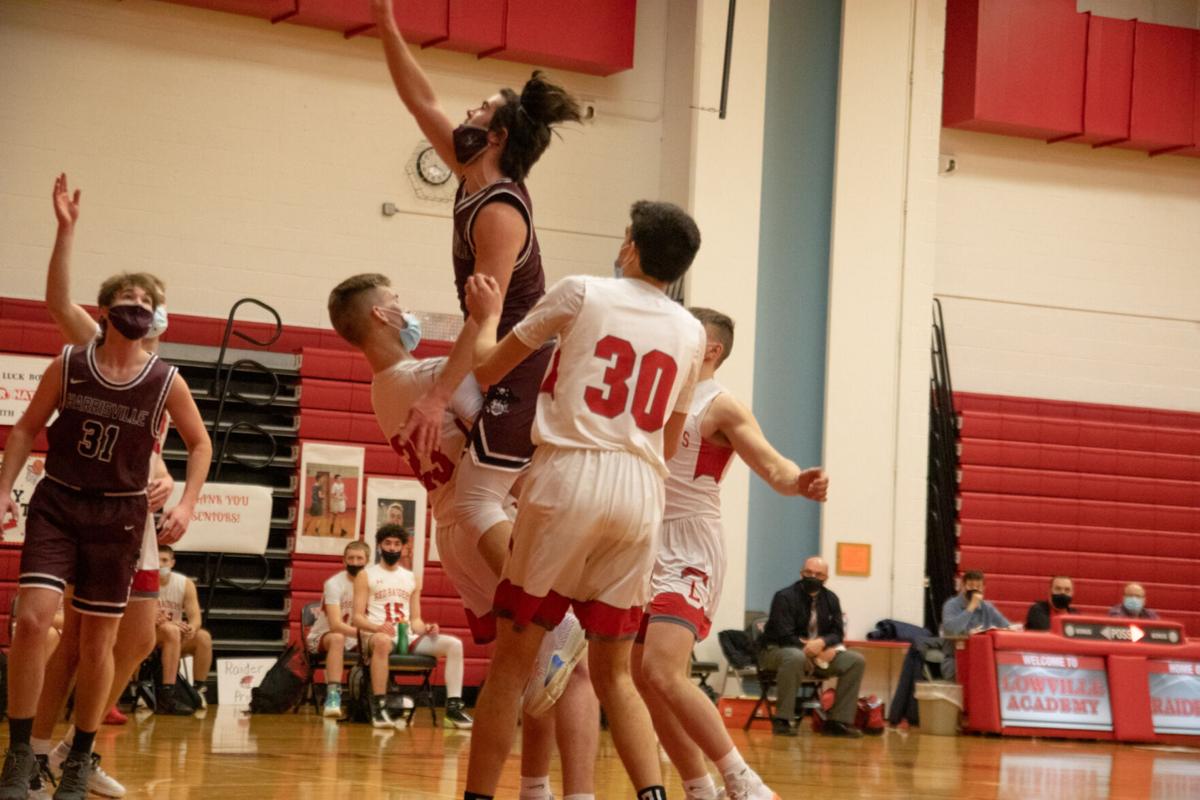 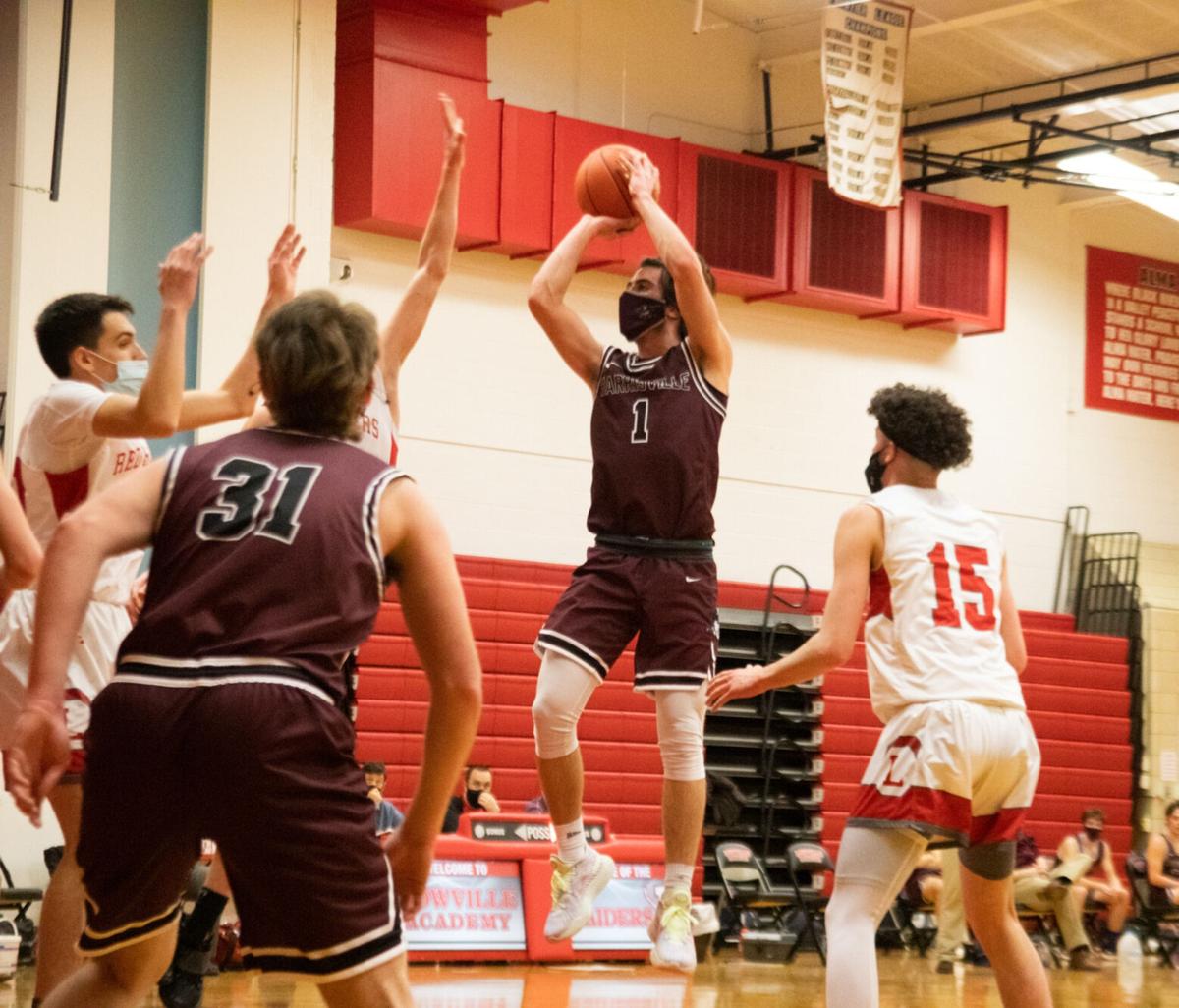 Harrisville’s Nate Schmitt pulls up for a mid-range jumper in the Pirates’ 79-38 loss to the Red Raiders in Lowville on Friday. Philip Sanzo/Watertown Daily Times

Aidan Zehr, right, passes out of the paint in Lowville’s 79-38 win over Harrisville in Lowville on Friday. Philip Sanzo/Watertown Daily Times

Gavin Macaulay pulls up for a corner 3-pointer in Lowville’s 79-38 home win over Harrisville on Friday. Philip Sanzo/Watertown Daily Times

Harrisville’s Nate Schmitt pulls up for a mid-range jumper in the Pirates’ 79-38 loss to the Red Raiders in Lowville on Friday. Philip Sanzo/Watertown Daily Times

LOWVILLE — To build on a 20-0 run in the first half, Aidan Macaulay rebounded an errant Harrisville 3-pointer and, as he fell out of bounds, heaved it to his brother, Gavin, down on the other end of the court.

With plenty of room, Gavin Macaulay fielded his twin brother’s pass and completed the play with an easy layup. What would arguably be play of the year for some teams was just another two points for Lowville (2-0).

That same play could have been occurring in sectionals, which, in a normal year, would be happening right about now. Instead, it occurred in Lowville’s first home game of the year, and its second game of an eight-game season. At the end, the Red Raiders notched their second win, 79-38, over the Pirates (2-1).

“We had kind of broken it open and we were on a big run at that point, it’s kind of like the game is flowing and then all of a sudden you hit another big play and it keeps the energy up,” Aidan Macaulay said. “It’s big in that regard. Those are definitely the most fun plays because not everyone can do those kind of plays, and especially connecting with (Gavin) was pretty good.”

Aidan Macaulay finished with 13 points while Gavin finished with 18. However, the Red Raiders were led by Aidan Zehr, whose six 3-pointers fueled his 27-point performance.

Prior to the game, Zehr was one of six seniors to be honored on Senior Night, and event that was never guaranteed.

“It was great, I didn’t really know if I was going to have a senior night for my varsity career,” Zehr said. “But it was really fun.”

The other seniors honored were Aidan and Gavin Macaulay, Erik Gronowski, Alex Zubrzycki and Peyton Munger.

Typically, a matchup between a Class B team and a Class D team would leave most uninterested.

But Lowville wasn’t the only team on the court Friday with a championship pedigree. Two years ago, the day after the Red Raiders fell to Glens Falls in the Class B state title game, Harrisville topped Oppenheim-Ephratah/St. Johnsville to capture the Class D title, its first.

Harrisville, while missing a few key players from that 2018-19 team, showed why they’re championship caliber.

“They were really in shape,” Zehr said. “We don’t usually play teams in the Frontier League that as in shape as us and can keep up with us somewhat.

The Pirates were led by senior Nate Schmitt, finishing with 17 points. Harrisville only led once, going out to a 6-2 edge before Lowville charged ahead.

According to Schmitt, the Pirates couldn’t quite keep up with Lowville. Nevertheless, Schmitt enjoyed the opportunity to play in a game between two of the state’s best.

“It’s fun to play good competition,” Schmitt said. “We didn’t play the greatest today, but everybody showed that they’ve got a little bit, and we just want to go harder and faster. It just makes us work on everything a little bit quicker than what we normally would.”

As the scoring difference between the two teams grew, Lowville coach Zach Shambo began to play more of his second stringers. At one point the five boys on court consisted of four second-stringers and starter Brody Brown, a sophomore who will undoubtedly play a major role for the Red Raiders in the future.

Cody Powis scored 12 of his team-high 15 points as the Golden Knights topped the Beavers in Copenhagen.