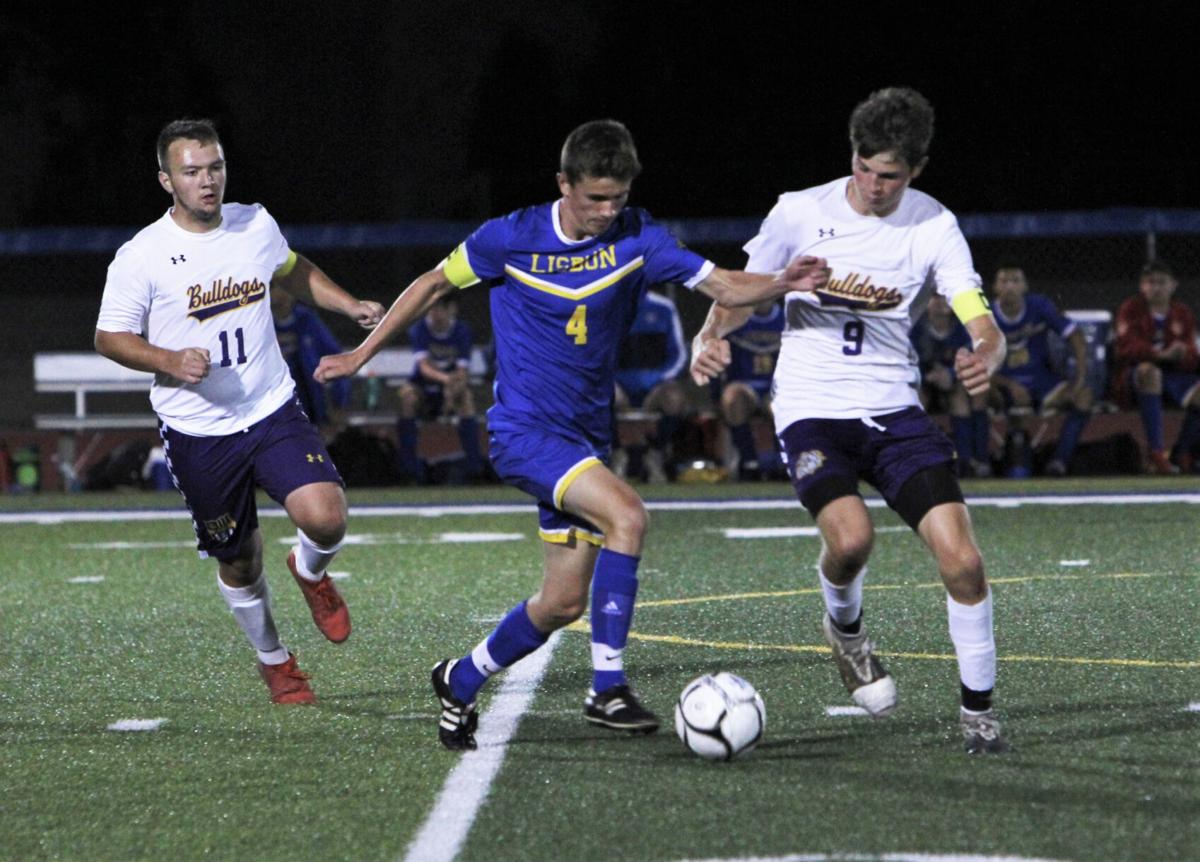 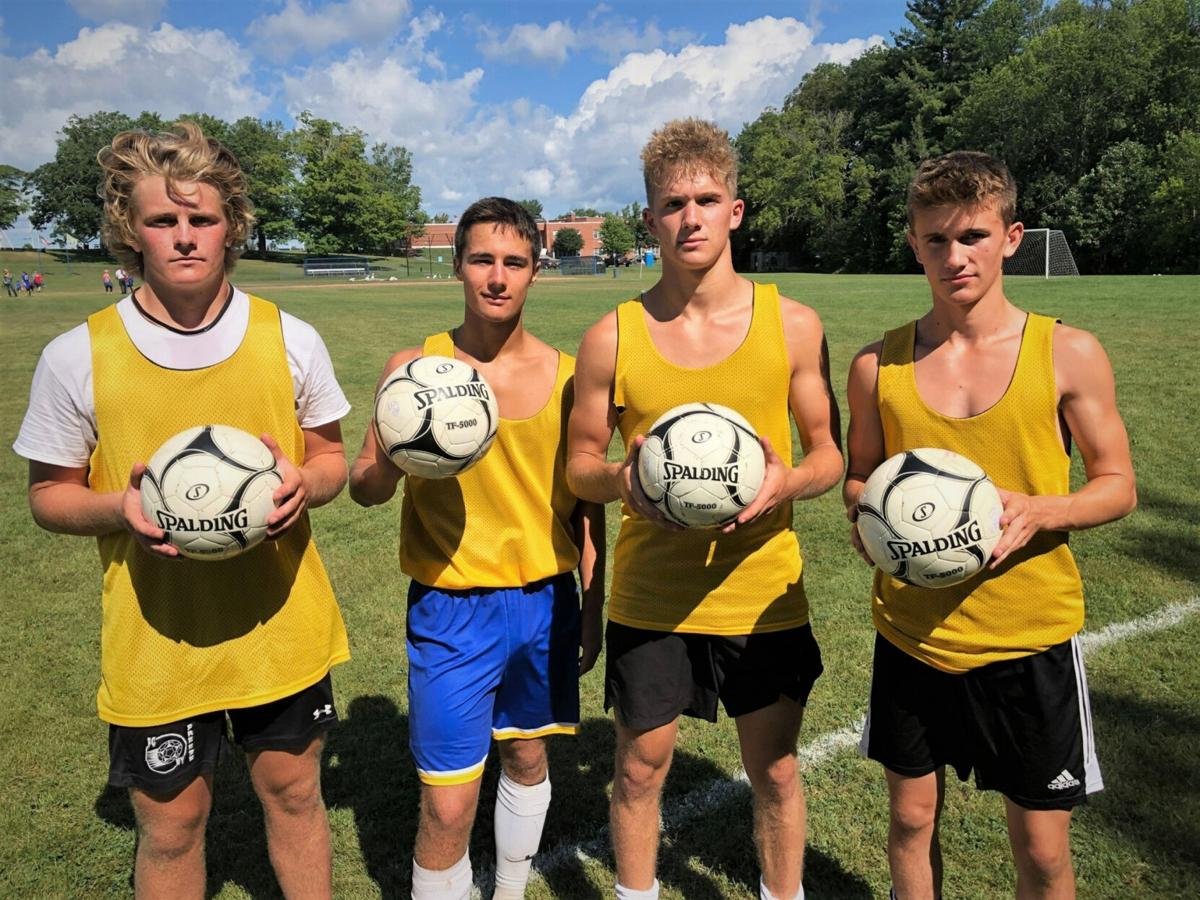 Lisbon seniors from left Griffin Walker, Miles Gendebien, Ben LaRock and Chase Jacobs are ready for the challenges of their final season together. Dave Shea/The Journal 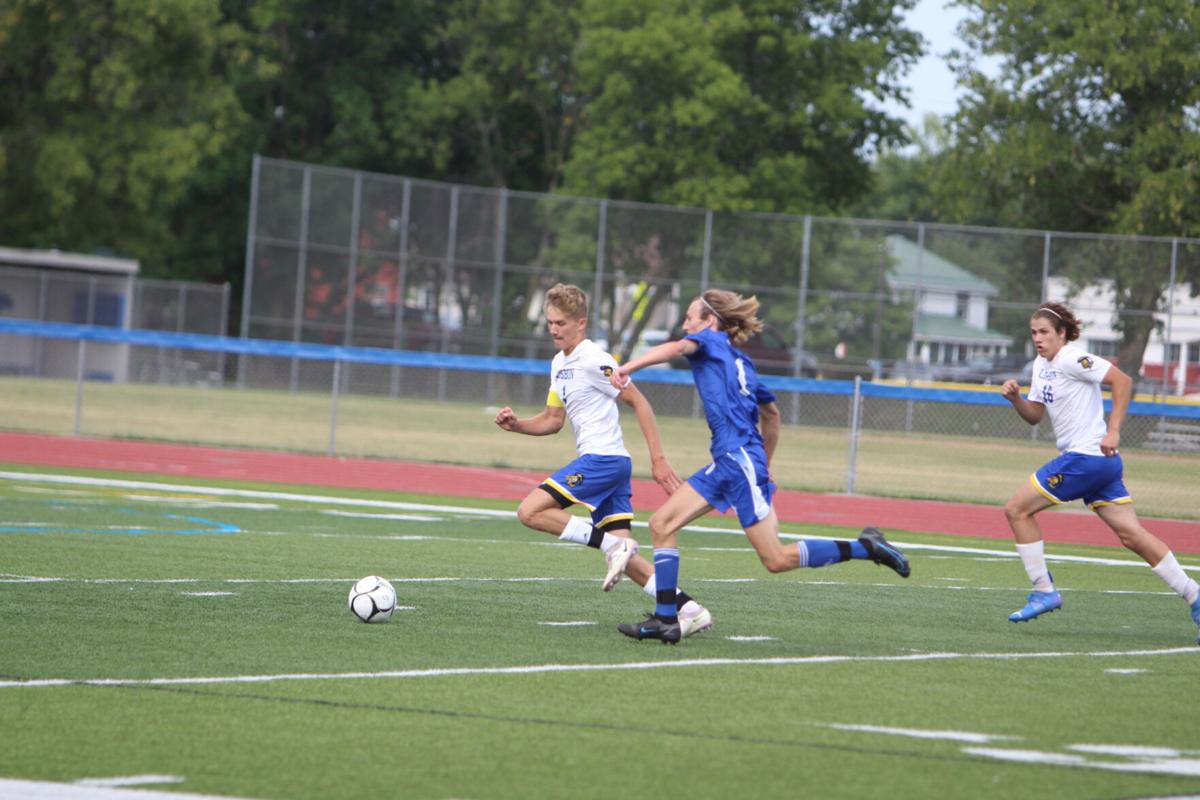 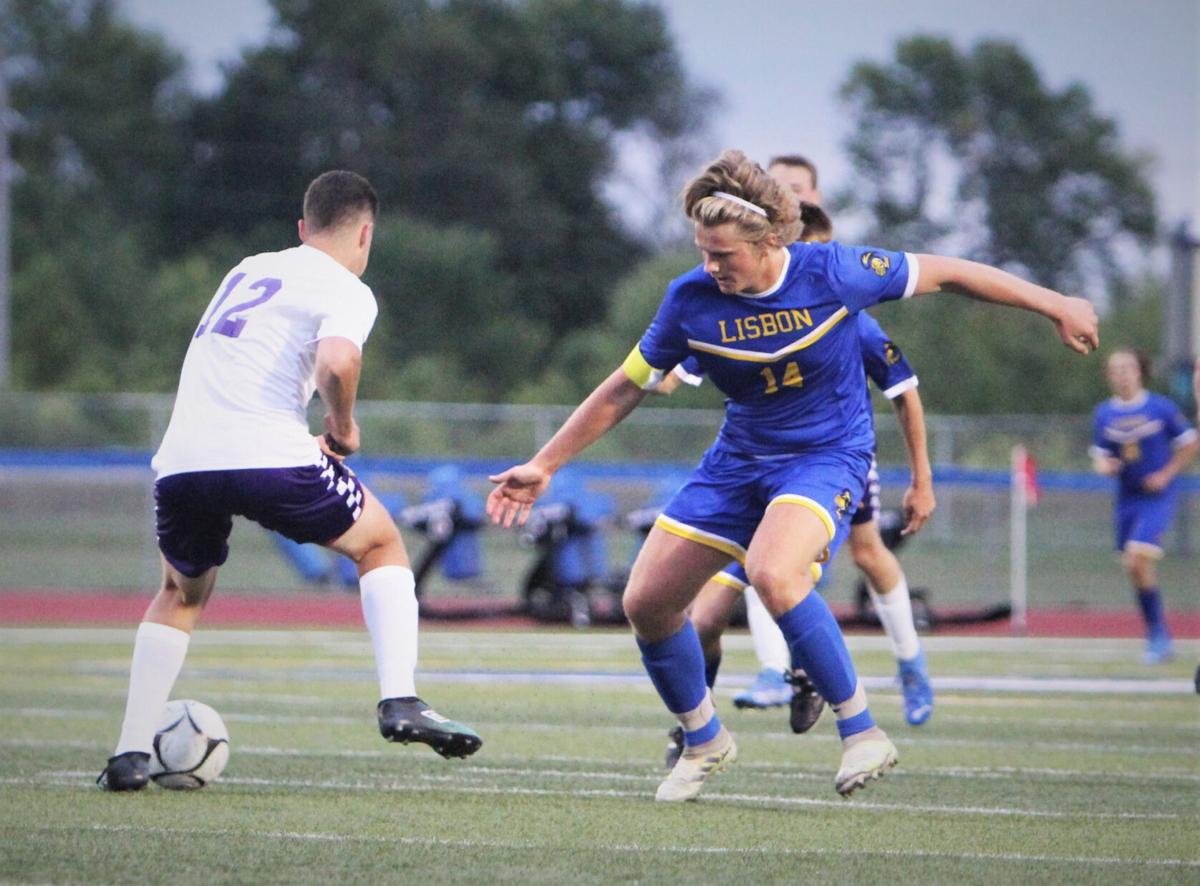 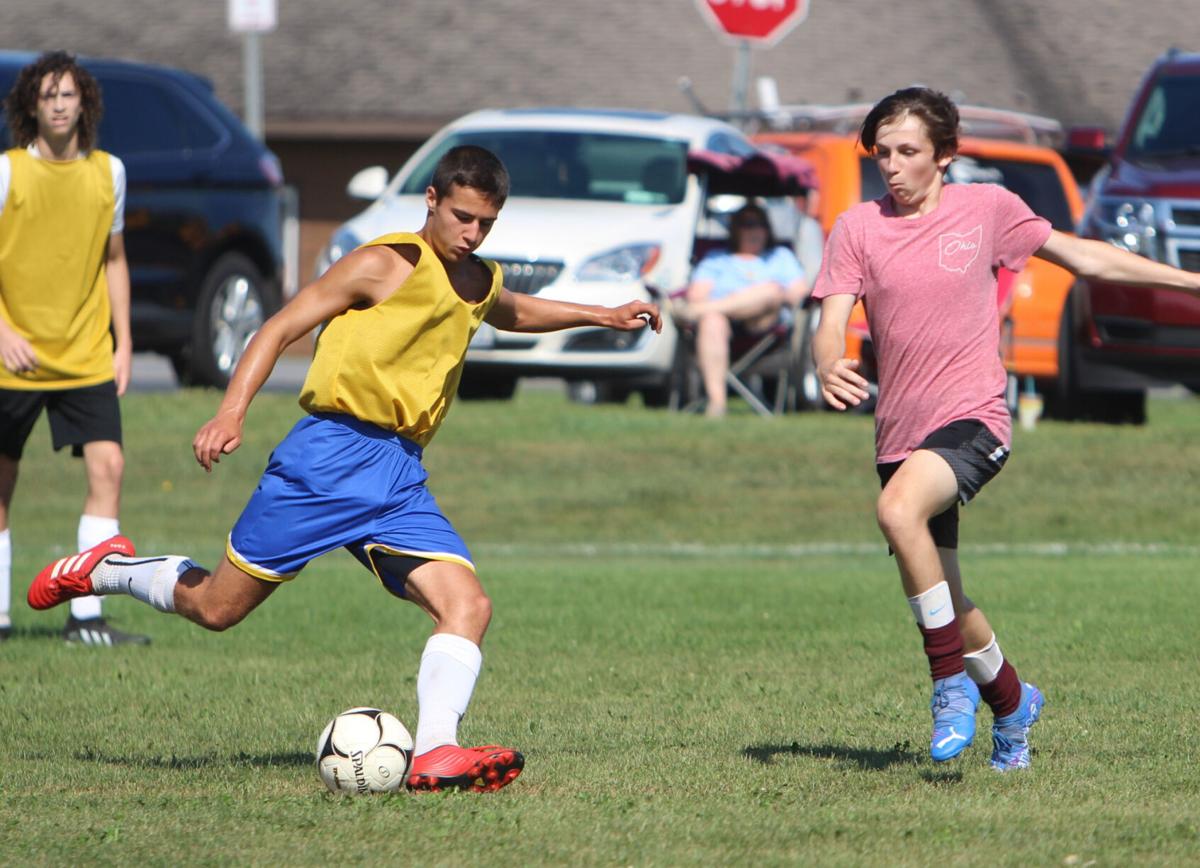 Lisbon senior Miles Gendebien plays the ball in a scrimmage against Chateaugay prior to the season. Dave Shea/The Journal

Lisbon seniors from left Griffin Walker, Miles Gendebien, Ben LaRock and Chase Jacobs are ready for the challenges of their final season together. Dave Shea/The Journal

Lisbon senior Miles Gendebien plays the ball in a scrimmage against Chateaugay prior to the season. Dave Shea/The Journal

After winning the Gerry Cring Memorial Boys Soccer Tournament at Ogdensburg Free Academy for a second straight year on Thursday, Lisbon stands at 28-1-1 in the last three seasons under the direction of coaches Diky Marcellus and Kelley Geary.

The senior foursome of Ben LaRock, Miles Gendebien, Chase Jacobs and Griffin Walker have played active and significant roles throughout the run, which produced a 19-1 2019 season.

Junior stopper Isaac LaRock quickly added another dimension to the team’s leadership core and was honored as the MVP of the OFA Tournament.

The Knights won the NAC West and Section 10 Class D titles in 2019, allowed only six goals and won 19 straight games before dropping a 1-0 decision to Section 7 champion Chazy in the state regionals.

Coach Marcellus considers himself lucky to preside over such a run, coach so many talented players and to have four seniors together who play at such a high level.

“I may be biased but I think Ben, Miles, Griff and Chase all have the potential to be considered for all-state honors at the end of the season,” Marcellus said. “They play phenomenal soccer, they put a lot time into soccer and their leadership and work ethic make the other players work hard to get better.”

Marcellus continued: “At sweeper Ben is the best defender in the league. Miles and Griff will play at halfback and up front and can basically play anywhere, and Chase Jacobs is so strong and aggressive with a great shot. I remember when he was a sophomore, he was small and got pushed off the ball by stronger players but he never backed down.”

The end of the 2019 winning streak came in a contest that Marcellus believes they could have won.

“We really played well and we had the better of the play but Chazy was a great team and they got the goal. That is just the way it goes in soccer,” he said.

The Knights came out of the loss determined to make it back to the regionals but they never got the chance as the COVID-19 pandemic limited the 2020 season to 10 games with no sectionals or state tournament. Lisbon’s season was even further limited by a quarantine.

All four seniors have also enjoyed success in other sports but had the opportunity for state tournament play taken away.

LaRock and Griffith are also the right- and left-handed pitching combination for the baseball team that made the state Class D Final Four in 2019 but had their 2020 season canceled. Last spring the Knights won Class C but there was no state tournament.

Gendebien ran on two Section 10 Championship relays for the Canton track and field team last spring but their was no state championships. Jacobs helped the OFA hockey team to a Section 10 title in 2019 and also plays lacrosse through a merger agreement.

All of the adversity has made the Golden Knights’ seniors determined to make the most of their final season together.

“I guess you say it is unfinished business but our primary goal in to win Section 10. And we know it won’t be easy,” Gendebien said.

“There are so may good teams in our division and more in Class D,” he added. “We are always going to get everyone’s best shot. But we are ready, we have a lot of players who can really play well and we started to come on as a team in our final scrimmage.”

Ben LaRock also believes that his team has the potential to meet every challenge, and has accept a personal challenge, despite some nagging injuries, to make a new look defensive backfield as good as last year’s group.

“I feel pressure but that’s good. It is my job to help our first year starters on the outside get better. and they have shown me that they will,” LaRock said.

Walker is looking to replace the energy and forceful and skillful presence of graduated Jackson LaRock in the midfield.

“Jack was great to play with and I learned a lot from him. He had a great work ethic and just never stopped,” said Walker. who hopes to pitch in college.

“I really want us to win this year and go places. I would love to play against Chazy again,” he added

Coach Marcellus was frank in the preseason that his team would need to improve in the finishing end of the offense, and Chase Jacobs filled the bill in the tournament. Scoring off his strong shot and assisting goals with direct kicks and crosses, including corner kick to set up a textbook set play header by Isaac LaRock.

He spoke of the need for the intangibles and constant communication.

“Team chemistry will be extremely important and everyone has to be talking all of the time every day,” said Jacobs, who plans to play soccer at Alfred State next fall.

Lisbon will compete in a very strong NAC West. Morristown, boosted by a merger with Hammond, has started 3-0 and won the Colton-Pierrepont Tournament. Hermon-DeKalb shows a strong senior core, and Heuvelton and Harrisville showed signs of their potential early.

The NAC Central will showcase parity from top to bottom with tough, physical and close games the norm every day.