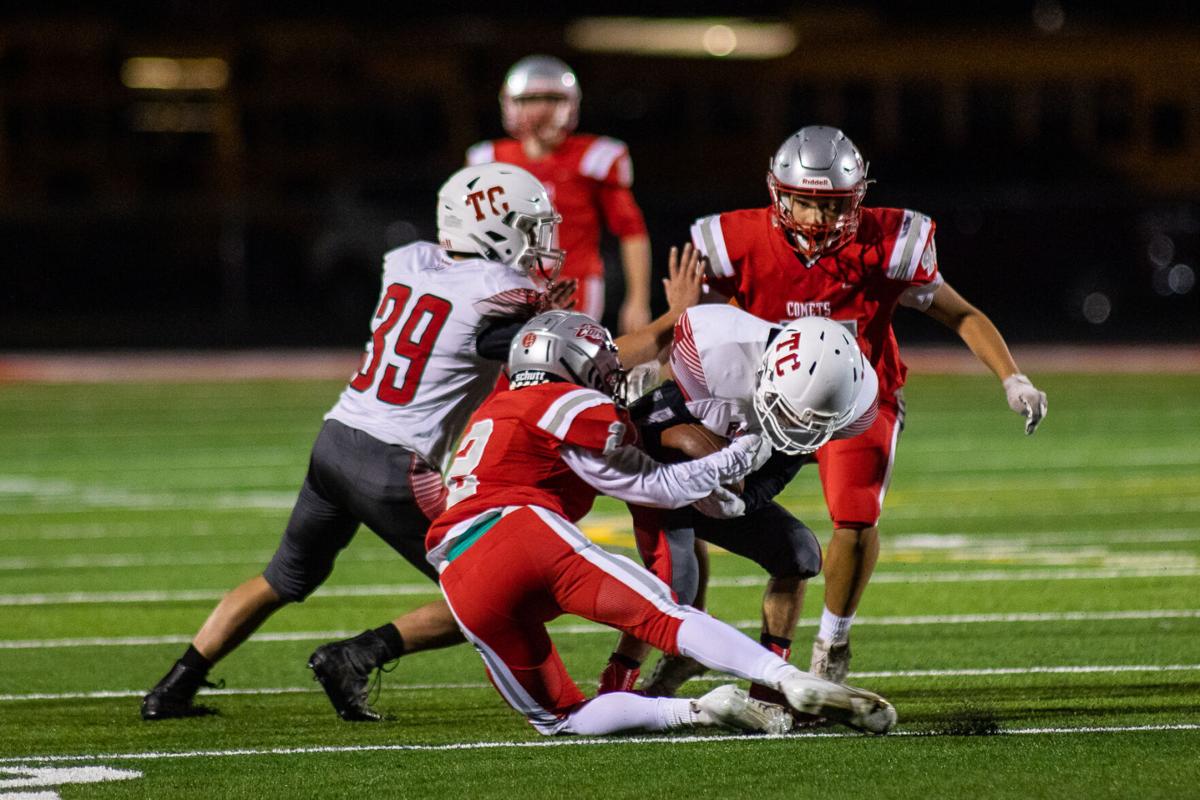 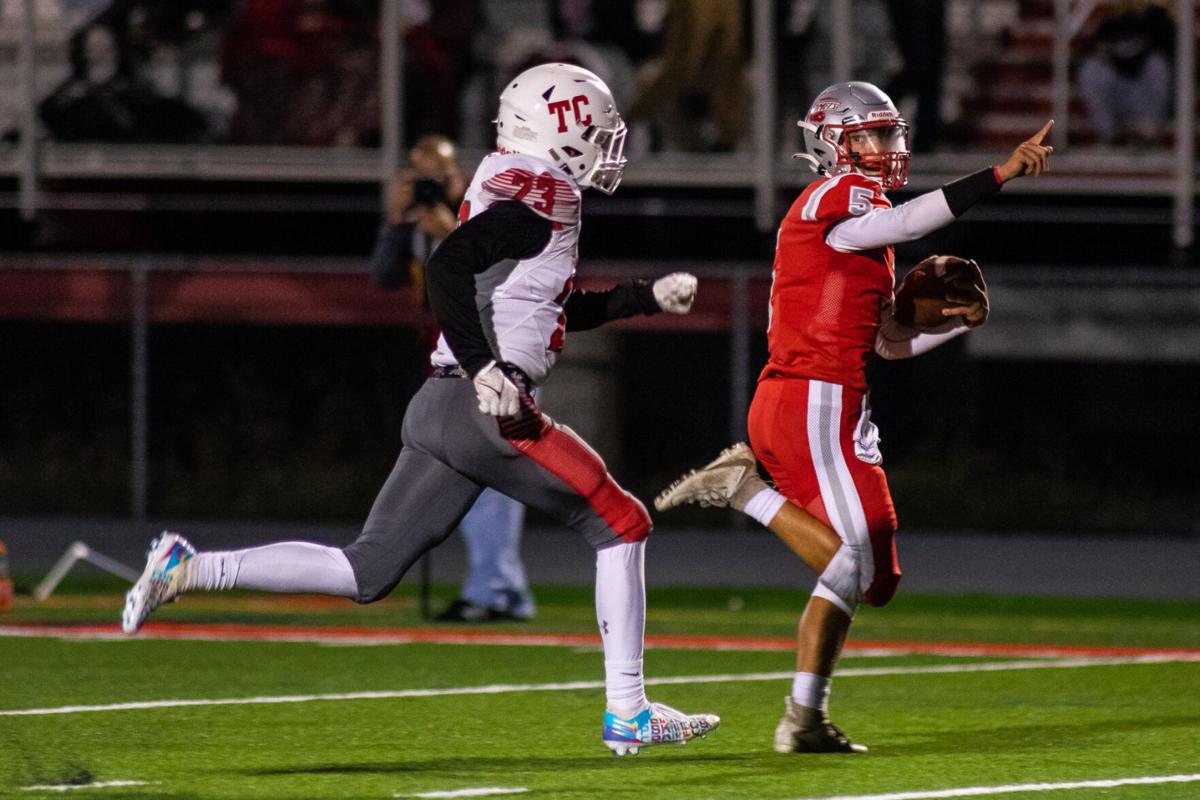 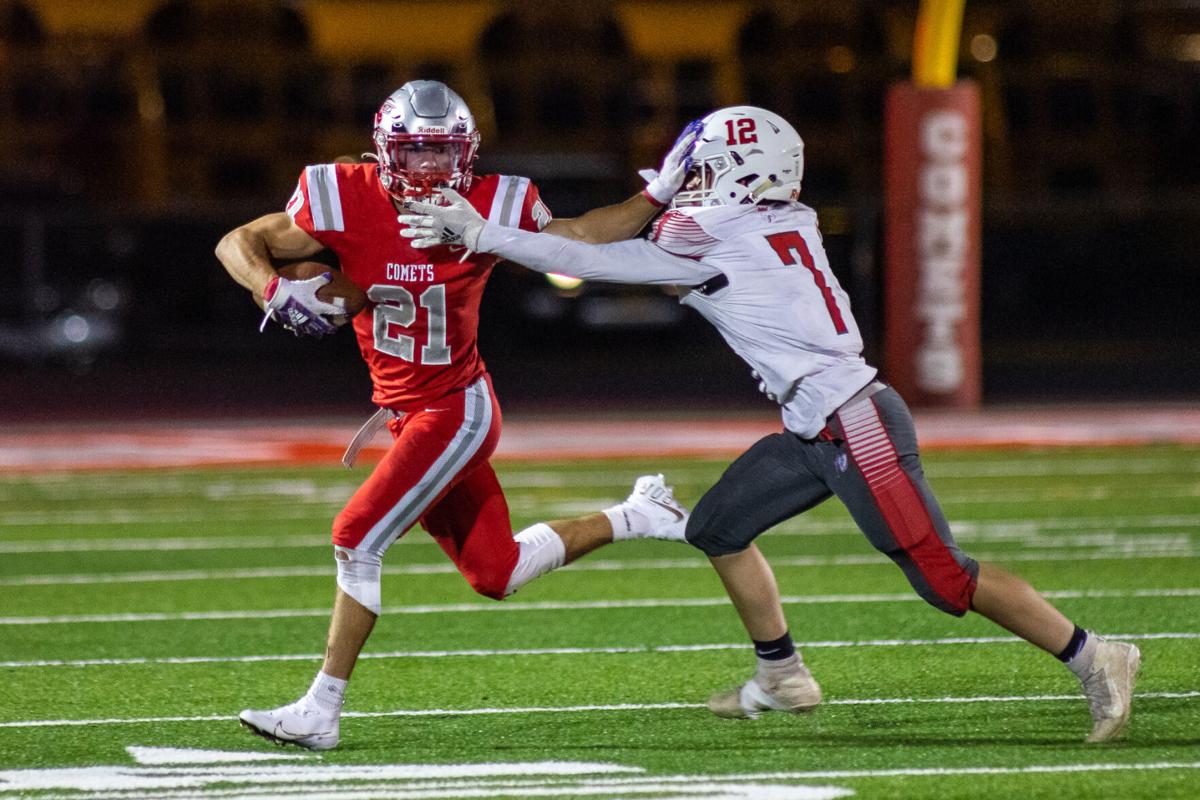 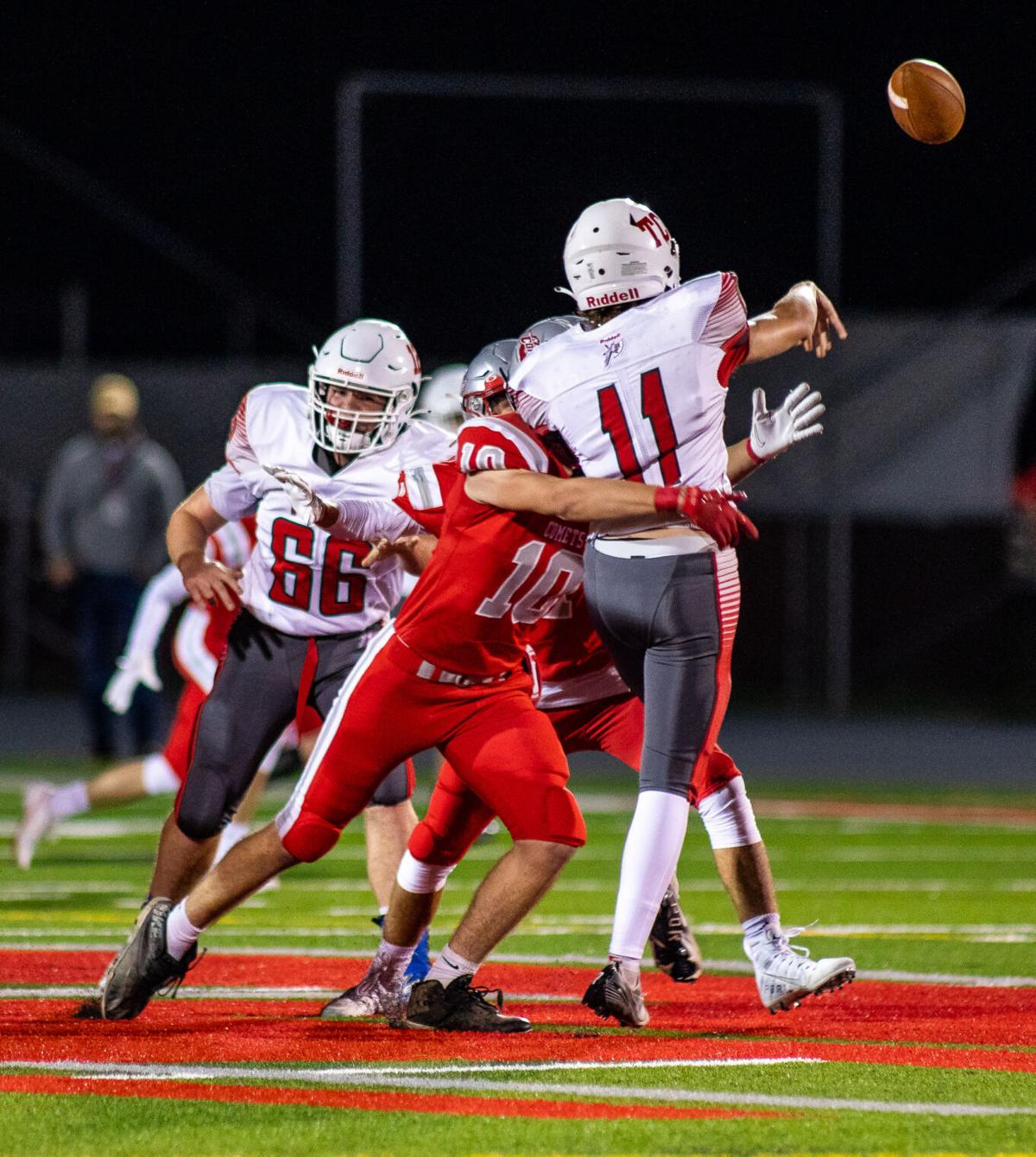 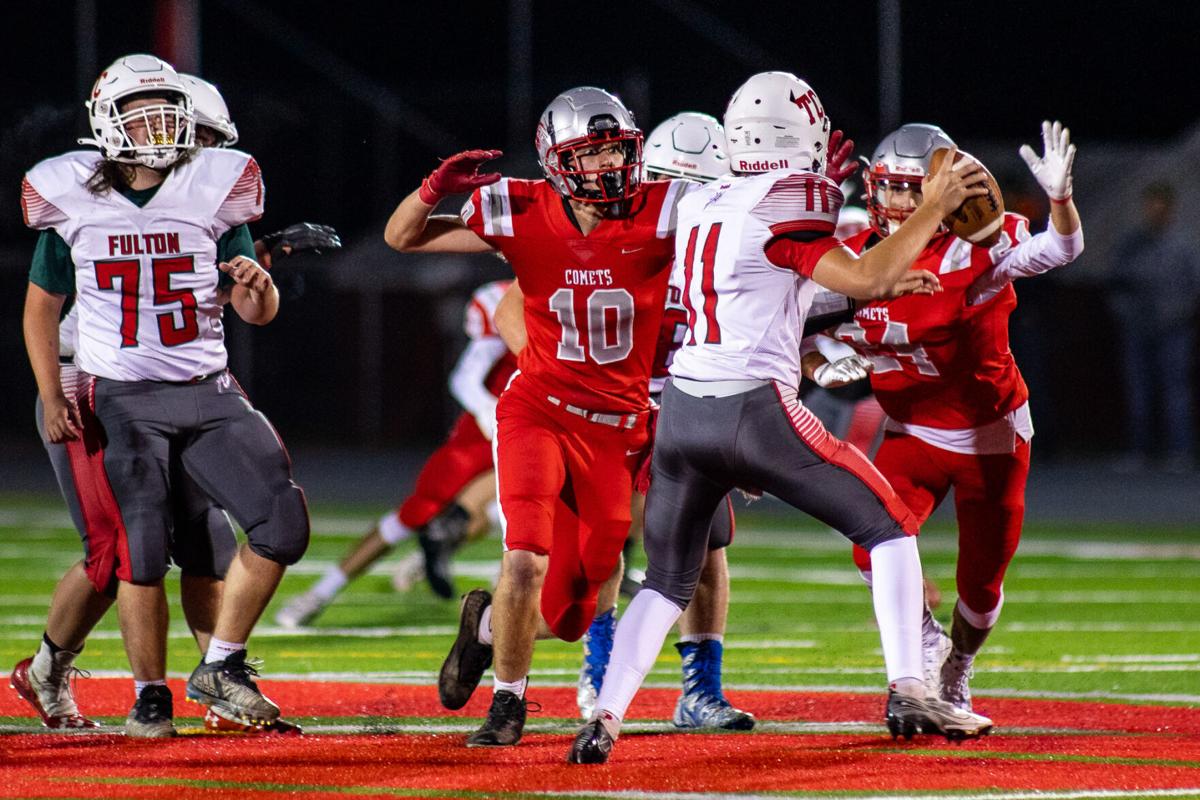 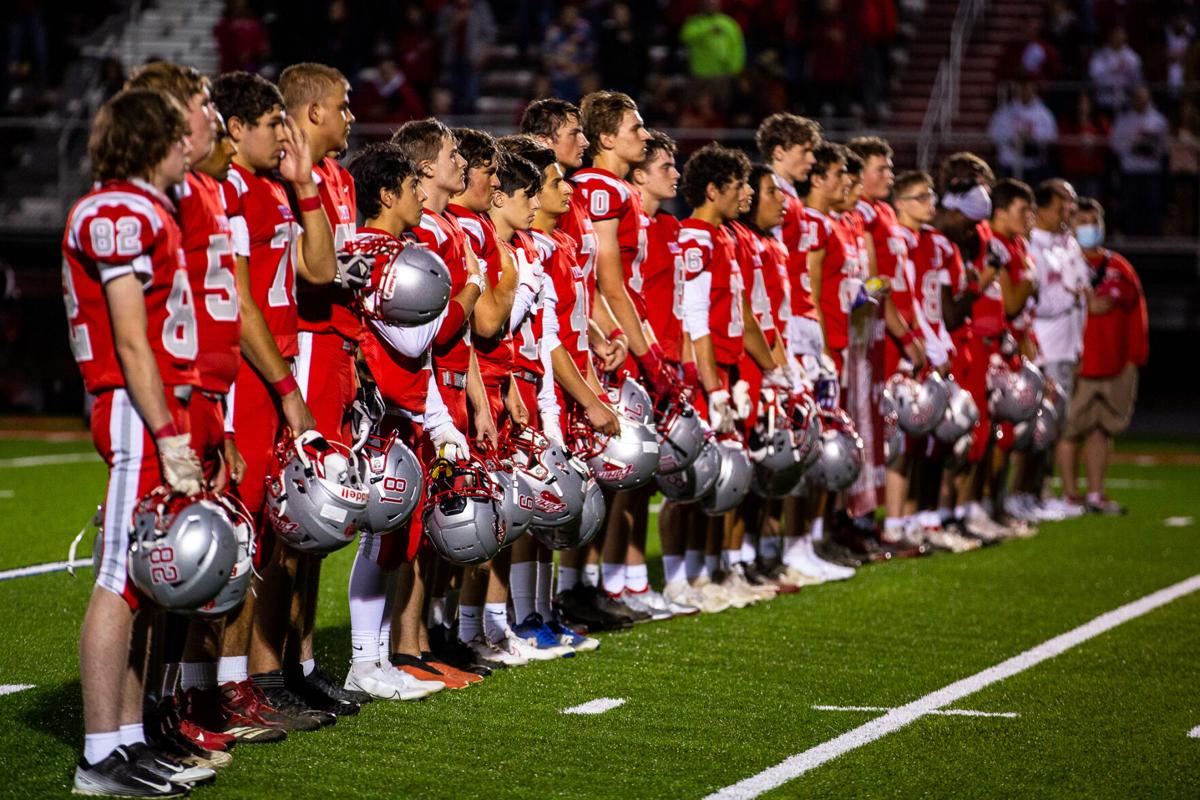 The Carthage Comets stand for the National Anthem before Friday night’s game against Fulton in Carthage. Kara Dry/Watertown Daily Times 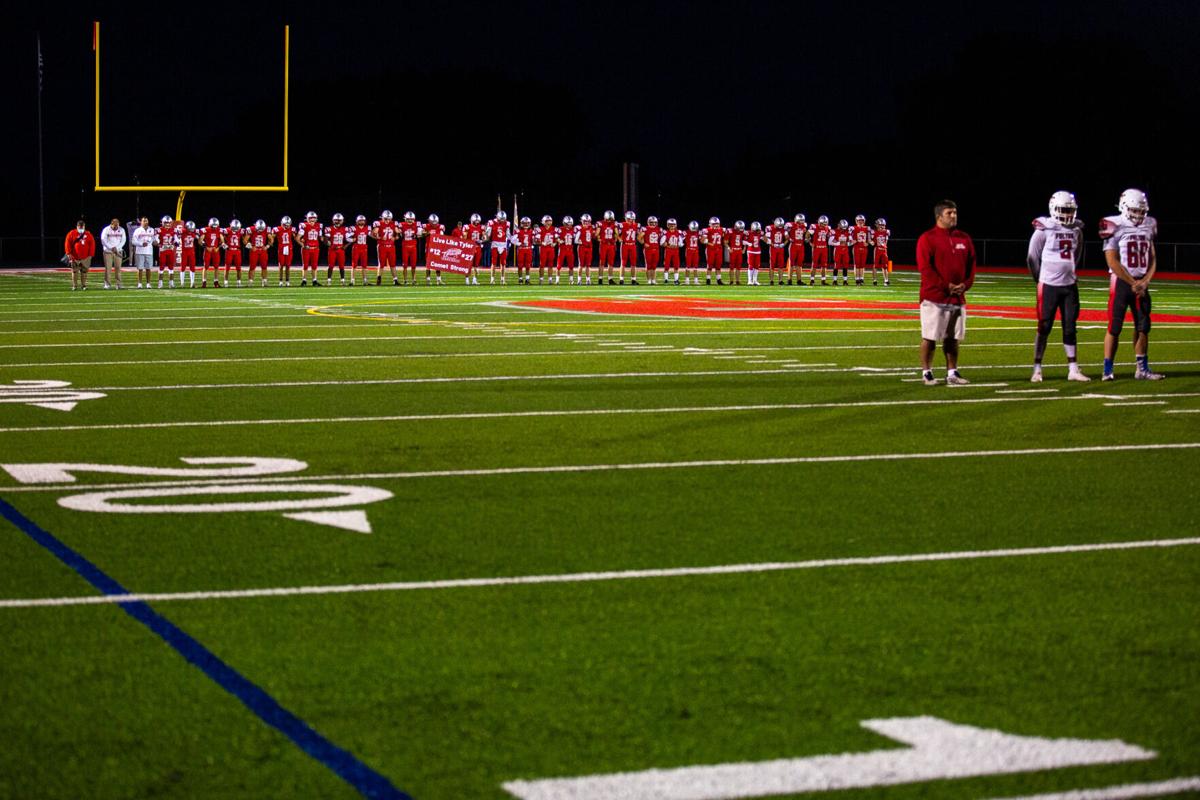 The Carthage Comets hold a banner for Tyler Christman during a moment of silence held in his honor before Friday night’s game against Fulton in Carthage. Kara Dry/Watertown Daily Times 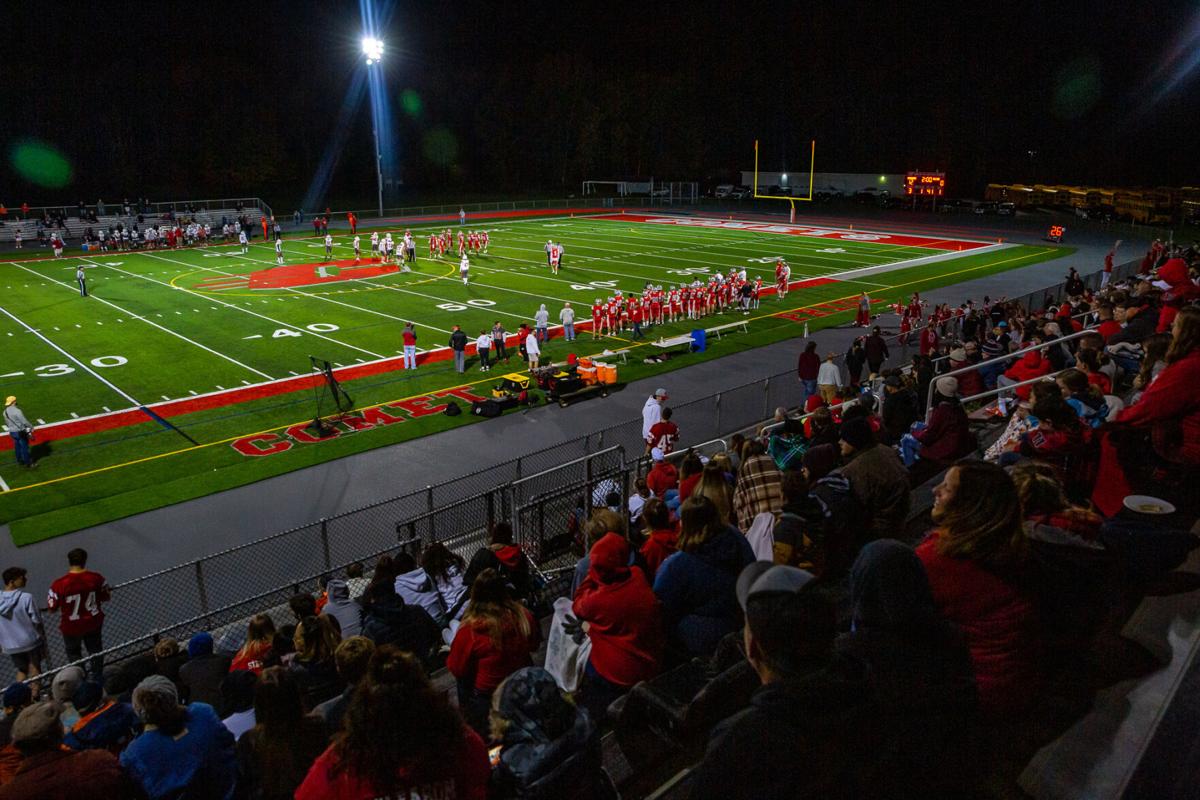 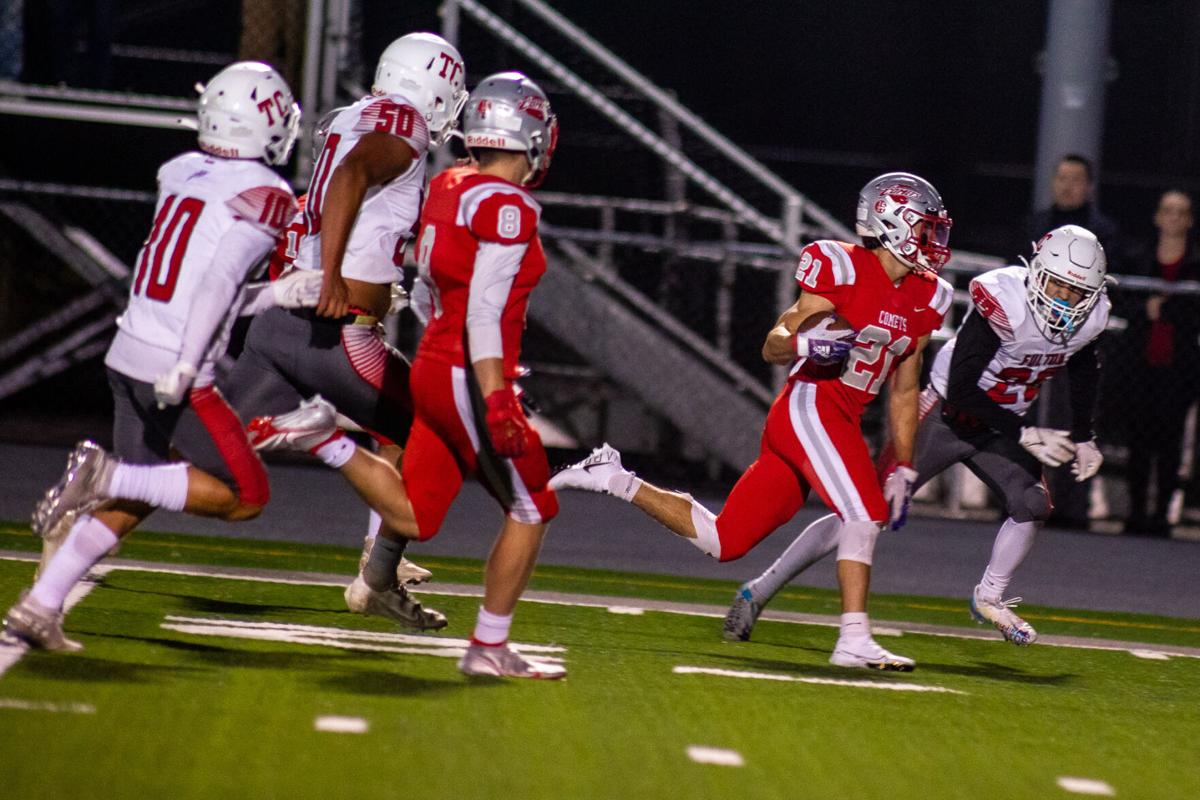 Carthage’s Carter Kempney runs for a touchdown in the first quarter of Friday night’s game against Fulton in Carthage. Kara Dry/Watertown Daily Times 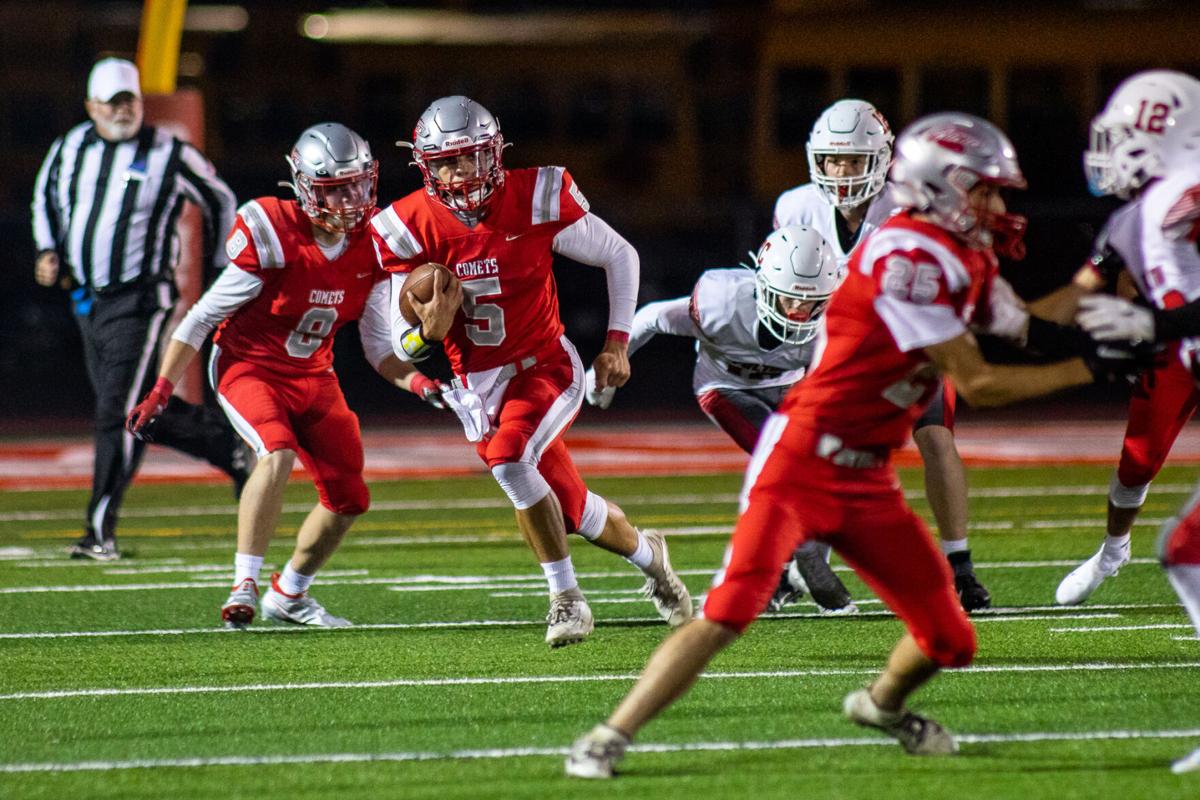 Carthage’s Lincoln Escudero runs the ball for a first down in Friday night’s game against Fulton in Carthage. Kara Dry/Watertown Daily Times 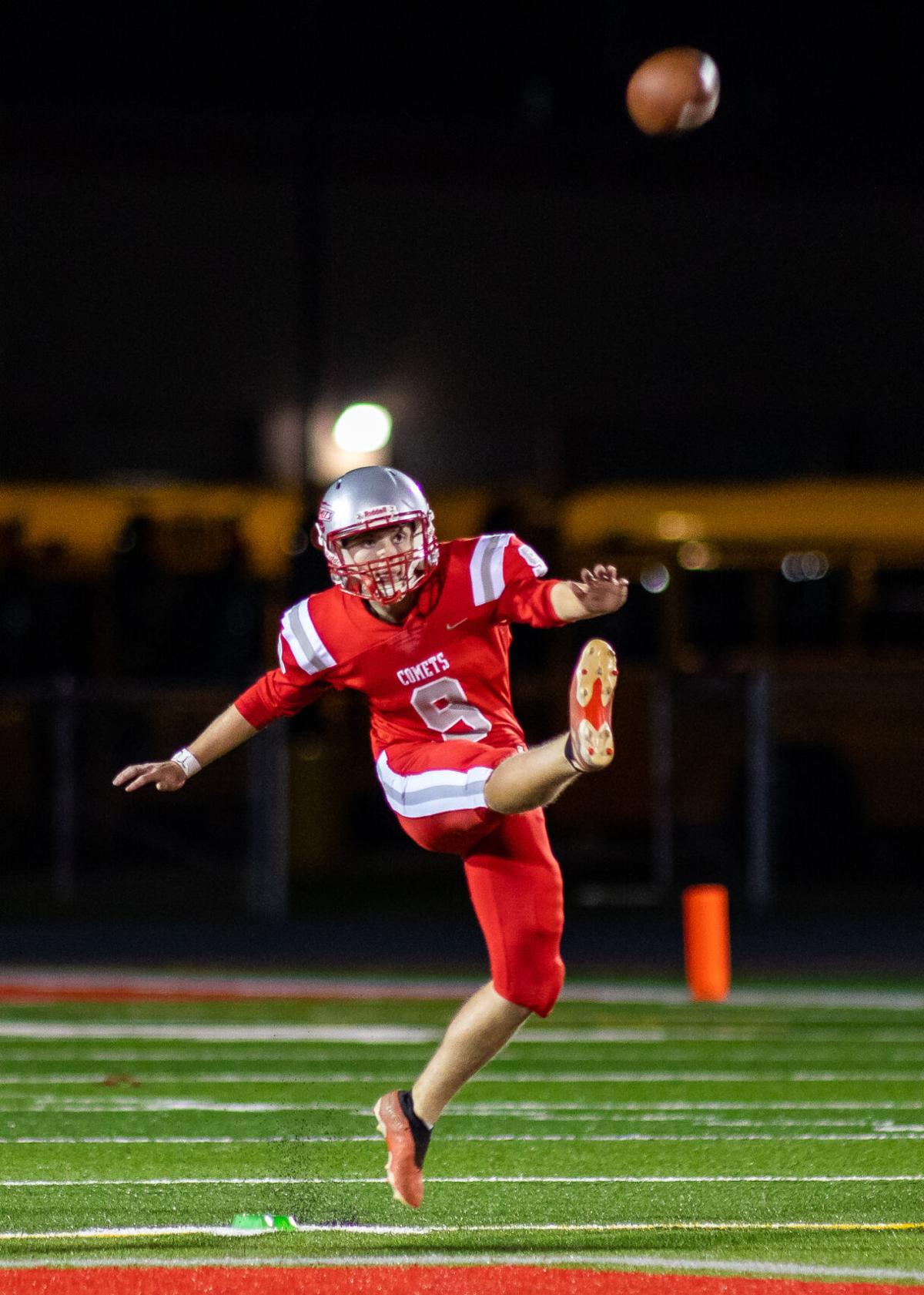 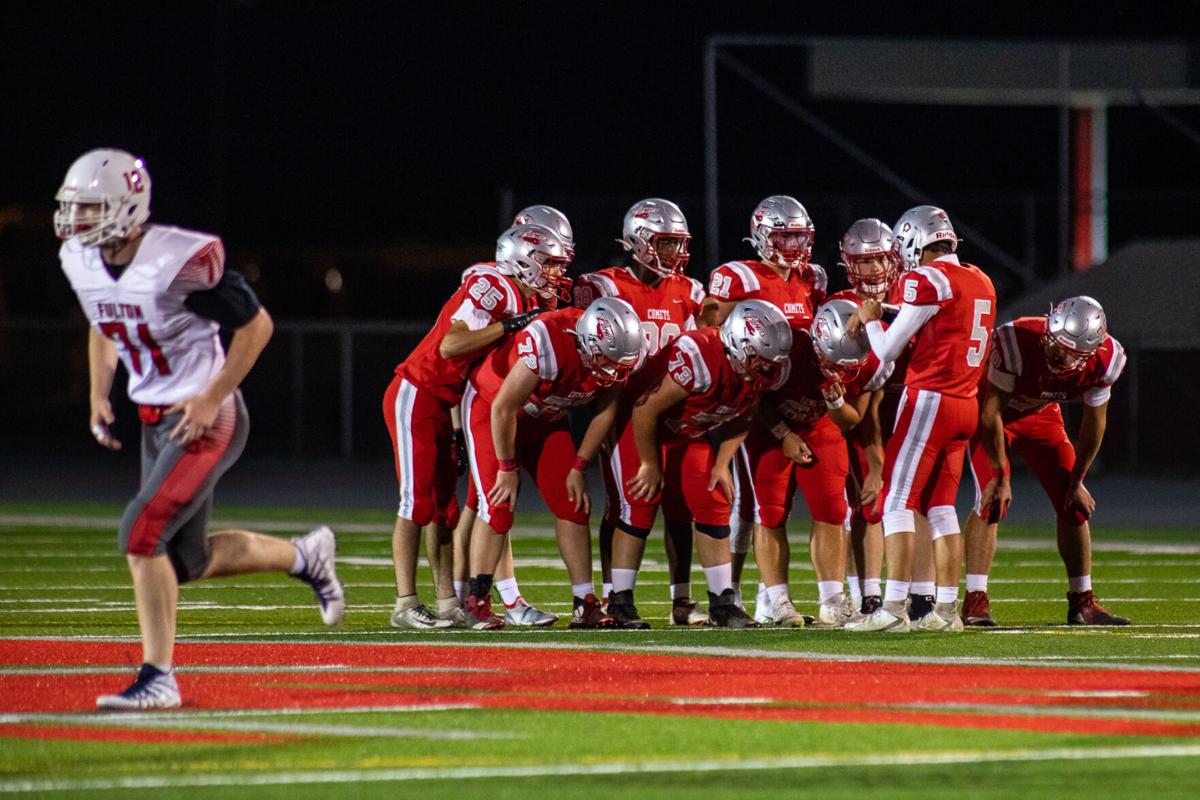 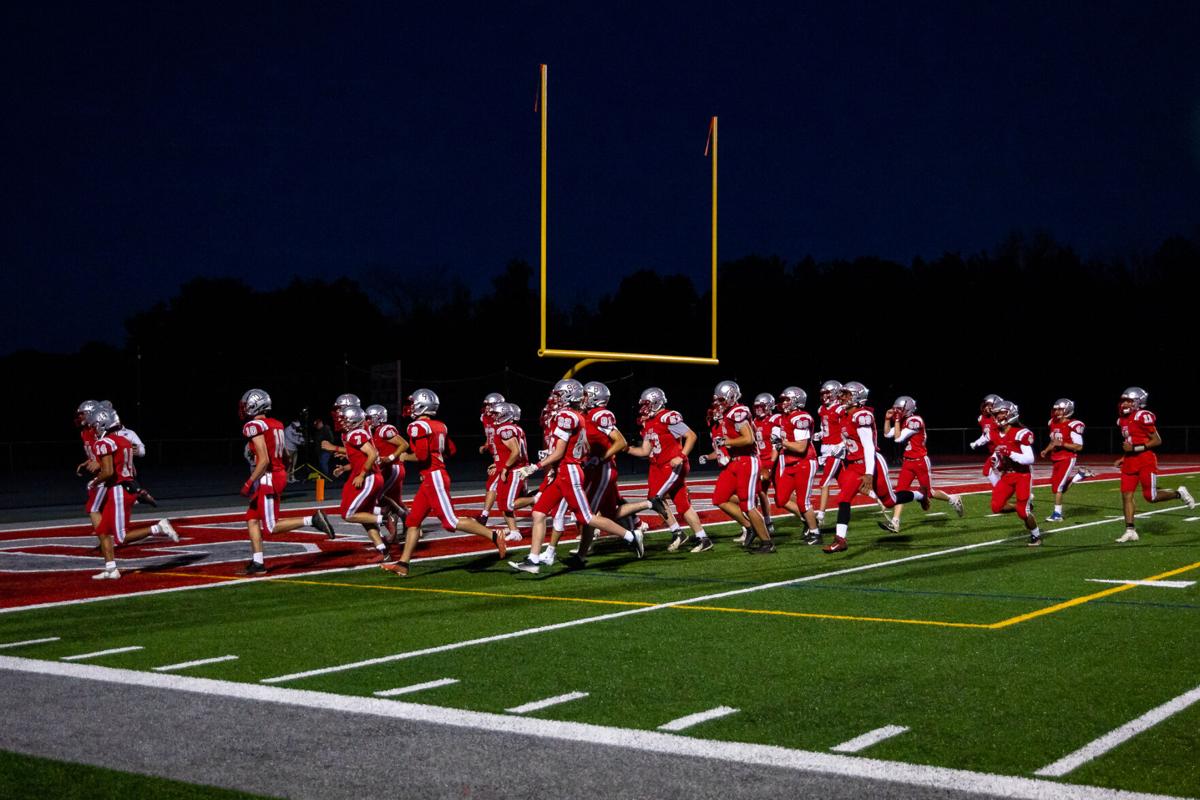 The Carthage Comets head to the locker room before taking the field on Friday night against Fulton in Carthage. Kara Dry/Watertown Daily Times 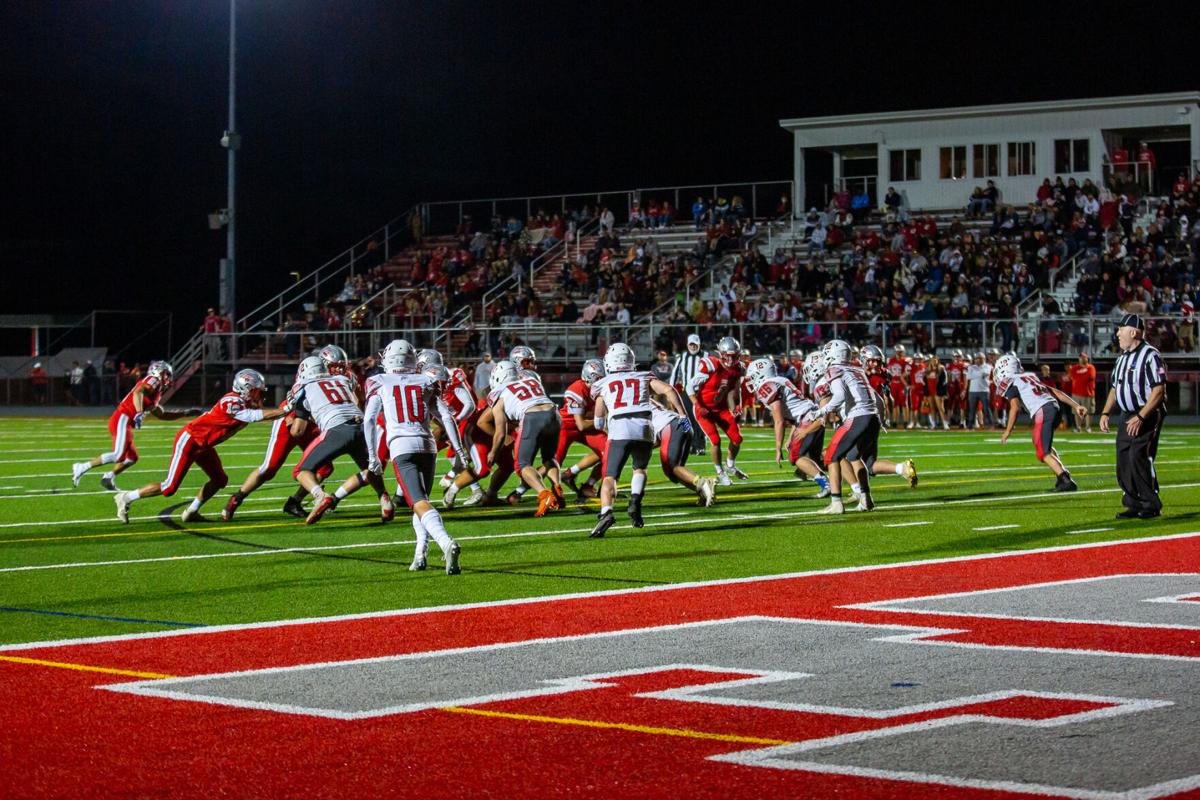 The Carthage Comets stand for the National Anthem before Friday night’s game against Fulton in Carthage. Kara Dry/Watertown Daily Times

The Carthage Comets hold a banner for Tyler Christman during a moment of silence held in his honor before Friday night’s game against Fulton in Carthage. Kara Dry/Watertown Daily Times

Carthage’s Carter Kempney runs for a touchdown in the first quarter of Friday night’s game against Fulton in Carthage. Kara Dry/Watertown Daily Times

Carthage’s Lincoln Escudero runs the ball for a first down in Friday night’s game against Fulton in Carthage. Kara Dry/Watertown Daily Times

The Carthage Comets head to the locker room before taking the field on Friday night against Fulton in Carthage. Kara Dry/Watertown Daily Times

CARTHAGE — On an emotional night, Carthage honored fallen comrade Tyler Christman the best way it could Friday, by simply playing a football game.

And the Comets took it one step further by delivering a dominant victory in playing their first game in three weeks.

Carter Kempney, Lincoln Escudero and Josh Bigelow each scored a pair of touchdowns as Carthage rolled to a 54-19 triumph over Fulton in a Section 3 Class A National Division game at Comet Field.

The game was played after the community honored Christman, a 14-year-old Carthage student who died on Sept. 21 after suffering a severe brain injury during a junior varsity football game at West Genesee three days before.

“The whole team, obviously that was one of the hardest things we’ve ever been through,” Kempney, a senior running back, said. “And for a lot of us that was one of the first times someone close to them has ever passed away. So tonight we wanted to pay tribute to him and we all came out as a family and played as hard as we could.”

In a poignant pregame ceremony, 12 minutes and 27 seconds was put up on the scoreboard, with the two numbers representing Christman’s uniform number and favorite number, respectively, and during a moment of silence, the 27 seconds was run off the clock in honor of the teen.

“It really was emotional tonight,” Carthage coach Jason Coffman said. “Tyler was such a great kid and to go through what these kids have gone through, and to be able to bounce back and put it together and play together as a team. And put some emotions on the backburner and bring other emotions right to the forefront was really amazing. It speaks to the character and the resiliency of the kids.”

“I was so glad that we had that moment, because Tyler definitely deserved it,” Kempney said.

The Comets (1-1 overall, 1-0 division) then found some catharsis on the playing field by scoring on all five of their possessions in the first half to take command.

“He was my friend,” Bigelow, a junior running back, said of Christman. “So we just had to come out and get it done, which we did.”

“It was tough as a whole team, playing after our first loss and the loss of a teammate,” Escudero, a senior quarterback, said. “It was really hard to come back and play as a team, but we all came together and played well.”

Carthage generated two touchdowns on their first six plays from scrimmage as following a Fulton punt, three plays later Kempney broke free down the right sideline for a 54-yard touchdown run and a 6-0 lead.

Then three plays after another punt, Escudero burst through the middle on a 48-yard scoring run and Carthage led 12-0 with 4:44 left in the first quarter.

On the Comets’ next drive, Bigelow got into the act by busting free for a 48-yard scoring scamper of his own. After he ran in the conversion attempt, Carthage led 20-0 with 1.7 seconds left in the quarter.

Fulton (0-3, 0-2) responded with William Patterson’s five-yard scoring run in the second quarter, but on the Comets’ next possession, Kempney scored on a 19-yard run for a 28-7 lead with 5:31 left in the first half.

After the Red Raiders struck for another score on a 25-yard touchdown pass from Tyler Mills, Escudero capped the scoring with 50-yard scoring run, and Carthage led 34-13 at halftime.

“It felt great to be back on the field, everyone was so excited,” Kempney said. “Right when we got in the locker room there was energy and that’s all we needed. And I was glad we could bounce back from what happened.”

Kempney then opened the second half by breaking free for a score on a 78-yard kickoff return.

Escudero led Carthage on the ground with 158 yards on seven carries and a pair of scores, as did Bigelow, who ran for 128 yards on just three carries. Kempney finished with 120 rushing yards and a score on 11 touches.

“It was exactly what we needed, the kids came out and they played hard,” Coffman said. “Our offensive line got things going and sprung our running backs and our quarterback, and we know there’s certain things that we’re going to be able to do well, we’ve got to work on making those things even better and we’ve got to work on and obviously some things that we don’t do well yet.”

Bigelow then added a touchdown later in the third quarter by rumbling for a 73-yard touchdown for a 47-13 lead with 2:57 left.

“Our offense definitely improved since week one obviously, we definitely got better in every way, we just got faster, stronger and proved it tonight,” Escudero said.

The Comets hadn’t played since a loss to Fayetteville-Manlius on Sept. 10, as their last two games, including a matchup against rival Indian River slated for last Friday, were canceled.

“Our community is unbelievable and we come together when we need to,” Coffman said. “And everybody has been supportive of this and it’s one of those things that we’ve rallied around it rather than running away from it. It’s a great family that’s a huge part of our community and our hearts are broken for them, but at the same time everybody else has kind of chipped in and said ‘what can we do? You know what, we’re there for the family and we’ll continue to be there for them.”