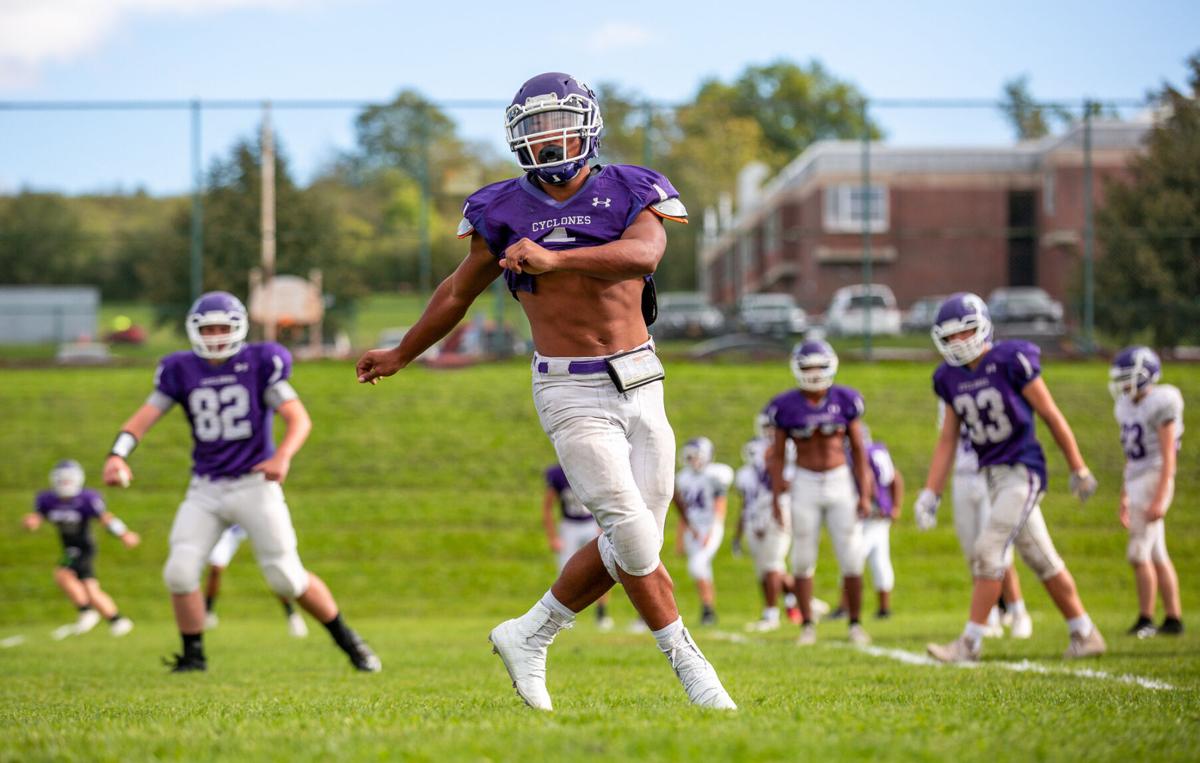 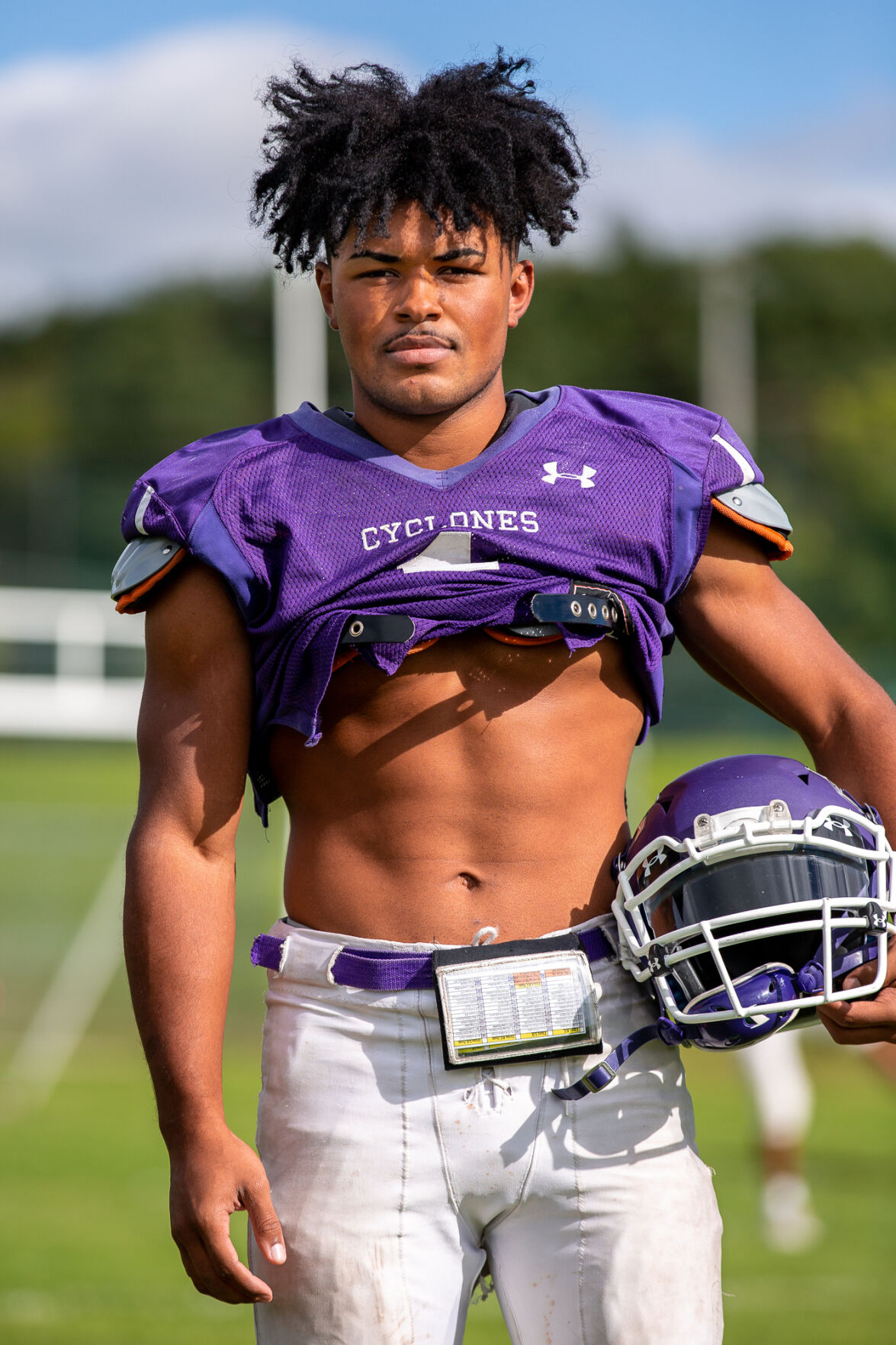 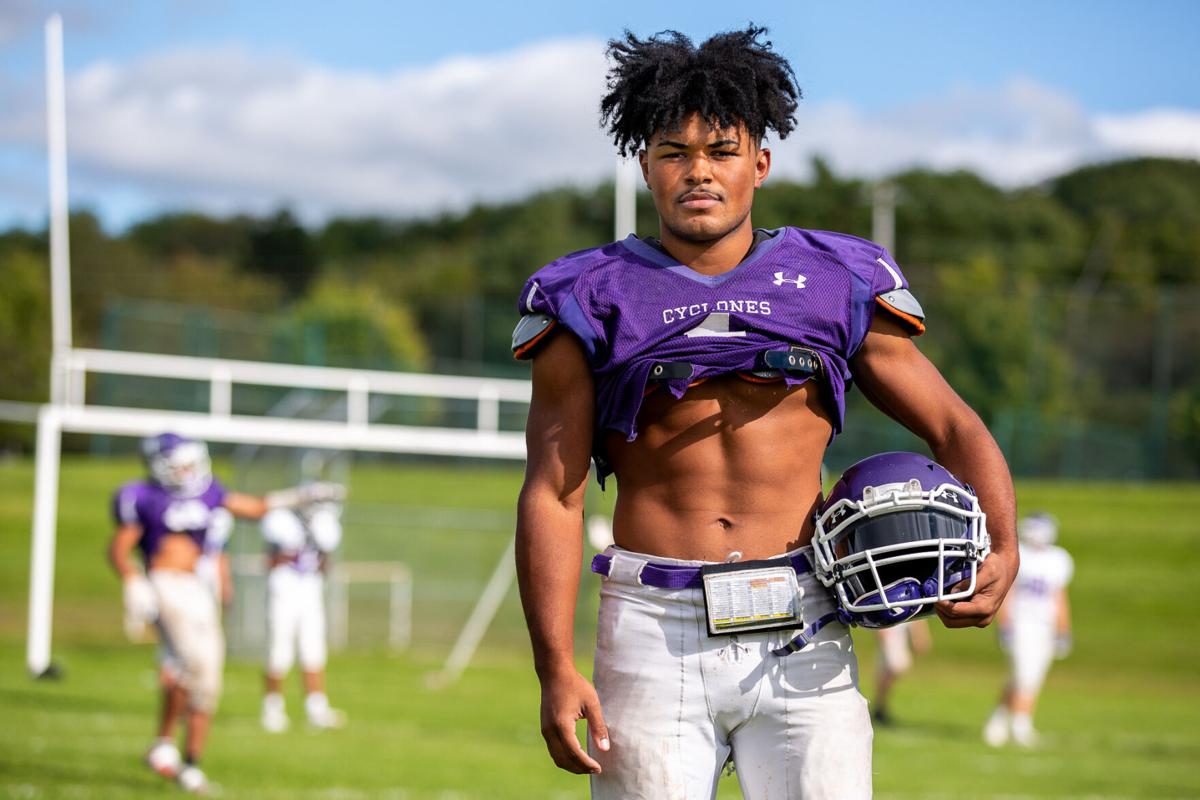 Watertown’s Deante Hall has returned to his natural position at running back after starting his career at quarterback for the Cyclones. Kara Dry/Watertown Daily Times

Watertown’s Deante Hall has returned to his natural position at running back after starting his career at quarterback for the Cyclones. Kara Dry/Watertown Daily Times

“He is going all the time and he’s thinking not first down but touchdown, touchdown and touchdown,” Davis said of Hall, who has already rushed for 250 yards on 20 carries in two games this season for the Cyclones (2-0).

Hall’s rushing average is a gaudy 12.5 yards per carry, that’s better than a first-down average. He also has six touchdowns in two games, including four in last week’s 41-14 Northern Athletic Conference victory over Canton.

“Every single play he’s thinking end zone,” said Davis, who has the pleasure of initiating the handoff to Hall, who then does the rest.

“I love running back, it’s my natural position,” said Hall, who previously played QB in the fall 2019 and spring 2021 seasons.

“It’s great to be in the backfield and I look to burst through an opening,” Hall said. “My blockers have done a great job this season. It’s been a good start so far.”

Besides his teammates, there are others who have noticed his exploits on the field.

“I get compliments ... even from teachers so that makes me feel good,” Hall said.

“Deante takes advantage of the line’s blocking techniques,” Lavin added. “He is super fast and usually turns nothing into something on the field. He can find his way to the end zone. We are looking forward to playing our other NAC opponents.”

Watertown gets a top-notch test Saturday when it plays host to perennial power Gouverneur (2-0) in a pivotal NAC meeting.

Cyclones coach Kyle LaLonde appreciates what Hall has done to date, along with the 14 other seniors, and the juniors have accomplished to be successful against Section 10 opponents.

“I think we are in a better position now with Joel at quarterback and Deante at running back,” LaLonde said. “There’s more diversity. And you can’t argue with the results.

“Both guys are in their third seasons in the system. It helps that we have a lot of veteran players who work hard and want to be successful.

“Myself and the coaching staff are thankful for the work they have put into the program,” LaLonde added. “Also, a lot of other players have definitely stepped up for the benefit of the team.”

Watertown won the Section 10 Class A championship against Canton in 2019, and will face the Golden Bears again in about five weeks for another chance for a crown.

“That’s what we are looking forward to, but there’s a lot of work to be done between now and then,” Hall said.

Hall enjoyed a memorable game against the Golden Bears in the 2019 title meeting.

The then-sophomore, who was a QB in his first varsity season, ran for 195 yards on 16 carries (a 12.2-yards-per-attempt average) and scored four touchdowns. He also threw for a score.

It’s a safe assumption that Hall enjoys playing against Canton.

“We have heard colleges who are interested in Deante,” LaLonde said. “He’s working hard in the classroom and I know he wants to play college ball.”

In the COVID-19 pandemic era, Watertown was restricted to playing other Section 3 schools, going 1-3 in the spring.

But this season, the Cyclones are back in their more familiar surroundings playing Section 10 schools, though a postponed game from last month against Malone remains in limbo.

“We are excited about the challenge that awaits with our opponents,” LaLonde said. “And, OFA is OFA.”

Davis said about half the current Cyclones played Pop Warner together beginning at an early age and that bonding has paid dividends.

“It’s fun to come to practice,” Davis said with a smile.