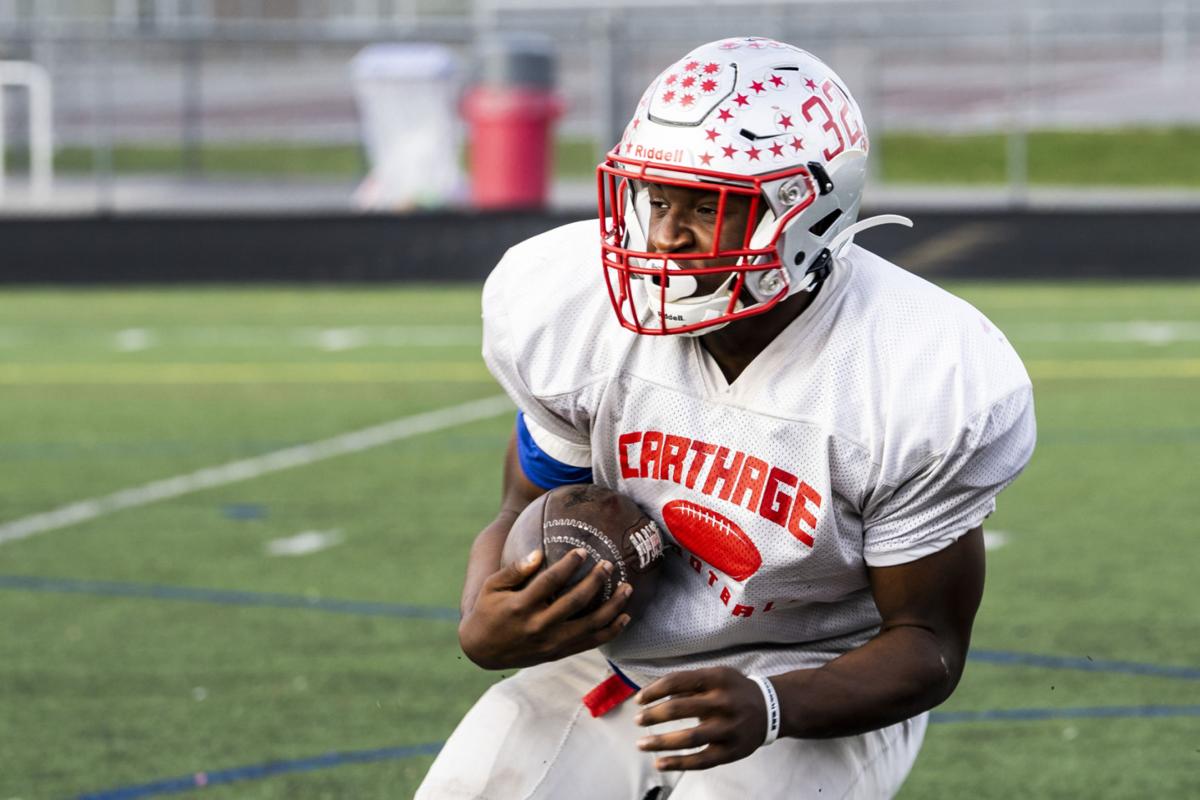 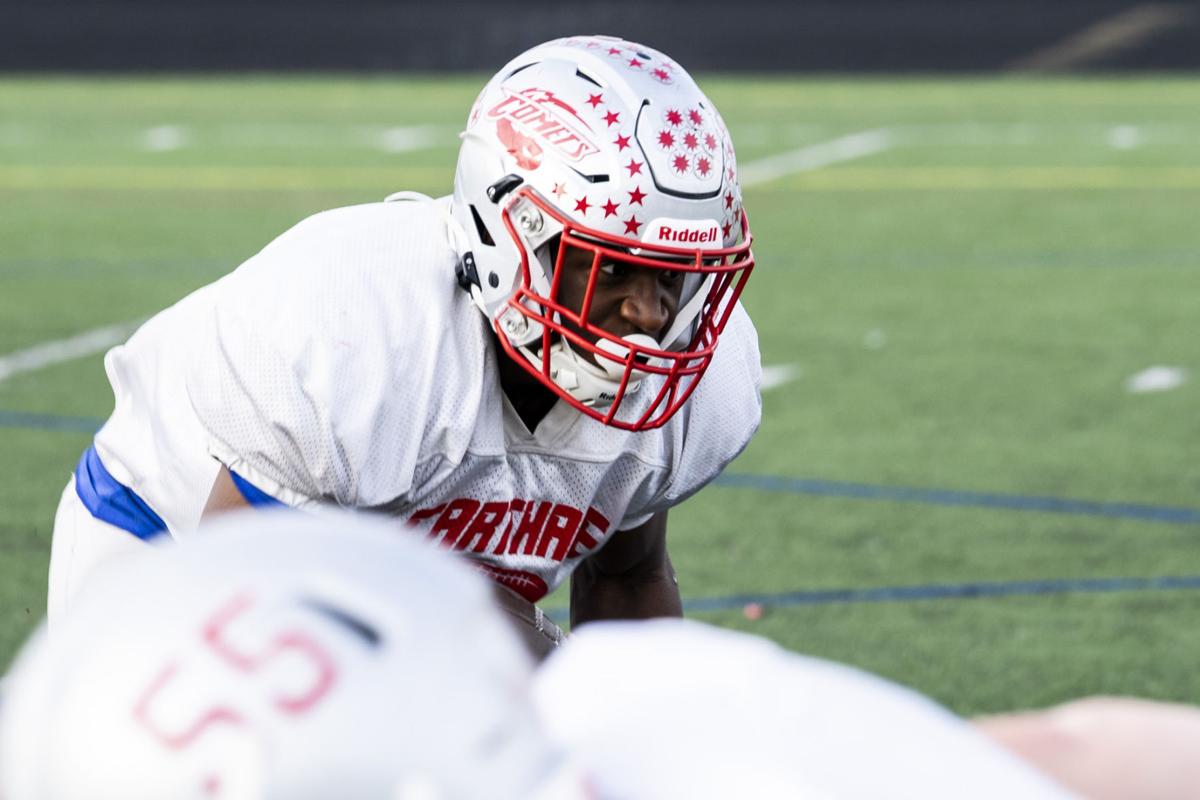 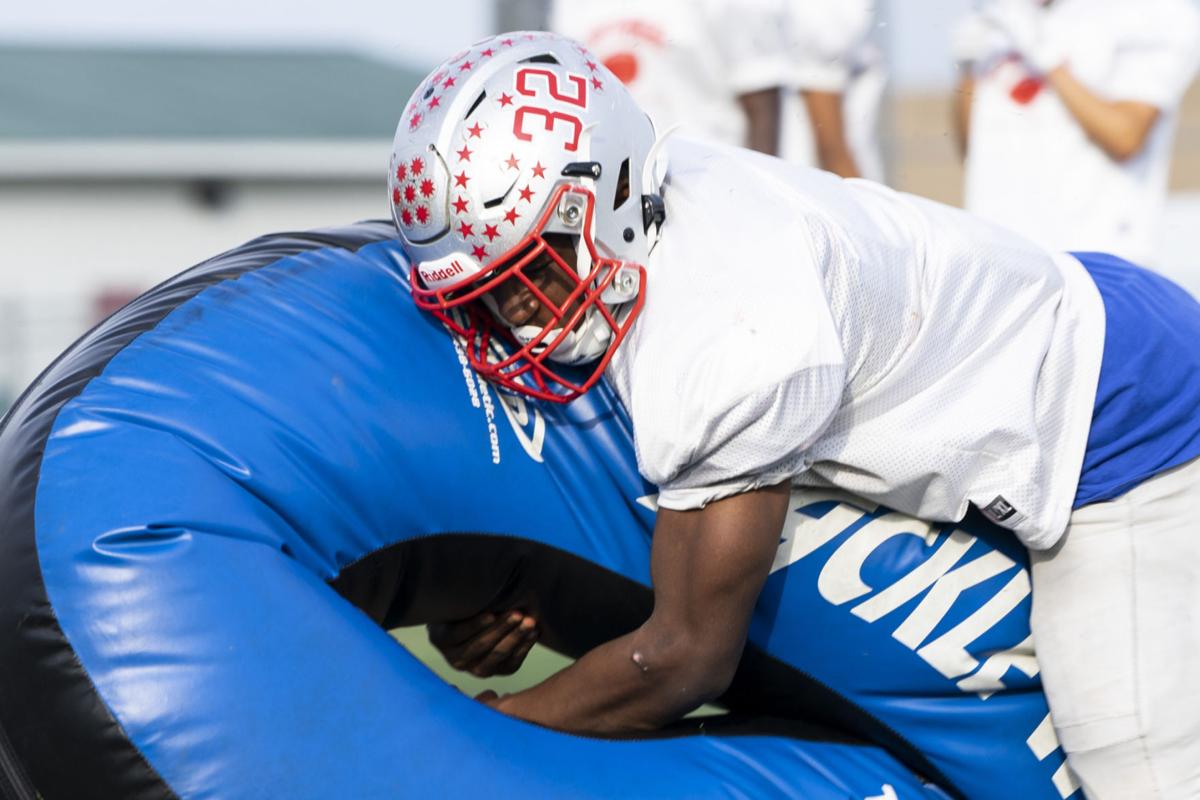 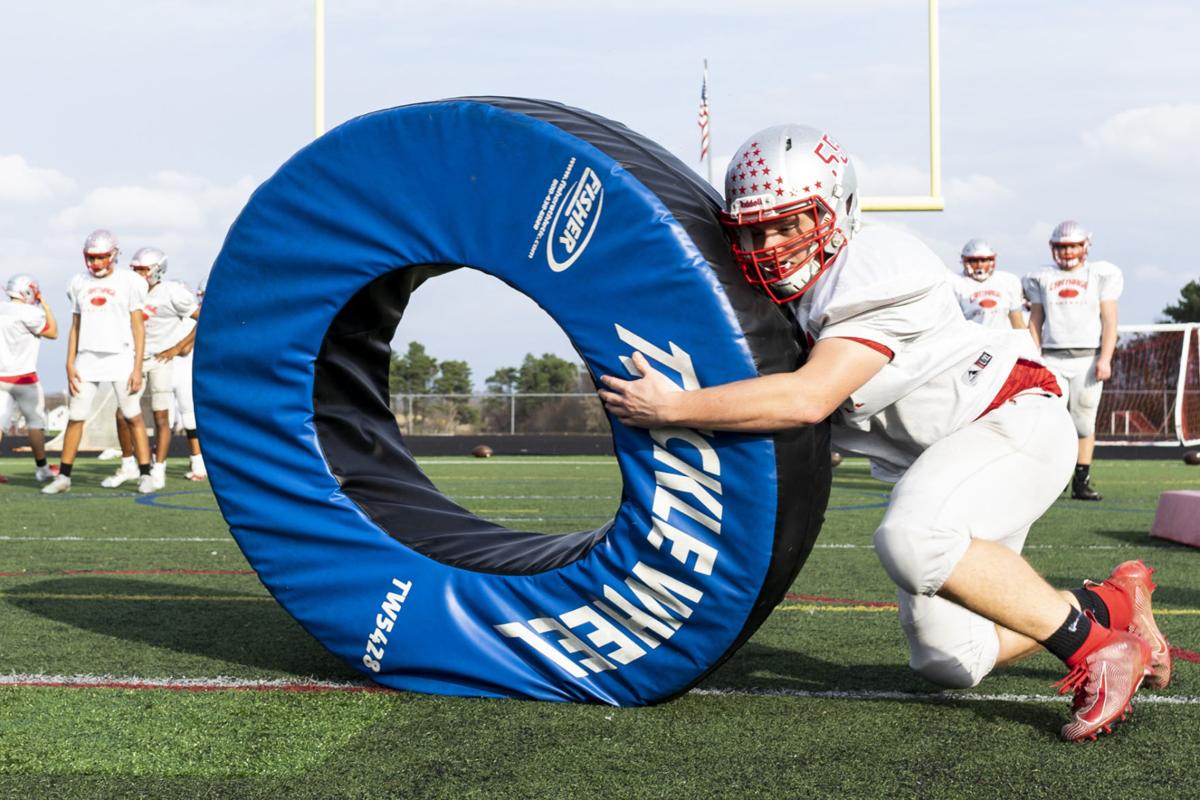 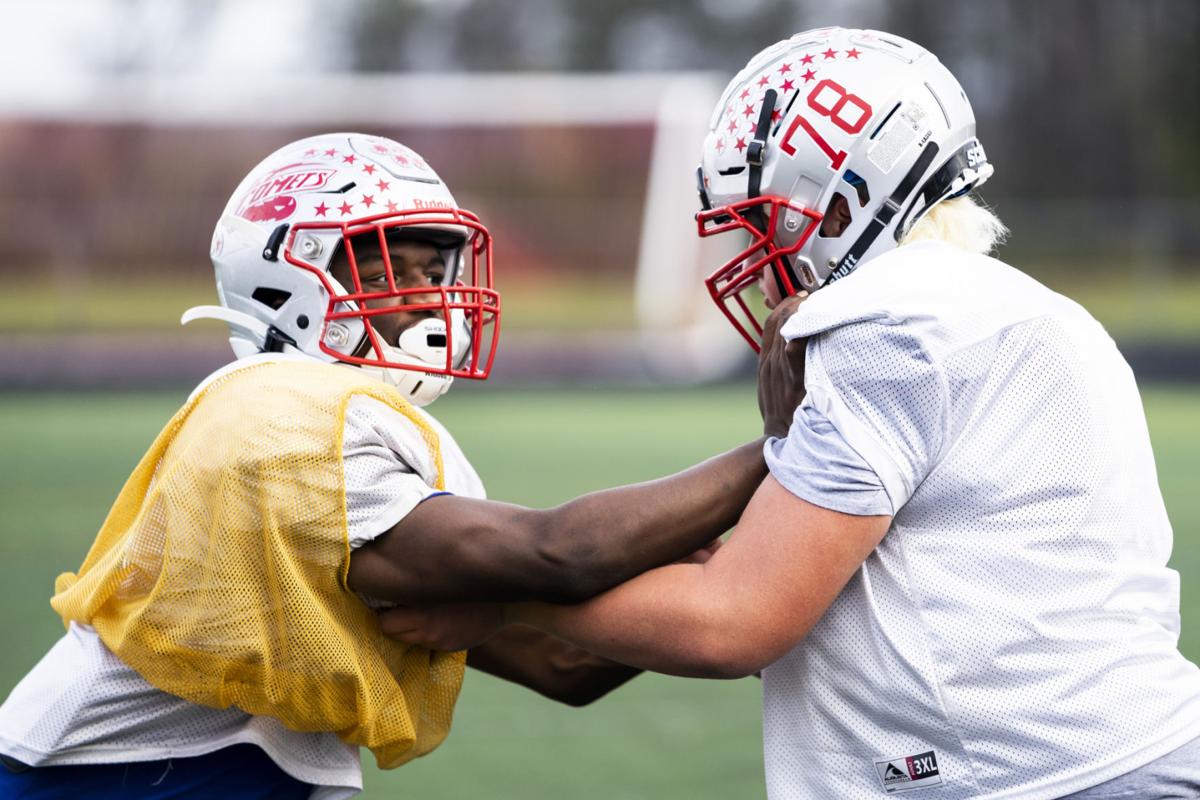 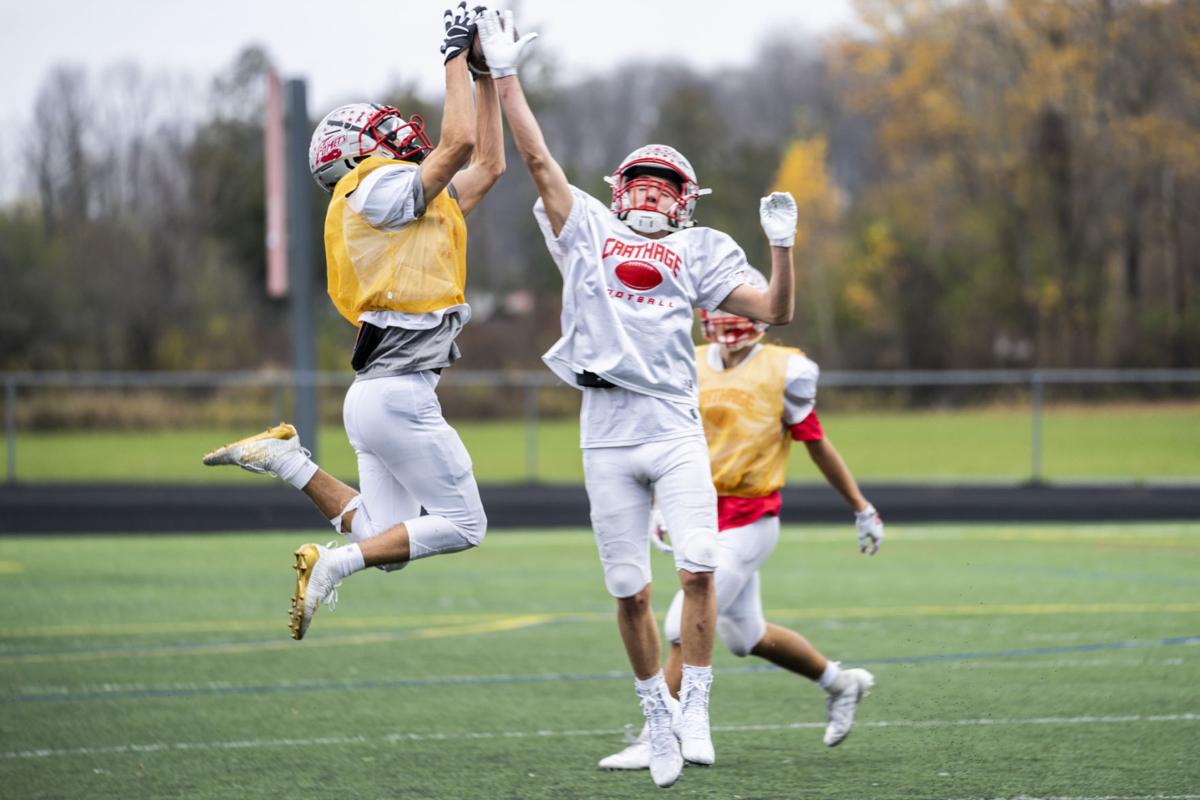 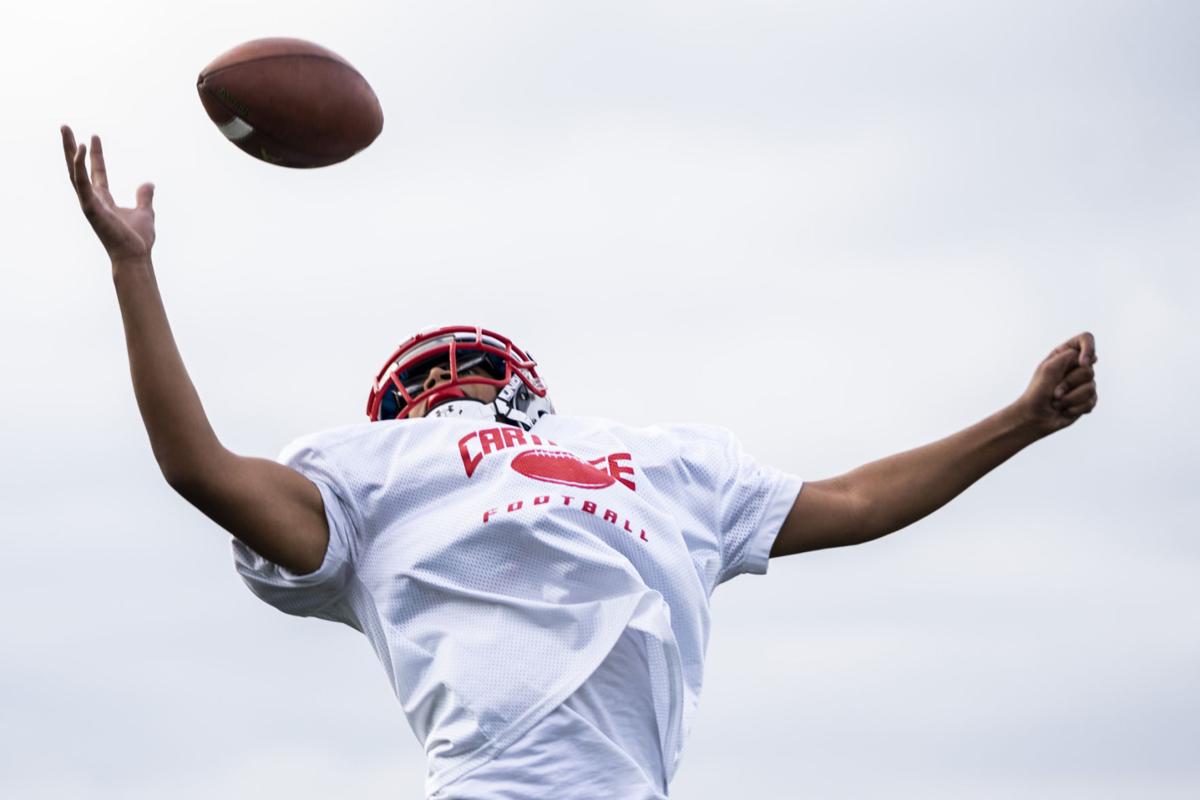 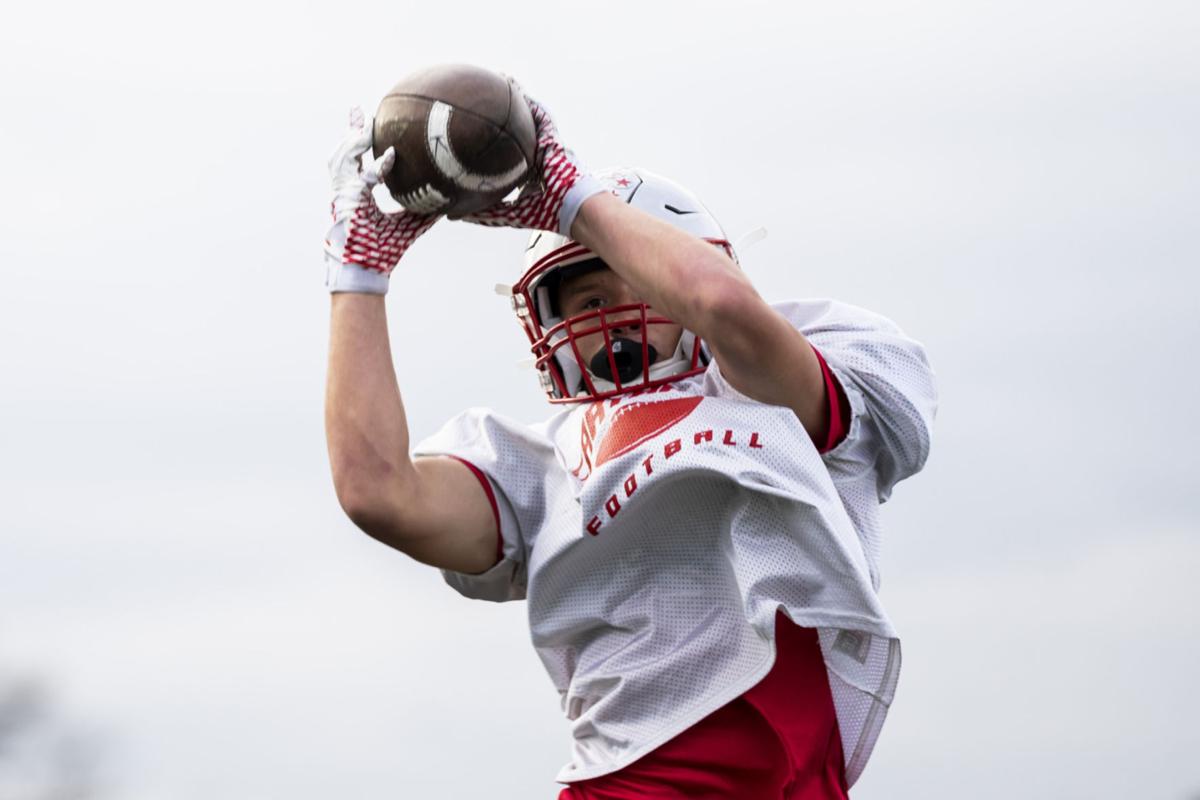 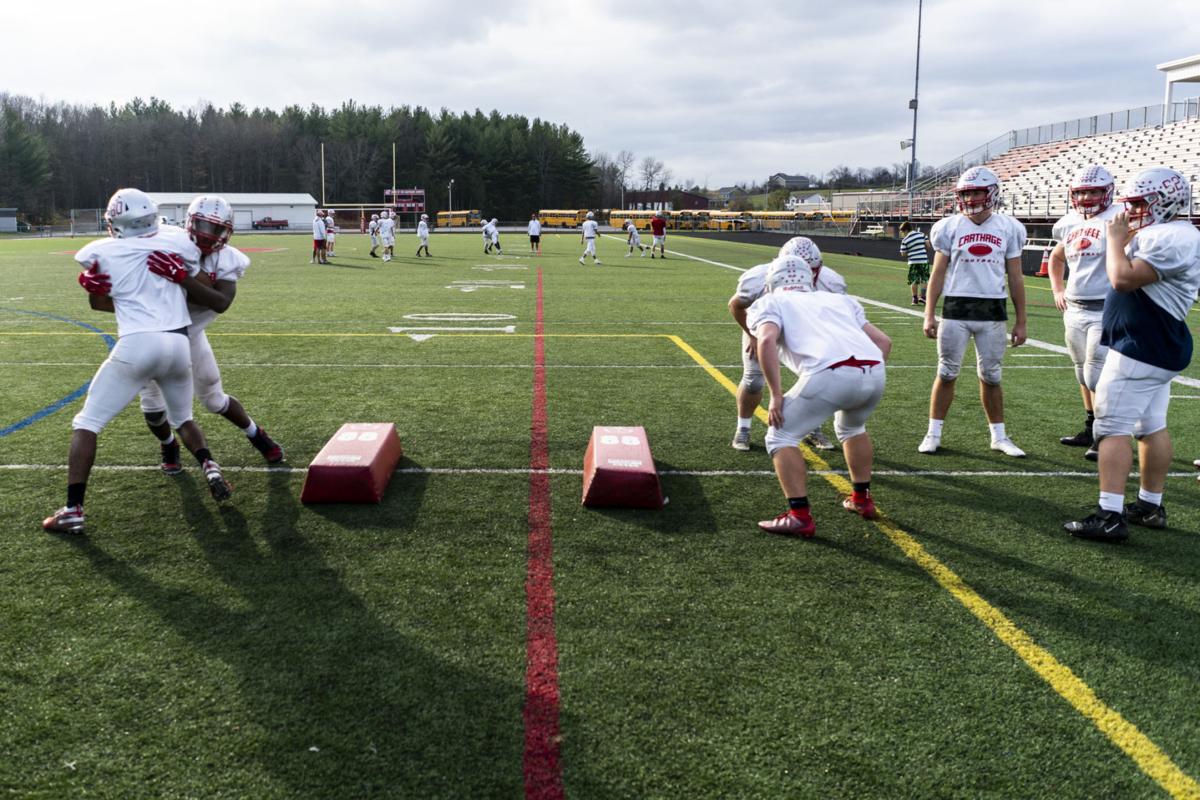 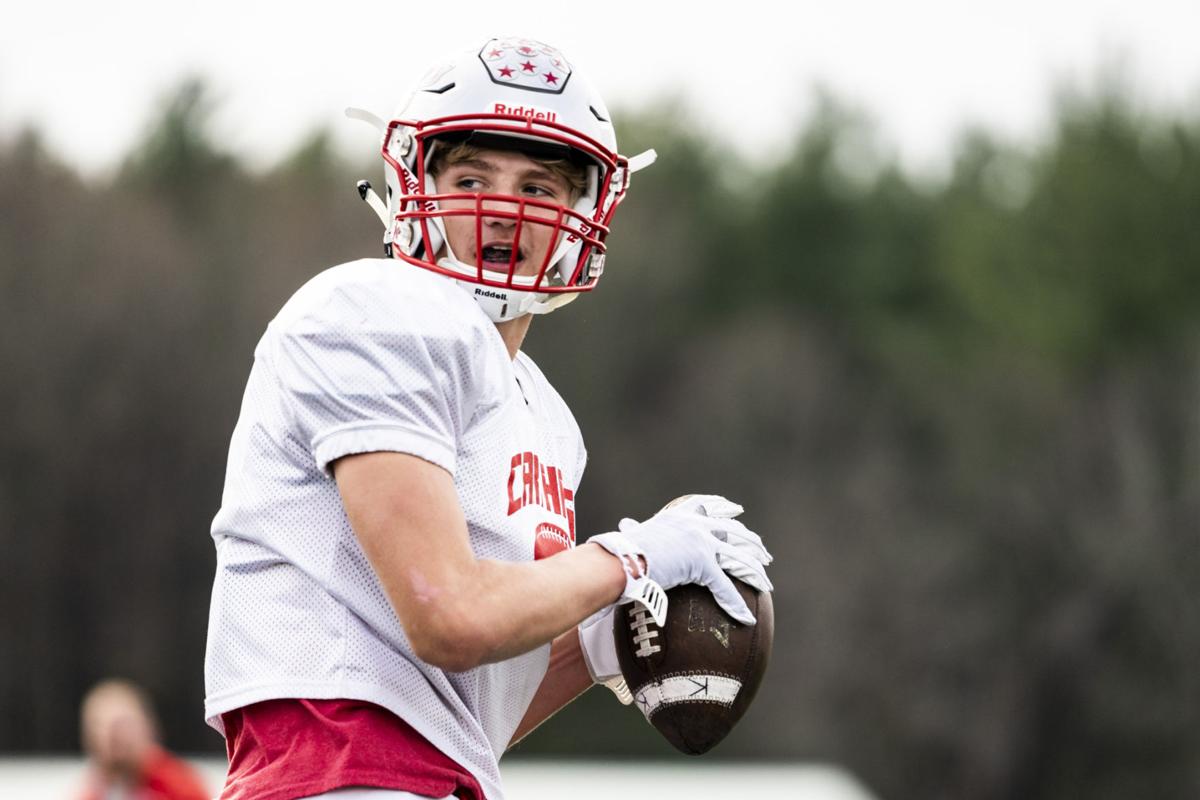 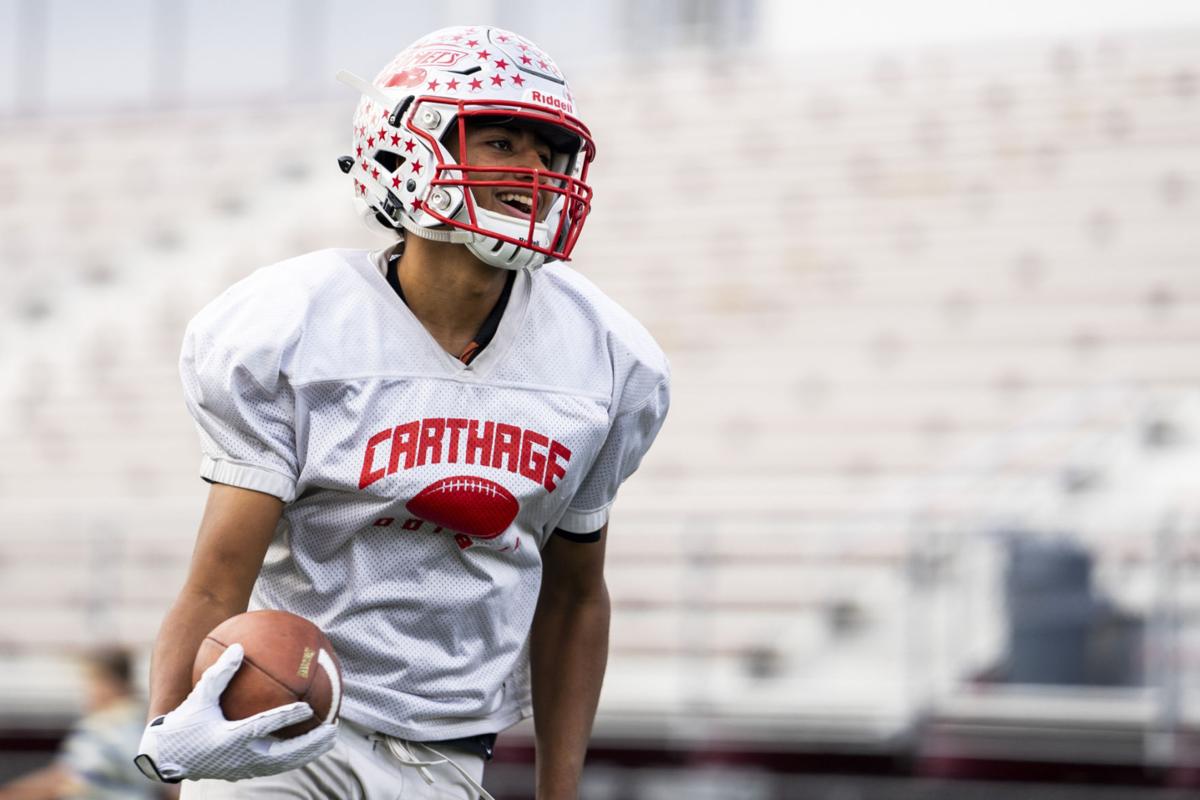 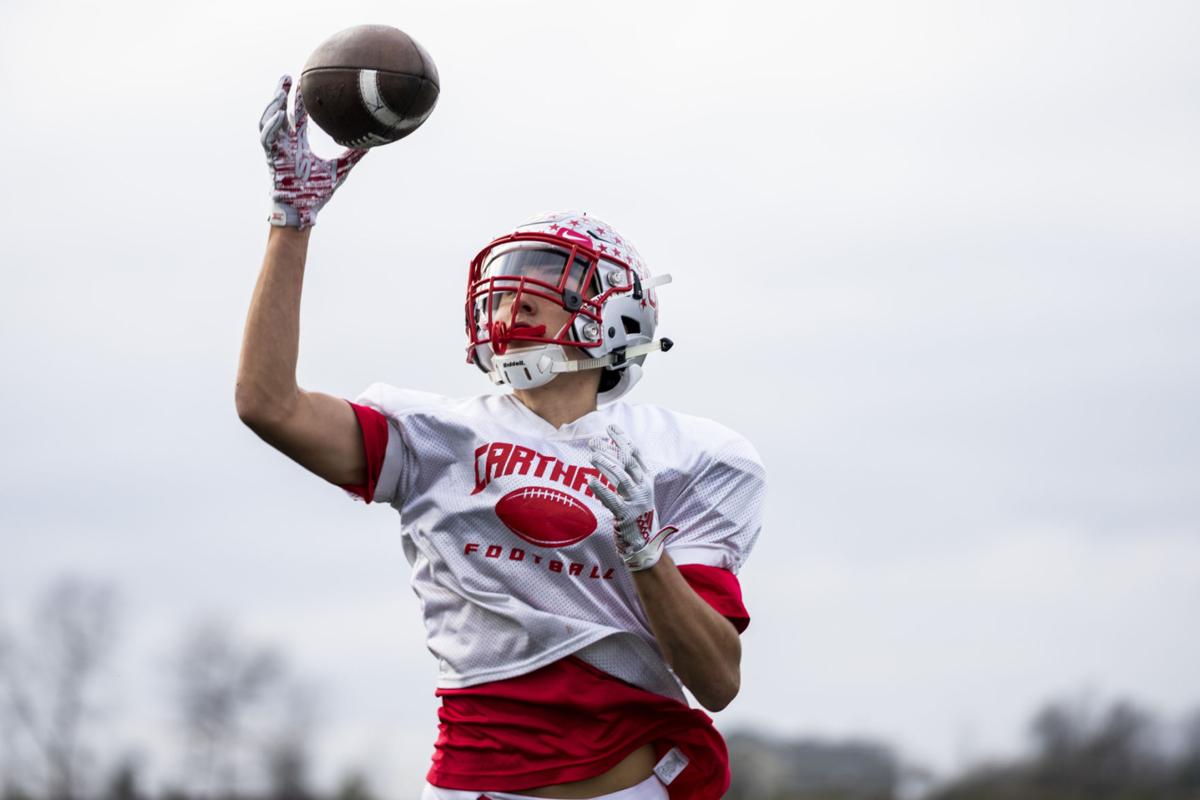 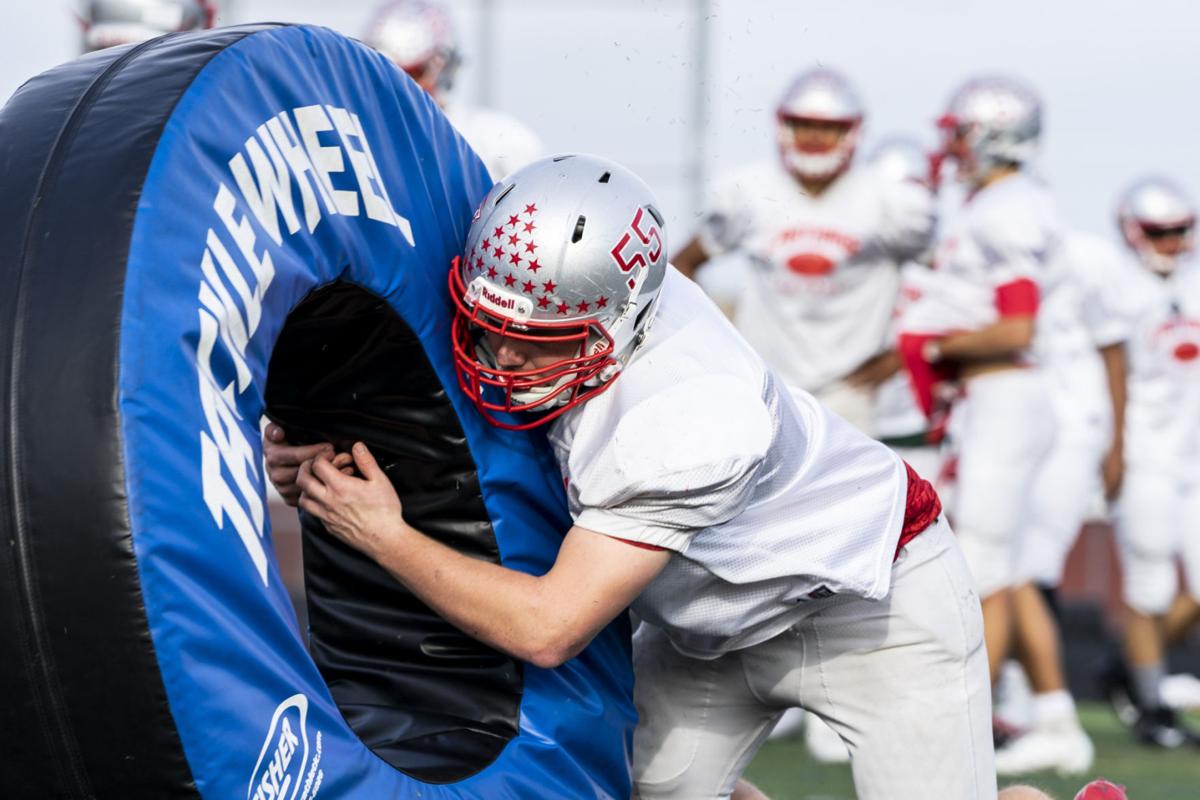 Caleb Berry (55) of Carthage football flies into the tackle wheel at practice on Wednesday in Carthage. Julia Hopkins/Watertown Daily Times 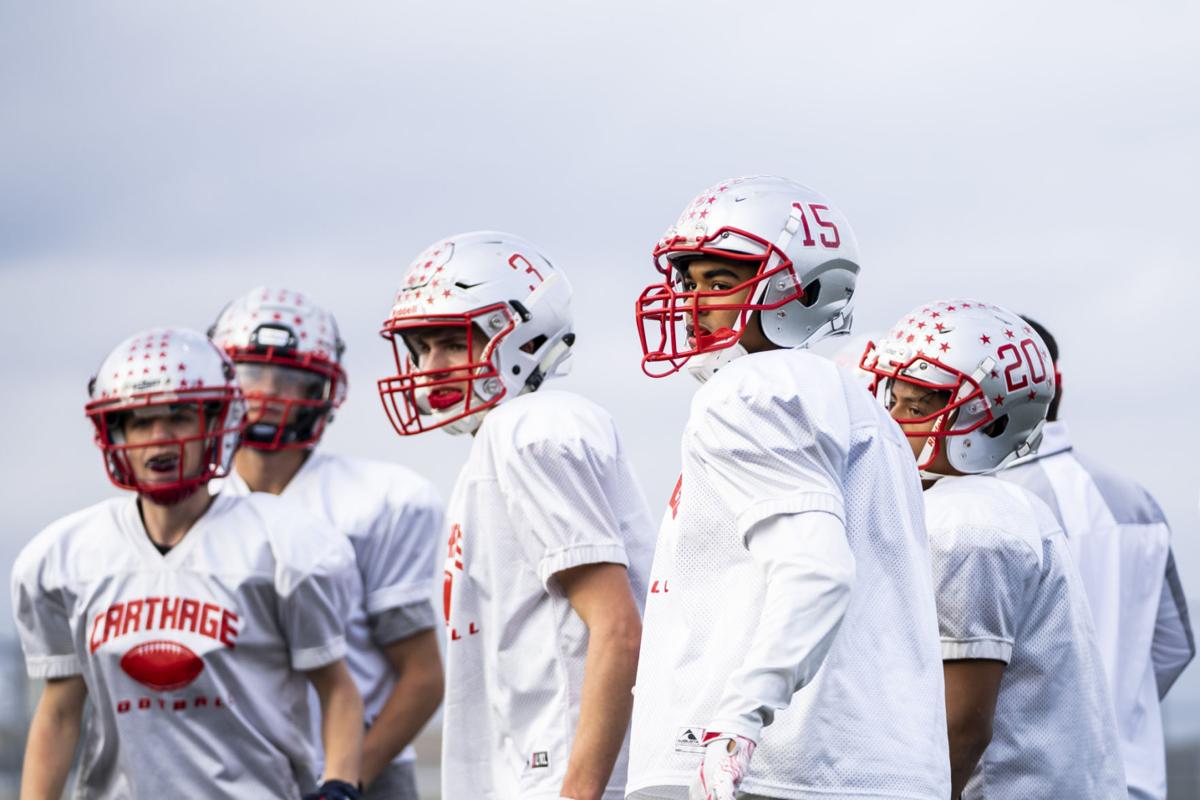 Caleb Berry (55) of Carthage football flies into the tackle wheel at practice on Wednesday in Carthage. Julia Hopkins/Watertown Daily Times

CARTHAGE — As a part of the Carthage pep rally in early October, each participating grade (ninth though 12th) needed to come to up with a chant. For the seniors it was easy, the words “Fombo’s Better” has become a rallying cry for the fans of the school’s best football team in years. It has turned into a hashtag on social media and has been written on signs brought to every game the students attend.

Its inspiration is obviously senior running back Fombo Azah.

The 5-foot-9, 190-pound runner has always been liked, but this year he’s been worshipped. In eight games, he’s rushed for 1,628 yards and 27 touchdowns, he’s rushed for 260 or more yards in each of the past three games and last week against state-ranked Auburn, he torched the Maroons, running for 311 yards and six touchdowns.

There are no shortage of memorable Fombo moments in 2019. Nathan Doremus, one of the leaders of the Carthage student section, remembers Azah returning the season’s opening kickoff against Maine-Endwell 80 yards to the Carrier Dome end zone for a touchdown. It was the first glimpse of what would become an explosive senior year.

According to Doremus, the preseason excitement amongst students was already higher than normal.

“It really all comes back to the (Carrier) Dome last year because we all wanted that team to succeed so bad,” Doremus said. “This year the team is really senior heavy, the energy is just different because we know this is their last year.”

This may be considered a breakout season for him, but it’s far from unexpected. Coaches saw a season like this coming for the third-year varsity player.

“We had a really good running back ahead of him for the last couple of years or he would have been a the lead tailback for most teams,” coach Jason Coffman said. “He’s taken that opportunity and has run with it. He never complained once over the past two years about not getting more carries. He played offense, he played defense, he’s done everything we’ve asked him to do, and he has really relished in this opportunity to be the No. 1 guy.”

It’s unclear when Azah’s season will come to a close. The Comets (7-1) begin the sectional playoffs tonight with a semifinal game versus Whitesboro (4-4) at General Brown High School, but are talented enough to take their season to late November and chase a state title.

While it’s taken Azah three seasons to get to this point, he’s grateful for the role he played in his first two seasons.

“Honestly I think it’s more than the past three weeks, it’s over just the past few years, just getting experience every year,” Azah said. “I feel a big part of it, and I say this every time, was sophomore year. That extra year really did a lot for me. I got a lot of time to look and see how varsity plays and all that. So, once this third year came it was almost like I was ready.”

It’s easy to see why Azah is so well-liked by his teammates and classmates. In school, Delaney Escudero, an active member of the Carthage student section, said the team, and particularly the seniors, are role models in the school. She called them celebrities.

Azah has carried a different type of weight though — people have gravitated toward him, showing their excitement about the team’s success.

“I go into the special education classrooms at school and for a while Fombo was coming in there with me,” Escudero said. “Those kids, like I said, he’s a celebrity. All my little siblings and little cousins and kids in the middle school, they all know Fombo. His personality off the field makes him a better player on the field.”

Azah has turned the fans’ excitement into fuel.

“It’s very exciting, I love it. Even when they’re cheering for me, I might not show it but I feel every single one of their chants,” Azah said. “I use it every game and I know without them I wouldn’t be able to do all the unreal stuff I’ve done.”

Azah can’t help but think about his stats and what they mean — despite what you see on the field, he’s still only human after all. When he looks back on this year, he’ll be proud of his personal accomplishments, but they won’t be the most important thing.

“The most important part is just doing it with the guys,” Azah said. “I know after I will be able to look back at my numbers anytime, but I won’t be able to play with them forever.”

Excellent kid on and off the field. Whitesboro will be tough. They have a great football tradition. They will do everything they can to win. 4th down, go for it. Fake punks, onside kicks, long bombs. Hope the weather gets better.