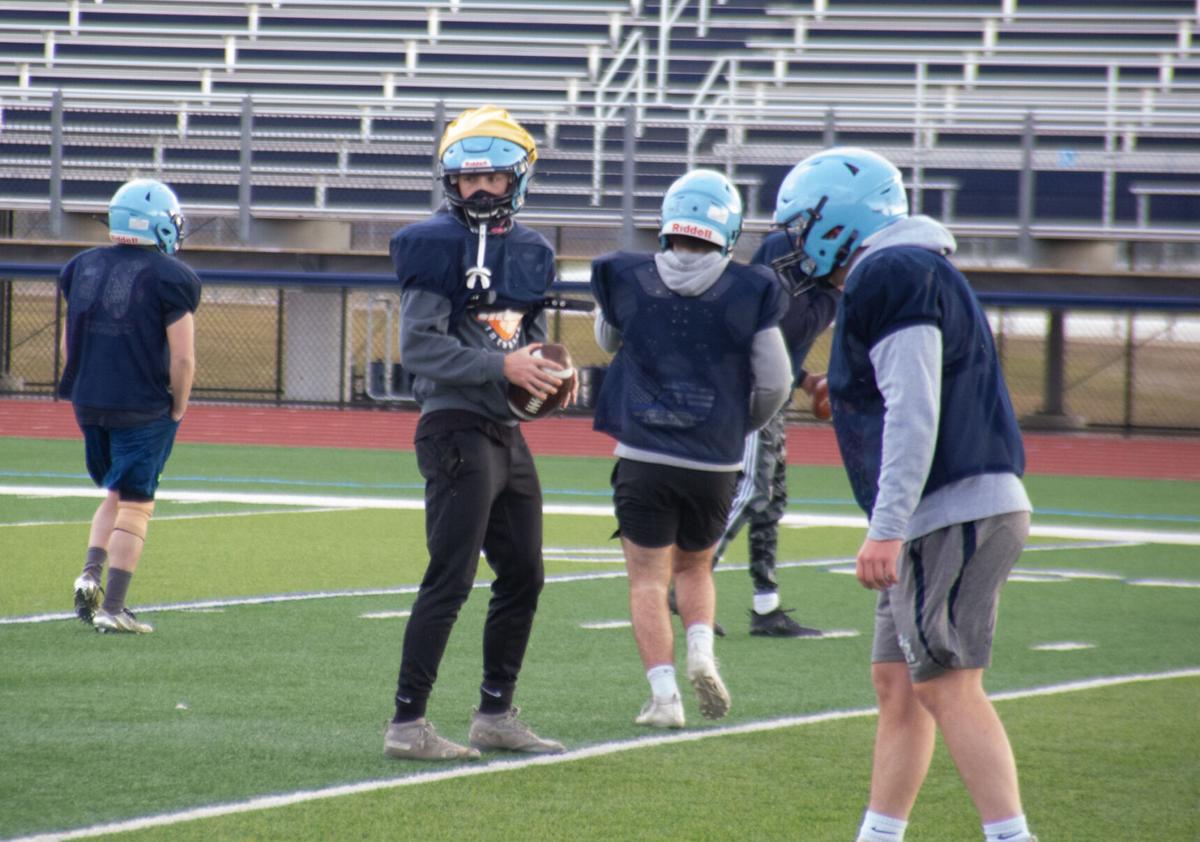 Indian River is putting in reps on their turf field ahead of the start of Fall II football season. Philip Sanzo/Watertown Daily Times 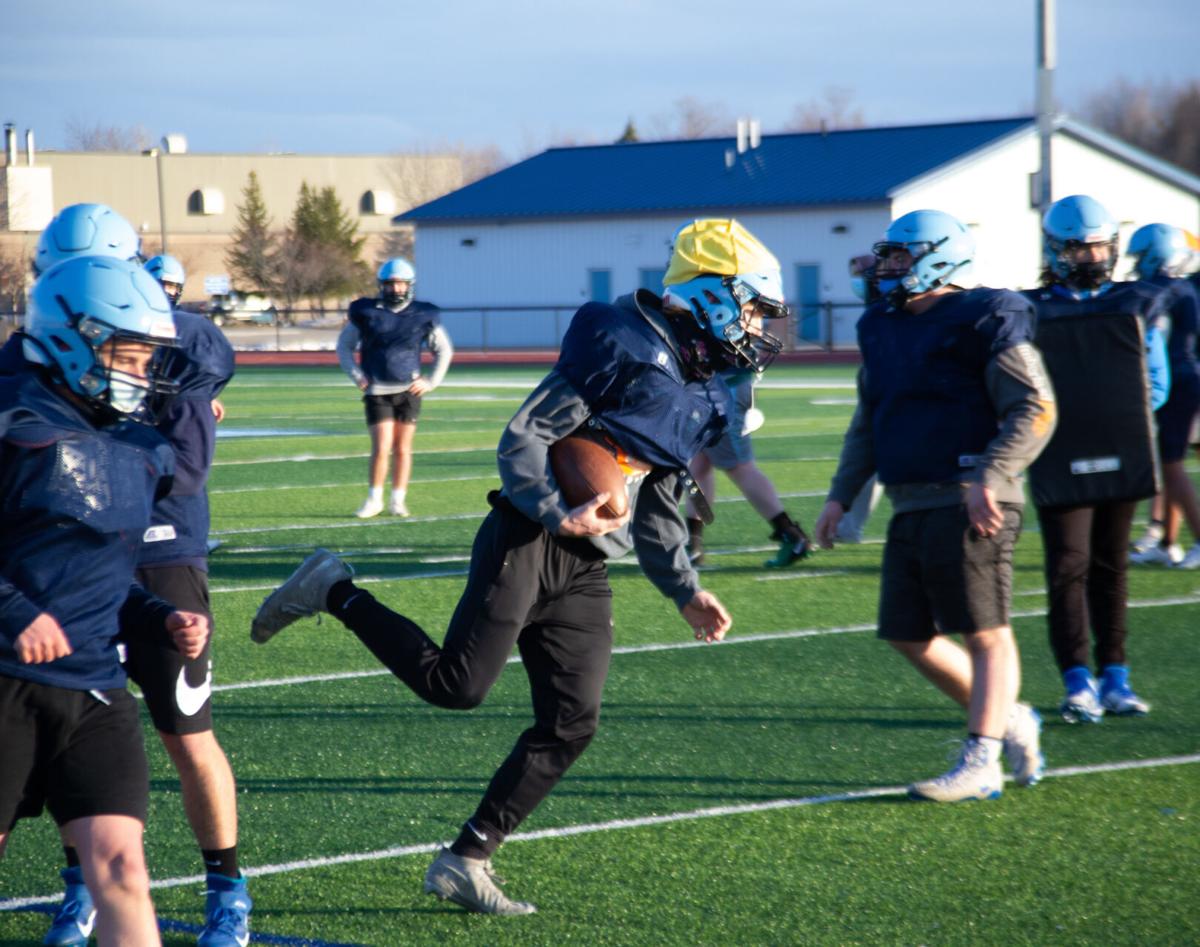 Indian River is putting in reps on their turf field ahead of the start of Fall II football season. Philip Sanzo/Watertown Daily Times

PHILADELPHIA — The wind was whipping so quickly through Indian River’s football complex on Friday afternoon, the bolts in the northwest corner uprights rattled incessantly.

With the warm temperatures of Wednesday and Thursday no longer in the air, Friday’s Indian River practice had a November feel to it.

Indian River coach Cory Marsell usually associates cold weather practices with playoff football, so starting the season in a warm hat and gloves is beyond strange.

“The kids are really doing a great job, they obviously all have masks on and we’re trying to separate them the best we can, there’s times we can’t but we do the best we can,” Marsell said. “We’re following protocols, the new norm for this year.”

For many Jefferson and Lewis county schools, football is returning after a year-plus hiatus forced by the COVID-19 pandemic. Most schools will go for about six or seven weeks, throughout March and April. There will ultimately be some overlap with spring sports.

Overlap isn’t totally uncommon for a school like Indian River, whose often deep, playoff runs bleed into the basketball practice each year. And overall, the attitude in the camp has been joyous. This was something that the kids weren’t really sure they were going to get.

“They’re excited just to be back out,” Marsell said. “We’ve been in the gym since (Thursday), they’re going hard, the guys are moving, there isn’t anybody standing. So it’s been good.”

The good weather of last week, combined with the careful work of the grounds crew, allowed the Warriors to be on their turf field for the second half of the week.

Field maintenance is going to be as big of an issue as any in this spring football season. A north country March isn’t always the kindest, so schools will need to navigate the weather as it comes. As for a protocol pertaining to keeping the turf field clear at Indian River in the event of a storm, those specifics aren’t quite ironed out.

“Nothing that I know of,” Marsell said. “I do know there are some local teams that can plow their field this year. So, if there’s a storm, we may be heading there.”

Carthage is one of those schools. The district is planning to replace their turf field this summer, so for the first time in its history, the school decided to plow some of the snow off of its surface.

The plow didn’t go straight down to the turf, with the four feet of snow piled on the field, the district plowed the top three feet and let the sun melt the rest.

The Comets will most likely practice outside this week, their first day of practice is Monday.

Football games should start by the end of the month. Like basketball, the Frontier League schools will stick together. Local teams will compete against each other, in some cases more than once.

“What they’re doing is that they’re doing it in blocks,” Coffman said. “We play Indian River between the 29th of March and April 1st. And then we play Watertown some day over vacation (the week of April 4th). We’re leaving this open because it’s more important that we play when it’s not going to be 20 degrees and 40 mile per hour winds.”

Prior to last Monday, Indian River’s last football activity was its sectional semifinals loss to Auburn on November 2, 2019. That’s 16-plus months of no football. Given gym closures and the lack of organized athletics, it would be understandable if some of the Warriors came into camp out of shape. According to senior offensive lineman, Garrett Decker, that’s not the case, though.

“I think we were in great shape, I know I’m personally in great shape,” Decker said. “I’ve been working out all offseason, me and bunch of guys. I’m proud of our team, our guys really put in the work in the offseason, they really did a great job.”

Rowan Marsell returns to the Warriors as a junior. Like many players and coaches across all sports, he is viewing this abbreviated season as a way to prepare for a more typical season next school year.

“For me, since I’m younger, we’re obviously going out and we’re trying to win every game,” Marsell said, “But I want to get the younger guys ready for next year when we’re going to get out and practice for a sectional and state title.”