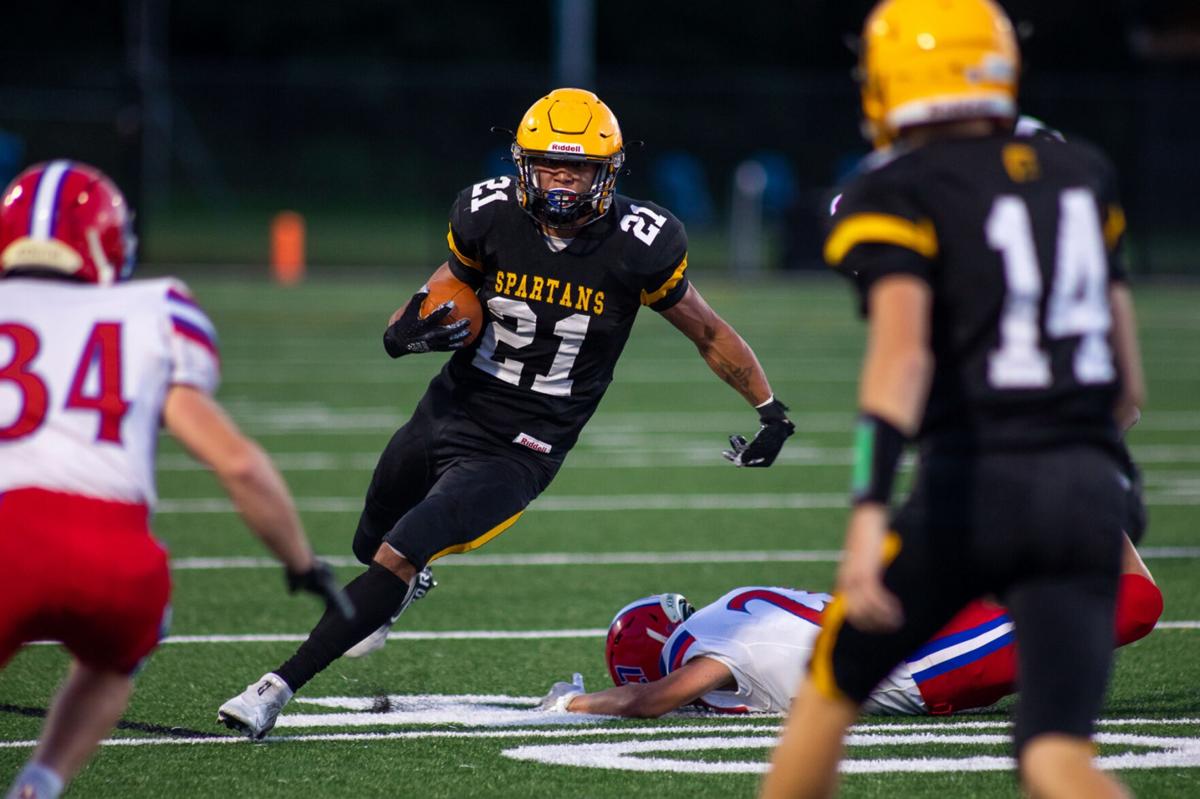 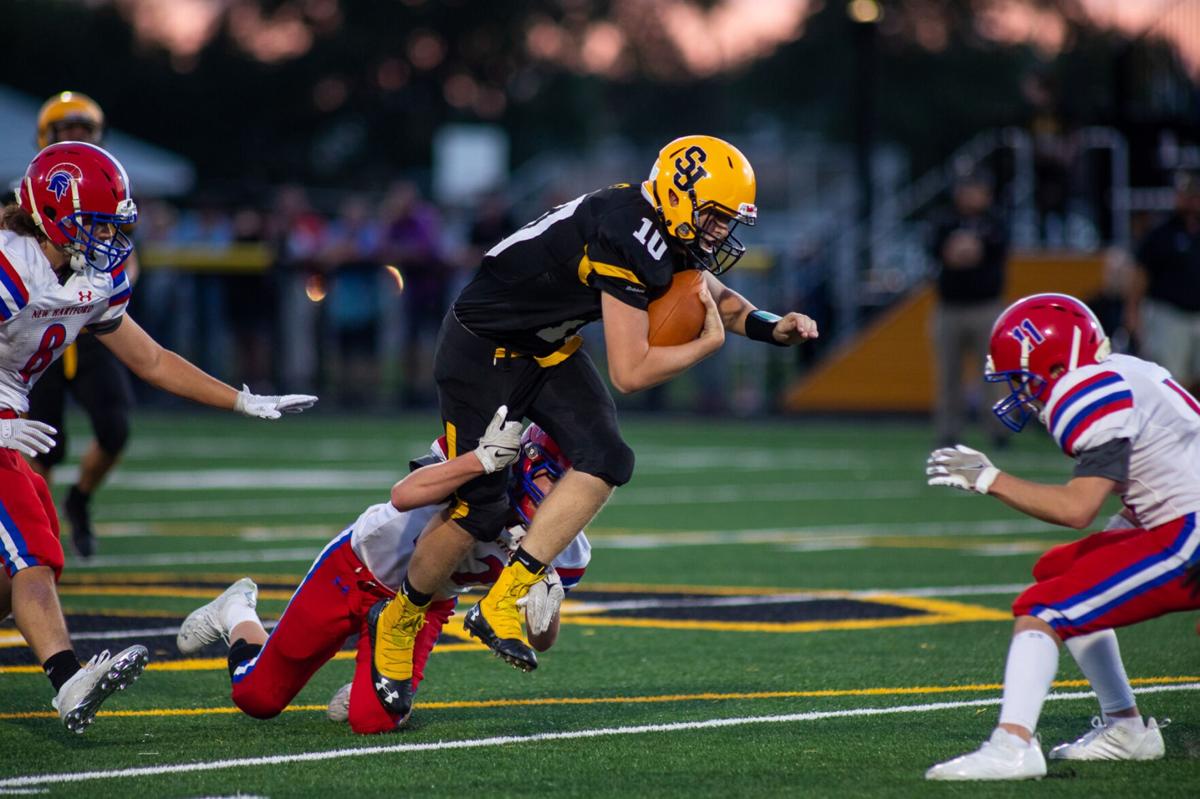 South Jefferson’s Landon LaDuke lands a first down as he is taken down in the second quarter of Friday night’s game against New Hartford. Kara Dry/Watertown Daily Times 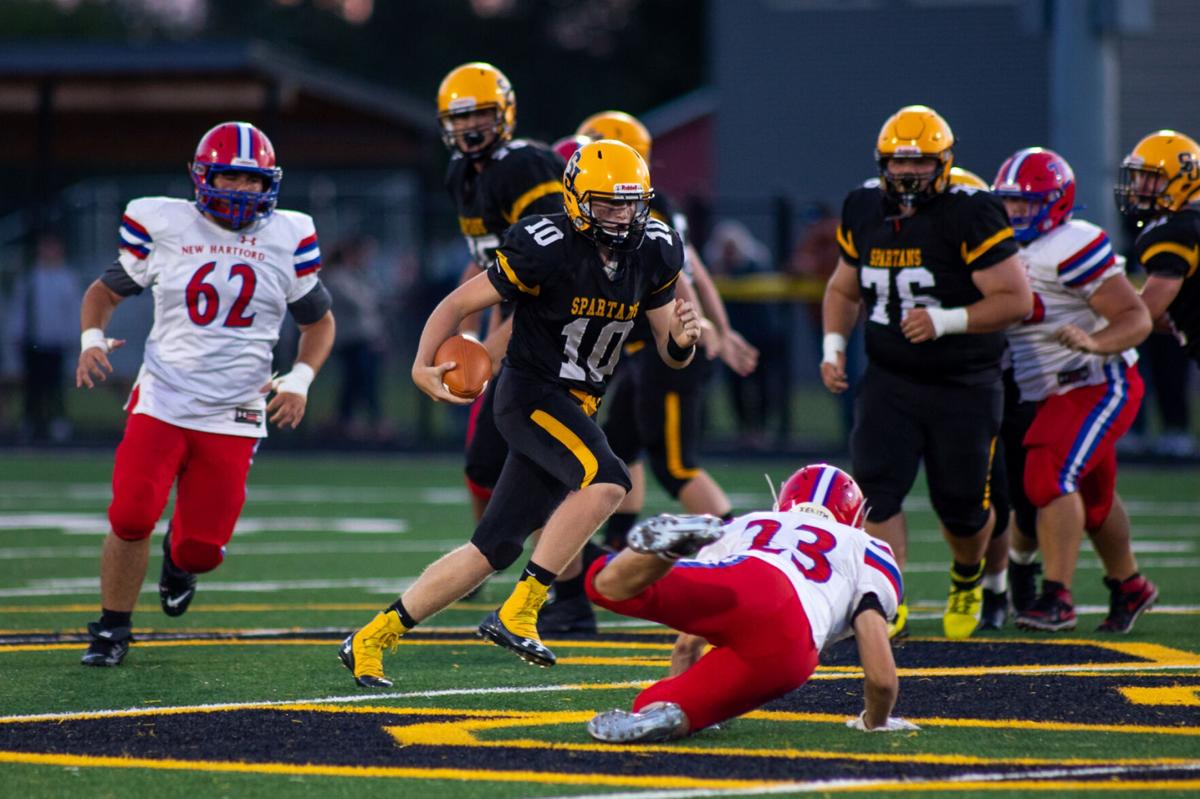 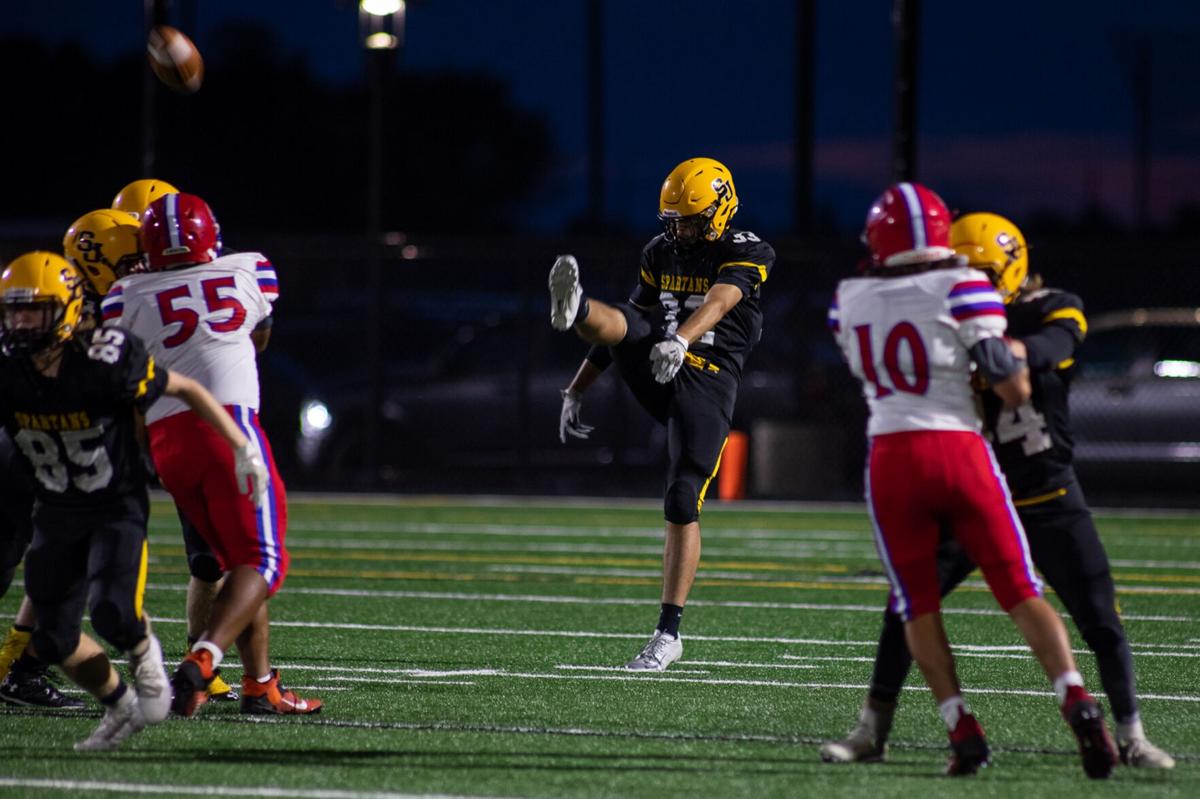 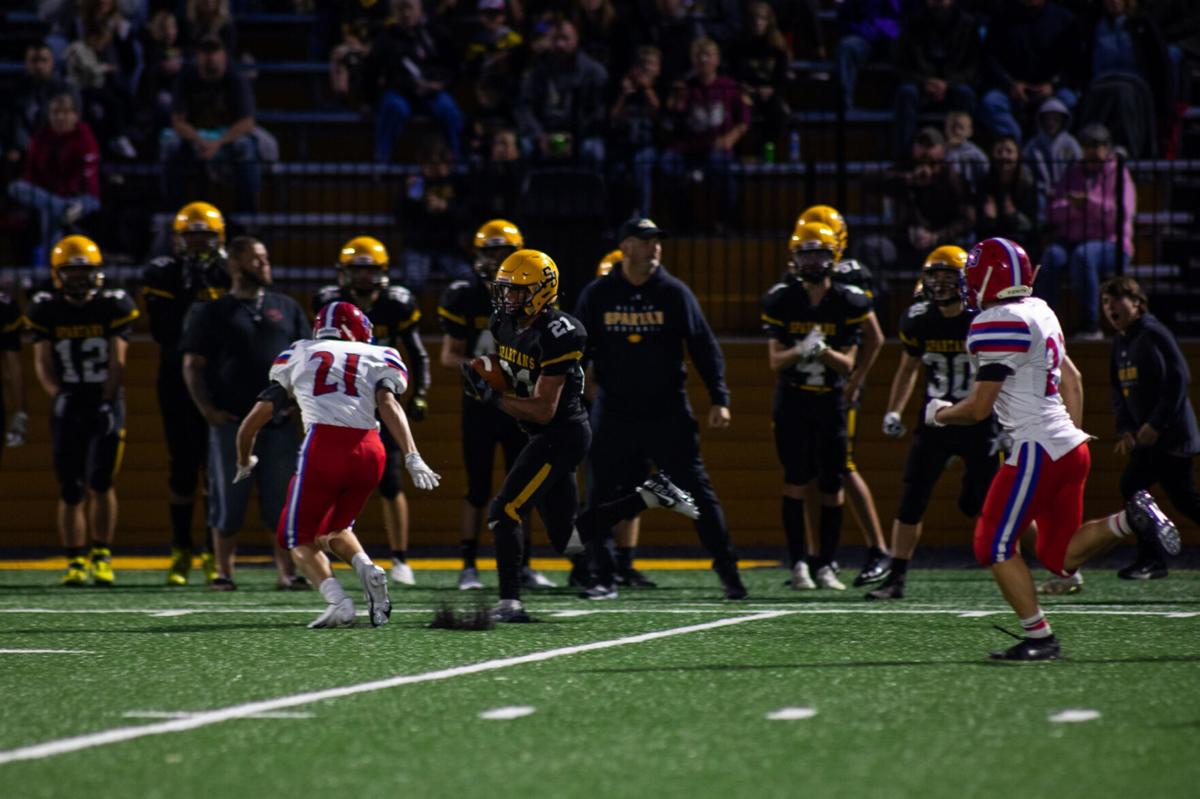 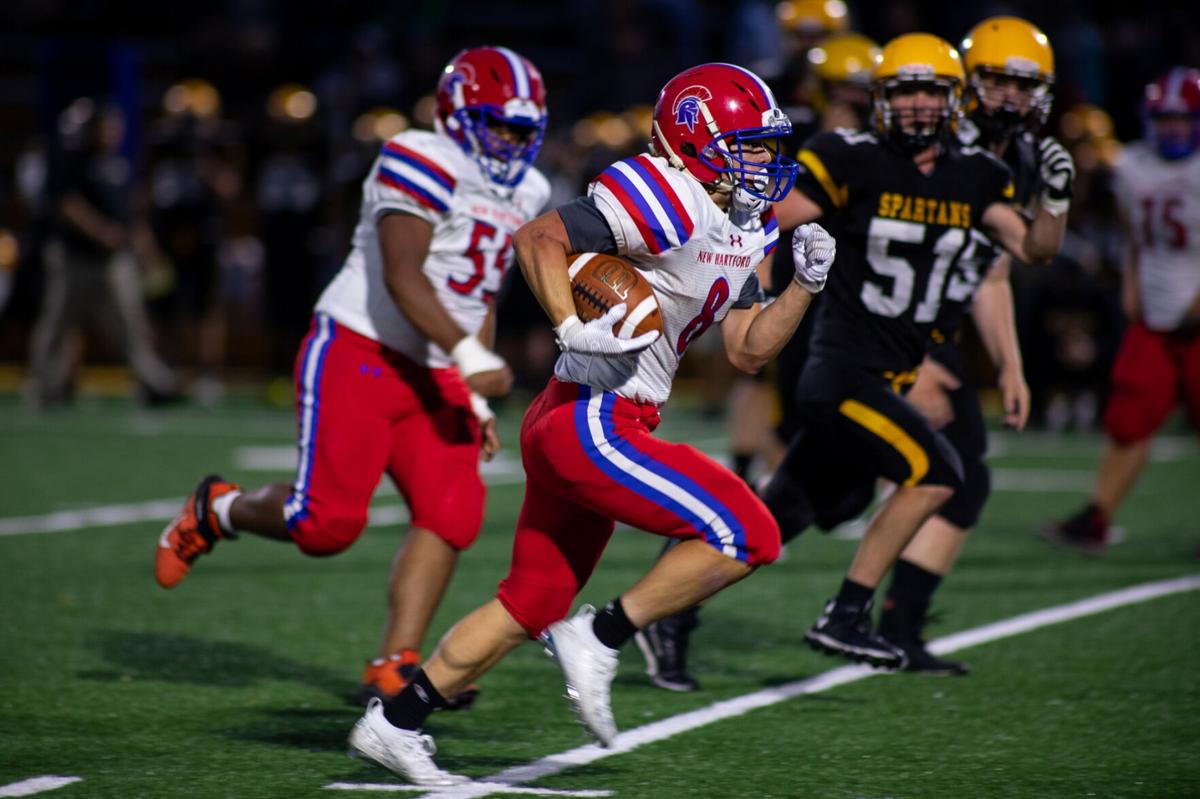 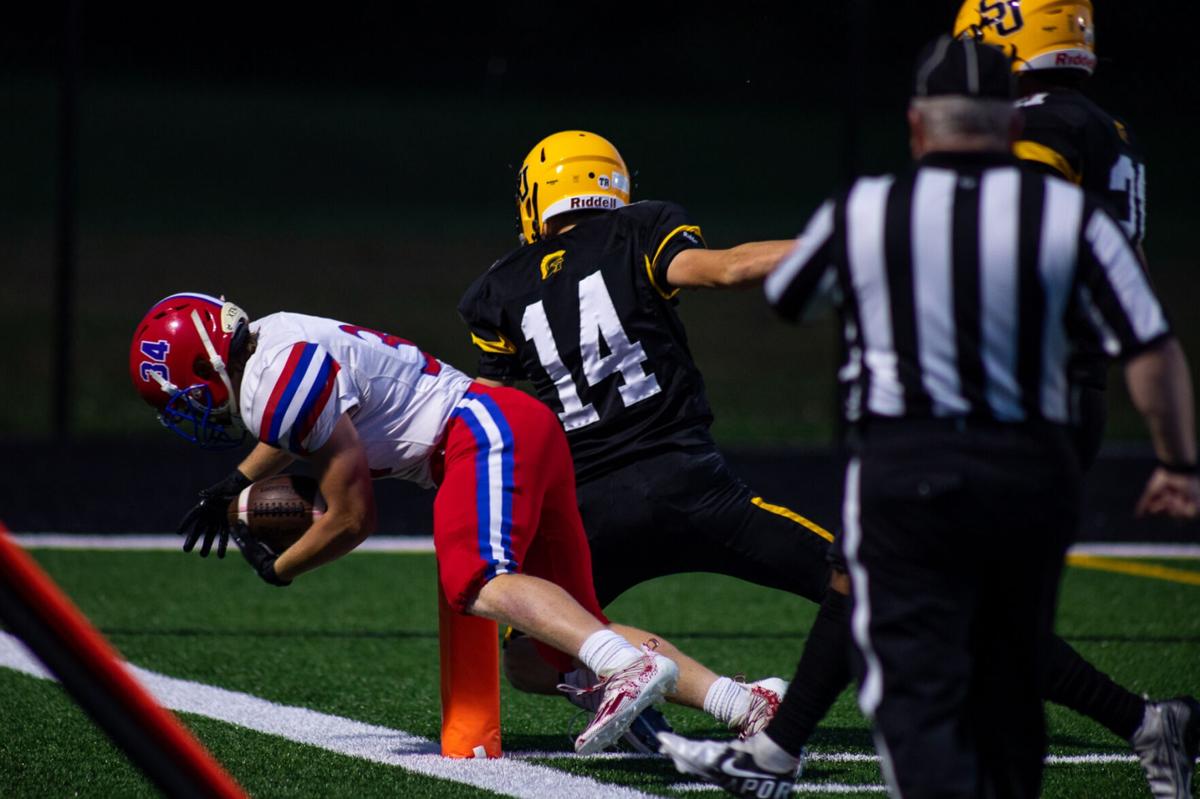 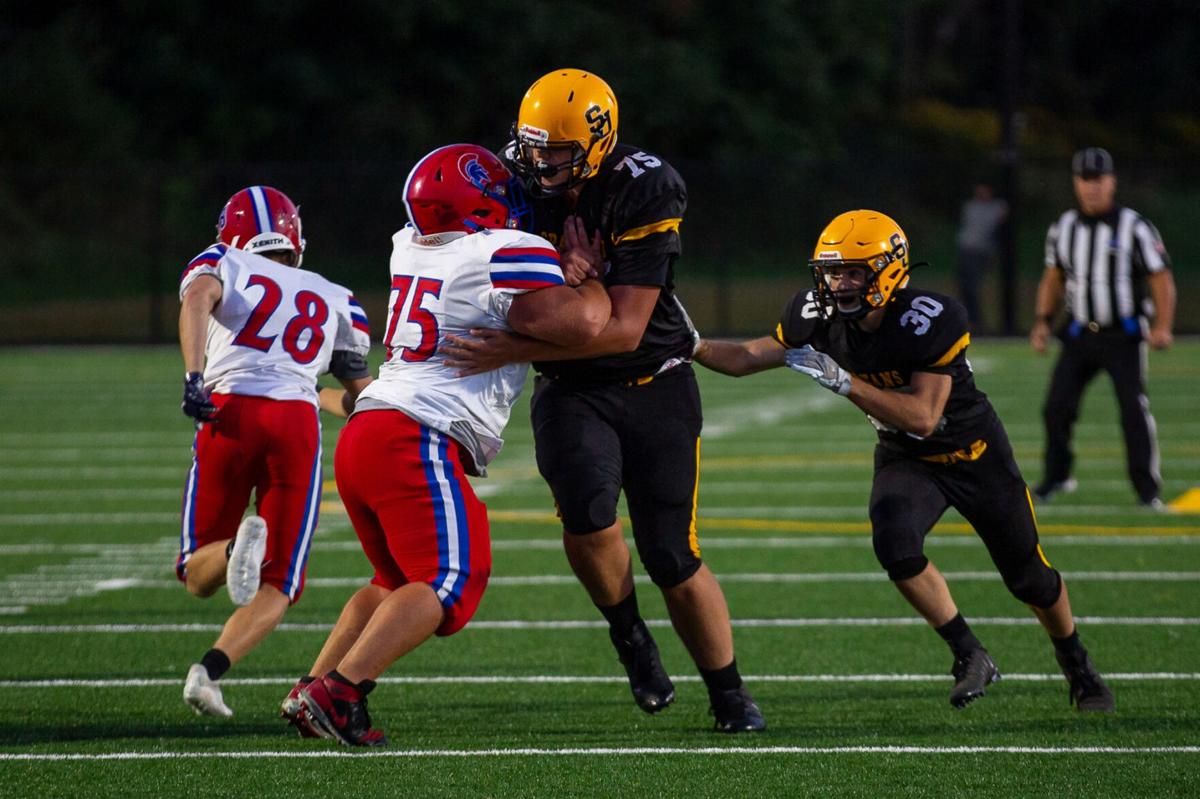 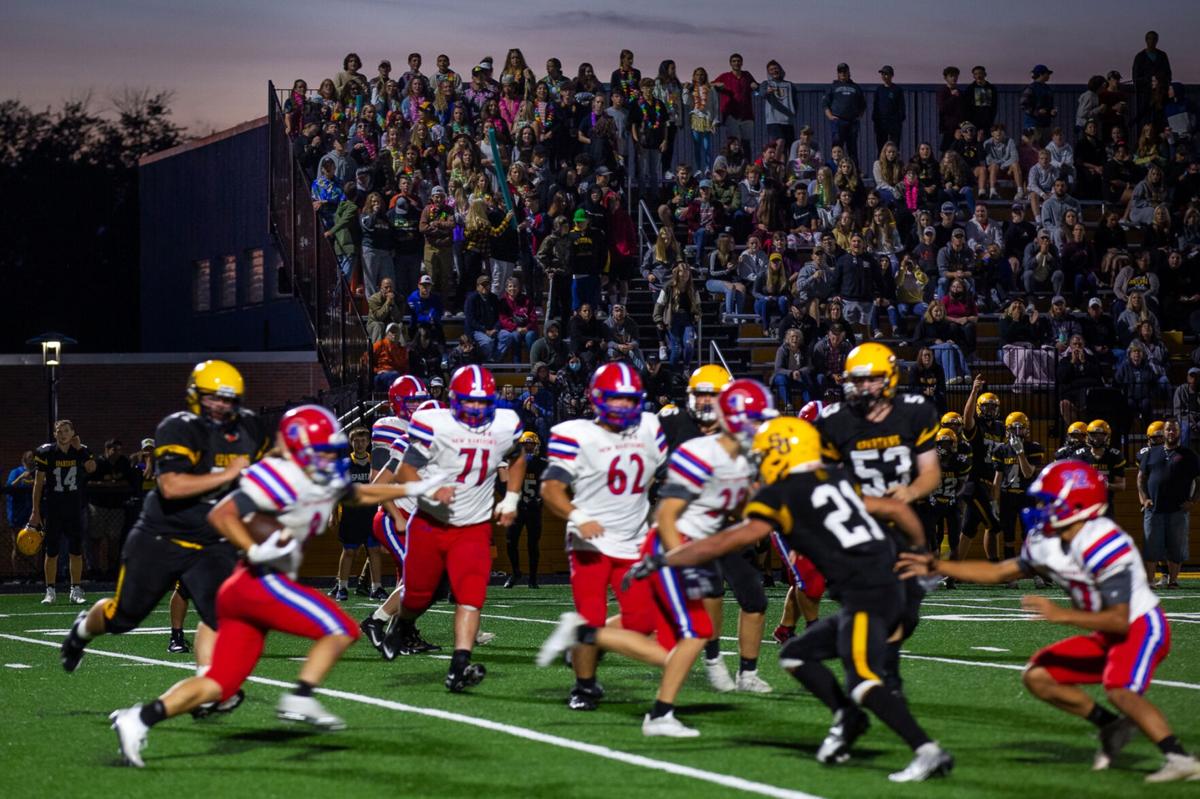 South Jefferson’s Landon LaDuke lands a first down as he is taken down in the second quarter of Friday night’s game against New Hartford. Kara Dry/Watertown Daily Times

ADAMS — On the opening night of high school football season, Alex Collver and his teammates made it a memorable night for New Hartford.

Unfortunately, for South Jefferson, this came at its expense as the opposition seized the initiative early and often.

Collver rushed for two touchdowns in the first half and returned an interception for a score — all in the first half — as New Hartford rolled to a 65-8 triumph over South Jefferson in a Class B Division crossover game on a seasonably crisp and cool evening.

“It’s amazing, it’s a good way to start the season off,” Collver said. “We really put points on the board, good blocking, actually amazing blocking. It was a good team effort and we can’t wait for next week.”

Collver, a junior tailback, totaled 118 yards on the ground on 13 carries, with most of the damage coming before halftime.

New Hartford dominated on both sides of the ball, receiving a spark on defense at it forced five turnovers, with four of them leading to scores.

After Collver scored on a one-yard run on New Hartford’s second possession of the game, just one minute and 24 seconds later, Tommy Vitagliano intercepted a pass and returned it 24 yards for a score and a 14-0 lead with 5:23 left in the first quarter.

“We had some good momentum, obviously I thought the interception for a touchdown early on for us kind of got us going,” New Hartford coach Jim Kramer said. “But, I’m proud of our kids with everything that goes on with the COVID situation, this is our first night game we’ve played since 2019 with a true amount of fans. So I’m excited how they responded to it and I’ve got a good team that wants to get better every day, so I’m happy about that.”

New Hartford then struck quickly in the second quarter, following up another score with a defensive touchdown.

Three plays later, Collver returned an interception for a score and a 28-0 lead with 10:45 left in the first half.

“Those were really good for us,” Collver said of New Hartford’s timely interceptions. “Defense is a big part of our game.”

Two possessions later, New Hartford scored on a one-yard rush by running back Cole Raux, before converting on another turnover as Logan Banek returned a fumble recovery 11 yards for a 42-0 edge with 2:09 left in the half.

New Hartford wasn’t done in the half as Collver scored on a 20-yard run with 41 seconds left for a 49-0 halftime lead.

“I think in the first quarter, we were able to go back and forth with them,” South Jefferson coach Randy Fuller said. “I think their size and experience really wore us down in the second quarter. And we just couldn’t anything going consistently on offense, we’d get a big play and then take two steps back.”

South Jefferson averted a shutout as senior running back Derrick Sciarabba scored on a four-yard rush and with the two-point conversion run from Landon LaDuke, pulled to within 57-8 with 9:39 left in the game.

Despite the lopsided result, Fuller looked at the outcome as a learning experience for his primarily young team.

“I know we had those interceptions, but we’ve got two young quarterbacks,” Fuller said. “We’ve got two sophomore quarterbacks, so they’ll get better. ... And I think the guys, believe it or not, stayed resilient and kept fighting.”

South Jefferson fared 1-2 in the Fall Season II in the spring after forging a 5-3 record in the 2019 season, including a Section 3 playoff experience.

“The biggest thing is hopefully (we) get better,” Fuller said.

South Jefferson will begin Class B North Division play when it hosts Camden at 6:30 p.m. Thursday.