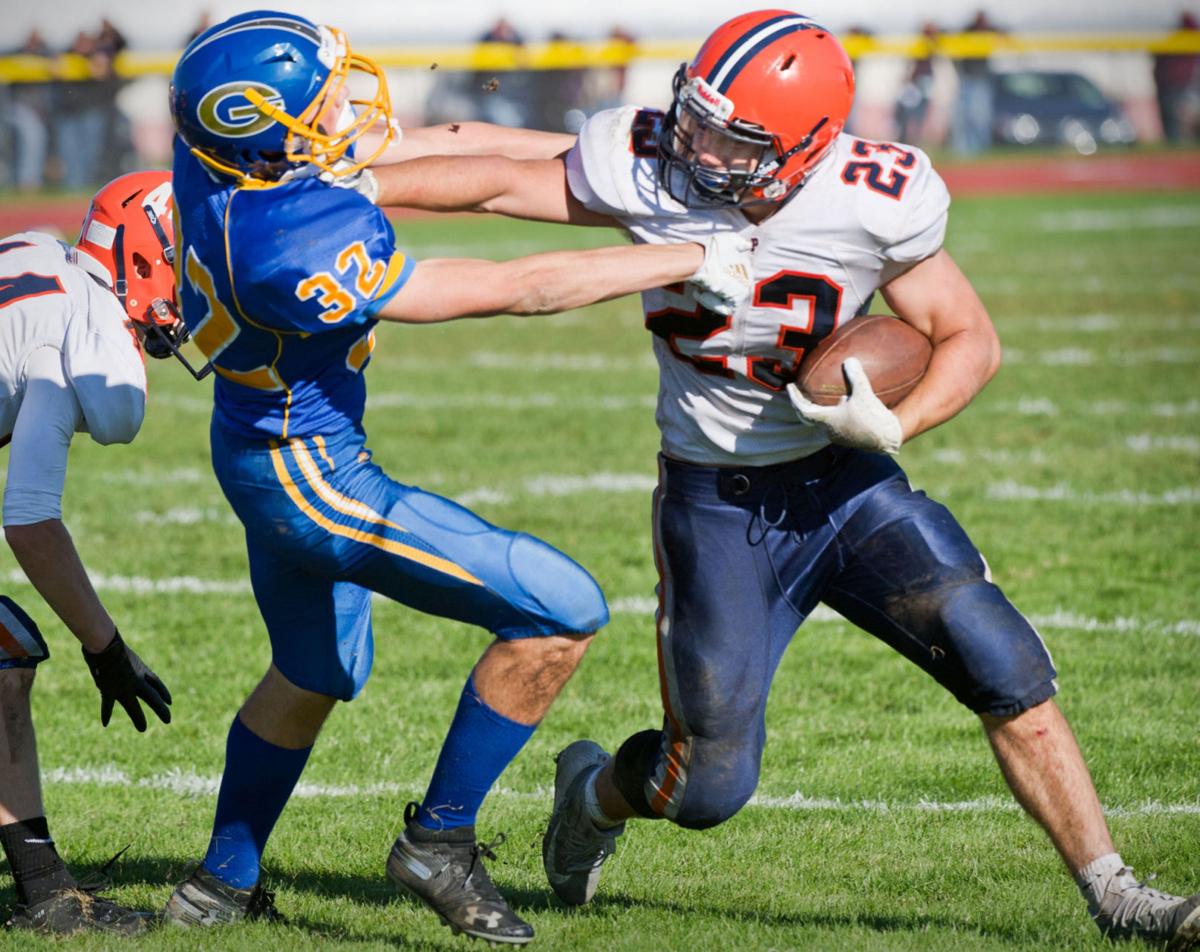 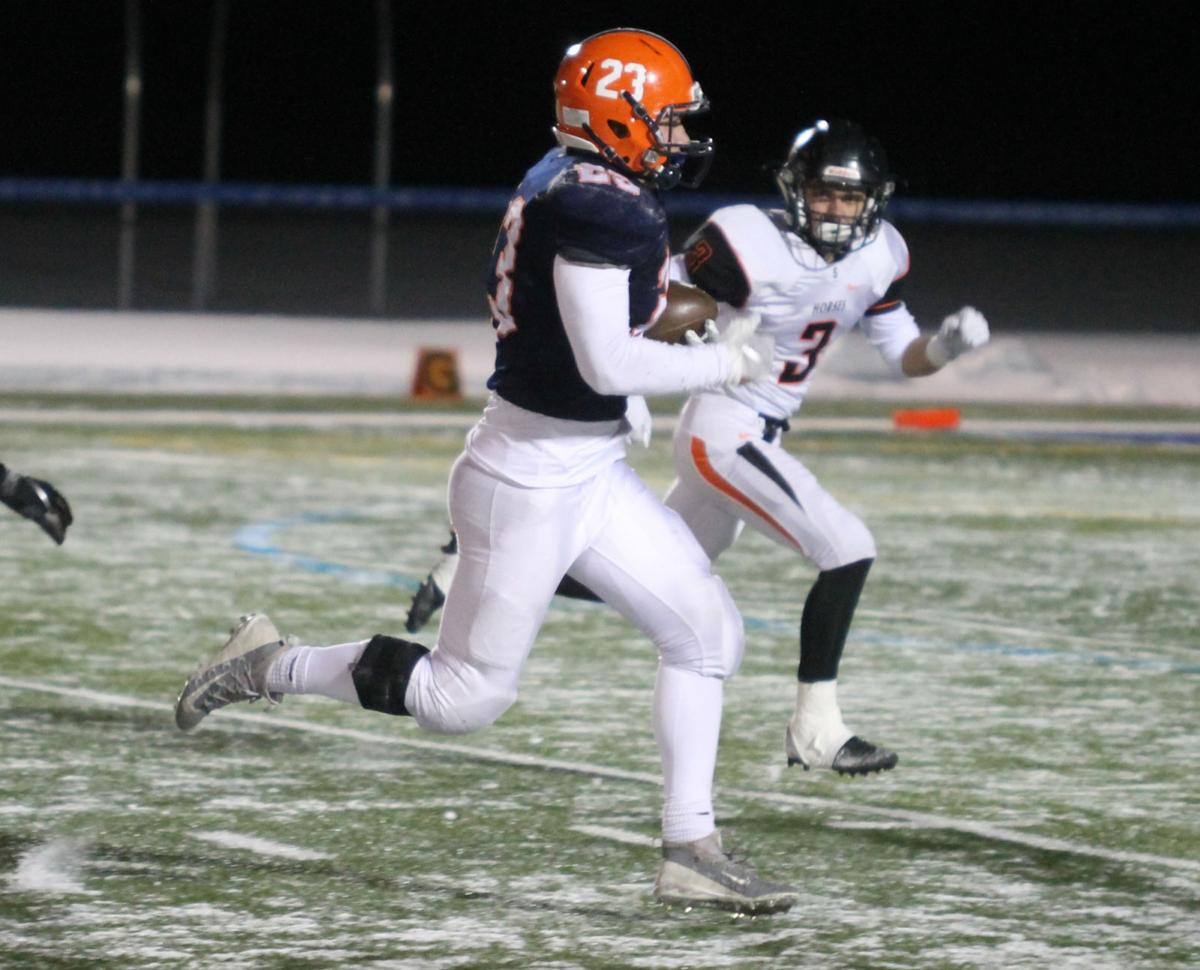 Potsdam’s Will Varney runs for the final touchdown of his high school career last November against Schuylerville in the NYSPHSAA Class A regional final in Ogdensburg. Alain St. Pierre/Courier Observer 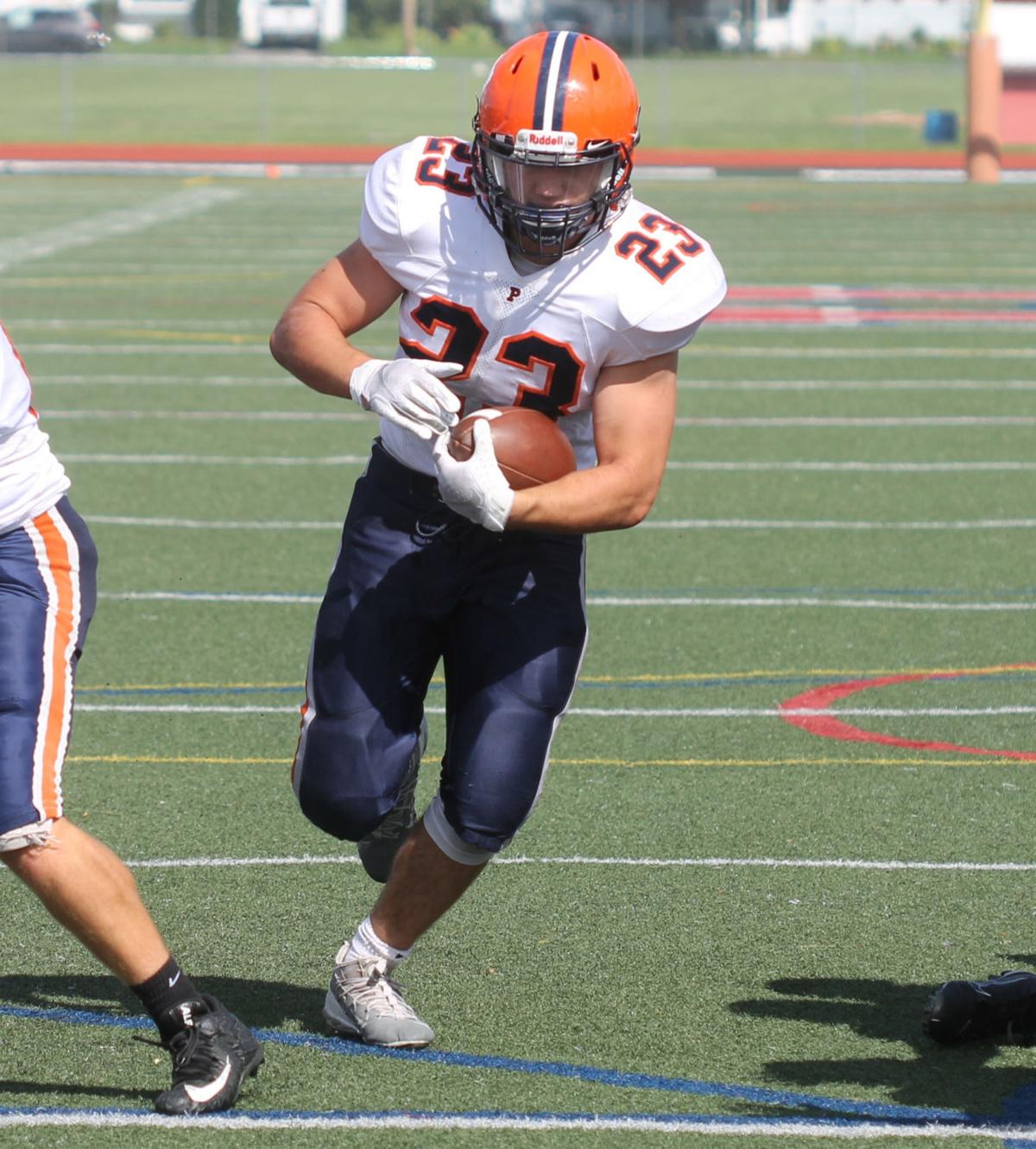 Potsdam’s Will Varney bursts into the end zone during a game at Massena last season. Alain St. Pierre/Courier Observer 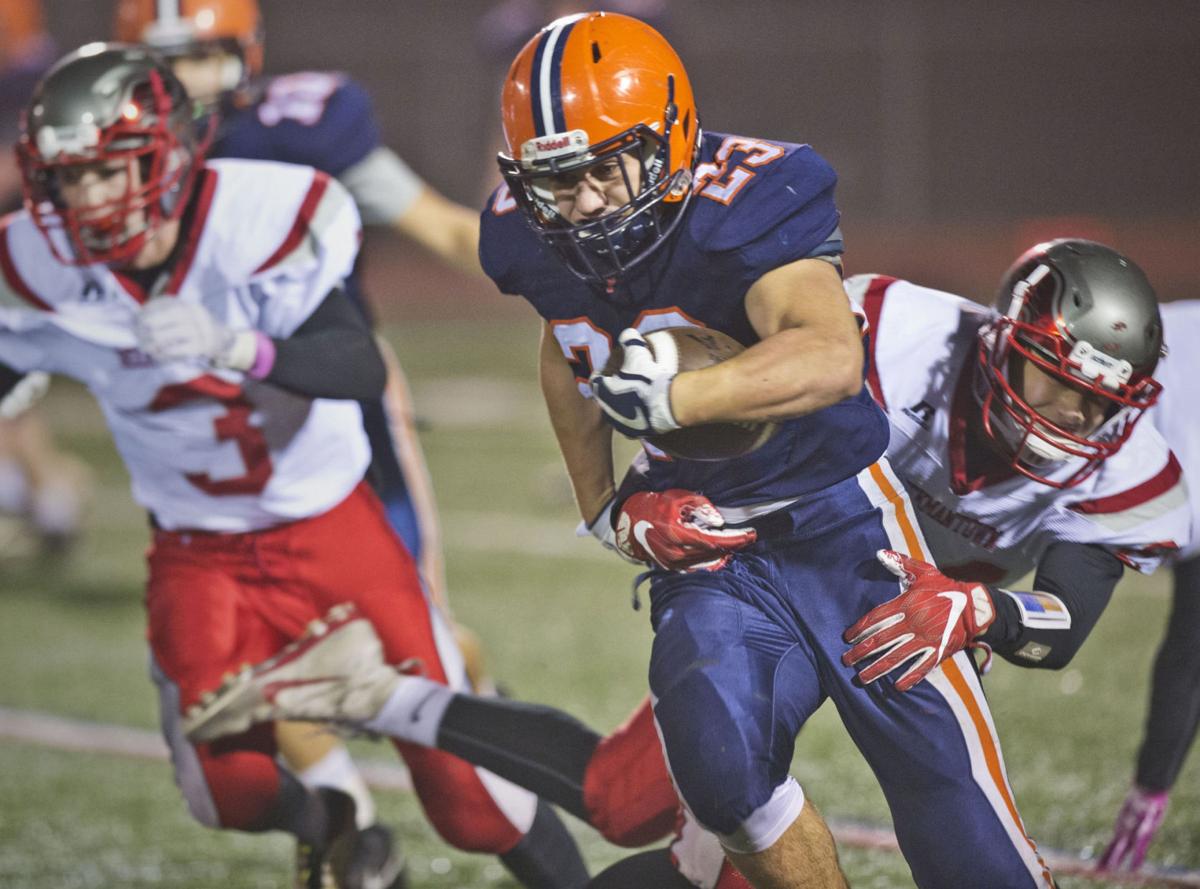 Potsdam’s Will Varney breaks a tackling attempt by Beekmantown’s Jacob Dixon during the first round of the state Class A tournament in 2018. Christopher Lenney/Watertown Daily Times 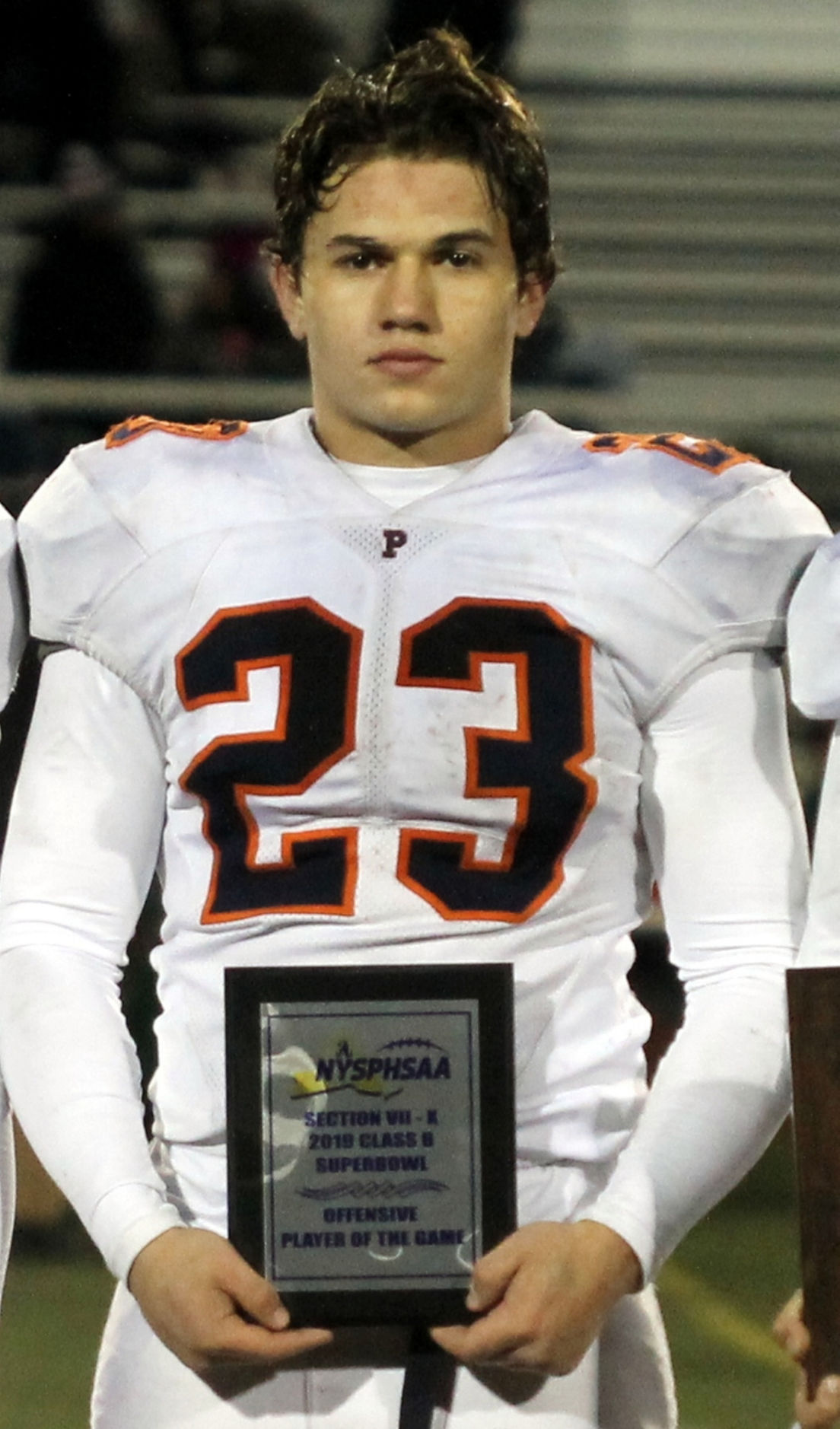 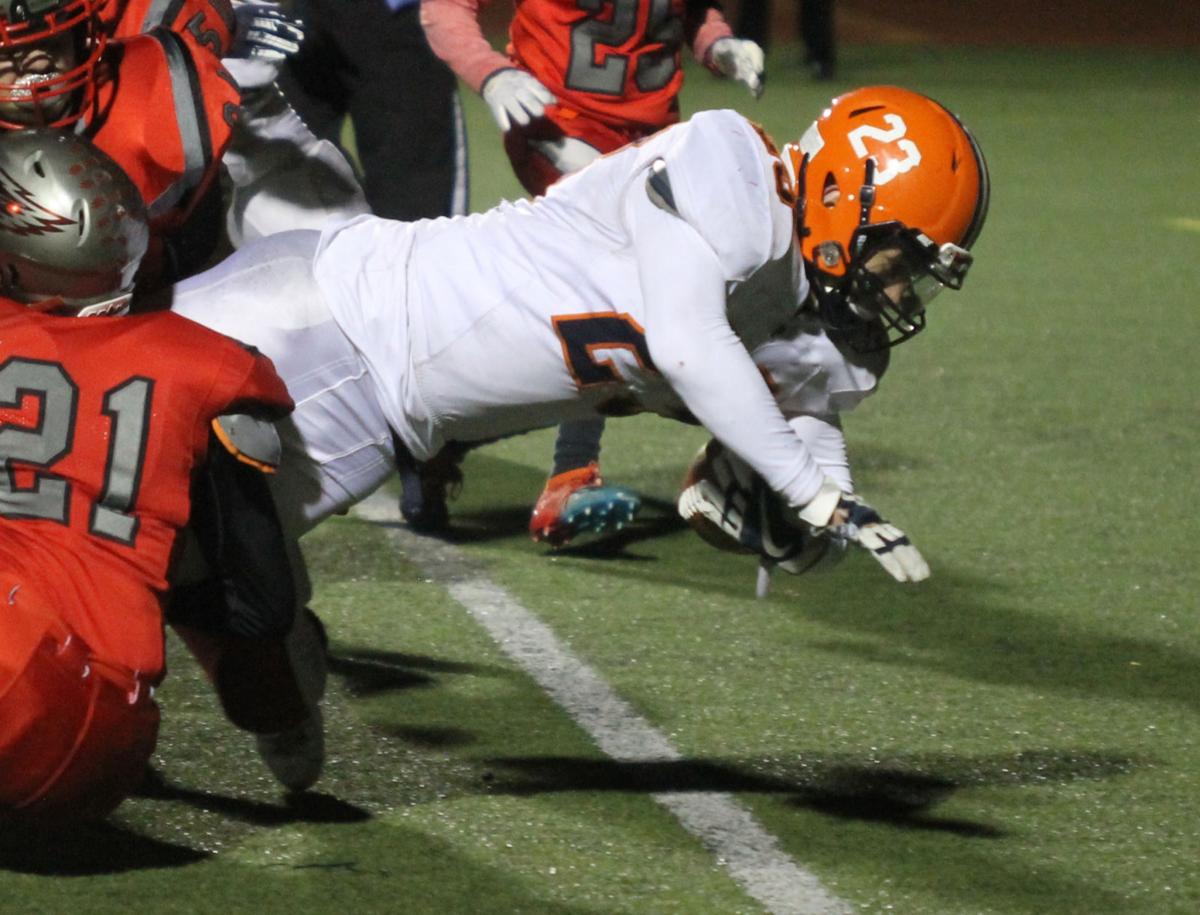 Potsdam’s Will Varney dives across the goal line for a touchdown in a win over Beekmantown in the first round of the state Class A tournament in 2018. Alain St. Pierre/Courier Observer

Potsdam’s Will Varney runs for the final touchdown of his high school career last November against Schuylerville in the NYSPHSAA Class A regional final in Ogdensburg. Alain St. Pierre/Courier Observer

Potsdam’s Will Varney bursts into the end zone during a game at Massena last season. Alain St. Pierre/Courier Observer

Potsdam’s Will Varney breaks a tackling attempt by Beekmantown’s Jacob Dixon during the first round of the state Class A tournament in 2018. Christopher Lenney/Watertown Daily Times

Potsdam’s Will Varney dives across the goal line for a touchdown in a win over Beekmantown in the first round of the state Class A tournament in 2018. Alain St. Pierre/Courier Observer

POTSDAM — Since helping Potsdam make football history last season as a junior, the pieces of a potential college career have quickly fallen into place for Will Varney.

In January, the two-time 1,000-yard rusher for the Sandstoners, who also excels in the classroom, chose to become a member of the Class of 2020 so that he could begin planning for the next stage sooner than later. By the end of April, he committed to the University of Rochester, where he will play football.

“I’ve been playing football and hockey for as long as I can remember but football has always been my favorite,” Varney said. “I really love the team aspect of it. If one part isn’t working, the whole thing doesn’t work so it’s important to do your part. As I got older, playing football was a way to connect with friends. It was also something I could take more seriously to use in the future for college.”

“We had such an awesome season with the seniors that were graduating that I thought it was time to move on with them. My goal has always been to play college football. I just figured, if it was possible to graduate early, why not get a bit of a head start?”

Varney’s decision to shift his football career into a higher gear came as no surprise to his varsity coach, Jim Kirka.

“I’ve known Will for a long time and I knew after football season that it was going to be up in the air whether he’d be back for another year,” he said. “I thought that since he was still just a junior that he might be going to prep school first. He’s a strong student, too, so for him the decision wasn’t rocket science.”

“Unfortunately, we’re going to be losing maybe the best running back in the section and he was only getting better but that’s part of high school football. Obviously, I wish him nothing but the best,” Kirka added.

Varney has been competing at the varsity level in football, hockey and lacrosse since he was a freshman. In his three years in high school, he put together an impressive résumé that includes first team All-Northern Athletic Conference selections the past two seasons for football and this past winter for hockey. A leading contributor to the lacrosse program in each of his first two years, he was due to have a breakout season this spring had the NAC campaign not been canceled due to the coronavirus pandemic.

Varney was named an NAC Athlete of Distinction for hockey. The honor goes to seniors who have maintained a grade average of 90 or better through their entire varsity careers. Since he was still a junior for football, he didn’t qualify yet, and despite the cancellation of lacrosse season, Section 10 is expected to recognize qualifying seniors for spring sports and Varney will likely repeat the honor.

Varney, the son of Cory and Patricia Varney, was a member of the St. Lawrence Thunder youth hockey team that skated to the USA Hockey National Tier II 16U championship in April 2018 in New Jersey. He suffered a serious knee injury in the national final but recovered in time to lead the NAC in rushing that fall after enduring more than two months of strenuous physical therapy and rehab.

But dealing with physical adversity is nothing new for Varney, who was diagnosed with Type 1 diabetes at the age of 12 when he started to show some of the same symptoms that his oldest brother, Chad, experienced prior to his diagnosis several years earlier.

“My mom caught my symptoms,” he said. “I would feel ill after eating and I would feel tired or weak whenever I did physical activity. How we found out that I had it, too, is we used my brother’s tester and it showed by blood sugar was high.”

“It helped a ton having my brother around to show me the ropes. Whenever I was upset about it, he was very supportive and still is to this day,” he added.

As a Type 1 diabetic, Varney’s body is unable to properly process sugar in the blood stream due to a lack of the hormone, insulin, which is produced by the pancreas.

“I wear an insulin pump that is attached to a thin tube that slips under the skin on my stomach,” Varney said. “It was tough getting used to it at first but it’s second nature to me now.”

“I take the pump off whenever I play sports so, I always have a bag under the bench with juice and granola bars. If I start feeling weak or shaky, that means I have low blood sugar and I need to take a break. Once I get something to drink or something to eat, it usually takes five or 10 minutes before I feel better. I’ve had it happen in games, but not every game,” he added. “Having diabetes has helped me become more responsible about taking care of myself.”

Giving up his final year of high school eligibility and committing to play football at Division III Rochester, where he plans to study biology, means he just completed what effectively was his senior season.

“At the time, I didn’t know it was going to be my last season, which is a little sad when I think about it sometimes, but I’m glad we had the kind of year that we did,” he said.

Varney finished with 1,399 yards rushing on 171 carries in helping the Sandstoners defend the Section 10 Class A title last fall after a 6-2 showing in the final NAC regular season standings.

“When Will was a sophomore, he was a good athlete who could run with the ball. Last year, he started to emerged as a great running back,” Kirka said. “His vision really improved and so did his speed.”

The next-to-last game of his high school career wound up being the most memorable for Varney as he led the Sandstoners to a 30-0 victory over Section 7 champion Beekmantown at Plattsburgh High in the first round of the state Class A tournament. In what stands as the first state playoff win in Potsdam football history, Varney shredded the Eagles’ defense for nearly 300 yards and three touchdowns.

“I would definitely say that Beekmantown (game), winning that game the way we did, was the highlight for me. It was a really great feeling,” Varney said. “We knew how much it meant to coach Kirka. It was huge for him.”

The Sandstoners went on to drop a 28-8 decision to Section 2 champion Schuylerville in the next round of the state tournament with Varney racing to the end zone from 38 yards out midway through the fourth quarter for the final touchdown of his high school career.

By committing to Rochester, Varney joins a program that is in a rebuilding stage under third-year coach Chad Martinovich. With a lineup that relied heavily on underclassmen, the Yellowjackets went 0-10 overall last season.

“We are in a rebuilding process and that’s one of the reasons that I was brought in to coach here,” said Martinovich, who helped elevate a foundering football program at MIT during his nine-year tenure there. “We’ll be better. We have the blueprint for turning things around but it takes time a lot of hard work.”

One of the underclassmen in the Rochester lineup was former Potsdam Central standout Braydon Bush, a freshman defensive back who was one of just eight Rochester players to start every game in 2019.

“Braydon Bush tipped us off that Will was looking to graduate early. I’m not sure exactly when it was, but it was later in the recruiting season than usual,” Martinovich said. “After seeing his film, we definitely were interested in having him join our program. He plays with strength and physicality and has the combination of size and speed that we look for. We had him down for a visit then, low and behold, he decided to come here.”

“Right now, we’re hoping to start him off as a running back,” Martinovich added. “It will definitely be a different offense than what he’s used to but we’re sure he has the versatility to adapt to what we do. We’re excited to have him here.”

Varney has already held online meetings with members of the Rochester coaching staff and has been given a preseason workout schedule that includes daily running and lifting drills. The opening day of training camp is scheduled for August 11.

“Their playbook is a little more extensive than coach Kirka’s,” Varney said. “But I’m excited to learn.”