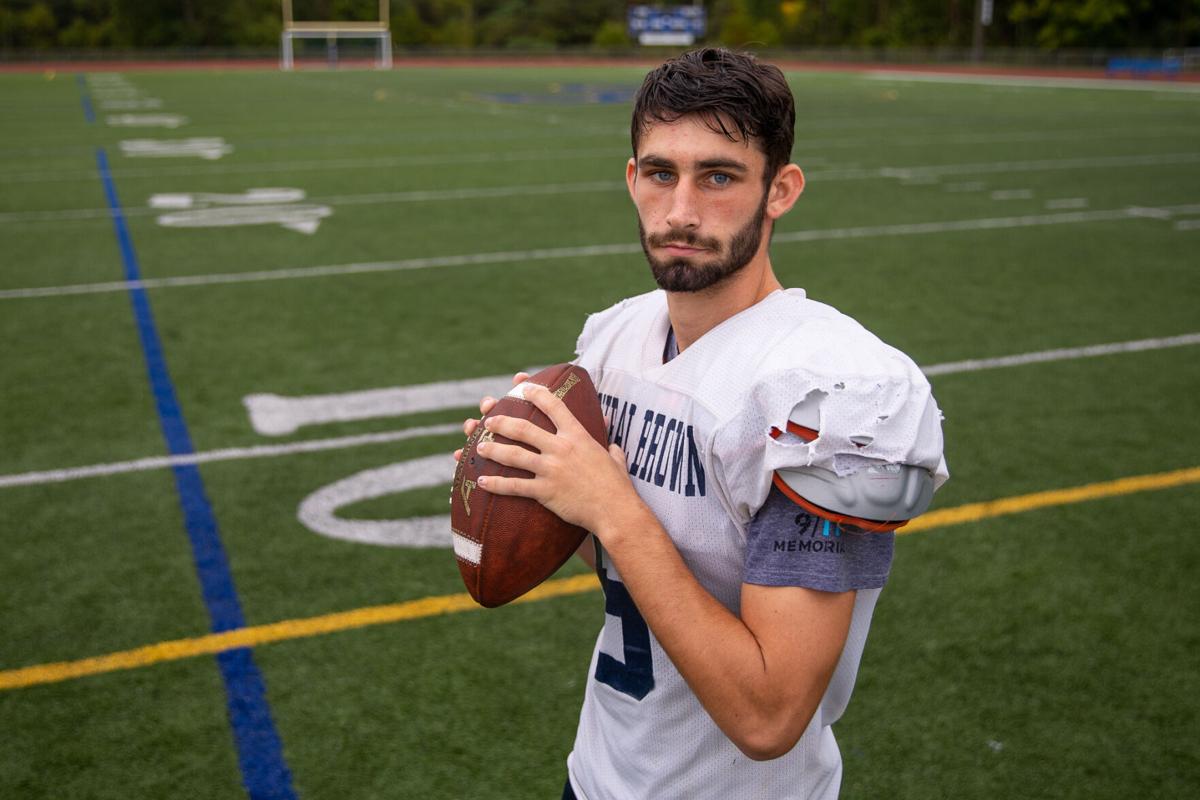 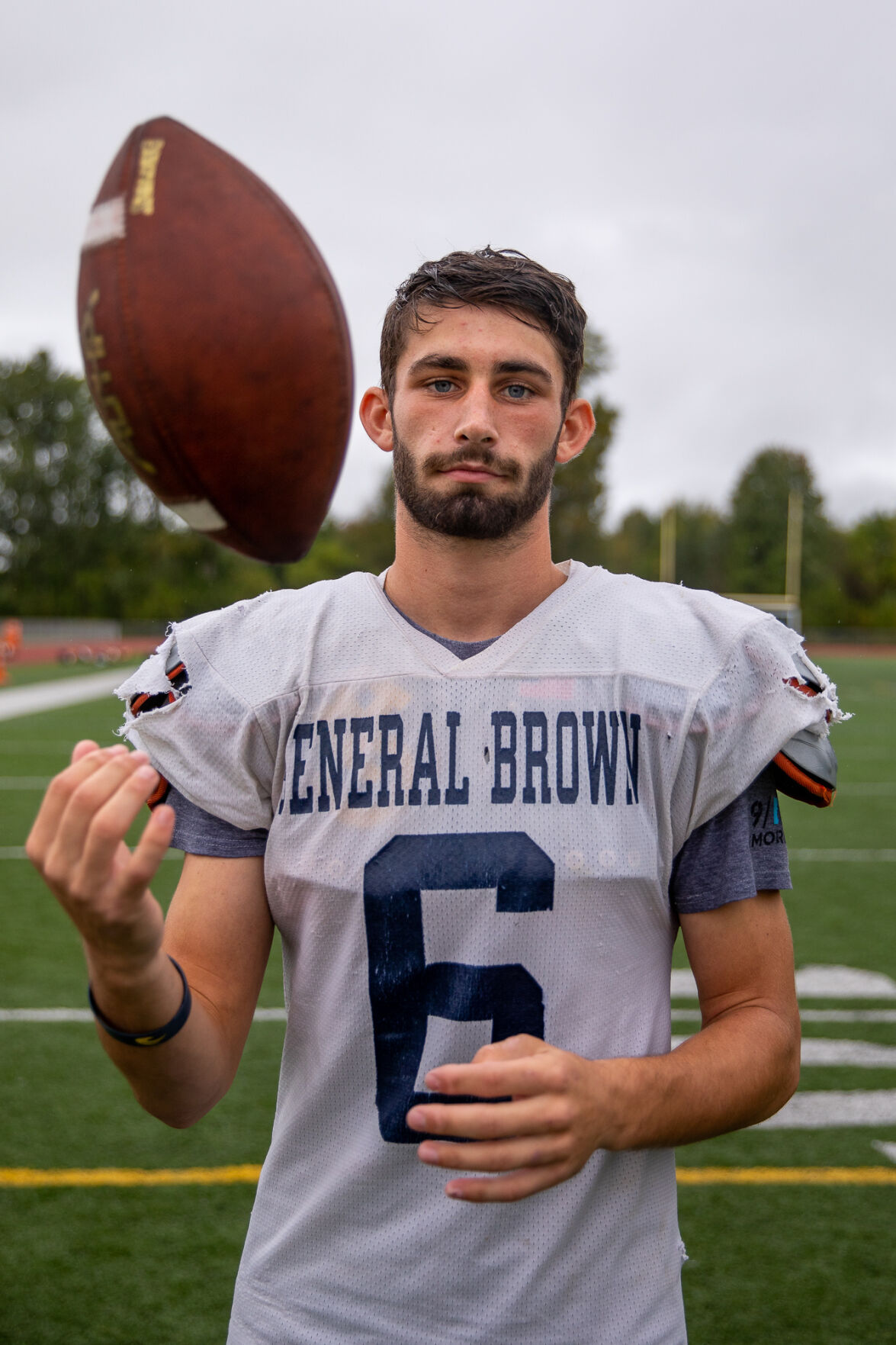 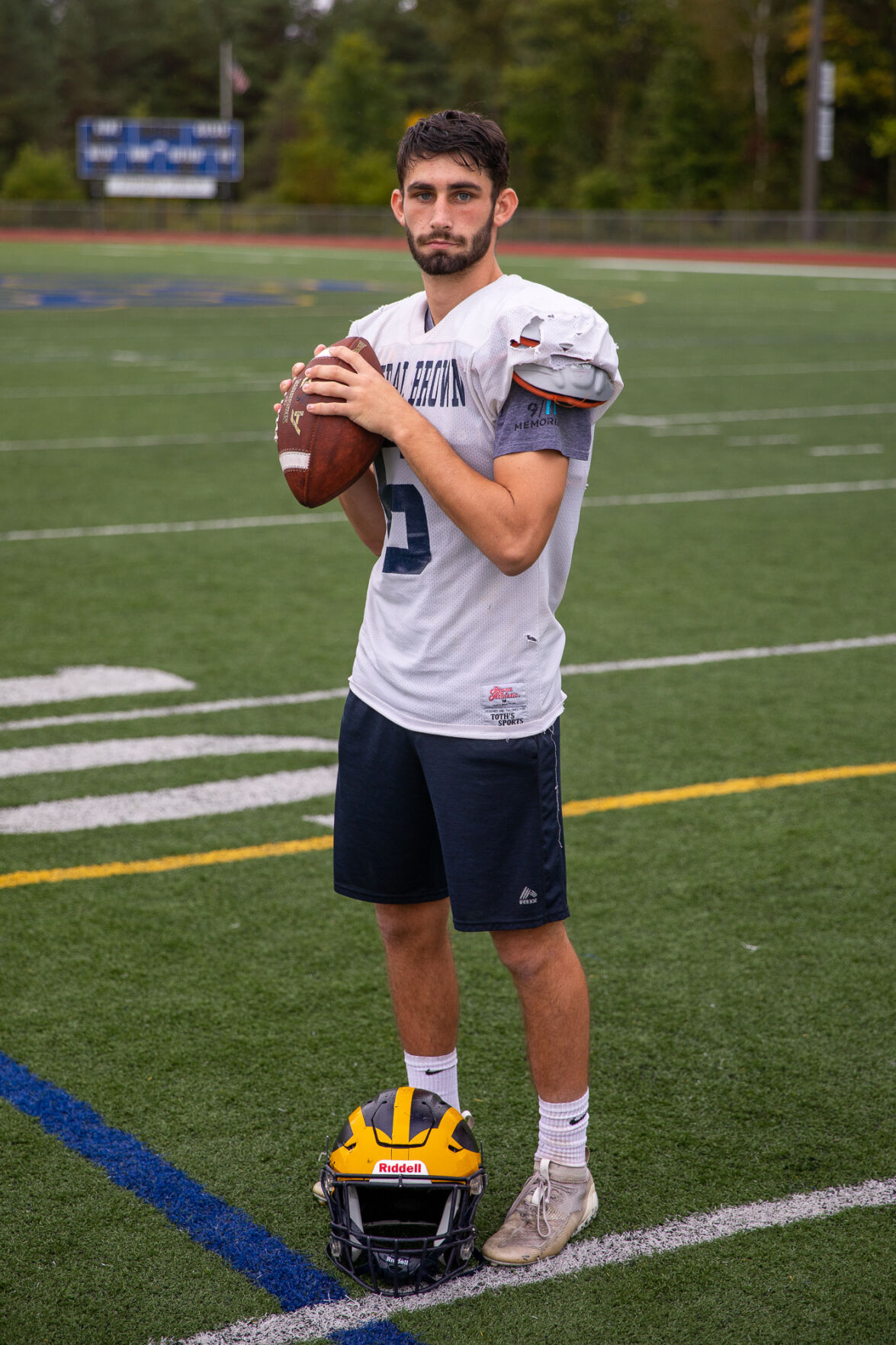 DEXTER — Displaying a resolute, but calm personality, Eli Rawleigh has emerged as a team leader for the General Brown football team.

This ascension in leadership didn’t happen overnight for Rawleigh, who starts at both quarterback and strong safety.

Rawleigh holds the distinction of being the only athlete at General Brown to have played varsity football as an eighth-grader.

He got off to quite a start back then, as he stood out on both sides of the ball in is varsity debut, as part of a Lions’ team that advanced to a Section 3 that game.

“His first varsity game, he played South Jeff and he had a touchdown run and an interception,” Lions coach Doug Black said. “He showed obviously that he belonged. He’s the only eighth-grader we’ve ever had in program history to play varsity.”

“For sure, that team that year really brought me in and made me feel welcome, even being so young,” Rawleigh said. “And to be on that sectional finalist team was really an honor.”

Now fast forward to 2021 as General Brown is off to a strong 2-0 start in Section 3’s Class C2 division.

The Lions will host Sherburne-Earlville (0-3, 0-1) at 7 tonight in a division game that will also serve as their home opener.

“It’s going pretty good, we’ve got a young team,” Rawleigh said. “We’re rebuilding a little bit, we lost a good amount of seniors last (season), but for what we’ve got so far, I think it’s been going pretty well.”

This season, Rawleigh has helped guide General Brown to wins over Mount Markham and Holland Patent.

After the Lions yielded the game’s first two touchdowns at Mount Markham on Sept. 11, they stormed back for a 43-20 victory. General Brown then outlasted Holland Patent, 28-6, last Saturday.

“The Holland Patent game was a great road win, a great team effort,” Rawleigh said. “I think we spread the ball around, we had like five kids with over 60 rushing yards, probably over 12 carries each.”

“It’s been pretty solid,” Black said of General Brown’s start this season. “It kind of caught us off guard, we didn’t have a lot of high expectations going into the year. There are a lot of new players in key positions for us, so we were kind of leveling our expectations a little bit and the kids have played very well and are getting better every week.”

Rawleigh has showed his versatility over the years as two seasons ago as a sophomore he stepped in as starting quarterback when starter Nate Heller was injured.

In the spring, Rawleigh went back to playing at running back when Heller returned, but this season, Rawleigh is now at quarterback.

“I’ve had a good time, it’s never something that I really thought that I’d be playing,” Rawleigh said of playing quarterback. “When he threw me back there, I was 100 percent ready to take that role on.”

“He was an all-league defensive back for us,” Black said of Rawleigh. “He’s done a little bit of everything for us over the course of his career with us,” Black said.

Rawleigh has previously played as a defensive back, but returns this season at strong safety.

“I wouldn’t say it’s like the quarterback of the defense, because that’s definitely the middle linebacker, for sure,” Rawleigh said. “More of just a leadership role for our younger defensive backs, as the corners to know what they have to do on certain coverages and stuff like that.”

“He plays the pass and he comes down in the box and plays the run for us very well,” Black said. “The last three years he’s been one of our leading tacklers.”

Rawleigh has a team-high two interceptions and Kaleb Natali, a junior cornerback, has returned a pick for a touchdown.

The Lions have deployed a balanced offensive attack, mainly anchored around a running game.

While Rawleigh is a key component of the attack, junior wideout Gabe Malcolm leads the team on the ground with 152 rushing yards on 19 carries, and senior fullback Nick Rogers has ran for 130 yards on 17 catches — and both scored a pair of rushing touchdowns.

“We’re doing all right, we really spread the ball around,” Rawleigh said. “I think even with our young kids, we have a decent bit of talent, but it’s still more of a rebuilding year I think. But I think with what we have with our younger kids and our couple seniors that we have, we’re making pretty good progress.”

So far this season, Rawleigh has thrown for two touchdown passes and has run for another, totaling 132 yards on the ground on 21 carries.

“The thing about up here is General Brown football has just been so much different for me than anywhere else I’ve played,” Rawleigh said. “The brotherhood and the family that we have up here is just awesome, it’s made me love the game even more.”

Black calls Rawleigh, who hopes to play football at the college level, a smart, as well as a humble player.

“His football IQ is off the charts, he could play any of the offensive skill positions for us,” Black said. “He knows the offense inside out and kind of the same on defense, he’s pretty versatile for us there, too.”

“Coach Black has been there for me ever since he asked me to manage the team in seventh grade,” Rawleigh said. “And then (previous players) Tom Dupee and Dom Lutz, they were really there for me all through when I was in eighth and ninth grade. They were big role models for me.”

After teams in Section 3 and throughout the state missed a fall season in 2020 because of the COVID-19 pandemic, General Brown returned to play in a Fall II season in spring, faring 3-2.

Rawleigh and his teammates are looking forward to the team’s home opener that they hope will be attended by a full complement of spectators. The Lions hosted two games in the Fall II season, but attendance was limited because of COVID-19 protocols.

“The school and our managers have been doing some things for the student section, so we’re hoping that we get a decent turnout,” Rawleigh said. “But we’ll play with no fans, or with fans, but we’re hoping people will come out and watch.”

With tonight’s game, General Brown will begin a four-game homestand before completing its regular season with a game at rival Lowville on Oct. 21.

“The community here is just crazy, there’s so many General Brown alumni that come back and support us,” Rawleigh said.