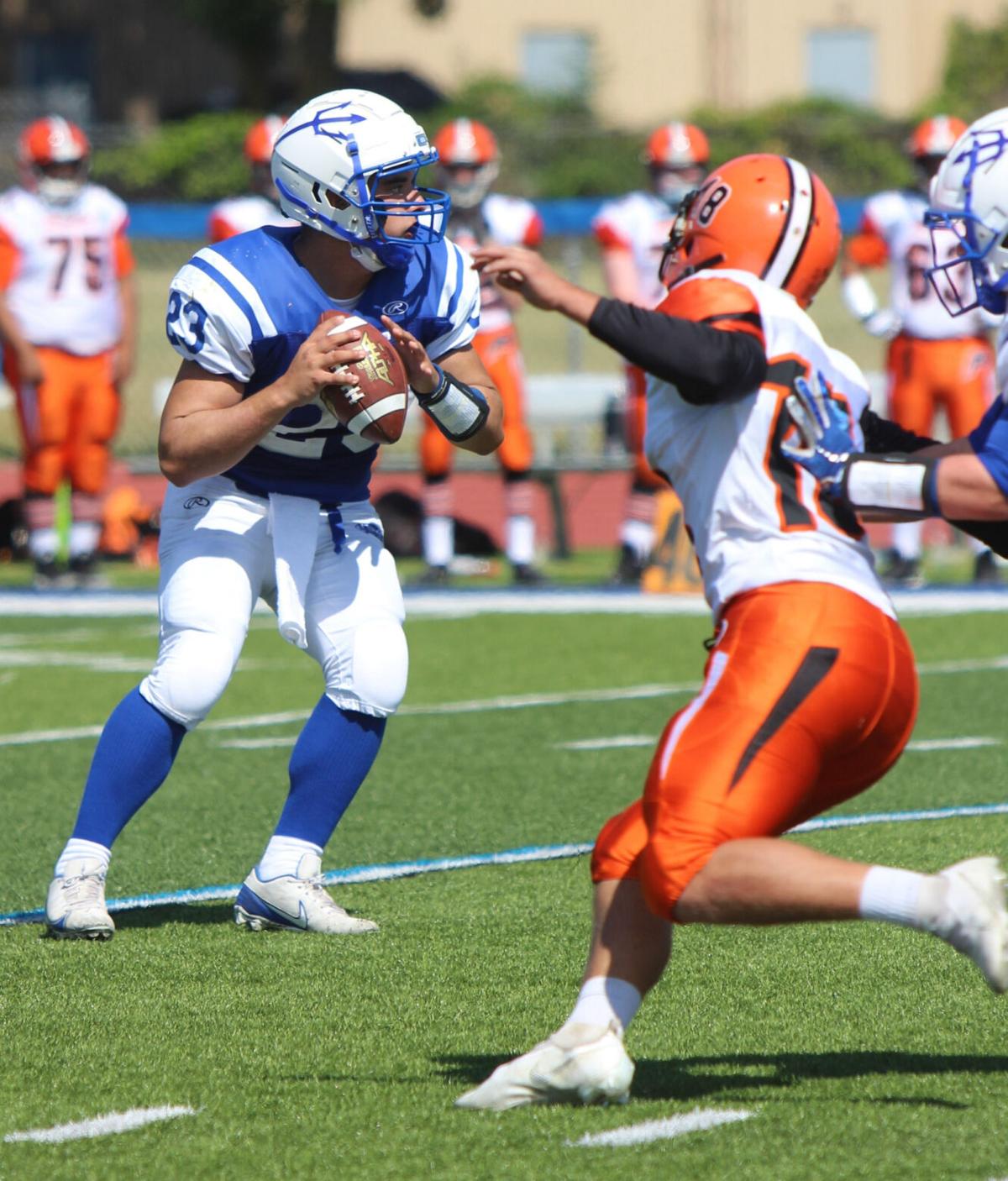 OFA quarterback Tristan Lovely steps up in the pocket on a passing attempt in a nonleague game against Plattsburgh High. Dave Shea/The Journal 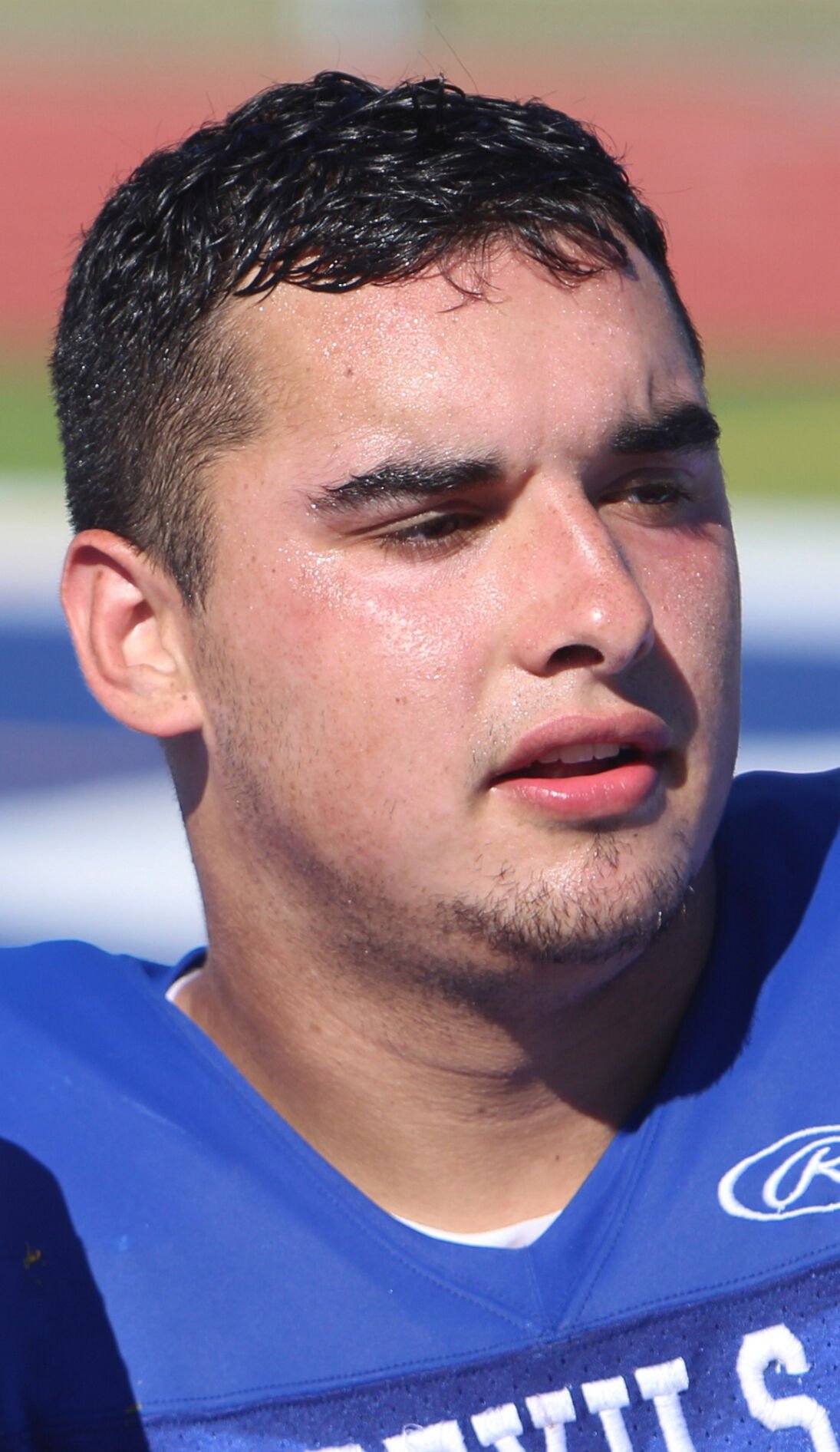 OFA quarterback Tristan Lovely steps up in the pocket on a passing attempt in a nonleague game against Plattsburgh High. Dave Shea/The Journal

OGDENSBURG — In his years as the Ogdensburg Free Academy football coach, Matt Tessmer has seen a handful of players come up as freshmen and be impact players for four years.

The latest in the list is current senior Tristan Lovely, a quarterback and linebacker for the Blue Devils.

Past players who also pulled off the achievement include Jared Morrow, Joey Dalton and Josh Lipstein, who all became all-state players in their careers.

“We have had freshmen who wanted to play (varsity) before, and we let them,” Tessmer said. “They may or may not play very much. Tristan came up (in eighth grade) when Jared Barr got injured in a scrimmage as a senior. Tristan was unbelievable in practice, as an eighth-grader. He was giving the older kids fits. The next year the older kids were saying, ‘This guy has got to play with us.’ ”

Lovely, a Heuvelton student, has played a key role with OFA throughout his varsity career. He spend his first two seasons on offense as a running back and was one of a handful of players who made impacts on OFA’s 2019 team, which went 6-1 in the Northern Athletic Conference.

The Blue Devils graduated a lot of talented players from their 2019 squad and last year’s season was limited to two games that were played in the spring.

Lovely made the biggest play of the opening game in a loss to Gouverneur.

He moved to quarterback last spring and, after two botched snap plays, one of which Lovely takes credit for the mistake on, the Blue Devils were pinned on their own 2-yard line late in the first half.

There was another tough snap, this one Lovely snagged, and he tried to just run enough to get out of his own end zone and wound up turning the play into a 98-yard touchdown run.

It was a play only Lovely could make and his style of play was tough on the coaches at first. He patterns his game after former Pittsburgh Steelers running back Le’Veon Bell.

“The coaches didn’t like the way I run,” Lovely said of the start of his career. “They like you to hit the holes and I was more of a patient running back. OFA never really had a guy that ran like me and my style.”

“I asked him if he wanted to try it,” Tessmer said. “He’s just a really good athlete. We had graduated everybody so I asked if he thought he’d be interested in playing quarterback.”

Lovely, who is one of the more physical quarterbacks in the area, has enjoyed the move and said he’s still working on the passing aspect of the position.

“I was thinking once everybody left (in 2019) that I may have to do it,” Lovely said. “I like it. I like having the ball in my hands every single play. I find running much easier because you can just look for the hole, you don’t have to worry about taking a handoff. Reading the field (on passes) is something I definitely have to work on. I watch film and see so many people I missed. Hopefully by the end of the season I can read the field.”

Lovely went 5-for-13 for 72 yards and completed a 2-point conversion to Drew Costello. He only carried the ball seven times for 18 yards in a defensive contest.

The only two Class A schools in Section 10 are Watertown and Canton. The Cyclones won the last championship in 2019, beating Canton 42-28.

Watertown went 4-3 in its return to the NAC and finished fourth. The Cyclones will be led by seniors Deante Hall (running back, defensive back), Joel Davis (quarterback, DB) and Cain Roberts (Tight end, linebacker). Junior Tristin Clifford (offensive and defensive line) is also a key player.

Canton was 2-5 in 2019 and has a new coach in Corey Maxner, a longtime assistant in the program. The Golden Bears don’t have a large roster and had to cancel their first junior varsity game to have enough players on the varsity roster. Some of Canton’s leaders are Jonah Longshore (TE/defensive end), Zach VanBrocklin (RB/DB) and James Bailey (OL/DE).

Potsdam went 5-2 two years ago and defeated Malone 39-6 in the Class B title game.

The Huskies, who were 0-7 two years ago, should be stronger this year. When Malone’s current roster was a junior varsity team, it won the JV title.

Massena, which returns its quarterback from two years ago, Dominic Monacelli, should improve on its 1-6 divisional record in 2019.

Gouverneur, which was 7-0 in the division two years ago, won the Class C title with a 25-6 win over OFA. The Wildcats reached the state title game.

OFA is always one of the top teams in Class C and went 6-1 two years ago. Some of the Blue Devils key players are quarterback Tristan Lovely, kick returner Justice McIntyre, running back and linebacker Drew Costello, linebacker Derrick Barr and wide receiver and defensive back Adam Calton.