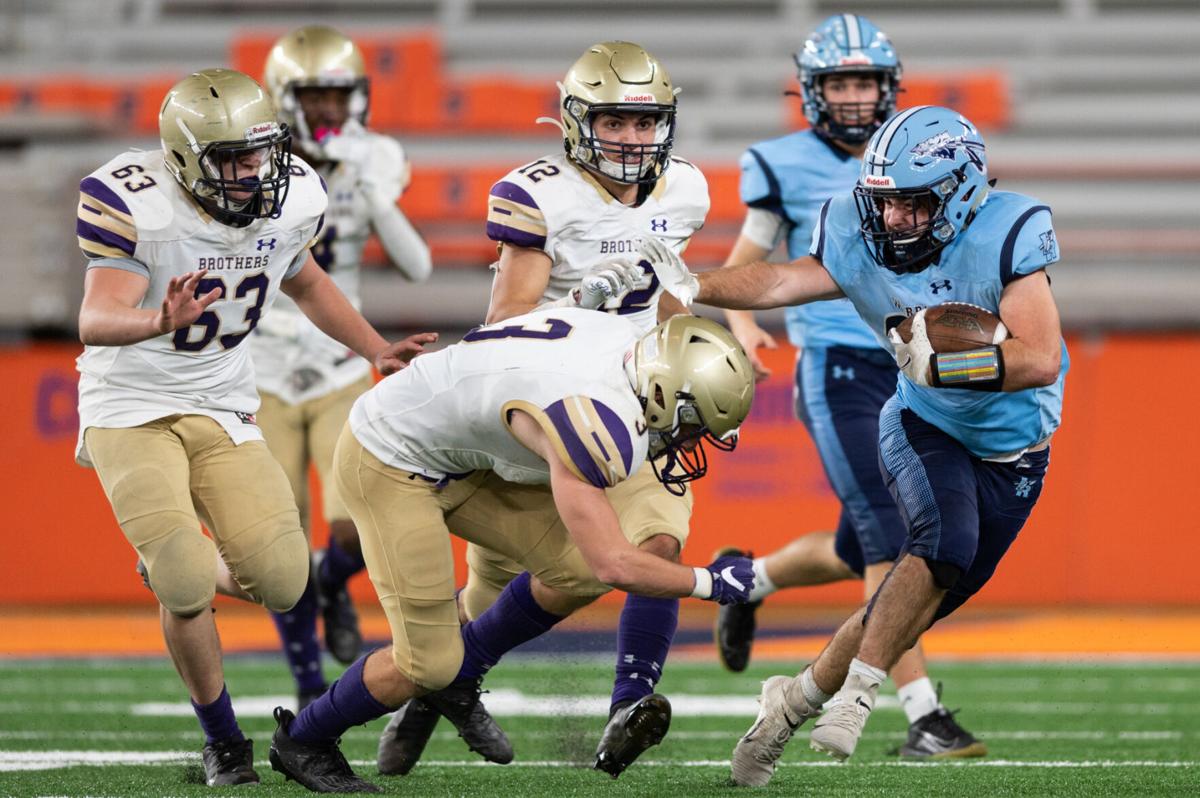 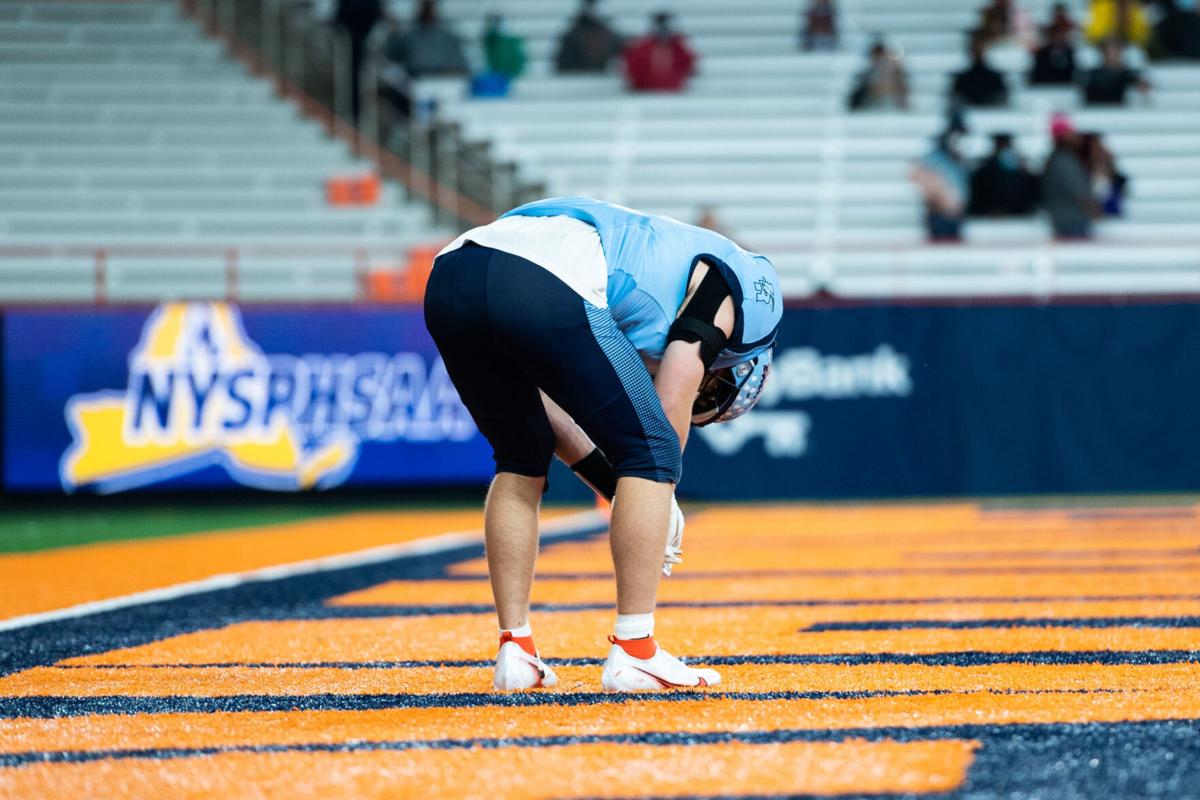 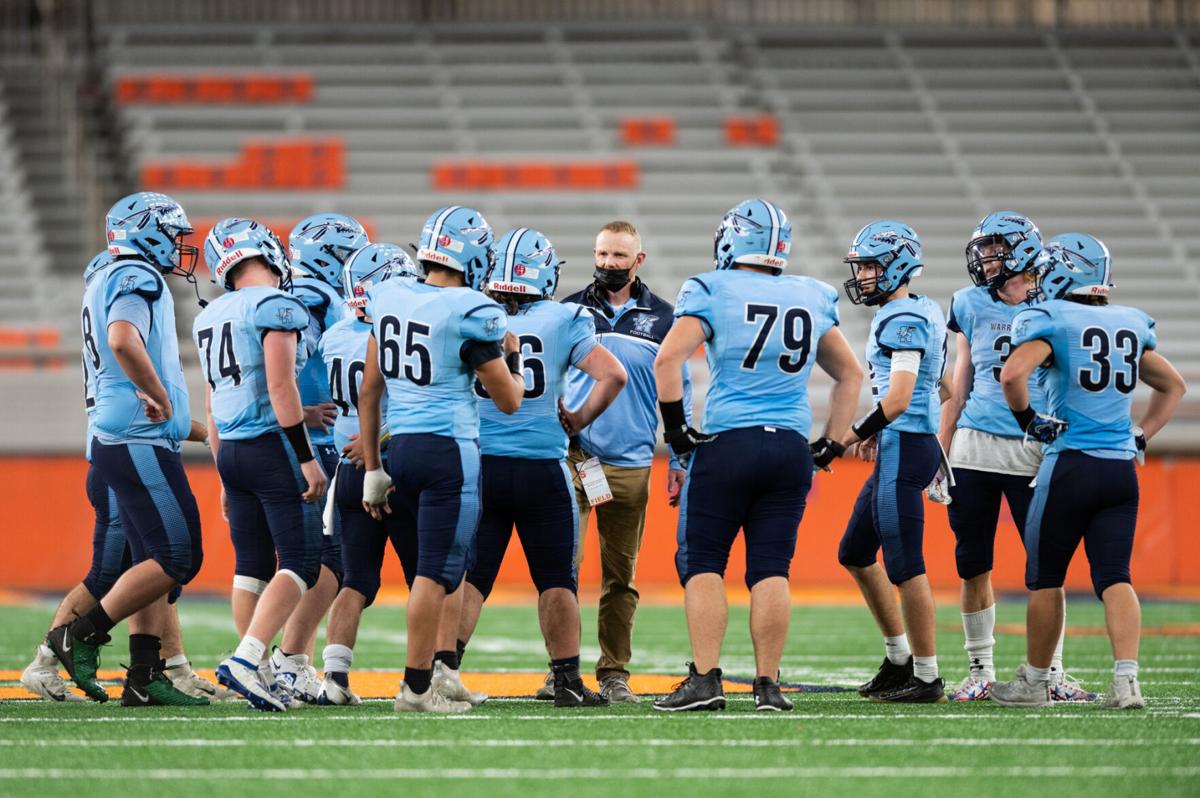 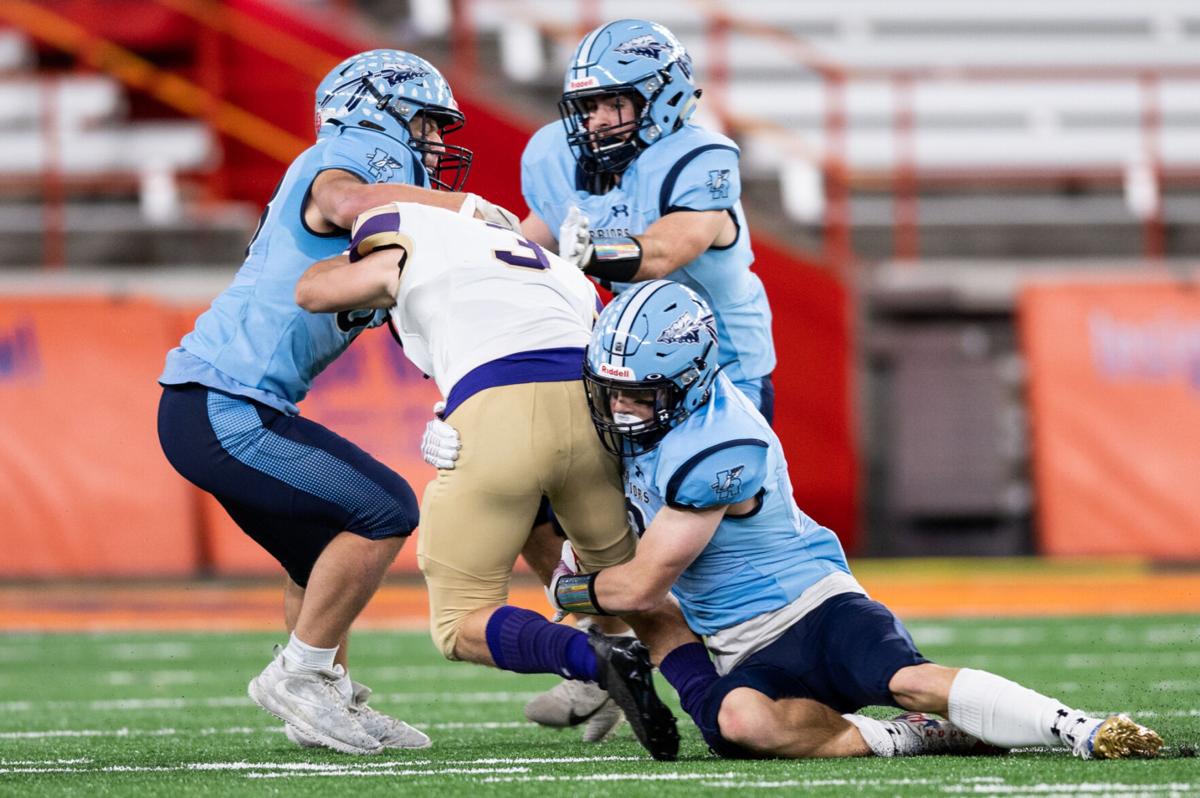 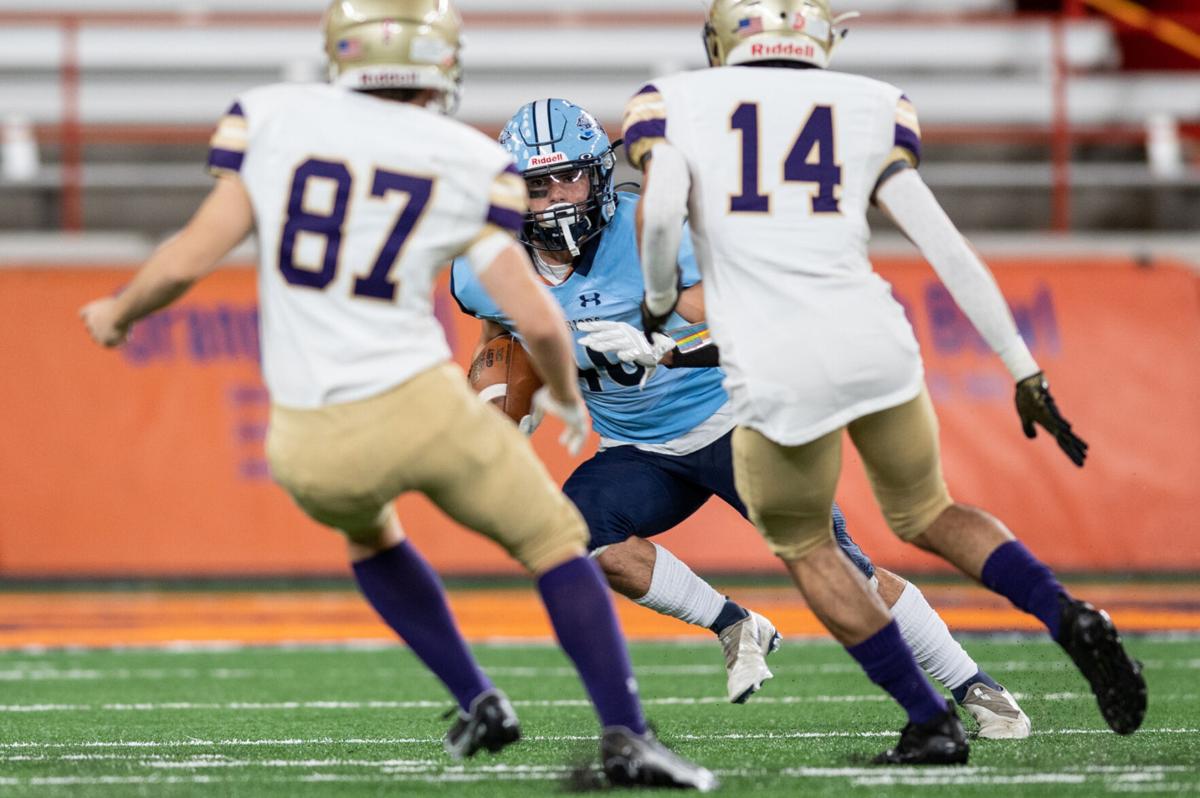 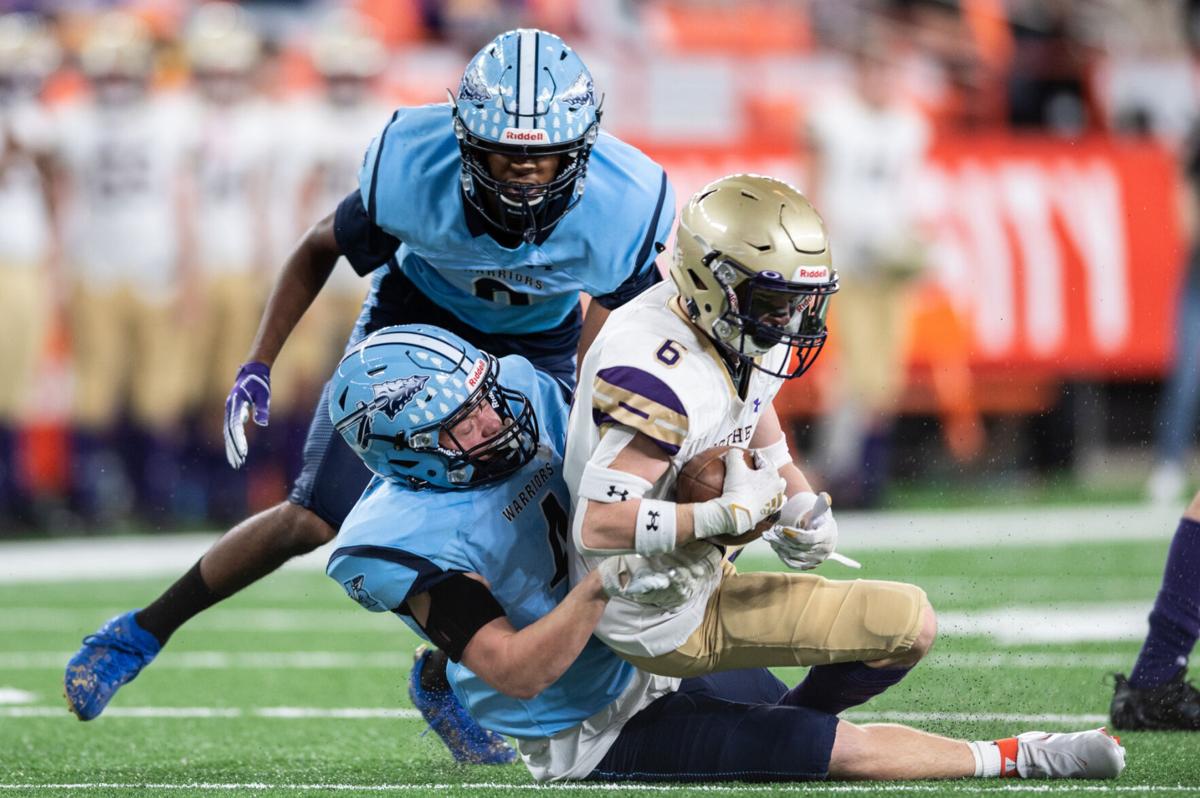 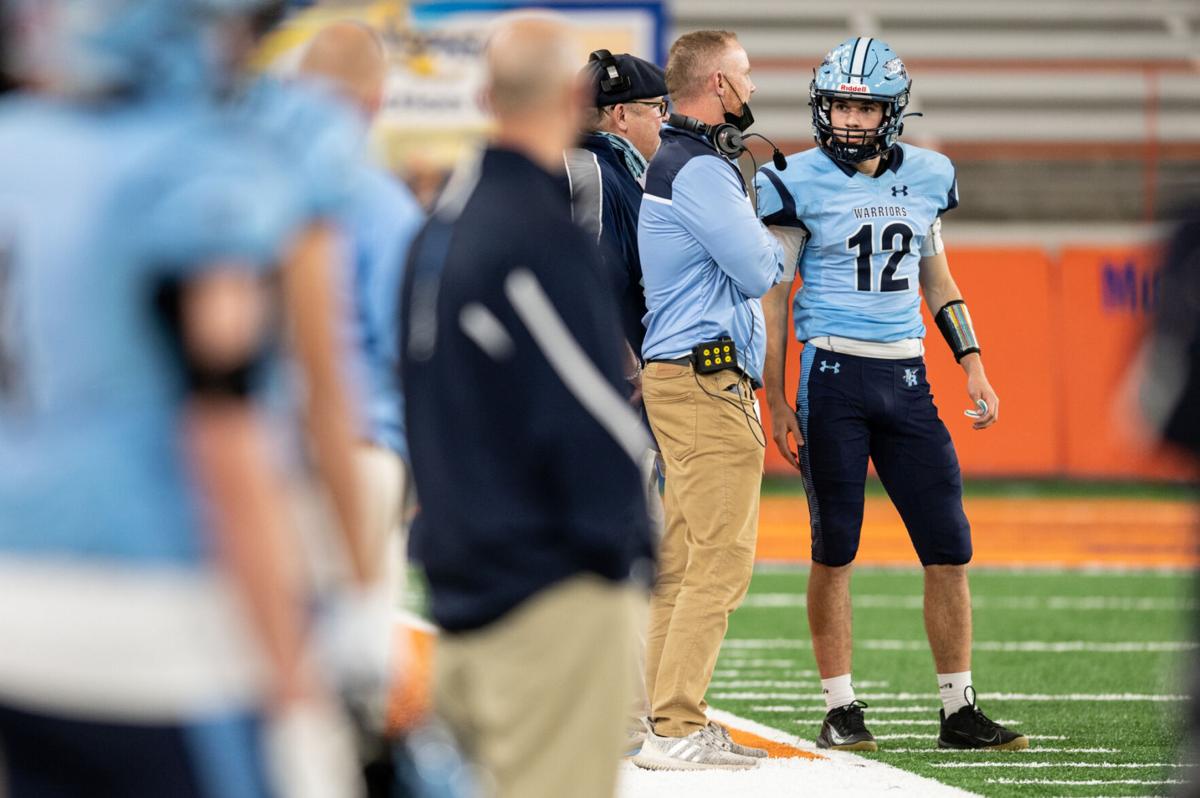 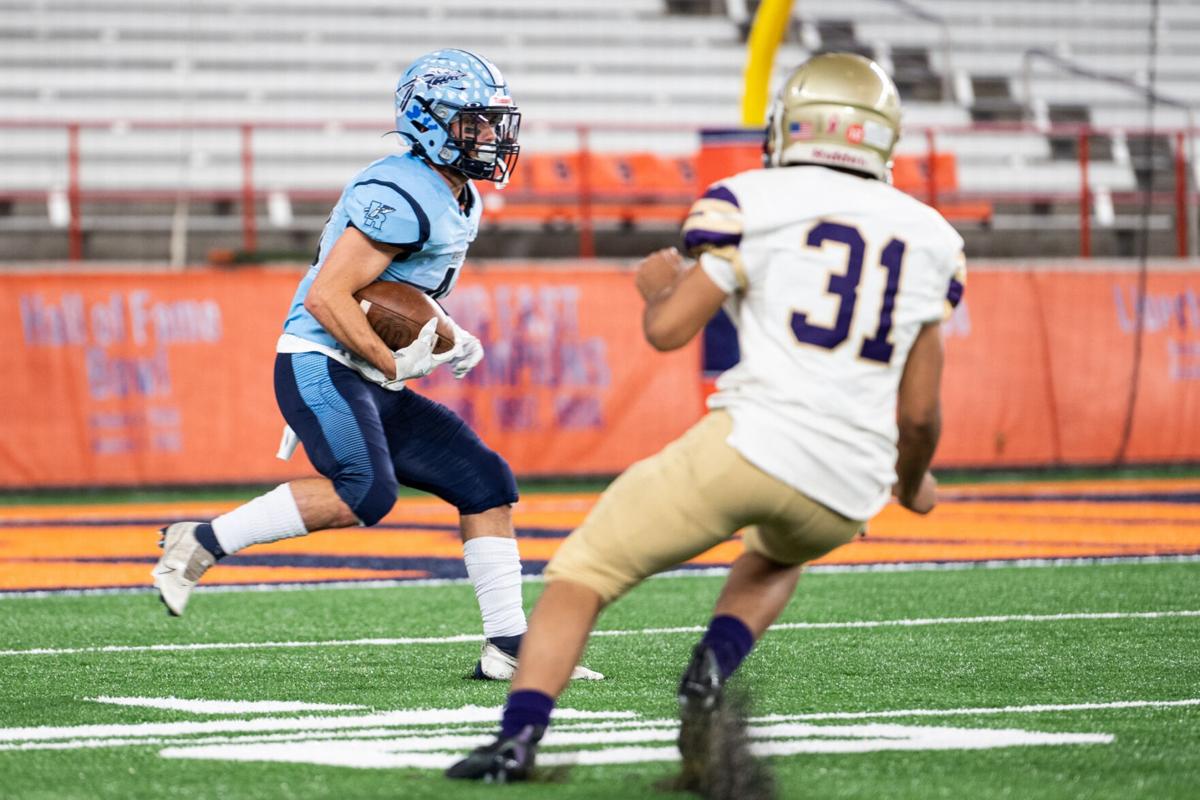 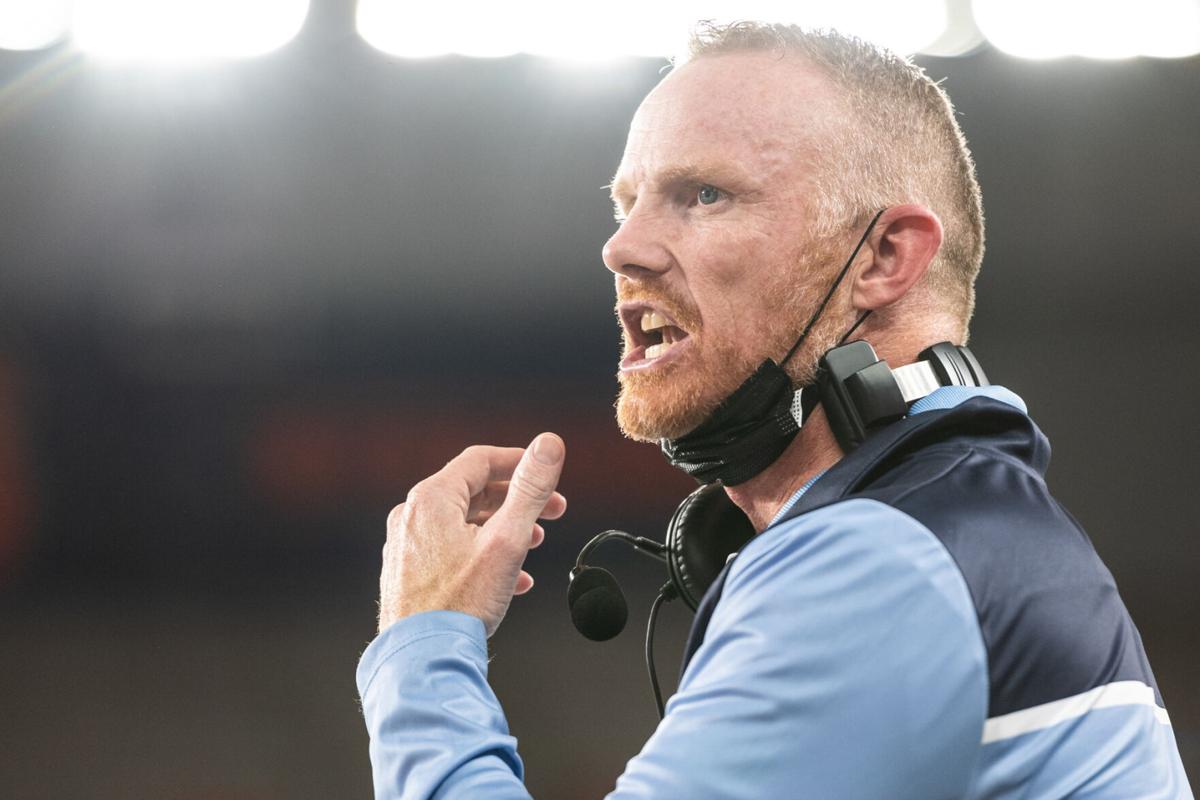 Indian River head coach Cory Marsell calls out to his team during the Section 3 Class A championship game against Christian Brothers Academy on Friday night at the Carrier Dome. Todd F. Michalek photo 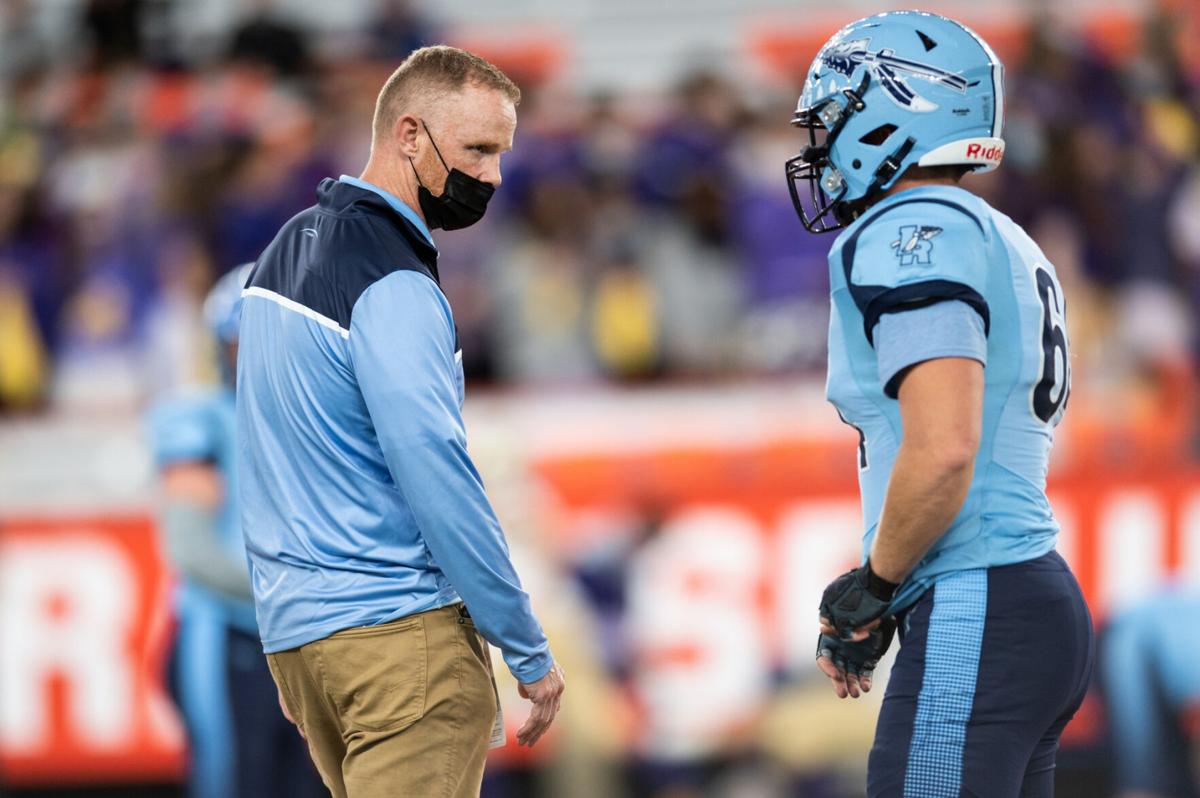 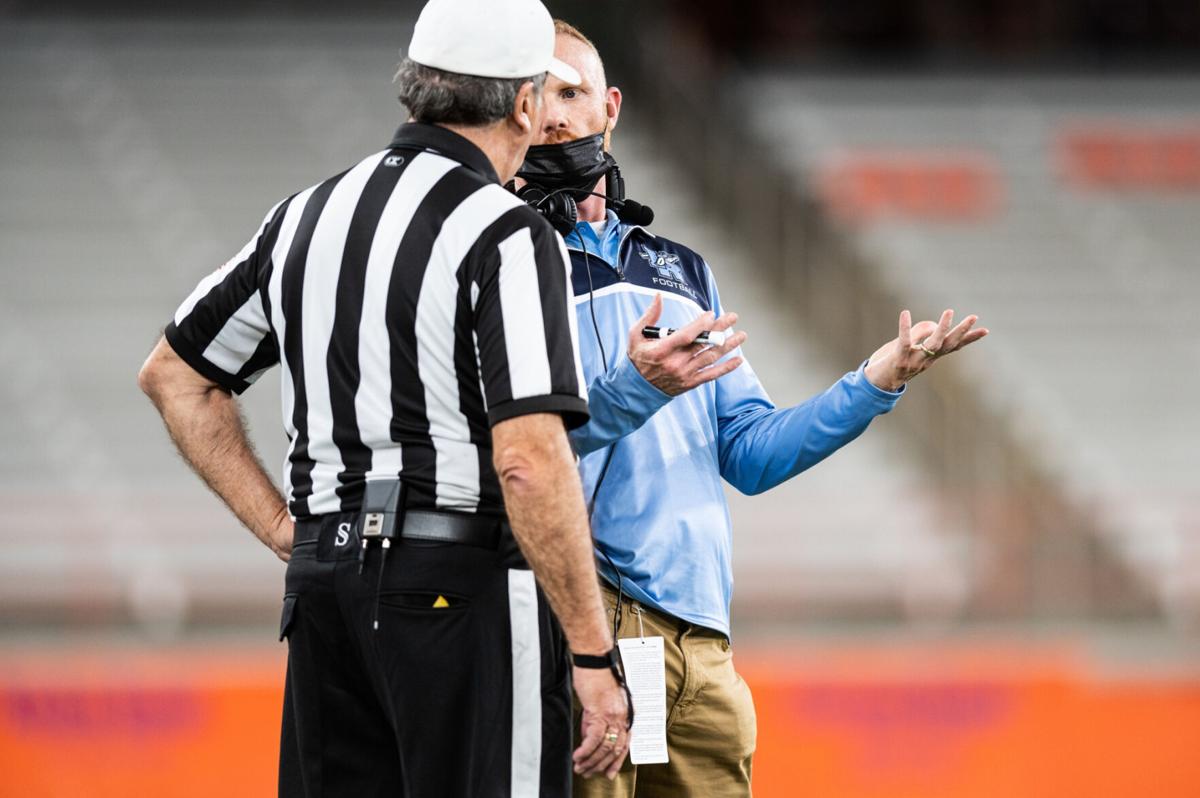 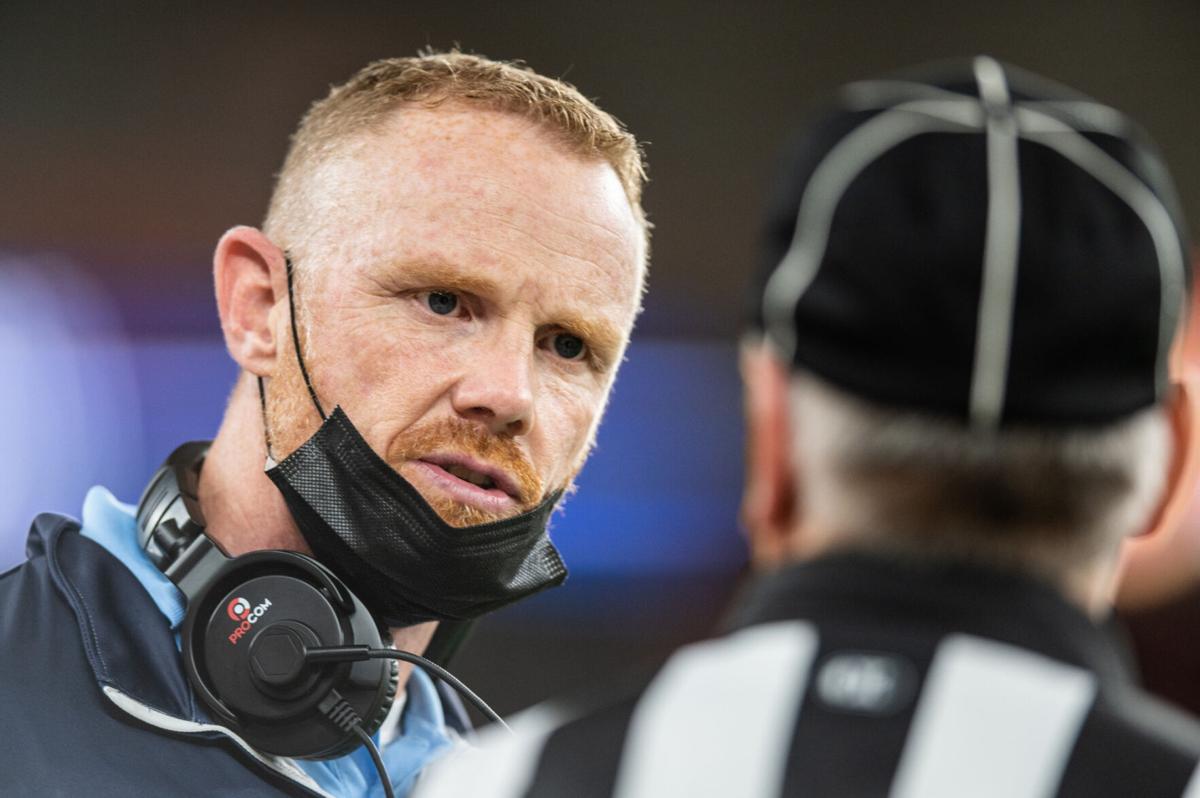 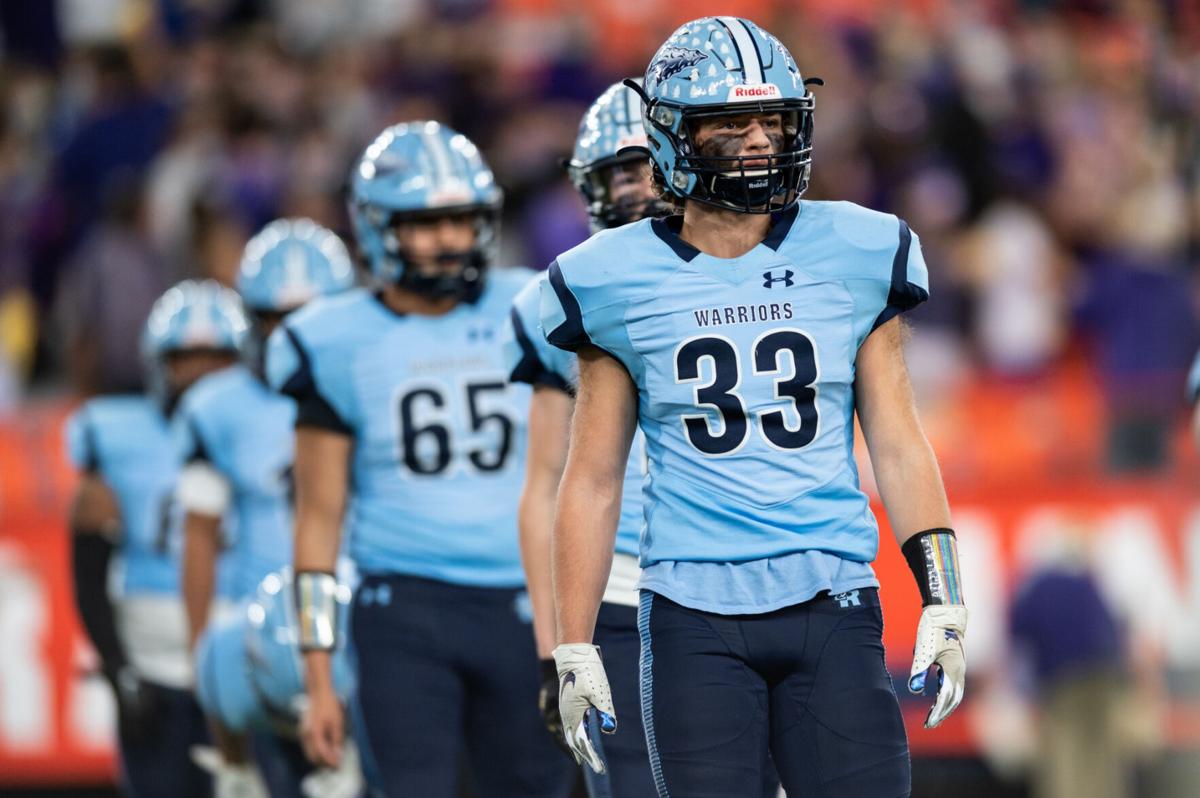 Indian River’s Connor McMahon (33) warms up with teammates prior to the team’s Section 3 Class A championship game against Christian Brothers Academy on Friday night at the Carrier Dome in Syracuse. Todd F. Michalek photo

Indian River head coach Cory Marsell calls out to his team during the Section 3 Class A championship game against Christian Brothers Academy on Friday night at the Carrier Dome. Todd F. Michalek photo

Indian River’s Connor McMahon (33) warms up with teammates prior to the team’s Section 3 Class A championship game against Christian Brothers Academy on Friday night at the Carrier Dome in Syracuse. Todd F. Michalek photo

Rae threw seven touchdown passes, including four in the first half, as the sixth-seeded Brothers shocked the top-seeded Warriors by combining physical play with a flair on offense in a 61-26 triumph in the Section 3 Class A championship game at the Carrier Dome.

Indian River, which had rolled to 51-30 victory over CBA in the meeting in the regular season, finished its season at 6-1.

This time around, the Warriors quickly found themselves in a unfamiliar territory, down by multiple scores as they trailed 18-0 in the first quarter.

“We just got beat by a better team today,” Marsell said of CBA. “They did a great job on both sides of the ball, we couldn’t stop them and we couldn’t move the ball.”

Rae and CBA (6-3) scored on their first four possessions in the first half — all on touchdown passes, including three to wideout Syair Torrence.

Uncharacteristically, Indian River went three-and-out on its first two possessions and struggled to find any rhythm on offense for much of the night – as it was shut out in the first half.

“Indian River is a very good program and their coach does a really nice job,” CBA coach Casey Brown said. “And that offense is very precise in terms of what they do. The point of attack puts a lot of angles and pressure and forces where the ball’s going to go. ... I think we did a great job defensively this time around.”

The Brothers struck first just eight plays into the game as Rae found a wide-open Torrence for a 13-yard scoring strike 3 minutes and 39 seconds in for a 6-0 lead.

After a short punt and four plays later, Rae found Torrence on a 9-yard scoring toss for a two-touchdown advantage.

Following another punt, Rae then hooked up with Amarri Pitts on an eight-yard scoring pass for an 18-0 lead with 42 seconds left in the first quarter.

“We knew they were loaded with athletes and those athletes came to play today,” Marsell said.

Indian River finally picked up two first downs early in the second quarter, but were again forced to punt.

Five plays later, Rae connected with Torrence again, this time on a 36-yard strike and after a conversion pass, led 26-0 with 5:22 left in the first half.

Indian River then drove to the CBA 31-yard line, but turned the ball over on downs in the final minute of the half.

The Warriors managed to generate only 67 yards from scrimmage in the first half.

“Physical,” Marsell added about CBA’s play. “They were actually probably more physical than us.”

The Brothers avenged a loss to the Warriors on Oct. 7, to kick off a month when CBA lost three straight games before engineering their current three-game surge.

“It was assignment football, so that’s what it was,” Brown said. “We treated Indian River with assignment football. The first time they got us, they beat us pretty well with that option. So we made sure we really, really got after it. It was just about doing your job.”

“When we beat them the first time, they must have struggled a little bit,” Marsell said. “Their coaches made some adjustments. We didn’t know what they were going to make for adjustments. But you know our kids, we just didn’t play our type of football for four quarters and they know that.”

The start to the second half wasn’t any better for the Warriors as on the opening possession, they attempted a fake punt, but Marsell was stopped by CBA’s Alex Smith two yards short of the first down on the Brothers’ 21-yard line.

Three plays later, Rae found a wide-open Jamier Handford for a 34-0 lead and following an Indian River punt, Rae connected with Handford again, this time on a 45-yard scoring pass down the left sideline to lead 42-0.

“They didn’t quit and they kept on going,” Marsell said. “It’s a football team and we knew that from the get-go. When you beat F-M (Fayetteville-Manlius) to get here you knew they were going to be good.”

The Warriors finally found the end zone to avert the shutout on Michael Davis’ six-yard scoring run with 3:04 left in the third to pull within 42-6.

But the Brothers quickly struck again on Gage Schortemeier’s 58-yard fumble return on the kickoff for a 48-6 advantage.

“The coaches did a great job preparing us, we changed our defenses,” Rae said. “We had new offensive schemes, it was awesome.”

The Warriors have now competed in a Section 3 final for the sixth time since 2014 when it won its first sectional title en route to winning the state championship in Class A.

“It really comes down to I’ve got to get them better prepared,” Cory Marsell added.