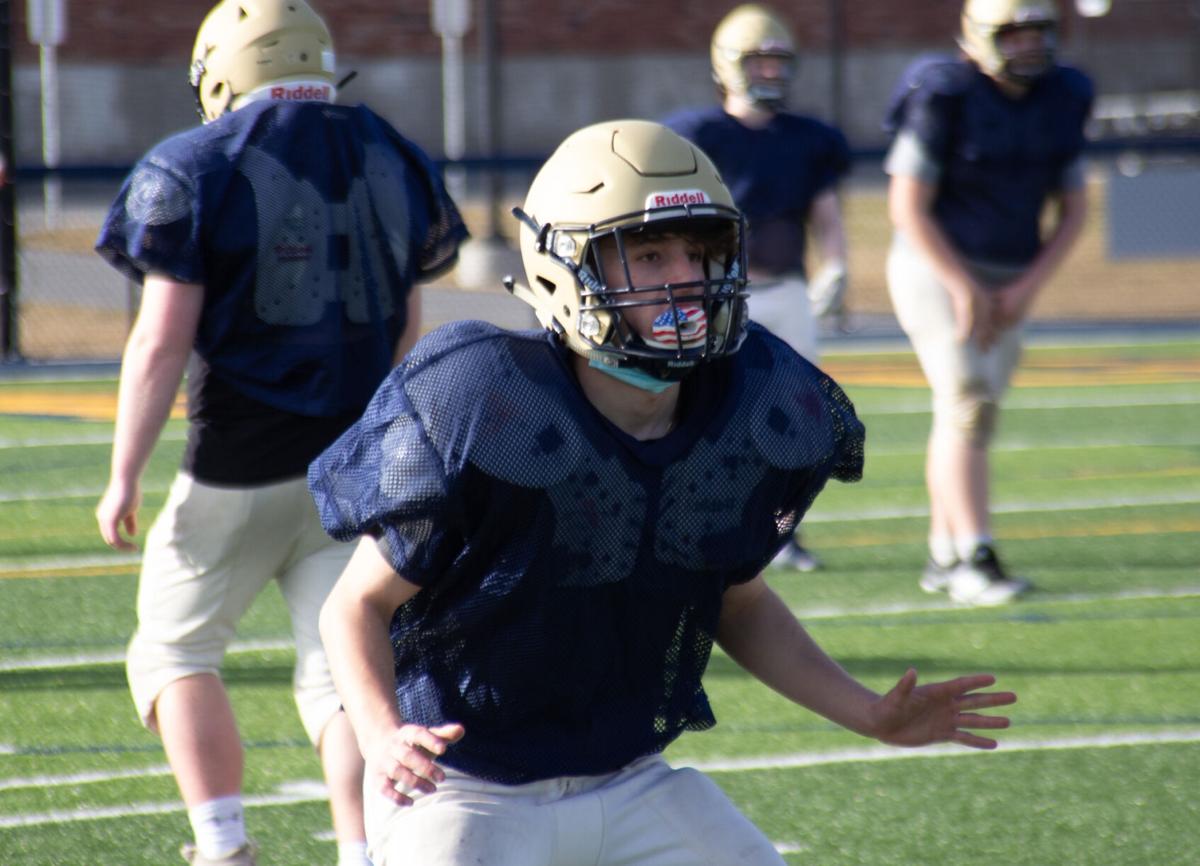 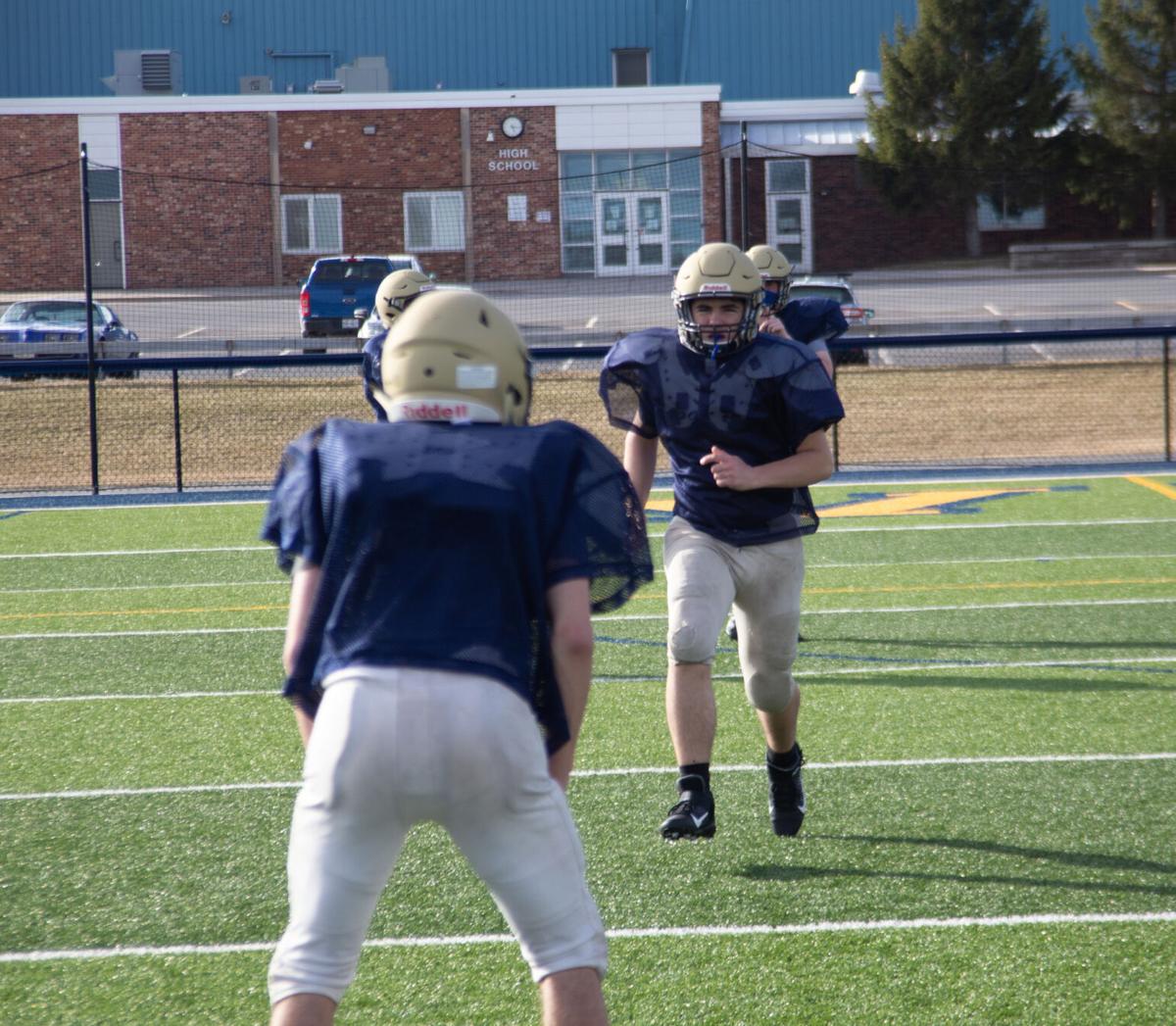 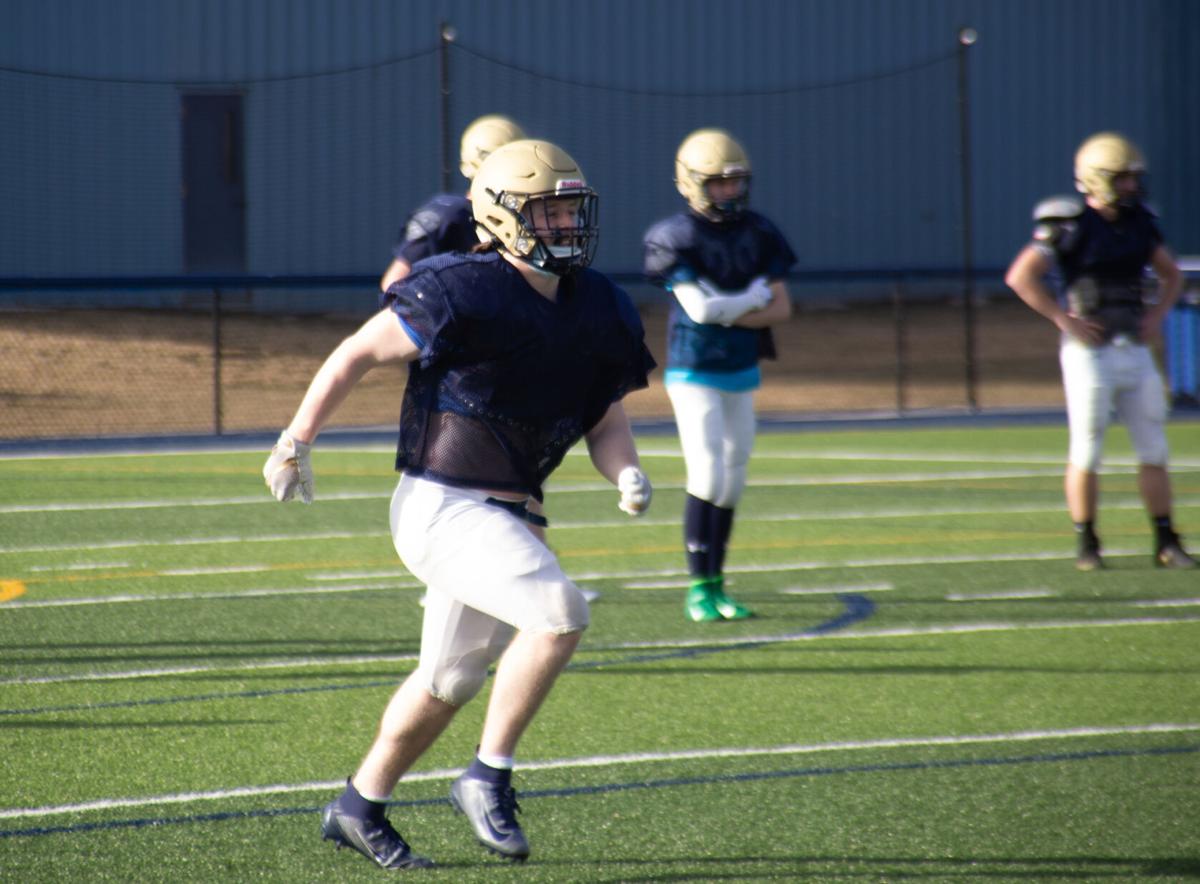 CLAYTON — Coach Ryan Kendall didn’t want his Thousand Islands football team to tackle each other just yet, that would come during Thursday’s practice. On Wednesday, he simply wanted them to get into the habit of wrapping up an oncoming player.

“In eight-man football, if you miss,” Kendall said to the team, his voice booming across the turf field, “Touchdown.”

With a little more than 20 players on the varsity roster, some of whom are green to the sport, the Vikings are competing in the 2021 spring football season as an eight-man team. With only three games scheduled — two against South Lewis and one against Bishop Grimes — Thousand Islands is treating this season as a trial run before it commits to playing eight-man football for a full season in the fall.

“For the past handful of years, we knew there was going to be a numbers issue coming pretty quick, the fact that we’re able to do a fall II is the perfect opportunity for us to do a little test,” Kendall said. “A little pilot program, to see how the coaches like it, how the kids like it, how the parents and the community like it.”

The seniors are pleased to have a football season, considering one wasn’t always guaranteed.

“Honestly, I’m grateful for it,” senior Emmet Baker said. “This is our senior year for some of us, and we just want to get out here. It’s really exciting.”

The fact that it’s an eight-man season doesn’t make a difference.

“I’m very OK with it,” senior center Nick Gokey said. “It’s nice to be able to play different teams and stuff. It just makes it more challenging and there’s more teamwork needed, which is good for us.”

While eight-man football is still football, the six fewer total players on the field for every play results in usually high-scoring affairs. The strategy of the game is ultimately different, and Kendall has been using much of his free time researching how to best coach in the new format.

For senior quarterback Connor MacKay, the eight-man game should translate into him using his legs more — and opportunity that intrigues him.

There’s something exciting about it, for Kendall, someone who’s been around the game for a long time. Transitioning to eight-man challenges conventional football thinking. However, he still hopes that the Vikings can return to 11-man at some point.

“It’s going to be tough, I played football and coached a lot of 11-man so it’s tough,” Kendall said. “I don’t want this to be a permanent solution, but we’re in a little bit of a gap right here where numbers are going to be an issue. If going to eight-man is what saves the program then that’s a no-brainer for me.”

Kendall has known this transition to eight-man was coming for a little while now. A few years ago, the Clayton Youth Commission dropped its Pop Warner program, and the Vikings have seen the last of the kids to play in that program graduate. The Clayton Youth Commission has since started a flag football league, but the lack of a real football feeder program has resulted in dangerously low numbers for the varsity program.

The Vikings could have technically competed in 11-man this season, but the coaching staff had legitimate safety concerns.

Committing to eight-man for the Fall II season, the only local school the Vikings will play is South Lewis. The Falcons will travel to Clayton twice — first April 1, then again April 13.

The Falcons are no stranger to eight-man football. Under coach Mike Absolom, they have been one of the more successful eight-man schools in Section 3 the past few seasons. This season they’ll average between 26 and 29 players per game.

In order to keep games local and cut down on transportation, South Lewis, in addition to playing Thousand Islands, will also play Beaver River. Beaver River, an 11-man school with plans of remaining 11-man, agreed to play the Falcons once this season in an eight-man competition.

“Beaver River reached out to me early on said that if we did this, they would love to play us in eight-man,” Absolom said. “I think they understand that it’s easier to go from 11-man to eight-man, and just pull a couple of players, then it is for a team that’s been eight man for three years now, going on four, to go to the 11-man game.”

While TI is hoping that a stint in eight-man is short-lived, Absolom views eight-man football as an ideal fit for the Falcons. This will be the program’s fourth year playing that format.

“This year people look at me and think, you really could do 11-man,” Absolom said. “This year is an anomaly. I think that knowing what we have in our eighth-grade class, they’ll be ninth graders next year, there’s only 45 kids in that class altogether. So, I just don’t see us being able to keep the consistent numbers to feel like 11-man will be appropriate for our district. ... I don’t want to personally jump from eight to 11 year after year, I think it’s good to stay in one category.”

A brief look at this year’s spring teams in Jefferson and Lewis counties:

Outlook: The Beavers were a game away from the Dome in the 2019 Class D sectionals. With nine seniors, including Sam Bush, Noah Zehr, Lincoln Becker and Connor Edick, the Beavers should be quite good again in Fall II season.

Outlook: Carthage saw many key pieces from its 2019 sectional championship team graduate at the end of last school year. The young squad’s big showdown will come on March 31 when it faces off against Indian River.

Outlook: The Class C Lions will get to play a few local crossovers this season, competing against Class A Carthage and Indian River. They will renew their rivalry with Lowville on April 16.

Outlook: Indian River will be junior heavy this season and feature 12 seniors on its roster. Garrett Decker and Jake Whitmore return to the team, both of them were All-North first-teamers last season.

Outlook: The Red Raiders have a few players returning from their 2019 Class C sectional title team. The most notable absence is quarterback Chad Bach, who graduated last June.

Outlook: Sandy Creek began its season Thursday against Oswego, the first north country team to kick off. The Comets will continue to play only Oswego-area schools this season.

Outlook: The Vikings are competing in eight-man this season with two games against South Lewis and a third against Bishop Grimes. Connor MacKay returns as running back, while Emmet Baker will take on primary halfback duties.