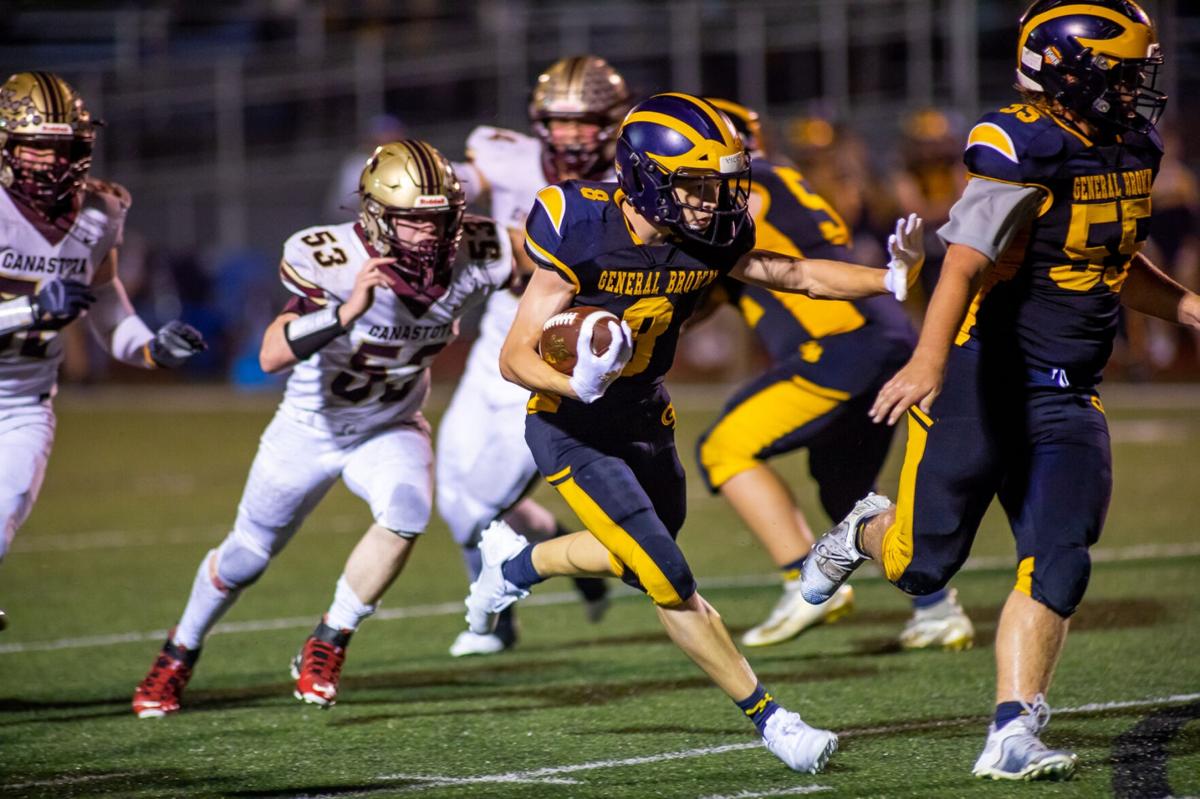 General Brown’s Gabe Malcolm is shown during the third quarter of a game against Canastota on Oct. 15 at General Brown High School in Dexter. Kara Dry/Watertown Daily Times 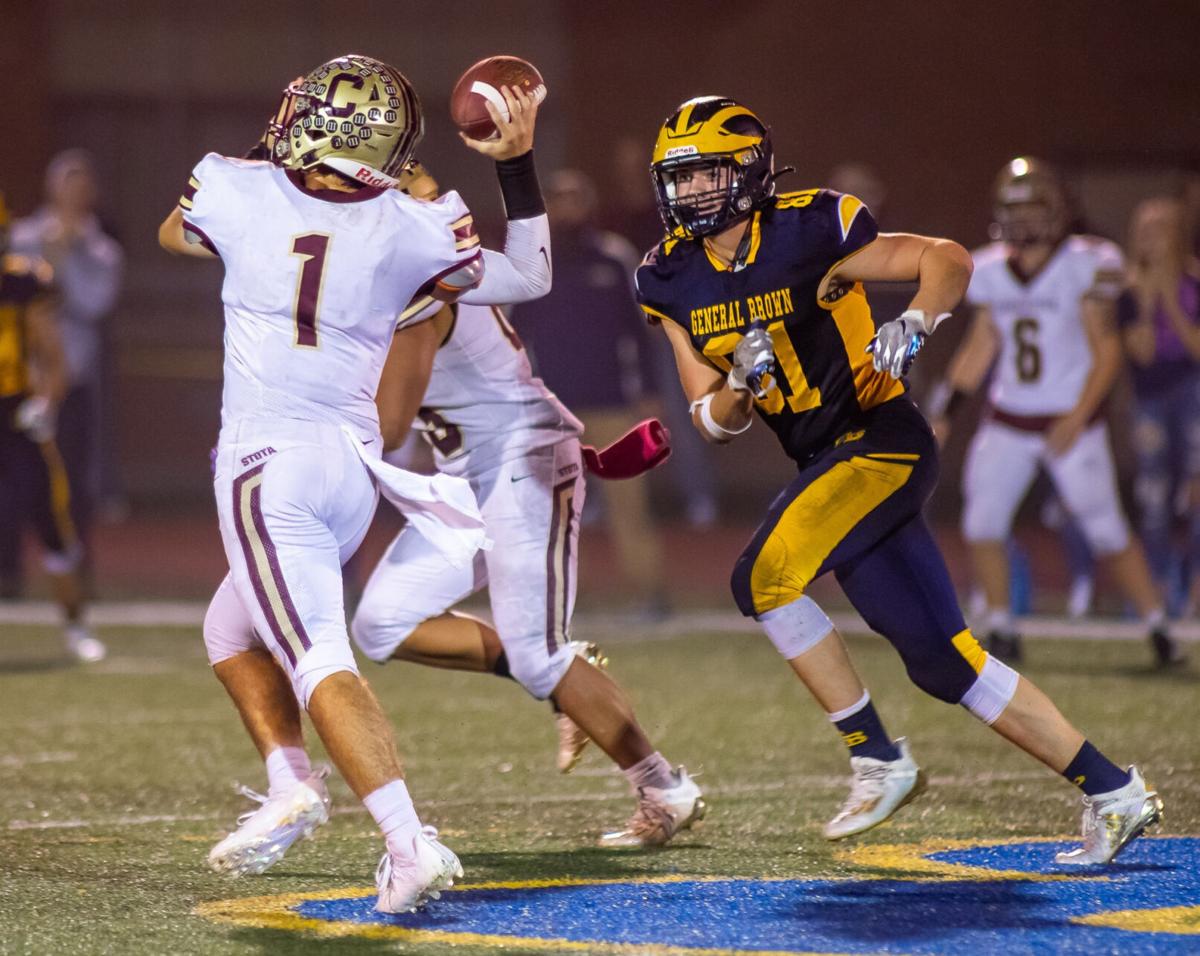 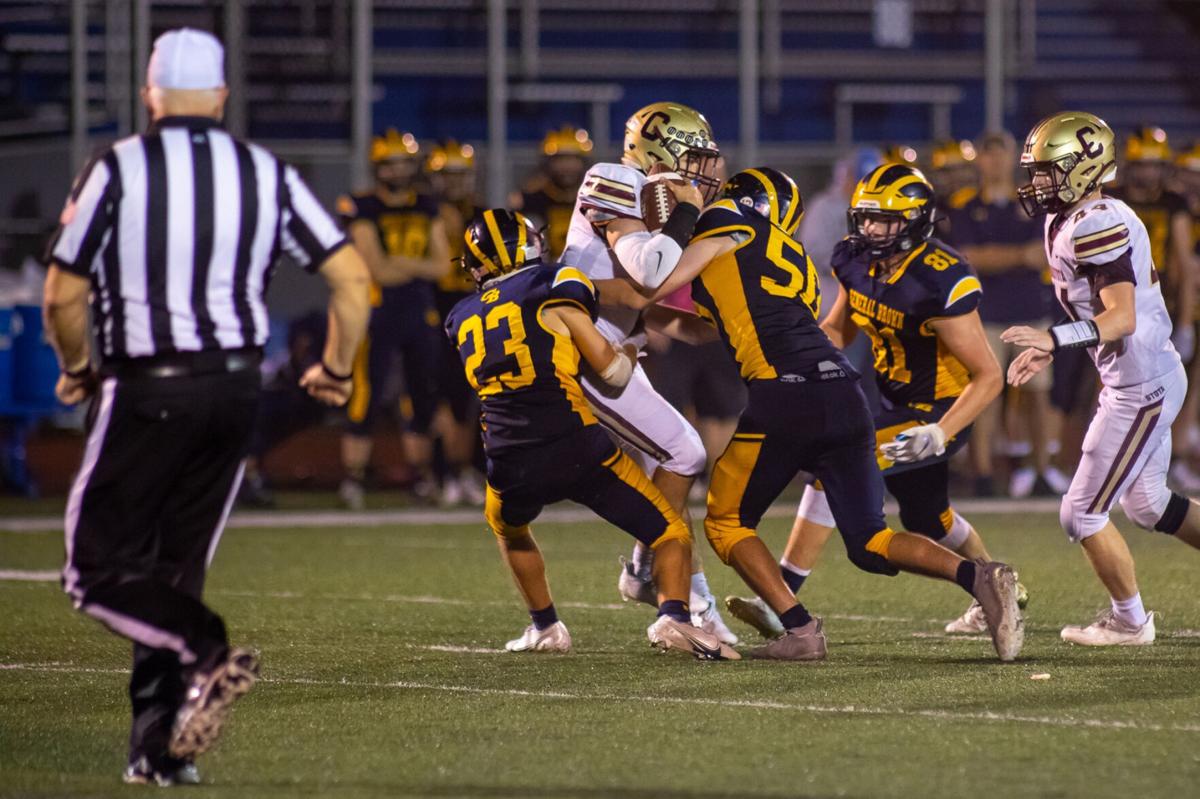 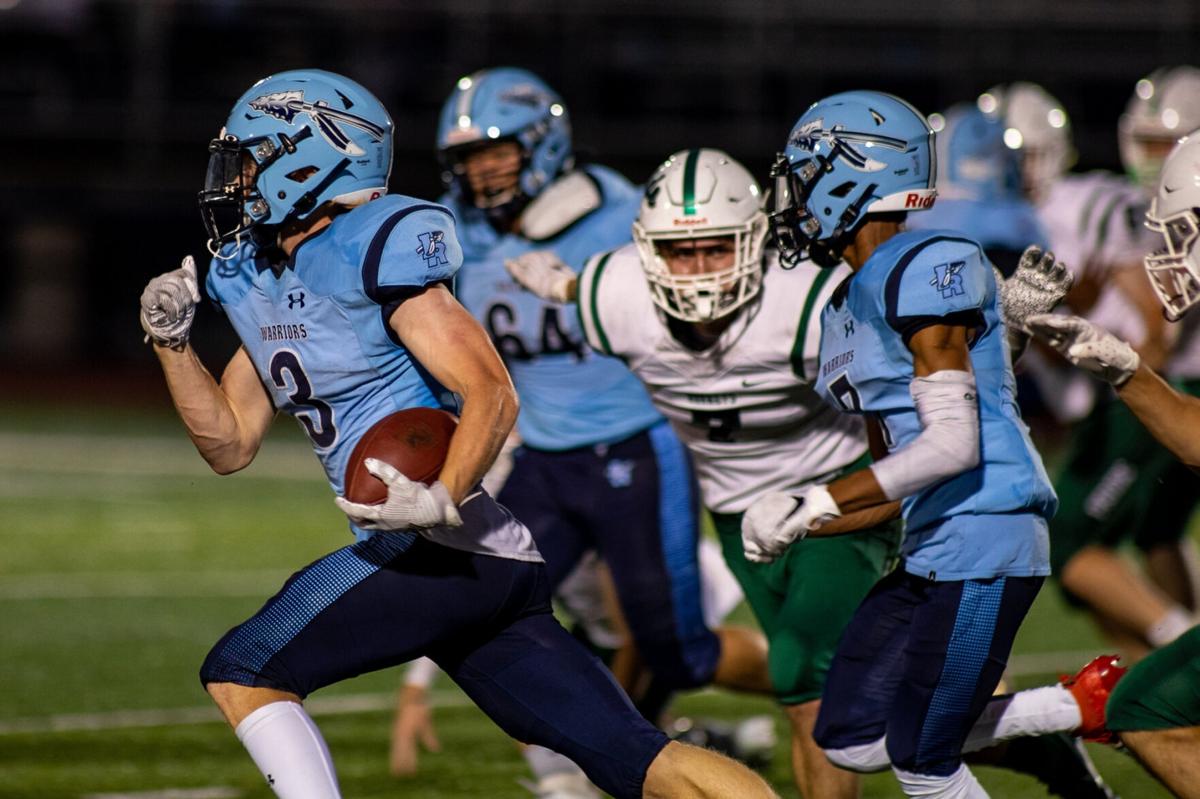 Indian River’s Rowan Marsell runs with the ball after an interception in a game against Fayetteville-Manlius on Sept. 17 in Philadelphia. Kara Dry/Watertown Daily Times 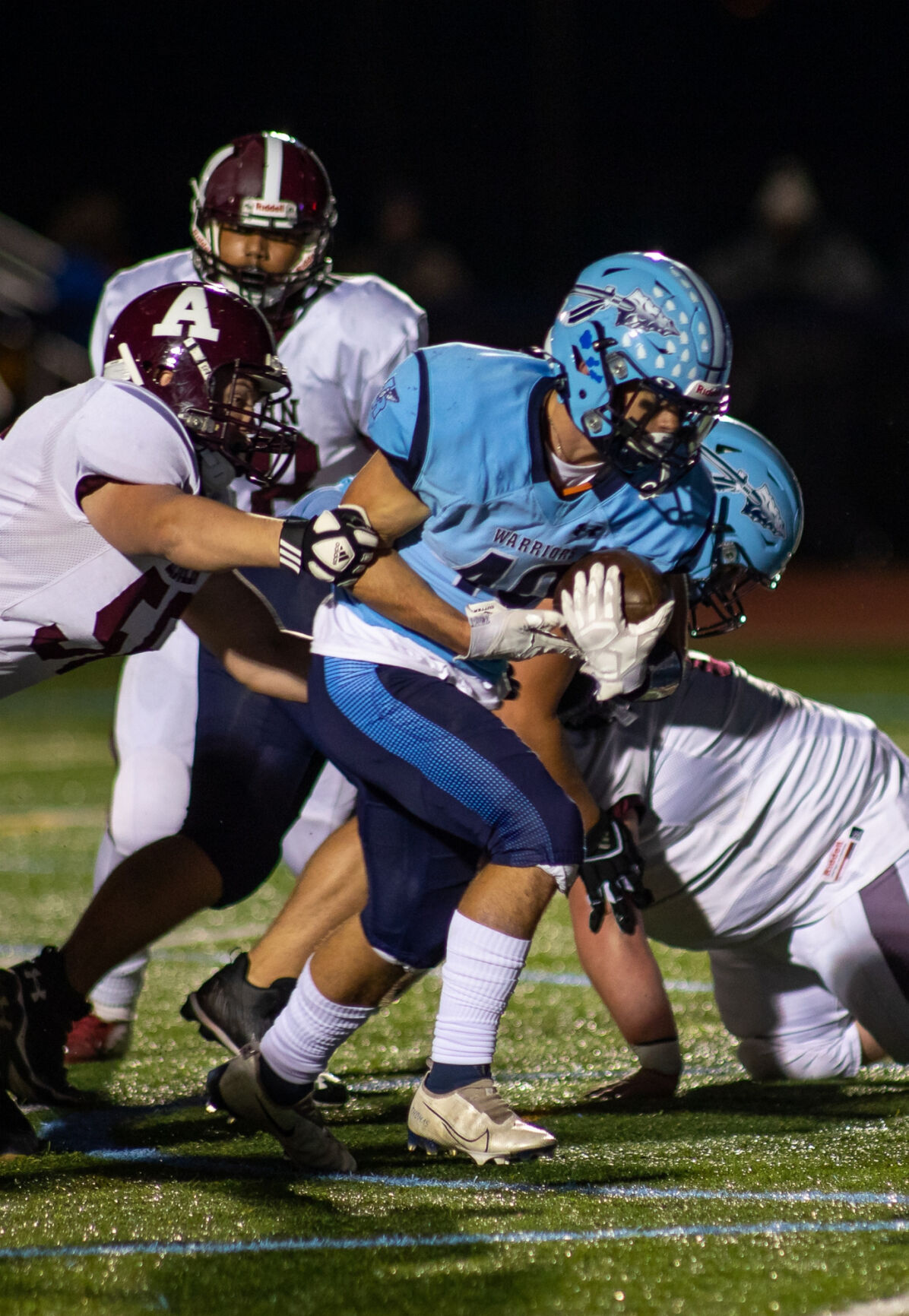 Indian River’s Gabe Lynch attempts to break through Auburn defense during the third quarter of a Section 3 Class A quarterfinal on Oct. 29 at Indian River High School in Philadelphia. Kara Dry/Watertown Daily Times 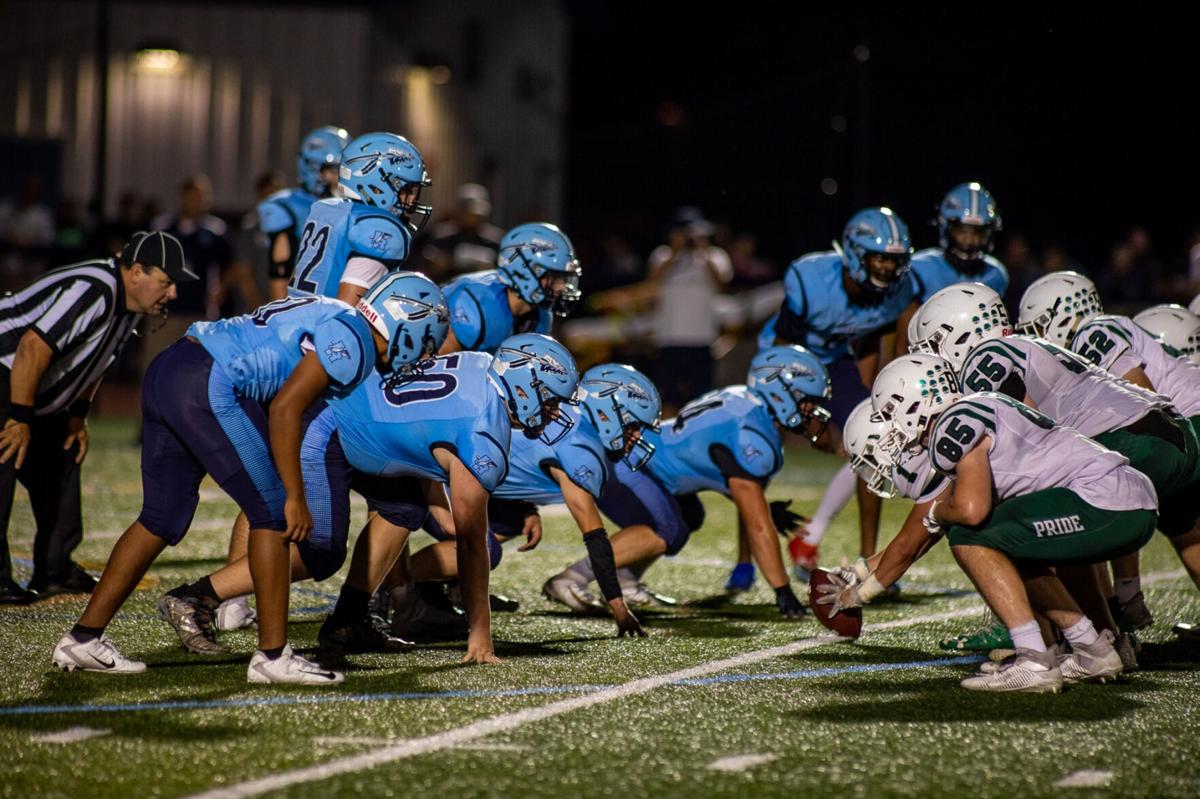 General Brown’s Gabe Malcolm is shown during the third quarter of a game against Canastota on Oct. 15 at General Brown High School in Dexter. Kara Dry/Watertown Daily Times

Indian River’s Rowan Marsell runs with the ball after an interception in a game against Fayetteville-Manlius on Sept. 17 in Philadelphia. Kara Dry/Watertown Daily Times

Indian River’s Gabe Lynch attempts to break through Auburn defense during the third quarter of a Section 3 Class A quarterfinal on Oct. 29 at Indian River High School in Philadelphia. Kara Dry/Watertown Daily Times

Historically, General Brown and Indian River have proven to be two of the most successful football programs in the area as well as in the state.

Both teams each recorded clutch defensive efforts in the sectional semifinal round last week, both perhaps the best of their respective seasons to date.

Now the Lions and Warriors, who are both unbeaten, will likely have to elevate their play on the defensive side of the ball even higher in each of their Section 3 championship games at the Carrier Dome.

Then second-seeded General Brown (9-0) will attempt to take down top-seeded Skaneateles (8-0), one of the top ranked teams in the state, in the Class C title game at noon Saturday.

“It’s going to be a battle, Skaneateles is No. 2 in the state,” General Brown coach Doug Black said.

Both the Lions and Warriors are returning to a Section 3 final in the Carrier Dome for the first time since 2018.

Indian River has made it to the championship round in six of the past eight seasons, minus the 2020 season that was canceled because of the pandemic.

“It’s always special to get to the Dome,” Black said. “It’s something we don’t take for granted because there’s a lot of hard work that goes into it. So we cherish every chance we get.”

General Brown senior quarterback Eli Rawleigh was one of three current players to play on that team.

“I played there in my eighth- and ninth-grade years,” Rawleigh said. “It’s a whole different experience, it’s crazy, and I’m so glad to be going back. Especially with this team, my senior year, it’s going to be nice being able to go back, and hopefully playing.”

Lions senior defensive tackle and tight end Derian Salter, who is also the team’s kicker, is one of the team’s leader on defense.

“Very exciting,” Salter said. “Two or three years ago I actually moved here from Canada and I watched General Brown play in the Dome and ever since then I wanted to come play for General Brown and do the same thing. And it’s an honor to do it in my senior year.”

After going unbeaten to win the Class C2 Division, General Brown defeated Southern Hills in the first round of the playoffs and then outlasted Bishop Ludden, 14-7, in a semifinal last Saturday at Cicero-North Syracuse.

“Our defense carried us last week,” Black said. “They shut down a pretty good offense last week with some great athletes, the kids did exactly what they were coached to do, played their assignments and they tackled very well.”

The Lions needed to make several defensive stands to hold off the Gaelic Knights, including one in the final minute in which a pass was batted down on fourth down.

“Our defense definitely played a great game,” Rawleigh said. “Our offense wasn’t really getting anything, I think they were just ready for us and I think without our defense playing as well as we did, I don’t think we win that game, honestly.”

General Brown has allowed 117 points — for an average of 13 a game — while scoring 288 points on offense.

“I think they’ve just steadily improved,” Black said of his team’s defense. “Each week we change things here and there and these kids have picked up on it well and they’ve just got stronger as the season’s gone on.”

Skaneateles, which won the Class C1 Division, defeated Cazenovia, 30-16, in a semifinal last Friday. The Lakers have scored 345 points this year while allowing only 88.

“We’ve seen film on them, they are extremely, extremely efficient,” Black said of Skaneateles. “They can run, they can throw, they run a spread offense and throw the ball all over the place, so they’re really going to test our secondary.”

“They’re one of those teams where if you get out of position and out of place, they’re going to take advantage of it and they’re going to get some long runs,” Black said. “So we’ve just got to make sure we play our game and play assignment football.”

Rawleigh paces the Lions’ offense, scoring 12 rushing touchdowns and running for 872 yards on 111 carries while passing for five scores.

“It’s definitely going to be a whole different experience hopefully being able to go out and lead the team at quarterback this year,” Rawleigh said.

Black added: “We’ve been dealing with some injuries, we had another kid break a leg Saturday, one of our starting linemen dislocated an elbow. Eli Rawleigh injured his ankle, he’s questionable for Saturday, so we’re kind of trying to keep things together.”

“It will be a good atmosphere, a fun game,” Orcesi said.

WARRIORS BACK IN TITLE GAME

Indian River won a state title in 2014 and last secured a sectional title in 2018, when it went on to reach the state semifinals.

Now a senior defensive lineman Jake Whitmore not only played, but started on that team as a freshman.

“It feels great because there are a lot of kids who didn’t get to experience that who are up with us now,” Whitmore said.

In a sectional semifinal at home last Friday night, the Warriors defeated West Genesee, 30-8, limiting the opposition to a touchdown.

“I think we played our best game against West Genny,” Marsell said. “They were a really, really good football team, very well coached. And I think our kids did a nice job responding and I hope we just continue to get a little bit better each week.”

“Being able to hold a powerful football team with some good players to eight points was great,” Marsell added. “It was our best defensive effort and I think our defensive backs were in the right spot, we were able to get some pressure on the quarterback without blitzing as much. So overall, it was a good experience.”

Indian River will face CBA that knocked off No. 2 seeded Fayetteville-Manlius, 22-12, in a semifinal last Friday.

“They’re a real dynamic team,” Marsell said of CBA. “They’re different then West Genny in the sense where they’ve got a lot of athletes on the field with speed trying to get those kids in open space. So we’ve got to make sure that we tackle like we did the other night and make sure that we’re in the proper zones in our drops. ... We want to keep pushing them so they don’t get the breakaways and the long runs.”

Though the Warriors recorded a 51-30 win in the previous meeting between the two teams Oct. 7, Marsell insists his team must be wary of the Brothers.

“No, you never want to give up 30 points,” Marsell said of the previous meeting. “Offensively, we did some really good things, if we can mirror that offensive effort and then be just a little bit better on the defensive side of the ball, I think we’ll be in good shape.”

Marsell has rushed for 1,185 yards and 15 touchdowns on 90 carries in six games and has thrown for other score.

Lynch has totaled 694 yards on the ground on 103 carries and has rushed for 10 touchdowns, while senior Michael Davis has 542 of his own rushing yards on 57 touches and four touchdowns.

“There’s still some things we need to iron out, but we’re doing pretty well,” Marsell said. “They’re executing at a pretty good level, there’s some things that need to be cleaned up and if we can take of that, then we’ll all be where we need to be.”

“This is what we play for, it’s about getting back to the Dome,” Rowan Marsell said last week.

Coach Marsell added: “It’s just something that not just myself, but a few of the other coaches that have kids envisioned at some point down the road and here we are. The unfortunate thing is it was taken away from some of those same kids that graduated last year, we think we had a similar opportunity to get there. But this year, it’s a special moment.”