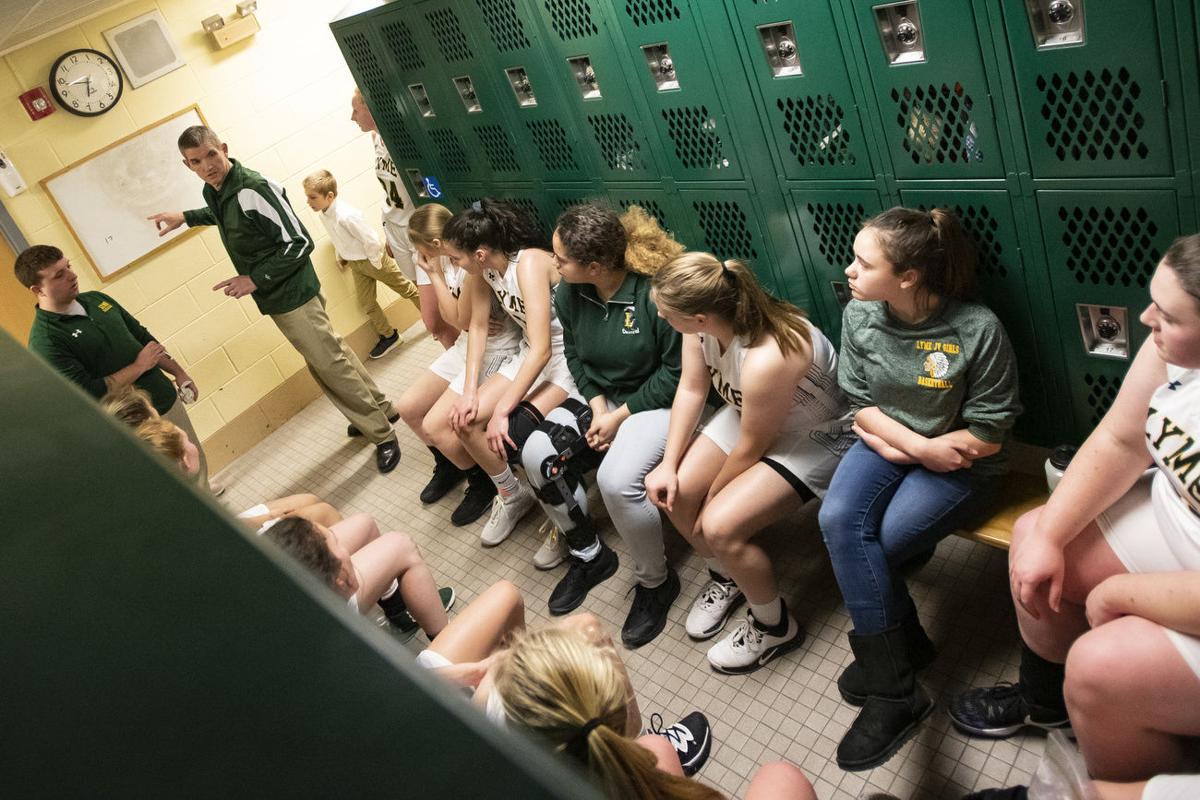 Lyme head coach Mark Wilson talks to his players in the locker room at halftime of the Section 3 Class D quarterfinal against Poland on Tuesday. Emil Lippe/Watertown Daily Times 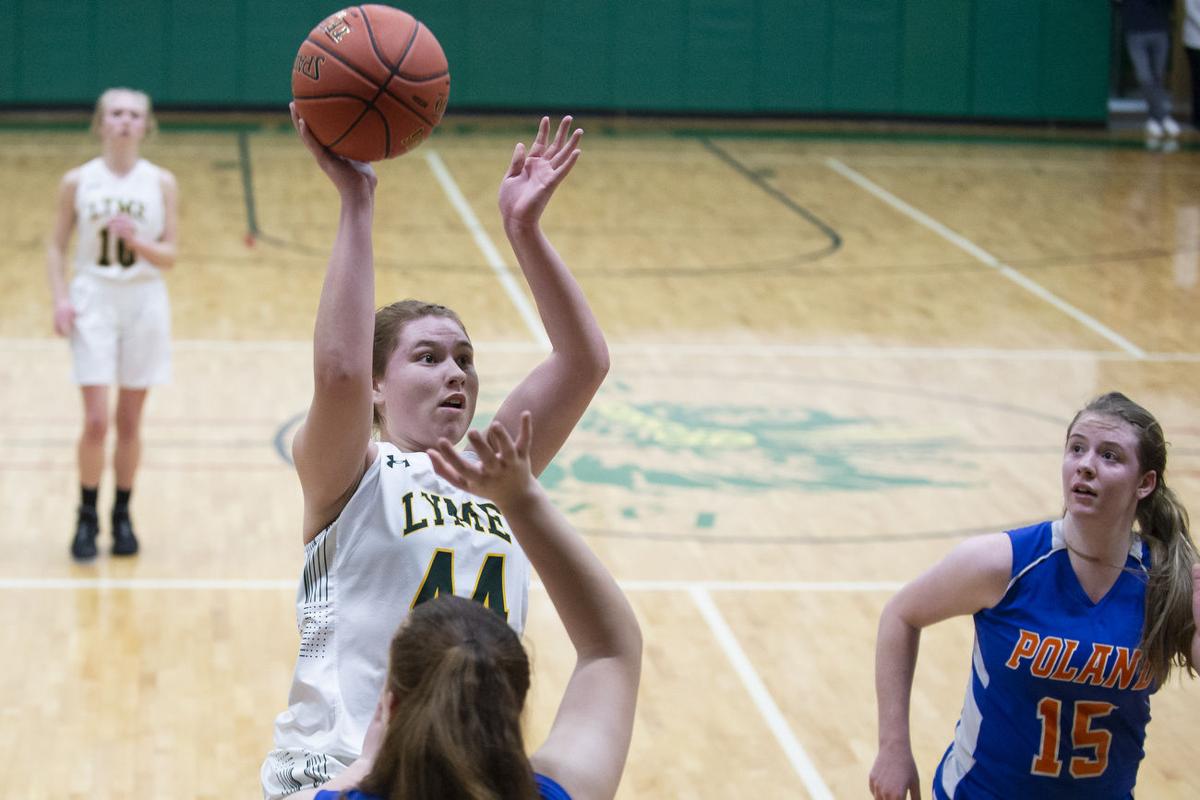 Lyme head coach Mark Wilson talks to his players in the locker room at halftime of the Section 3 Class D quarterfinal against Poland on Tuesday. Emil Lippe/Watertown Daily Times

CHAUMONT — Mark Wilson likes to refer to his Lyme girls basketball team as silent assassins. The girls in Chaumont are possibly the best girls team to wear the word “LYME” across the front of their jerseys. But Wilson isn’t trying to call much attention to it.

He prefers that opponents don’t see his squad coming.

At 11:30 a.m. today they’ll step inside Allyn Gym at Onondaga Community College to face No. 1 Brookfield. The 21-0 Beavers not only rank atop the section but are the No. 3 Class D school in the state.

Win or lose, the Lyme girls (17-4) have already made school history. They’re the first Lyme girls team to make it to the sectional semifinals since the girls program was run by Ken Towne in the mid-1980s.

The Indians are well-balanced. That’s the biggest difference from the 2013-14 team that made it to the sectional quarterfinals and earned Lyme its first sectional win in 30 years. That squad rode the tremendous talent of Yanna and Enesa Ososkalo to a 13-6 record.

Wilson’s squad this year is much more balanced. Point guard Olivia Ososkalo is leading the scoring with 15 points per game, but forward Francesca Wilson is right behind her, putting up about 13.2 points per game. It doesn’t stop there, Simarra Willett and Natalia Ososkalo are always good for a shot or a steal with Riley Aubertine often in position to grab a big rebound or put back a missed jumper or lay-up.

The scoring options are plentiful and the attendance in Lyme’s gym for the sectional quarterfinal last Tuesday suggests that the community is picking up on the girls’ excellence.

Anyone close to the school could tell you that wasn’t always the case.

For the majority of the 1990s and 2000s, Lyme was dreadful. Between 1990 and 2000, the Lyme girls basketball program had 11 head coaches, five of whom coached only for a single season.

“The fact that the team wasn’t very good and there was a carousel of coaches fed into the kids’ mentality,” Mark Wilson said. “They would have a coach for one season, they wouldn’t do very well, that coach would take off, then a new coach would come in, that kind of got into their heads, too.”

Wilson, currently in his second stint as head coach, is in his ninth consecutive year at the helm of the girls team.

When he started in 2011, his vision was long-term.

“When I was able to get my foot back in the door, I had a meeting with the parents and the players and said, ‘This is my goal, this is my vision, this is what I want to do,’” Wilson said. “‘But we have to start in the summer and basketball has to become a year-round sport. I know that during the summer, parents like to go on vacation, people have things to do, but if you can make 90 percent or 80 percent of the stuff we do in the summer, that’s better than the nothing we’re doing right now.’”

“I think Mark brought a lot to the table with his knowledge of basketball and he’s very good with the girls,” Davis said. “He’s a graduate of Lyme and he played for a lot of those teams that did well. He cares for this school.”

Following the success of the 2013-14 squad and the graduation of both Yanna and Enesa Ososkalo. Lyme experienced a drop off. The Indians finished 0-18 and 1-17 in back-to-back seasons, prompting Wilson to bring up the current crop of players when they were eighth graders.

The move drew some heat, the team had won just one game in two years, but Wilson knew that the varsity experience those eighth graders got would pay off in the future.

He also knew that the team could succeed with support from the parents.

“As far as I’m concerned, we have the best parents and the support system for our program here,” Wilson said. “Our parents buy in, if I tell them I want to do something, they buy in. They’re always there and they always back it.”

The community is buying in as well. Wilson has often had people come up to him before or after games to express their support. He’s had people tell him, “‘You know what, watching the girls is just as exciting as watching the boys now.’”

The Indians are still young, only Riley Aubertine and Francesca Wilson will be graduating at the end of the season, so there will be plenty of more opportunities for success.

The Lyme girls used to have a reputation of being among the worst teams in the league, but today they’re anything but. They’re the No. 4 seed and they’re a win away from playing for a championship.