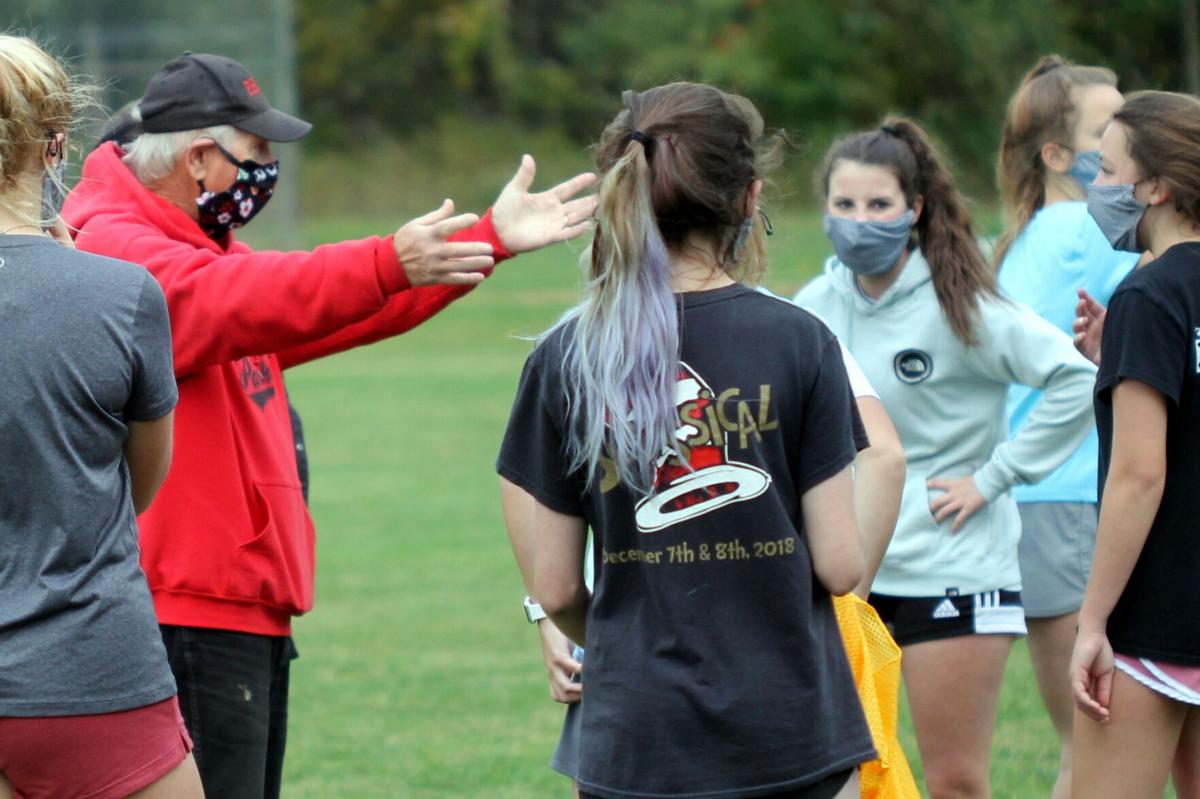 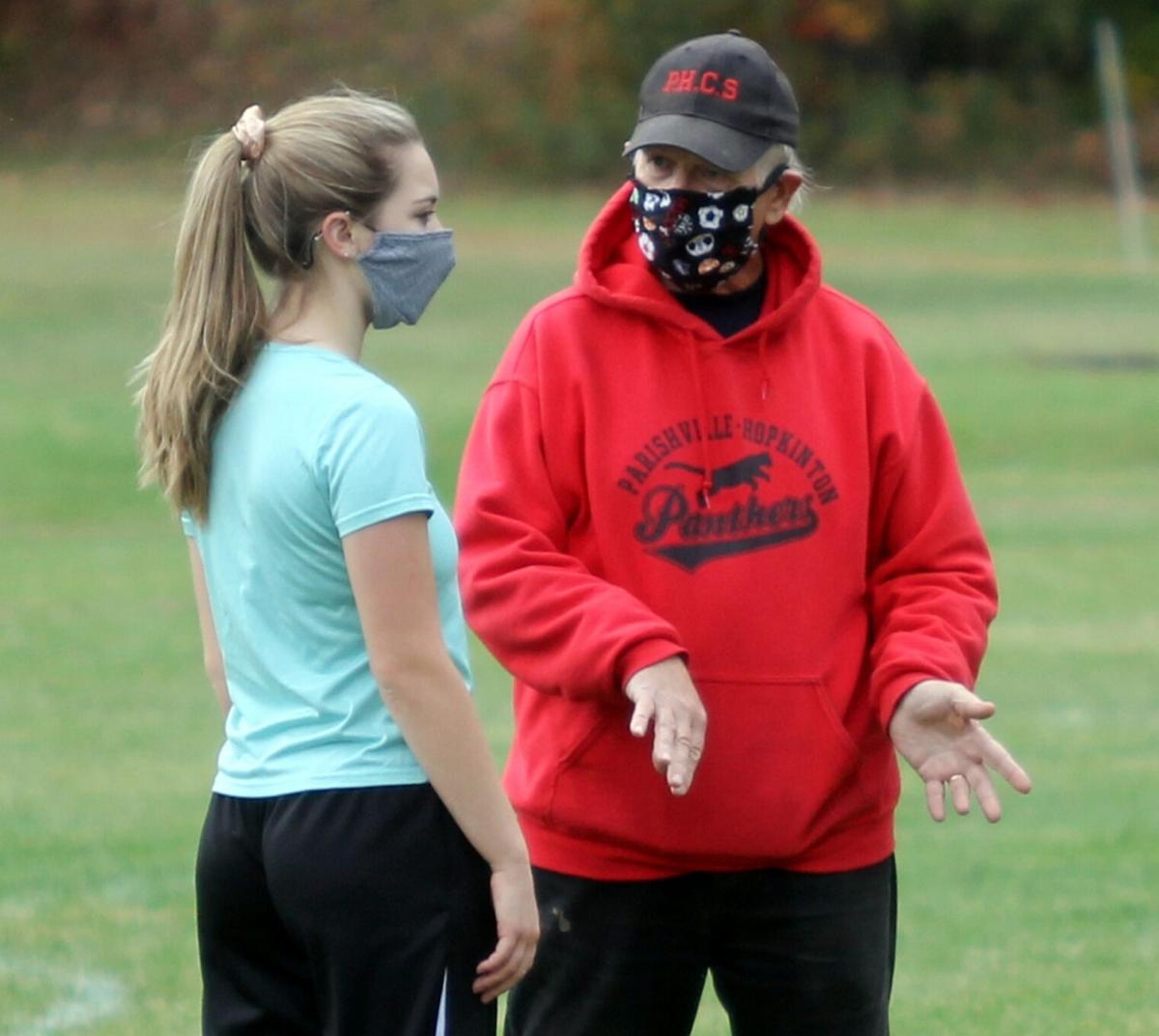 Parishville-Hopkinton’s Evan Harper is beginning his 41st season as head coach for the Panthers. He began coaching at Edwards Central in 1967. Alain St. Pierre/Courier Observer 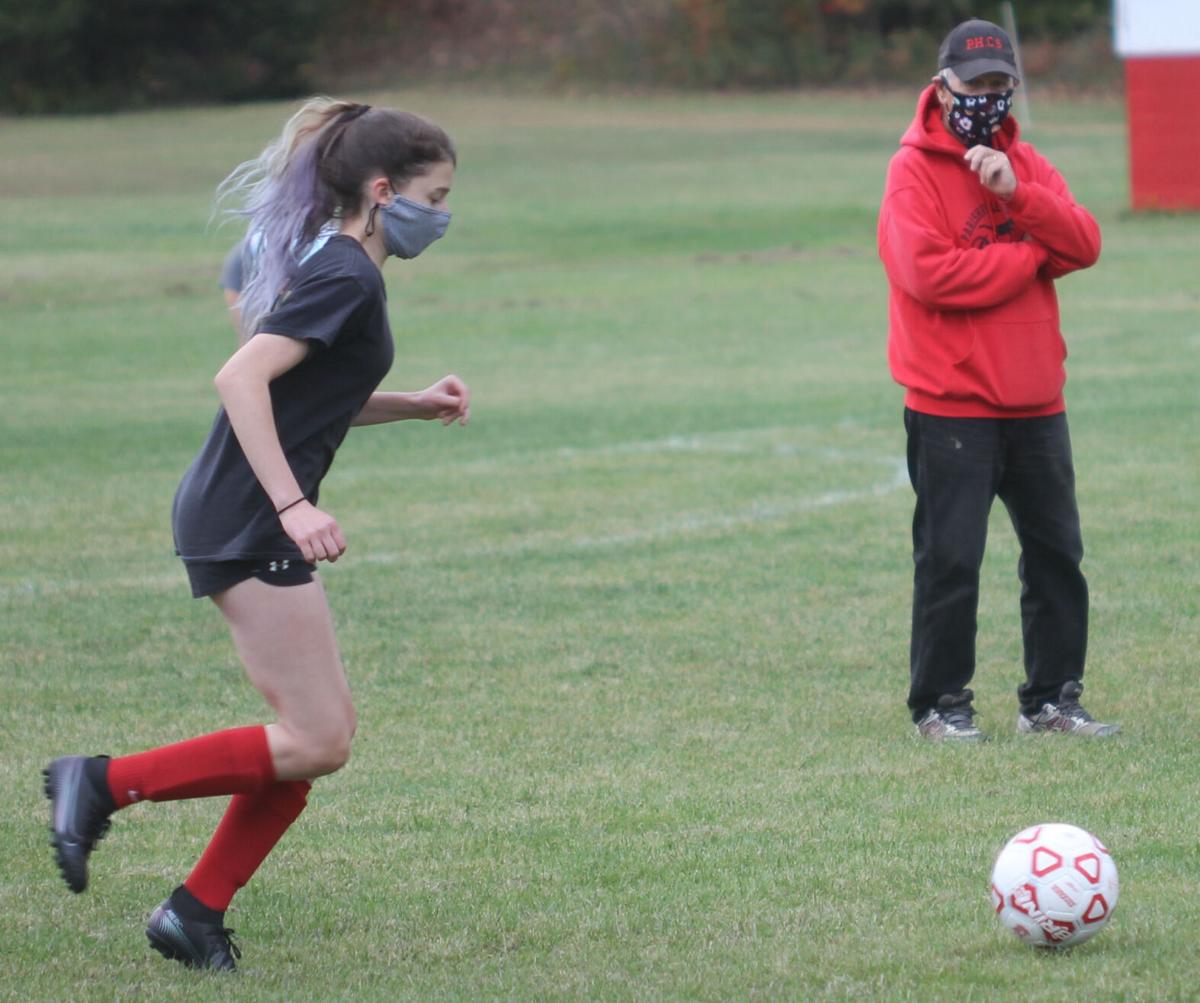 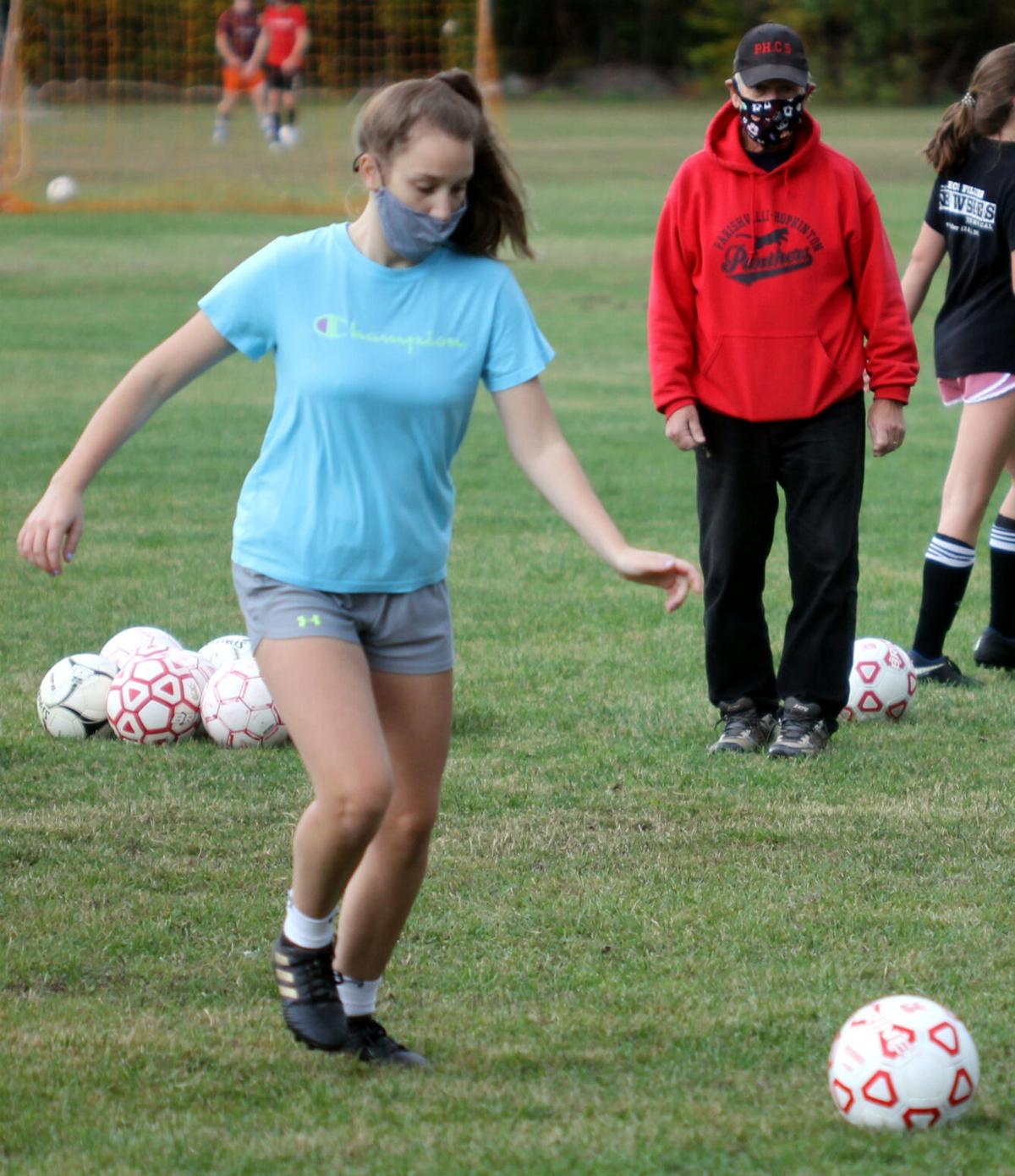 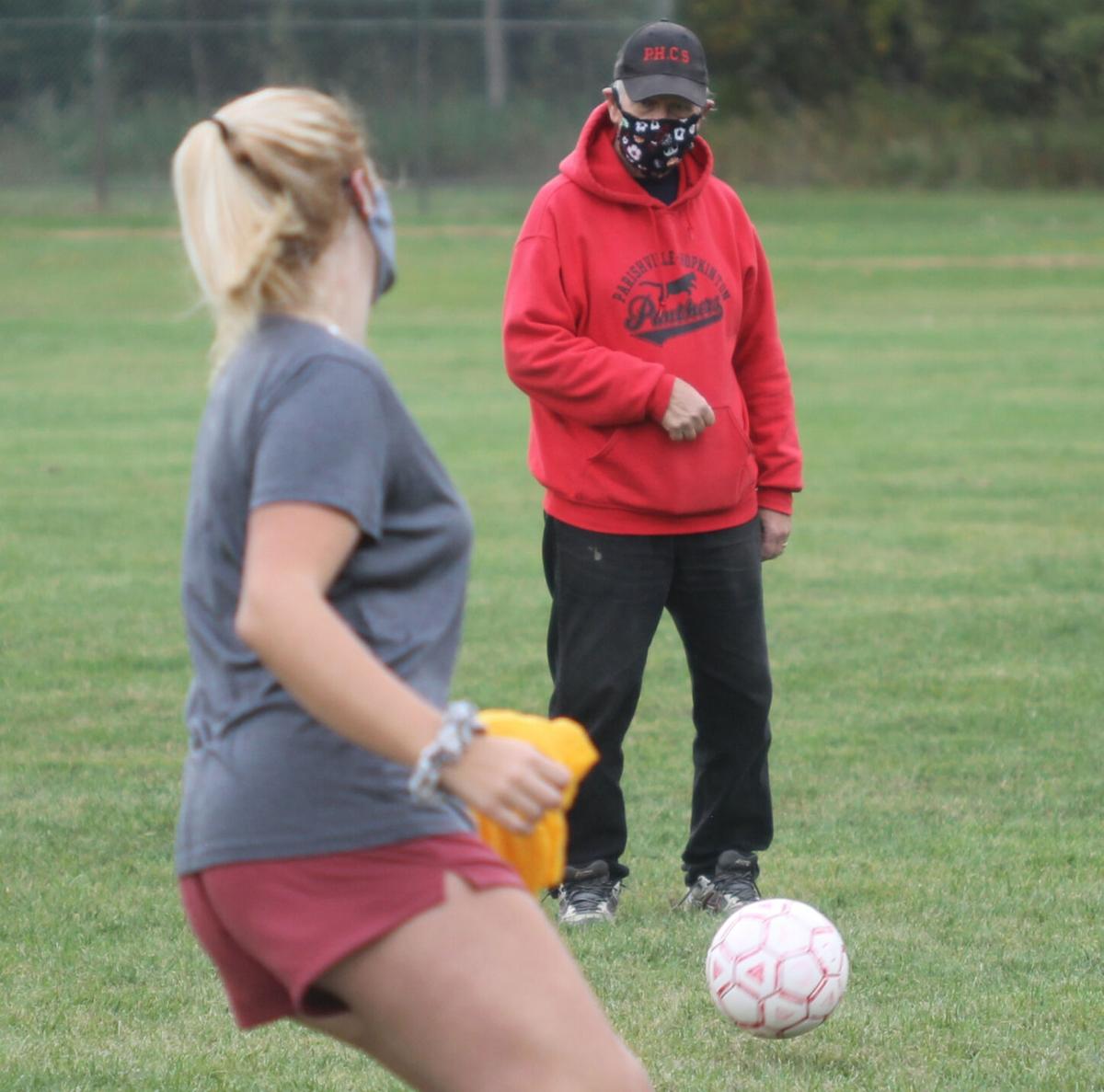 Parishville-Hopkinton’s Evan Harper is beginning his 41st season as head coach for the Panthers. He began coaching at Edwards Central in 1967. Alain St. Pierre/Courier Observer

“When I was growing up, we didn’t have electricity but we would listen to (Brooklyn) Dodgers games on the radio and I remember making my mind up that I was either going to be a professional baseball player or a physical education teacher. The baseball career never panned out so I went the phys-ed route,” said Harper, who graduated from Parishville-Hopkinton in 1963 and began his varsity coaching career at Edwards Central four years later after graduating from Cortland State.

“Back then, it was kind of taken for granted that if you taught phys-ed, you were also going to do some coaching and that’s pretty much what got me started,” he added.

Since that first job as a gym teacher in 1967, Harper has coached for more than 50 years and has led the Parishville-Hopkinton varsity girls soccer team since 1980. He helped lead the Panthers to two state semifinal appearances and sits 17 victories away from 500 for his coaching career.

“I’d have to say that finishing (in the state semifinals) those two years would be the highlight of my career,” Harper said. “Getting to 500 wins is a secondary goal at this point. My primary goal is to get the best out of the players every fall.”

A three-sport standout at PHCS through the early 1960s, Harper was a two-time league all-star for the eight-man football and the varsity baseball teams while playing varsity basketball for three seasons. After earning his college degree, he was soon hired at Edwards in 1967 where he also served as head coach for varsity boys soccer and boys basketball for the next three years.

“We had eight-man football in the fall at Parishville(-Hopkinton) so I never played any soccer,” said Harper, who had a winning record in both sports through his three-year stint. “I bought quite a few books about soccer and started going to soccer clinics. Some of the other coaches, like Tim Hennessy at Colton-Pierrepont, were pretty helpful, too.”

Harper returned to his high school alma mater for the start of the 1970-71 school year where he resumed his career as physical education teacher and took over the head coaching reins for the varsity eight-man football, basketball and baseball programs. Two years later, the football program gave way to soccer as the fall sport for boys at Parishville-Hopkinton and Harper transitioned his coaching skills from the one back to the other for the start of the 1972 season. Girls soccer was introduced a year later at the school.

After managing just one win in their first season away from the gridiron, the Panthers started what has been a winning tradition on the soccer field the following year when they qualified for playoffs.

Harper continued to coach all three varsity sports at PHCS through the end of the 1970s, eventually giving way in boys soccer to Jerry Aiken, who served as an assistant at the varsity level and ran the junior varsity squad. He then took over as varsity girls soccer coach before the start of the 1980 season from Ann Harmon, who worked alongside Harper as phys-ed instructor. Harper eventually stepped aside as basketball coach following the 1981-82 season and retired from teaching in 2000 but continued coaching softball until five years ago.

“I was also athletic director at the time and we were having problems finding coaches for the girls sports. We needed a new head coach for girls soccer and I gave Jerry (Aiken) the choice. He wound up choosing boys soccer and I picked up girls soccer,” said Harper, who had given up his post as baseball coach in favor of becoming the first head coach of the varsity girls softball program the previous spring.

“Our girls soccer teams were OK when I took over. I knew we had a good group of student-athletes coming up through and I pushed them a little bit more,” he said.

By the end of the 1980s, girls soccer at Parishville-Hopkinton was not only one of the top programs in Section 10 but also ranked as one of the elite Class D teams in New York State, finishing as tournament runner-ups in 1988 and 1989 then reaching the state semifinals the next season. Despite having made another half dozen trips to the state tournament over the following three decades, it wasn’t until the fall of 2018 that the Panthers earned their way back to the semifinals.

“I’d coached boys teams and I think one reason why we have been so consistent over the years with our girls teams is that they’ve been willing to work just as hard,” Harper said. “We’ve always gotten great cooperation from the players and they have a great work ethic.”

Harper enters his 41st season with 483 wins as coach of the Panthers. Harper’s name doesn’t appear on the New York State Public High School Athletic Association’s list of all-time leaders in coaching wins for girls soccer. But his total is the fifth most when matched with the names on that list. Due to the 2020 season already being shortened by concerns over the spread of coronavirus, Harper will now have to wait at least one more year before having a realistic chance at reaching 500 wins. Only two coaches have reached 500 wins according to the NYSPHAA.

“The ultimate goal every year is to make it to states. It is disappointing that they’re not having sectionals or regionals but it is understandable with COVID going on,” he said. “I think we’ll be decent this year though. Last year, we only scored one goal in our first five games but the kids kept pushing themselves in practice and we moved some players around to other positions and we wound up winning eight of our last 10 games.”

Canton (9-2-3), Gouverneur (9-4-1) and Massena (8-4-2) were the next contenders a year ago and each returns one player who made the Times All-North teams a year ago. Canton brings back senior Hannah Reed. Gouverneur returns senior Laney Smith and Massena brings back junior Elizabeth Rogers.

St. Lawrence Central, which went 0-12-2 in the Central Division last year will return to the East this year. Brushton-Moira (11-2-1) and Chateaugay (10-2-2) were the top teams in the East last season. The Bulldogs bring back senior standout Chloe Champagne. Parishville-Hopkinton (9-5) was also in the championship mix a year ago.

Norwood-Norfolk, which went 7-5-2 in the East a year ago, has moved to the West Division this season. Hammond was the dominant team last year, posting a 12-0 record and eventually reaching the state Class D final four. The Red Devils bring back stellar forward Avery Kenyon, who totaled 33 goals and 25 assists last year, along with Norah Peace and Zoey Cunningham. Edwards-Knox (7-4-1) was the only other West team to produce a winning record a year ago. Morristown returns All-North player Rylie Showers.