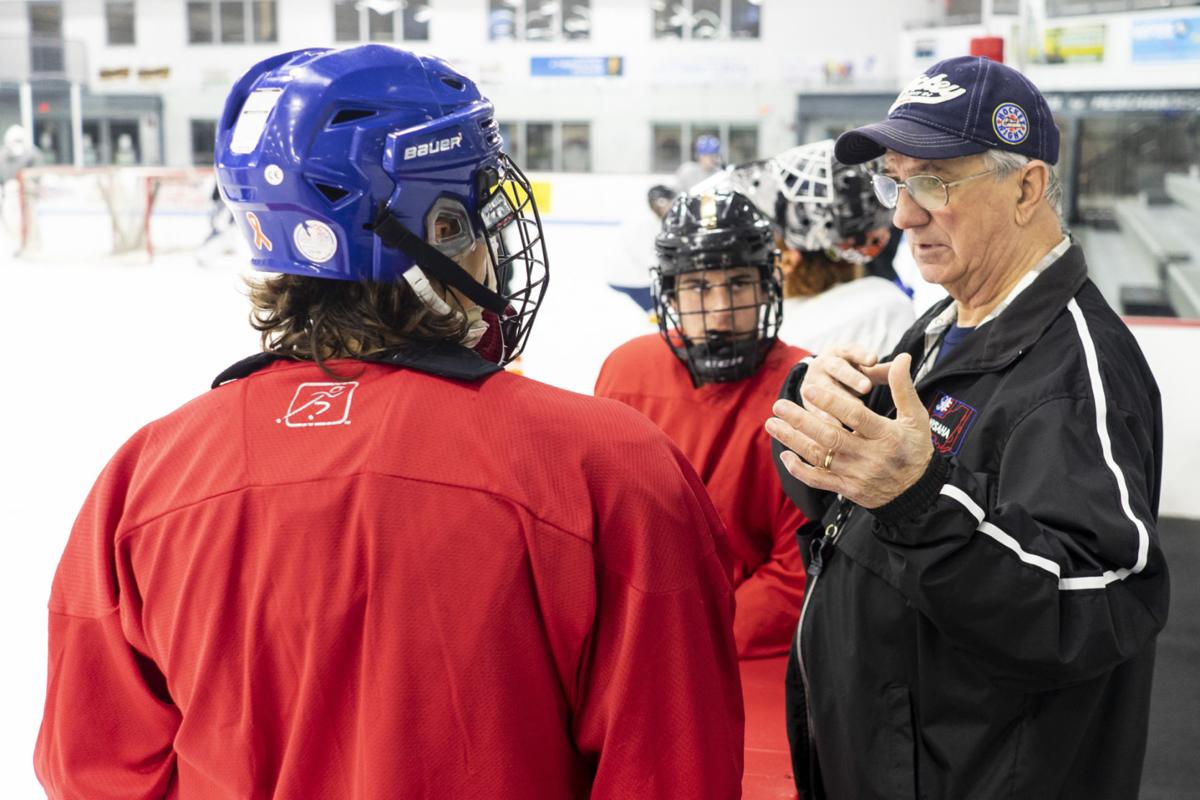 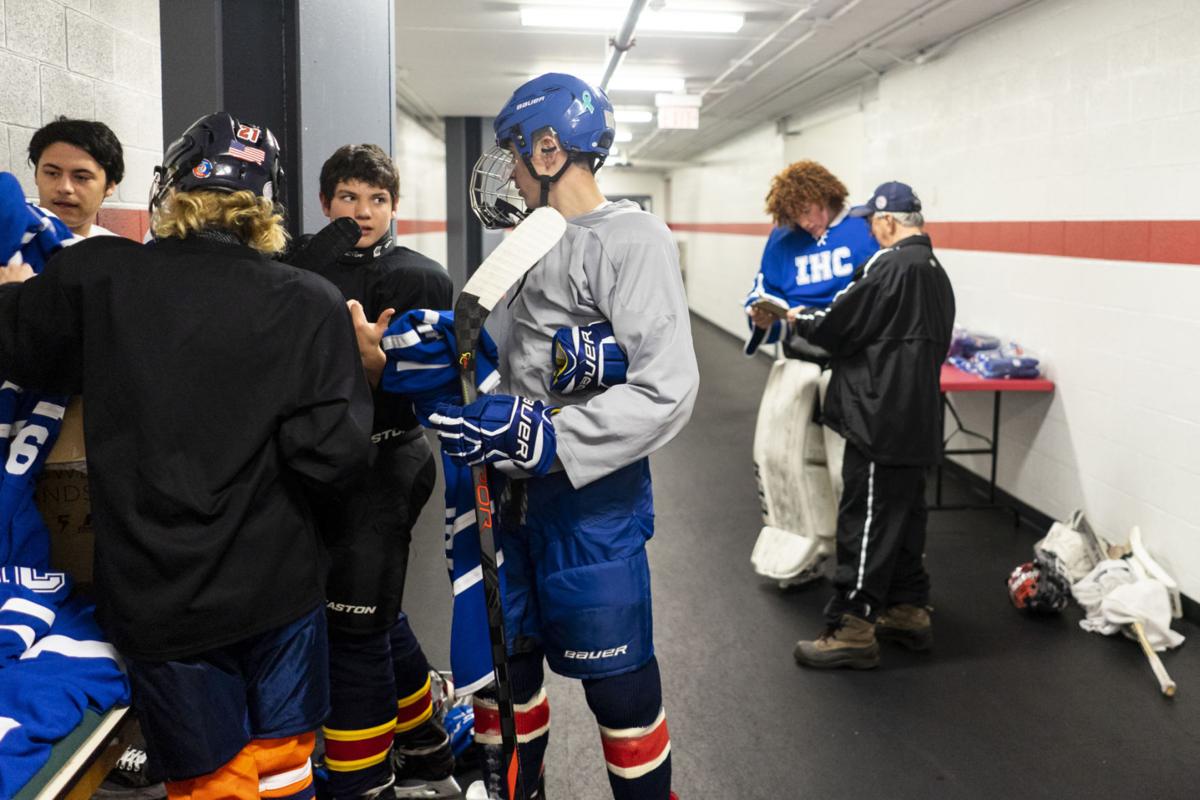 Head coach James O’Brien talks with an IHC goaltender after the team picks jerseys for the season at practice on Wednesday in Watertown. Julia Hopkins/Watertown Daily Times 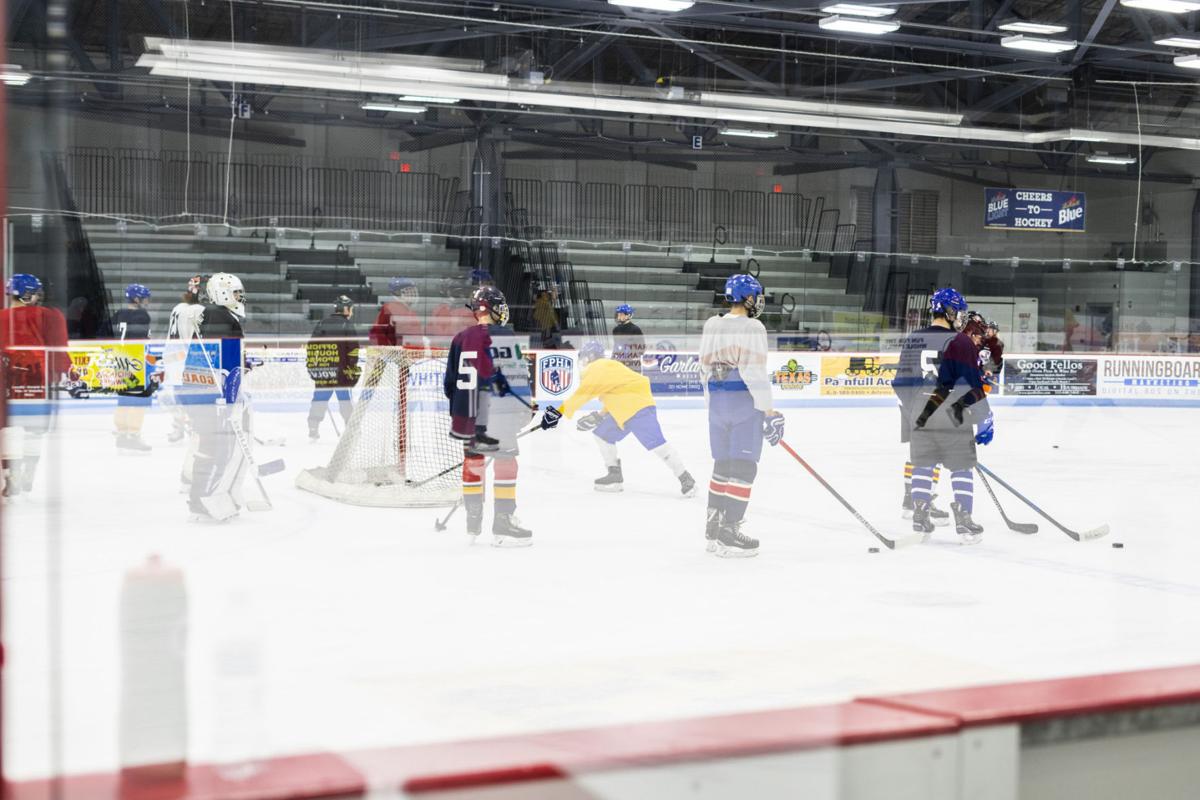 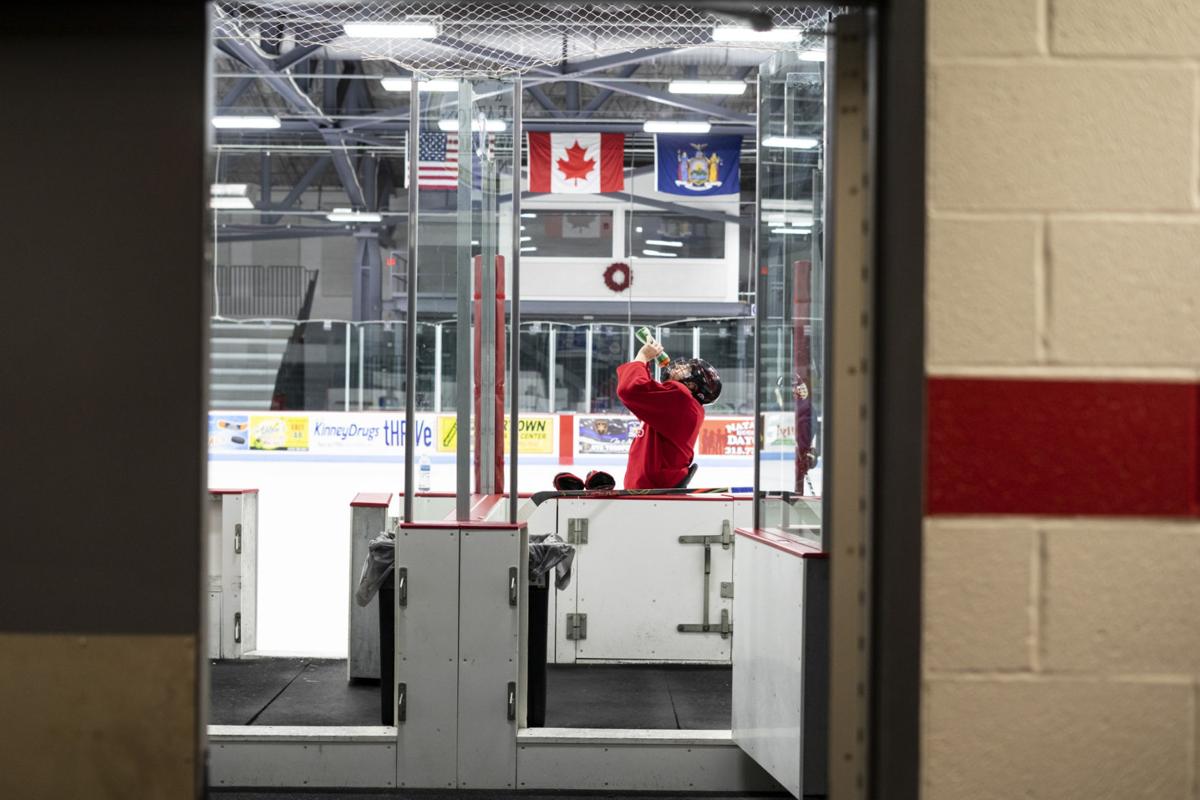 An IHC hockey player takes a break between drills at practice on Wednesday in Watertown. Julia Hopkins/Watertown Daily Times 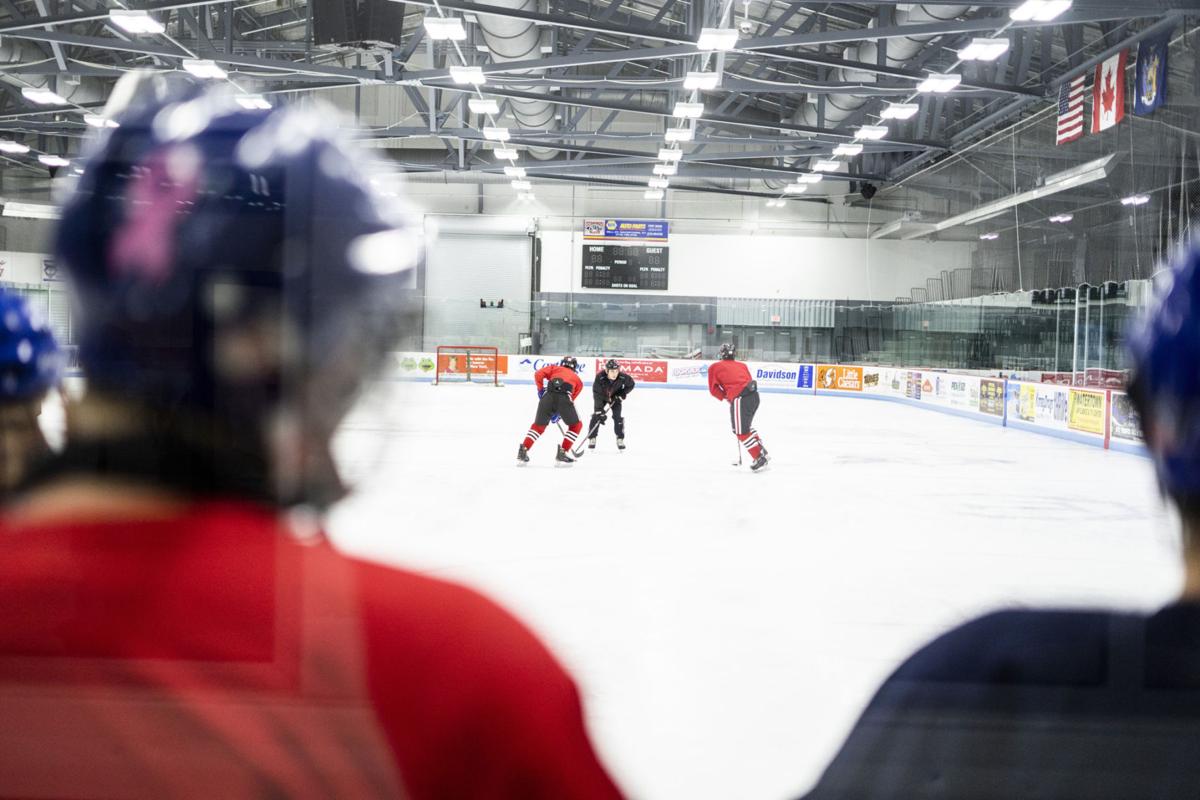 A member of the IHC coaching staff directs players during practice on Wednesday in Watertown. Julia Hopkins/Watertown Daily Times 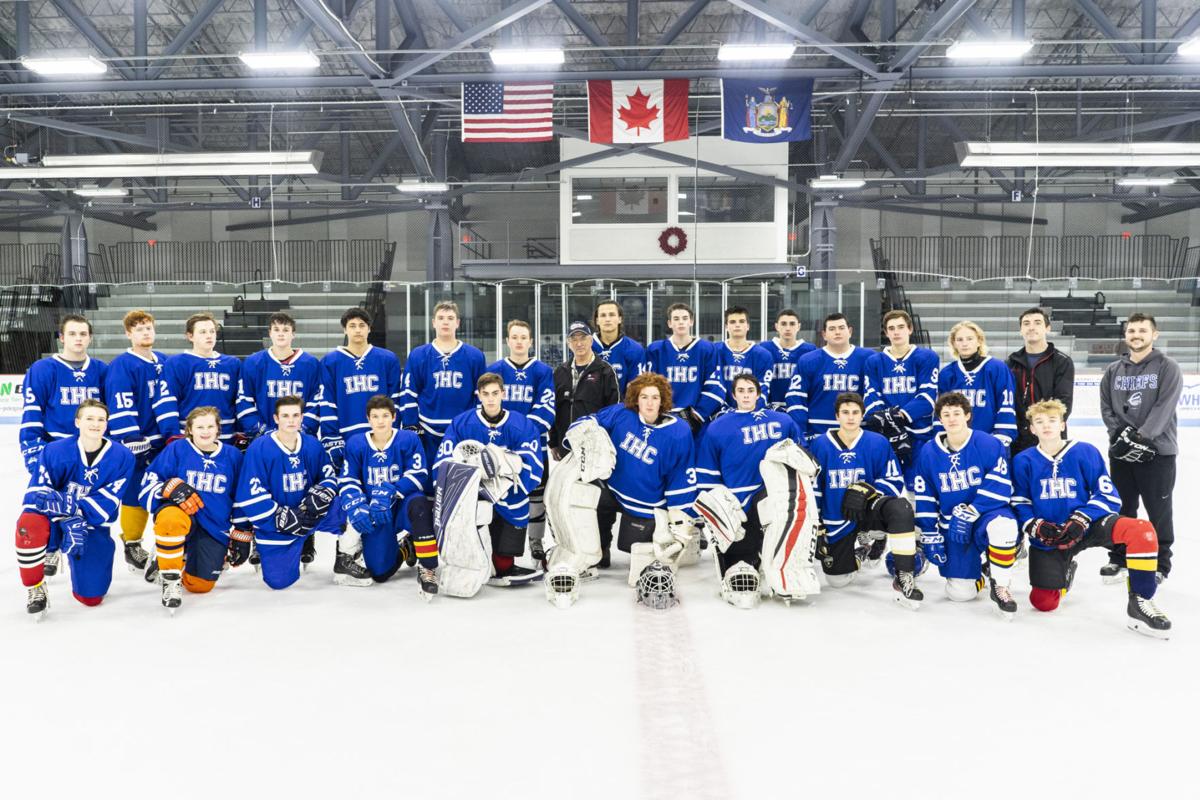 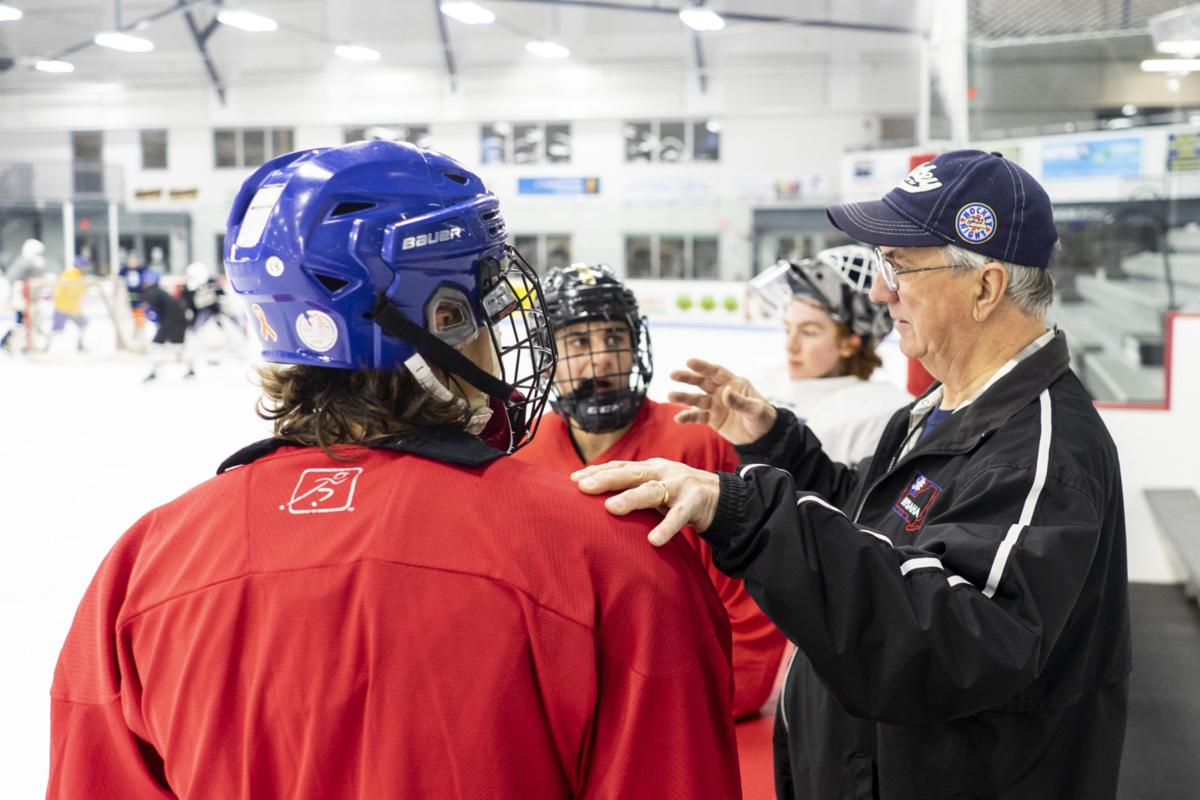 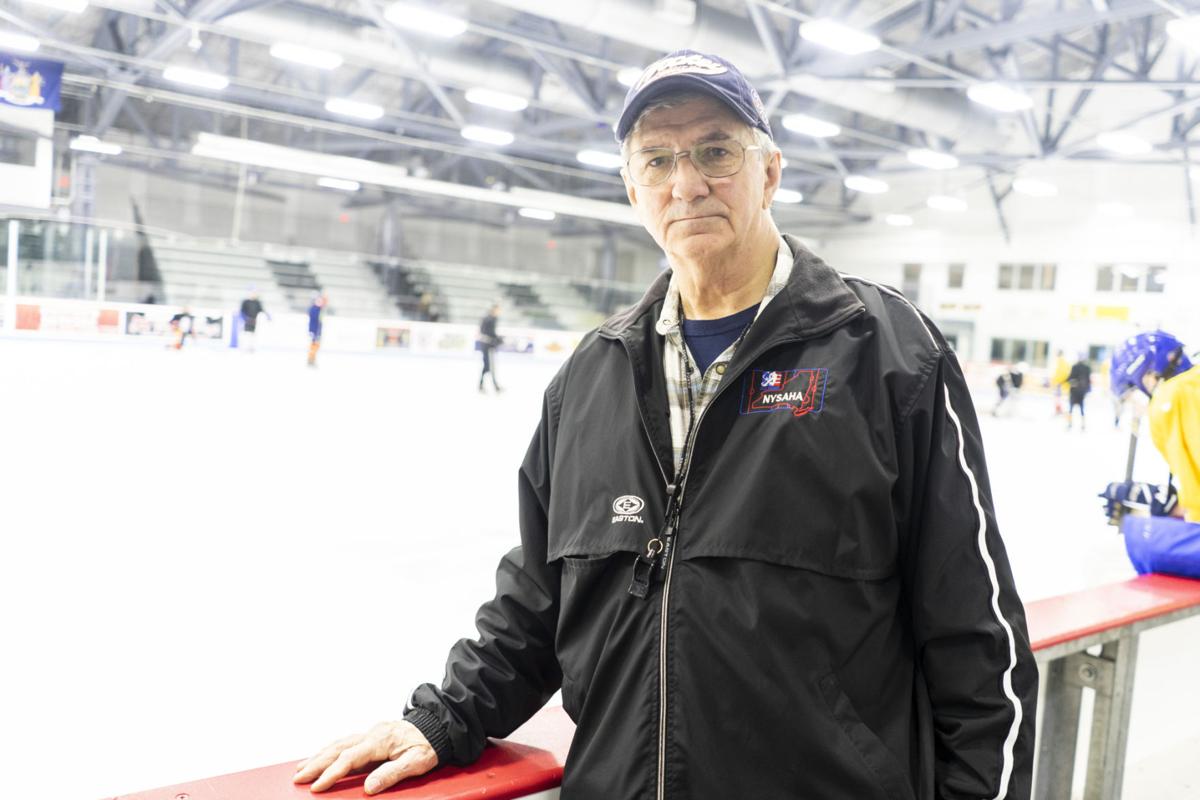 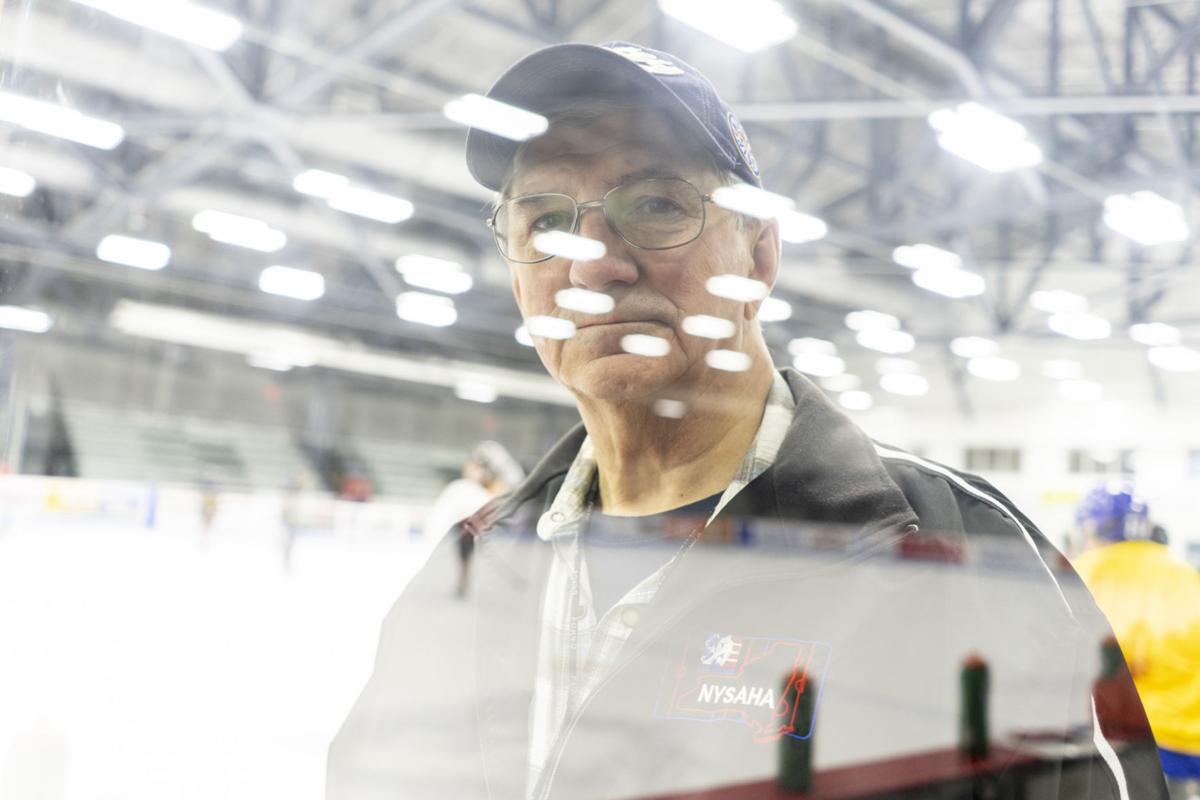 Head coach James O’Brien talks with an IHC goaltender after the team picks jerseys for the season at practice on Wednesday in Watertown. Julia Hopkins/Watertown Daily Times

An IHC hockey player takes a break between drills at practice on Wednesday in Watertown. Julia Hopkins/Watertown Daily Times

A member of the IHC coaching staff directs players during practice on Wednesday in Watertown. Julia Hopkins/Watertown Daily Times

When asked about his new endeavor as head coach of the Cavaliers, a smile comes across his face.

Now at the spry age of 74, O’Brien is taking on a new challenge — even for him — in his many years of coaching and officiating games in the north country.

“I think age is just a number,” said O’Brien, who grew up in Watertown and goes by the nickname of “Obie.

This is the first time O’Brien is coaching a varsity hockey team and he’s relishing the opportunity.

“I really liked the idea, I’ve always wanted to do it,” O’Brien said of coaching a high school team. “And now I have the opportunity to do it.”

O’Brien has more than 40 years experience in area youth hockey, including about 25 as a coach, and many more an official.

He has also worked some 40 years as a hockey official, many as a referee.

“Even though my kids quit (hockey) when they were young, I just kept right on going,” O’Brien said. “I really enjoy officiating, it was nothing for me to do 10 games in a week, but I like coaching, too.”

His years officiating games include 23 as referee-in-chief locally, chiefly with the Watertown Hockey Association, working mainly youth hockey games in the Watertown area, as well as Clayton, Alexandria Bay and Pulaski.

“I’m still a senior off-ice official and I’ve got my referee’s pass,” O’Brien said. “I enjoy that, but I’m looking forward to coaching again.”

The first team O’Brien coached was with a club team at Indian River back in 1976, at a level that was the forerunner of varsity hockey in the area.

“I expressed some interest in helping out this program,” O’Brien said of IHC. “The vice principal there at the time said ‘I keep asking around looking for another coach and your name kept coming up.’ And I said ‘there are lot of coaches around, but I’ll give it a shot.’”

The Cavaliers have their work cut out for them on the ice as the team won only four games last season, including just two in Section 3’s Division II league.

“Everything is going good,” O’Brien said. “We’ve got three new coaches, we’ve got some kids from last year. We’ve got five seniors and (nine) juniors, so we’ll look good for next year, too.”

But O’Brien, and his assistant coaches Eric Phillips and Bob Thomaris feel they are up to the challenge in guiding this season’s team.

“It’s really kind of like a whole new perspective,” O’Brien said. “And it was good picking up these two guys as assistant coaches, they really help in running practice.”

The team is once again made up of players from IHC, General Brown, Indian River and Watertown.

“We’ve got a young team, but they’re fast,” O’Brien said. “So we just have to see what they can do in competition, that’s all.”

This year’s team includes 13 returning players and 10 newcomers to the program. Among the returners are senior forwards Connor Clement, Gabe Horner and Donovan Howard, and senior defenseman Cole Grant.

The IHC program has struggled in recent years, but O’Brien and his staff are encouraged with the turnout of players as 29 student athletes tried out for the team.

“The buy-in here is pretty high,” Thomaris said. “We’ve got more players (than) we can dress for games right now. And I’ve told a few players that coming in and there’s a number that want to stick around here with no expectation of playing time. So that’s always a good sign considering how much of a commitment hockey is today in the first place.”

“We had five goalies try out as well, which is unusual,” O’Brien said.

O’Brien has been approached before in previous years about possibly coaching at IHC.

IHC will open its season when it plays Ontario Bay at 6:30 tonight in the first round of the Nicholson Tournament in Pulaski.

The Cavaliers’ home opener is against St. Lawrence Central at 6 p.m. Monday and they will begin Section 3 league play when they host Ontario Bay at 6 p.m. Thursday, with both games at the Fairgrounds Arena.

O’Brien is looking forward to the experience of coaching again and excited for his players as well.

“It’s a learning process for us, too,” O’Brien said of him and his coaches. “These guys are working them hard and they’re loving it. They’re learning new systems ... And I told them ‘we’re going to make your brain active, as well as your body and you might even have fun doing it.’”

O’Brien also enters the high school coaching ranks with the somewhat unique perspective of so many years experience working as a hockey referee and official.

“There’s some players out there that over the years, I probably used to put them or their brothers in the penalty box or even coached some of their fathers,” O’Brien said with a laugh. “So I think this should be fun.”