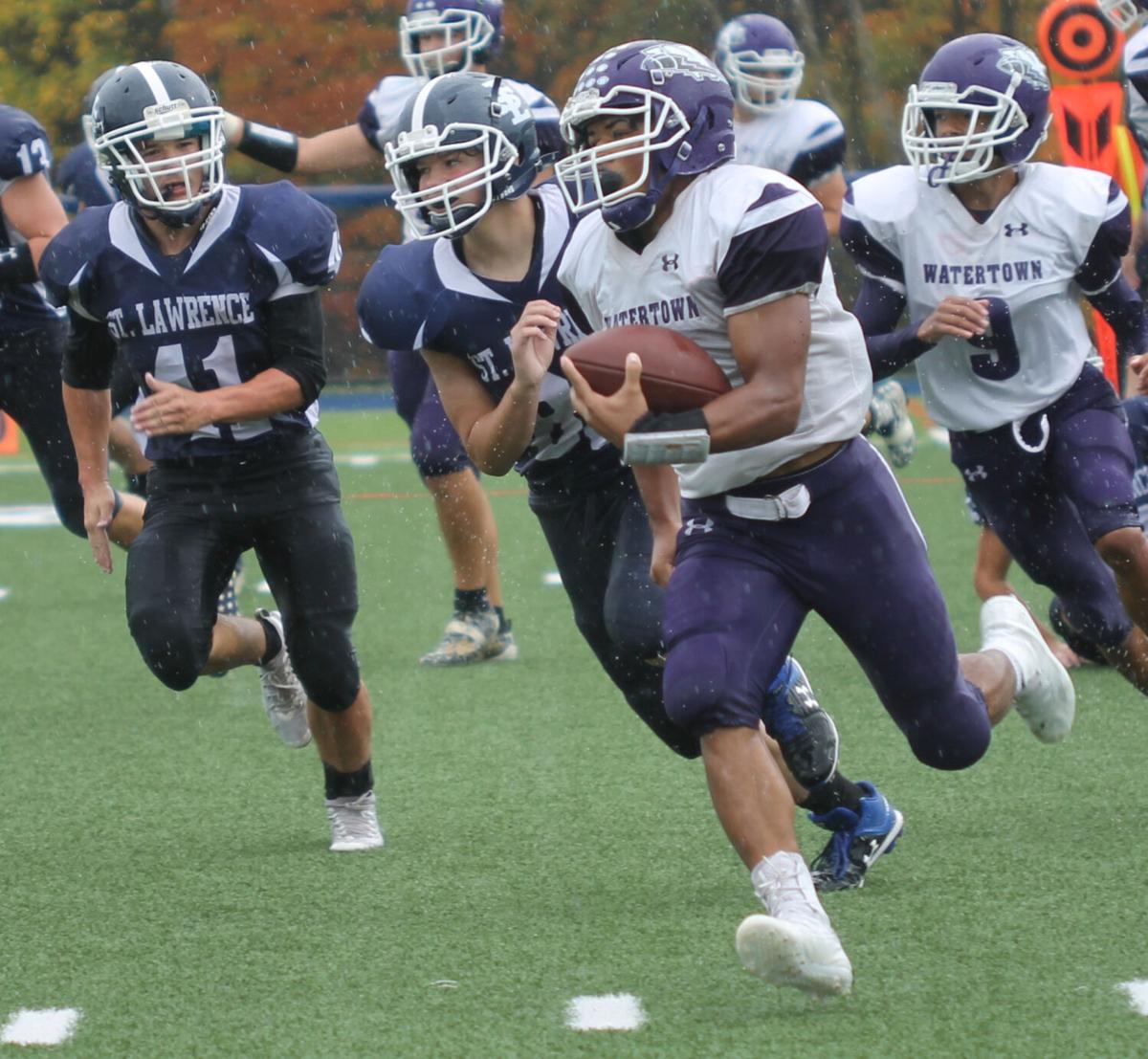 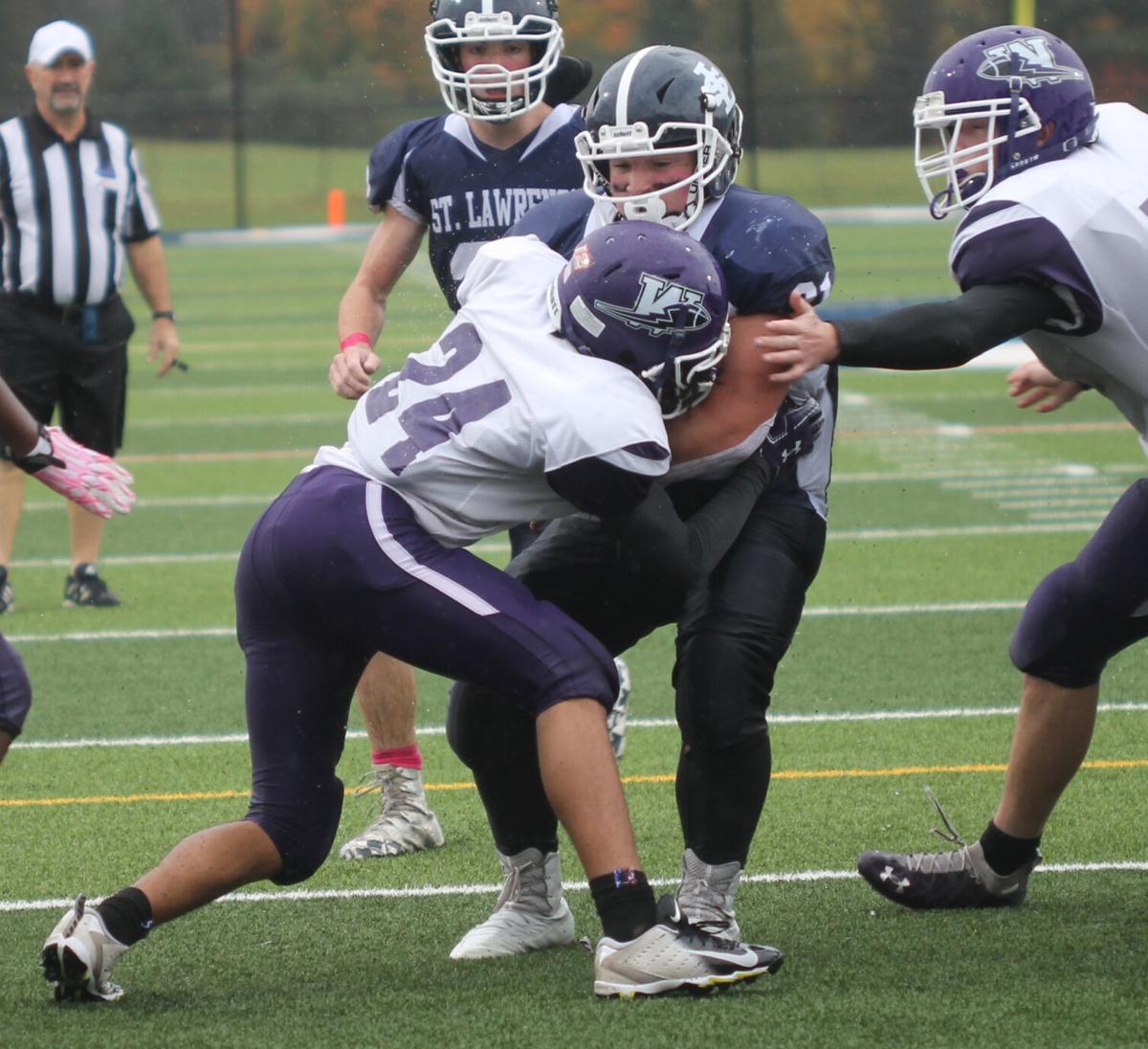 Watertown’s Tayvon Johnston steps up to prevent St. Lawrence’s Ethan White from getting to the end zone on Saturday. Alain St. Pierre/Courier Observer

Watertown’s Tayvon Johnston steps up to prevent St. Lawrence’s Ethan White from getting to the end zone on Saturday. Alain St. Pierre/Courier Observer

BRASHER FALLS — Deante Hall rushed for four touchdowns to propel the Watertown football team to a 44-8 triumph over St. Lawrence Central on Saturday in a Northern Athletic Conference game.

Joe Davis and Jack Clough each ran for a touchdown for the Cyclones, who improve to 4-1 on the season.

Hall ran for scores of 27, 29 and 27 yards in the first half and Davis scored on a one-yard run as Watertown built a 30-0 advantage by halftime.

Tommy Storrin ran four a four-yard touchdown in the fourth quarter to lead the Larries (0-5).

The Indians edged the Beavers in a Section 3 Class D division crossover game in Beaver Falls.

Gavin Fowler ran for a touchdown to pace Beaver River (2-4) against Waterville (1-5).

Fowler rushed for 57 yards on 17 carries for the Beavers and quarterback Jonah Mullin totaled 66 yards on the ground on 20 touches.

Tyson Beaudin scored twice, including the winner in overtime, as the Bulldogs (7-7, 7-5) upended the Colts in an East Division game in South Colton.

Aidan Langdon stopped 26 shots to lead the Huskies past Canton (3-11, 2-8) in a Central Division game in Malone.

Ayden Moser’s hat trick powered the Beavers to a Frontier League “C” Division win over the Falcons (4-12, 3-11) at Beaver Falls.

Andrew Chartrand and Josef Zuniga chipped in with goals for Beaver River (3-13, 3-11).

Drew Ortlieb and Trey Smith each scored a goal as the Red Raiders blanked the Golden Knights in a nonleague game in Lowville.

Goalkeeper Colton Simpson made five saves to record the shutout for Lowville (11-5) against Holland Patent (6-9-1).

Emma Roggie scored a pair of goals in the first half, including one on a penalty kick, as Beaver River won a rain-shortened “C” Division game against South Lewis (7-8, 5-7) at Beaver Falls.

The game was called with 18 minutes to go in the second half and considered completed.

Kaylee Zehr supplied a goal and two assists for Beaver River (12-2, 10-1). Adalynn Olmstead and Avery Olmstead each added a goal.

Macy Shultz figured in South Jefferson’s first three goals with a goal and two assists within the first 26 minutes as the Spartans won the nonleague game over the Golden Knights (8-7-1) at Copenhagen.

Alysse Perry and Jackie Piddock each supplied a pair of goals for South Jefferson (10-5-1).

Three different Red Raiders logged goals in their nonleague victory over the Bulldogs at Westmoreland.

Olivia Merrill made 25 saves to help the Blue Devils (6-5-3, 5-4-3) to a scoreless tie with Gouverneur in an NAC Central Division game in Ogdensburg.

Alexa Doe ran a time of 19 minutes, 21.7 seconds on the 5-kilometer course as South Jefferson placed five runners in the top 10 at the John Bernard Adirondack Invitational at Boonville.

Karsyn Burnash, Carly Worden, Annabelle Renzi and Chloe Abbott all earned spots in the top 10 for South Jefferson, which won the team event.

Fielding turned in a mark of 19:45.0 on the 5K course to finish behind Luke Tighe of Pulaski.