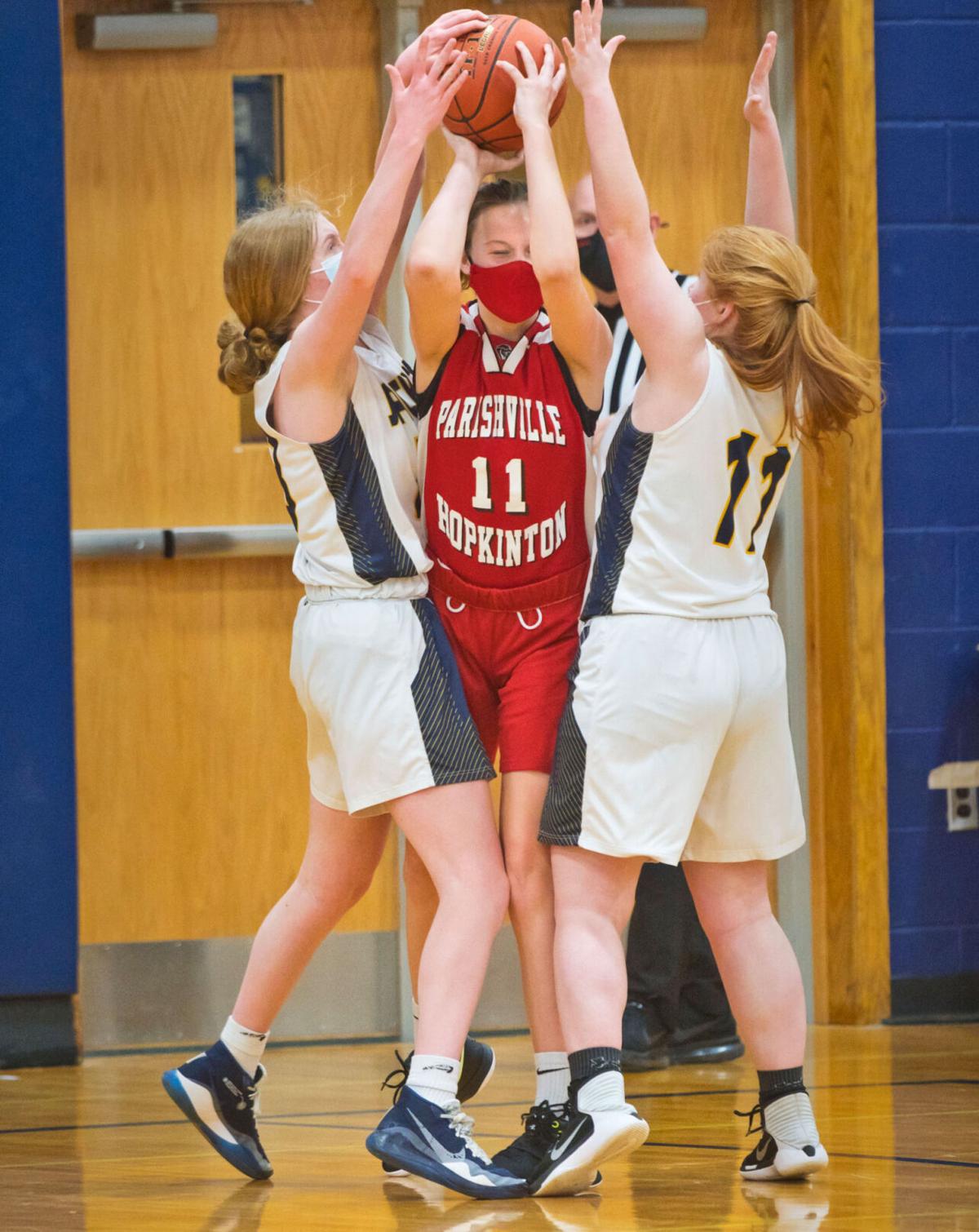 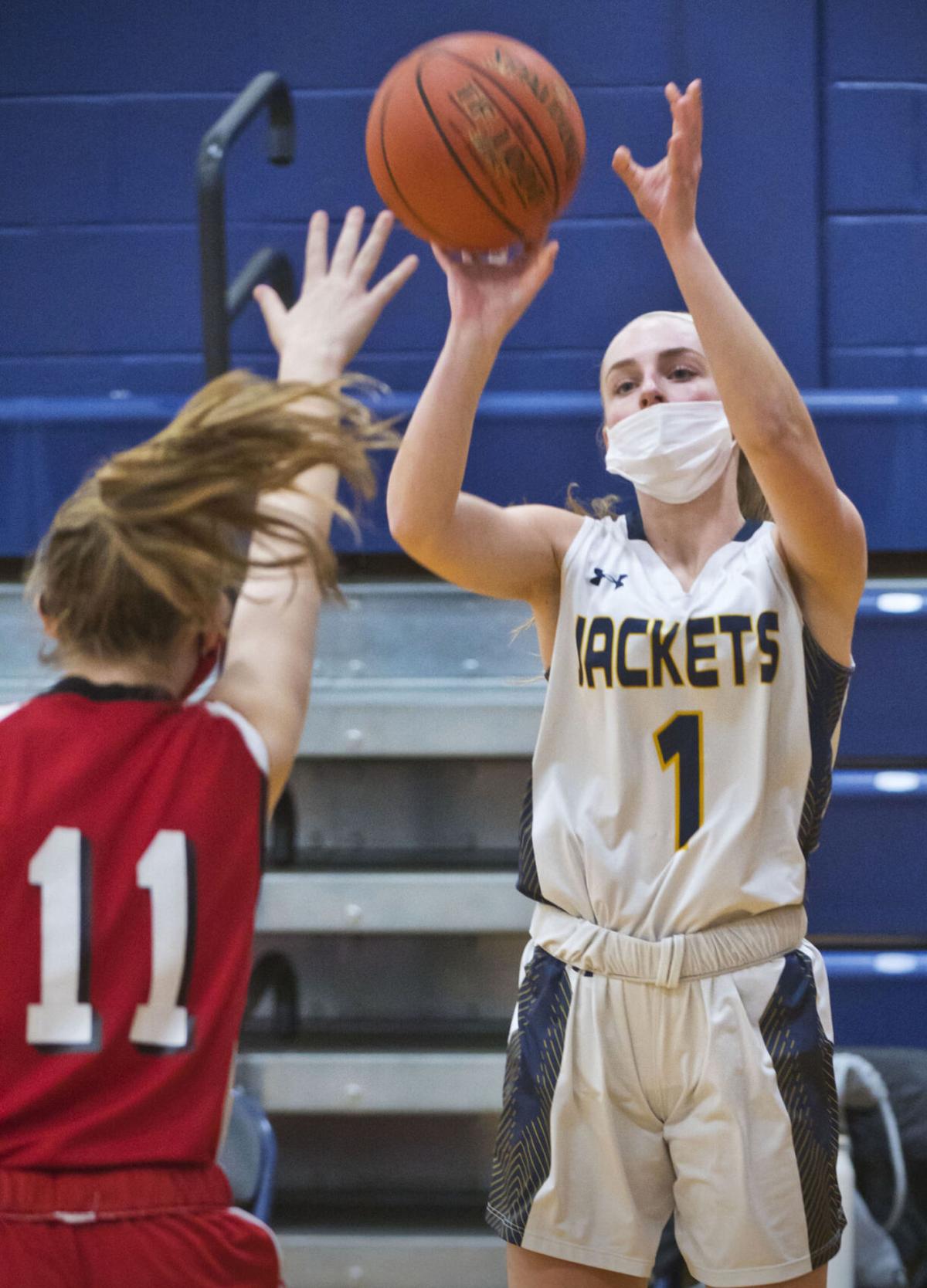 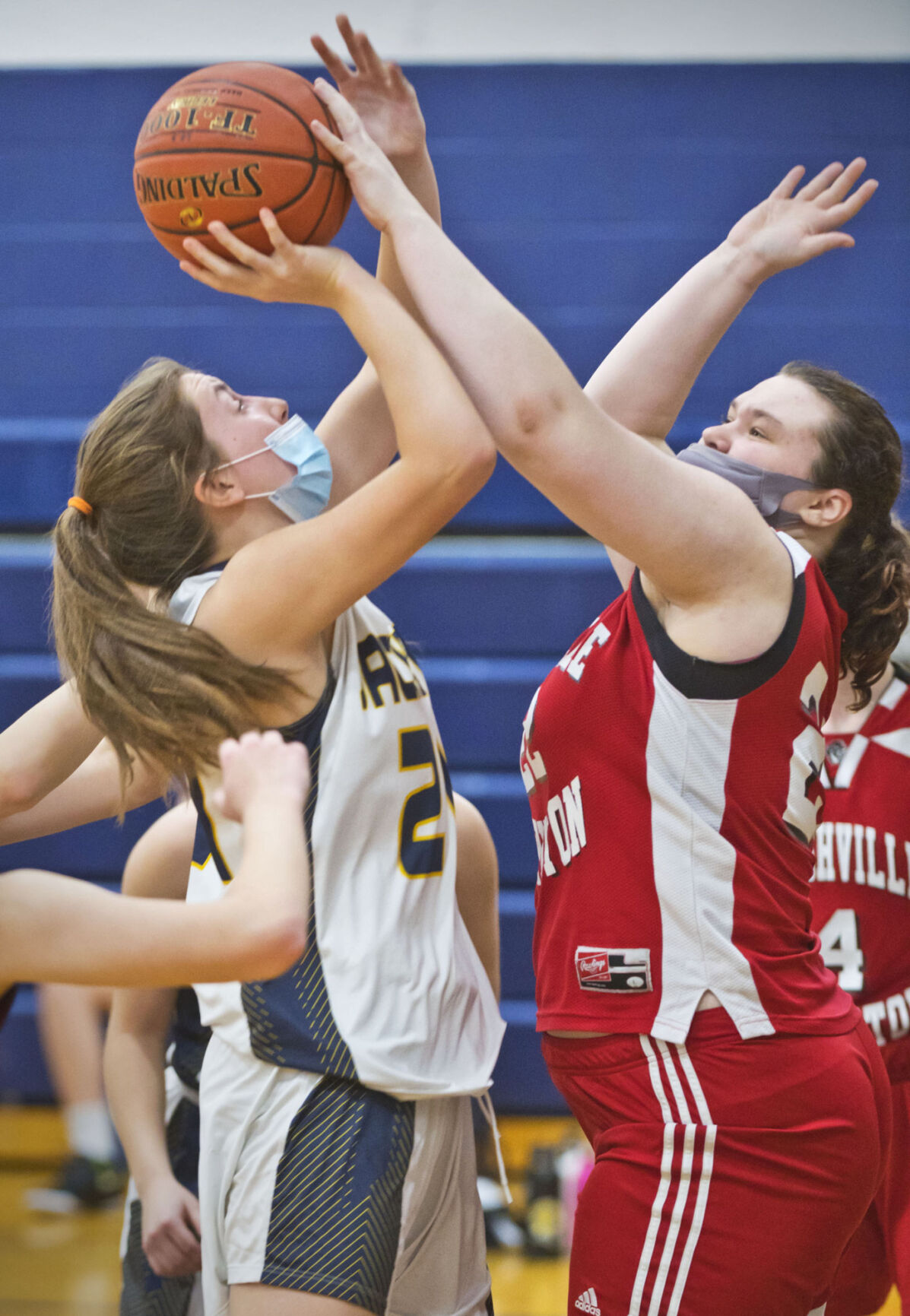 Parishville-Hopkinton’s Mackenzie Sagriff, right, gets a hand on a shot attempt by Madrid-Waddington’s Hailey Marcellus during the first half of Wednesday’s girls basketball game in Madrid. Christopher Lenney/ Watertown Daily Times 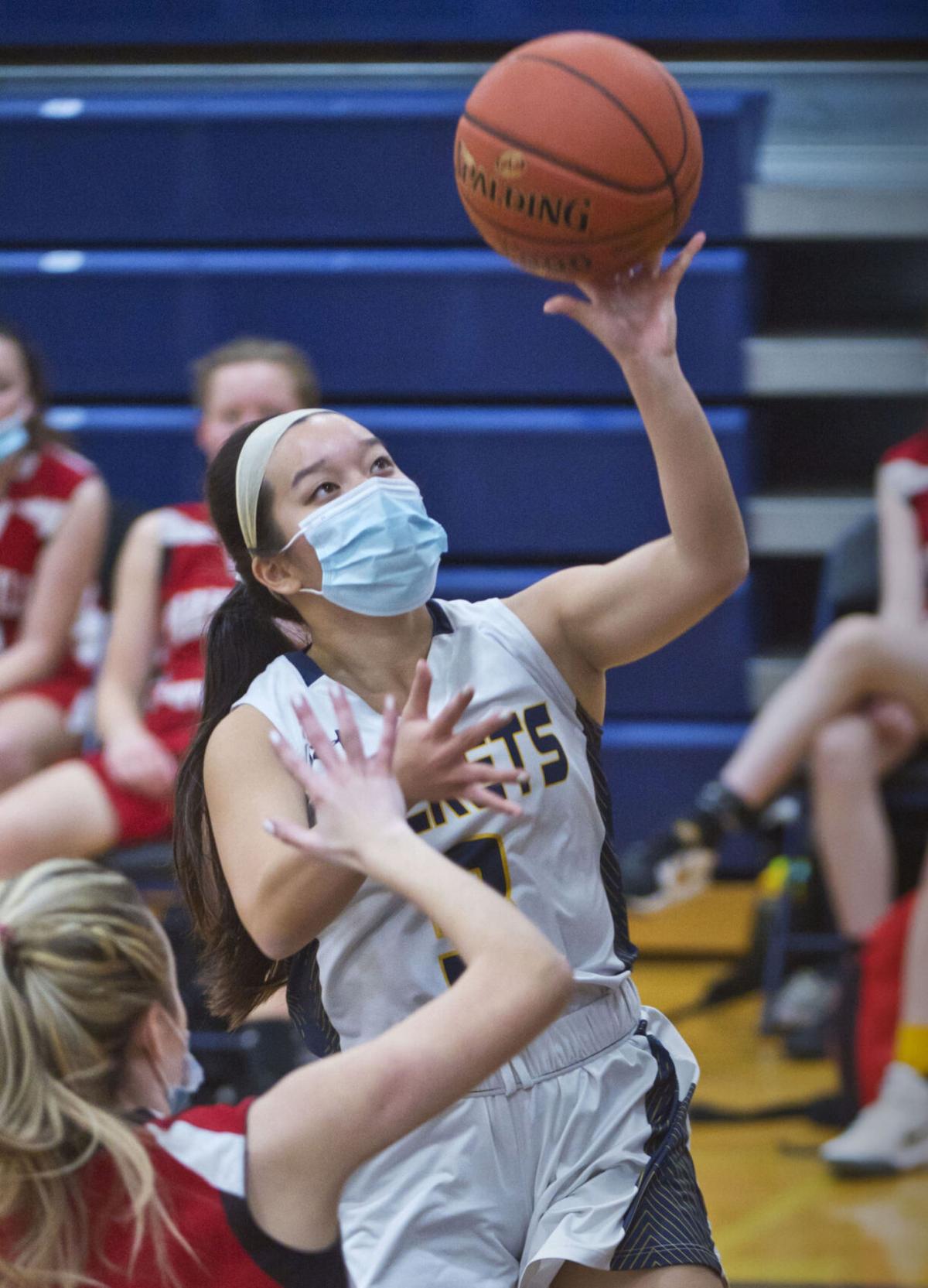 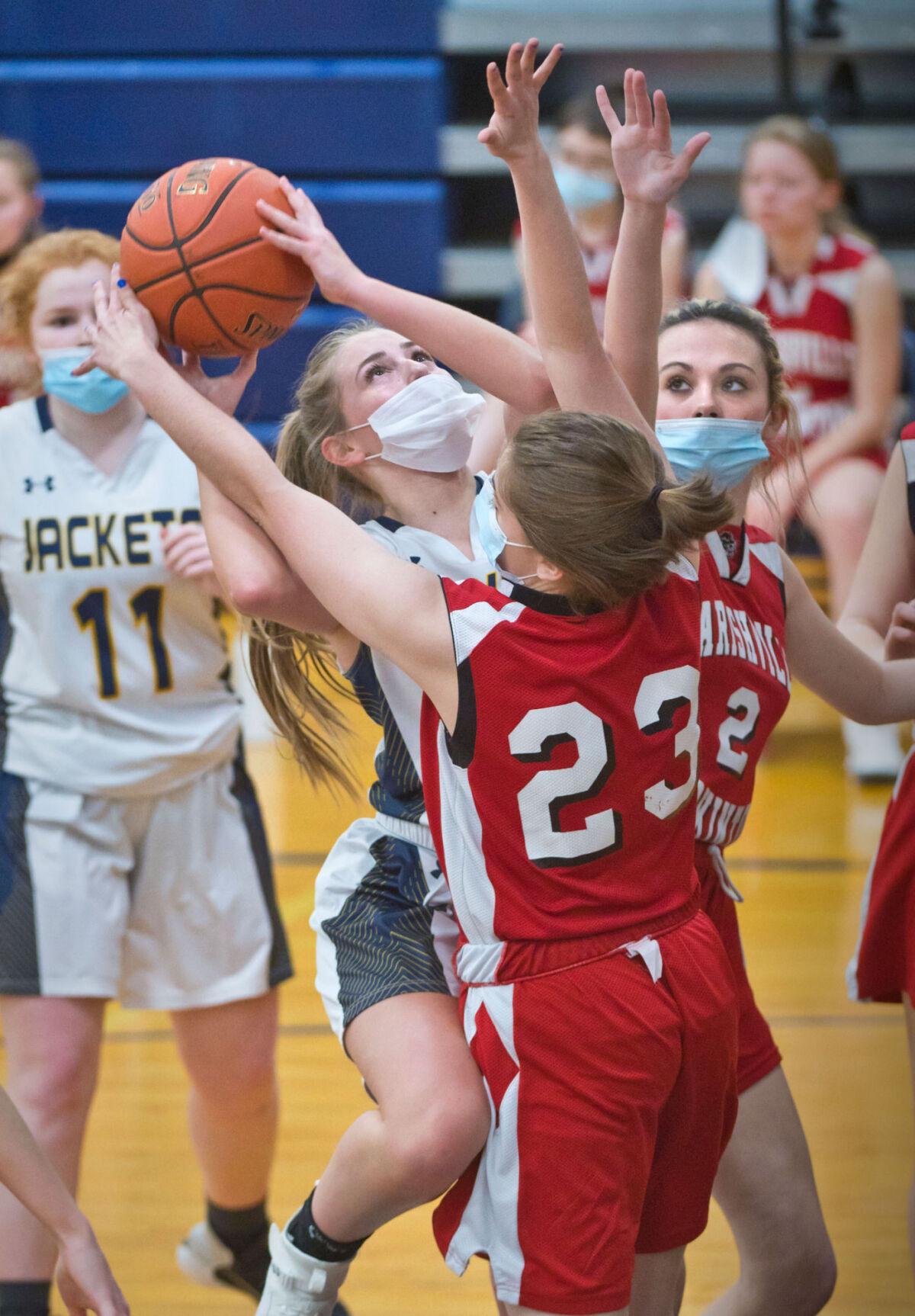 Madrid-Waddington’s Grace Plumley, left, tries to get a shot off over the defense of Parishville-Hopkinton’s Cassie James, middle, and Avery Collins during the first half of Wednesday’s girls basketball game in Madrid. Christopher Lenney/ Watertown Daily Times

Parishville-Hopkinton’s Mackenzie Sagriff, right, gets a hand on a shot attempt by Madrid-Waddington’s Hailey Marcellus during the first half of Wednesday’s girls basketball game in Madrid. Christopher Lenney/ Watertown Daily Times

Madrid-Waddington’s Grace Plumley, left, tries to get a shot off over the defense of Parishville-Hopkinton’s Cassie James, middle, and Avery Collins during the first half of Wednesday’s girls basketball game in Madrid. Christopher Lenney/ Watertown Daily Times

Teagan Jordan supplied 32 points as the Golden Knights defeated the Colts (1-8) in a nonleague contest in Lisbon.

Drew Harmer led the Yellowjackets (4-6) with 19 points in a nonleague victory over the Panthers in Parishville.

In the opening game of the season for both teams, Class C Lowville defeated Class A Watertown on the road.

The Cyclones held their own, Deante Hall scored four touchdowns and rushed for over 200 yards.

Both teams are coming off seasons where they won sectional championships.

The Vikings’ (2-2) Michael McCarthy got third place as they topped the Comets, 23-32. Terry Eggleston earned a fourth-place finish for Sandy Creek (0-4).

MaKenna Nungester led a balanced effort with a third-place showing as Indian River beat Sandy Creek and Thousand Islands in a three-way meet at Philadelphia.

Gabrielle Brown won the race on the 3-kilometer course with a time of 13:46.2 for the Comets (3-1), who beat the Vikings 22-34. Anna Huizenga finished four-tenths of a second behind Brown to grab second for Thousand Islands (1-3).

Lucas Hernandez scored two goals and recorded an assist as the Lions blanked the Warriors in Dexter.

Eric Randall got a goal and two assists while Lucas Lavarnway picked up his first varsity win with two saves for General Brown (2-0).

Shareef Stokely, Caden Miller and Lucas Graves scored a goal each as the Golden Knights blanked the Patriots in the Fall Season II opener for both teams in Copenhagen.

Goalie Hayden McAtee made three saves to register the shutout for Copenhagen and Ryan Hunt finished with 13 saves for Sackets Harbor.

Macy Shultz and Jackie Piddock scored a goal each to pace the Spartans past the Cavaliers in Adams.

Goalies and Audrey Bibbins and Madison Pfleegor each made one save to combine on the win for South Jefferson (2-1).

Kailey Montgomery scored the game’s first goal in the first half for Immaculate Heart Central (1-1).

Kori Nichols and Megan Milkowich each scored twice as the Lions beat the Warriors at Dexter.

Jenna Pavlot and Trisha Thompson each scored as the Vikings shut out the Panthers in Belleville’s season-opener in Clayton.

Sarah Kilburn and McKenzie Way each collected four first-place swims as the Cyclones topped the Warriors (0-3) in a Frontier League “A” Division meet.

Kilburn won the sprint events of the 50 and 100-yard freestyle races while Way got victories in the 100 breaststroke and 200 freestyle for Watertown (4-0). The duo teamed up on the winning 200 freestyle and 200 medley relays for the Cyclones.

McKenna Bowles and Kenadee Love both won two events as the Larries defeated the Huskies in a virtual meet where each team swam at their home pools and exchanged times.

Bowles won the 200-yard individual medley and the 100 butterfly and Love won the 50 and 100 freestyles for St. Lawrence Central. It was the opening meet for each team.