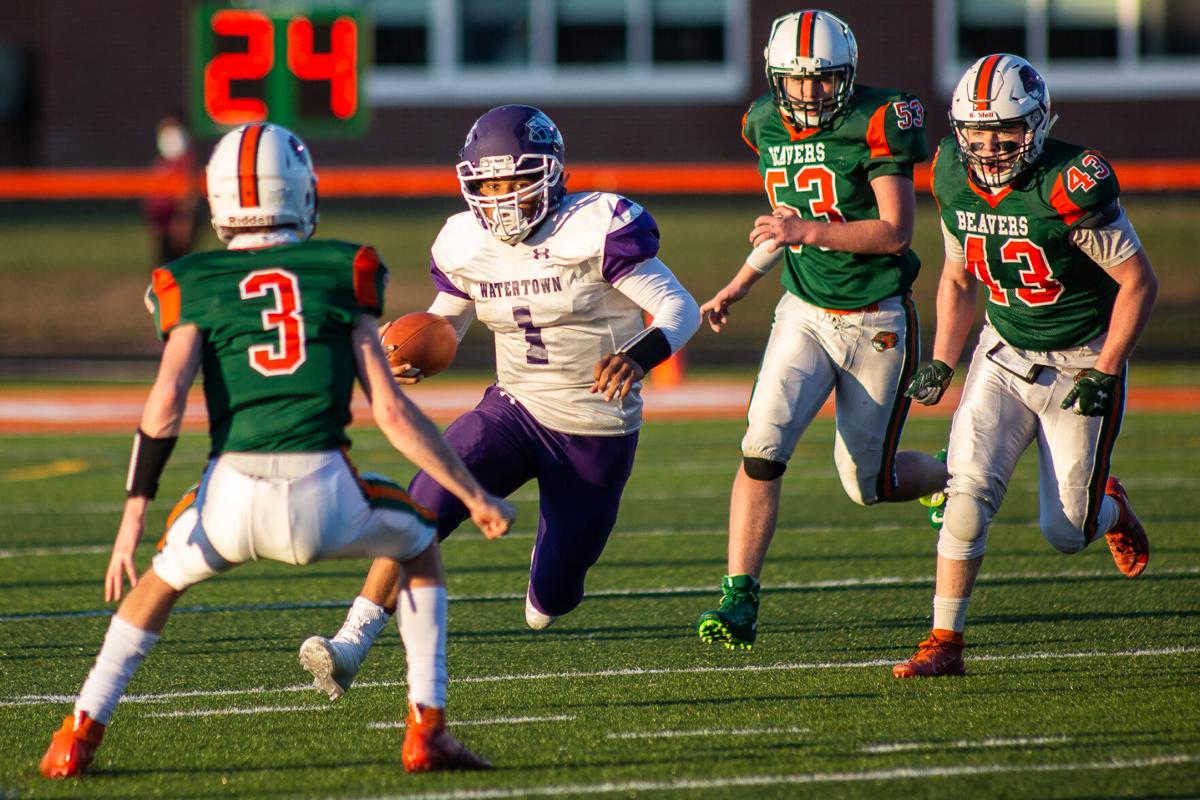 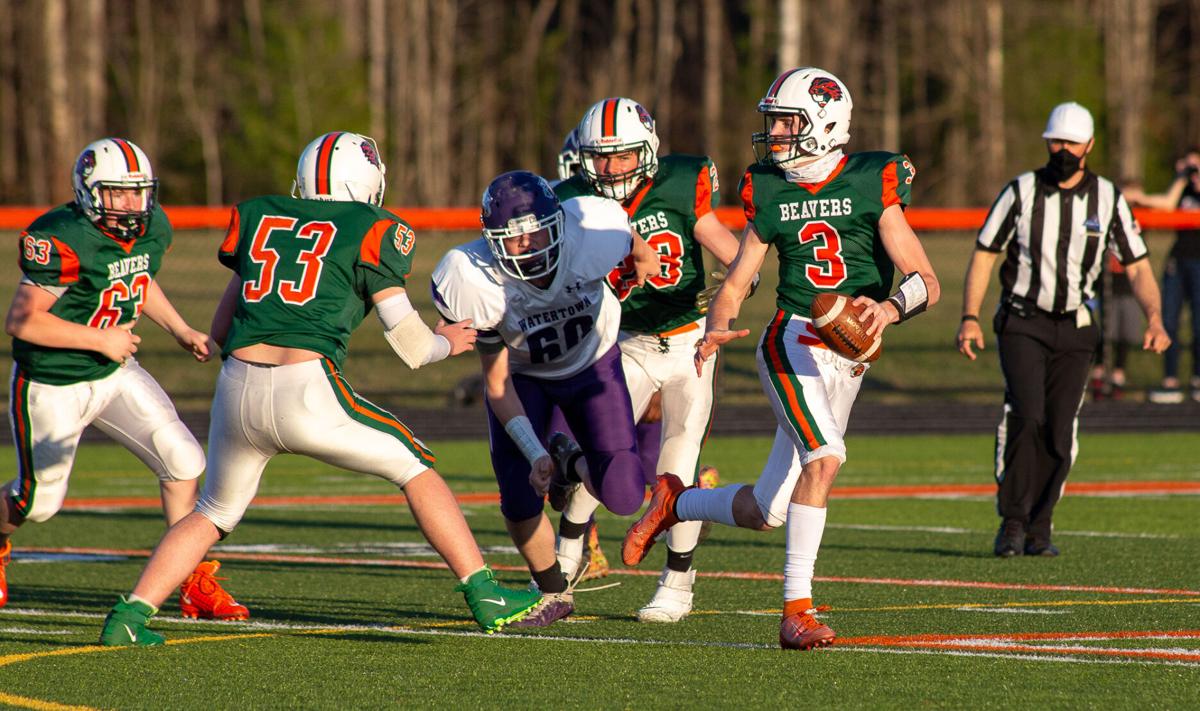 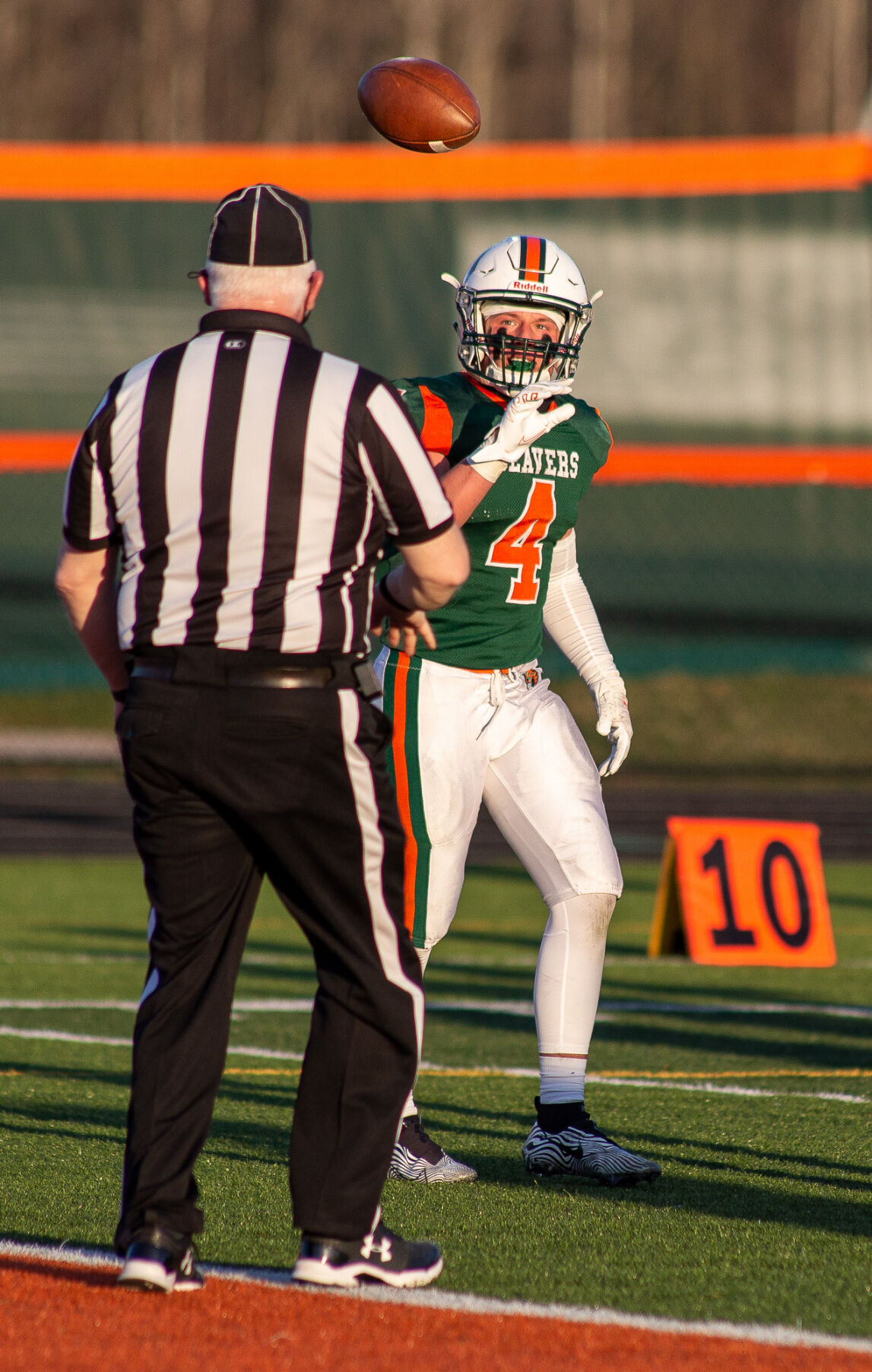 Beaver River’s Noah Zehr tosses the ball to a referee after scoring a touchdown against Watertown in the first quarter of Thursday’s game in Beaver Falls. Kara Dry/Watertown Daily Times 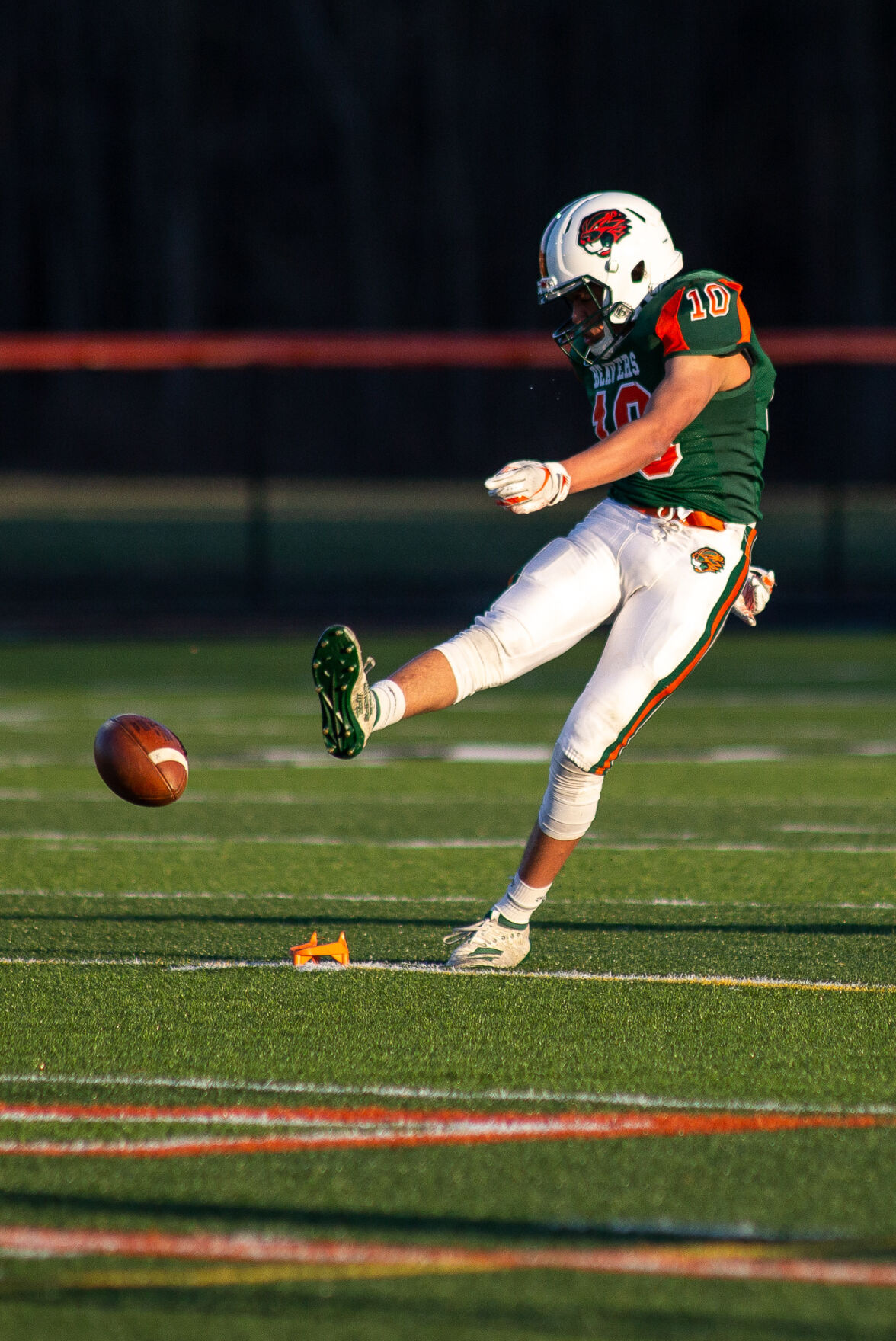 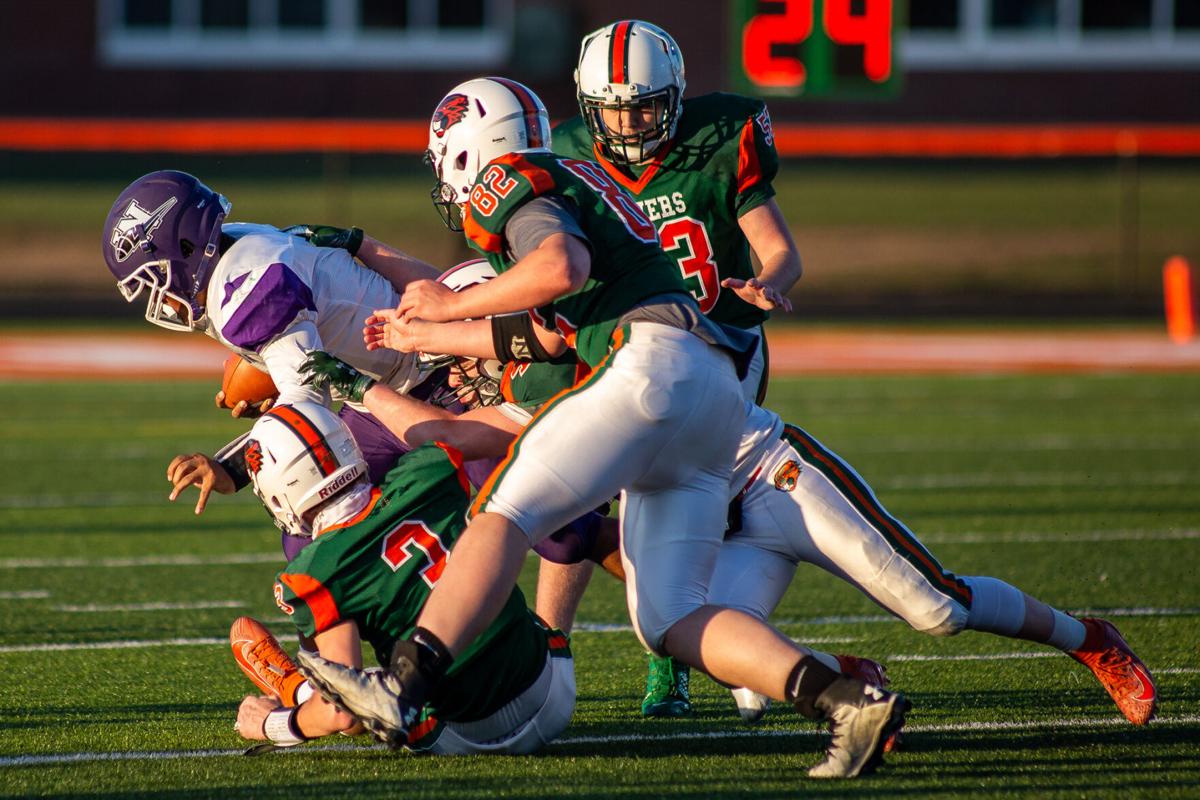 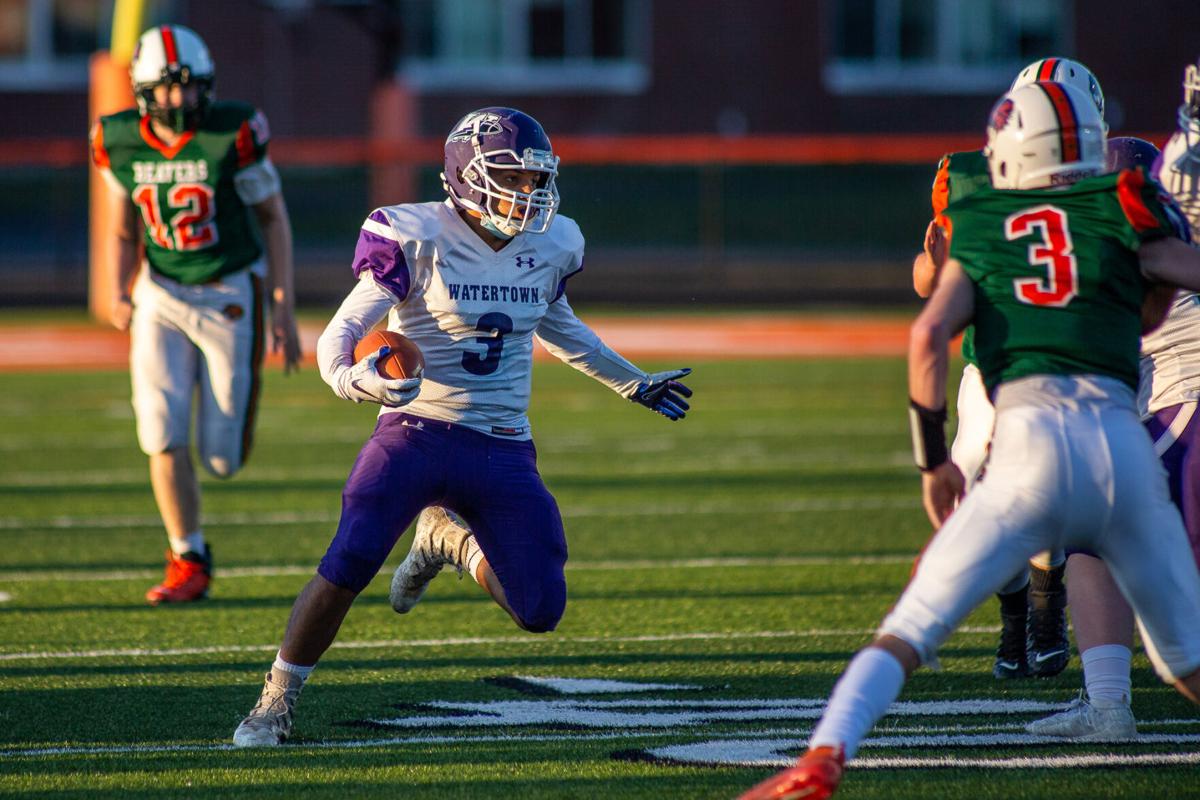 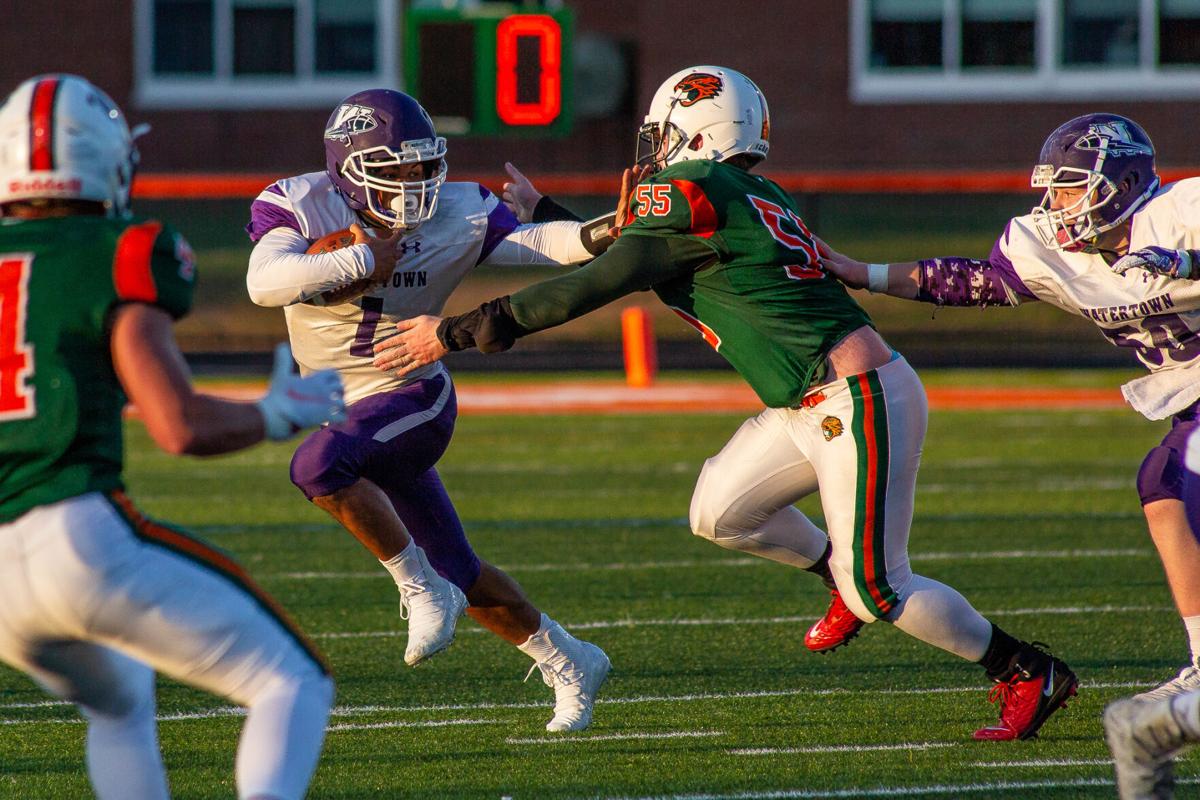 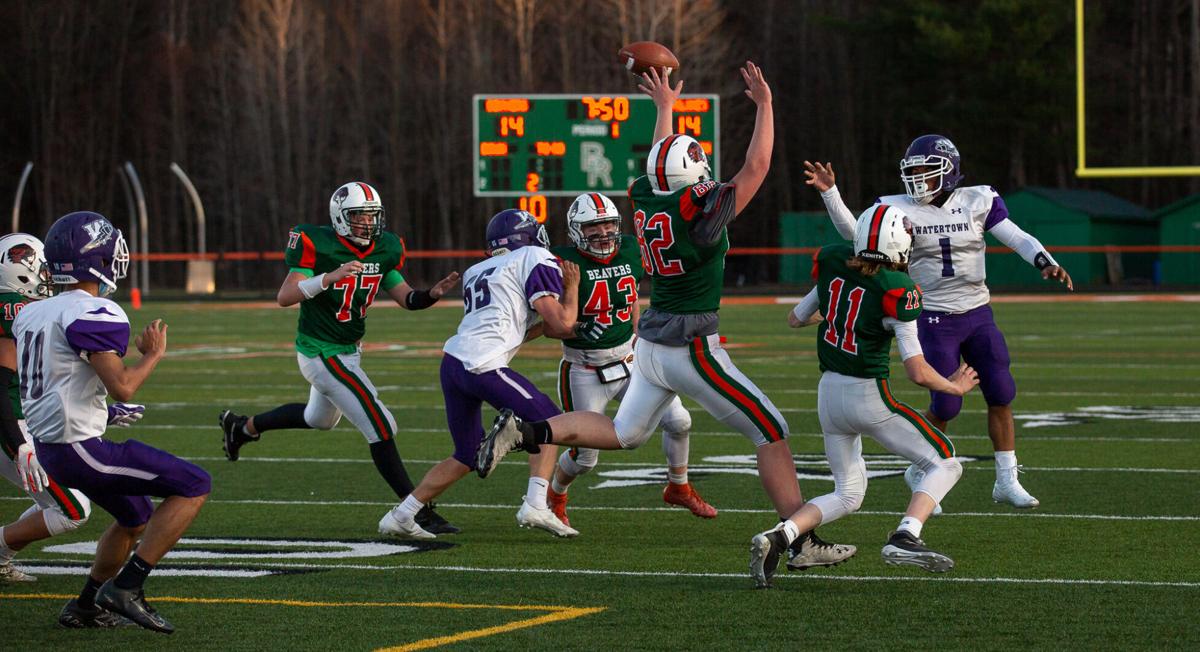 Beaver River’s Noah Zehr tosses the ball to a referee after scoring a touchdown against Watertown in the first quarter of Thursday’s game in Beaver Falls. Kara Dry/Watertown Daily Times

The junior quarterback, whose greatest asset is his legs, just needed to complete the two-point conversion for the win but was stopped on a last minute hit, his knee falling to the ground with the ball just outside the end zone.

He made up for it in his next offensive attempt in quadruple overtime.

With Beaver River having failed to score in the period’s first attempt, Hall kept the ball, cut left toward a wide open hole. From 18 yards out, Hall cruised into the end zone to cap off a 58-52 four-overtime win for the Cyclones.

The four overtime periods summed up the game as a whole — two evenly matched teams going back and forth — testing each other’s strengths.

“I just feed off of my guys, their energy, I feed off their energy,” Hall said of his teammates. “If they give me good energy, I’m going to do whatever I can for them.”

Hall rushed a whopping 30 times for the Cyclones (1-1), picking up 223 yards and scoring six touchdowns. He scored all four touchdowns for Watertown in the overtimes.

His longest was a 44-yard touchdown midway through the fourth quarter, which gave the Cyclones a temporary lead.

But despite a few long runs, Hall had to battle with Beaver River’s defense on almost every run.

“I think sometimes he gets himself in a rush a little bit,” Watertown coach Kyle Lalonde said of Hall. “Sometimes, he needs to be patient and wait for his blocks to develop a little bit more.

Hall, a junior, is in his second year as the Cyclones’ starting quarterback, Lalonde has seen him develop and mature at the position.

“I think he has a better understanding of the offense,” Lalonde said. “I think he has developed in regards to that. And he’s just a good runner and he’s starting to communicate a little bit better.”

Hall can typically bend a defense to his will, but Beaver River (0-2) didn’t budge as easily.

The Beavers, which played a defensive line consisting of three freshmen and two sophomores, stood their ground on multiple occasions.

“That defense is actually pretty good, I’m not going to lie, I’ll give them props,” Hall said.

“They were sinking down field and I just cut up,” he added.

The Cyclones couldn’t afford to waste many offensive opportunities because waiting to step on the field were the Beavers and their strong passing game.

Sam Bush, the senior quarterback in his third year as a starter, finished the game completing 20 of 37 passing attempts, throwing for 255 yards and six touchdowns.

Zacchaeus Lacomb was his top target, making nine catches for 125 yards and hauled in four touchdowns.

Bush also had his eyes locked on Noah Zehr, finishing with eight catches for 131 yards and a touchdown.

Not many teams in the north country pass like Beaver River do, defending it proved to be a challenge that required constant adjustments.

“(Bush) was not just a passing quarterback, but a quarterback who is mobile and that’s very difficult to prepare for,” Lalonde said. “With us not passing a lot, we don’t get a lot of work on it. We got beat a few times, but I think overall we stepped up in terms of our coverage.”

For the seniors in the game, playing intense overtime games such as Watertown versus Beaver River on Thursday night is incredibly meaningful.

“Me as a senior this year, it means everything,” Cyclones linebacker Kenny Forbes said. “This is it for me, I’m never going to be able to do this with these guys again, ever.”

Riley Connell and Aidan Reff each scored twice as Watertown stretched its unbeaten streak to four with a victory at Carthage.

Evan Burnett also scored and Carter Benham assisted on two goals for the Cyclones (4-0). Watertown scored four goals within 12 minutes of the second half after leading 1-0 at intermission.

Kadince Bach won two events as the Comets used a balanced effort to beat the Vikings in a Frontier League interdivision meet.

Bach took the diving competition and was part of the winning 400-yard freestyle relay for Carthage (2-2-1).

Rebecca Lantier and Franchesca Cartaya teamed up on the winning 200 medley and 200 freestyle relays while winning two individual events for Thousand Islands (0-3-1).