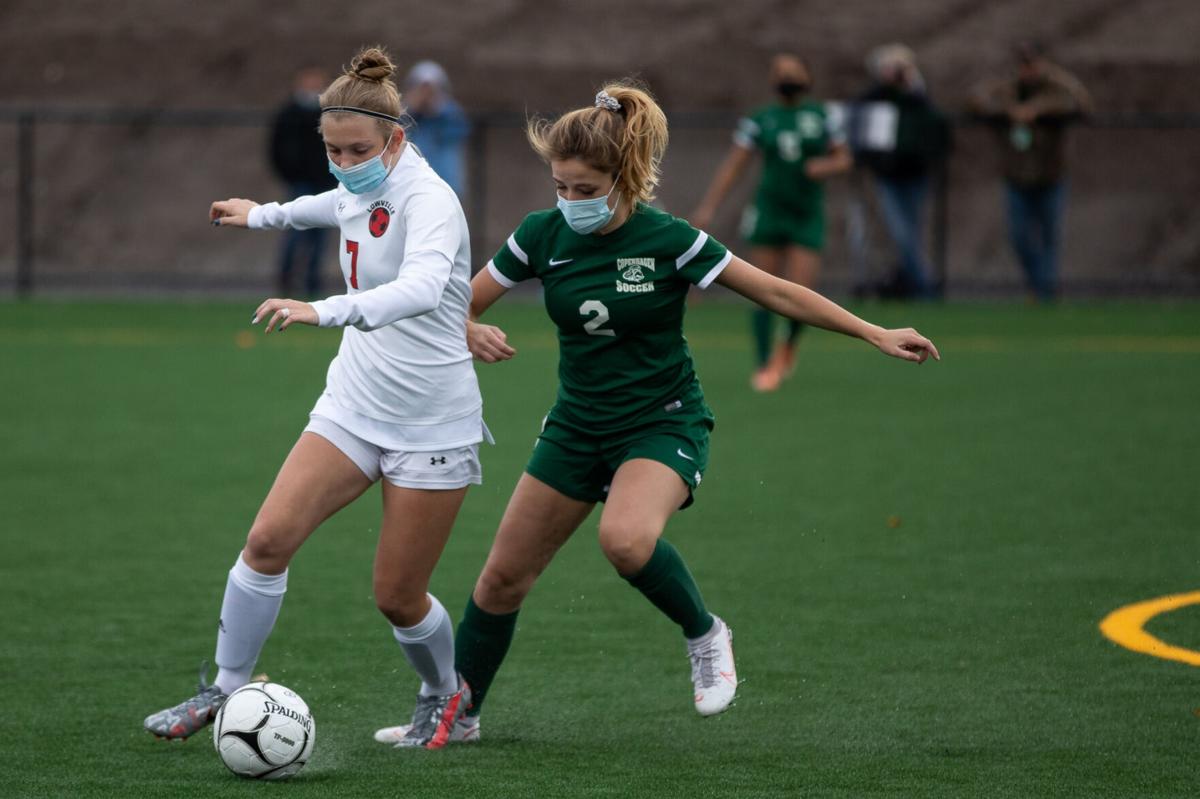 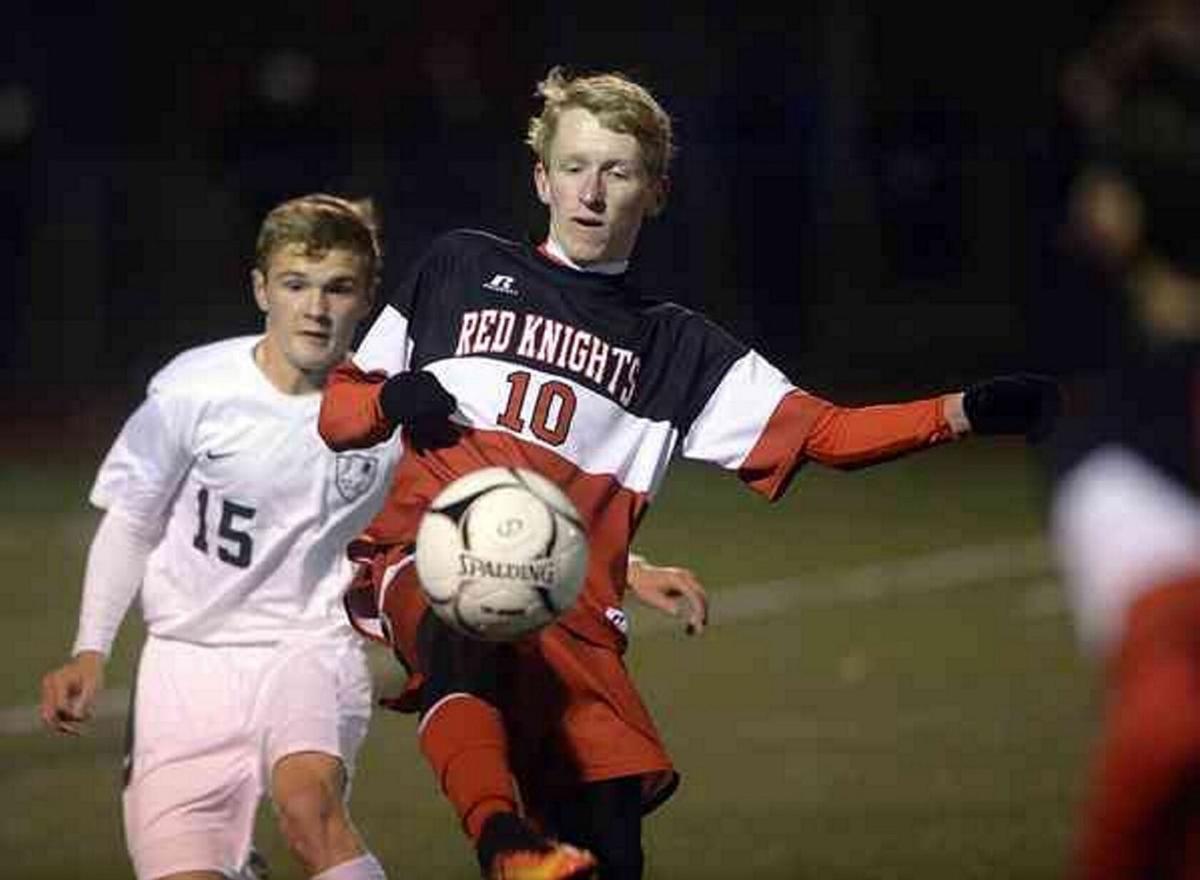 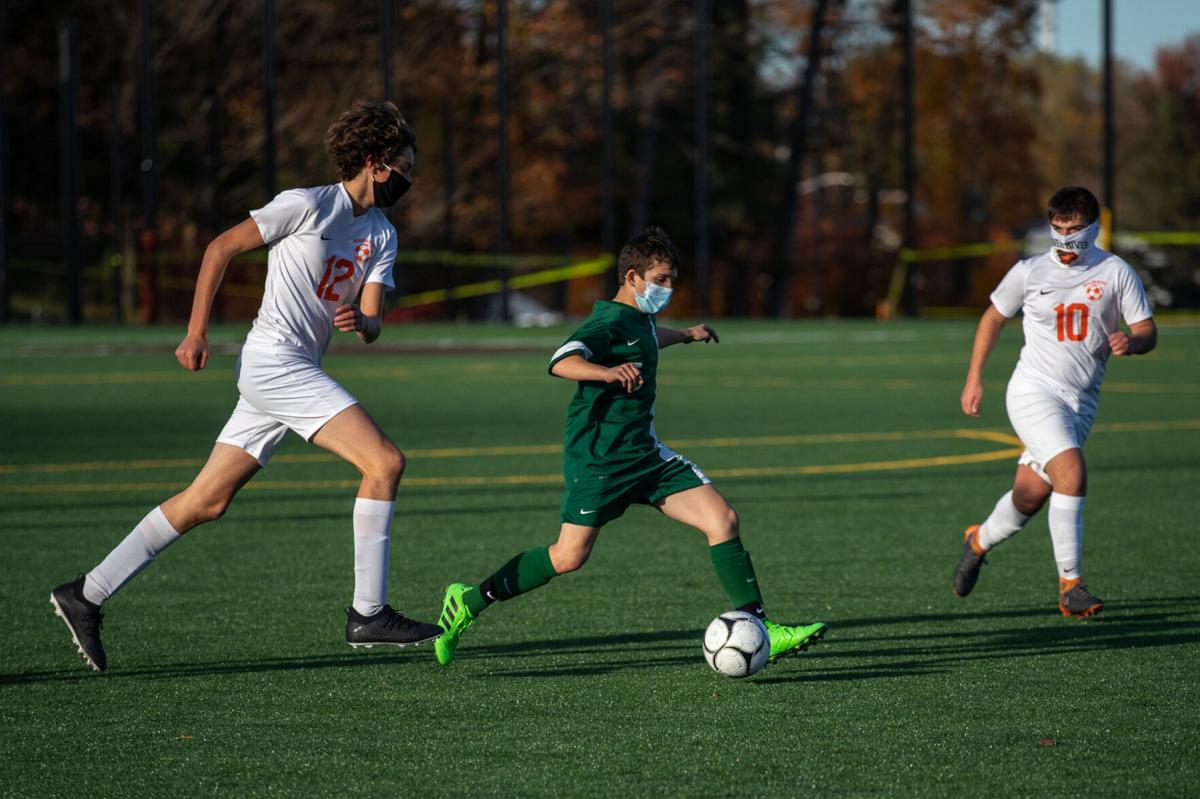 Copenhagen’s Chase Nevills, middle, attempts to advance the ball against Beaver River during the first half of a boys soccer game in October in Copenhagen. Kara Dry/Watertown Daily Times 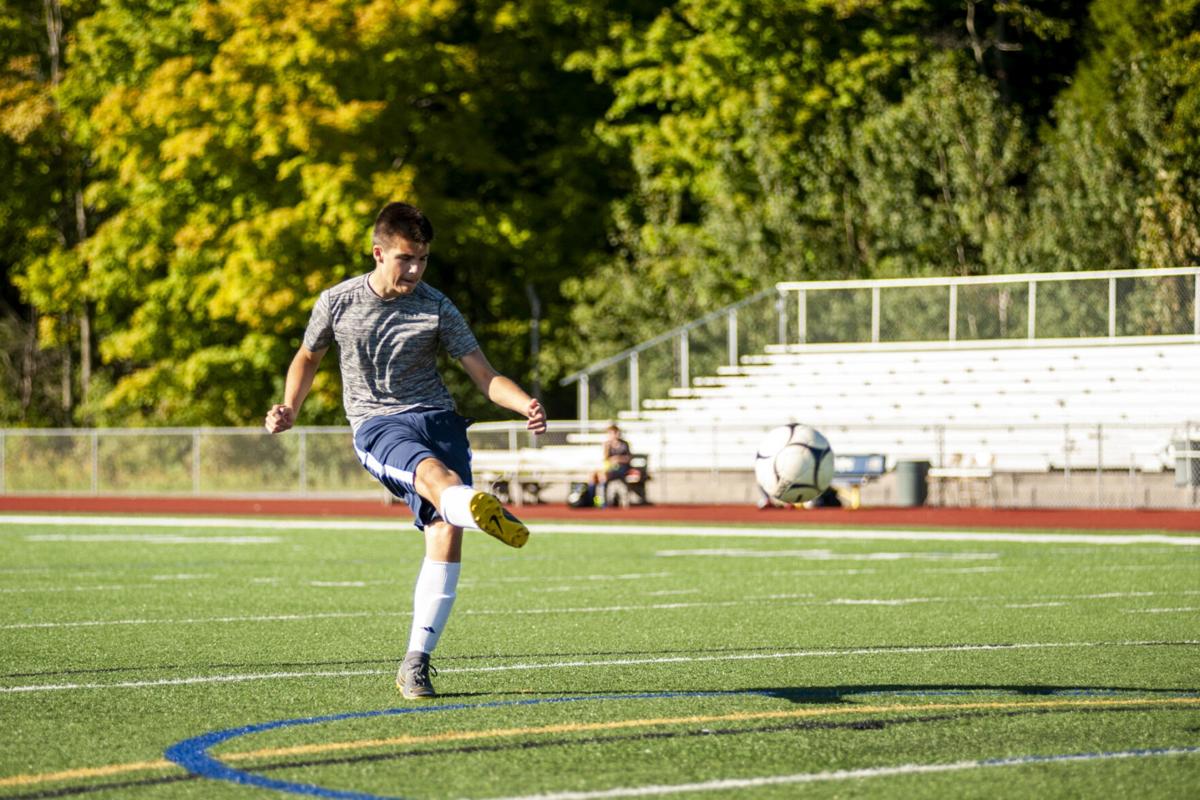 General Brown’s David Jenner fires the ball into the net during a team practice in the 2019 season. Watertown Daily Times 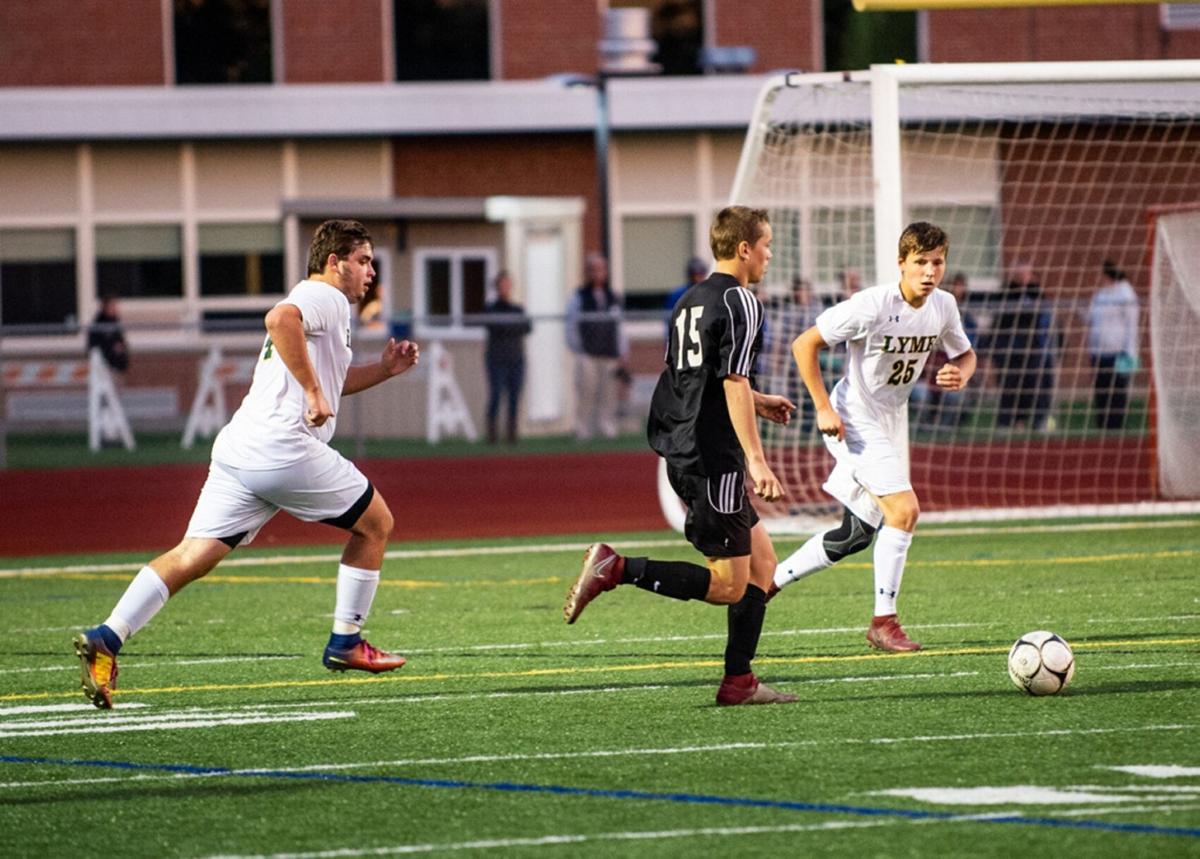 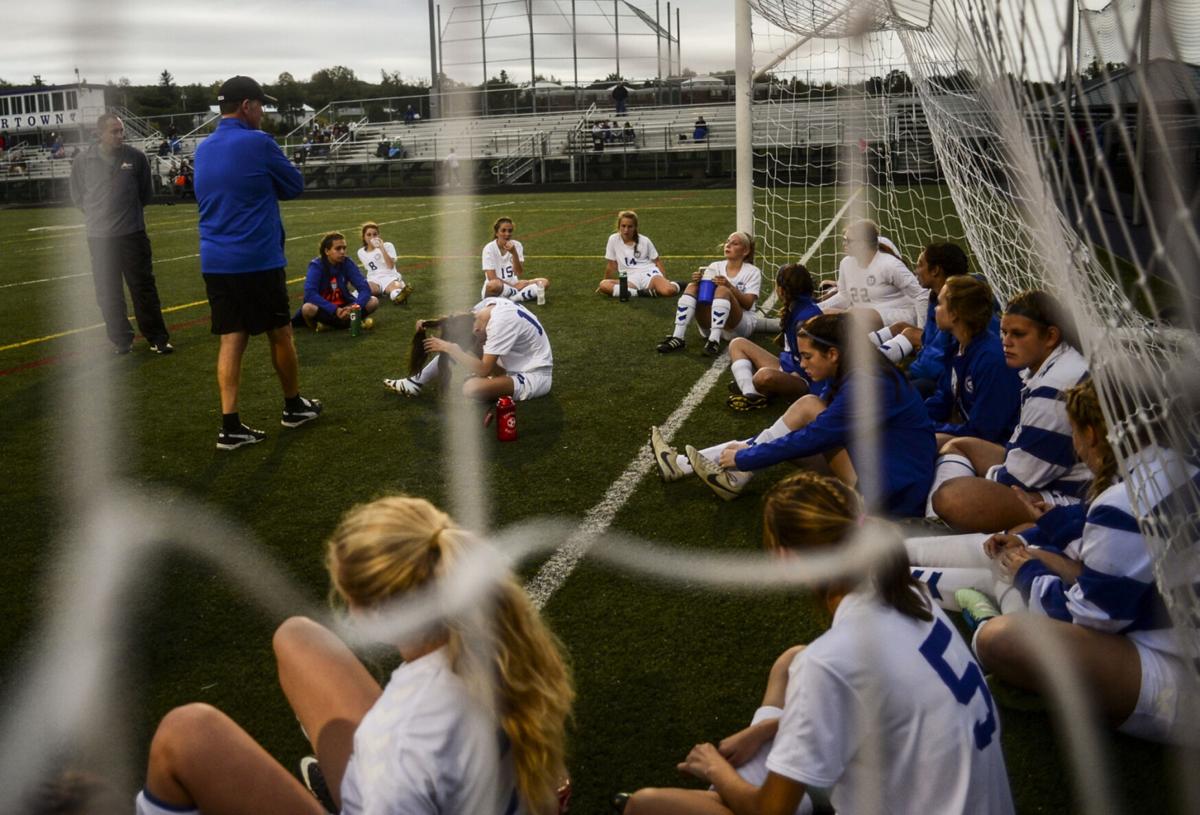 Kurt Robbins, coach of of Immaculate Heart Central’s girls soccer team, talks with his team during halftime of a game against Carthage in 2017. Watertown Daily times 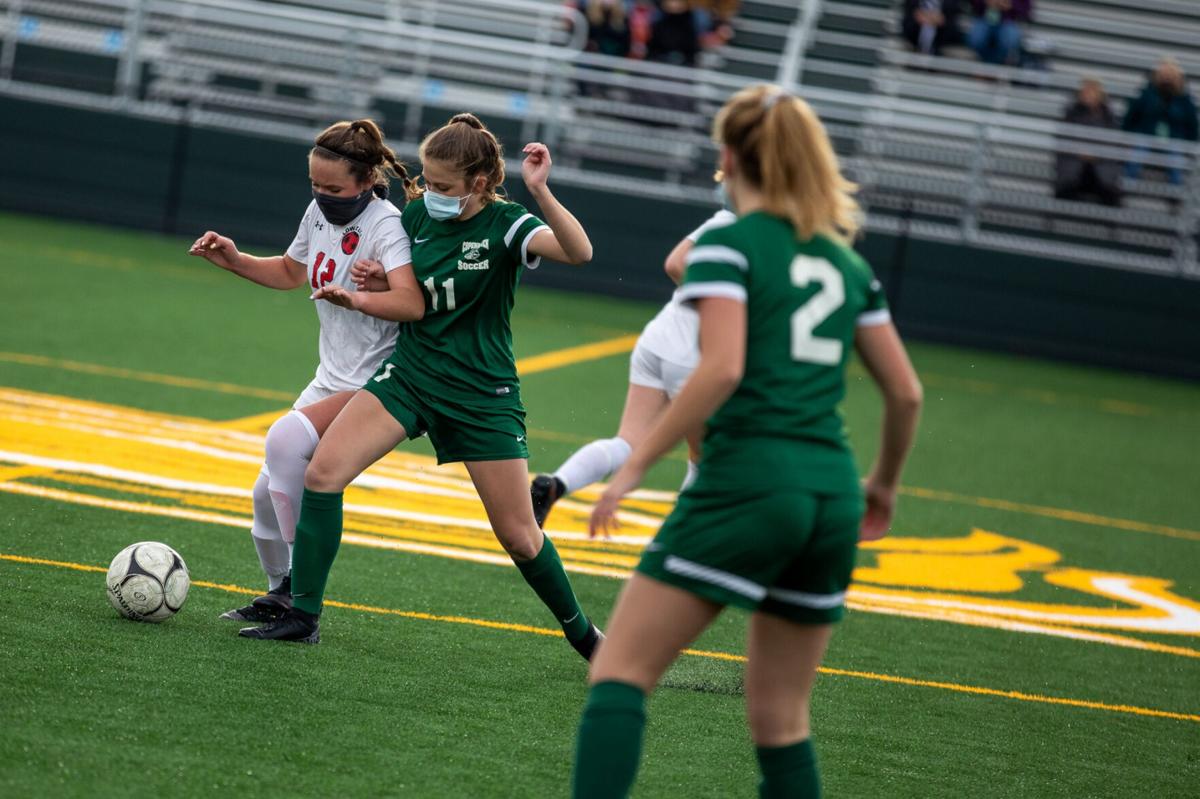 Copenhagen’s Chase Nevills, middle, attempts to advance the ball against Beaver River during the first half of a boys soccer game in October in Copenhagen. Kara Dry/Watertown Daily Times

General Brown’s David Jenner fires the ball into the net during a team practice in the 2019 season. Watertown Daily Times

Kurt Robbins, coach of of Immaculate Heart Central’s girls soccer team, talks with his team during halftime of a game against Carthage in 2017. Watertown Daily times

The athletic facilities at General Brown were a buzz of activity on Tuesday afternoon as athletes prepared for the start of Fall Season II.

While the Lions’ boys soccer team readied for its first scrimmage of the season on the turf field, with a girls soccer scrimmage to follow later in the afternoon, a football player charged past, clad in his helmet and pads on his way to practice.

Also, on the courts beyond, the tennis team practiced, as each squad took advantage of temperatures nearing 70 degrees to begin making up for a lost season, after fall high school sports in Jefferson County were canceled last year because of coronavirus pandemic precautions.

“It’s great, maybe the soccer gods are looking down on us with this weather and a chance to kind of get started,” Indian River boys soccer coach Fred LaVancha said before Tuesday’s scrimmage at General Brown. “Everybody is very excited about it, players, coaches, our community, so it’s very good.”

General Brown will open its season in boys soccer when it hosts Carthage at 5 p.m. today, which will mark the return of varsity soccer among the Frontier League’s Jefferson County teams. Also today, Indian River will play at Carthage at 5:30 p.m. to kick off the girls soccer season.

“There’s a lot of people to thank,” General Brown boys soccer coach Phil Jenner said. “The section, the Frontier League, the superintendents, with them getting together and even letting us a chance to play. We hope we can make the most of it, because we didn’t get to play in the fall, so now playing this time of year, we’re hoping to have a five- or six-week season.”

The season, which is scheduled to run through late April, will not include league play, league playoffs or sectional play. But players, such as General Brown’s Eric Randall, are just happy to have some kind of season.

“It’s exciting to finally get back to playing, I’m excited to see how we can do as a team,” said Randall, a junior midfielder and co-captain. “(Last fall) was tough, having that taken away from us.”

“It feels great to be out here,” David Jenner, a senior midfielder and co-captain with General Brown’s boys soccer team, said before the scrimmage. “Just to get this opportunity in my senior year means the world to me. I feel like it’s a blessing.”

Prior to having its season canceled back in September, General Brown was perfect in the Frontier League in 2019 at 12-0, finishing 14-2-1 overall.

“We’re a very young team, we knew that coming in and sadly we had some players who decided they didn’t want to play this year,” David Jenner said of this year’s team. “But it’s high school sports and you’ve got to be able to adjust to your team and be able to come out victorious. I think it will be a good challenge for all these young guys coming up.”

There will be 10 teams participating in boys soccer, 12 in girls soccer, with both playing in two groups.

In the boys’ ranks, Carthage, Indian River, Watertown, General Brown and South Jefferson will compete in one group, with Belleville Henderson, Copenhagen, LaFargeville, Sackets Harbor and Thousand Islands in another group.

The setup is the same among the girls soccer teams, except with Immaculate Heart Central competing in the first group and Sandy Creek, located in Onondaga County, playing in the next group.

The format gives teams like General Brown’s boys the opportunity to play eight games within its group and the team also added a game against Belleville Henderson to its schedule.

“It’s a competitive schedule, that’s what we have,” Phil Jenner said. “And we’re looking forward to having a season and getting closure for our seniors and an opportunity for some younger players to play.”

“Honestly in my opinion, this is way better than having no season,” said senior forward/midfielder Izeigha Collins, also a co-captain for General Brown. “I’m just glad I’m out here again, playing for one last year. We’ll make the best of it.”

Schools such as Belleville Henderson, LaFargeville, Sackets Harbor and Sandy Creek, who all play on grass fields, currently have only partial schedules because of field availability.

Belleville Henderson’s boys team, which went 14-0 in the league in 2019, has seven games scheduled, beginning with a game at Thousand Islands next Wednesday, and with its first home games slated to be played April 21 and 23.

Copenhagen, which competed in soccer last fall as Lewis County schools were cleared to play sports, debuted its new turf field last October. Both Golden Knights soccer teams played four games before fall sports in the county were halted because of COVID-19 protocols.

As of Wednesday, the Golden Knights’ boys team had four games scheduled, all at home, while the girls team was slated to play five games, with four at home.

Both the Indian River boys and girls soccer teams have been practicing since the first week of the month, about a week longer than most teams.

“It’s been a long time since we had a fall without sports,” LaVancha said. “But there was so much going on, your emotions were caught up in bigger things than sports at the time, but reflecting back, kind of getting out there and seeing the seniors that we hadn’t seen really tells you what we were missing. It’s great to see that with their energy and they’re happy to be out there. We probably would have missed it a lot more than we would have known if we didn’t get a chance to get out here and get together a little bit.”

Squads such as South Jefferson’s girls soccer team has close to a full slate with nine games currently scheduled.

“The way I look at it, I don’t know if we’re going to get 10 games,” South Jefferson girls soccer coach Terry Burgess said. “But you know what, if you only get four or five games, I think you’ve got to be happy you got some in there. And it’s kind of like you’re playing for nothing in the sense of not playing for a championship or anything like that. I’m sure some schools will look at it like you want to win every game and others schools may look at it and say ‘this is kind of a real preseason for the fall.’ To give kids some time and give them some experience and kind of like have your spring training in baseball.”

The Spartans will get a chance to play on the school’s new turf field for the first time when they host Watertown at noon Saturday.

“It will be a strange season because I think we have to work around a lot of things,” Burgess said. “We have to be very accommodating, I’ve got girls who are working because they didn’t have sports, so we have to be somewhat understanding if they’re working and sometimes they’re going to have to miss practice because of it and we’ll have to be OK with that.”

This week’s weather is forecast to cool off by the weekend with temperatures back into the high 40s by Saturday.

But soccer players are accustomed to playing in all kinds of conditions, usually culminating with cool weather by postseason time in the fall.

“I think temperatures in the 40s are doable and if it’s too cold outside, you can always go inside,” Burgess said of holding practices. “Especially like this time of the year when 40 feels good, 40 in the fall feels cold, but right now when you’re used to the cold, 40 feels good. But we’re going to try and be outside as much as we can and hopefully that works out for us.”

Fall Season II will overlap the start of spring sports season by about a week, then some players attention can turn to sports such as lacrosse, which will be played into June and which will include sectional playoffs.

“We’re just going to get the kids out there and let them play a little bit,” said IHC girls soccer coach Kurt Robbins, whose team will open its season at General Brown on Tuesday. “I mean lacrosse got screwed out of a whole year, so we’ll get, four or five or six games and then let them go to lacrosse and then we’ll be back in three months playing soccer anyway. This will be good just to give the kids a little normalcy.”

La Vancha, who is in his 14th season of coaching the boys soccer team at Indian River, added:

“When you walk out onto our complex at Indian River and you’ve got the varsity football team and you have multiple soccer teams out there, it’s the biggest sense of normalcy that I have felt in a year,” he said. “It really feels like we’re winning something and it’s beyond winning a soccer game, it’s bigger than that. But it does feel like you’re breathing fresh air and whether that’s literal or figurative I don’t know, but that’s a sense you get for sure.”