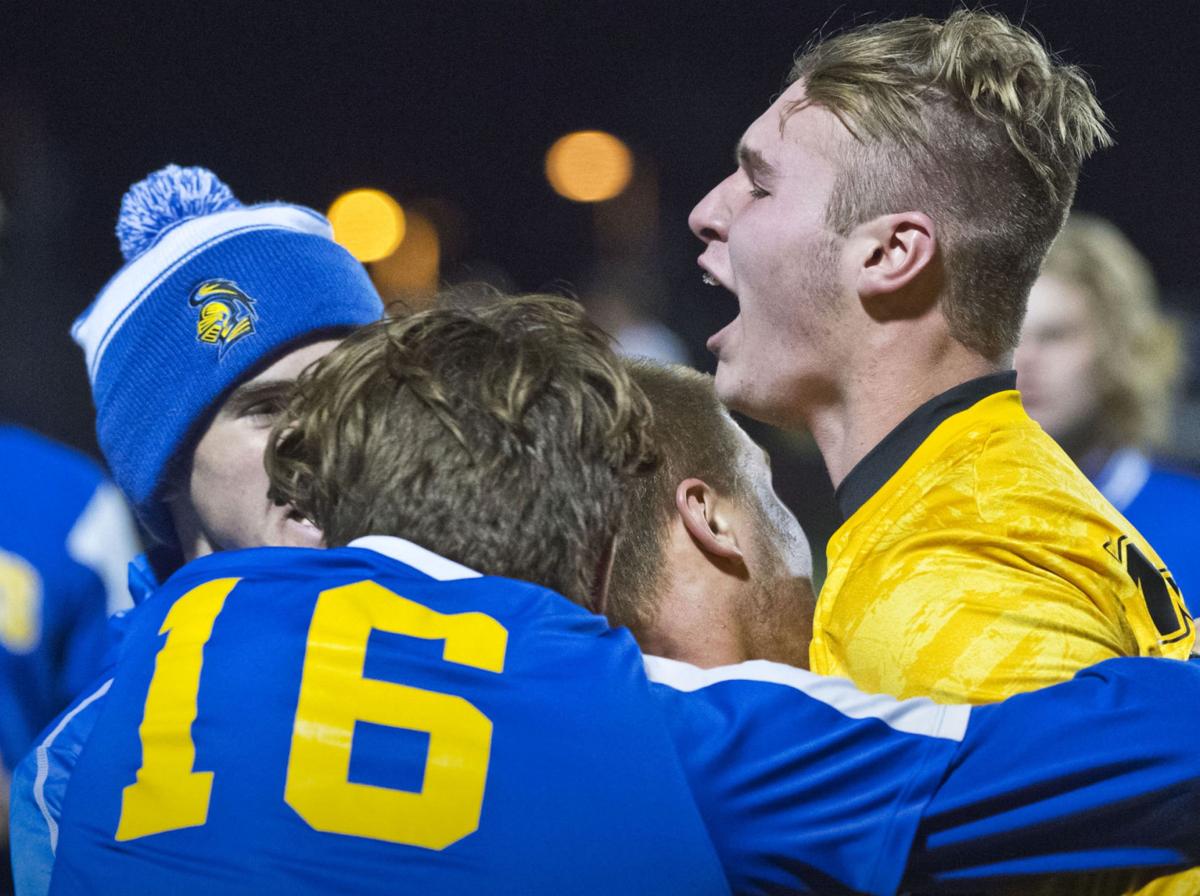 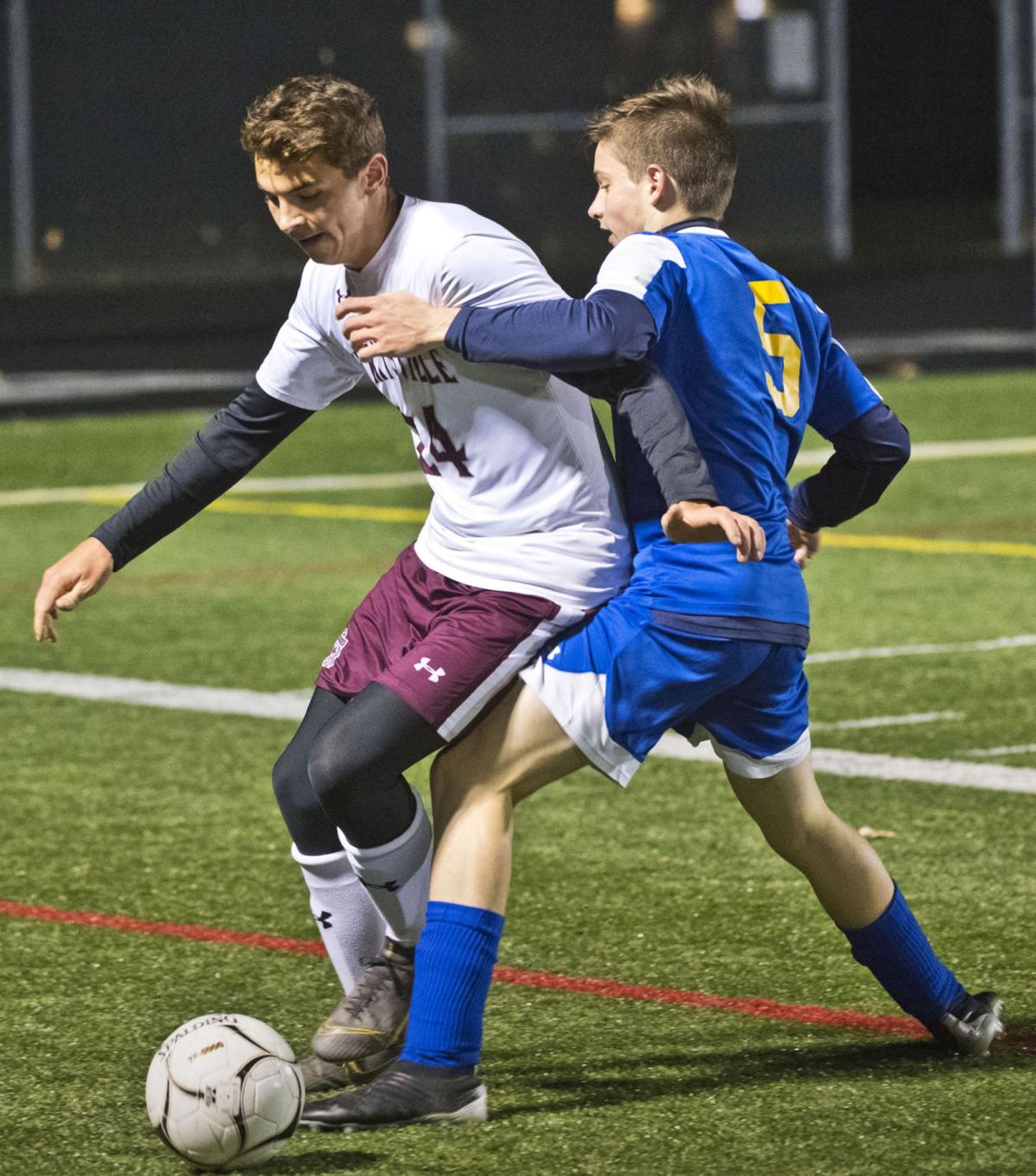 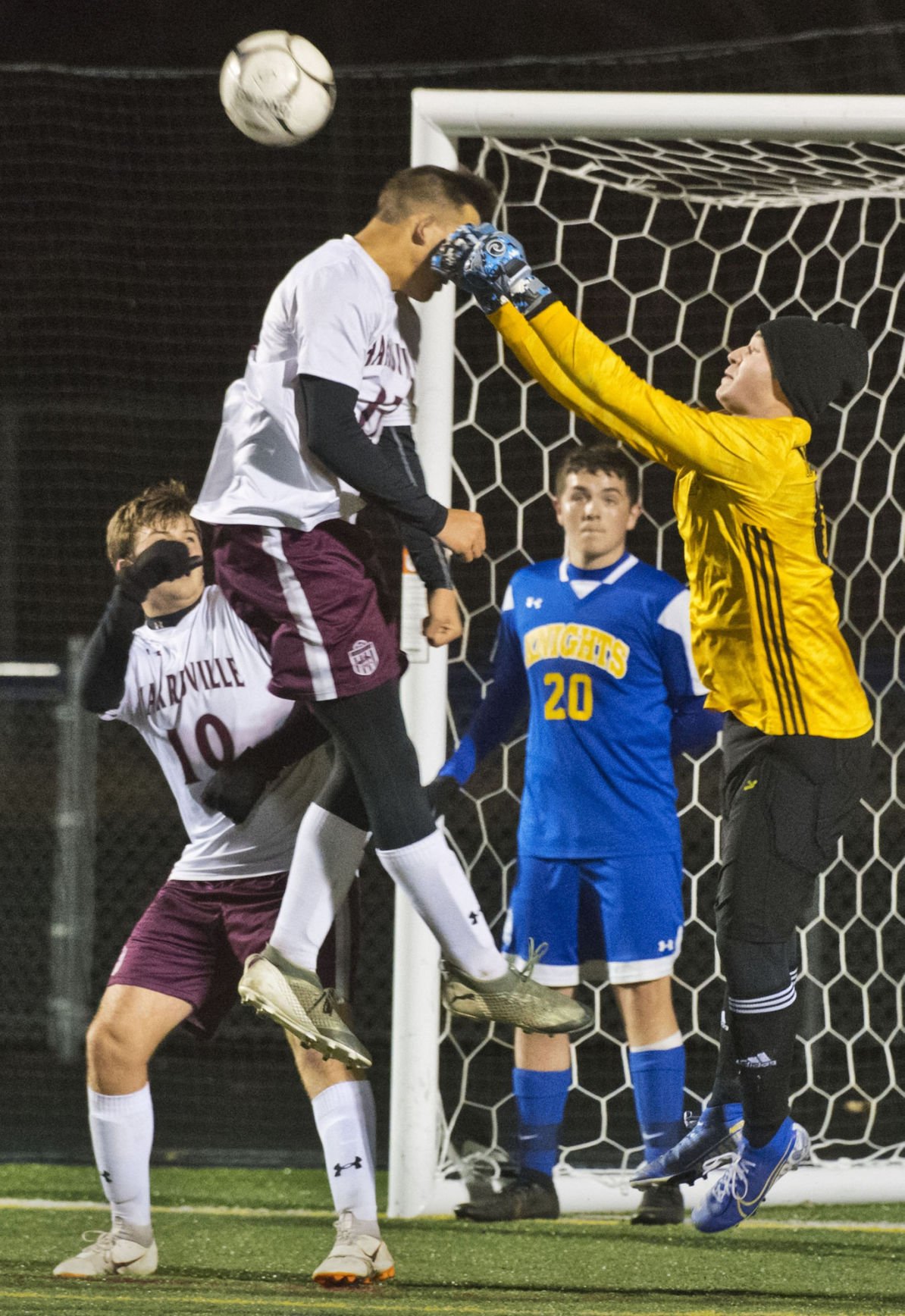 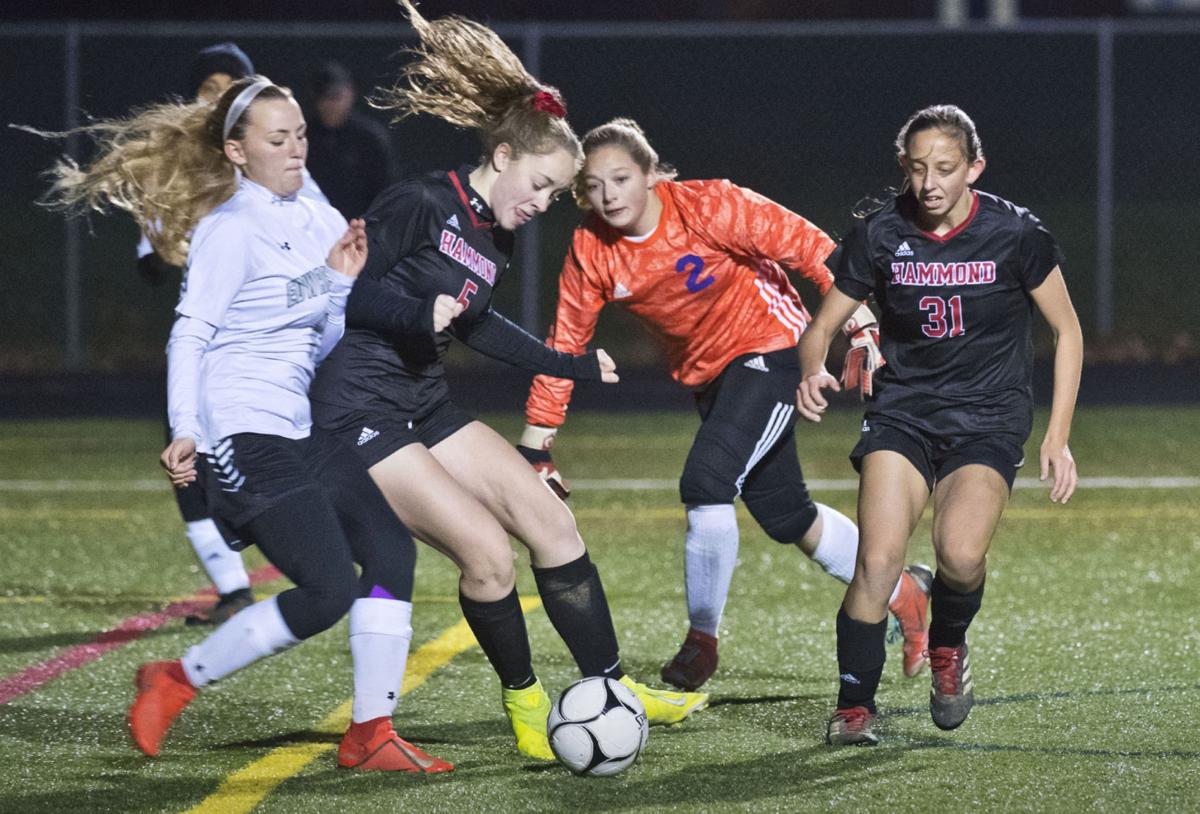 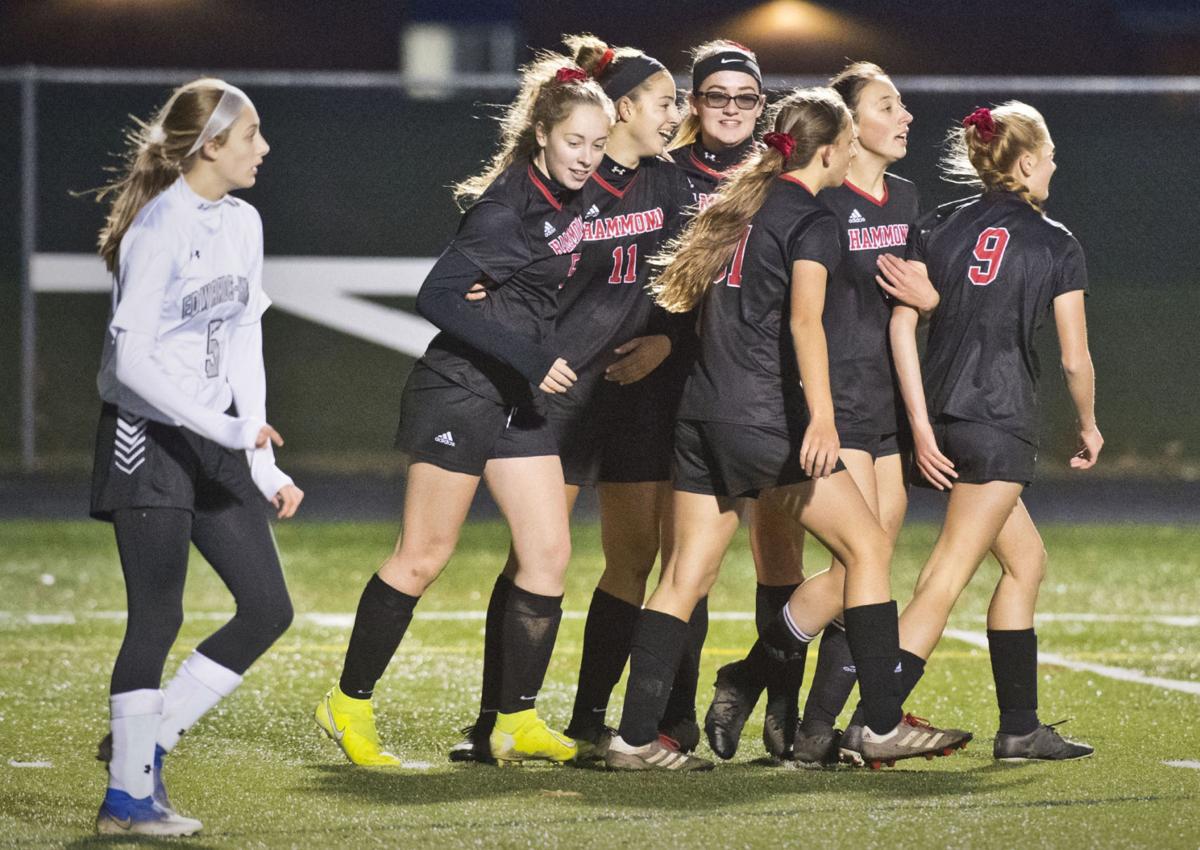 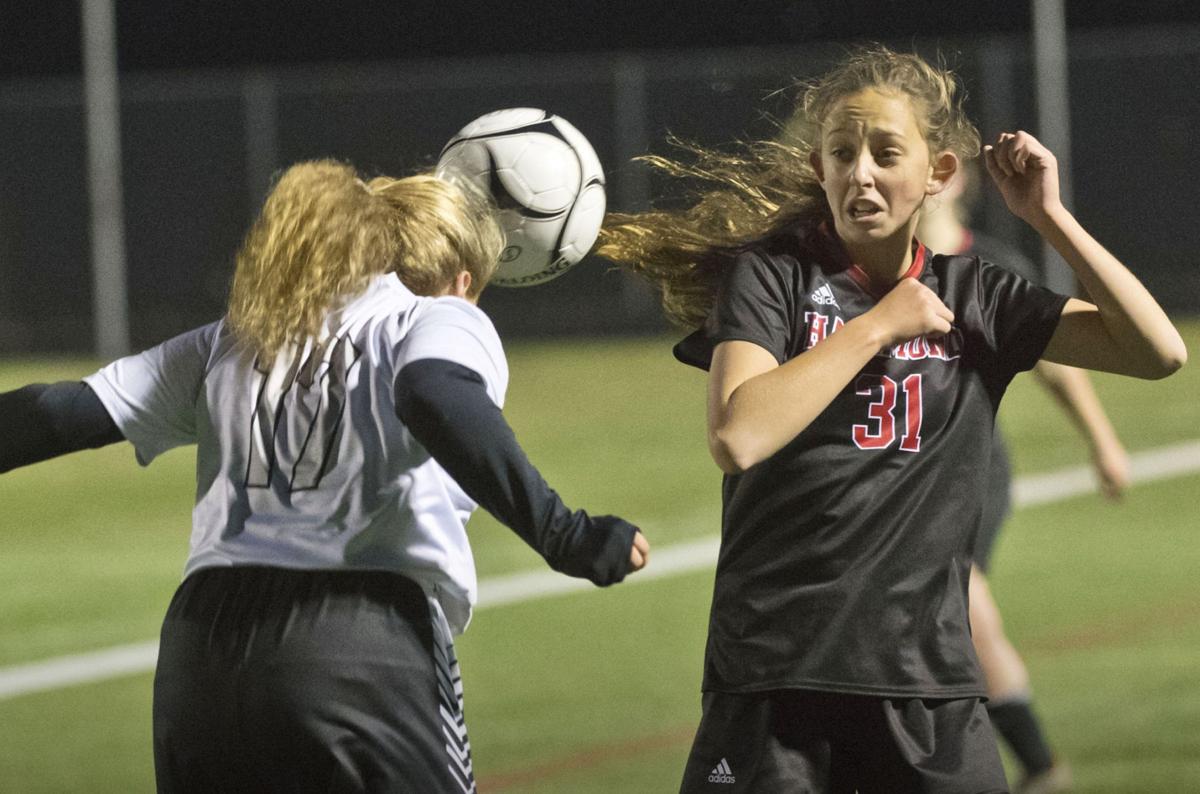 Hammond’s girls scored twice in the first 11 minutes and went on to defeat No. 3 Edwards-Knox 2-0 in the first game of the doubleheader. Lisbon (18-0 overall) continued an undefeated season with a goal in the 17th minute to beat No. 3 Harrisville 1-0 in the boys championship game.

Both teams will be travel to Beekmantown this weekend for first-round state playoff games Saturday. Hammond (18-1) faces Chazy in a girls game at 1 p.m. and Lisbon plays Chazy’s boys team at 11 a.m.

Twenty four years ago Lisbon produced an undefeated season through the Section 10 playoffs, with only an early-season tie as a blemish before eventually losing in the first round of the state playoffs.

This year’s squad has surpassed the 1995 team in that it did not post even a tie game as it advanced with the shut out of the Pirates (13-5-1).

Current Lisbon head coach Dickie Marcellus and assistant coach John McBath both played on that 1995 squad. McBath’s son, Hayden, was one of Lisbon’s leaders Tuesday, stopping four shots as the goalie for Lisbon’s 13th shutout this season, a school record.

The current version of the Golden Knights has been more dominant than their 1995 counterparts, even though that team entered the state playoffs ranked No. 1 in the state. This year Lisbon has outscored the opposition 65-6.

“It’s a whole lot more stressful coaching it than it was playing,” Marcellus said when comparing the team he played for then and the team he coaches now. “They are great. They have speed, senior leadership. We played good soccer and we kind of held on today. These guys have worked hard all year for this.”

Lisbon played two close games with the Pirates earlier this season, winning 1-0 on Sept. 17 and then edging Harrisville 2-1 in overtime on Oct. 9.

The Golden Knights were able to relax, a little, when Jackson LaRock, who wears No. 3 just like Marcellus used to, scored on a rebound of a shot from Gregory Wood from about 40 yards out, in the 17th minute for what turned out to be the only goal of the game.

“It just bounced through and I just put it away,” LaRock said. “It was nerve-wracking at first. As soon as I saw the open net it was nerve-wracking. I kept my composure and finished. It was very important. If we had let them score first, it would be very tough to come back because they’d pack the box.”

McBath played an aggressive game in the net, often coming far out to meet the ball before the Pirates could get to chances.

“This team, we’ve been pushing for it a long time,” McBath said. “I’m really happy for us and I hope we can just keep it going. I’ve been proud of this team from day one. We’ve earned this. Our defense has been stellar all year. We play really well.”

“We had a great year,” Bearor said. “I thought in the very beginning they had the wind and they put the ball on the ground and they moved the ball well and we couldn’t clear it. We could never get a counter attack going. In the second half I thought we did. It was just a great game.”

The Red Devils entered the championship game outscoring the opposition 80-22 and when they scored two quick goals early in the first half they appeared on their way to another blowout win. In two games against Edwards-Knox (11-5-1), Hammond had outscored the Cougars 12-4.

“We told our defense that they had to squeeze together better and talk back there and play as a unit,” Cougars coach Patty Taylor said. “In the second half we seemed to step up better.”

Both of Hammond’s goals were scored by senior Kelsey Bennett, one off a pass from Avery Kenyon in the 11th minute and another unassisted in the 13th.

Bennett said the first goal she kind of directed from the side of her leg, knocking it in off her shin pad from a good pass from Kenyon.

“I was hoping (Bennett) was there,” Kenyon said. “She’s always there.”

Said Bennett, “We are good when we score goals quick. Every time we don’t score in the first half, we don’t play good. Scoring quick gives us a lot of motivation.”

Alvyia Crosby finished with four saves for the shutout as the Red Devils returned to the state playoffs for the first time since 2016.

“We started off the way we wanted to, that’s what we want to do, start fast and start quick,” Hammond coach Shawn Dack said. “We are both very familiar with each other and Edwards-Knox has two very dynamic players in (Abby Hart and Lucy Frary). We wanted to make sure we knew where they were and what they were doing.”

Section 2’s Schalmont scored two goals in each half to defeat Canton (9-5-5) in a first-round game of the state Class B playoffs at Lansingburgh High School.

The Huskies (8-8-2) ran into a powerful opponent in a state first-round Class A game at Lansingburgh High School, falling to Section 2’s Mohonasen (20-0).

Mohonasen has outscored its opponents 156-3 this season and Liv Raucci, who has scored 43 goals, picked up another four against the Huskies.