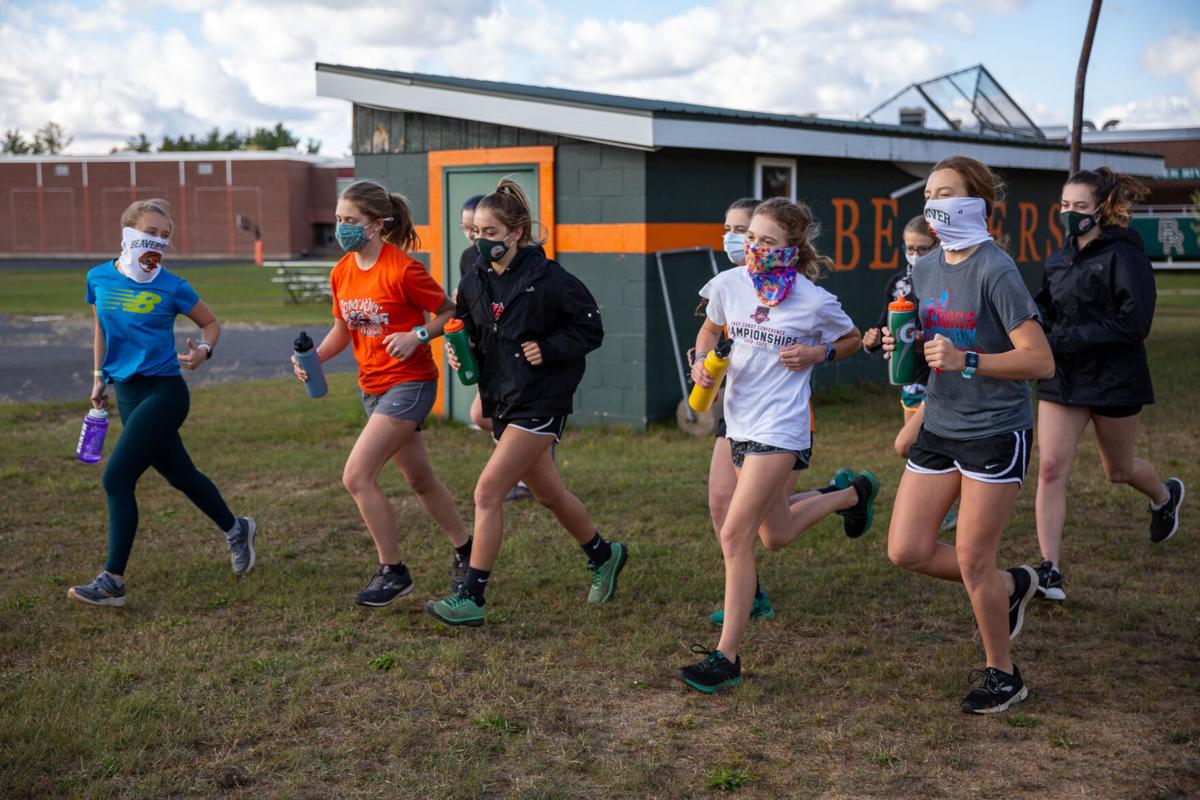 The girls cross country team jogs to the Alumni Park running trails behind the school for a speed practice a couple of weeks ago at Beaver River Central School in Beaver Falls. Kara Dry/Watertown Daily Times 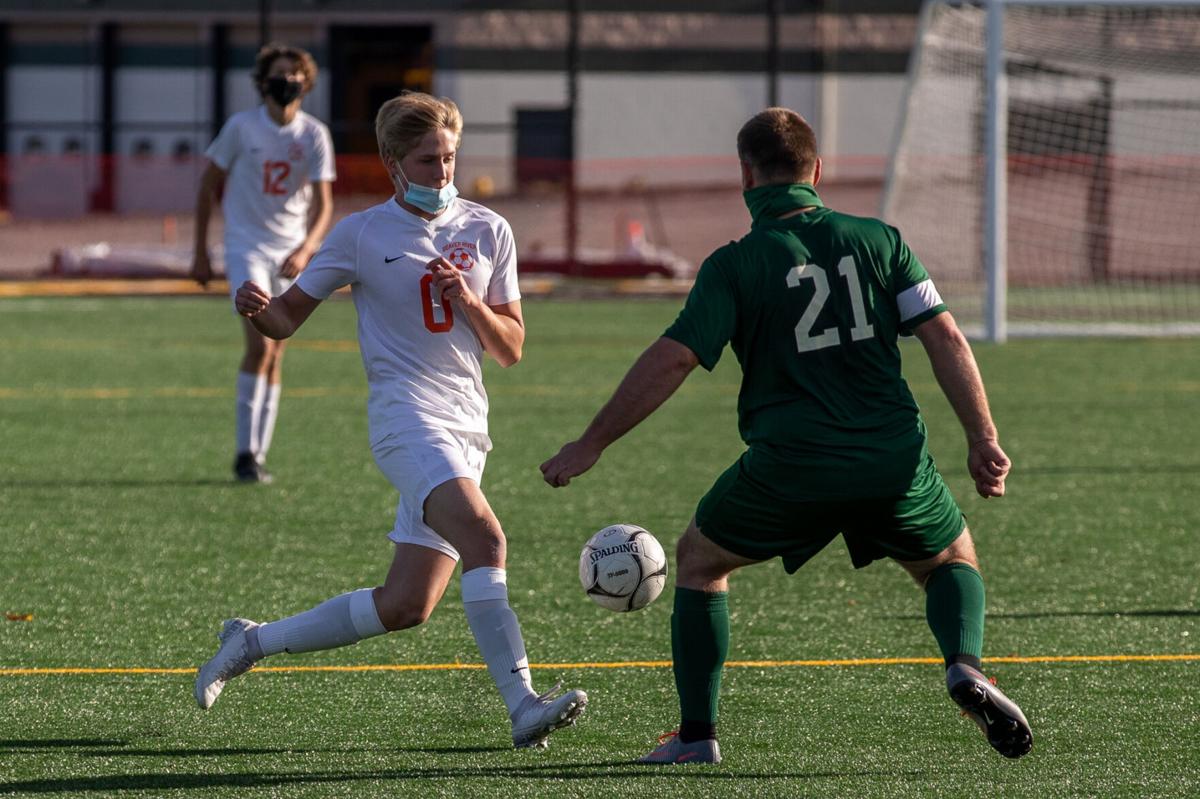 The girls cross country team jogs to the Alumni Park running trails behind the school for a speed practice a couple of weeks ago at Beaver River Central School in Beaver Falls. Kara Dry/Watertown Daily Times

In the wake of the district announcing Friday it will go to remote learning for the next two weeks because of positive COVID-19 cases, the school said later it has canceled the remainder of its fall sports.

“With that decision, we have all students in mind, so we can’t have students together,” Beaver River Central School superintendent Todd Green said. “We’re going remote, so that means we can’t have sports, there’s really no other way to put it.”

“We’re done for the season, because if you take two weeks off, you can’t come back,” Beaver River athletic director Wanda Joslin said. “It’s like starting over with the training again. And our season was going to end next week, possibly, anyway.”

As of Friday, 22 varsity athletes from Beaver River are among the approximately 100 students who are now quarantined for two weeks, the school announced Thursday after one of its students and a staff member tested positive for COVID-19.

“The end of this quarantine is beyond the end of all the sports seasons,” Green said. “But I would say we are blessed to be able to have what we had at this point, athletes were able to work on their skills and development.”

“I’ve talked to some athletes today, they are disappointed, but they are thankful for what they’ve got, so far,” Joslin said.

Both the boys and girls soccer teams had played four games, with the boys team’s season canceled Thursday.

“(Thursday) was pretty somber, at least for me, when we found out,” Beaver River boys soccer coach Brian Zehr said. “We got a list of guys that were headed to be quarantined and we just don’t have the numbers to support a team when something like that happens.”

The girls soccer team was to continue its season by calling up players from the junior varsity team, the school said Thursday, but then its season was canceled.

The school’s girls tennis team managed to play three matches this month while the girls swimming team was scheduled to begin its season Tuesday.

“You hate to see it go down like this,” Zehr said. “I keep going back to these older kids and going back when I was a senior in high school, I can’t imagine losing my senior season like this. But I do feel fortunate for the games we have been able to play, the practices we were able to share.”

Beaver River’s boys and girls soccer teams participated in a condensed season as the Frontier League campaign included just the four schools from Lewis County after schools from Jefferson County, as well as Sandy Creek, Oswego County, decided not to participate in fall sports.

“Understandably, that’s the reason why we set up the league the way we did this year with having senior nights being the first game at home,” Zehr said. “It definitely wasn’t a decision that we wanted to make, but we had to make, and again, it wasn’t made lightly. I do think we did the right thing, especially with seeing what happened (Friday), when the decision was made for everyone to close down and shut it all down here at Beaver River, anyway, it seems like that’s the right decision based on what’s going on.

“But it doesn’t make it sting any less, though, especially with these older guys, this was their last shot.”

The Beavers’ boys team went 0-3-1 in its first season under Zehr, a campaign that began Oct. 14.

“Everyone was pretty disappointed, especially with the way we were headed as a team,” said Zehr, whose team was cleared to practice Sept. 21. “We had a month of soccer, and it takes a while to get kind of gelled together as a team and we just started to get that. And so to have it kind of be canceled like that, we were just starting to see the potential that we had as a team together.”

Beaver River’s girls soccer team fared 1-1-2, which included a win against South Lewis and a pair of ties against Copenhagen.

“A great group of kids,” Green said of the school’s fall sports teams. “I don’t think there were many complaints about the way we had to do sports this year with the masks and only playing the teams close by. Which actually was pretty neat, because these kids that are not only sort of rivals between schools, but are also friends between each other and their relatives are playing against each other, it’s kind of been an interesting season from that perspective.”

On Friday, the boys and girls soccer games scheduled between Lowville and Copenhagen, as well as the tennis match between the two schools were all postponed in a precautionary move in light of the Beaver River virus cases.

“Given the cluster of cases in Lewis County over the past several days, the district wanted to pause athletics for a few days in order to allow public health to hopefully complete their contract tracing and get a handle on how big the cluster actually is,” Lowville boys soccer coach Nick Matuszczak said Friday in a text.

If all goes well, those teams will be able to compete next week, Matuszczak said.

Copenhagen, Lowville and South Lewis all hope to continue their fall sports schedules next week, with soccer finishing Friday.

“I think it was a huge opportunity for Lewis County.” Zehr said of the season. “And I think we did it the right way, the thing is I think everybody followed the rules, everybody did what we were supposed to do and just circumstances dictated that we couldn’t continue it.”

Beaver River will be moving all grade levels to a remote learning model for two weeks beginning Monday. All extra-curricular activities have been canceled for the time being, according to the district.

“I told them ‘this is a drop in the bucket compared to the future that you guys have,’” added Zehr, who teaches sixth-grade social studies at Beaver River. “It’s just something that we’ve got to get through and I don’t want our season to be defined by this cancellation. Our season is going to be defined, at least by me and my team as a group of young men getting together and becoming a team.”

The remote learning model at Beaver River will continue through Friday, Nov. 6.

“We were really looking forward to the competition that was coming up in the different sports, so it’s pretty sad that it fell through,” Green said. “But we know it’s the right choice because of what’s happening in our community, what’s happening with needing to quarantine some of these students. So, you’ve got to make tough decisions sometimes.”