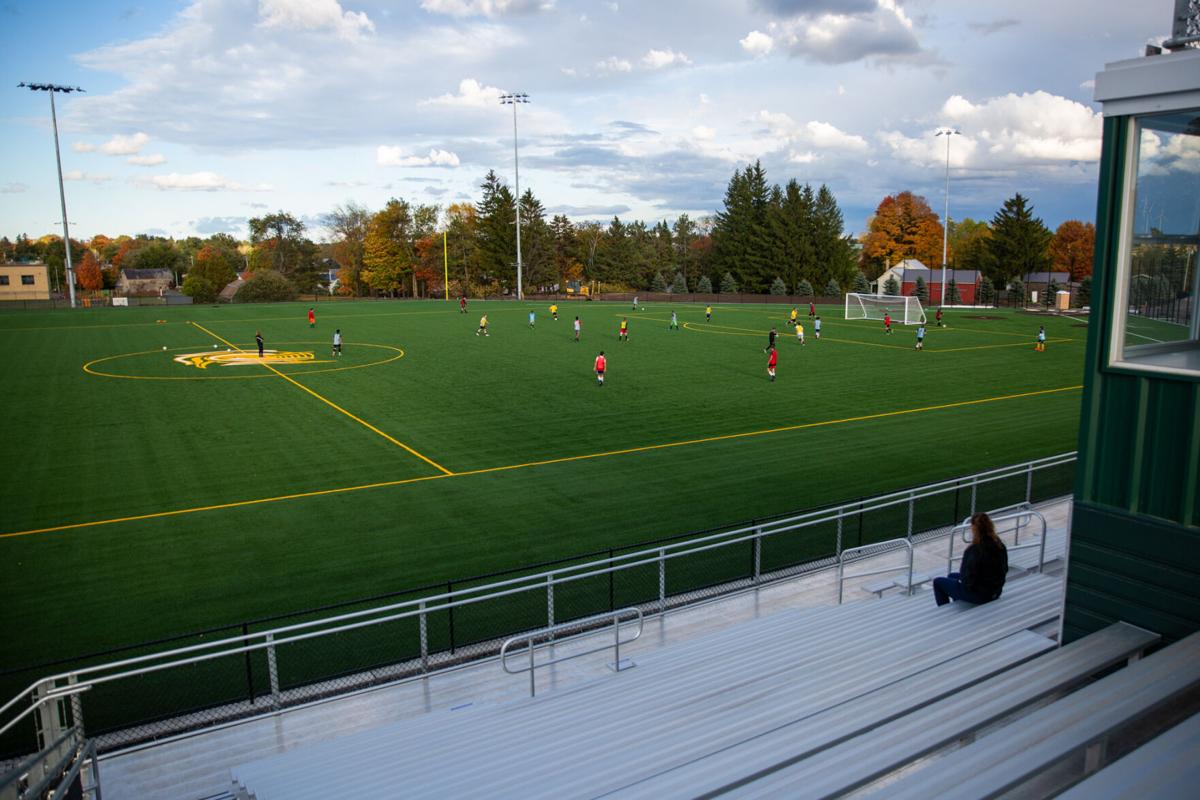 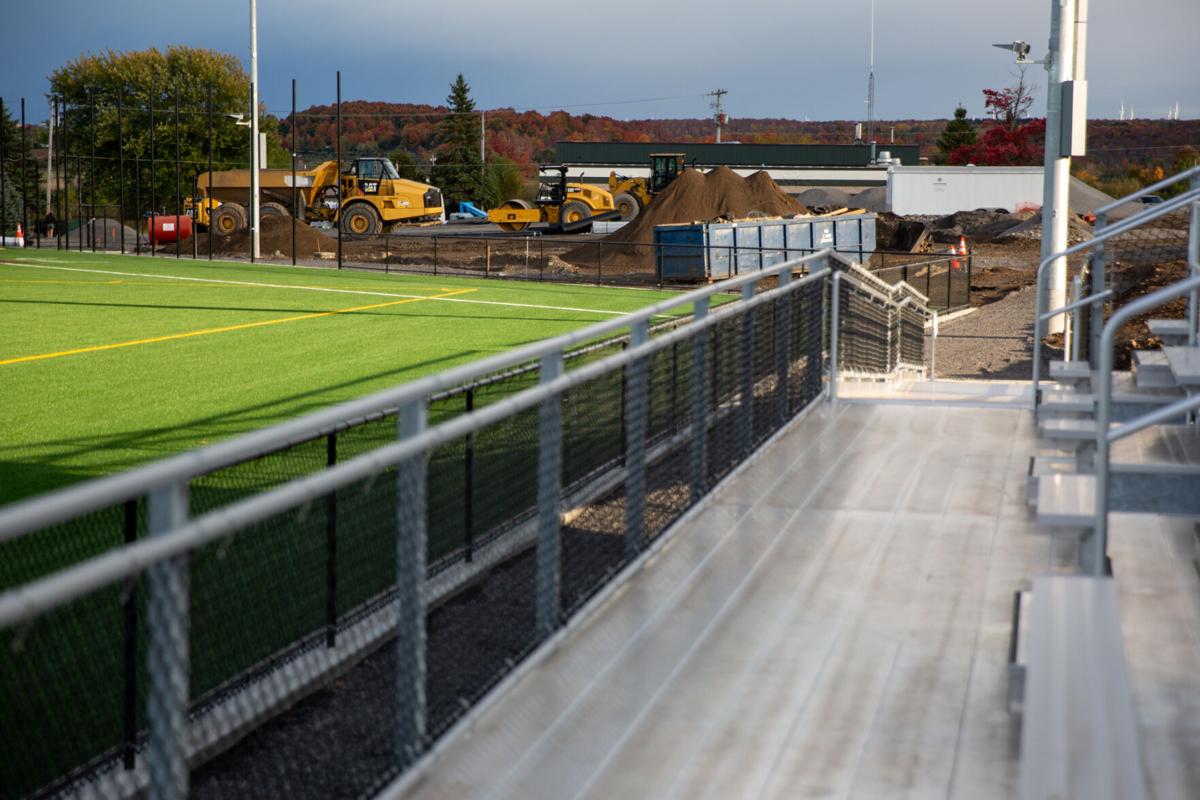 A look at the new turf field at Copenhagen from the newly installed bleachers. The facility includes a soccer field, as well as baseball and softball turf fields. Kara Dry/Watertown Daily Times 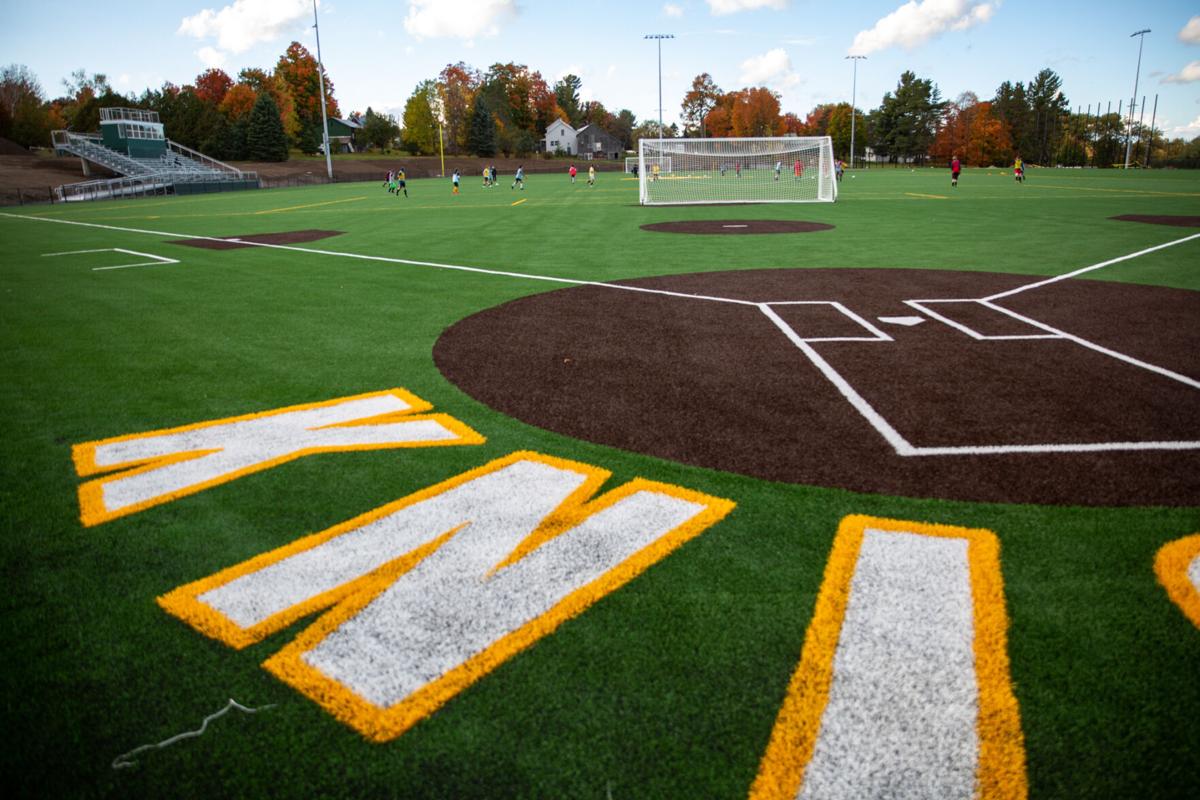 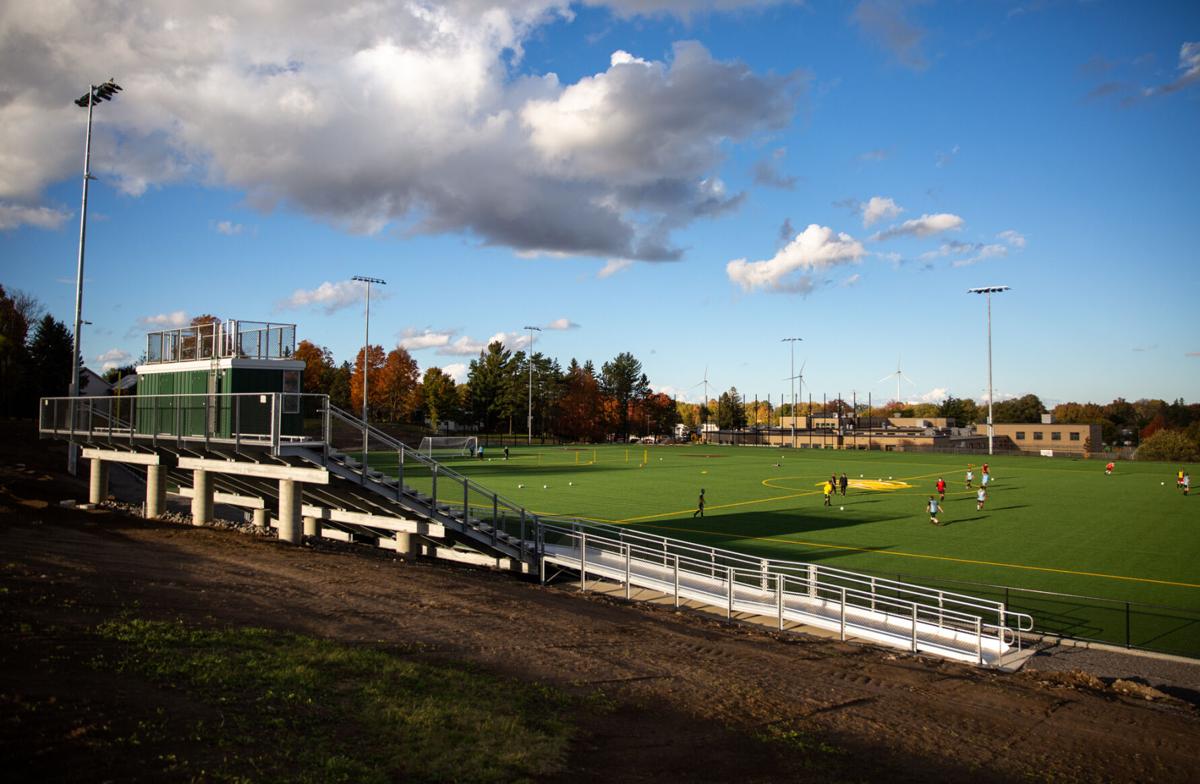 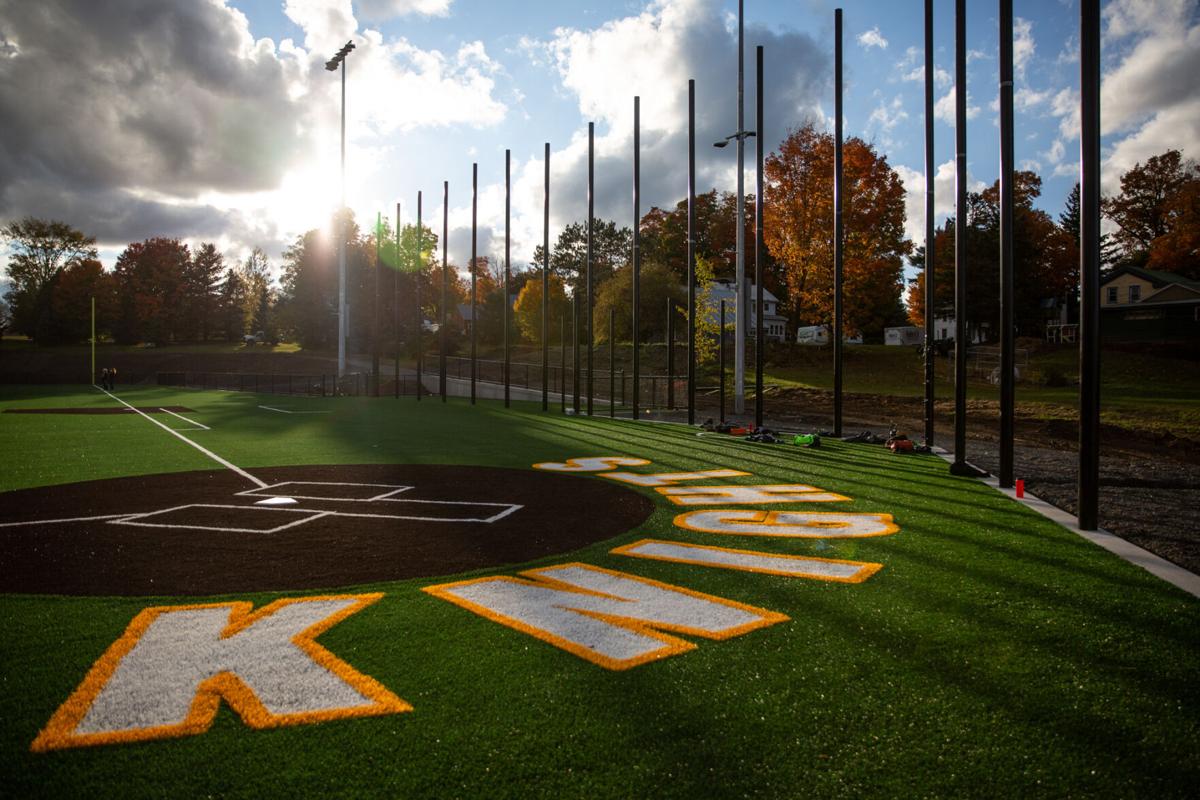 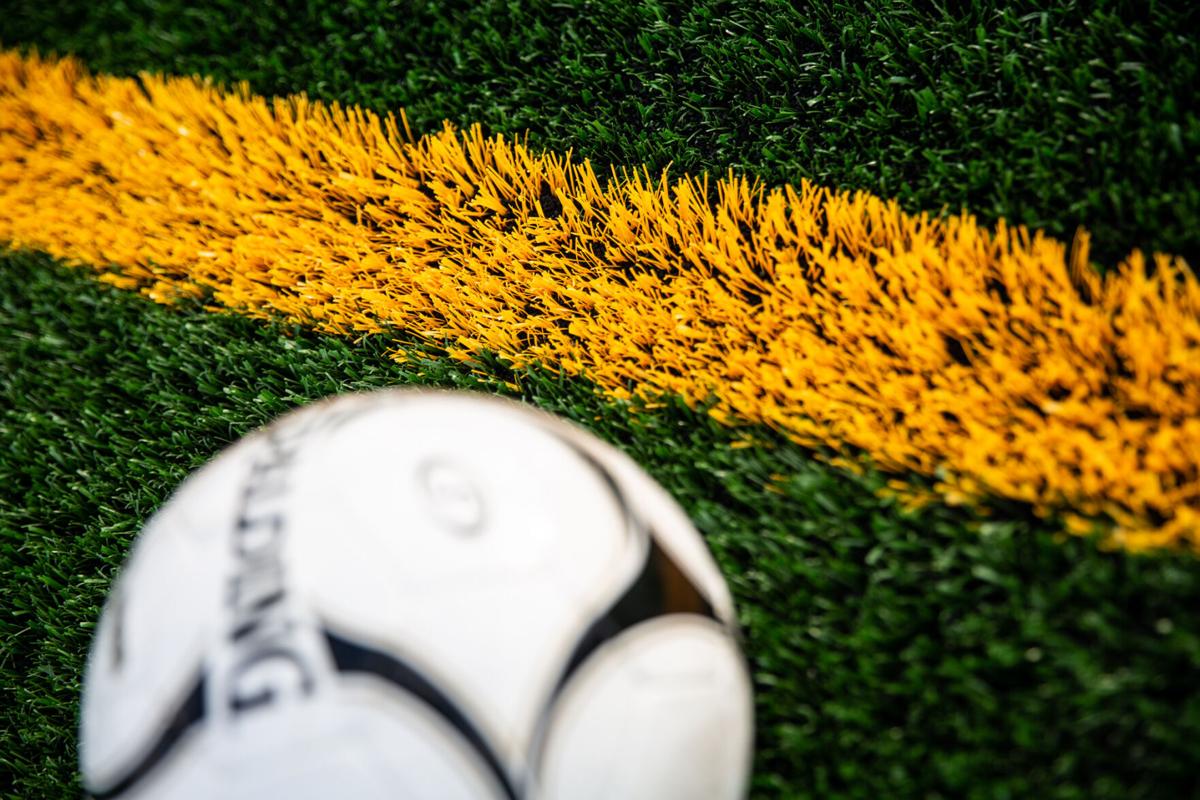 Copenhagen, Lowville and South Lewis plan to live stream their soccer games this fall as spectators are under a “two-per-player” limit. Kara Dry/Watertown Daily Times

A look at the new turf field at Copenhagen from the newly installed bleachers. The facility includes a soccer field, as well as baseball and softball turf fields. Kara Dry/Watertown Daily Times

Copenhagen, Lowville and South Lewis plan to live stream their soccer games this fall as spectators are under a “two-per-player” limit. Kara Dry/Watertown Daily Times

COPENHAGEN — A tradition in Copenhagen over the years has been playing soccer on what is known as The Hill, an endeavor that has yielded much success.

Now this locale, which includes two traditional grass fields on two different levels overlooking the school, has been transformed.

The old playing field has been replaced with a turf field, on which soccer, baseball and softball can be played.

“Back in the day, you never would think Copenhagen would have a field this nice,” Copenhagen boys soccer coach Logan Spaulding said. “But we’ve always said ‘why not us?’”

“It’s awesome,” said senior Cody Powis of the boys soccer team. “The only turf we’ve really been on has been Lowville’s and that’s been for sectional games and those are out of conference. So to have this as our home field, it’s pretty amazing, it’s a great opportunity though we only have it for one year for us seniors, but it’s still better then nothing.”

The newly installed facility has a stadium feel with another first at the school — lights for night games — as well as one section of bleachers and a press box, with a pair of scoreboards still to come.

“I think it’s really exciting,” said senior Brooke Smykla of the girls soccer team. “I know we won’t have as much of a spectator section this year, but I’m really grateful that we even got to have a season.”

The middle of the new soccer playing surface is emblazoned with a Golden Knights logo and the soccer field appears to be wider than the old site.

“It’s pretty neat,” senior Meaghen Fitzpatrick of the girls team said. “It’s really cool because it feels so much bigger and it’s so newer. It seems like almost professional.”

Both teams began practicing on the turf this week, and the boys team will christen the turf in its season opener when it hosts Beaver River at 6:30 p.m. Oct. 14.

The two teams first practiced on the field Tuesday in the rain, but many players didn’t mind the conditions.

By Thursday afternoon, the rain had cleared out, with the sun making an appearance for both practices.

“It was rough, we hadn’t played or touched a ball since March,” Charity Smykla said. “No club soccer, we didn’t do any camps, we stayed away from everything. So we followed all the rules and just hoped for the best — and when the news came out that we were playing, the kids were ecstatic, I was happy.

“The season doesn’t look the same, but it’s a season — and we’re so fortunate to have any season and be able to get on this field — and put their footprints on it for the first time.”

The New York State Public High School Athletic Association allowed soccer to be played this fall and Section 3 gave the green light. But Frontier League schools in Jefferson County as well as one in Oswego County, Sandy Creek, decided to postpone their fall sports until spring.

“Getting out here is awesome,” Copenhagen senior Shareef Stokley said. “We’re trying to be as safe as we can, but we’re still trying to have fun with it. Even though we’re playing only three teams, we’re still playing.”

After opening its season Oct. 14 at Beaver River, the Copenhagen girls will hold their home opener two days later at 6:30 p.m. against Lowville on the Golden Knights’ senior night.

“It’s special for the kids, it makes them feel like so much was taken from them, but they have this to look forward to every night,” Charity Smykla said. “So we’re lucky, they’re in school five days a week, so it’s very normal for them.”

The new facility replaces a grass field that was problematic under poor weather conditions, particularly later on in soccer seasons.

“The new field is beyond anything I could have imagined,” said former Copenhagen girls soccer coach Katherine Stackel, who serving as an assistant for the boys team this season. “When I stand in the middle of the field and look around, I keep saying ... I cannot believe this is Copenhagen. It’s amazing. I actually get choked up.”

The turf field will also allow players to condition and prepare themselves for playoff and postseason games.

“It’s nice to play on the turf, the ball moves a lot quicker,” junior Raegan Dalrymple said. “And I think our conditioning can be a lot better.”

“It’s pretty cool because last year the field wasn’t really smooth like this, the ball hit a lot of bumps and slowed you down a little bit,” Brooke Smykla said. “And now it’s all just nice and flat.”

District superintendent Scott Connell, also the school’s athletic director, said the vision for building a new athletic facility was years in the making.

“Every district that touches us has turf,” Connell said. “South Jeff, which is our neighbor to the south and touches our district, they have it. Watertown is to the west, Beaver River and Carthage are to the north and Lowville is to the east, and everyone around us has turf.

“And our feeling was ‘yeah, we’re small, but why can’t our kids have the same thing that their kids have? Why does size dictate if you can have nice things or not?”

The new turf field is part of a larger school project at Copenhagen, Connell said.

“We’ve been looking to do this for quite some time,” he said. “You just have to be able to work a field into another part of a building project ... so we’re doing a lot of different things in the school, we have LED lighting throughout the entire school. We have a new freezer/cooler set up for our cafeteria, new flooring in our music rooms, we needed a new front door, as well as new bleachers in the gym, there’s a lot of other things going on in the building and the field is just one part of a large project.”

The new venue should also allow spring sports of baseball and softball a chance to get out on the field for practices and games much earlier than before.

“Being on the foothills of the Tug Hill, I’ve been here 39 years and I can remember maybe once that we played a baseball game here before spring break and that’s usually the second week of April,” Connell said. “So we were generally in the gym for four to five weeks before we got out on a field.”

Home plate is already in place on the baseball field, months before the season.

“It’s awesome, your dream as a baseball player is to play on turf,” said Powis, who also plays shortstop on the baseball team.

Two scoreboards are set to be installed, one for the baseball field and one for softball, and both can be used during soccer games. Also on the way is a concession stand, as well as restrooms as the perimeter of the field remains a work in progress.

“We’re fortunate, Scott Connell puts his blood and tears into making all of this possible, and he’s going to make sure it’s perfect before anything gets finalized,” Charity Smykla said.

Copenhagen owns a storied soccer history with numerous Frontier League titles in the “D” Division, as well as Section 3 titles and success at the state level.

“The girls program has three state titles, everybody who played on these teams seems to be related to some of them, some how,” Charity Smykla said. “You can ask any of the kids on this team, ‘who’s on the state team from ‘93?’ They’re going to know. ... And whether they played on a state title team or not, they’re really proud to be wearing a Copenhagen jersey.”

The boys team last captured a Section 3 crown in 2014, advancing to a state semifinal in Class D in Middletown.

Copenhagen also has hosted special events held around its home soccer games, such as cancer awareness events on Pink Out Night, and other gatherings.

“I think that anyone that went to Copenhagen and graduated from here and played at Copenhagen as a soccer player, it’s like a sense of religion,” Charity Smykla said. “We talk about it, the local diner talks about it, it’s something that everybody in a small community has something in common with.

“I have devoted my life to Copenhagen athletics and nothing compares to the feeling of pride in this project,” said Stackel, who coached the Copenhagen girls team for 17 seasons, including during their state title run in 2015. “I am very lucky to be a part of this season.”

With the updated venue, the Golden Knights could experience a new tradition centering around their games.

“I think it’s like saying goodbye to the legacy of the old field,” Charity Smykla added. “So many of us have played here in the past, that this is like beginning a new chapter here.”